Type of aircraft:
Airbus A319
Operator:

Registration:
B-6425
Flight Phase:
Takeoff (climb)
Flight Type:
Scheduled Revenue Flight
Survivors:
Yes
Site:
Airport (less than 10 km from airport)
Schedule:
Chongqing – Nyingchi
MSN:
5157
YOM:
2012
Flight number:
TV9833
Location:
Chongqing-Jiangbei
Sichuan
Country:
China
Region:
Asia
Crew on board:
9
Crew fatalities:
Pax on board:
113
Pax fatalities:
Other fatalities:
Total fatalities:
0
Circumstances:
The airplane was departing Chongqing-Jiangbei Airport on a regular schedule service to Nyingchi, Tibet, carrying 113 passengers and a crew of nine. During the takeoff run from runway 03, the captain encountered an unexpected situation and decided to abandon the takeoff procedure. He initiated an emergency braking manoeuvre when the airplane started to deviate to the left. It veered off runway, went through a grassy area, lost its undercarriage and both engines before coming to rest on a parallel taxiway, bursting into flames. 36 occupants were injured while all others evacuated safely. The aircraft was destroyed. 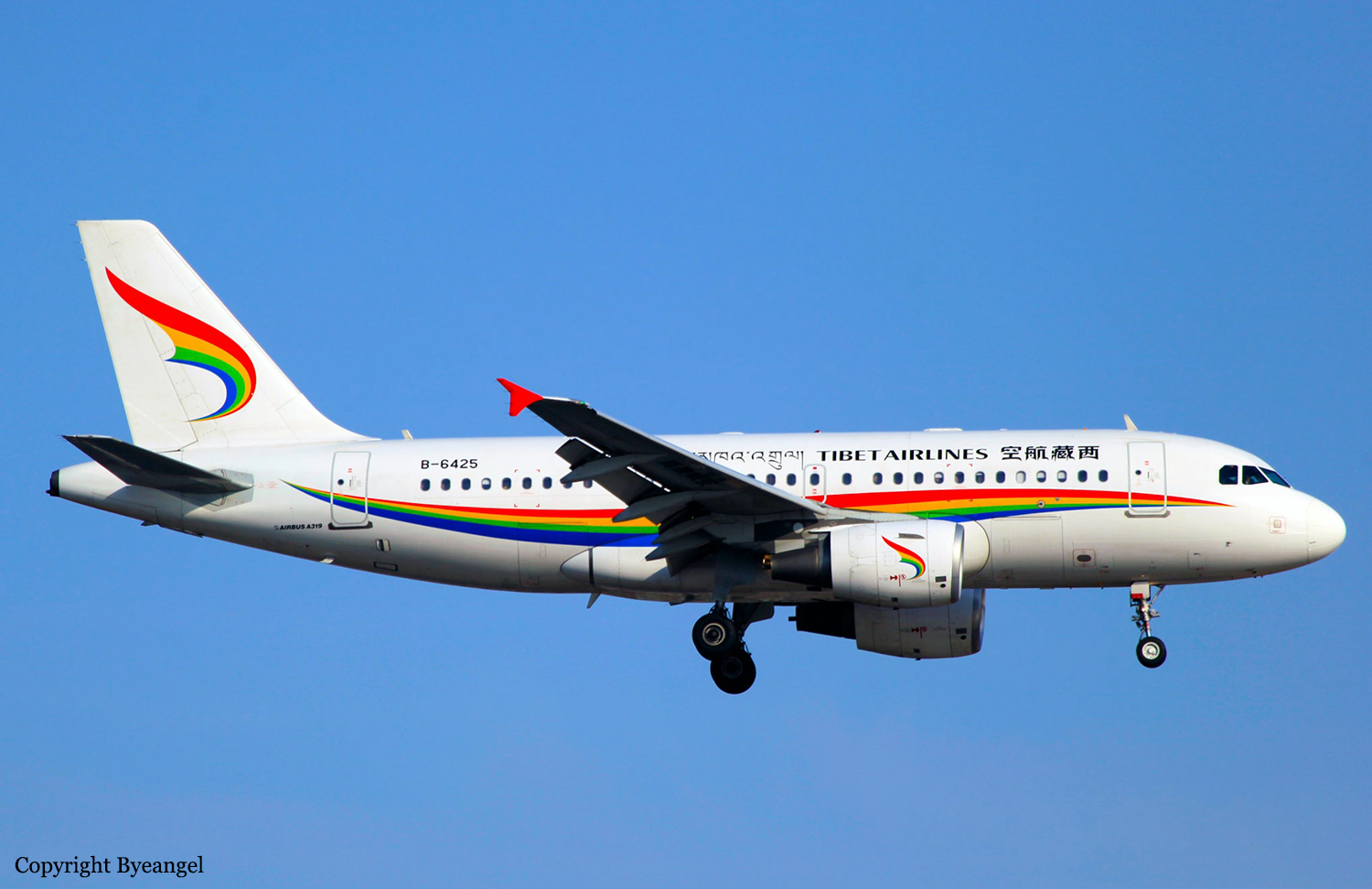 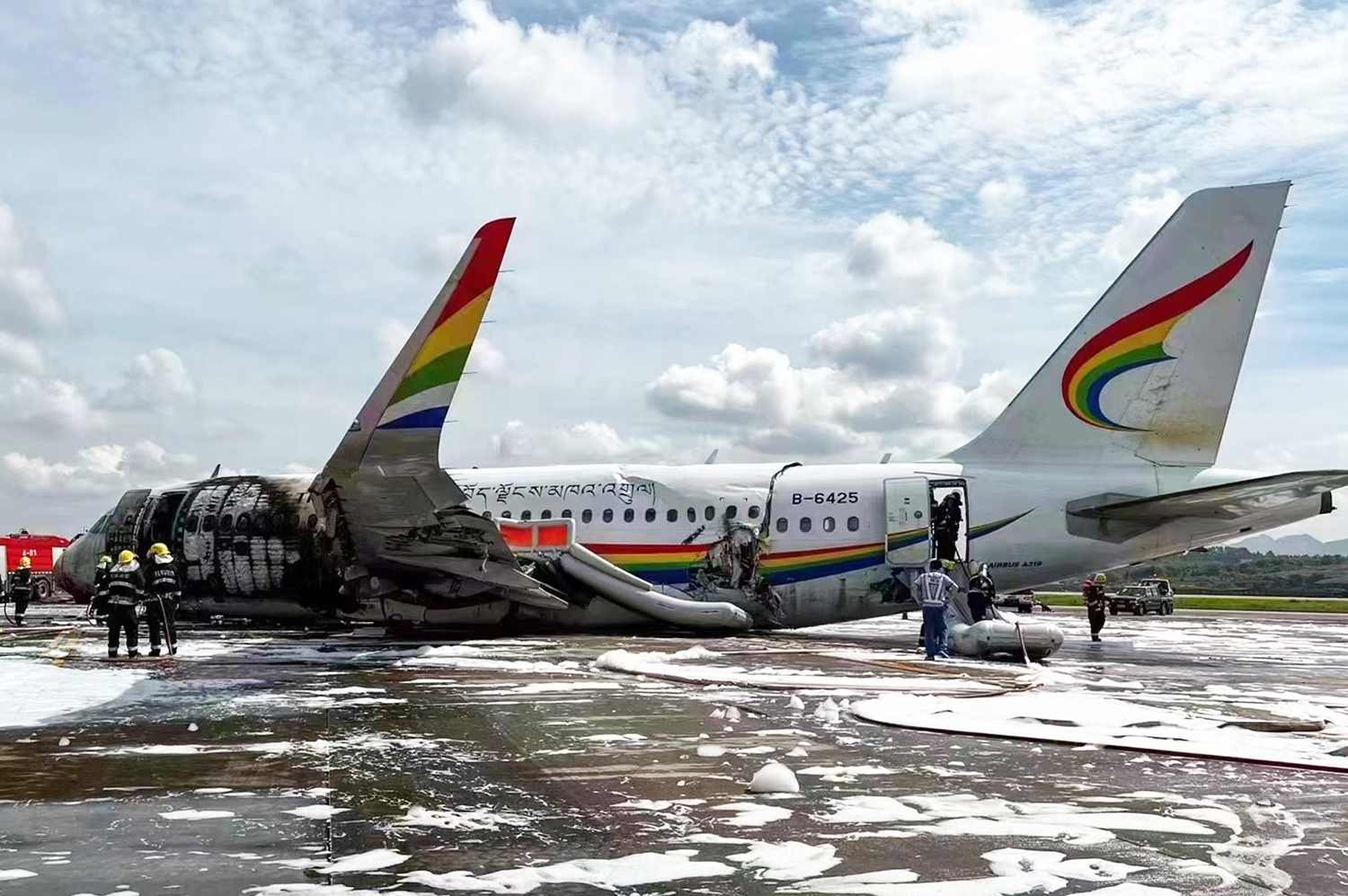 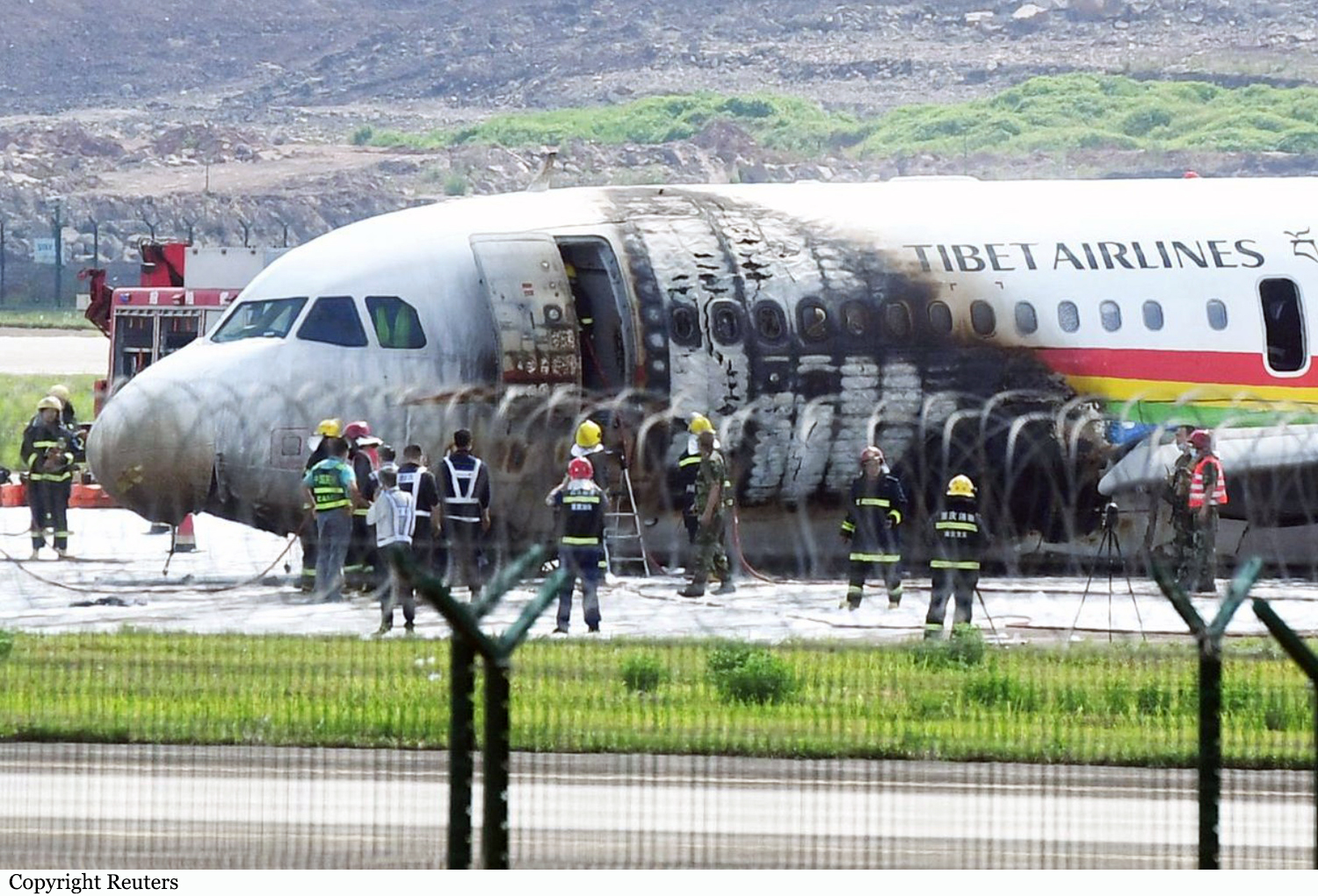 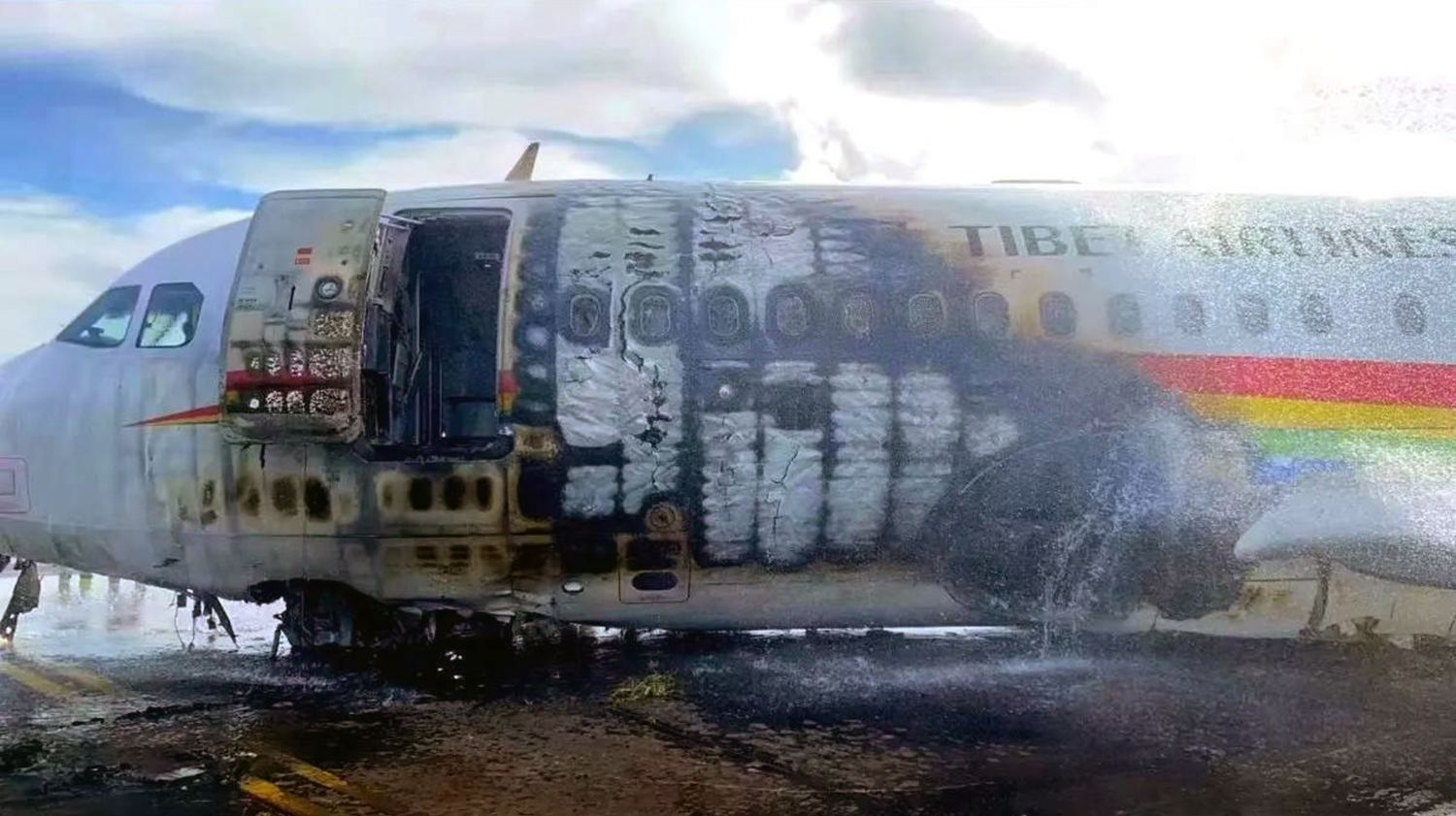 Registration:
B-1791
Flight Phase:
Flight
Flight Type:
Scheduled Revenue Flight
Survivors:
No
Site:
Mountains
Schedule:
Kunming - Guangzhou
MSN:
41474/5433
YOM:
2015
Flight number:
MU5735
Location:
Wuzhou
Guangxi
Country:
China
Region:
Asia
Crew on board:
9
Crew fatalities:
Pax on board:
123
Pax fatalities:
Other fatalities:
Total fatalities:
132
Captain / Total flying hours:
6709
Copilot / Total flying hours:
31769
Aircraft flight hours:
18239
Aircraft flight cycles:
8986
Circumstances:
The airplane departed Kunming-Wujiaba Airport at 1315LT on a schedule service (flight MU5735) to Guangzhou, carrying 123 passengers and a crew of nine. At 1420LT, while cruising at an altitude of 29,100 feet, the aircraft entered an uncontrolled descent until 7,400 feet then climbed to 8,600 feet. It finally entered a steep descent and crashed almost two minutes later in a vertical attitude on hilly and wooded terrain located southwest of Wuzhou. The aircraft disintegrated on impact and all 132 occupants were killed. Two days after the accident, the CVR was found while the DFDR was found on March 27. 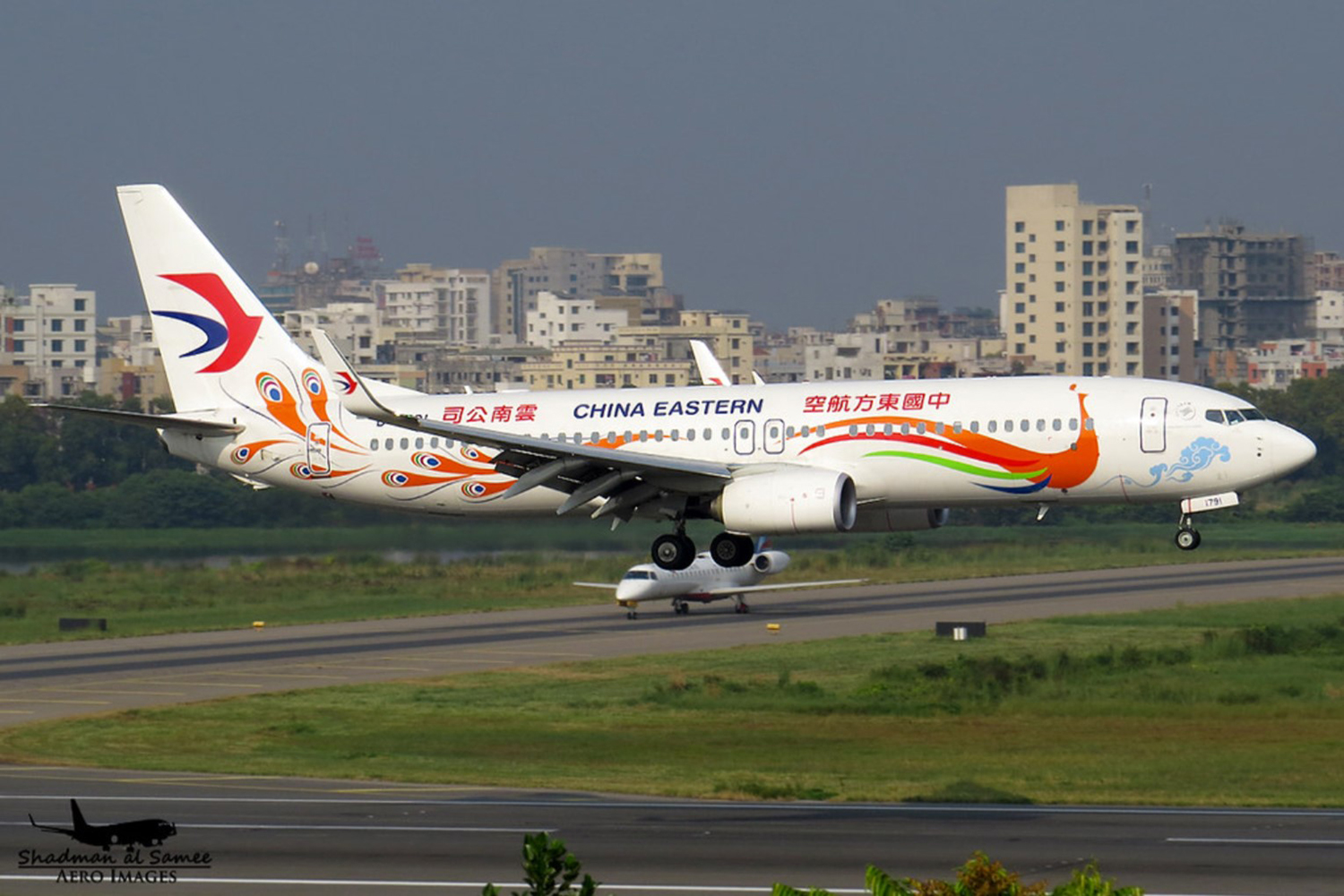 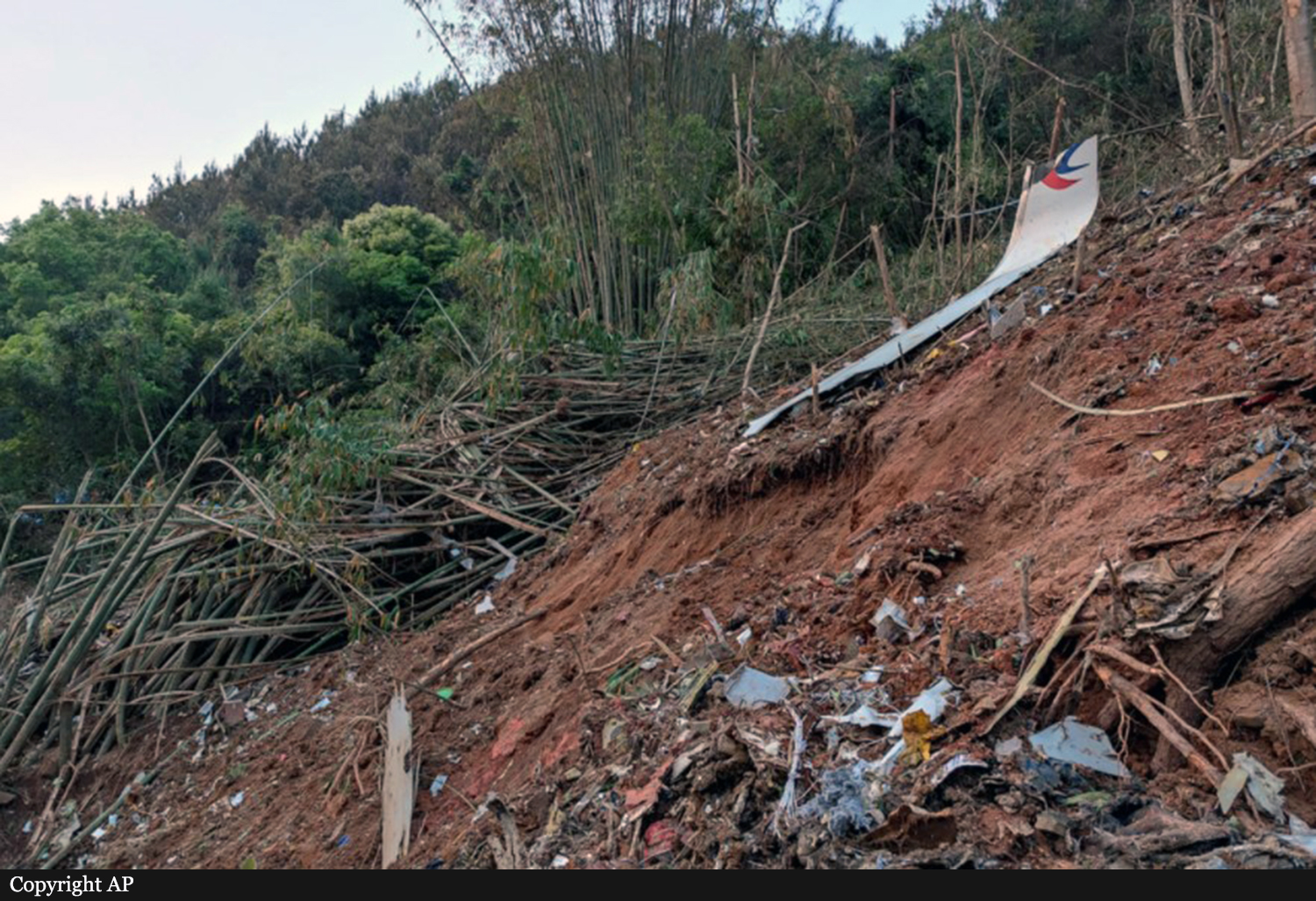 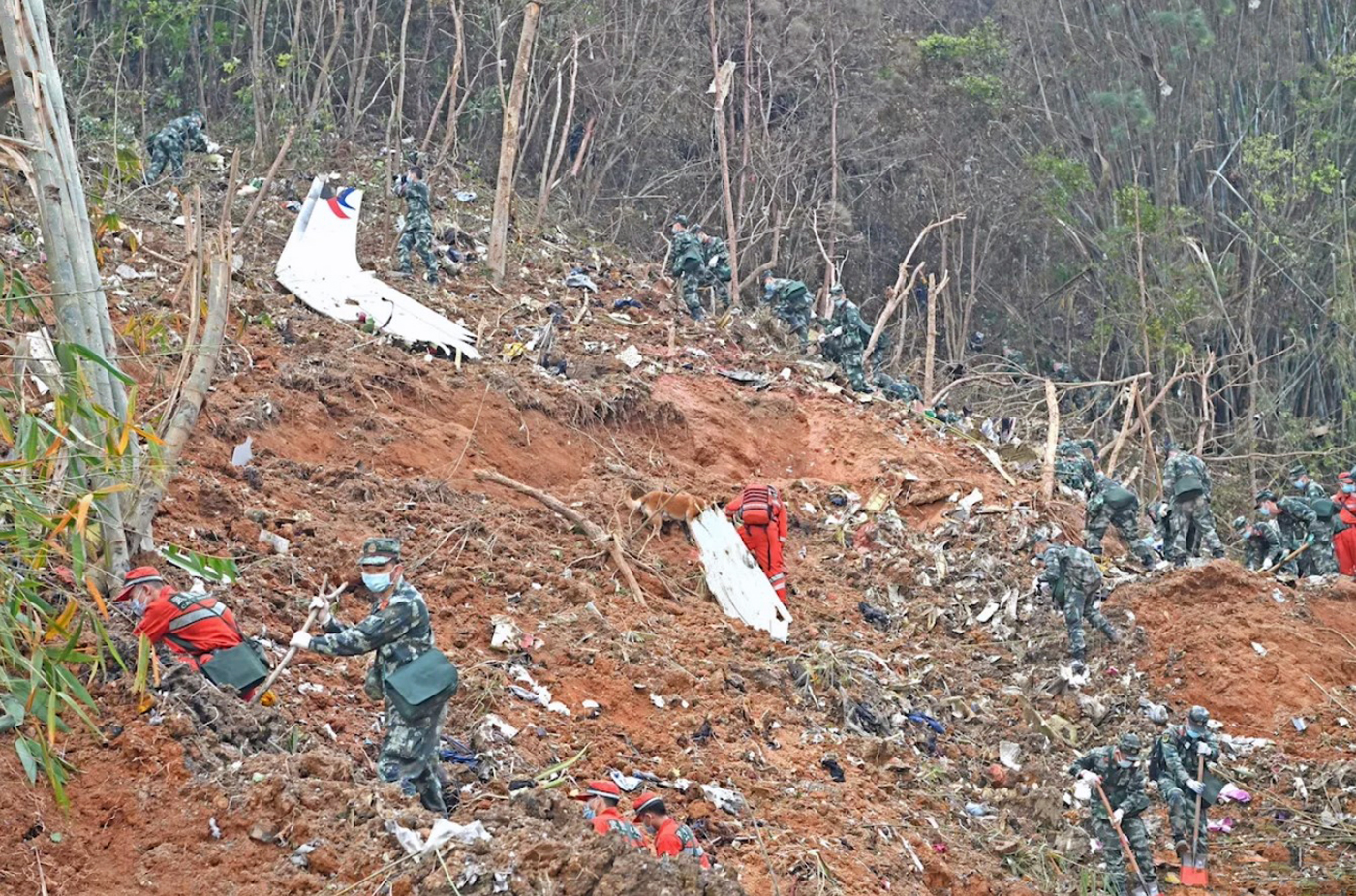 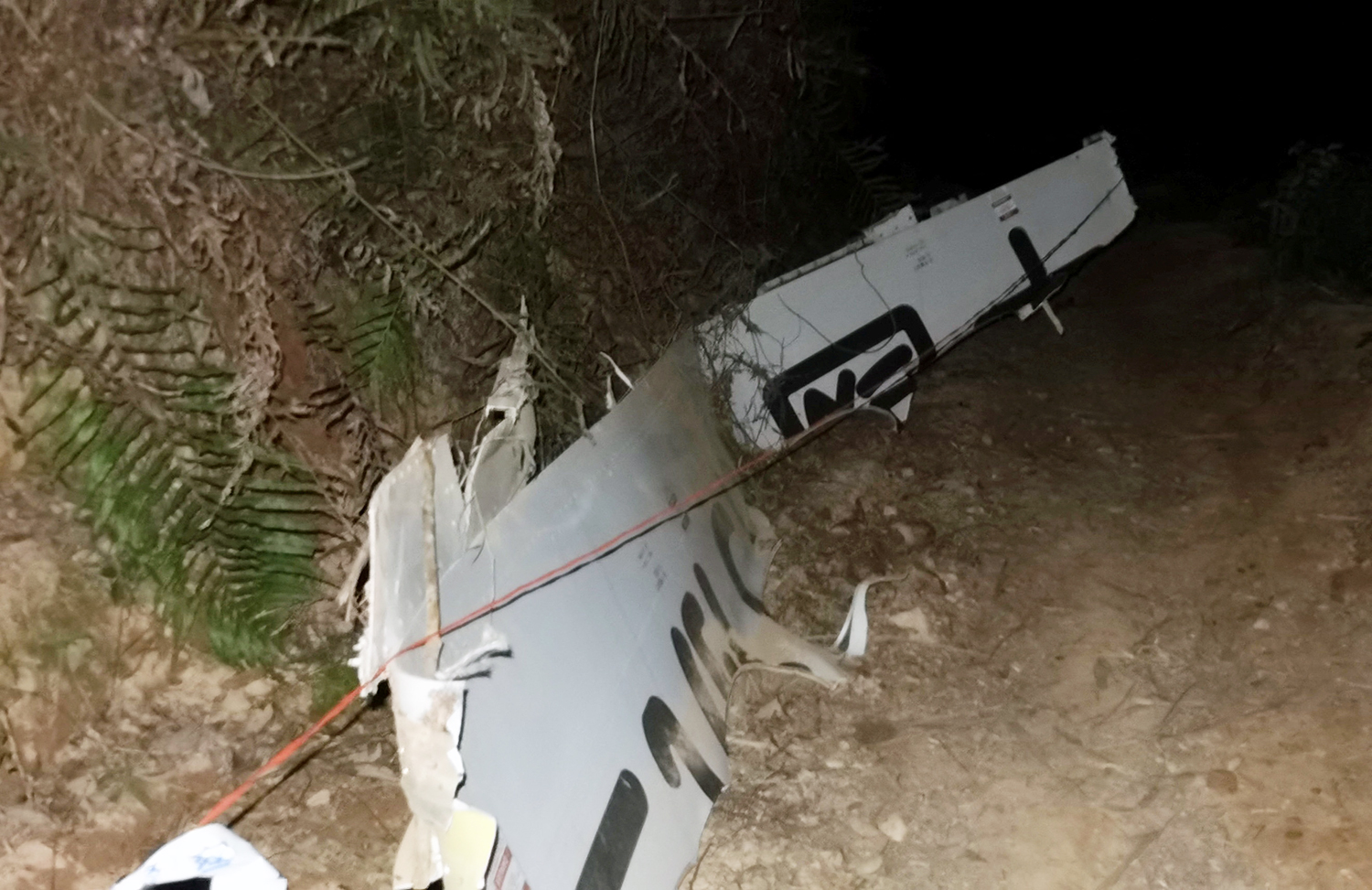 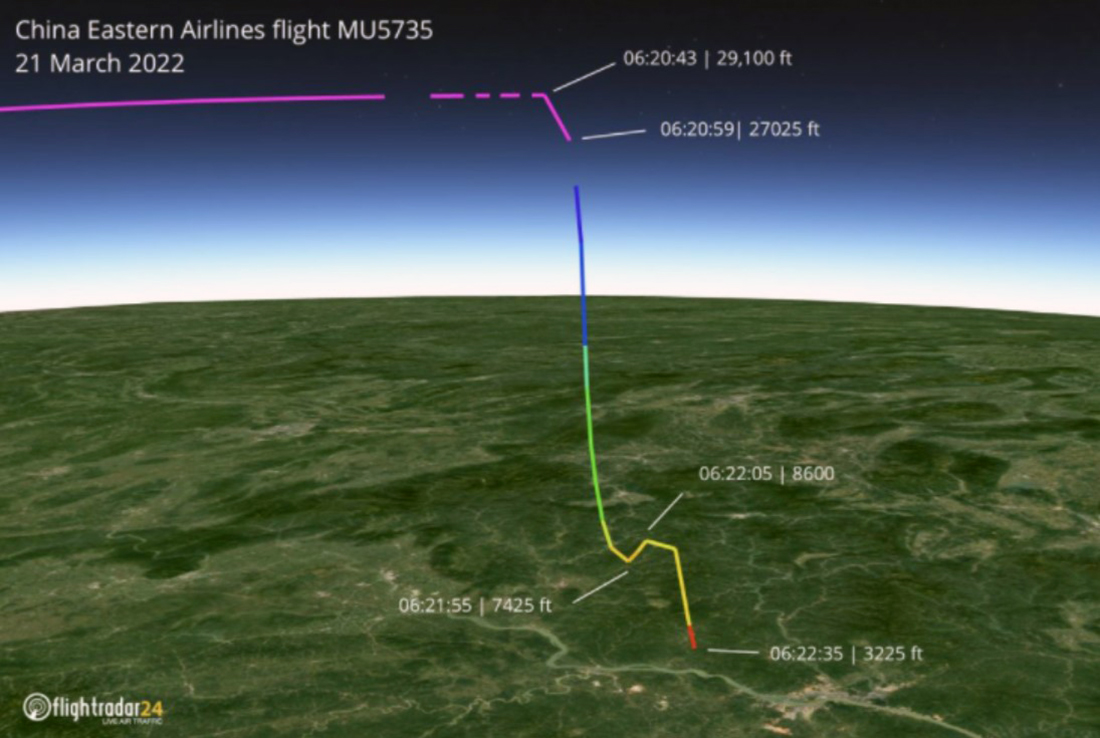 Crash of a Cessna 208B Grand Caravan off Mohéli: 14 killed 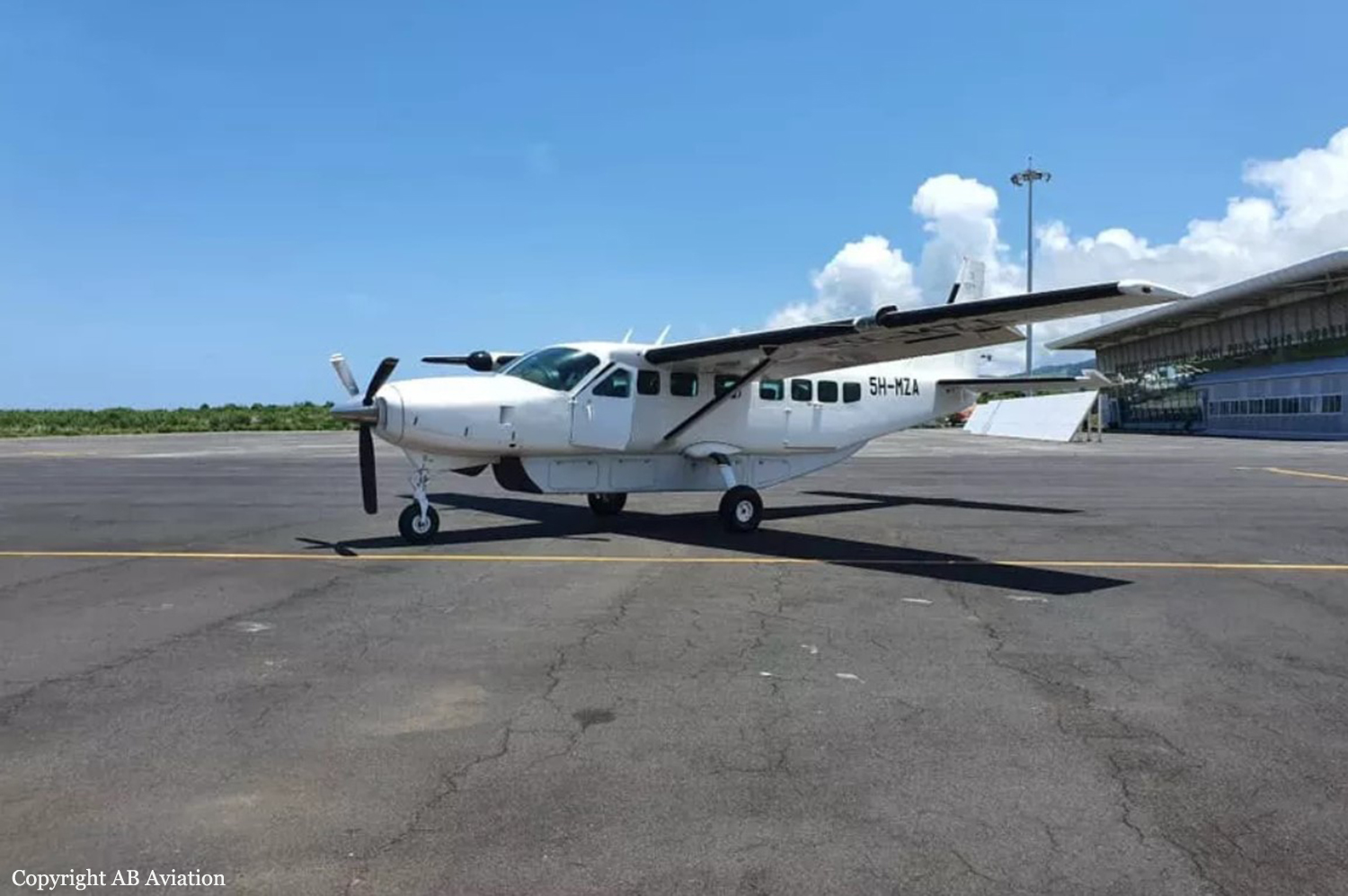 Crash of a Britten-Norman BN-2A-9 Islander in Culebra 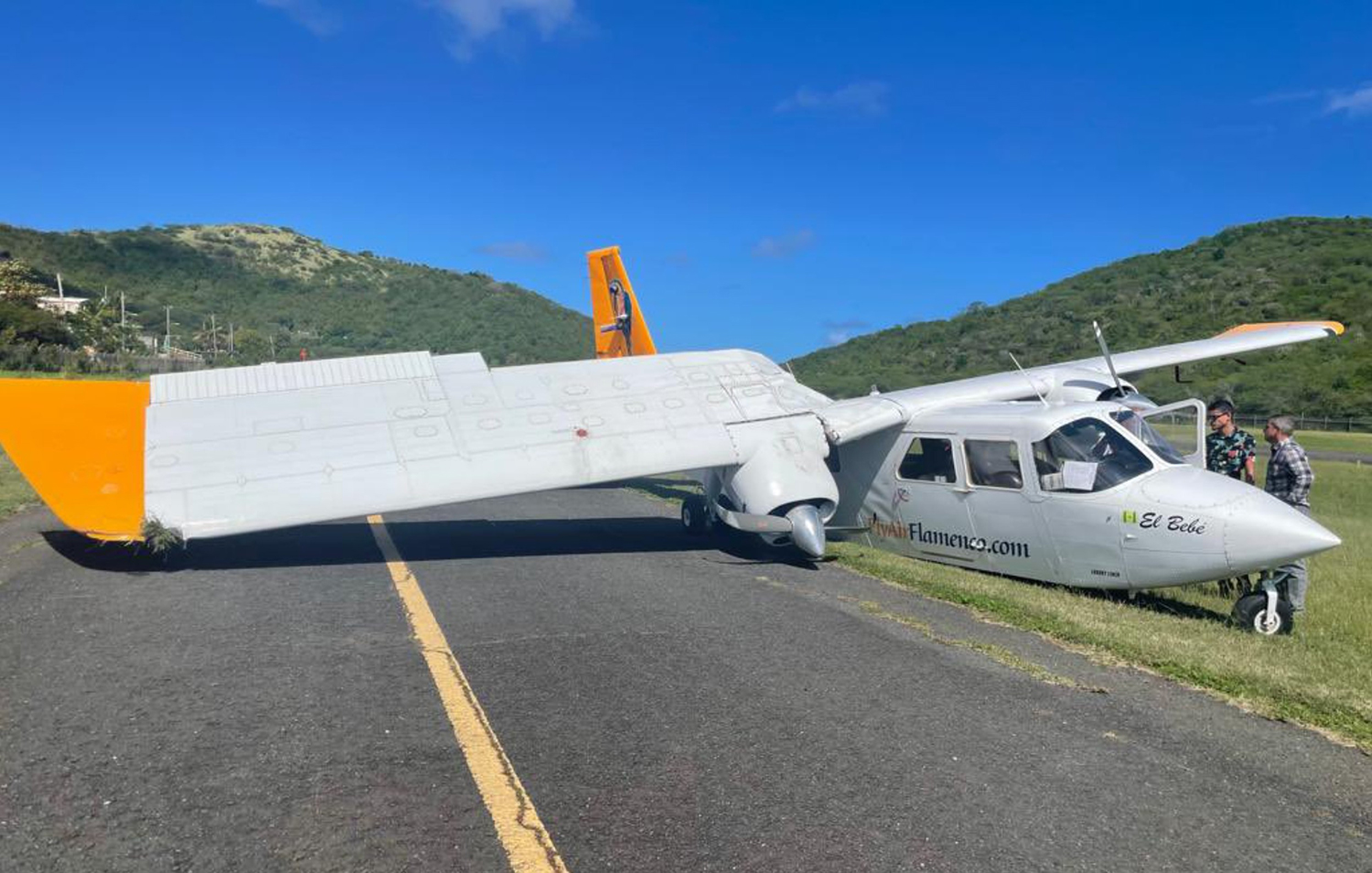 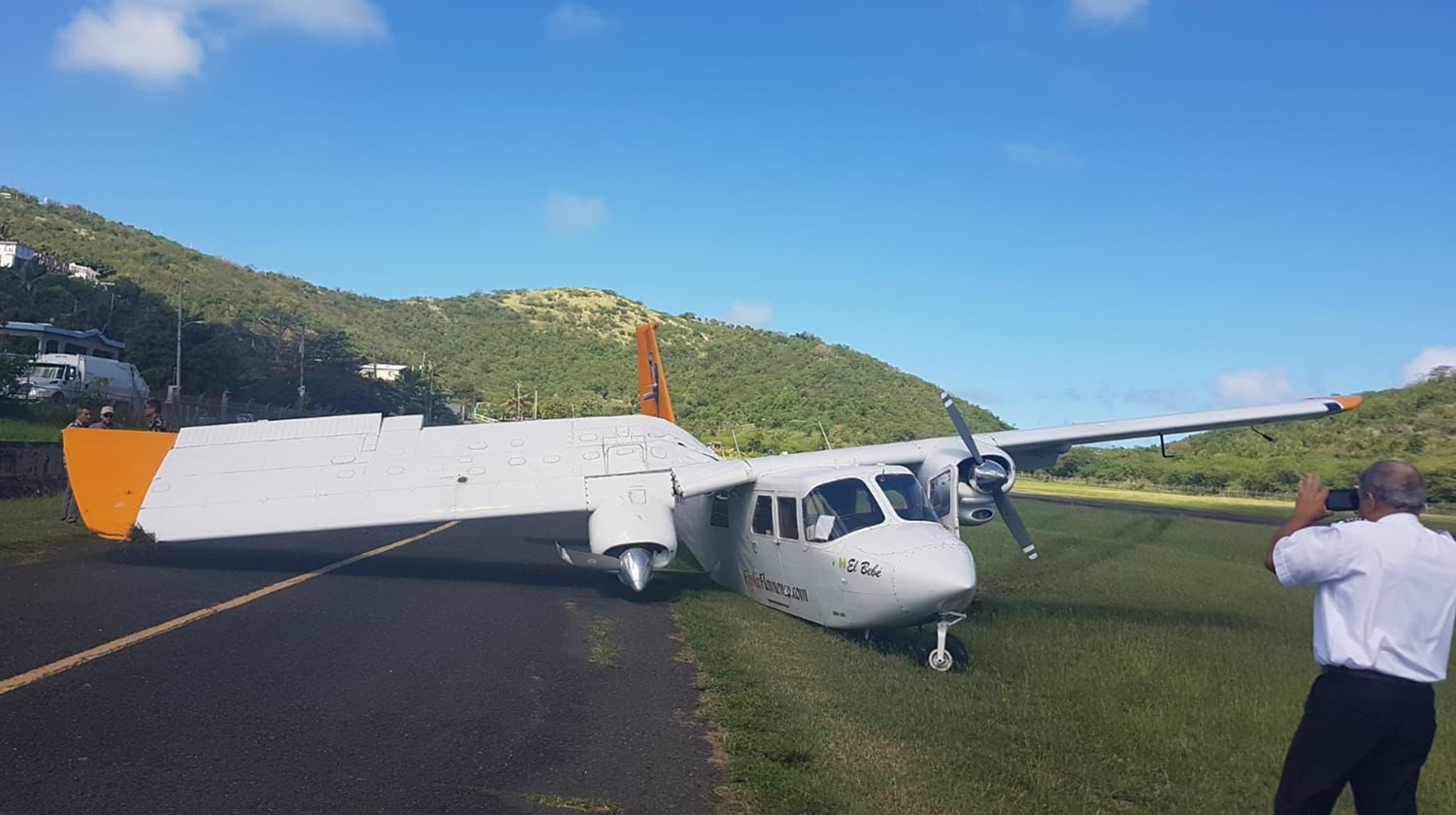 Crash of a Cessna 207 Stationair 8 in Bethel

Registration:
N9794M
Flight Phase:
Landing (descent or approach)
Flight Type:
Scheduled Revenue Flight
Survivors:
Yes
Site:
Airport (less than 10 km from airport)
Schedule:
Bethel – Kwethluk
MSN:
207-0730
YOM:
1981
Location:
Bethel
Alaska
Country:
United States of America
Region:
North America
Crew on board:
1
Crew fatalities:
Pax on board:
5
Pax fatalities:
Other fatalities:
Total fatalities:
0
Circumstances:
On November 20, 2021, about 1755 Alaska standard time, a Cessna 207 airplane, N9794M sustained substantial damage when it was involved in an accident at the Bethel Airport, Bethel, Alaska. The pilot and five passengers were not injured. The airplane was operated by the pilot as a Title 14 Code of Federal Regulations Part 135 scheduled passenger flight. The purpose of the flight was to transport five passengers and cargo to Kwethluk, Alaska, which is located about 12 miles east of Bethel. The flight was operated by Yute Commuter Service as a scheduled commuter flight as flight number 700B (3). The pilot reported that shortly after departing from Bethel, he noticed that the red, ELT (Emergency Locator Transmitter) light on the instrument panel mounted, remote switch, had illuminated. The pilot then asked the Bethel tower operator if they were hearing an ELT signal, and the tower operator responded that no signal was being received. Moments later, the pilot began to smell what he describes as an electrical burn smell, and he elected to return to Bethel. The pilot said that about one minute later, the electrical burn smell intensified, which was followed by visible smoke in the cockpit, and he then declared an inflight emergency to the Bethel tower. The pilot then turned off the airplane’s master electrical switch, and subsequently opened his side window for ventilation and smoke removal. He said he briefly turned the master switch back on to again declare an emergency with Bethel tower, and to inform the tower operator that he was planning to land on Runway 1L. The pilot said that after landing, during the landing roll, he realized that the nosewheel steering system and brake system were both inoperative. After the airplane rolled to a stop on the left side of Runway 1L, he ordered all the passengers to evacuate the airplane. The pilot reported that after all the passengers had safely departed the airplane, heavy smoke filled the cockpit and passenger compartment, and he saw a candle like flame just behind the pilot and co-pilot seats, just beneath the floorboards of the airplane. Moments after all the passengers and pilot had exited the airplane, it was immediately engulfed in flames. 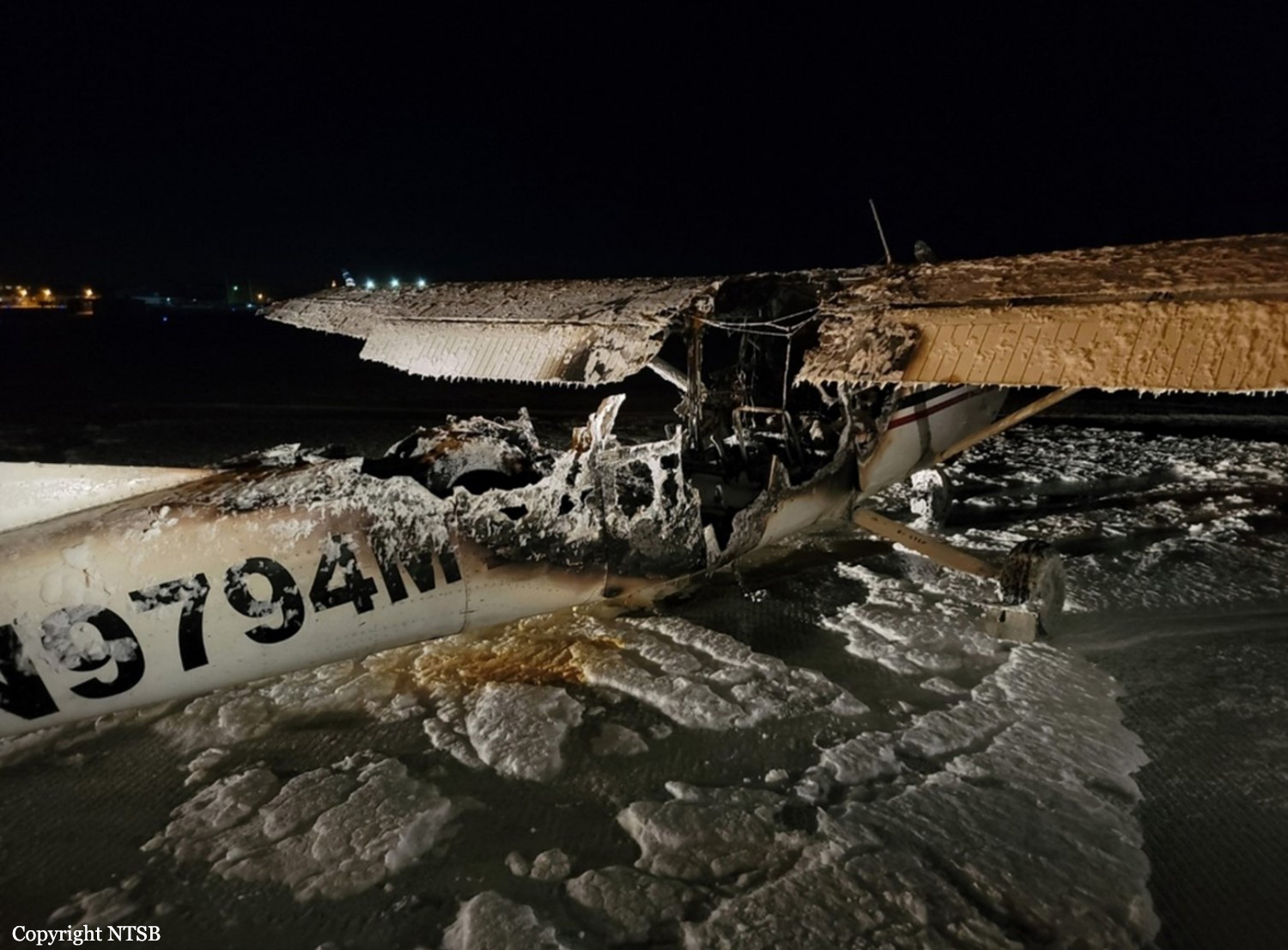 Registration:
N866JA
Flight Phase:
Landing (descent or approach)
Flight Type:
Scheduled Revenue Flight
Survivors:
Yes
Site:
Airport (less than 10 km from airport)
Schedule:
Charlevoix – Beaver Island
MSN:
185
YOM:
1970
Location:
Beaver Island
Michigan
Country:
United States of America
Region:
North America
Crew on board:
1
Crew fatalities:
Pax on board:
4
Pax fatalities:
Other fatalities:
Total fatalities:
4
Circumstances:
On November 13, 2021, at 1349 eastern standard time, a Britten Norman BN-2A airplane, N866JA, was Substantially damaged when it was involved in an accident on Beaver Island, Michigan. The pilot and three passengers were fatally injured, and one passenger received serious injuries. The airplane was operated as a Title 14 Code of Federal Regulations (CFR) Part 135 air taxi flight. The airplane departed the Charlevoix Municipal Airport (CVX), at 1332, with the pilot and 4 passengers on-board. After departing CVX, the airplane turned north and proceeded directly toward the Welke Airport (6Y8), on Beaver Island, Michigan. The enroute portion of the flight was conducted about 1500 ft. above mean sea level (msl), and the airplane remained at this altitude until the it was about 3 nautical miles (nm) from 6Y. At this point, the airplane began descending and was maneuvered toward a straight-in approach to runway 35 at 6Y8. The Automatic Dependent Surveillance-Broadcast (ADS-B) data ended about 0.24 nm south of the accident site. The airplane impacted the ground about 110 ft east of the extended centerline of runway 35, and 320 ft south of the runway threshold. The turf runway was 3.500 ft long and had a displaced threshold just beyond its intersection with paved runway 9/27. Impact signatures indicated that the airplane struck the ground in a left wing low, nose low attitude. The front of the fuselage was crushed upward and aft. All major components of the airplane were located at the accident scene. Flight control continuity was established from the cockpit controls to each respective control surface except for cuts made by first responders for occupant extraction. Engine control continuity was established from the cockpit to each engine except for cuts made by first responders for occupant extraction. The wing flaps were found in an extended position. 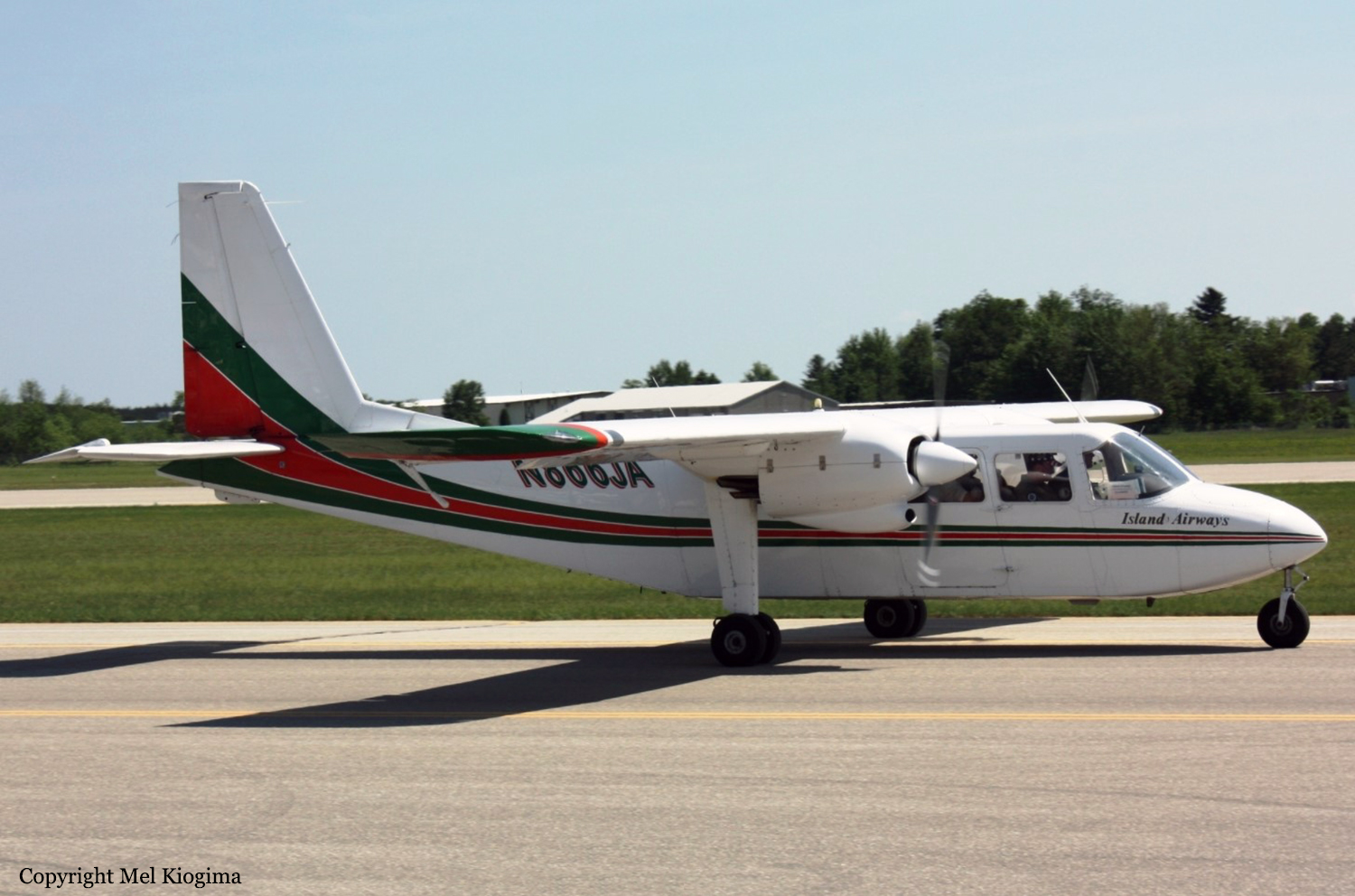 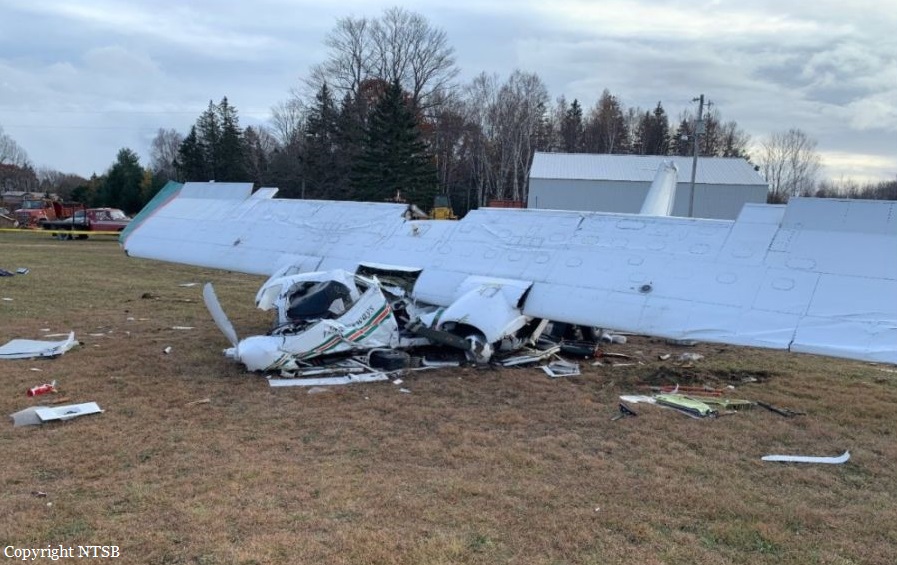 Crash of a Britten Norman BN-2B-26 Islander in Montserrat 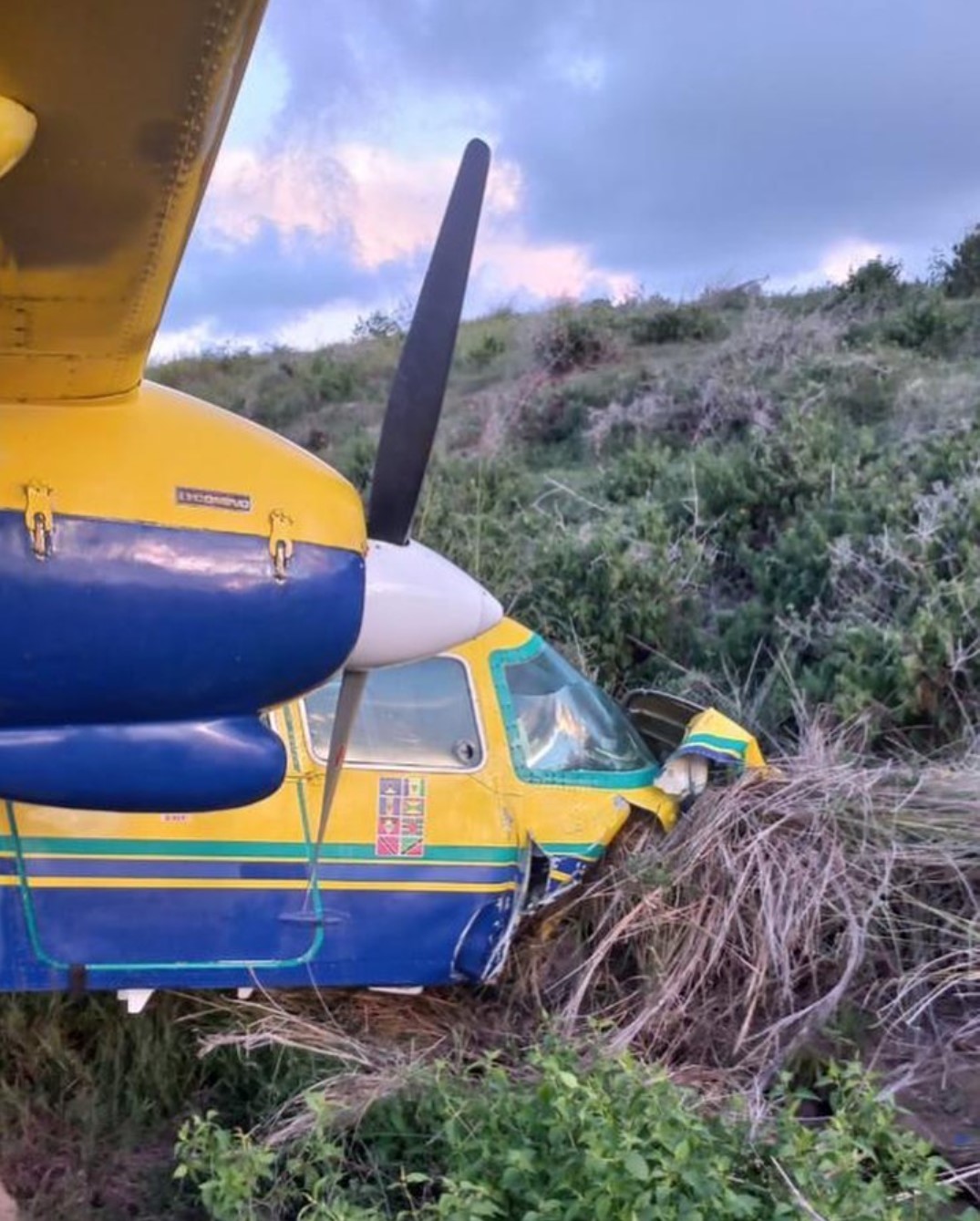 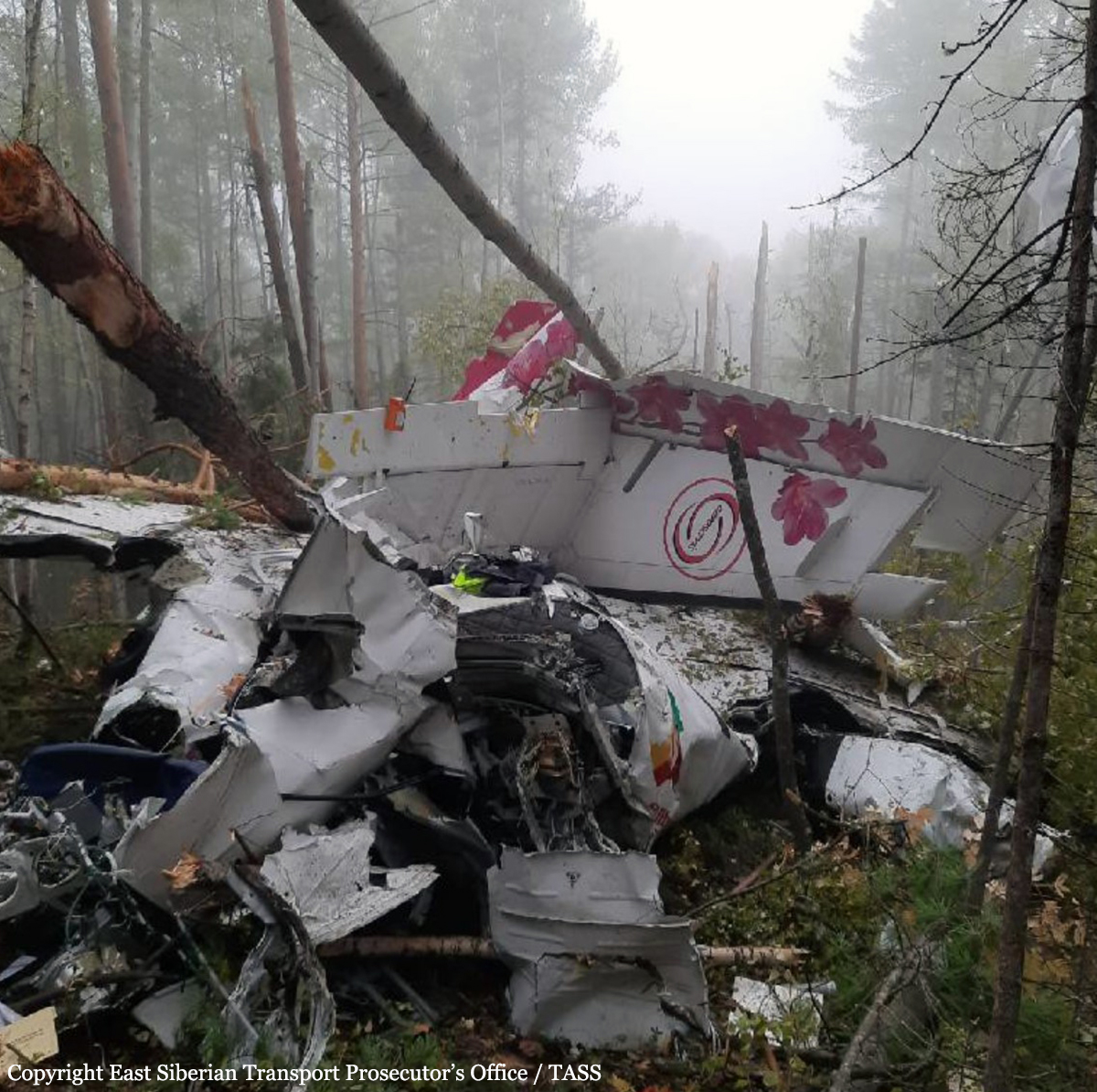 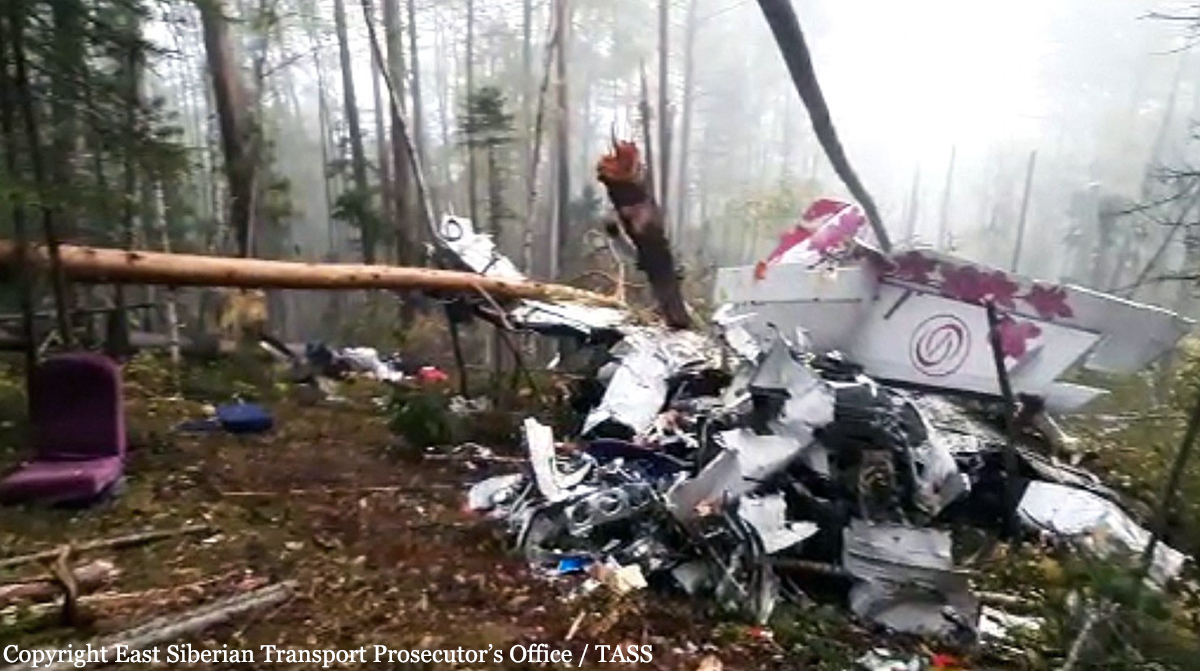 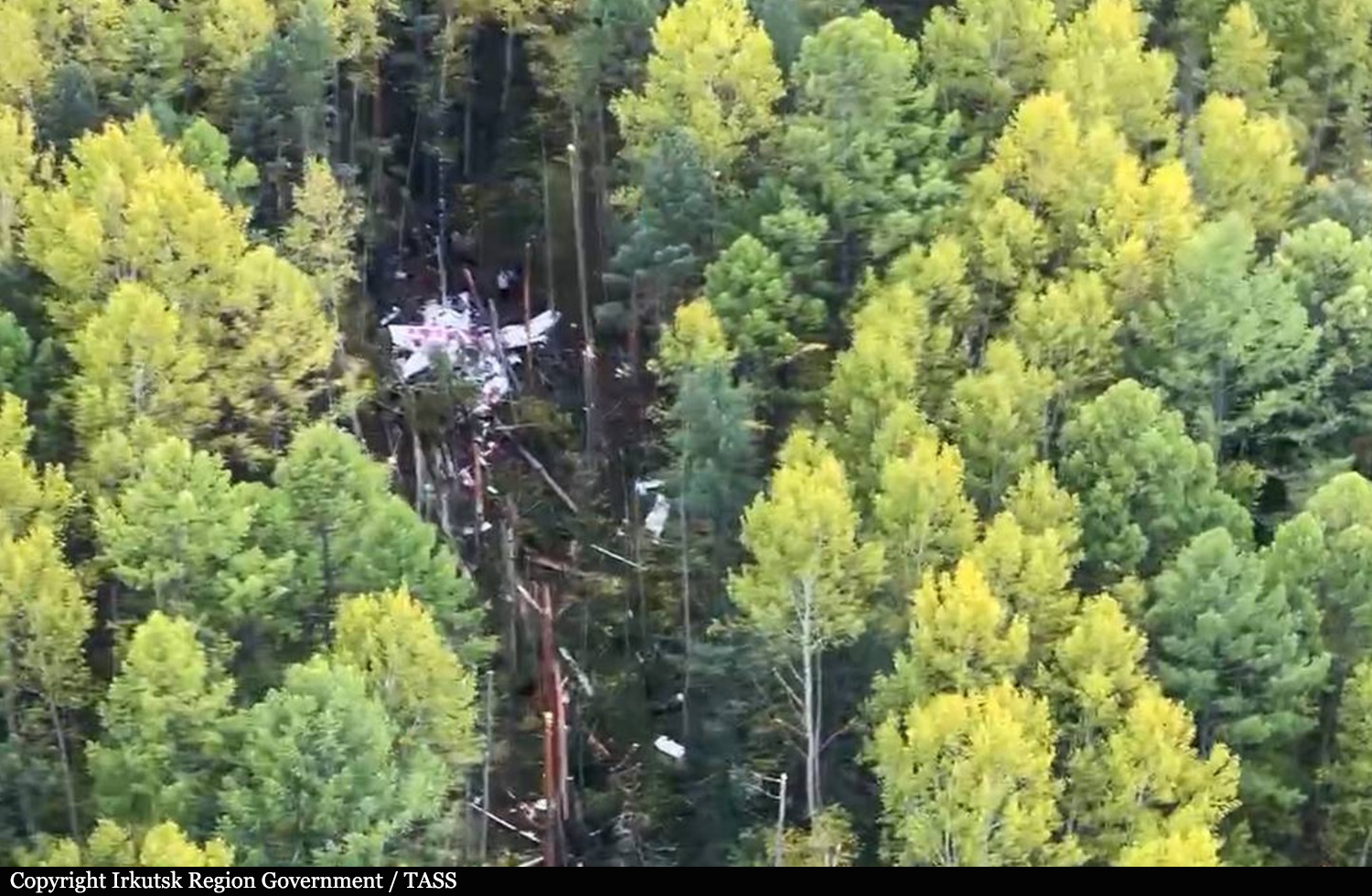 Crash of a Cessna 402C in Provincetown

Registration:
N88833
Flight Phase:
Landing (descent or approach)
Flight Type:
Scheduled Revenue Flight
Survivors:
Yes
Site:
Airport (less than 10 km from airport)
Schedule:
Boston – Provincetown
MSN:
402C-0265
YOM:
1979
Flight number:
9K2072
Location:
Provincetown
Massachusetts
Country:
United States of America
Region:
North America
Crew on board:
1
Crew fatalities:
Pax on board:
6
Pax fatalities:
Other fatalities:
Total fatalities:
0
Circumstances:
On September 9, 2021, about 1527 eastern daylight time, a Cessna 402, N88833, was substantially damaged when it was involved in an accident near Provincetown, Massachusetts. The pilot and the six passengers were seriously injured. The airplane was operated under the provisions of Title 14 Code of Federal Regulations Part 135 as a scheduled passenger flight. The flight was being operated by Cape Air (flight 2072) and was on an instrument flight rules flight plan from Boston-Logan International Airport (BOS), Boston, Massachusetts to Provincetown Municipal Airport (PVC), Provincetown, Massachusetts. The flight departed BOS about 1504. The pilot was cleared by air traffic control for the ILS RWY 7 instrument approach procedure into PVC. Another Cape Air pilot was holding short of runway 25, waiting for the accident airplane to land. He said the captain of accident airplane contacted him over the airport’s common traffic advisory frequency to ask if the airport lights were on. The pilot holding short responded that the lights were on, that the visibility had improved, and that the rain was subsiding. The pilot holding short first saw the accident airplane after it had landed and was about halfway down the 3,502-ft-long runway. As the airplane got closer to his position, he could tell that it was traveling “a little faster than it should be.” The pilot could not estimate the airplane’s speed, but it was traveling faster than he would have expected, and he knew it would not have room to stop on the remaining runway. The airplane then took off and entered a slow climb. The pilot holding short said the attitude of the airplane appeared normal, but it was climbing slower than he thought it should. The airplane cleared the localizer antennas at the far end of the runway, then the perimeter fence, before it struck trees. The airplane disappeared into the trees, and he then saw a ball of flames. A preliminary review of airport surveillance video revealed it was raining heavily at the time the accident airplane landed. As the airplane touched down on the runway, a splash of water was observed. During the landing rollout, as the airplane passed the airport’s windsock, the windsock’s movement was consistent with the airplane landing with a tailwind. The airplane then began to climb as it neared the end of the runway. The airplane entered a shallow climb and collided with trees. The airplane disappeared into the trees and shortly after a large fireball was observed. Examination of the accident site revealed that the airplane came to rest upright approximately 200 ft from its initial contact with the trees. A postimpact fire consumed portions of the left and right wings. All major components of the airplane were accounted for at the accident site. The airplane was retained for further examination. The pilot held an airline transport pilot certificate with a rating for airplane multiengine land. He also held a commercial pilot certificate with a rating for airplane single engine land. In addition, the pilot held a flight instructor certificate with ratings for single and multiengine airplanes, and instrument airplane. His most-recent Federal Aviation Administration firstclass medical certificate was issued on April 2, 2021. The pilot reported a total of 17,617 flight hours, of which, 10,000 hours were in the Cessna 402. The weather conditions reported at PVC at 1537 included wind from 210 degrees at 10 knots, visibility 3 miles in heavy rain and mist, few clouds at 200 ft, an overcast ceiling at 500 ft, temperature 21 degrees C, dewpoint 21 degrees C, and a barometric altimeter setting of 29.79 inches of mercury. 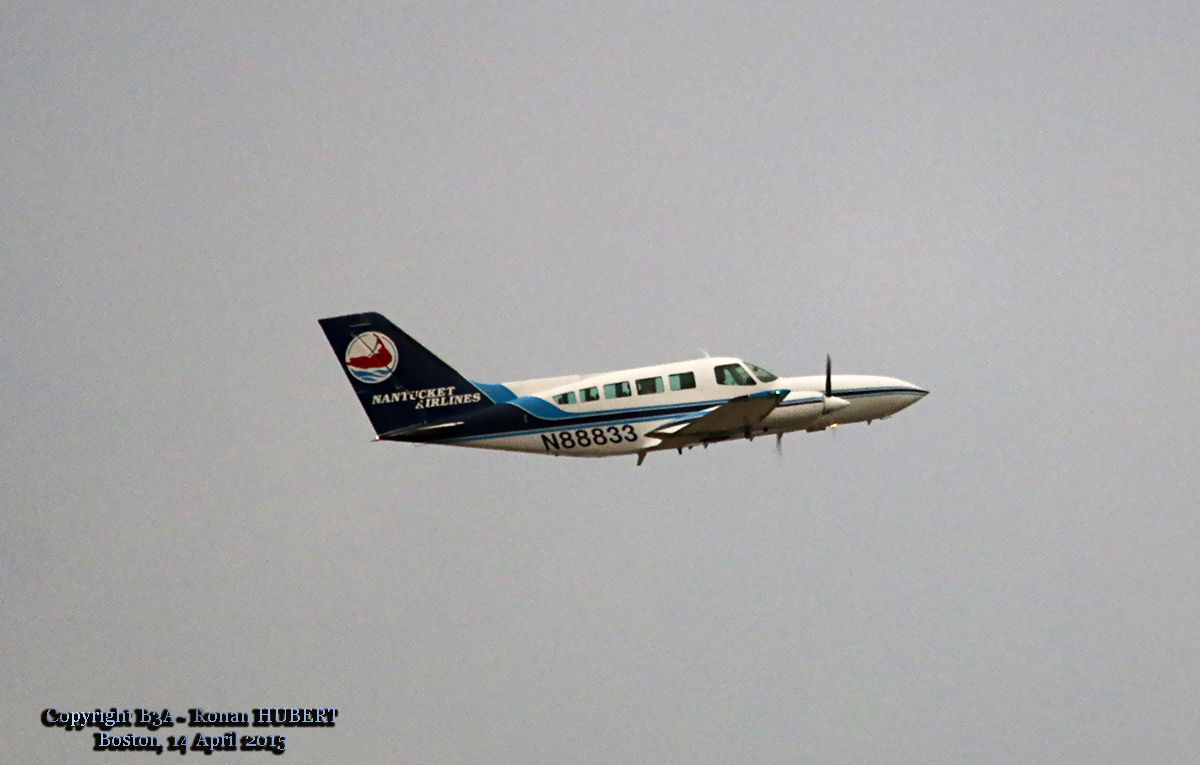 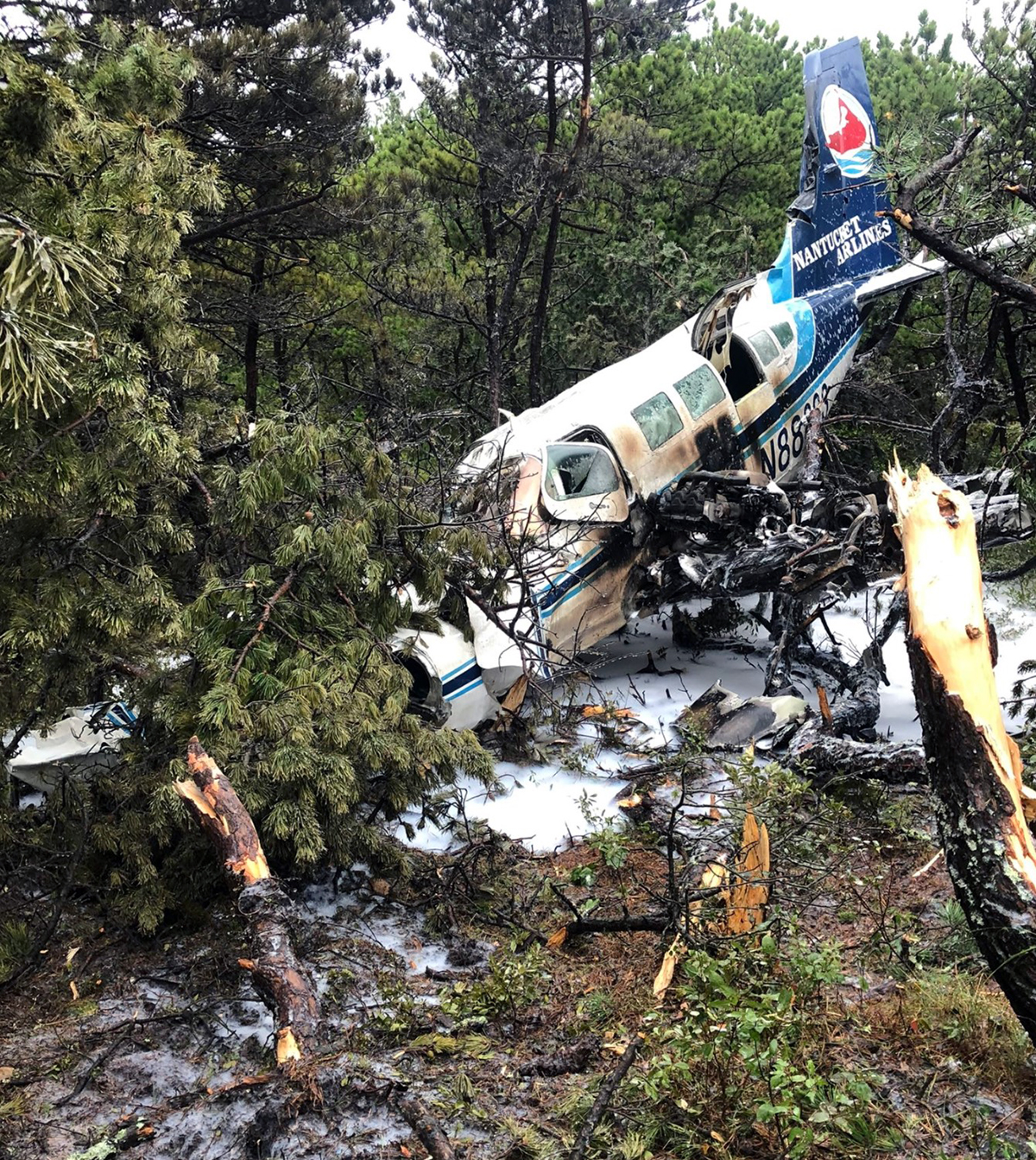 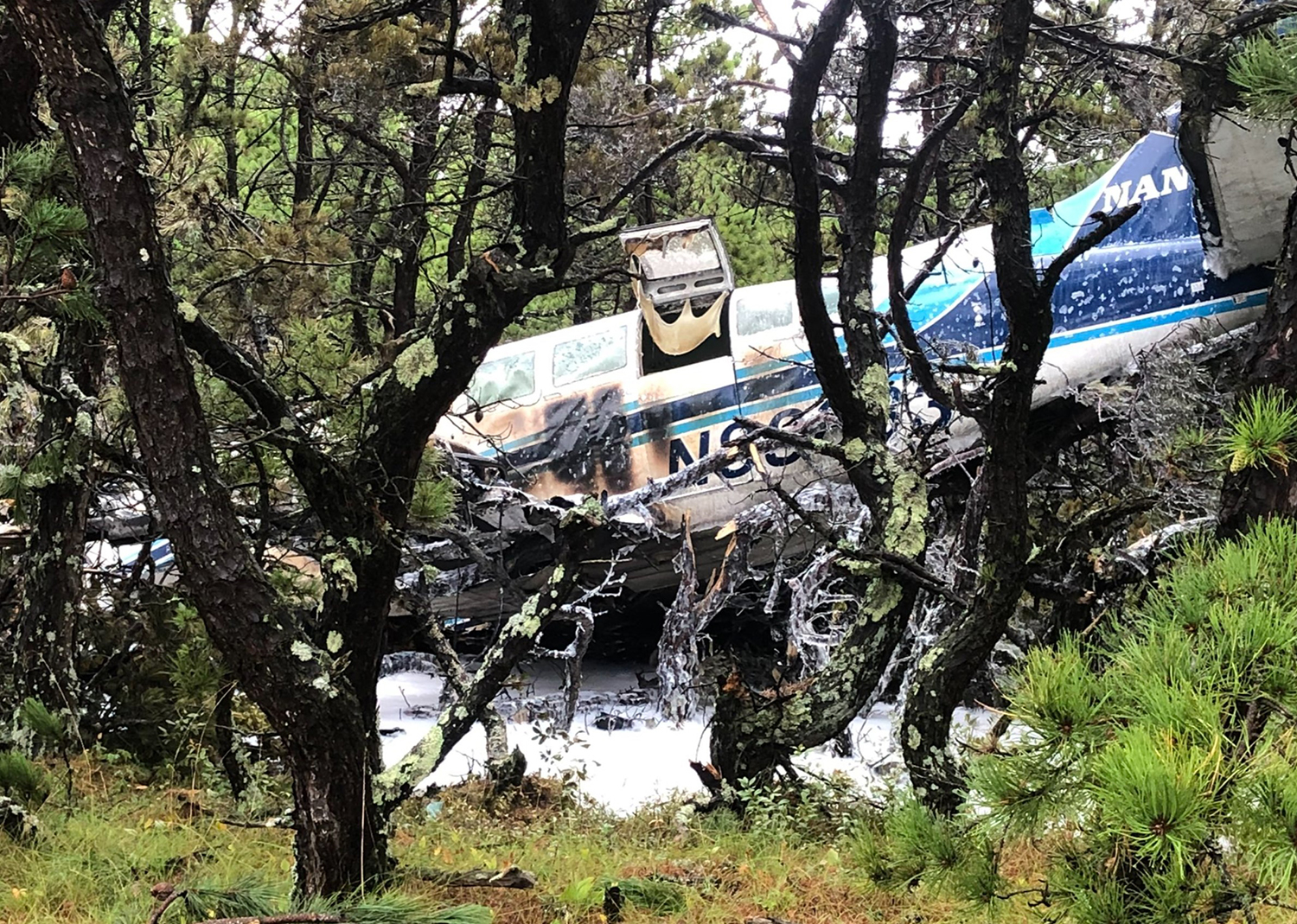 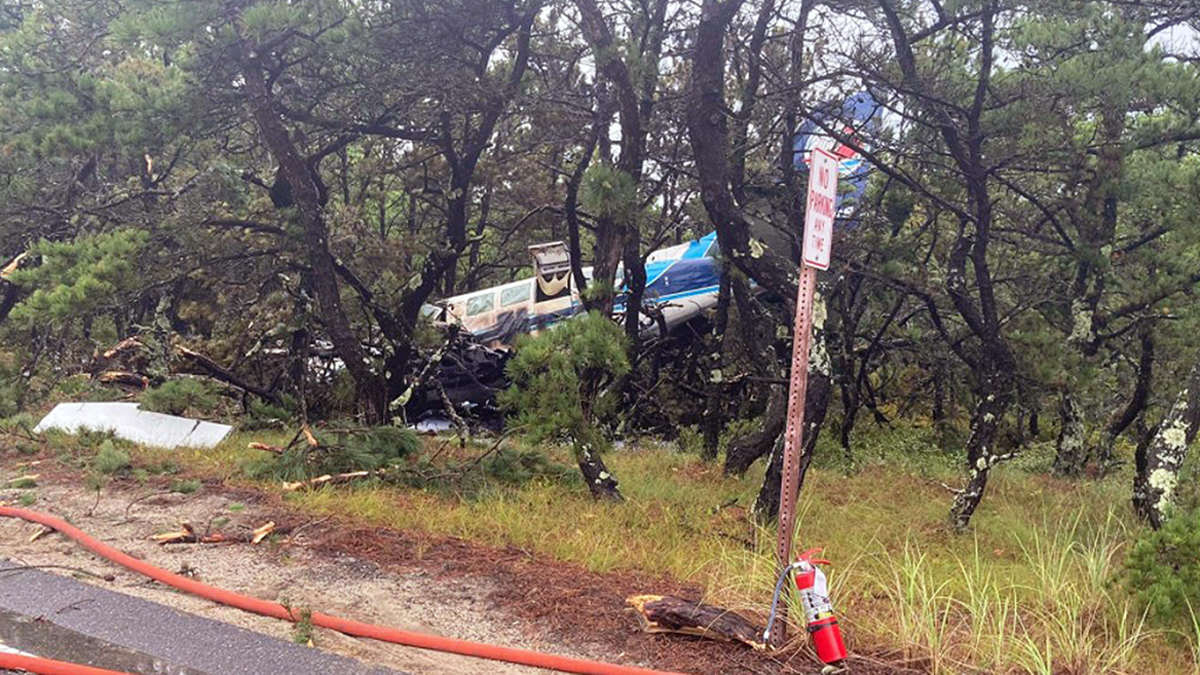 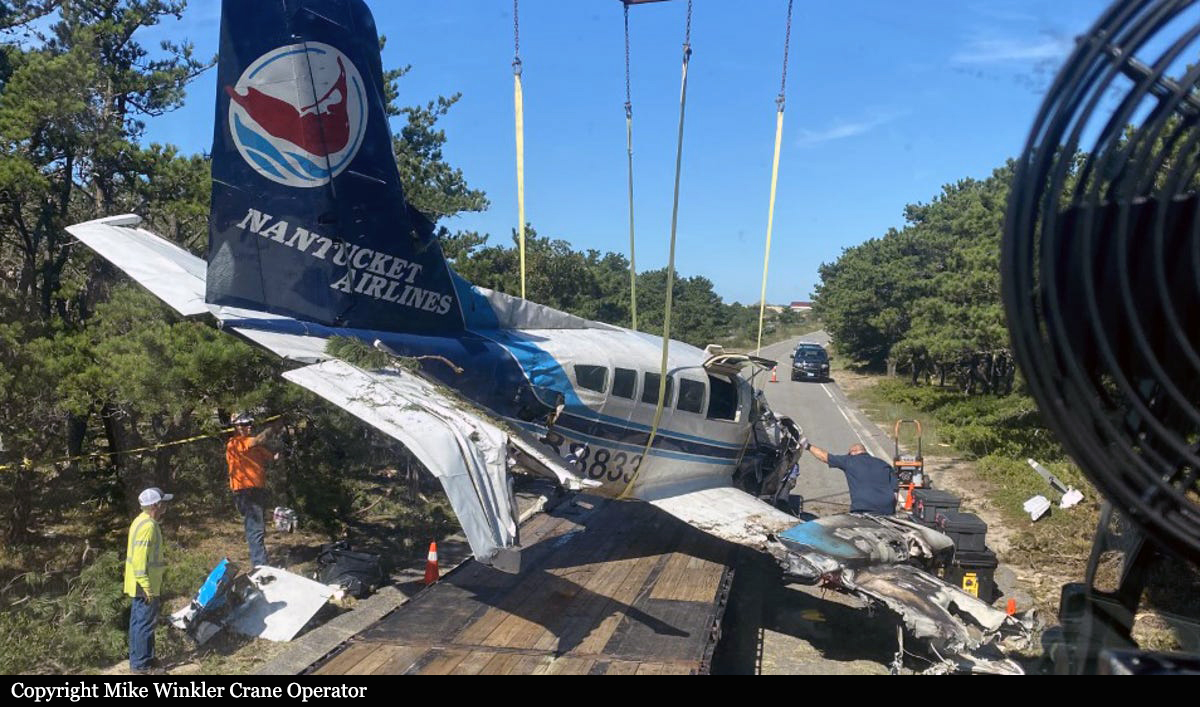 Type of aircraft:
PZL-Mielec AN-28
Operator: 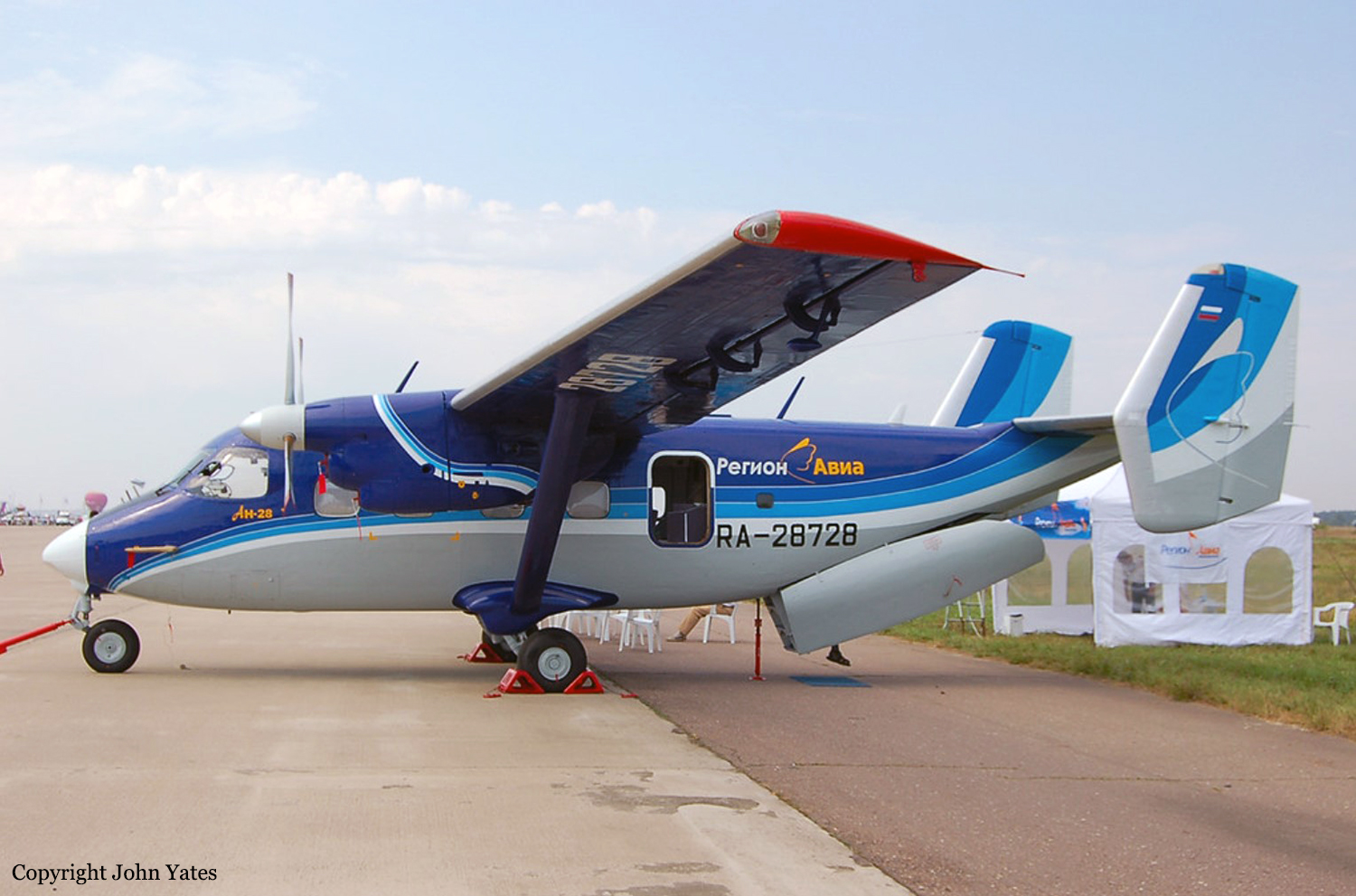 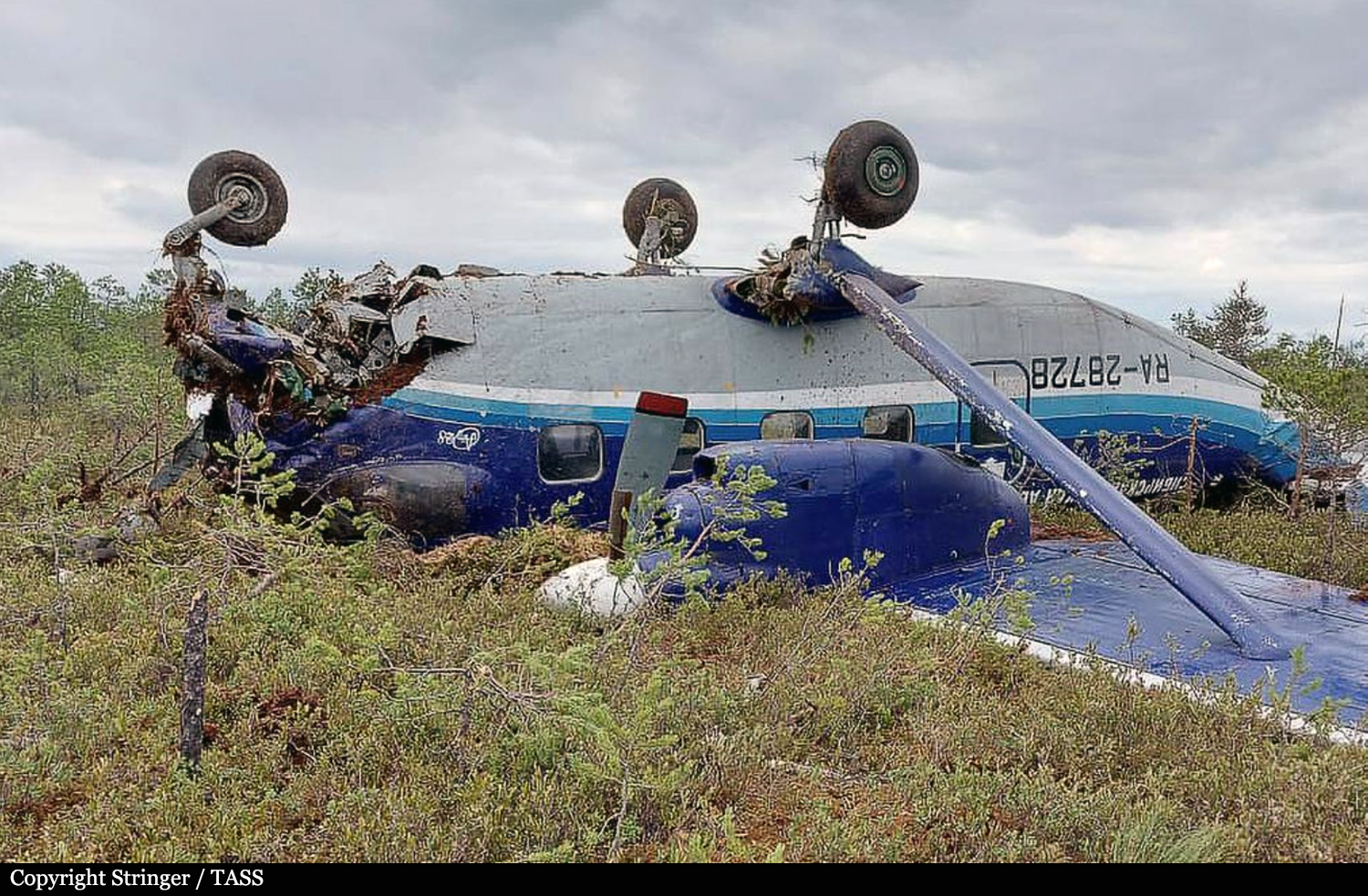 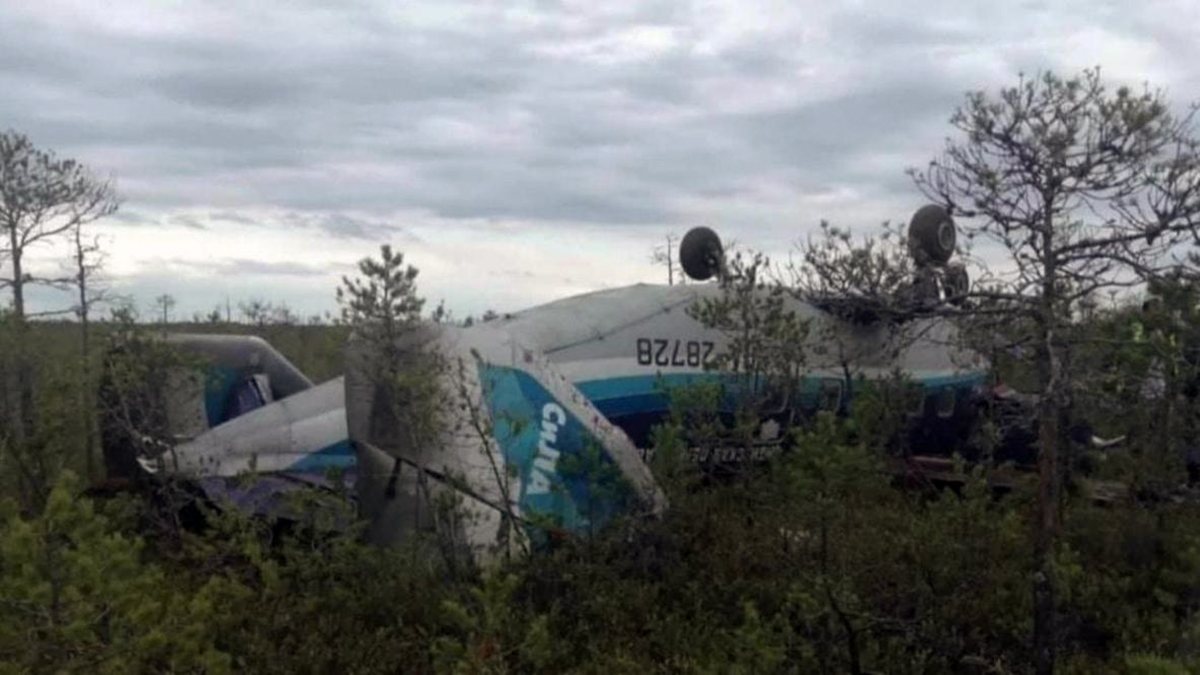 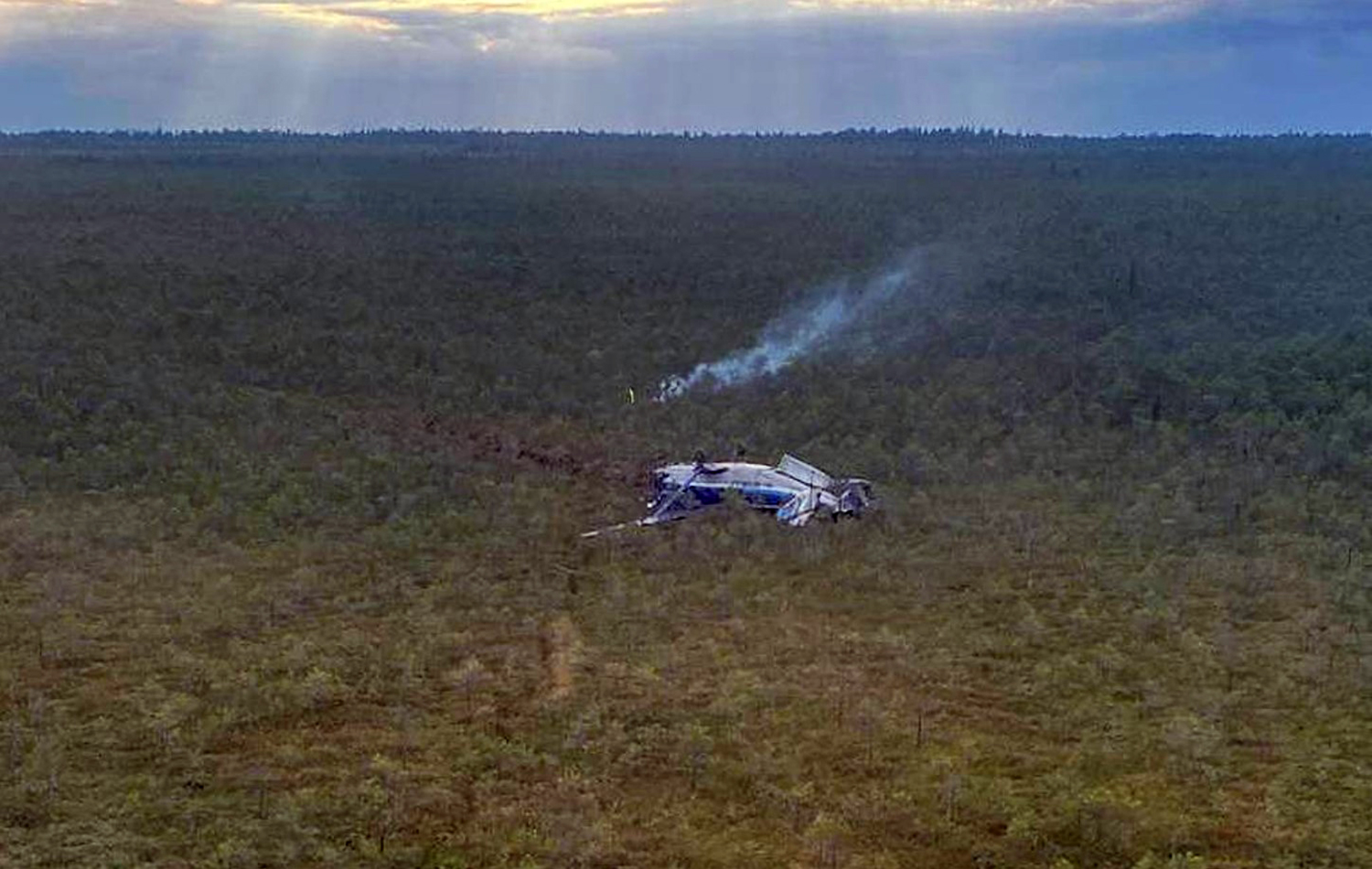 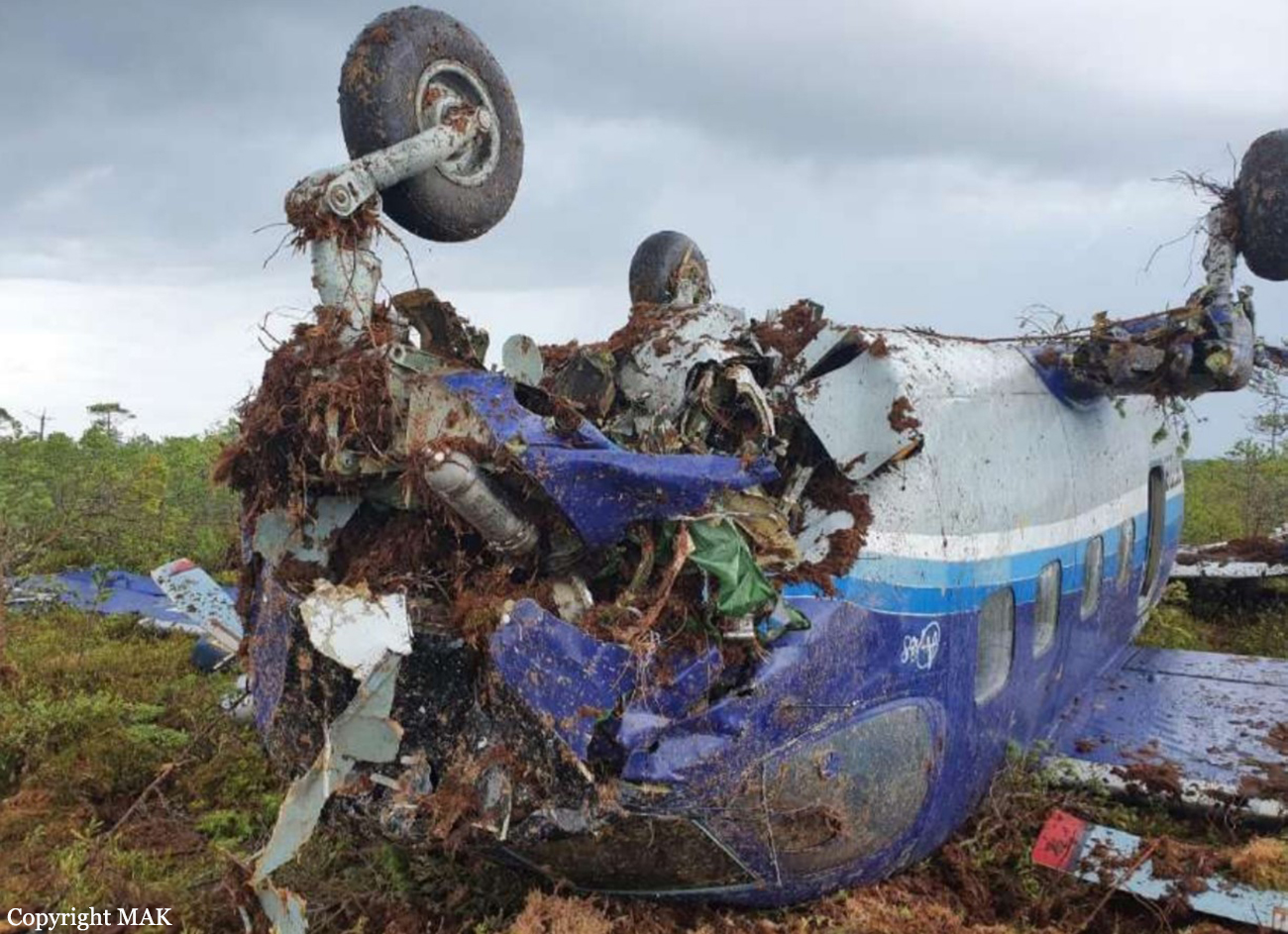 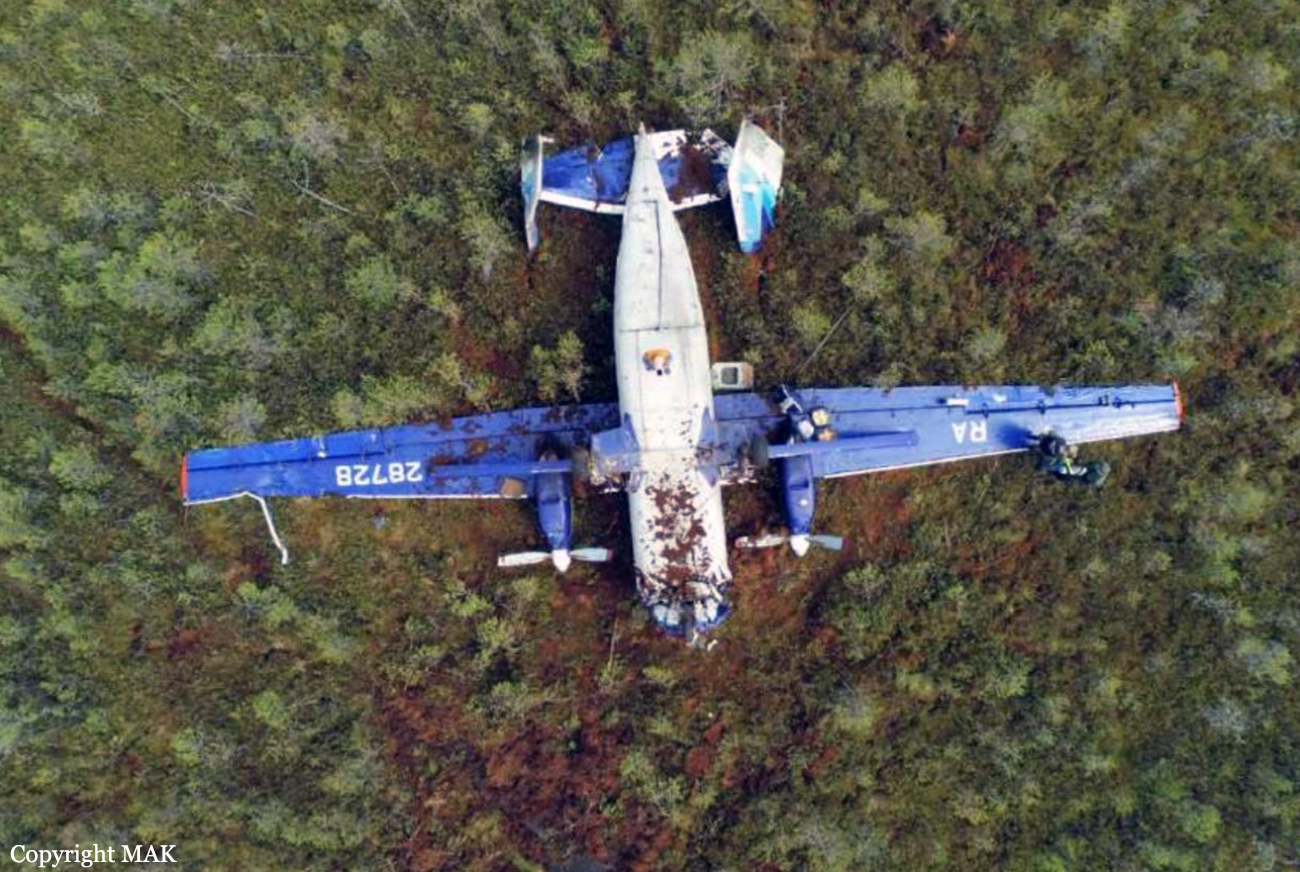