Crash of a Bristol 170 Freighter 31A in Bronson Creek

Registration:
C-FTPA
Flight Phase:
Landing (descent or approach)
Flight Type:
Cargo
Survivors:
Yes
Site:
Airport (less than 10 km from airport)
Schedule:
Wrangell - Bronson Creek
MSN:
13157
YOM:
1953
Location:
Bronson Creek
British Columbia
Country:
Canada
Region:
North America
Crew on board:
3
Crew fatalities:
Pax on board:
0
Pax fatalities:
Other fatalities:
Total fatalities:
0
Circumstances:
Upon touchdown at Bronson Creek Airport, the right main gear collapsed. The right wing struck the runway surface and out of control, the aircraft veered off runway and came to rest in a grassy area. All three occupants escaped with minor injuries while the aircraft was damaged beyond repair.
Probable cause:
It is believed that the bolts attaching the right horizontal gear support to the main wheel failed upon landing. 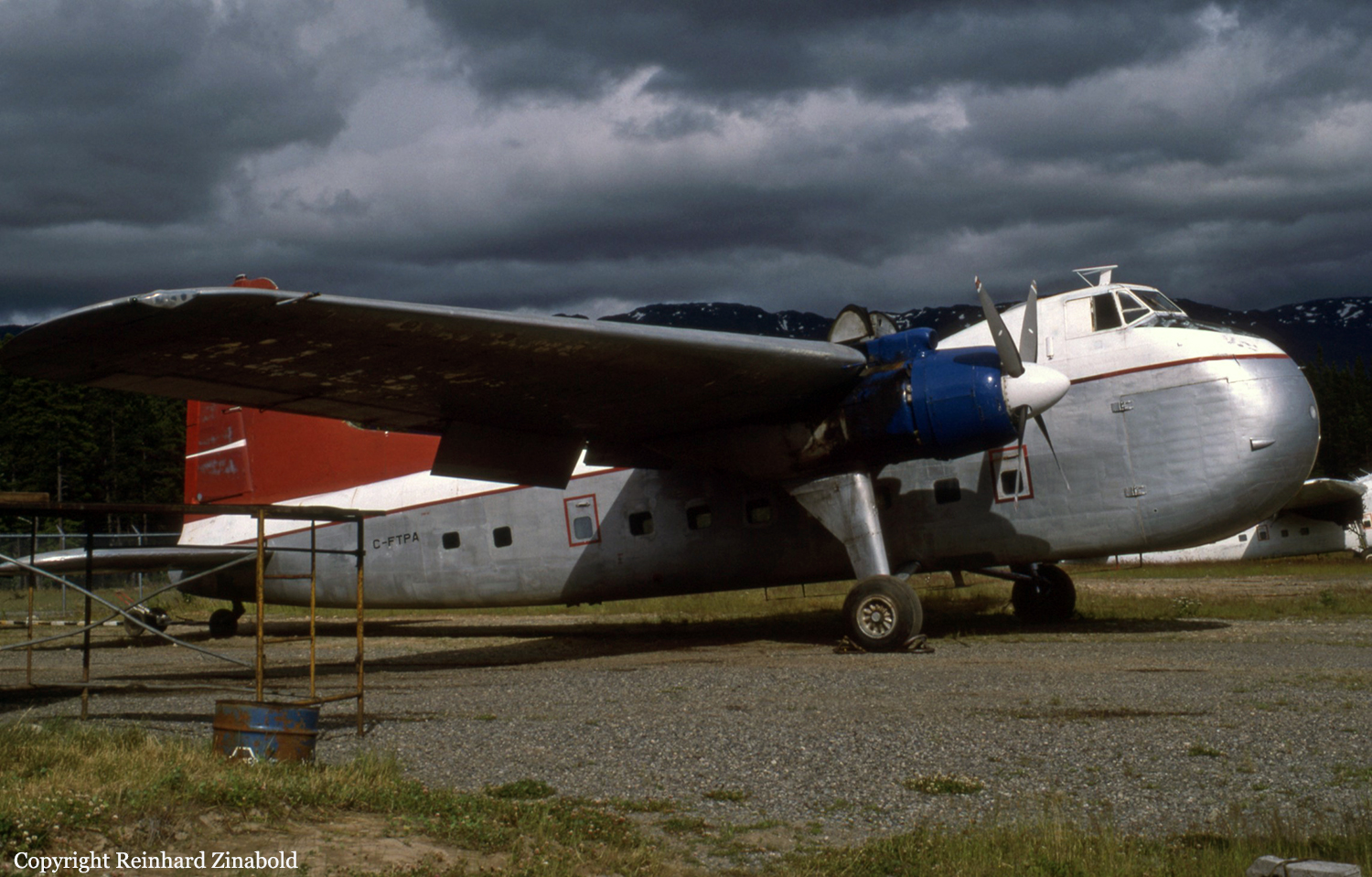 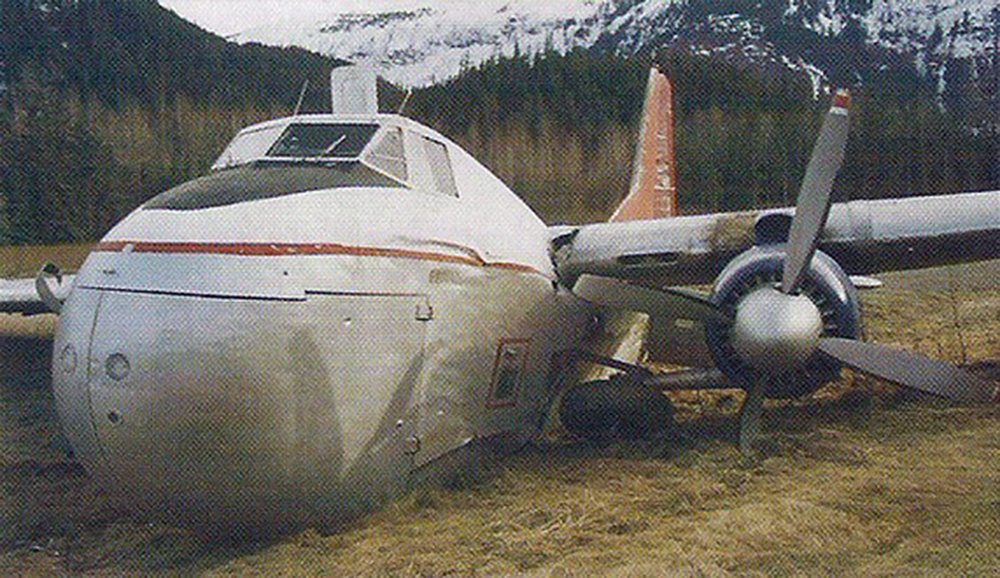 Crash of a Bristol 170 Freighter Mk 31M in Enstone

Registration:
C-FDFC
Flight Phase:
Takeoff (climb)
Flight Type:
Positioning
Survivors:
Yes
Site:
Airport (less than 10 km from airport)
Schedule:
Enstone - Bristol
MSN:
13218
YOM:
1954
Location:
Enstone
Oxfordshire
Country:
United Kingdom
Region:
Europe
Crew on board:
2
Crew fatalities:
Pax on board:
6
Pax fatalities:
Other fatalities:
Total fatalities:
0
Captain / Total flying hours:
11000
Captain / Total hours on type:
1300.00
Copilot / Total hours on type:
60
Circumstances:
The weather at the departure airfield consisted of a light and variable wind, good visibility and a temperature of 20ºC. At the start of the take-off run the aircraft, which was being flown by the copilot, who is also an experienced pilot with some 60 hours on type, began to swing to the right. Corrective action caused it to swing to the left but, after further correction,the aircraft continued accelerating and swing to the right. The Bristol Freighter is well known for its tendency to swing on takeoff. The commander joined the co-pilot on the controls and attempted to assist in correcting the right-hand swing. It became apparent to the pilots that they would be unable to prevent the aircraft running over the edge of the runway and, as there were people standing by the edge and a small control tower building behind them, they applied full up-elevator in an effort to avoid a collision. Because of the low airspeed at which this occurred, the aircraft stalled and the left wing tip hit the ground. This caused the aircraft to turn so that it was then travelling sideways which resulted in the landing gear collapsing as it touched the runway. The aircraft then slid off the runway onto the grass. There was no fire and the only injuries were sustained by three of the aircraft passengers.
Final Report: 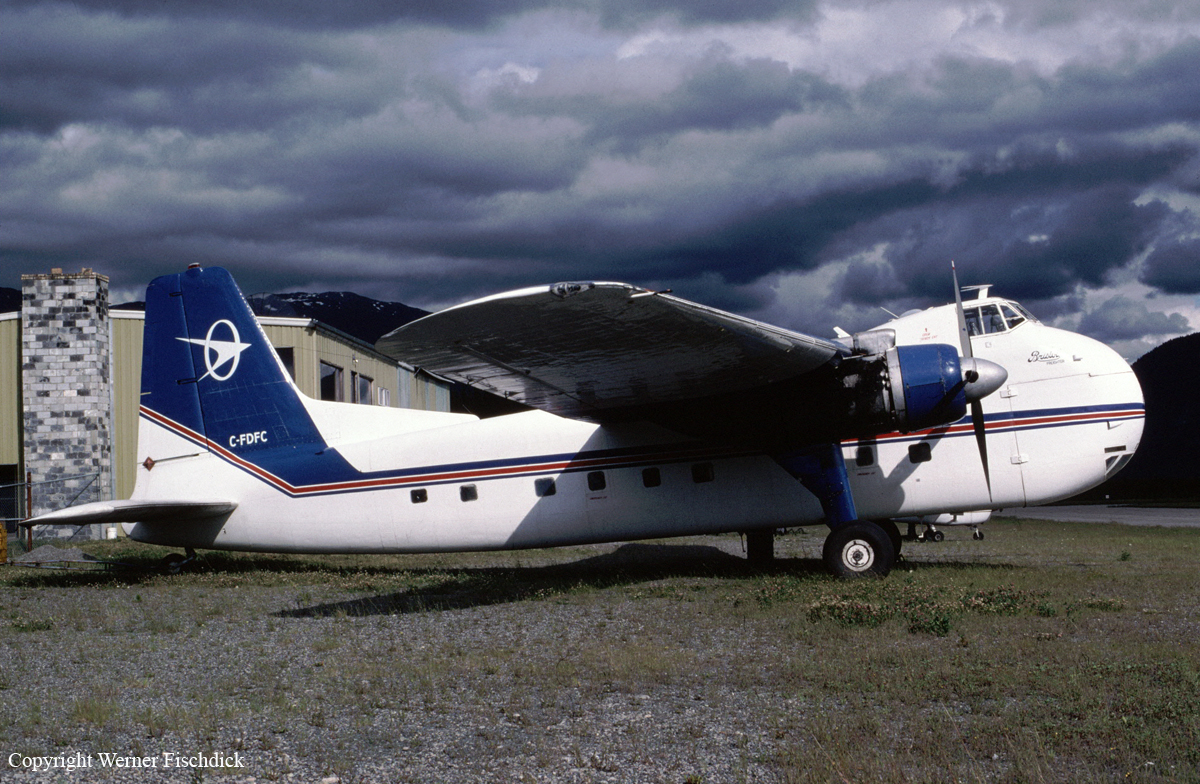 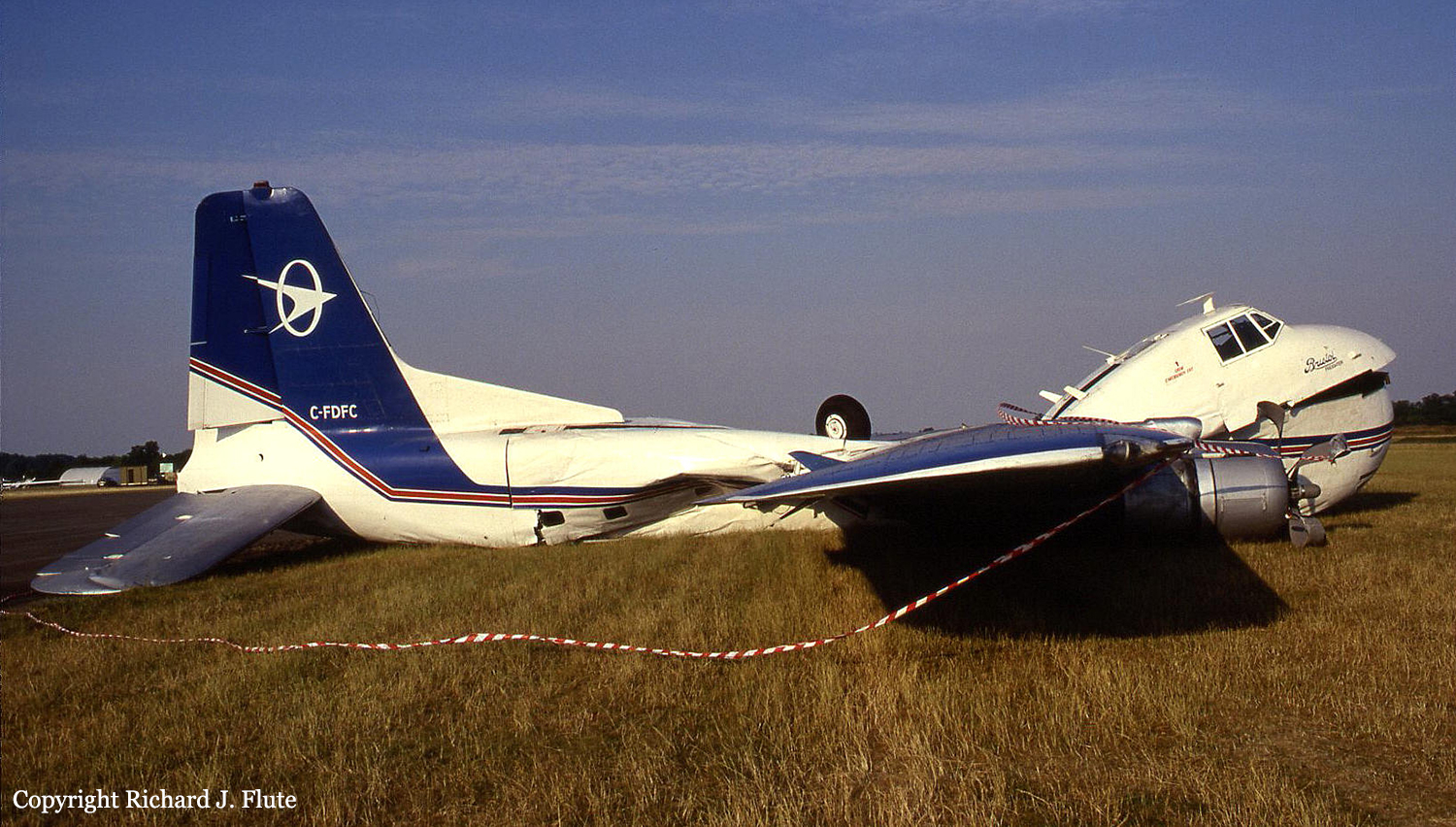 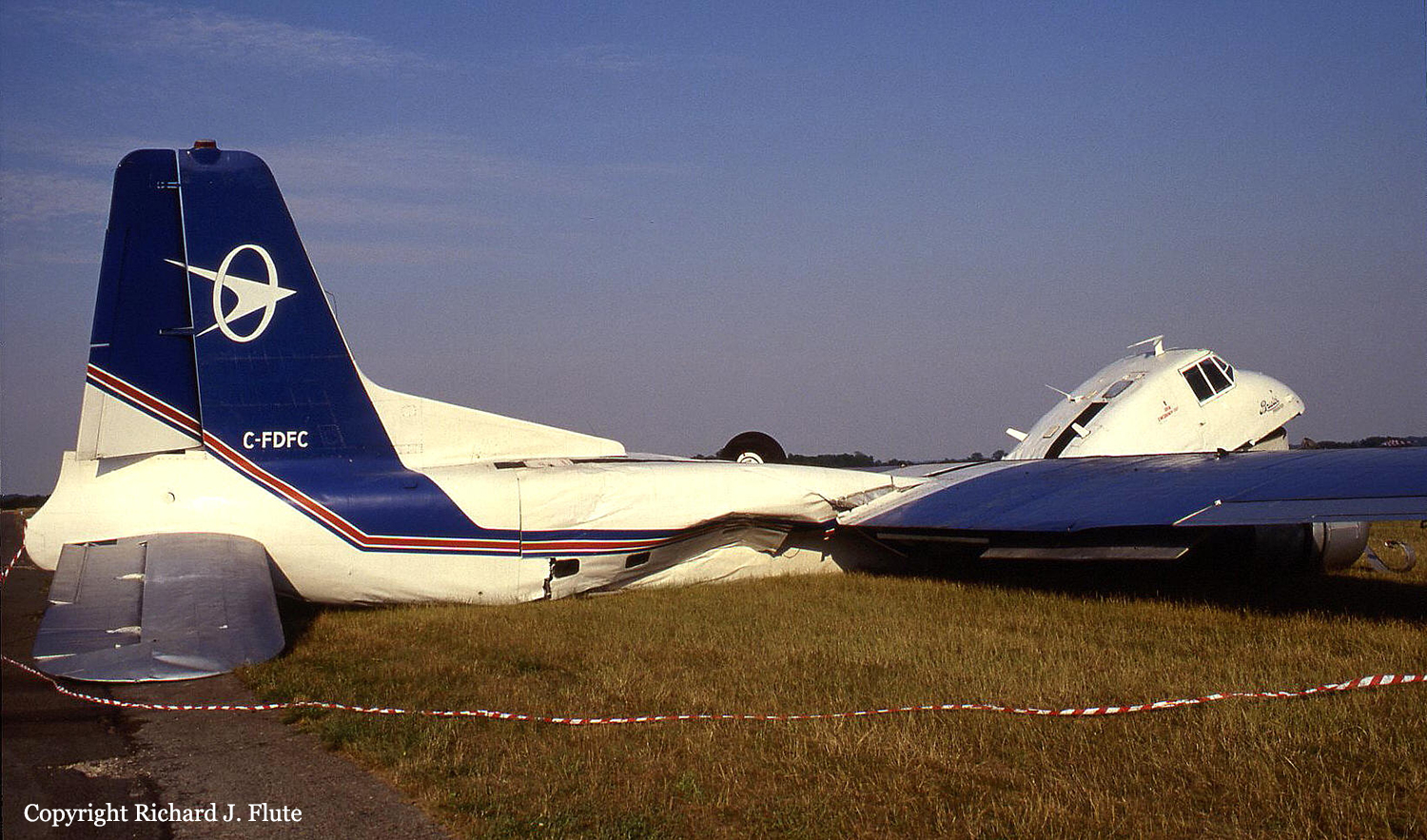 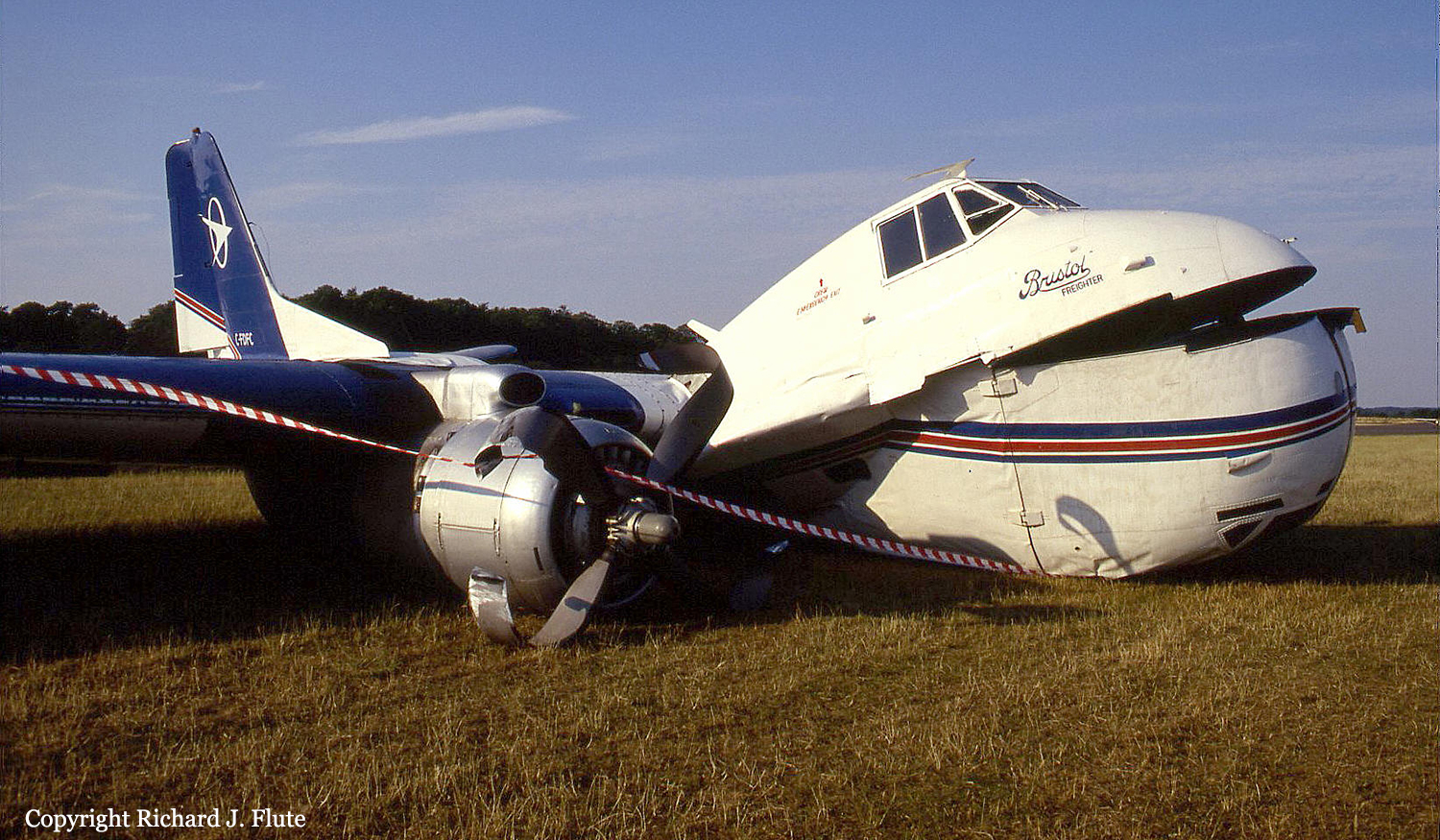 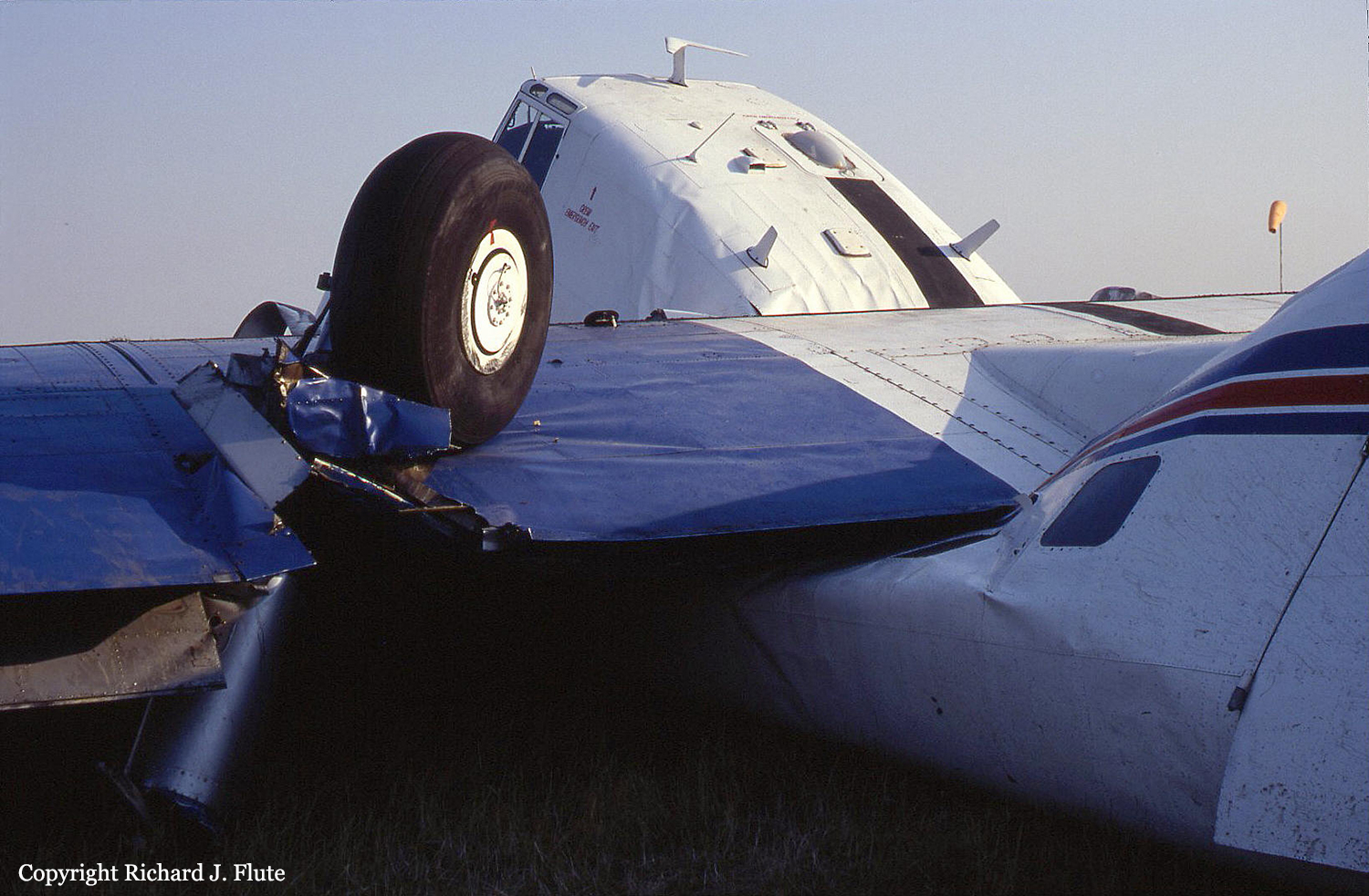 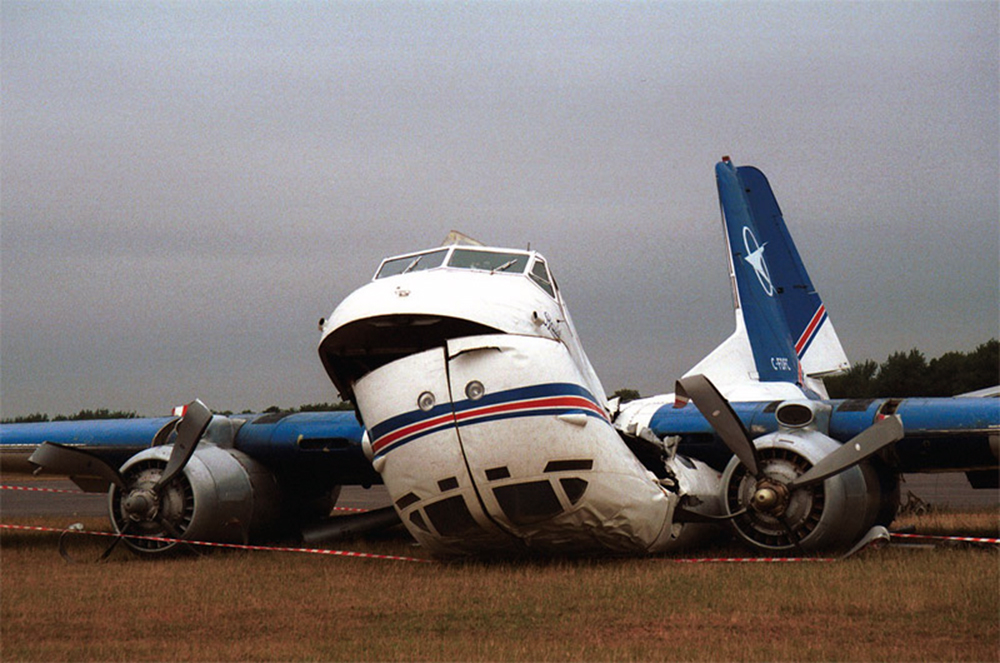 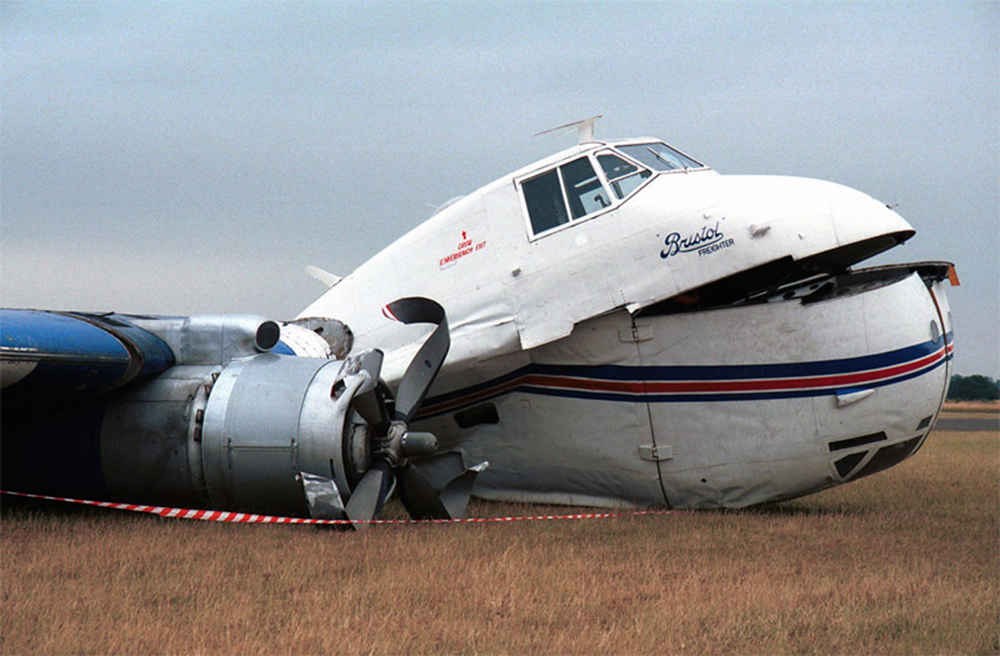 Crash of a Bristol 170 Freighter 31M in Bronson Creek 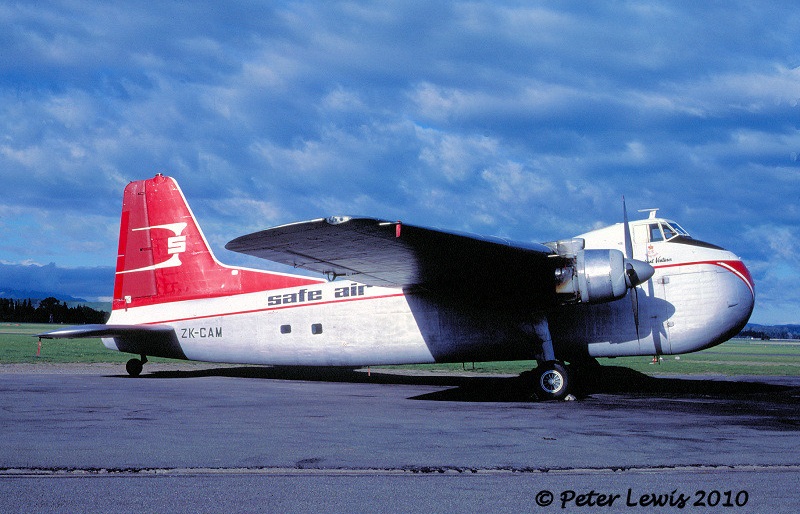 Registration:
C-FWAD
Flight Phase:
Takeoff (climb)
Flight Type:
Cargo
Survivors:
Yes
Site:
Airport (less than 10 km from airport)
MSN:
13253
YOM:
1956
Location:
Hay River
Northwest Territories
Country:
Canada
Region:
North America
Crew on board:
2
Crew fatalities:
Pax on board:
0
Pax fatalities:
Other fatalities:
Total fatalities:
1
Circumstances:
After takeoff from Hay River, while climbing to a height of 200 feet, the crew lost control of the airplane that crashed near the airport. A pilot was killed while the second occupant was seriously injured.
Probable cause:
It was determined that the crew lost control of the airplane after the cargo shifted during initial climb. It is believed that the cargo was not properly stowed. 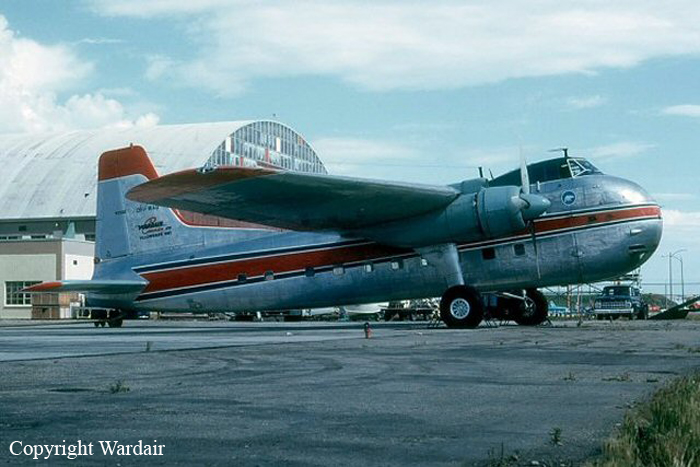 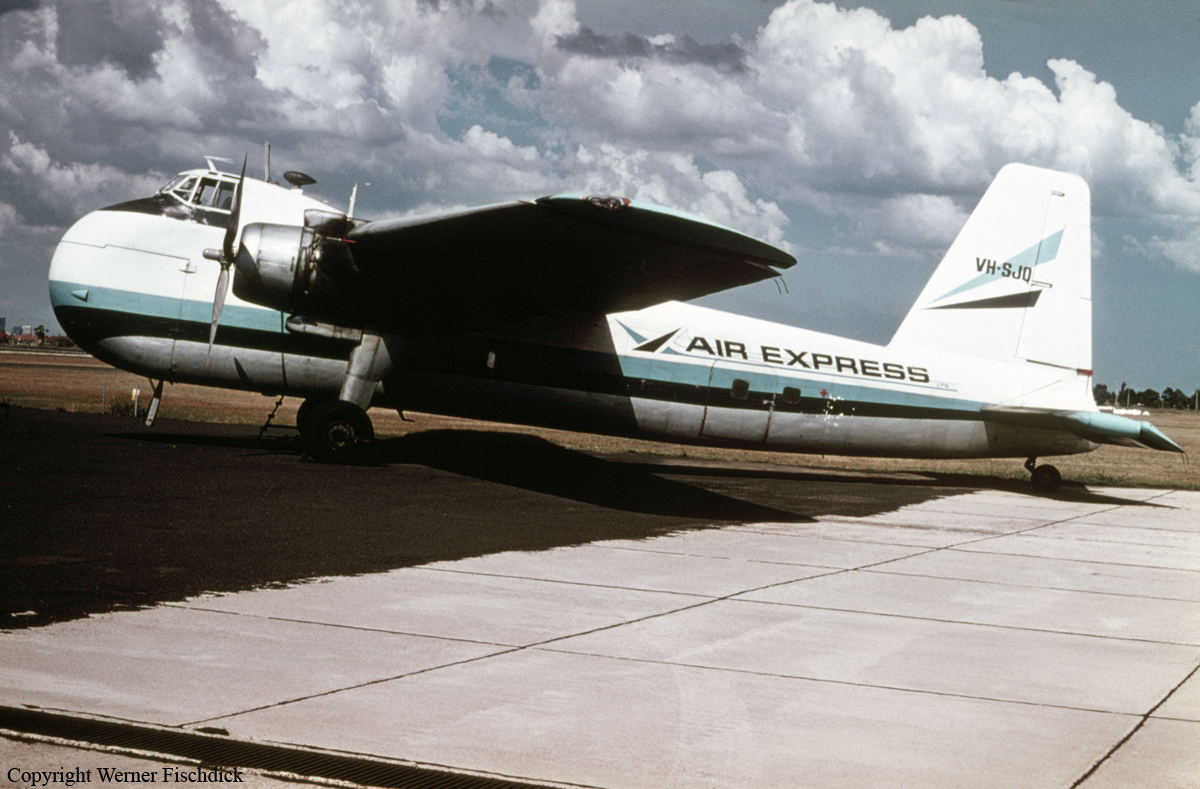 Crash of a Bristol 170 Freighter 31E in Rankin Inlet: 2 killed 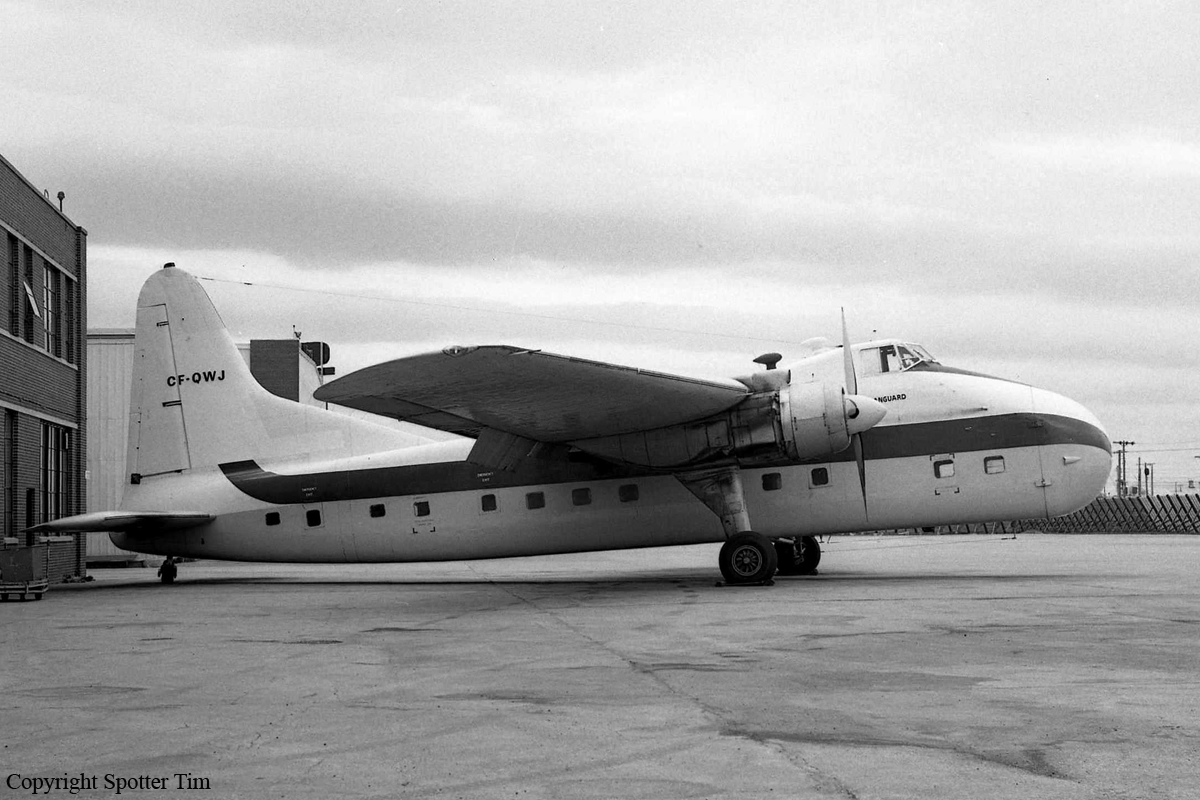 Crash of a Bristol 170 Freighter 31M off Lutselk'e

Crash of a Bristol 170 Freighter 31M in Iraq

Registration:
EI-APM
Flight Phase:
Landing (descent or approach)
Flight Type:
Cargo
Survivors:
No
Site:
Airport (less than 10 km from airport)
Schedule:
Glasgow - Dublin
MSN:
13076
YOM:
1951
Flight number:
QT612
Location:
Dublin
Leinster
Country:
Ireland
Region:
Europe
Crew on board:
2
Crew fatalities:
Pax on board:
0
Pax fatalities:
Other fatalities:
Total fatalities:
2
Circumstances:
Upon landing on runway 17 at Dublin Airport, the airplane seemed to be uncontrollable and bounced 3-4 times. The captain decided to abandon the landing, attempted a go around and increased engine power. After takeoff, while climbing to a height of approximately 50 feet, the airplane turned to the left when it stalled and crashed onto a hangar. The aircraft was destroyed and both crew members were killed. There were no injuries on the ground.
Probable cause:
The reason why the aircraft bounced on landing could not be determined with certainty. However, it was understood that the left engine partially lost power or failed during initial climb for unknown reason. This caused the aircraft to stall and to crash as the failure occurred at a critical stage of flight (low speed and low altitude).
Subscribe to Bristol 170 Freighter