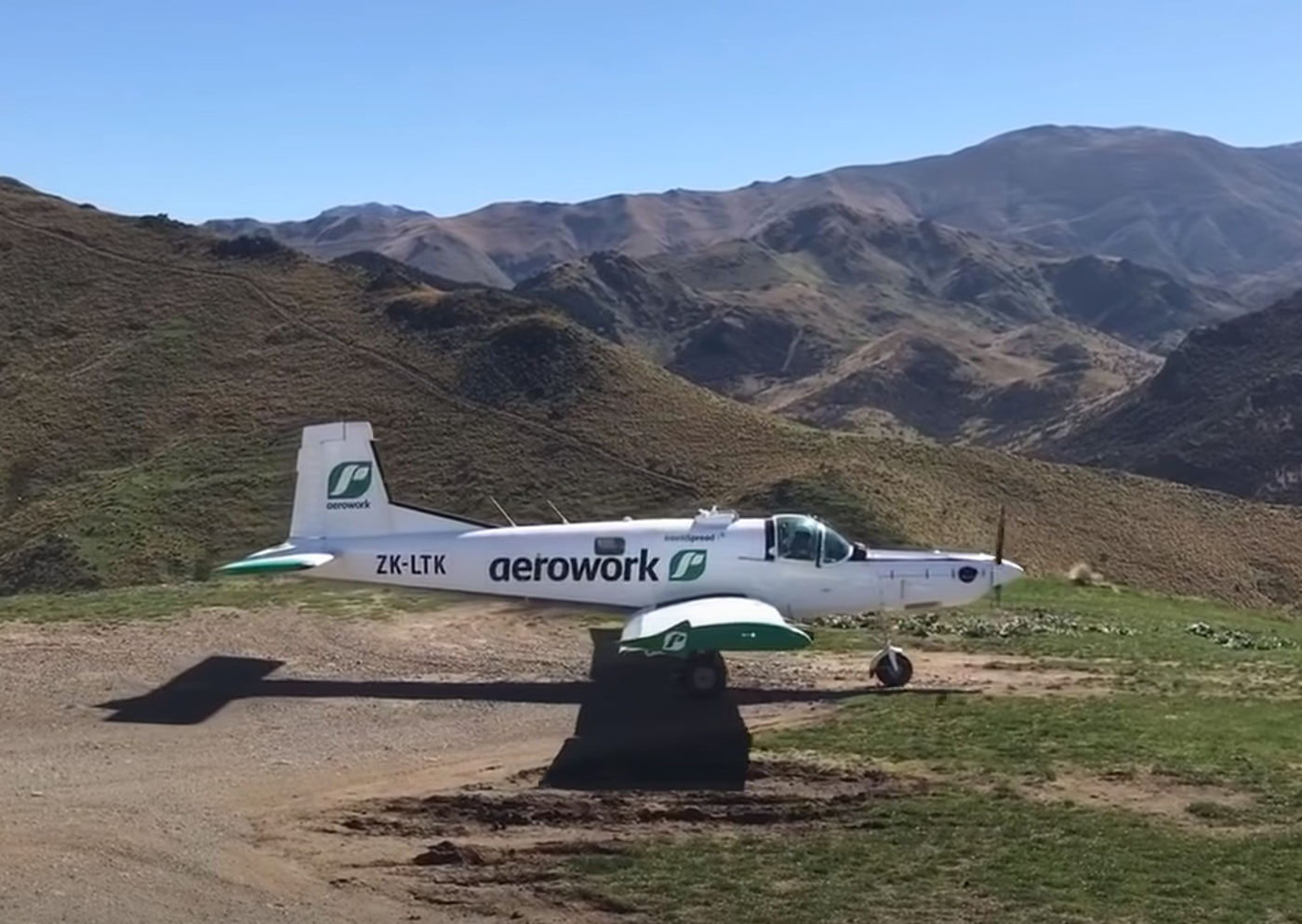 Crash of a Pacific Aerospace 750XL Falcon 3000 near Tiniroto: 2 killed 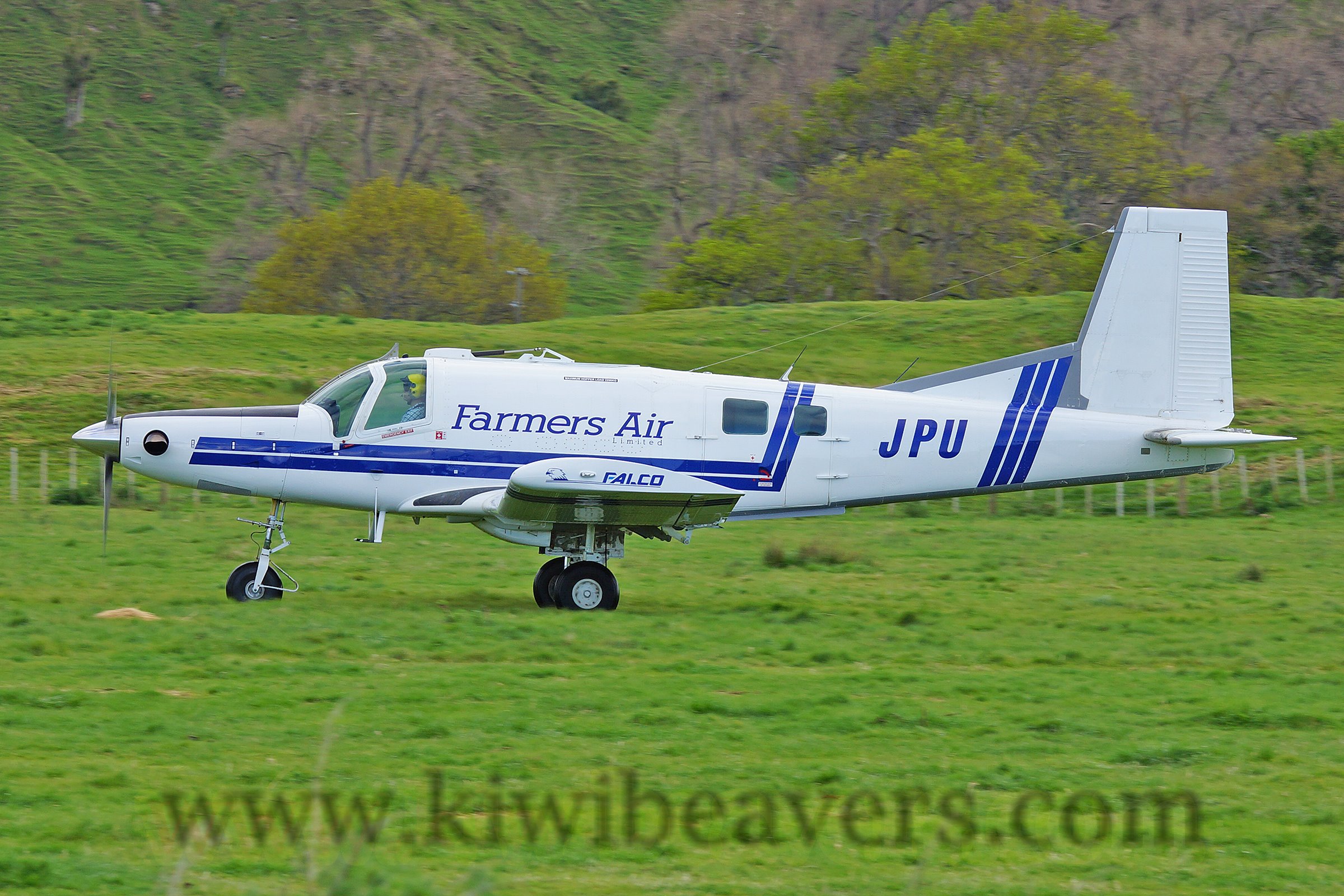 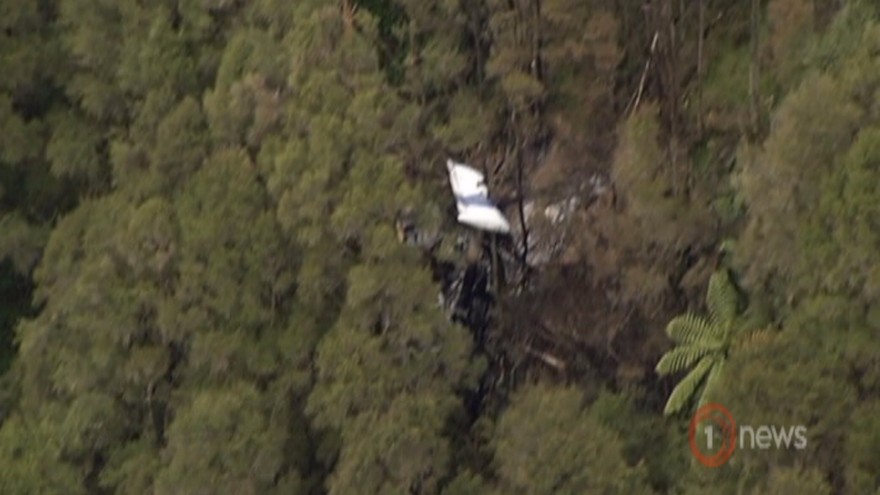 Crash of a Pacific Aerospace PAC 750XL in Taupo Lake

Registration:
ZK-SDT
Flight Phase:
Flight
Flight Type:
Skydiving / Paratroopers
Survivors:
Yes
Site:
Lake, Sea, Ocean, River
Schedule:
Taupo - Taupo
MSN:
122
YOM:
2005
Location:
Taupo
Waikato Regional Council
Country:
New Zealand
Region:
Oceania
Crew on board:
1
Crew fatalities:
Pax on board:
12
Pax fatalities:
Other fatalities:
Total fatalities:
0
Captain / Total flying hours:
588
Captain / Total hours on type:
14.00
Circumstances:
On 7 January 2015 a Pacific Aerospace Limited 750XL aeroplane was being used for tandem parachuting (or ‘skydiving’) operations at Taupō aerodrome. During the climb on the fourth flight of the day, the Pratt & Whitney Canada PT6A-34 engine failed suddenly. The 12 parachutists and the pilot baled out of the aeroplane and landed without serious injury. The aeroplane crashed into Lake Taupō and was destroyed.
Probable cause:
The following findings were identified:
- The first compressor turbine blade failed after a fatigue crack, which had begun at the trailing edge, propagated towards the leading edge. The blade finally fractured in tensile overload. The separated blade fragment caused other blades to fracture and the engine to stop.
- The fatigue crack in the trailing edge of the blade was likely initiated by the trailing edge radius having been below the specification for a new blade.
- The P&WC Repair Requirement Document 725009-SRR-001, at the time the blades were overhauled, had generic requirements for trailing edge thickness inspections but did not specify a minimum measurement for the trailing edge radius.
- The higher engine power settings used by the operator since August 2014 were within the flight manual limits. Therefore it was unlikely that the operator’s engine handling policy contributed to the engine failure.
- The operator had maintained the engine in accordance with an approved, alternative maintenance programme, but the registration of the engine into that programme had not been completed. The administrative oversight did not affect the reliability of the engine or contribute to the blade failure.
- It was likely that the maintenance provider had not followed fully the engine manufacturer’s recommended procedure for inspecting the compressor turbine blades. It could not be determined whether the crack might have been present, and potentially detectable, at the most recent borescope inspection.
- The operator had not equipped its pilots with flotation devices to cover the possibility of a ditching or an emergency bale-out over or near water.
- The pilot had demonstrated that he was competent and he had the required ratings. However, it was likely that the operator’s training of the pilot in emergency procedures was inadequate. This contributed to the pilot making a hasty exit from the aeroplane that jeopardized others.
Final Report: 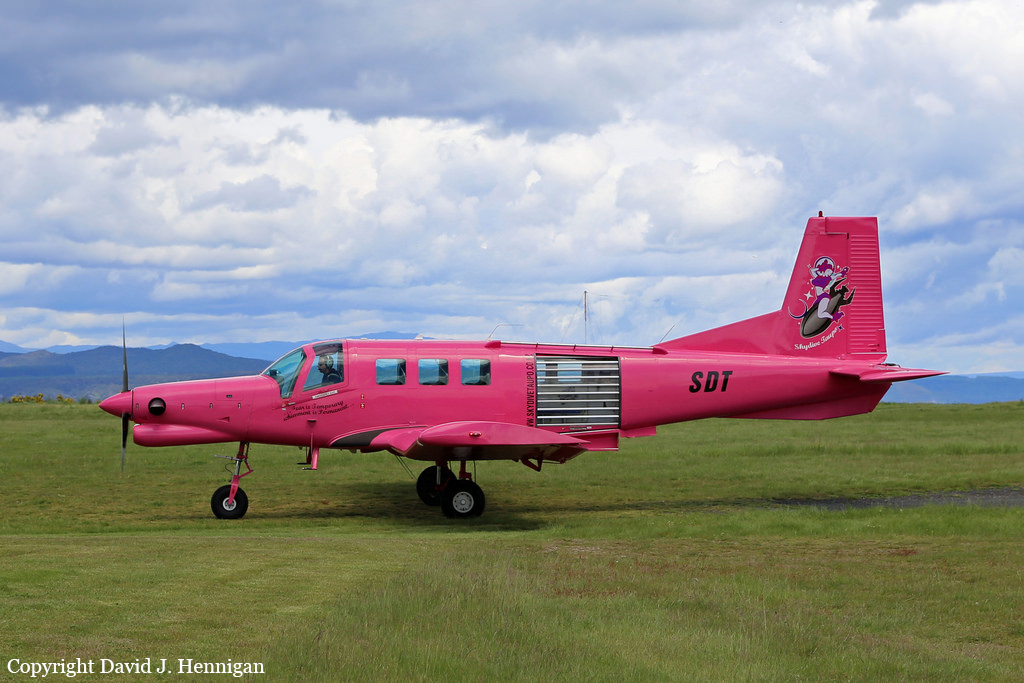 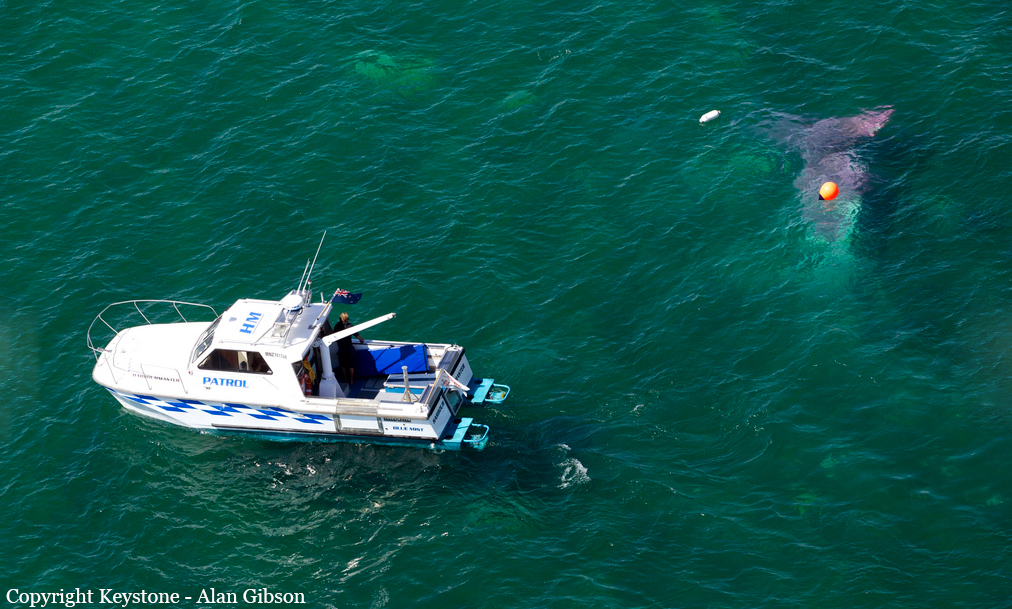 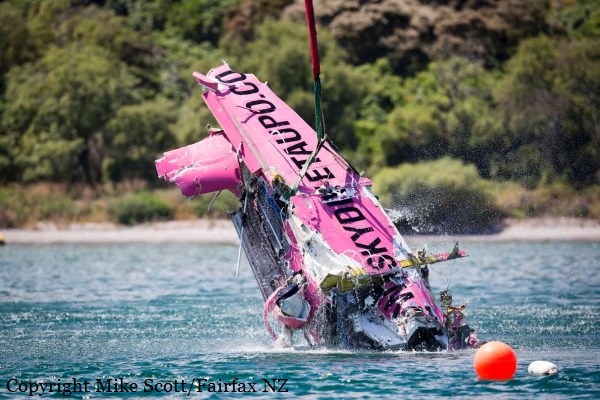 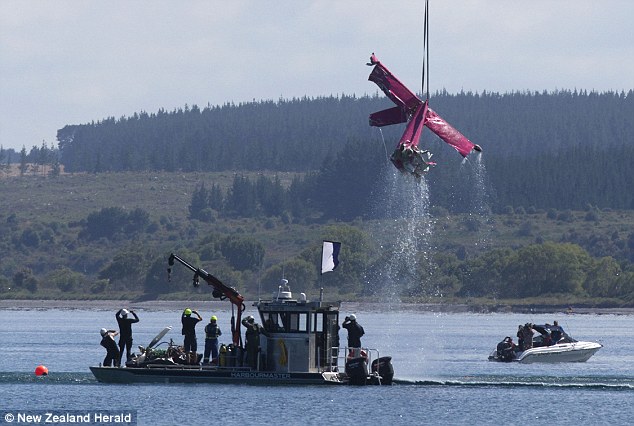 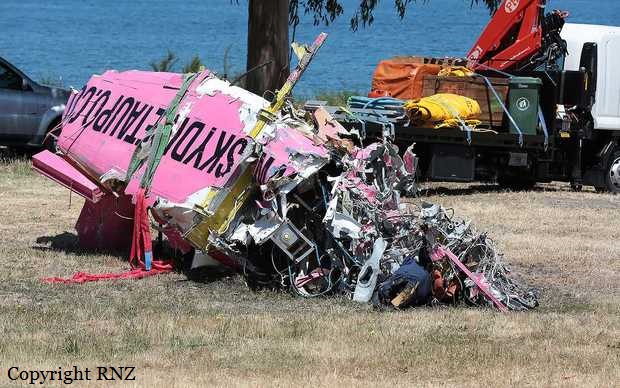 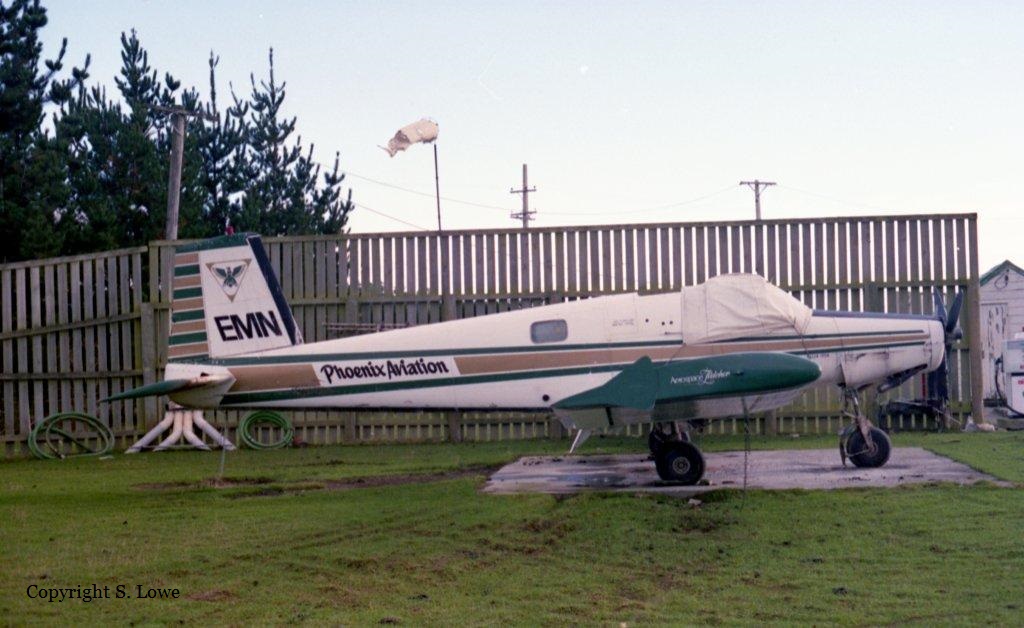 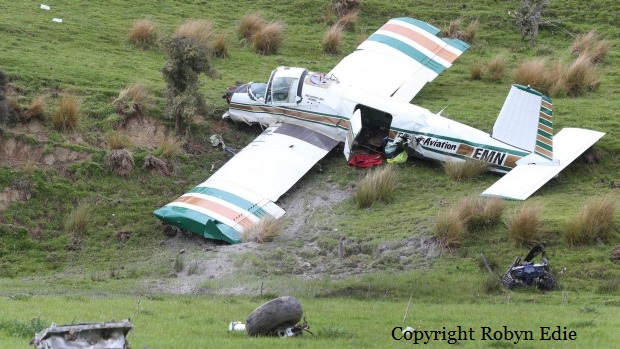 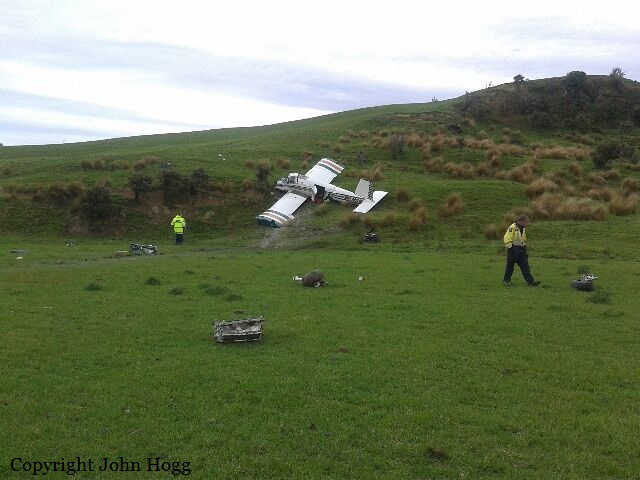 Registration:
ZK-LTE
Flight Phase:
Landing (descent or approach)
Flight Type:
Spraying (Agricultural)
Survivors:
Yes
Site:
Airport (less than 10 km from airport)
Schedule:
Otane - Otane
MSN:
029
YOM:
2001
Location:
Otane
Hawke's Bay Regional Council
Country:
New Zealand
Region:
Oceania
Crew on board:
1
Crew fatalities:
Pax on board:
1
Pax fatalities:
Other fatalities:
Total fatalities:
0
Circumstances:
The pilot and the passenger were completing a top dressing mission in the region of Otane, south of Hastings, New Zealand. On final approach, the single engine aircraft seemed to be too low and hit tree tops before crashing nose down in a prairie. Both occupants were seriously injured and the aircraft was destroyed. It was dark at the time of the accident as the sunrise was computed at 0639LT. 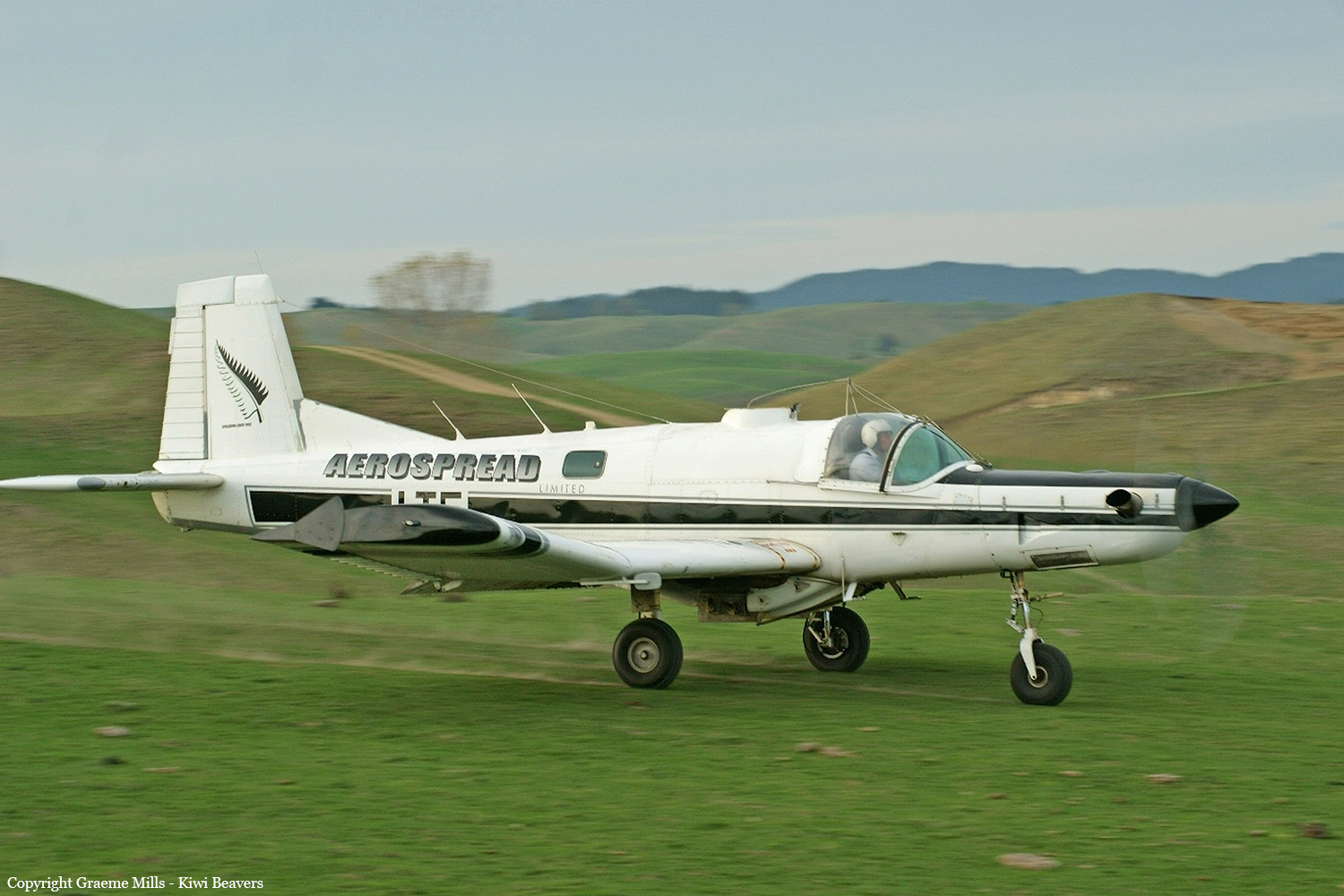 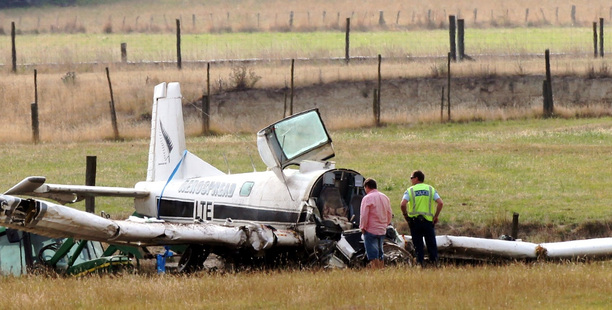 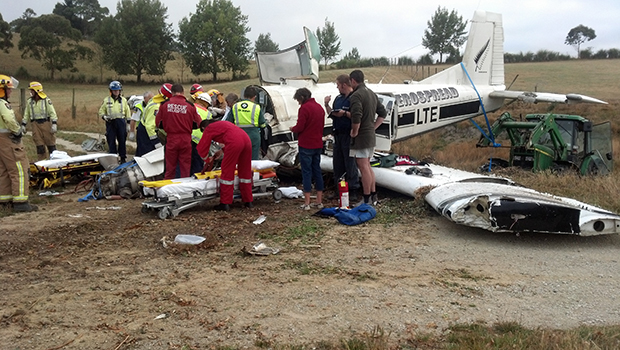 Crash of a Cessna 207A Stationair 8 II in Mount Nicholas 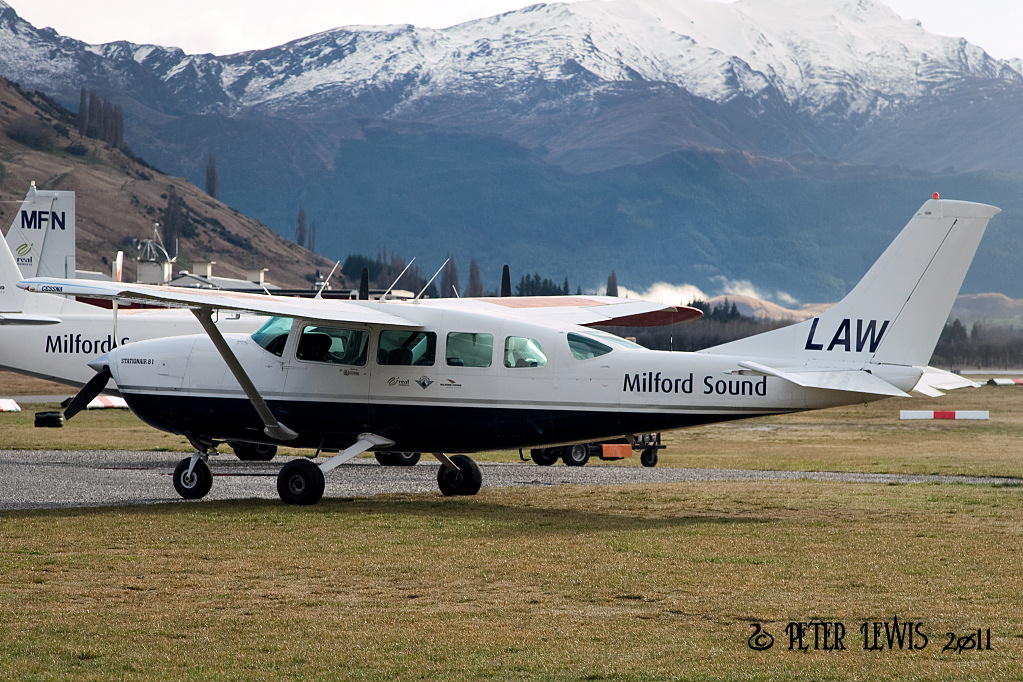 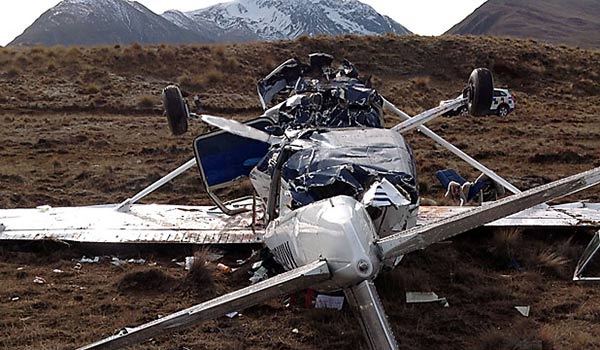 Registration:
ZK-DLA
Flight Phase:
Landing (descent or approach)
Flight Type:
Scheduled Revenue Flight
Survivors:
Yes
Site:
Airport (less than 10 km from airport)
Schedule:
Auckland – Okiwi Station
MSN:
2131
YOM:
1984
Location:
Okiwi Station
Auckland Council
Country:
New Zealand
Region:
Oceania
Crew on board:
1
Crew fatalities:
Pax on board:
8
Pax fatalities:
Other fatalities:
Total fatalities:
0
Captain / Total flying hours:
3170
Captain / Total hours on type:
296.00
Circumstances:
On approach to runway 18 at Okiwi, New Zealand, the aircraft encountered windshear on short final as the pilot reduced power to land. The pilot was unable to arrest the descent rate and the aircraft landed heavily. Damage was caused to both landing gear oleos and one brake unit, with rippling found on the upper and lower skin of each wing. One passenger sustained a back injury, which was later identified as a fractured vertebra. The pilot was aware of fluctuating wind conditions at Okiwi and had increased the approach speed to 70 knots as per company standard operating procedures. The pilot reported that despite this, the airspeed reduced rapidly and significantly at 10 to 15 feet agl, leaving little time to react to the situation.
Probable cause:
Loss of height and hard landing due to windshear on short final. 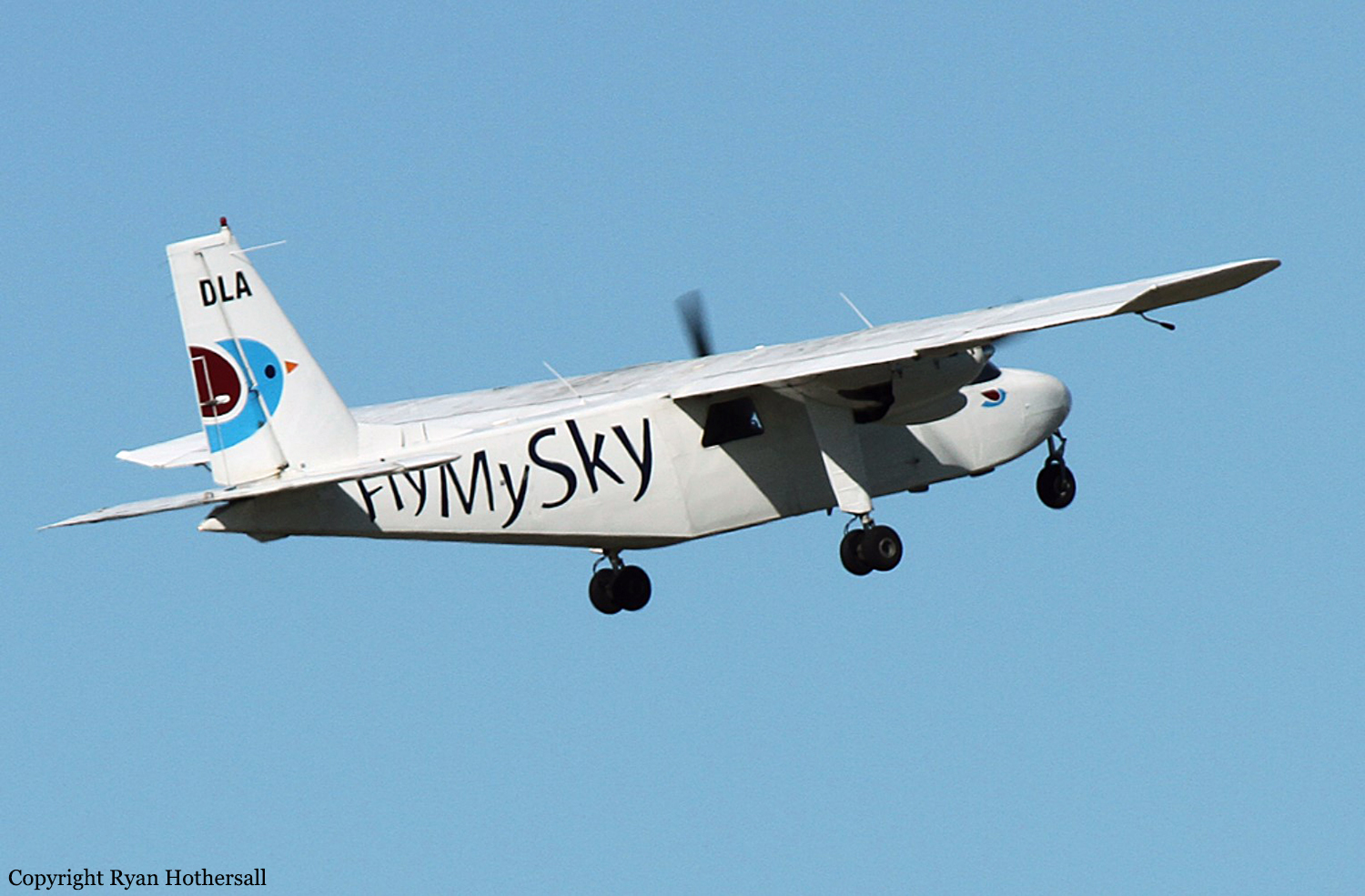 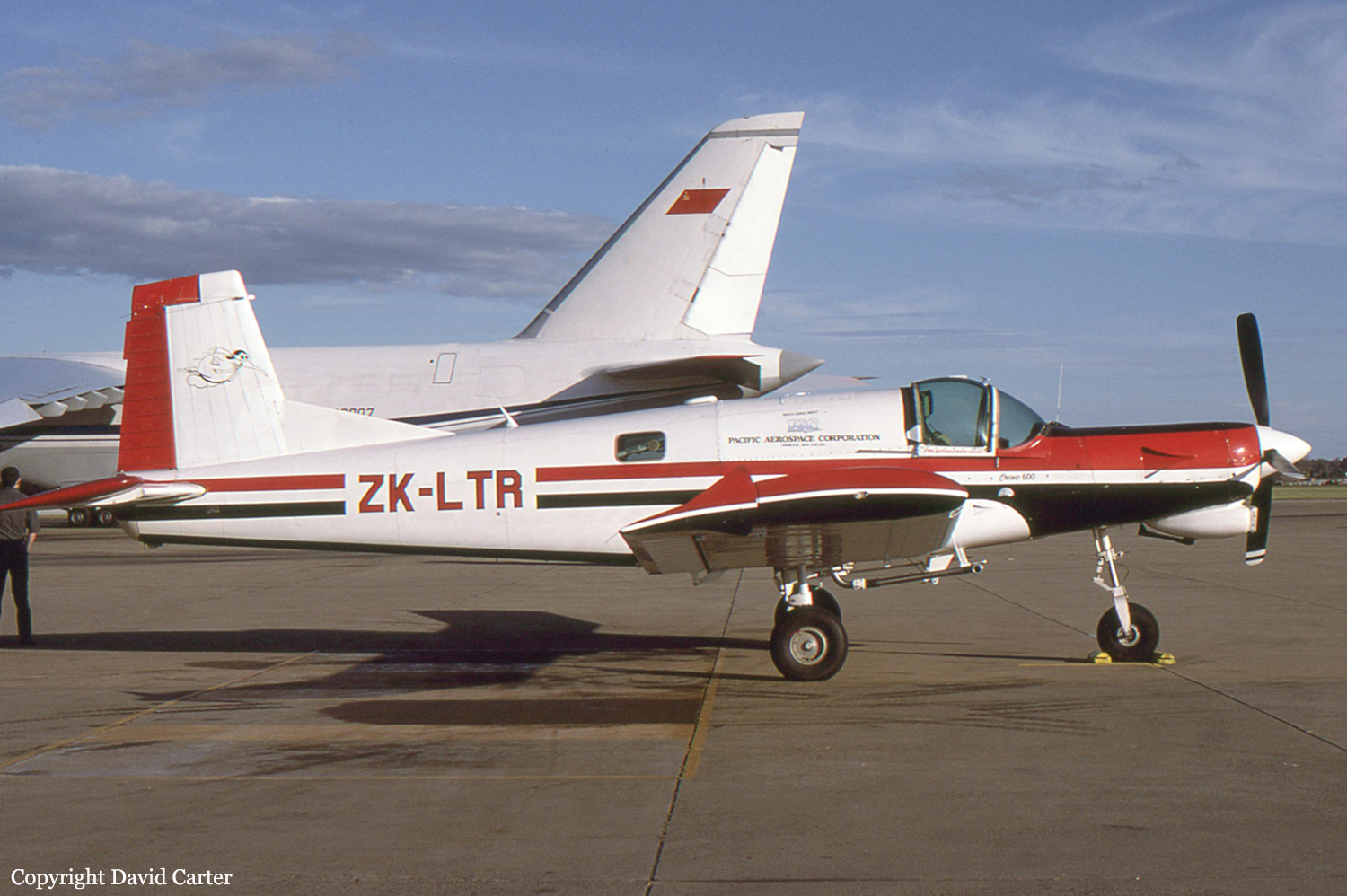 Registration:
ZK-EMX
Flight Phase:
Flight
Flight Type:
Spraying (Agricultural)
Survivors:
No
Site:
Plain, Valley
MSN:
278
YOM:
1981
Location:
Rotorua
Bay of Plenty Regional Council
Country:
New Zealand
Region:
Oceania
Crew on board:
1
Crew fatalities:
Pax on board:
0
Pax fatalities:
Other fatalities:
Total fatalities:
1
Captain / Total flying hours:
430
Captain / Total hours on type:
95.00
Aircraft flight hours:
11300
Circumstances:
The pilot, who was undertaking training toward a Grade 2 Agricultural Pilot Rating, began work at approximately 0625 hours on the day of the accident. The pilot and his instructor, who was in another topdressing aircraft, flew to a block of land to the south east of Rotorua where the pilot completed 15 sowing runs, while his instructor worked in the local vicinity in the second aircraft. The pilot and instructor completed the work on this block, had a break and then transited to the Waikite Valley, arriving at approximately 0945 hours. At 1045 hours, after refuelling his aircraft, the pilot commenced sowing a ‘special mix’ fertiliser, in an alternating pattern between the instructor and pilot, with two aircraft operating from the airstrip. The alternating pattern allowed the instructor to observe and supervise the pilot during the take off and landing phases, while allowing the operation to proceed efficiently. The pilot and instructor stopped for lunch after an hour of flying, refuelled once more and then continued with their work. The amount of fertiliser that was loaded into the pilot’s aircraft was progressively increased as the work proceeded. The initial load of product was 900 kg, gradually increasing by 50 kg increments, when the instructor was satisfied that the pilot’s performance allowed this increase. The last five loads carried prior to the accident were each 1100 kg. Nothing untoward was noticed during the sowing runs, apart from the pilot aborting one landing attempt, due to the wake turbulence from the instructor’s aircraft during take off. At the time of the accident the pilot was performing ‘clearing runs’, sowing on remaining areas of land not already covered by previous sowing runs. Immediately prior to the accident, the pilot called the instructor on the radio to enquire of his location. The instructor responded with “directly behind you on the other side of the woolshed”. A few seconds later, as the instructor approached to land at the airstrip, he observed the pilot’s aircraft flying in a westerly direction at approximately 400 ft AGL. He then saw the pilot’s aircraft make a slight turn to the left. Describing what he had seen as: “he started to climb and turn slightly to the left, then the plane was in a left hand spin”. The instructor thought at the time that the aircraft spun for one and a half rotations to the left, prior to being obscured by the ridge adjacent to the airstrip. The accident occurred in daylight, at approximately 1315 hours, at Waikite Valley, Rotorua, at an elevation of 1460 ft. Latitude S 38° 18.5', longitude E 176° 17.42'.
Probable cause:
Conclusions
- The pilot was appropriately licensed and held a valid medical certificate.
- The aircraft had been appropriately maintained and no technical discrepancy was discovered that could have contributed to the accident.
- It is likely that, during a climbing turn, the pilot inadvertently allowed an aerodynamic stall to occur at which point the aircraft suddenly departed controlled flight.
- No emergency jettison of the hopper contents was attempted.
- The height above the ground, was insufficient for the pilot to perform a successful recovery once the departure from controlled flight had fully developed.
- The pilot’s lack of experience with agricultural operations and relative unfamiliarity with the aircraft type could not be eliminated as having a bearing on the accident.
Final Report: 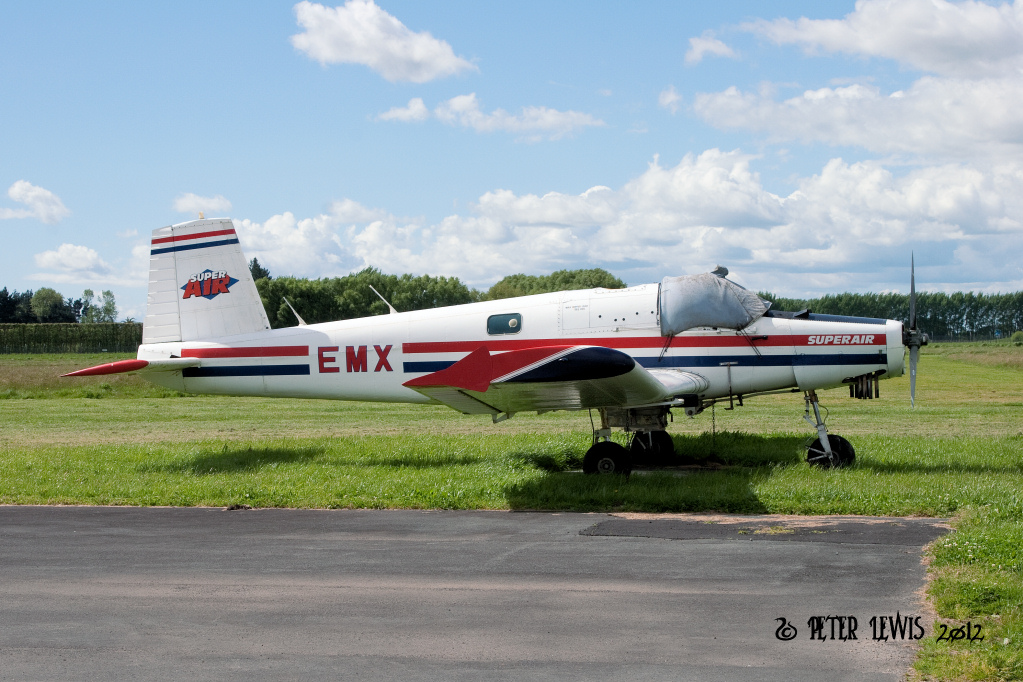 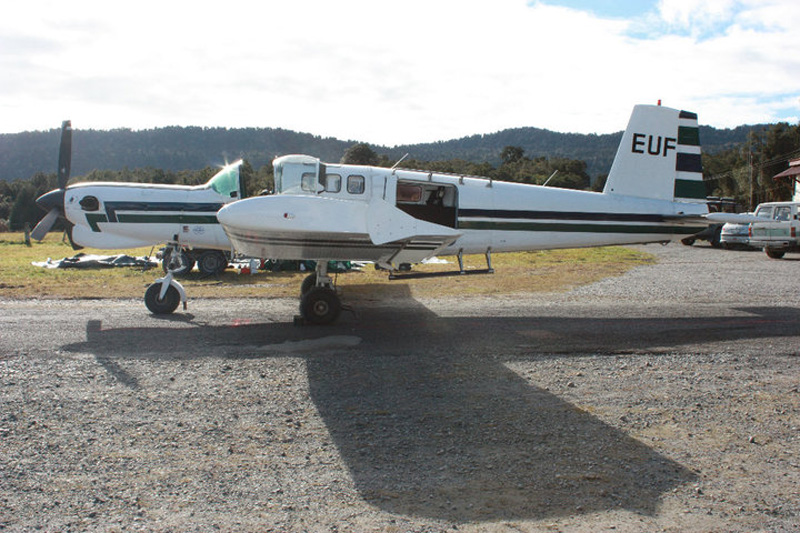 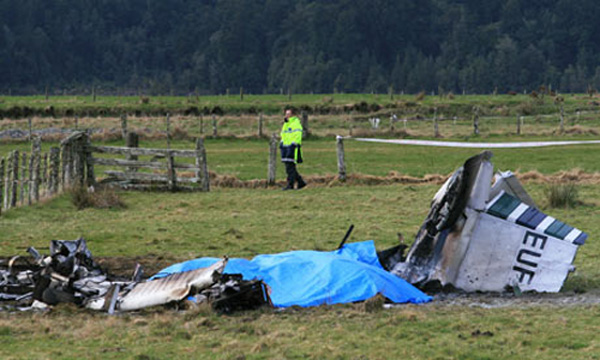 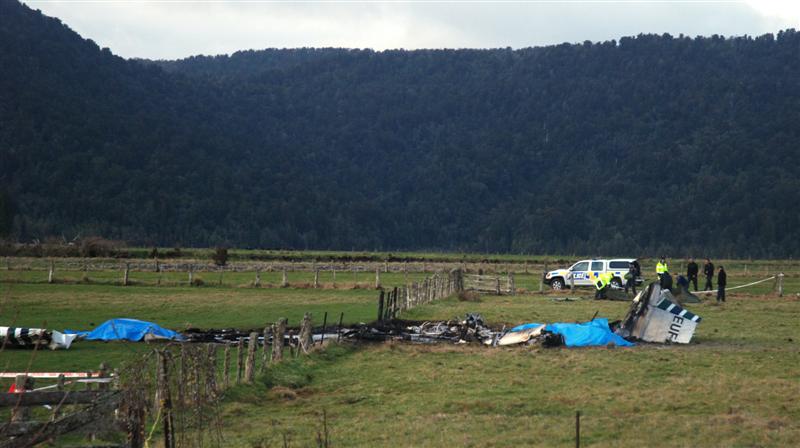 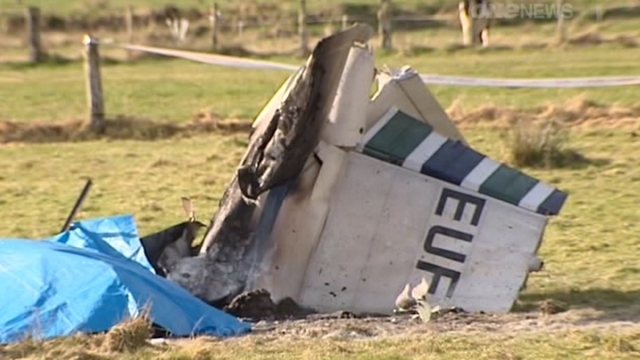 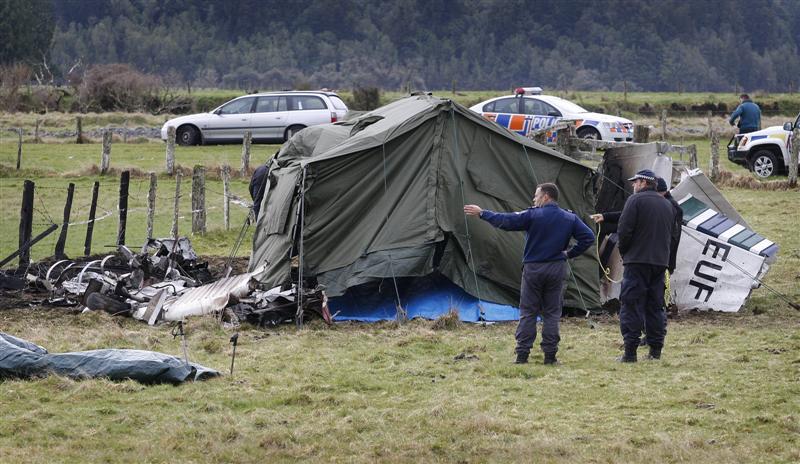