Crash of a Beechcraft A100 King Air in Charallave: 9 killed 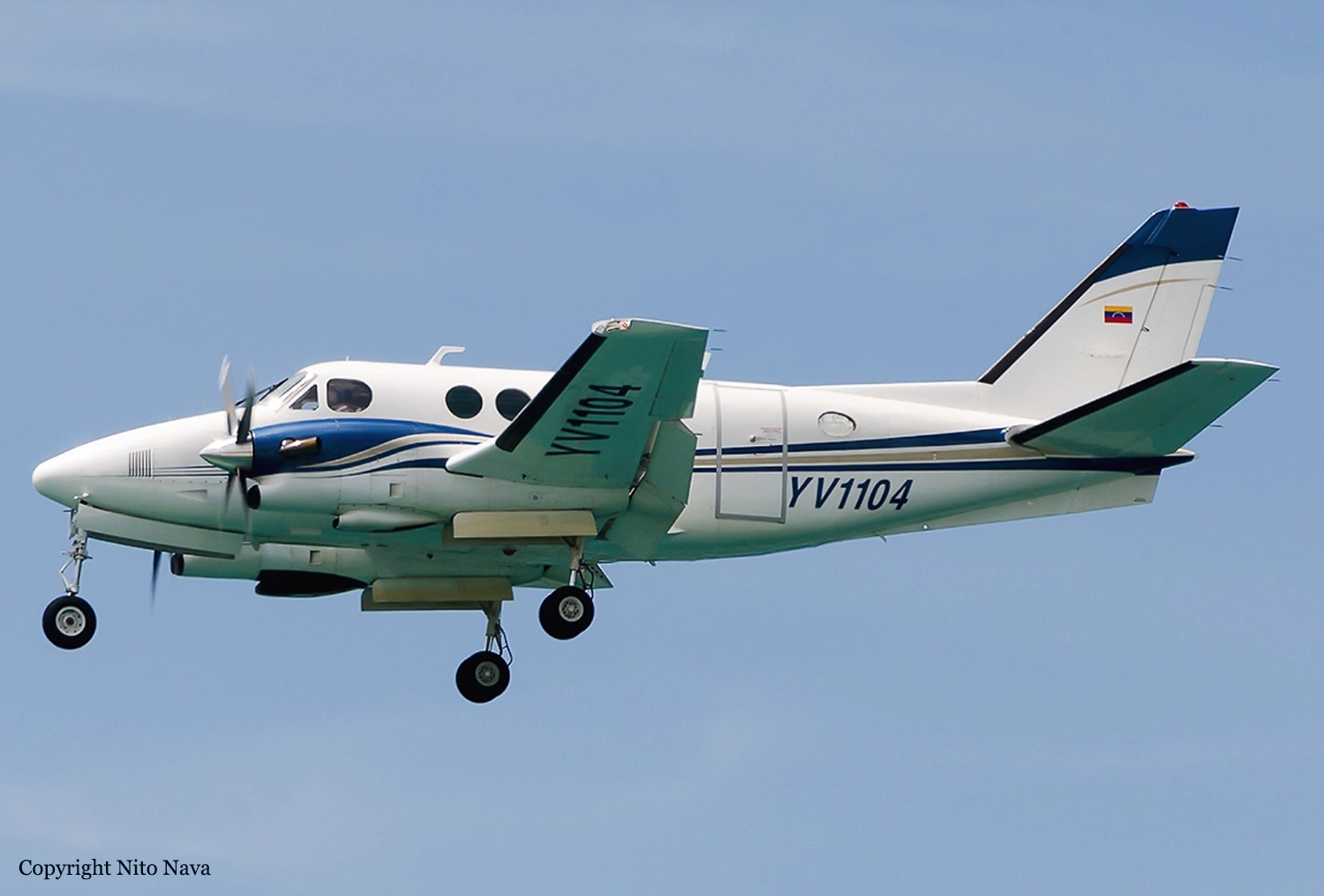 Crash of a Beechcraft A100 King Air in Itapaci

Registration:
PT-LJN
Flight Phase:
Landing (descent or approach)
Flight Type:
Charter/Taxi (Non Scheduled Revenue Flight)
Survivors:
Yes
Site:
Plain, Valley
Schedule:
Goiânia – Ceres
MSN:
B-121
YOM:
1972
Location:
Itapaci
Goiás
Country:
Brazil
Region:
South America
Crew on board:
1
Crew fatalities:
Pax on board:
9
Pax fatalities:
Other fatalities:
Total fatalities:
0
Circumstances:
The twin engine airplane departed Goiânia-Santa Genoveva Airport at 0810LT on a charter flight to Ceres, carrying nine passengers and one pilot. En route, it was decided to change the itinerary and to land in Itapaci where there was no suitable terrain for landing. On final approach, the aircraft impacted ground, lost its undercarriage and veered to the right. It collided with a fence and made a 180 turn before coming to rest. All 10 occupants evacuated safely and the aircraft was damaged beyond repair. On board was the candidate for governor of the state of Goiás and his campaign team.
Probable cause:
The pilot intentionally changed his routing for Itapaci where the landing zone was not approved for flight operations. During the landing, the plane struck the ground before the planned zone and crashed. The pilot violated the rules established by the authority.
Final Report: 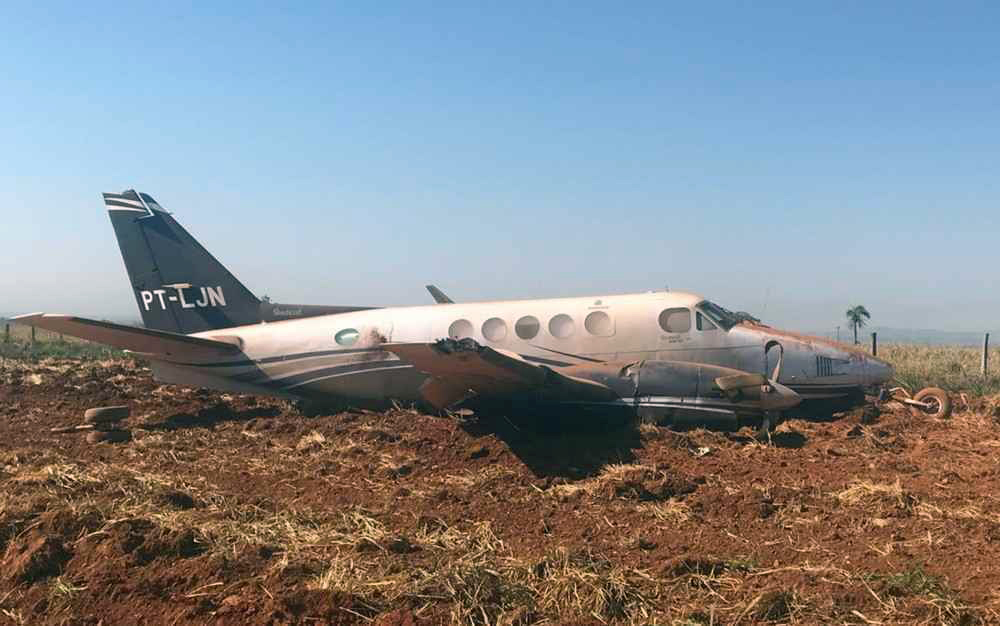 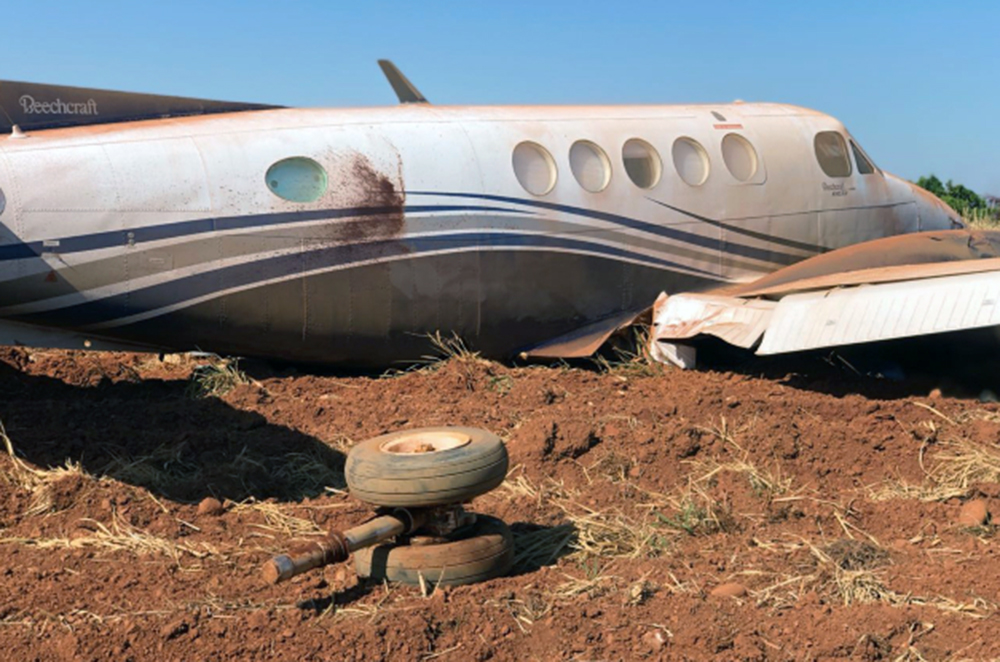 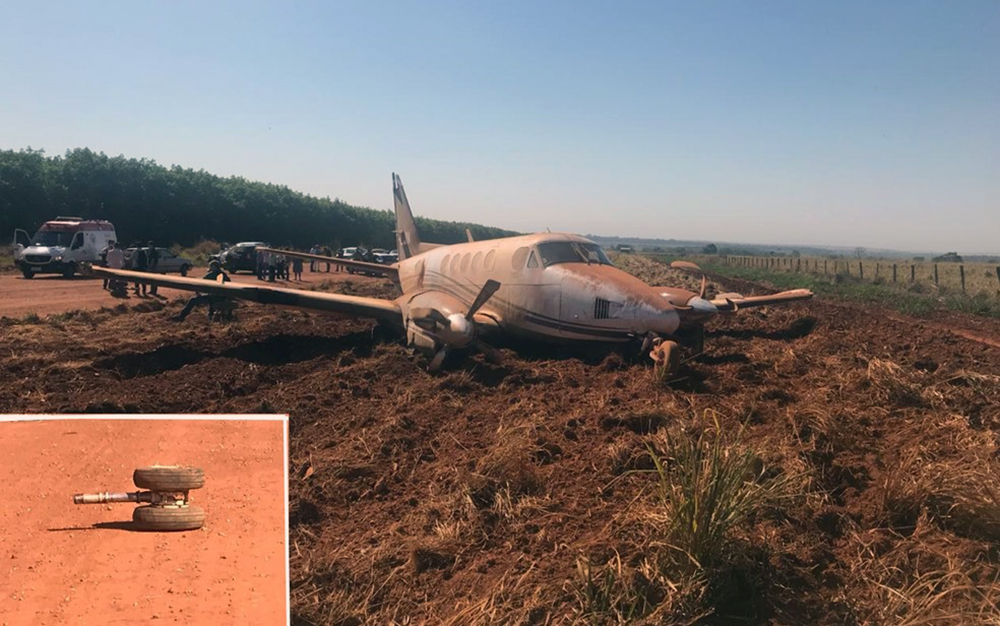 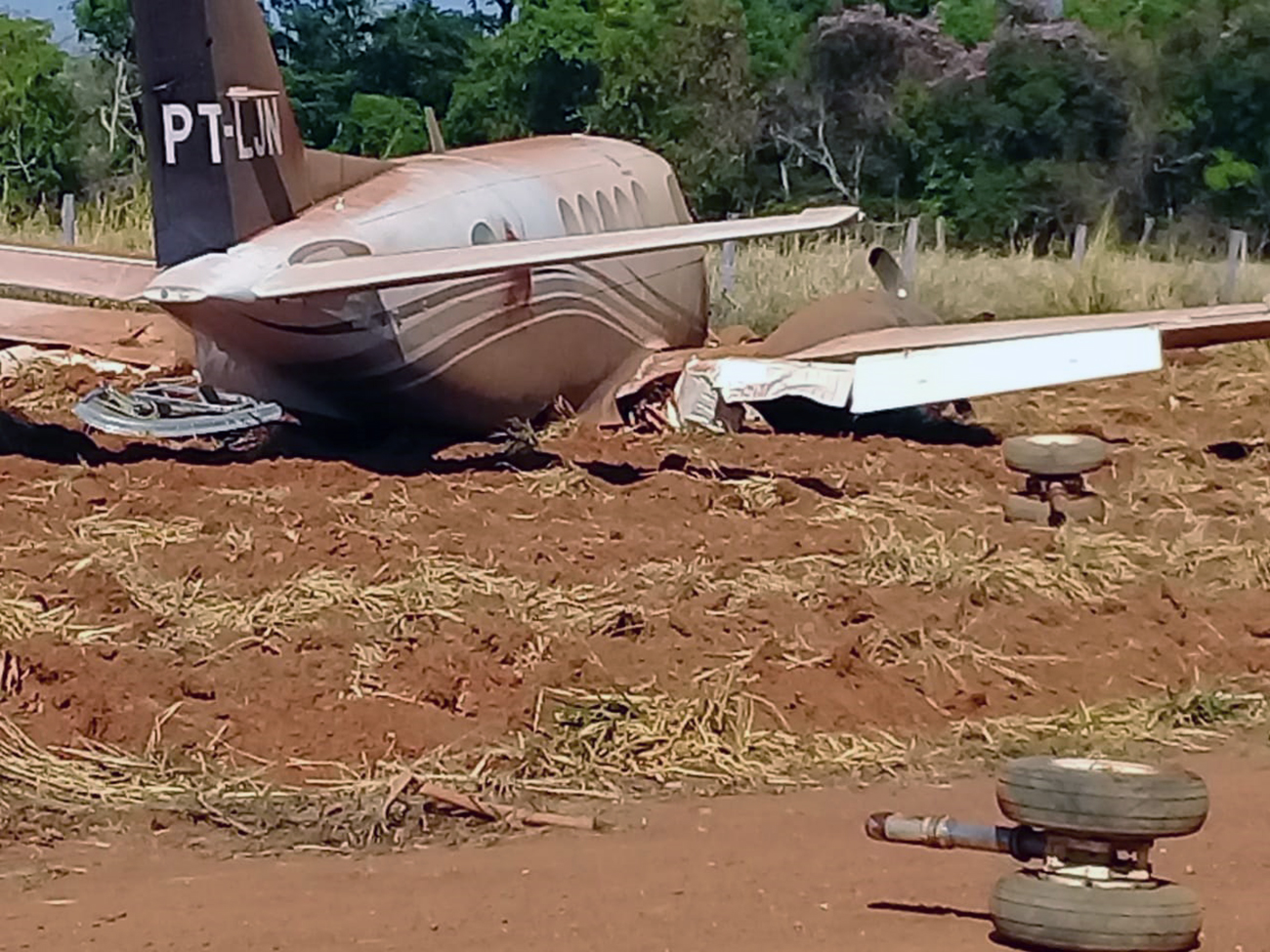 Crash of a Beechcraft B100 King Air in Abbotsford

Registration:
C-GIAE
Flight Phase:
Takeoff (climb)
Flight Type:
Charter/Taxi (Non Scheduled Revenue Flight)
Survivors:
Yes
Site:
Airport (less than 10 km from airport)
Schedule:
Abbotsford - San Bernardino
MSN:
BE-8
YOM:
1976
Flight number:
IAX640
Location:
Abbotsford
British Columbia
Country:
Canada
Region:
North America
Crew on board:
1
Crew fatalities:
Pax on board:
9
Pax fatalities:
Other fatalities:
Total fatalities:
0
Captain / Total flying hours:
10000
Captain / Total hours on type:
800.00
Aircraft flight hours:
10580
Circumstances:
Weather conditions at Abbotsford at the time of departure consisted of a temperature of -2°C in moderate to heavy snowfall with winds of approximately 10 knots. Prior to the departure, the fuel tanks were filled to capacity and the pilot and passengers boarded the aircraft inside the operator's heated hangar. The aircraft was towed outside of the hangar without being treated with anti-ice fluid, and taxied for the departure on runway 07. Due to an inbound arrival at Abbotsford, C-GIAE was delayed for departure. Once cleared for takeoff, the aircraft had been exposed to snow and freezing conditions for approximately 14 minutes. After becoming airborne, the aircraft experienced power and control issues shortly after the landing gear was retracted. The aircraft collided with terrain within the airport perimeter. Four passengers and the pilot sustained serious injuries as a result of the accident which destroyed the aircraft.
Probable cause:
The accident was the consequence of the combination of the following findings:
- The occurrence aircraft exited a warm hangar and was exposed to 14 minutes of heavy snow in below-freezing conditions. This resulted in a condition highly conducive to severe ground icing,
- As the aircraft climbed out of ground effect on takeoff, it experienced an aerodynamic stall as a result of wing contamination,
- The pilot’s decision making was affected by continuation bias, which resulted in the pilot attempting a takeoff with an aircraft contaminated with ice and snow adhering to its critical surfaces,
- The pilot and the passenger seated in the right-hand crew seat were not wearing the available shoulder harnesses. As a result, they sustained serious head injuries during the impact sequence,
- During the impact sequence, the cargo restraint system used to secure the baggage in the rear baggage compartment failed, causing some of the baggage to injure passengers seated in the rear of the aircraft cabin,
- The aircraft was not airworthy at the time of the occurrence as a result of an incomplete airworthiness directive.
Final Report: 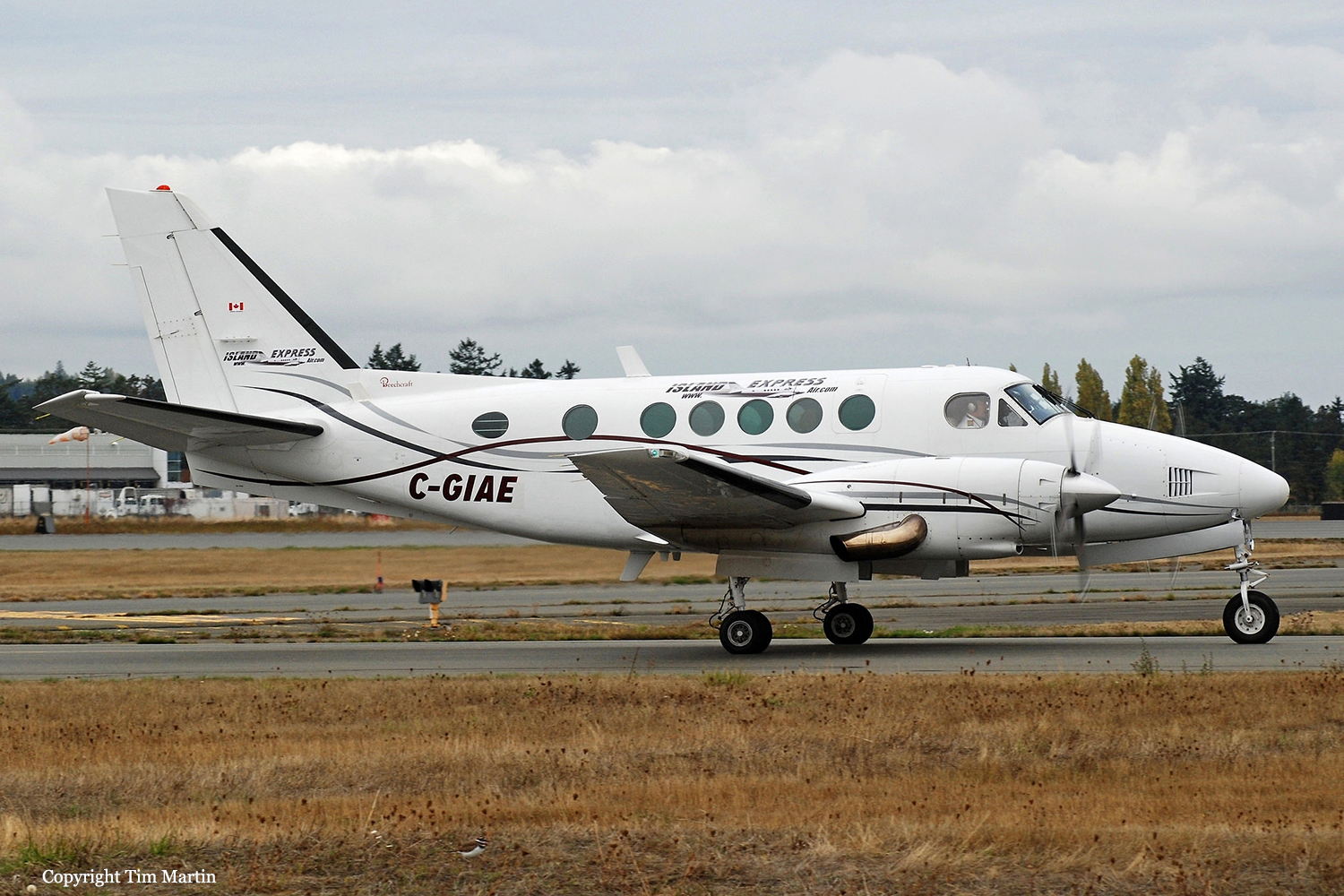 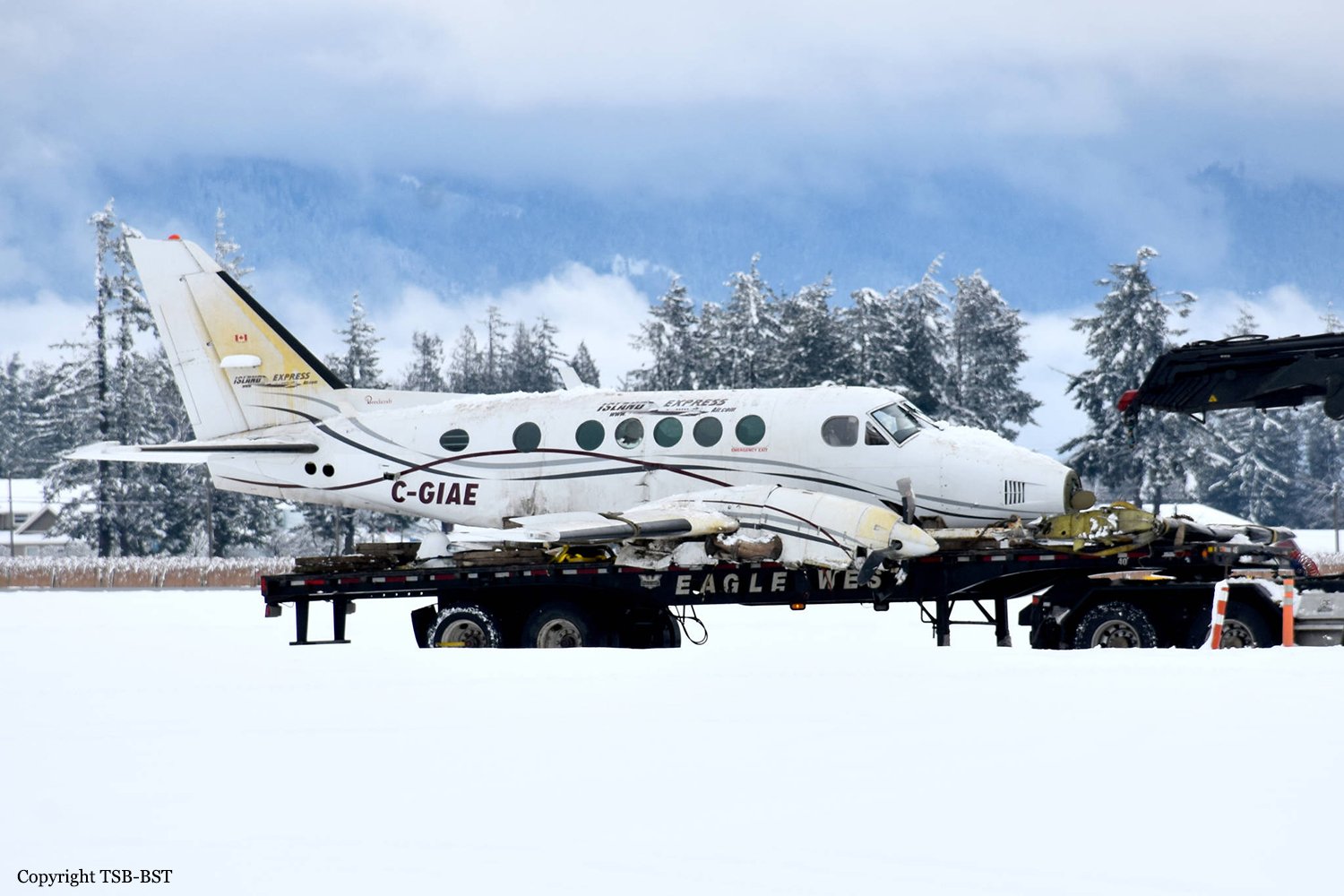 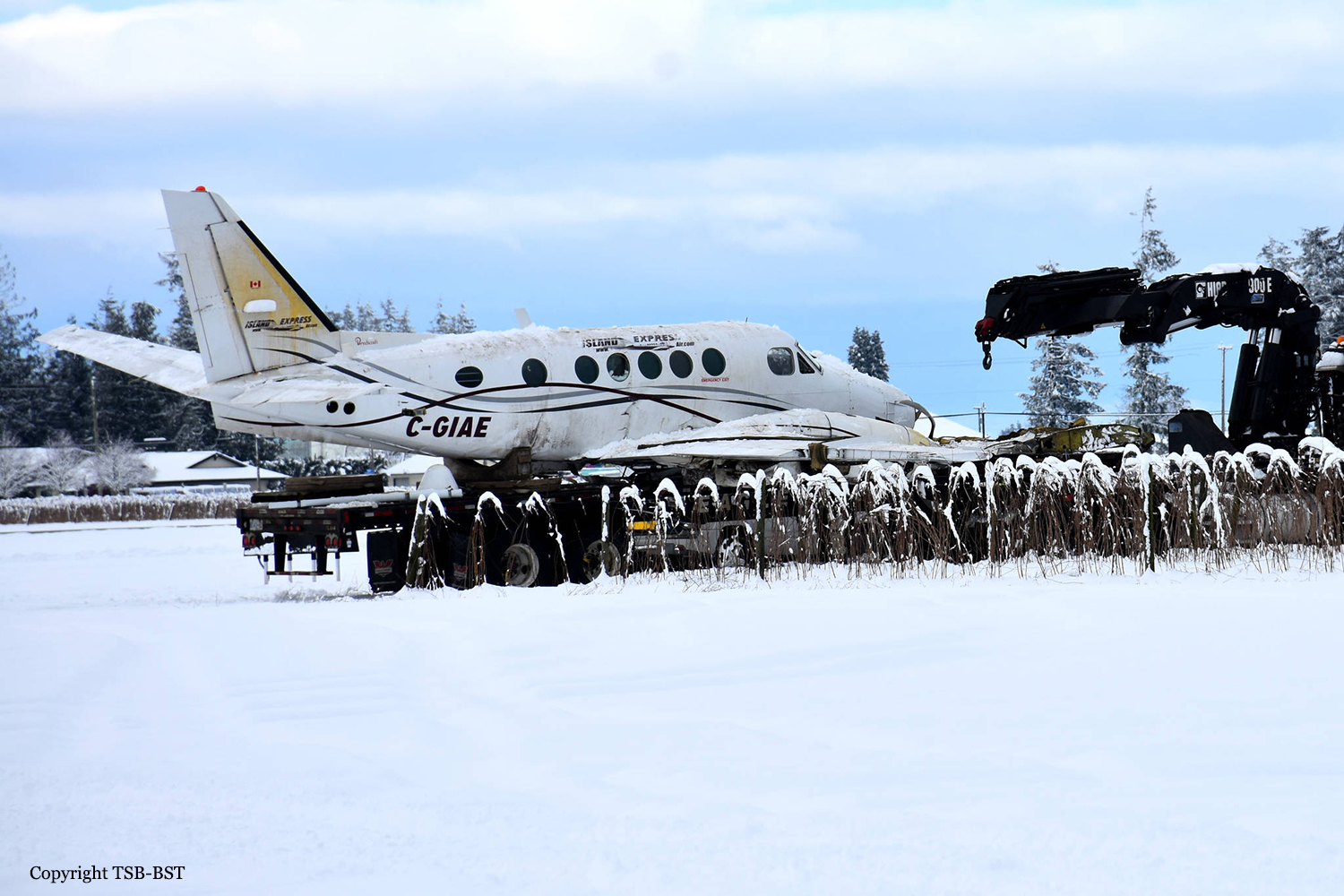 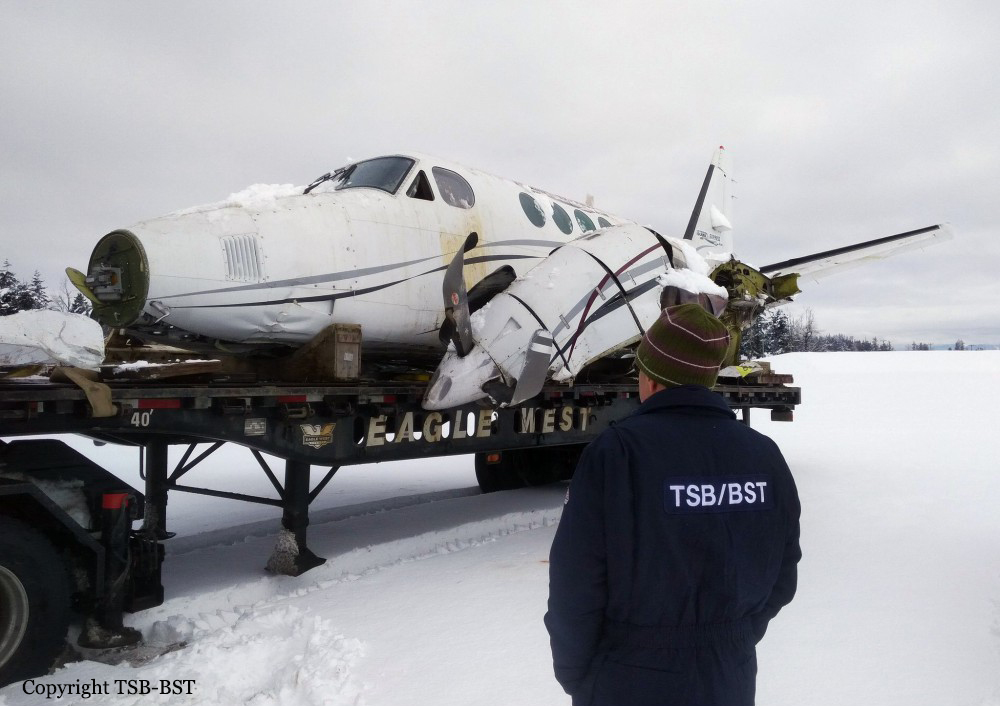 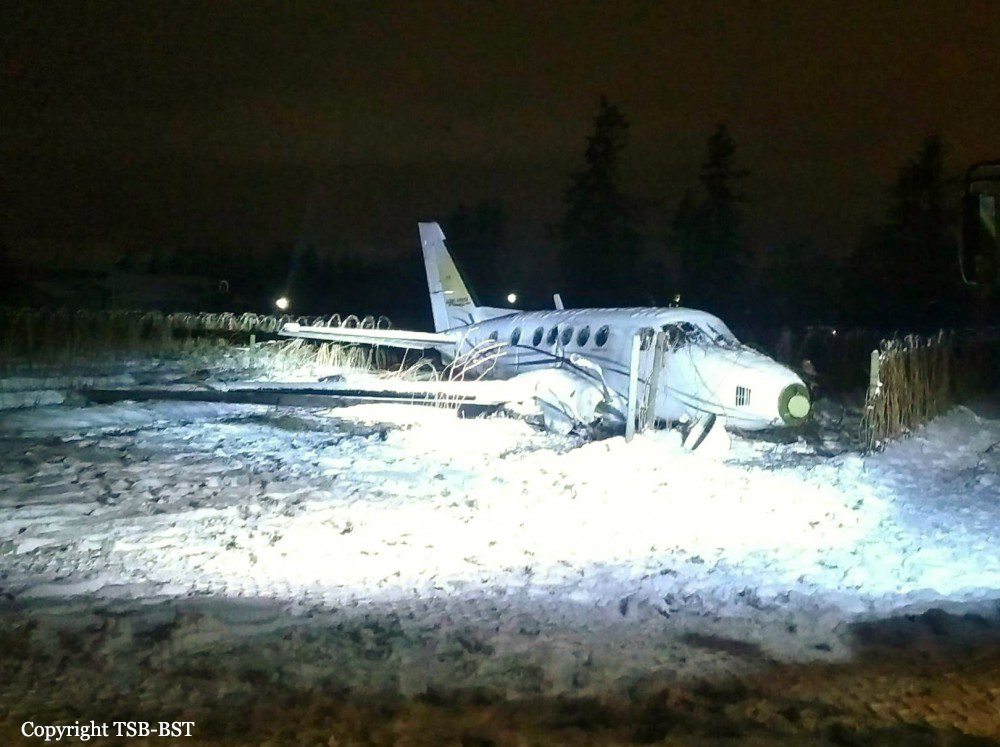 Crash of a Beechcraft A100 King Air in Saint-Frédéric

Registration:
C-FONY
Flight Phase:
Takeoff (climb)
Flight Type:
Positioning
Survivors:
Yes
Site:
Airport (less than 10 km from airport)
Schedule:
Saint-Frédéric - Quebec
MSN:
B-154
YOM:
1973
Location:
Saint-Frédéric
Quebec
Country:
Canada
Region:
North America
Crew on board:
2
Crew fatalities:
Pax on board:
0
Pax fatalities:
Other fatalities:
Total fatalities:
0
Circumstances:
During the takeoff roll from runway 05 at Saint-Frédéric Airport, the twin engine deviated to the left. The pilot-in-command elected to correct the deviation and to maintain the airplane on the runway centerline but it veered off runway to the left and came to rest in the snow. Both pilots evacuated safely and the aircraft was damaged beyond repair. 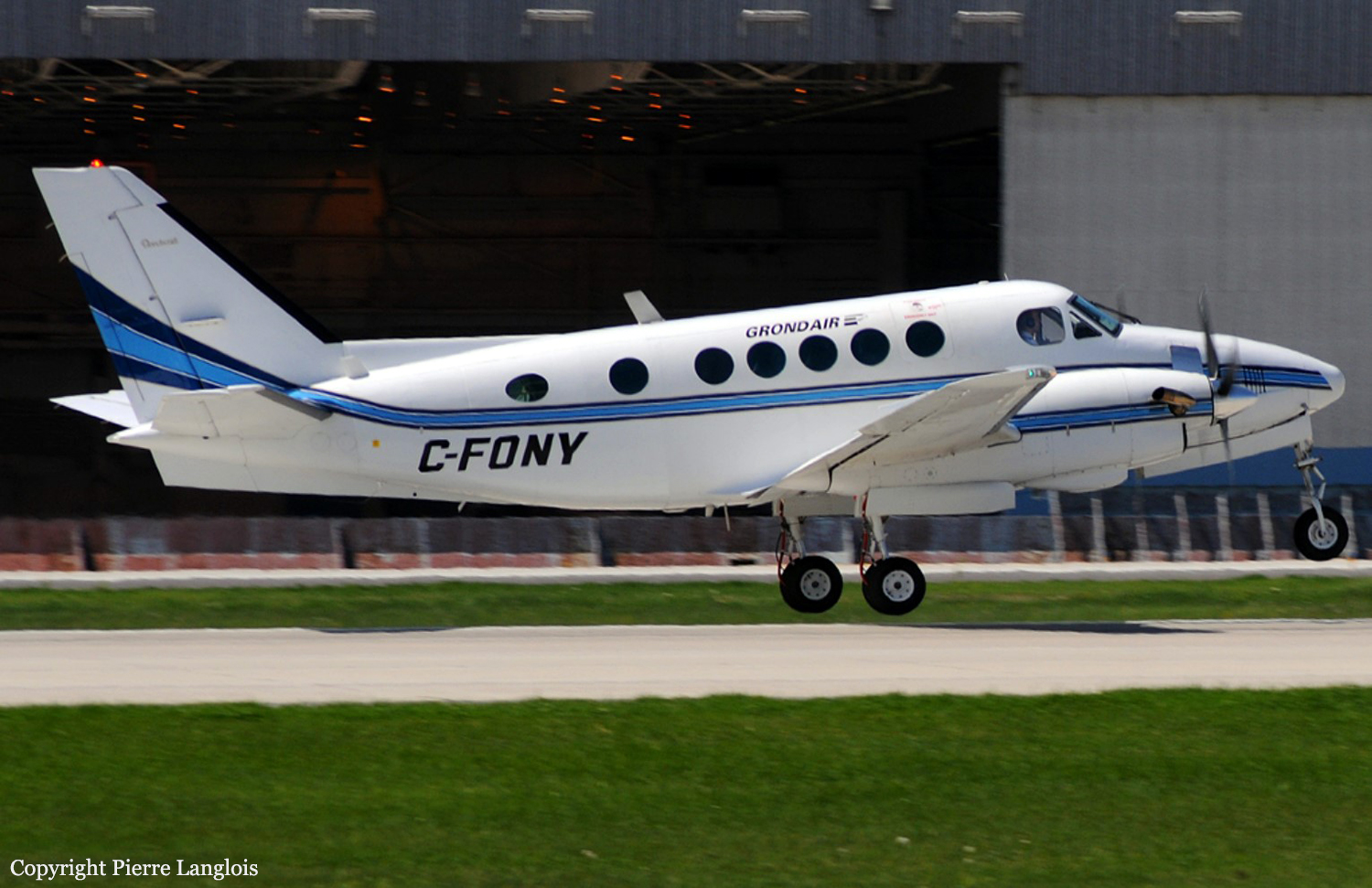 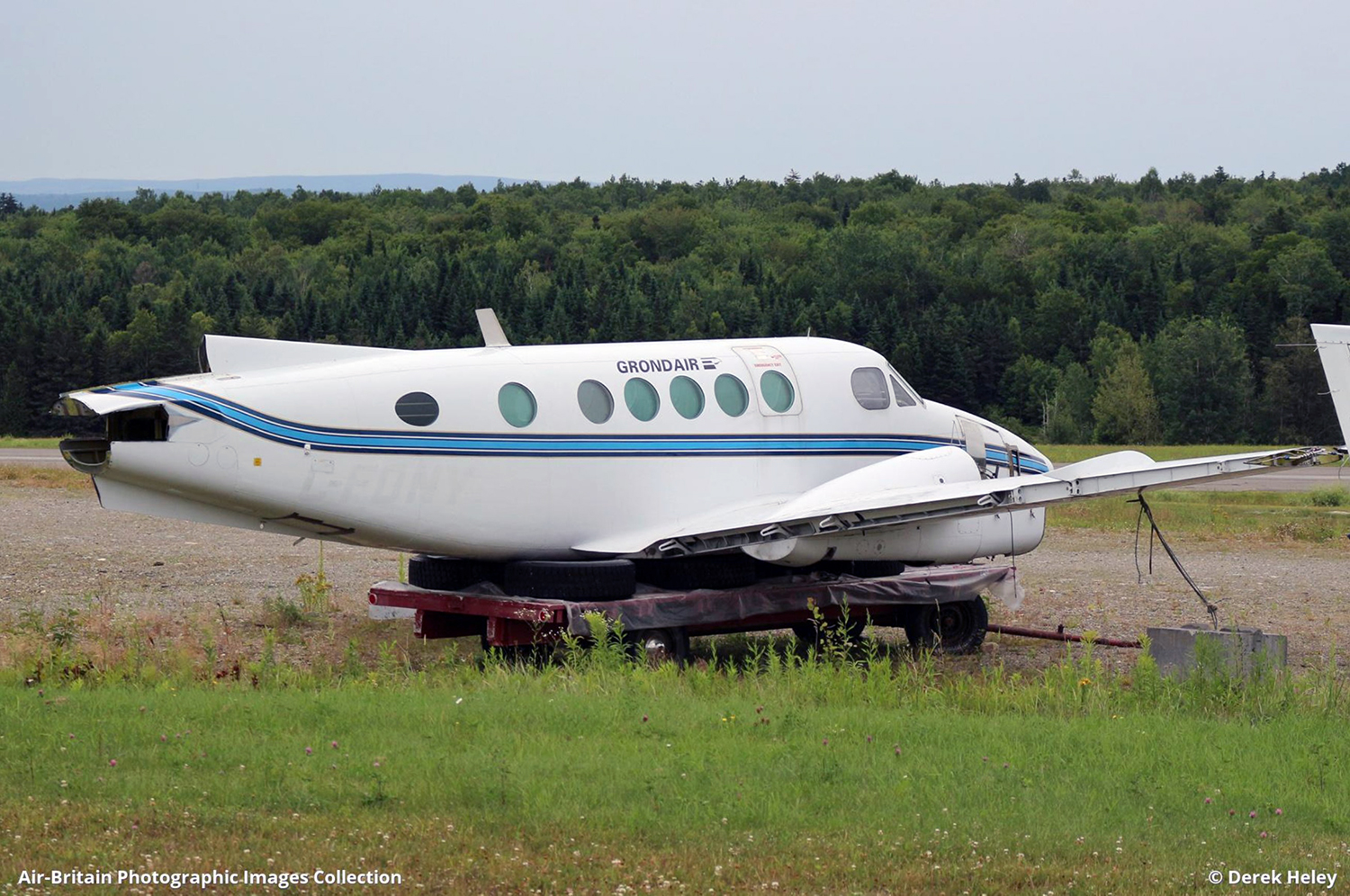 Crash of a Beechcraft 100 King Air in Jeffersonville

Registration:
N411HA
Flight Phase:
Takeoff (climb)
Flight Type:
Private
Survivors:
Yes
Site:
Airport (less than 10 km from airport)
Schedule:
Jeffersonville – Brunswick
MSN:
B-21
YOM:
1970
Location:
Jeffersonville-Clark County
Indiana
Country:
United States of America
Region:
North America
Crew on board:
2
Crew fatalities:
Pax on board:
8
Pax fatalities:
Other fatalities:
Total fatalities:
0
Captain / Total flying hours:
13142
Captain / Total hours on type:
34.00
Copilot / Total flying hours:
1605
Copilot / Total hours on type:
3
Aircraft flight hours:
12583
Circumstances:
The airline transport pilot, who was the pilot flying, and commercial pilot, who was the pilot not flying and was acting as a safety pilot and was not expected to know the airplane's systems, limitations, or characteristics, were preparing to depart for a personal flight with eight passengers on board. When the pilot arrived at the airport, he determined that the airplane had 900 lbs of fuel onboard. He instructed the lineman to fuel the airplane with 211 gallons of fuel (1,413.7 lbs) for a fuel total of 2,313.7 lbs. The pilot reported that he was aware that the total weight of the eight passengers, their bags, and the fuel caused the airplane to be overweight but that he did not complete a weight and balance form or determine the expected takeoff performance before the flight. He informed the other pilot that the flight would be heavy, but he did not tell him how much the airplane exceeded the airplane's maximum gross takeoff weight. After the accident, the pilot determined that the airplane was 623 lbs over the maximum gross takeoff weight. The pilot reported that the airplane's flight controls and engines were operating normally during the pretakeoff check and that the elevator pitch trim was positioned in the "green" range. The pilot taxied the airplane onto the runway and applied the brakes and increased the throttles to takeoff power before releasing the brakes for the takeoff roll. However, he did not confirm the power settings that he applied when he advanced the throttles. The airplane did not accelerate as quickly as the pilot expected during the takeoff roll. When the airplane was about halfway down the runway, the airspeed was 80 kts, so the pilot continued the takeoff roll, but the airplane was still not accelerating as expected. He stated that he heard the other pilot say "redline," so he decreased the power. At this point, the airplane had reached the last third of the runway, and the pilot pulled back on the control yoke to lift the airplane off the runway, but the stall warning sounded. He lowered the nose, but the airplane was near the end of the runway. He added that he did not get "on" the brakes or put the propellers into reverse pitch and that the airplane then departed the runway. The pilot veered the airplane right to avoid the instrument landing system antenna, which was 500 ft from the end of the 5,500-ft-long runway, but the left wing struck the antenna, the left main landing gear and nose gear collapsed, and both propellers contacted the ground. The airplane then skidded left before stopping about 680 ft from the end of the runway. The pilot reported that the airplane did not have any preaccident mechanical malfunctions or failures. The evidence indicates that the pilot decided to depart knowing that the airplane was over its maximum gross takeoff weight and without determining the expected takeoff performance. During the takeoff roll, he did not check his engine instruments to determine if he had applied full takeoff power, although the acceleration may have been sluggish because of the excess weight onboard. The other pilot was not trained on the airplane and was not able to provide the pilot timely performance information during the takeoff. Neither the pilot nor the other pilot called out for an aborted takeoff, and when they recognized the need to abort the takeoff, it was too late to avoid a runway excursion.
Probable cause:
The pilot's inadequate preflight planning, his decision to take off knowing the airplane was over its gross takeoff weight, and his failure to abort the takeoff after he realized that the airplane was not accelerating as expected, which resulted in a runway excursion.
Final Report: 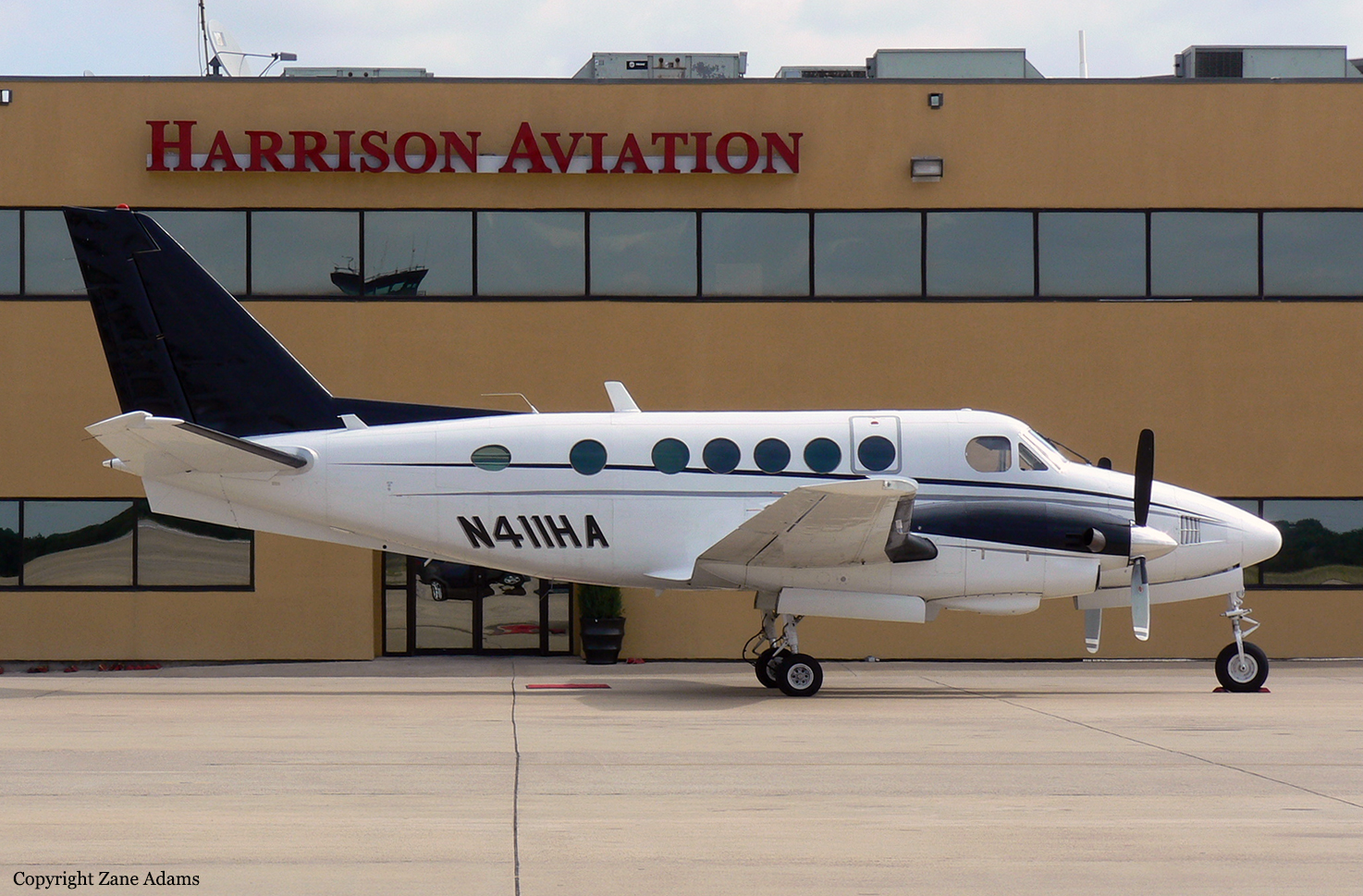 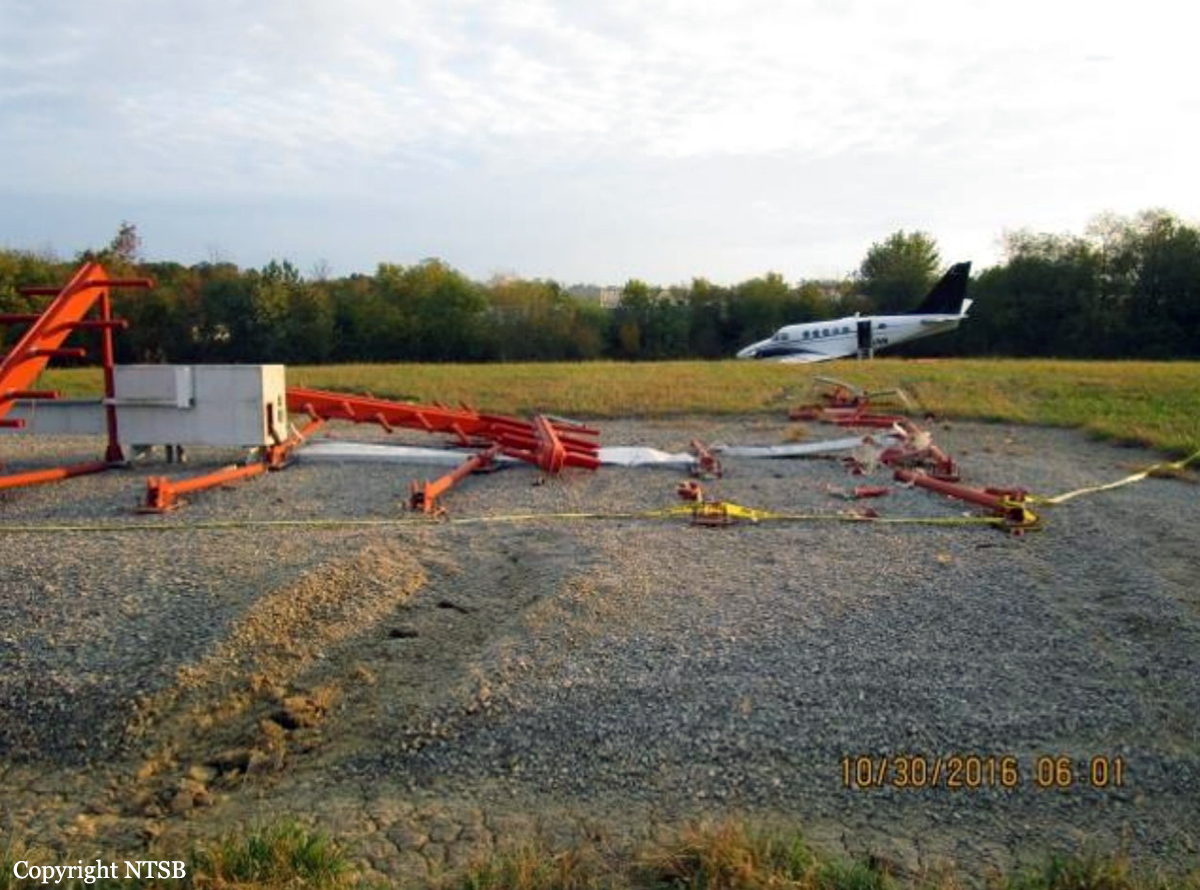 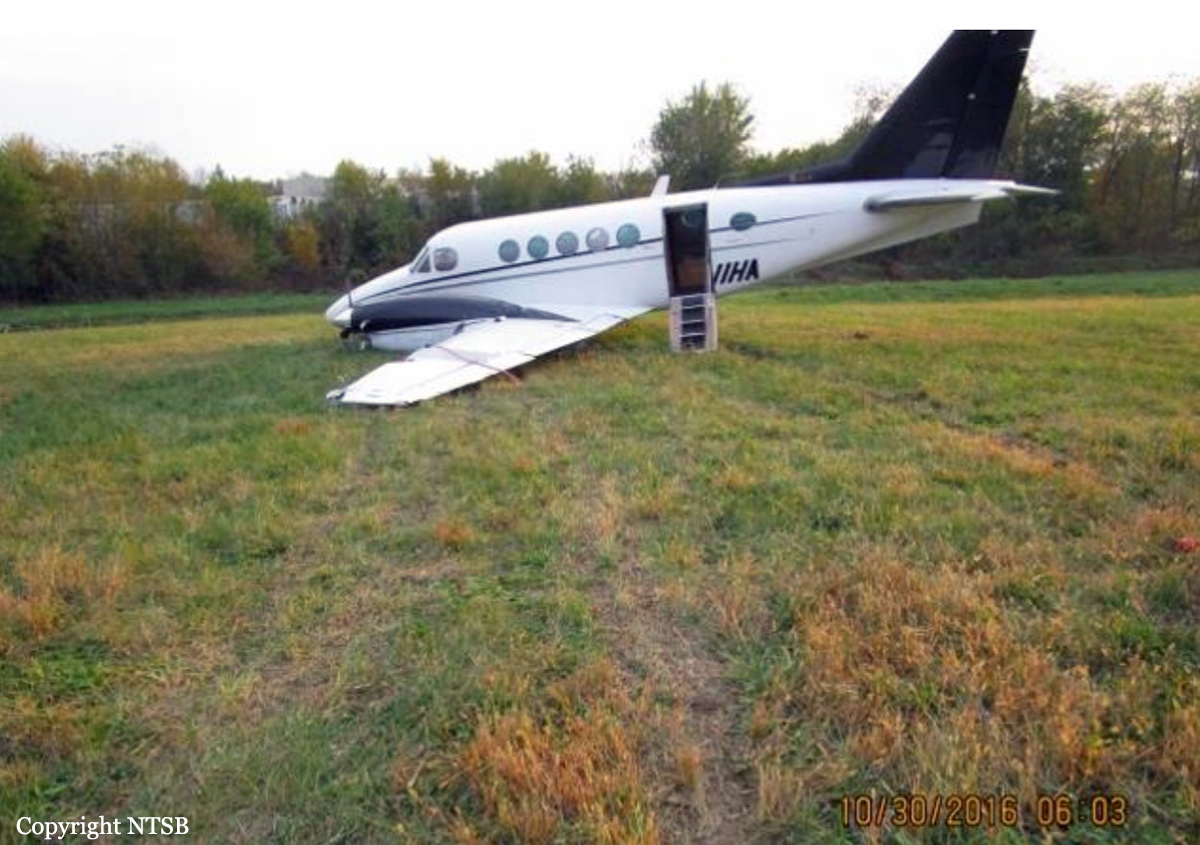 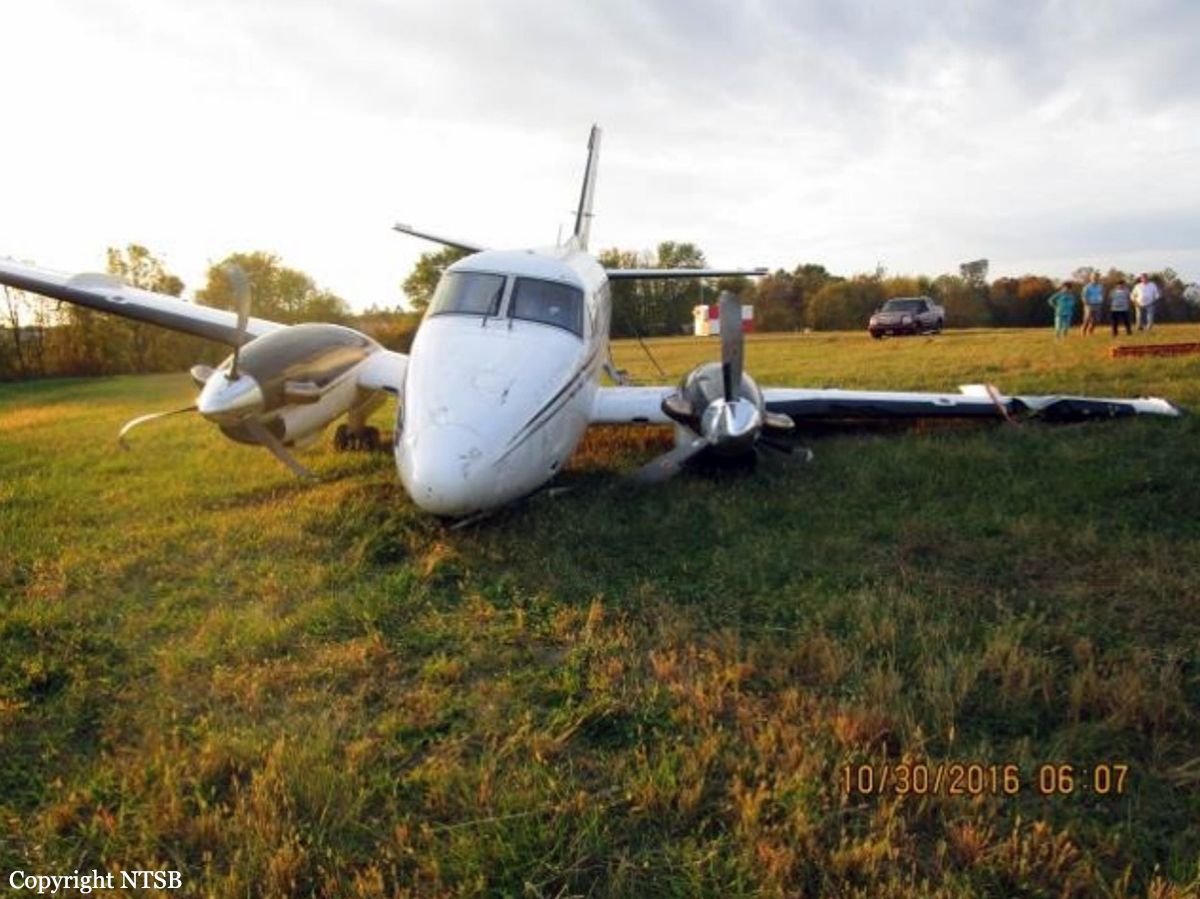 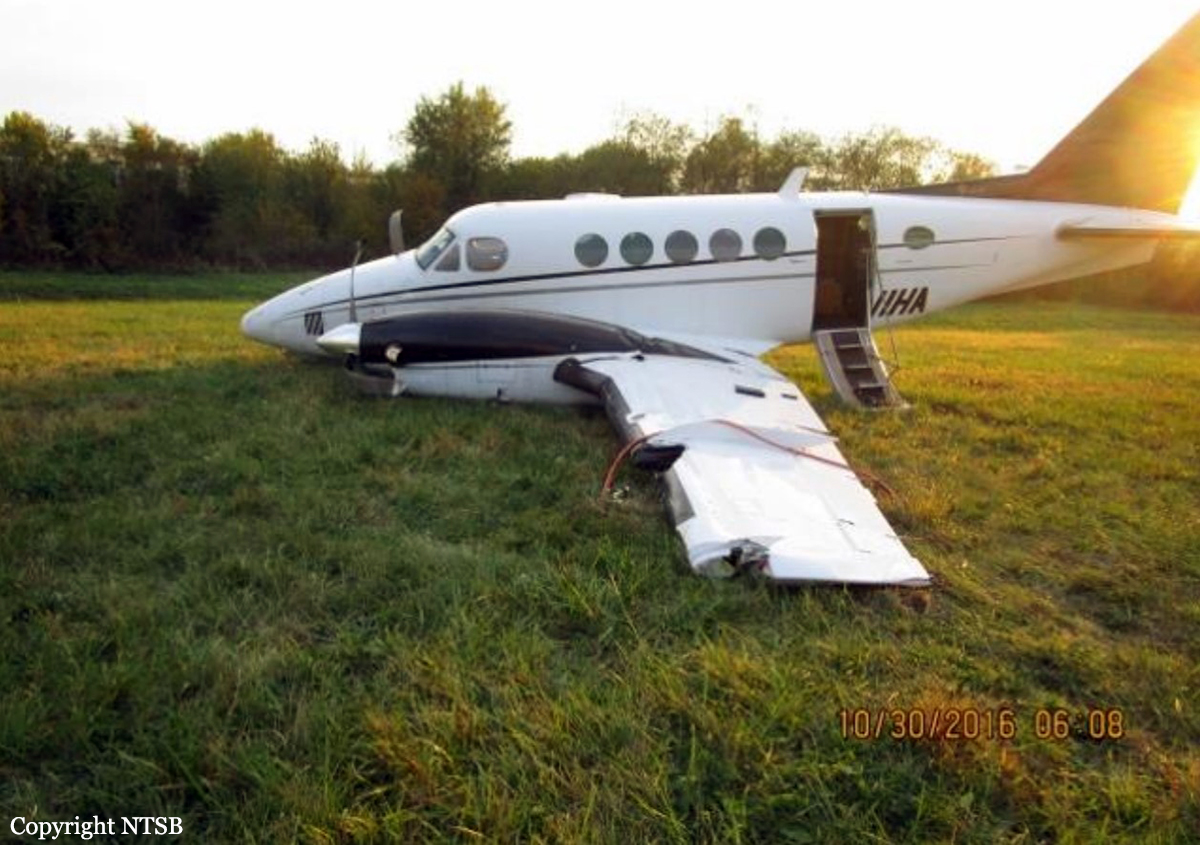 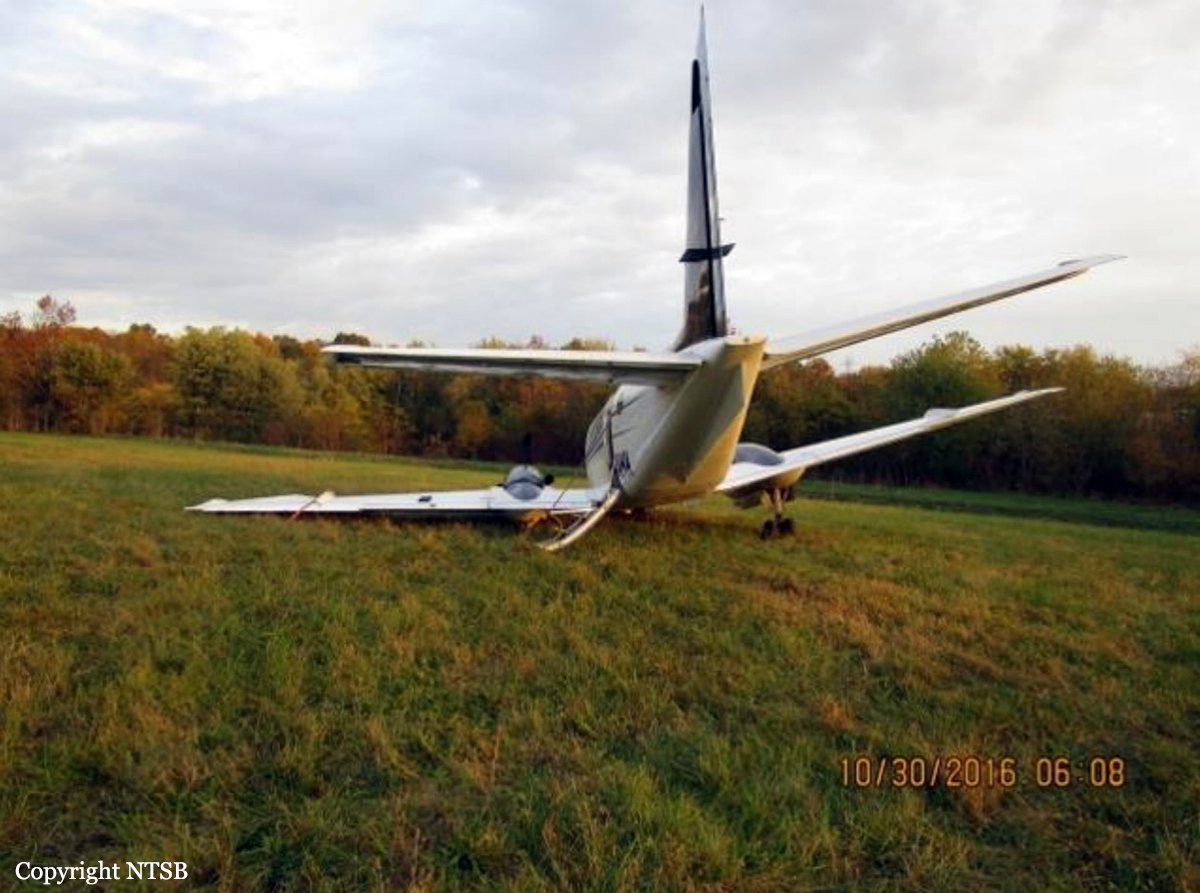 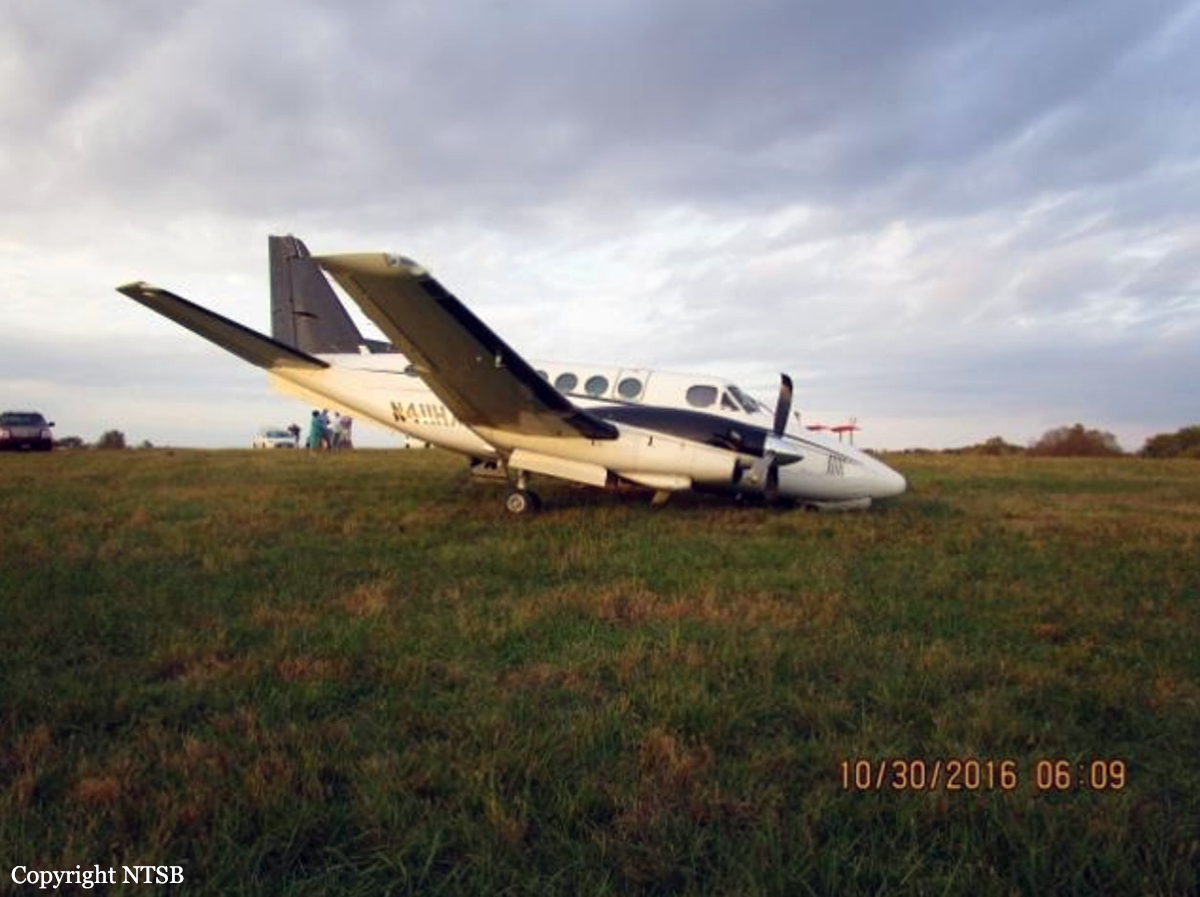 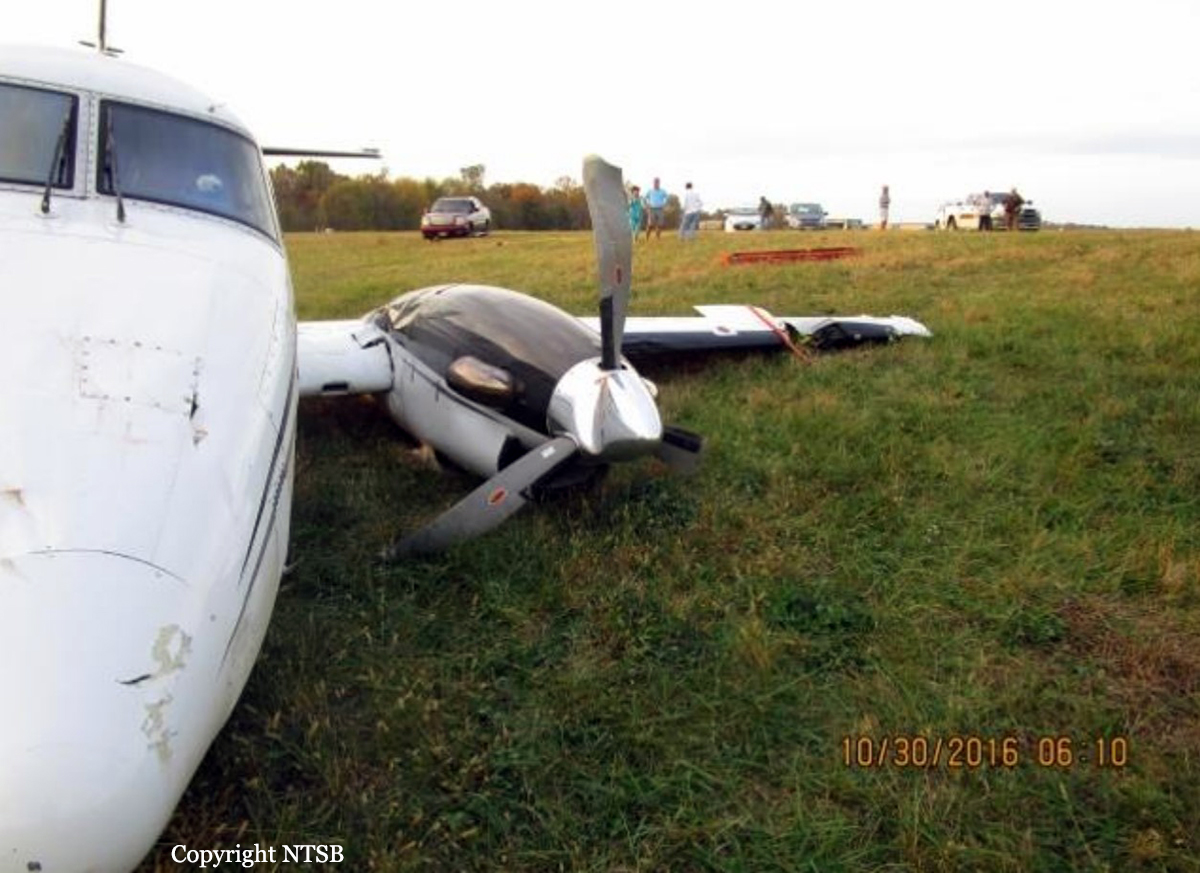 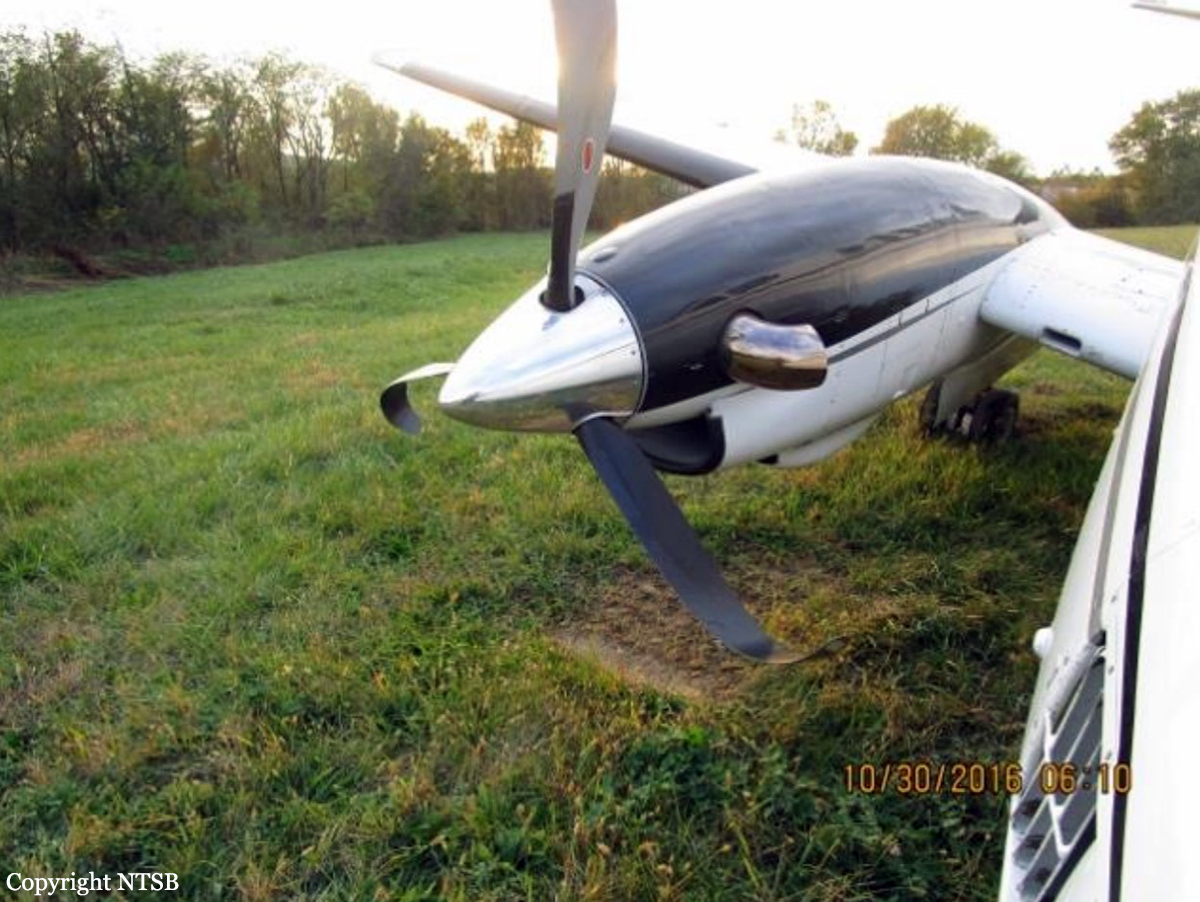 Crash of a Beechcraft B100 King Air in Jackson

Type of aircraft:
Beechcraft 100 King Air
Operator:
OIA Enterprises
Registration:
N66804
Flight Phase:
Landing (descent or approach)
Flight Type:
Ferry
Survivors:
Yes
Site:
Airport (less than 10 km from airport)
Schedule:
Memphis – Jackson
MSN:
BE-82
YOM:
1980
Location:
Jackson-McKellar Sipes
Tennessee
Country:
United States of America
Region:
North America
Crew on board:
1
Crew fatalities:
Pax on board:
0
Pax fatalities:
Other fatalities:
Total fatalities:
0
Captain / Total flying hours:
11295
Captain / Total hours on type:
570.00
Aircraft flight hours:
4013
Circumstances:
The commercial pilot reported that he had completed several uneventful flights in the multiengine airplane earlier on the day of the accident. He subsequently took off for a return flight to his home airport. He reported that the en route portion of the flight was uneventful, and on final approach for the traffic pattern for landing, all instruments were indicating normal. He stated that the airplane landed "firmly," that the right wing dropped, and that the right engine propeller blades contacted the runway. He pulled back on the yoke, and the airplane became airborne again momentarily before settling back on the runway. The right main landing gear (MLG) collapsed, and the airplane then veered off the right side of the runway and struck a runway sign and weather antenna. Witness reports corroborated the pilot's report. Postaccident examination revealed that the right MLG actuator was fractured and that the landing gear was inside the wheel well, which likely resulted from the hard landing. The pilot reported that there were no preimpact mechanical failures or malfunctions with the airframe or engine that would have precluded normal operation. Based on the pilot and witness statements and the wreckage examination, it is likely that the pilot improperly flared the airplane, which resulted in the hard landing and the collapse of the MLG.
Probable cause:
The pilot's improper landing flare, which resulted in a hard landing.
Final Report: 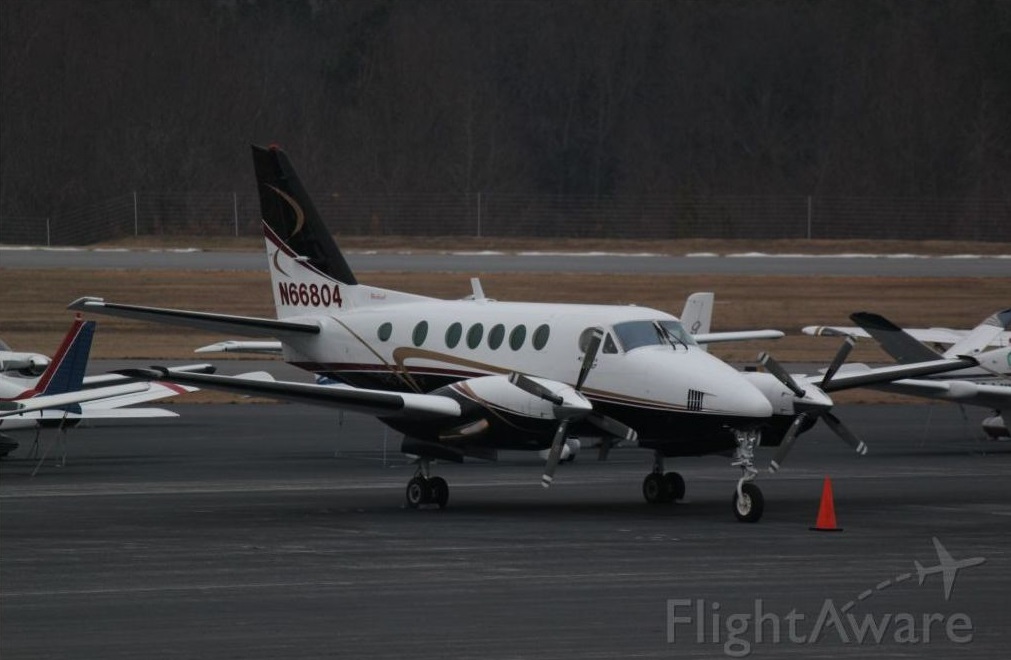 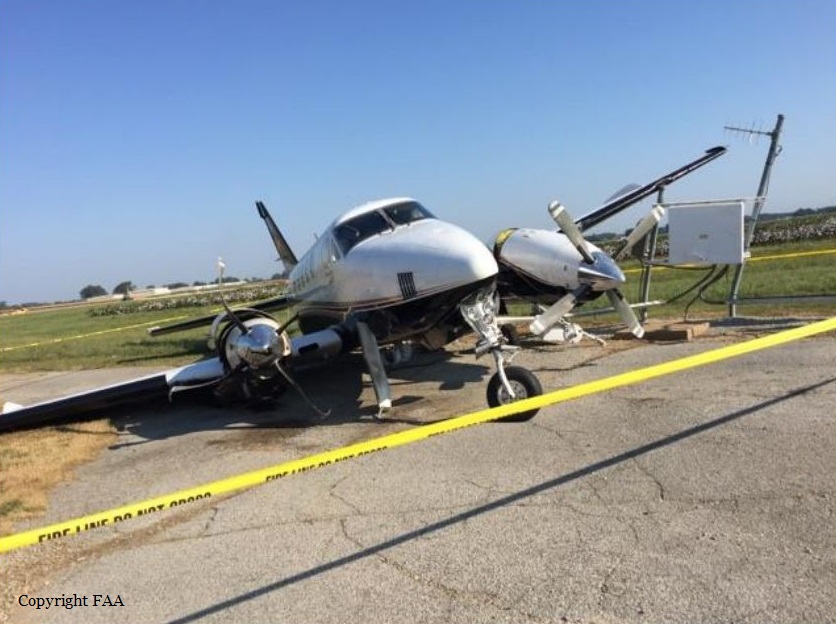