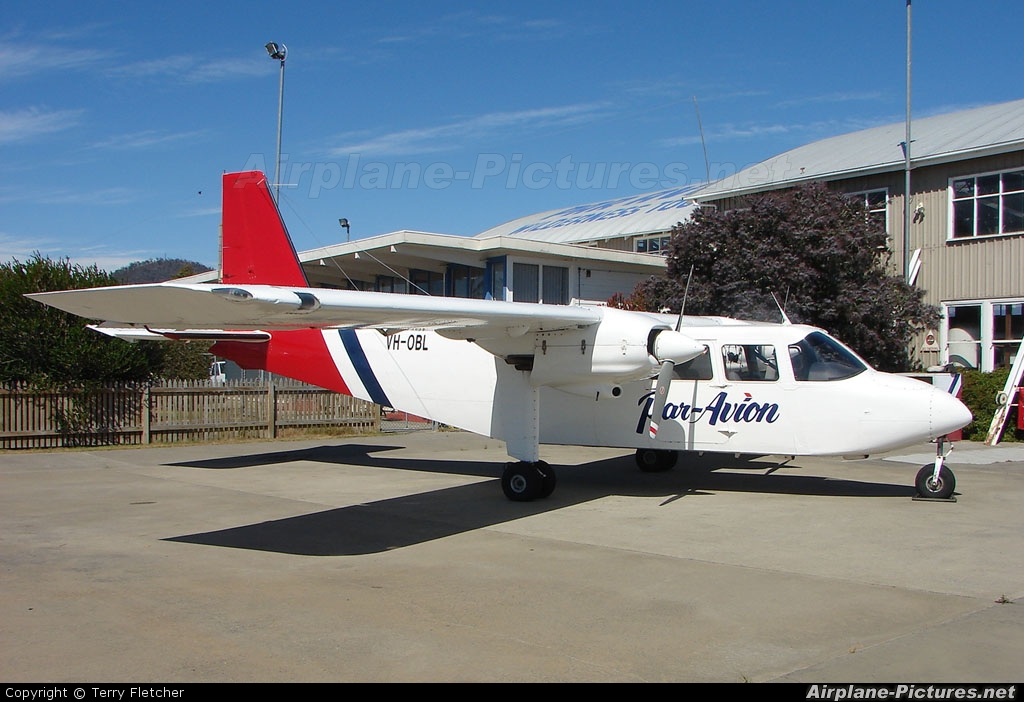 Crash of a Gippsland GA8 Airvan in Lady Barron

Registration:
VH-DQP
Flight Phase:
Landing (descent or approach)
Flight Type:
Charter/Taxi (Non Scheduled Revenue Flight)
Survivors:
Yes
Site:
Mountains
Schedule:
Lady Barron - Bridport
MSN:
GA8-05-075
YOM:
2005
Location:
Lady Barron
Tasmania
Country:
Australia
Region:
Oceania
Crew on board:
1
Crew fatalities:
Pax on board:
6
Pax fatalities:
Other fatalities:
Total fatalities:
0
Captain / Total flying hours:
2590
Captain / Total hours on type:
1355.00
Circumstances:
The pilot was conducting a charter flight from Lady Barron, Flinders Island to Bridport, Tasmania with six passengers on board. The aircraft departed Lady Barron Aerodrome at about 1700 Australian Eastern Daylight-saving Time and entered instrument meteorological conditions (IMC) several minutes afterwards while climbing to the intended cruising altitude of about 1,500 ft. The pilot did not hold a command instrument rating and the aircraft was not equipped for flight in IMC. He attempted to turn the aircraft to return to Lady Barron Aerodrome but became lost, steering instead towards high ground in the Strzelecki National Park in the south-east of Flinders Island. At about 1715, the aircraft exited cloud in the Strzelecki National Park, very close to the ground. The pilot turned to the left, entering a small valley in which he could neither turn the aircraft nor out climb the terrain. He elected to slow the aircraft to its stalling speed for a forced landing and, moments later, it impacted the tree tops and then the ground. The first passenger to exit the aircraft used the aircraft fire extinguisher to put out a small fire that had begun beneath the engine. The
other passengers and the pilot then exited the aircraft safely. One passenger was slightly injured during the impact; the pilot and other passengers were uninjured. During the night, all of the occupants of the aircraft were rescued by helicopter and taken to the hospital in Whitemark, Flinders Island.

Probable cause:
Contributing safety factors:
• The weather was marginal for flight under the visual flight rules, with broken cloud forecast down to 500 ft above mean sea level in the area.
• The pilot, who did not hold a command instrument rating, entered instrument meteorological conditions because he was adhering to an un-written operator rule not to fly below 1,000 ft above ground level.
• The pilot became lost in cloud and flew the aircraft towards the Mt Strzelecki Range, exiting the cloud in very close proximity to the terrain.
• The aircraft exited the cloud in a small valley, within which the pilot could neither turn round nor out-climb the terrain.
Other key findings:
• The aircraft exited cloud before impacting terrain and with sufficient time for the pilot to execute a forced landing.
• The design of the aircraft’s seats, and the provision to passengers in the GA-8 Airvan of three-point automotive-type restraint harnesses with inertia reel shoulder straps contributed to the passengers’ survival, almost without injury. 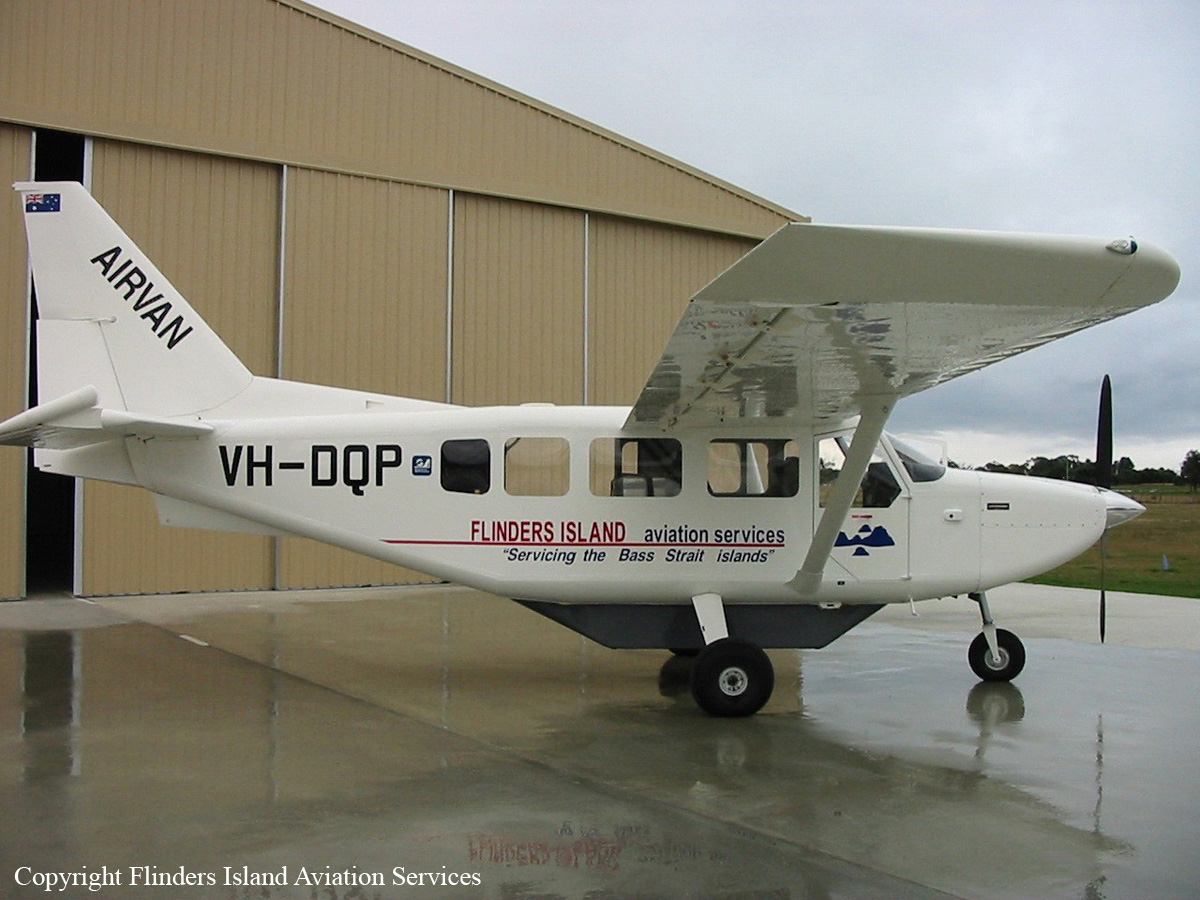 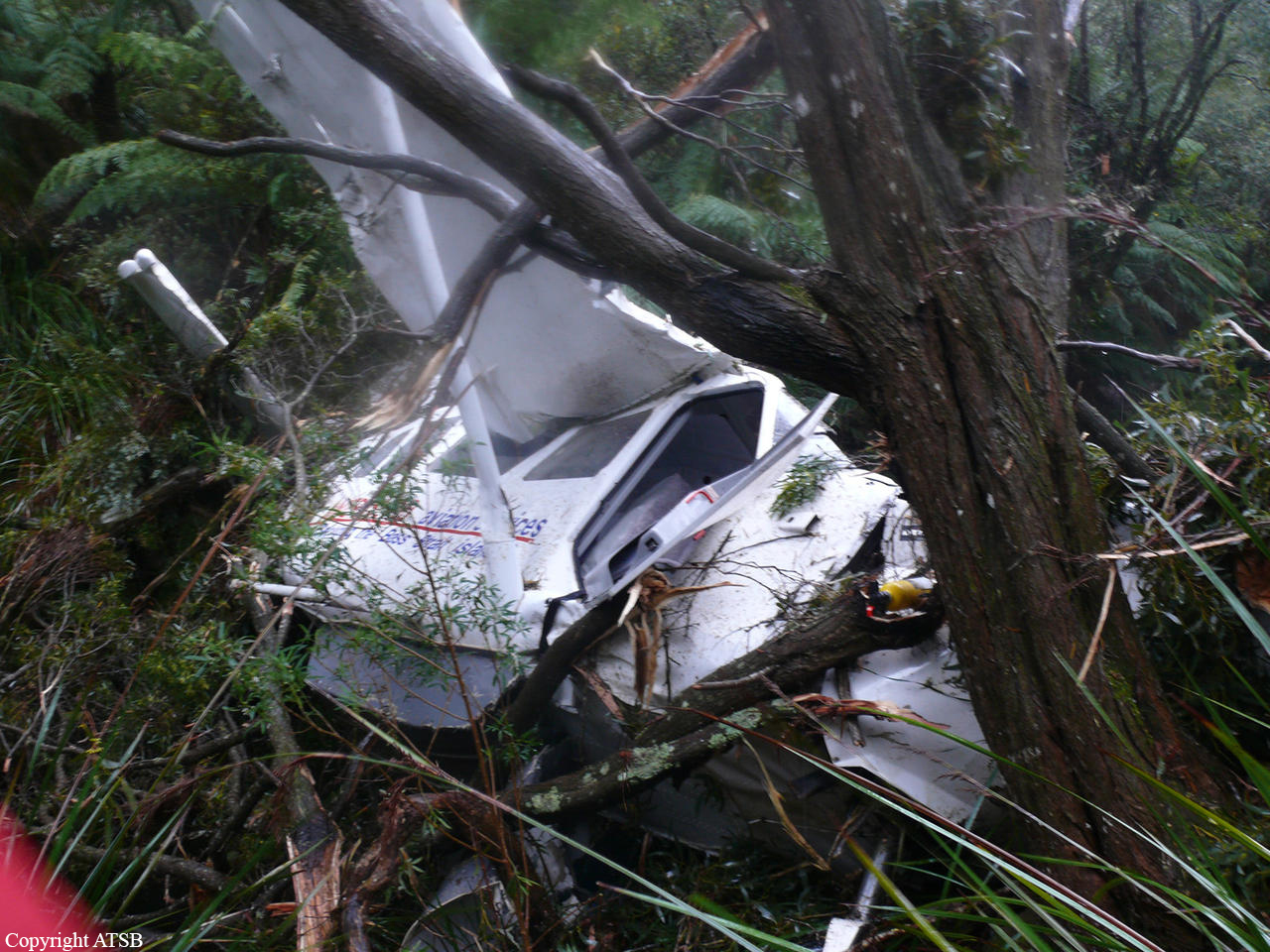 Crash of a Rockwell Shrike Commander 500S in Hobart: 1 killed 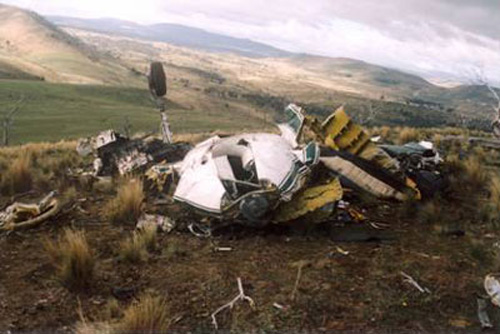 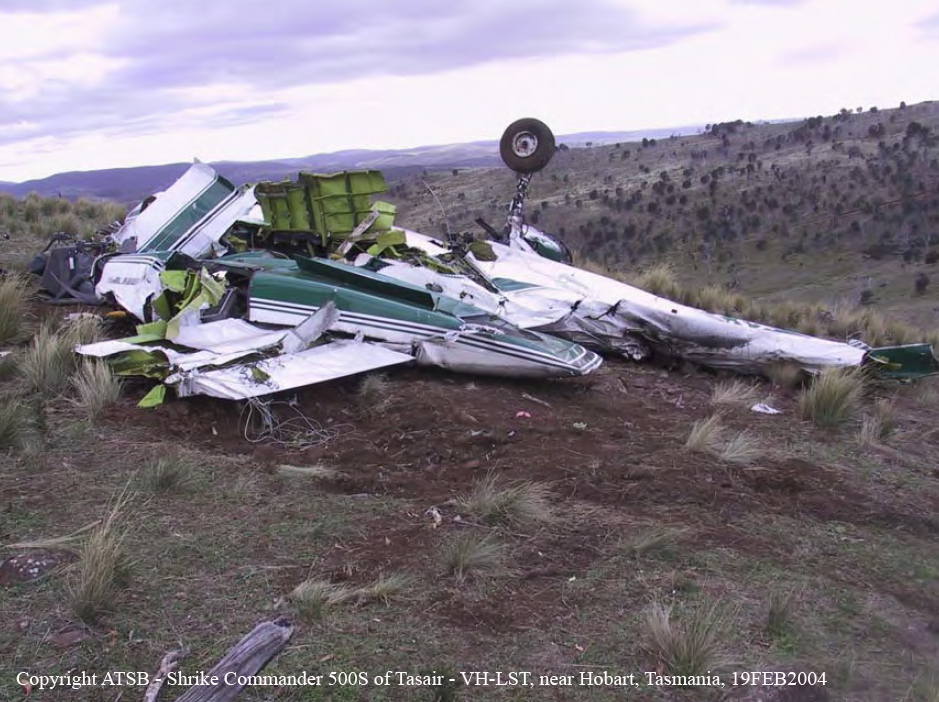 Crash of a Piper PA-31-350 Navajo Chieftain in Launceston: 6 killed 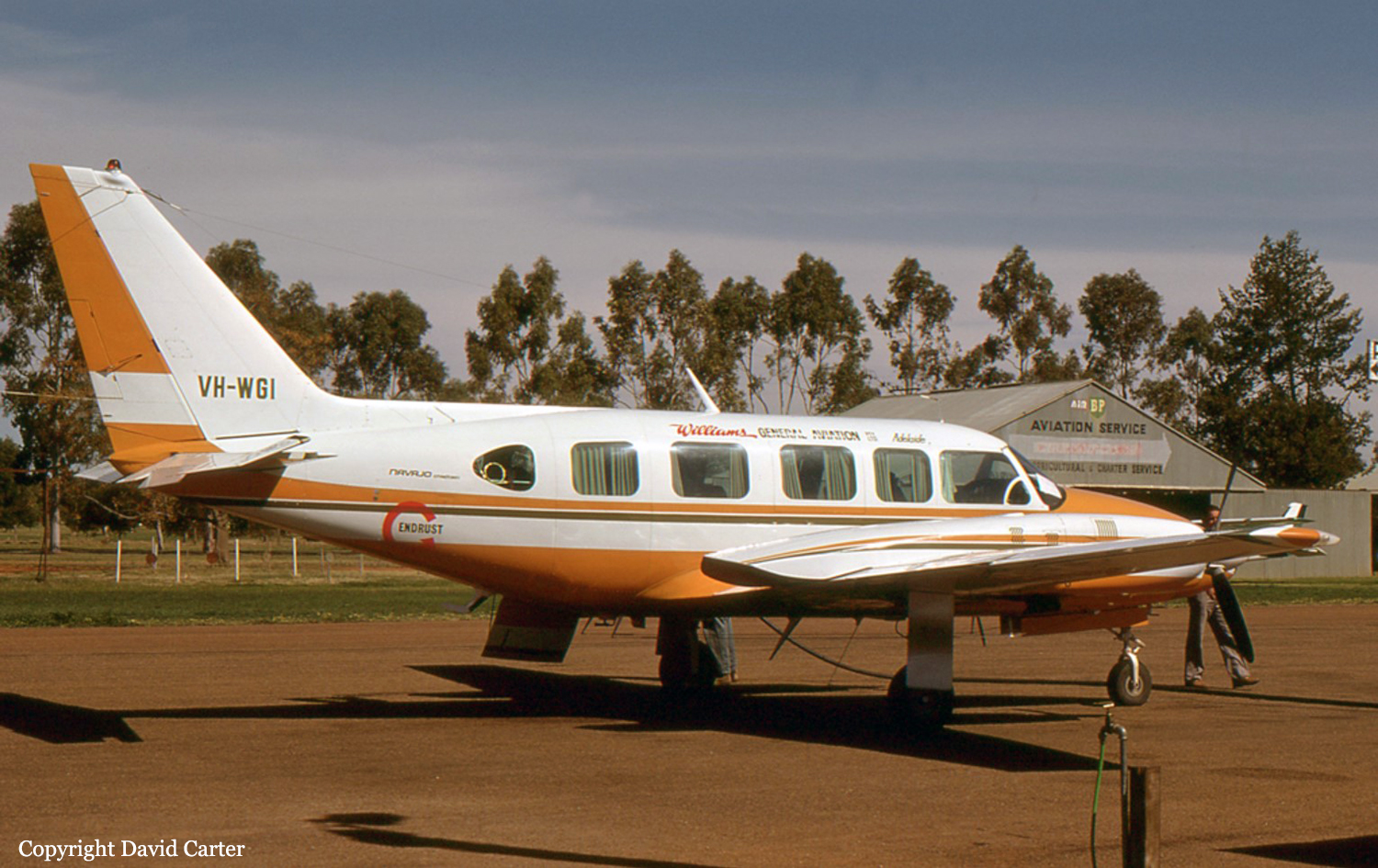 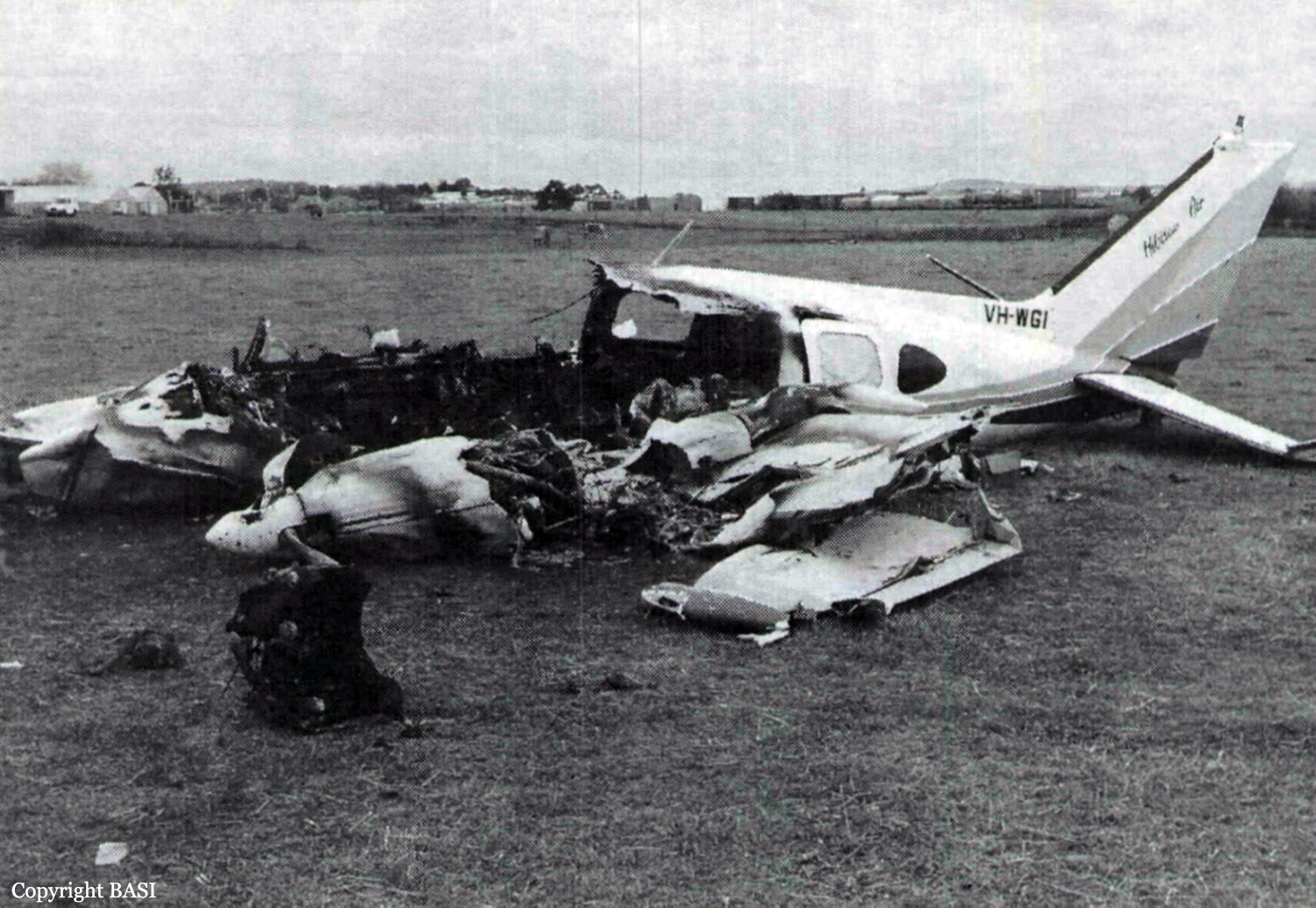 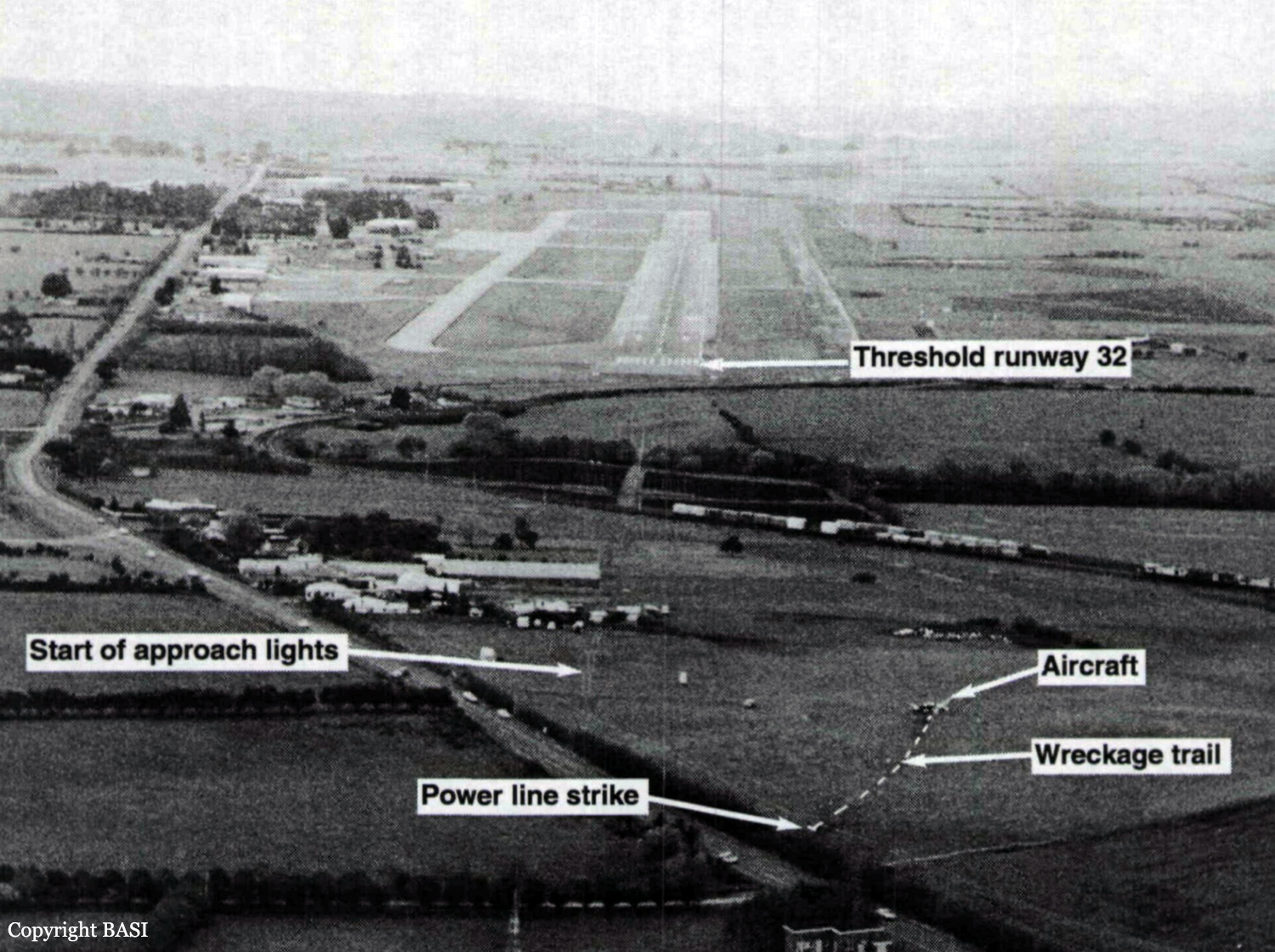 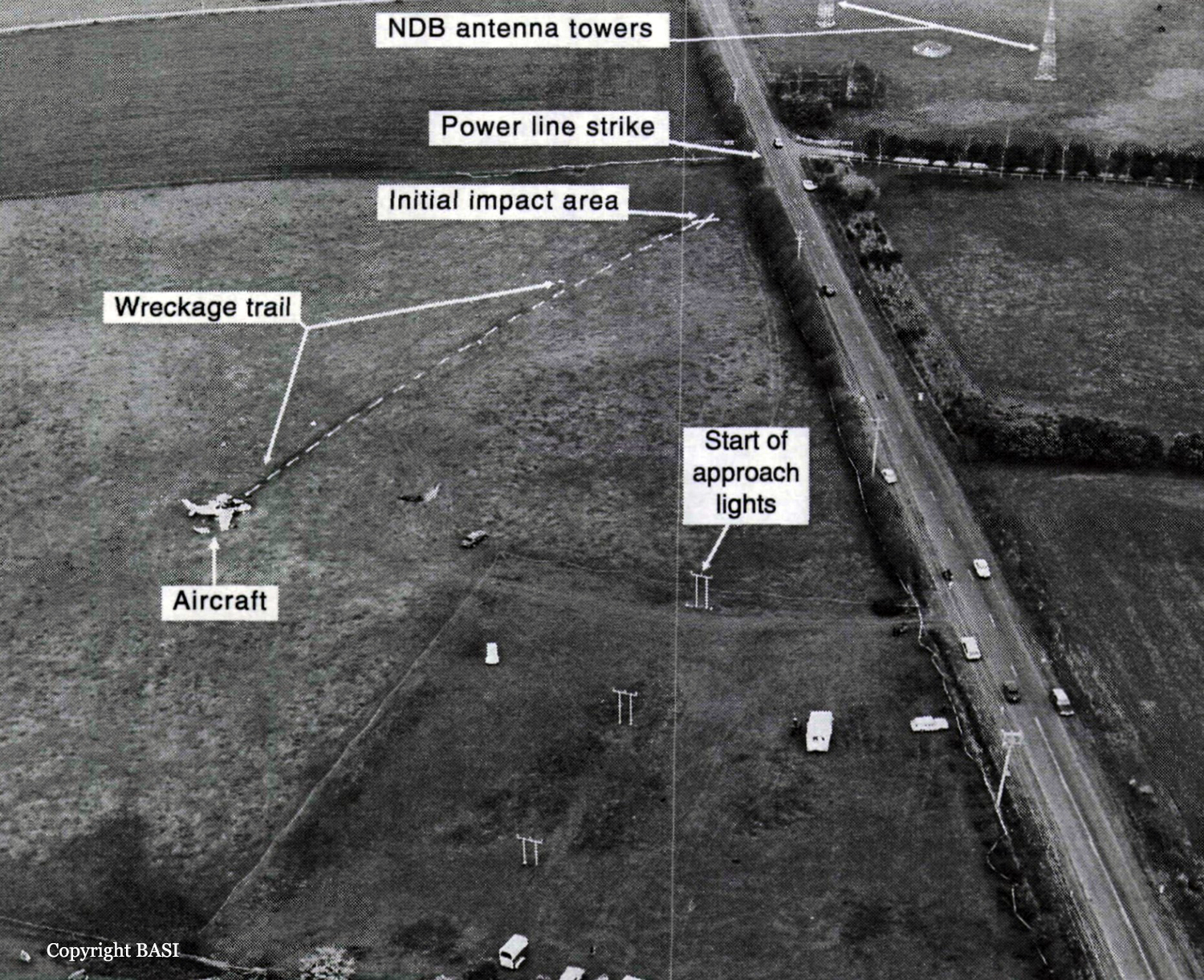 Crash of a Rockwell Grand Commander 680E in King Island

Type of aircraft:
Rockwell Grand Commander 680
Operator:
Andrew Harris
Registration:
VH-CAY
Flight Phase:
Landing (descent or approach)
Flight Type:
Private
Survivors:
Yes
Site:
Airport (less than 10 km from airport)
Schedule:
Melbourne – King Island
MSN:
680-0855-76
YOM:
1959
Location:
King Island-Currie
Tasmania
Country:
Australia
Region:
Oceania
Crew on board:
1
Crew fatalities:
Pax on board:
1
Pax fatalities:
Other fatalities:
Total fatalities:
0
Circumstances:
The King Island aerodrome weather was forecast to include temporary periods of moderate to heavy rain showers, six eighths of cloud cover base 800 feet and visibility reduced to 3000 metres. The forecast surface wind was 340 degrees at 20-30 knots. The pilot's qualifications required a minimum visibility of 5000 metres for operation at night in Visual Meteorological Conditions, (NGT VMC). It was planned that another pilot, qualified for Instrument Flight Rules (IFR) operations, would act as pilot in command, but he became unavailable. The flight plan submitted by the pilot indicated he would be operating under the IFR category and when queried on taxiing he confirmed that this was so. Shortly after DEPARTURE, the pilot requested a weather report from an IFR pilot who had just landed at King Island. This gave a cloud base of 2000 feet, heavy rain showers and visibility of 2000 metres. Flares had been laid to allow the other pilot to use Runway 35 because of the strong northerly wind. The pilot of VH-CAY activated the electric lighting for Runway 28. He reported that the weather was satisfactory enroute and he could see lights ahead on the island. On crossing the coast flight conditions became rough in moderate to severe turbulence. The pilot advised he arrived over the aerodrome at 1500 feet above mean sea level and observed the lighted wind sock was horizontal, with the direction fluctuating rapidly between north and west. He turned to the south and broadcast his intention to land on Runway 28. Neither the pilot nor the passenger had any further recall of the events leading to the accident. VH-CAY was heard passing over the aerodrome and the engine sound was very loud, suggesting to the listener that the aircraft was low. It had been raining continuously for more than an hour, sometimes very heavily, and it was still raining at the time. The aircraft was subsequently seen flying at a very low height some six kilometres south of the aerodrome, tracking approximately north. It was raining very heavily in that area and the wind was very strong. Soon afterwards there was a sound of impact and a flash of light. The aircraft had struck the tops of trees 30 feet high, then descended to the ground. After the aircraft came to rest it was destroyed by a fire. Both occupants were seriously injured.
Probable cause:
Examination of the wreckage was severely hampered by the extreme fire damage sustained, but no evidence was found of any defects that might have contributed to the accident. The aircraft had evidently been under control at the time it collided with the trees. A post analysis of the conditions by the Bureau of Meteorology indicated the possible presence of strong up and down drafts, horizontal wind shear, turbulence, and estimated visibility as 2-3000 metres in rain. The evidence suggested that the pilot may have been lower than he believed as the aircraft overflew the
aerodrome. Having passed overhead, there there would have been few external visual references under the existing conditions to alert him that the aircraft was inadvertently being descended into the ground.
Significant Factors:
The following factors were considered relevant to the development of the accident:
1. The pilot attempted to conduct an operation for which he was not qualified.
2. Severe weather conditions in the destination aerodrome area with strong winds, turbulence, heavy rain and poor visibility.
3. The pilot continued flight into adverse weather conditions.
4. The pilot may have misread his altimeter and been lower than intended.
5. The pilot may have unintentionally descended the aircraft into the ground in conditions of poor visibility.
Final Report: 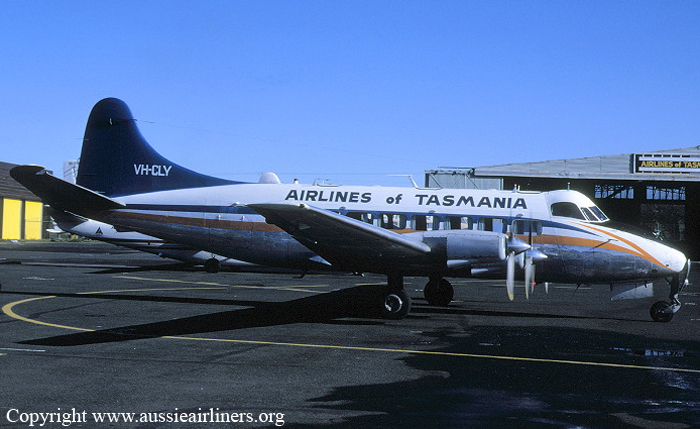 Crash of a Rockwell Shrike Commander 500S off Hobart

Crash of a Cessna 402B in Queenstown 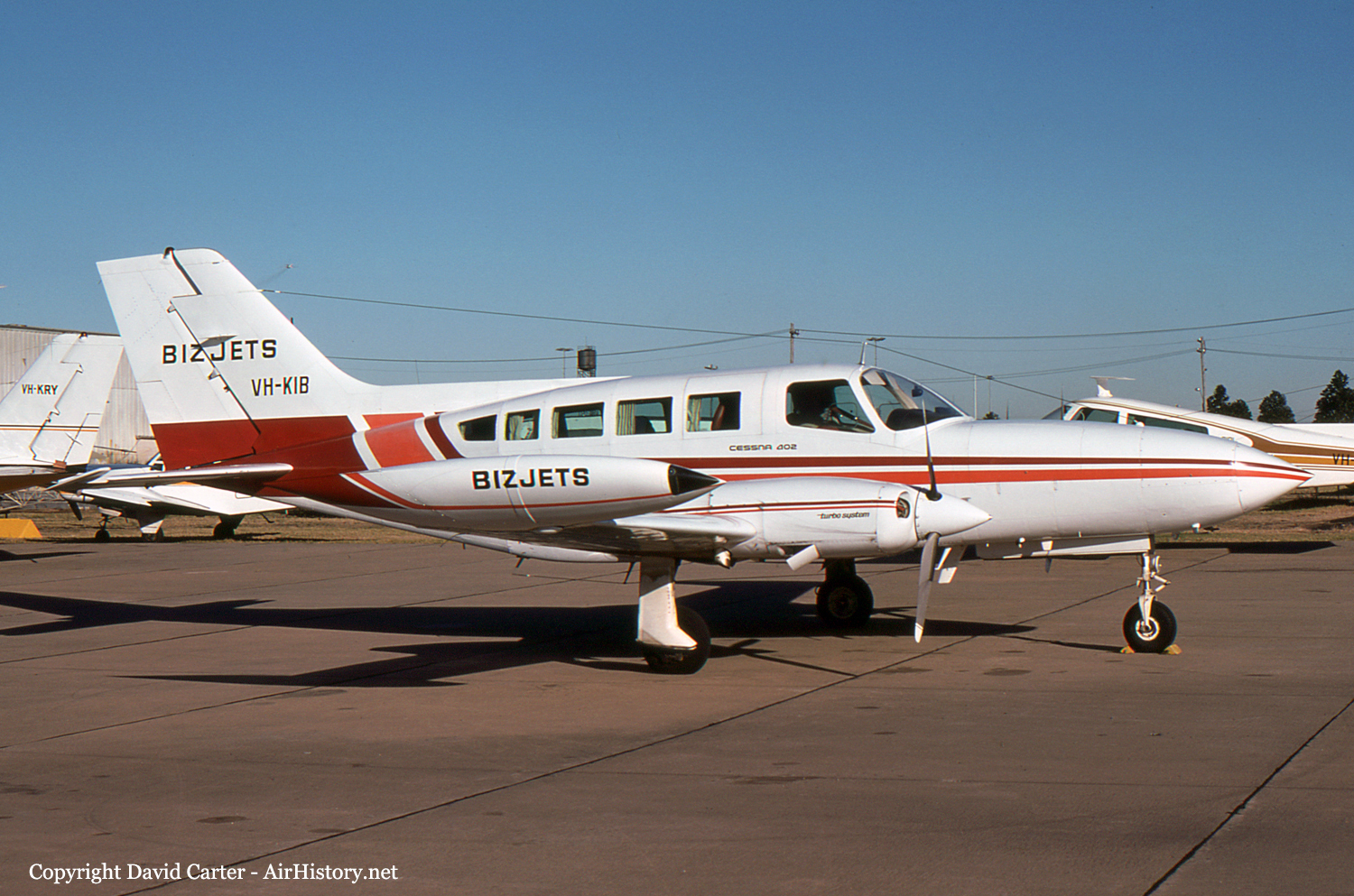 Type of aircraft:
De Havilland DHC-6 Twin Otter
Operator:
Pan-Air
Registration:
VH-PAQ
Flight Phase:
Flight
Flight Type:
Cargo
Survivors:
Yes
Site:
Plain, Valley
Schedule:
King Island - Wynyard
MSN:
227
YOM:
1969
Location:
Yarra Creek (King Island)
Tasmania
Country:
Australia
Region:
Oceania
Crew on board:
1
Crew fatalities:
Pax on board:
0
Pax fatalities:
Other fatalities:
Total fatalities:
0
Circumstances:
The airplane departed King Island-Currie Airport on a cargo flight to Wynyard-Burnie Airport, carrying one pilot and a load of meat. Weather conditions worsened and the pilot was unable to locate the destination airport so he decided to divert to Devonport Airfield. Unfortunately, the visibility was too low and he eventually decided to return to King Island. While approaching the coast, both engines failed due to fuel exhaustion. The pilot attempted an emergency landing when the airplane crashed in a prairie located in Yarra Creek, on the east coast of the island. The pilot was injured and the aircraft was destroyed.
Probable cause:
Double engine failure in flight due to fuel exhaustion. 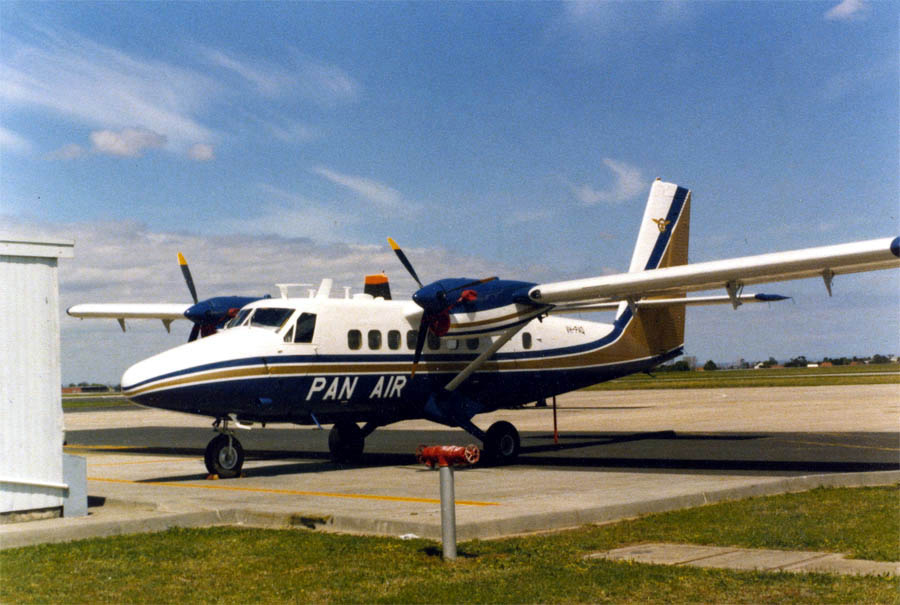