Type of aircraft:
Let L-410
Operator:
Sky Executive Aviation Services
Registration:
9Q-CGX
Flight Phase:
Landing (descent or approach)
Flight Type:
Ferry
Survivors:
No
Site:
Plain, Valley
Schedule:
Abuja – Port Harcourt – Calabar
MSN:
85 14 02
YOM:
1985
Flight number:
SXC401
Location:
Calabar
Cross River
Country:
Nigeria
Region:
Africa
Crew on board:
5
Crew fatalities:
Pax on board:
0
Pax fatalities:
Other fatalities:
Total fatalities:
5
Aircraft flight hours:
8086
Circumstances:
On the day of the accident, the aircraft departed Abuja with the call Sign SXC401 en route Port Harcourt conveying 2 passengers on revenue basis. Before the commencement of the flight, the Chief Engineer was reported to have replaced the "Carbon brush" of the starboard starter generator. The source of this pair of carbon brushes is questionable. This flight was uneventful as the passengers disembarked and the aircraft picked up fuel for Port Harcourt. The aircraft departed Port Harcourt at 1750 hrs UTC with five souls on board (all crewmembers), estimating Calabar at 1827 hrs UTC. At 1800 hrs UTC, the aircraft was in contact with Calabar Tower at 5,000 feet, reporting 5 Souls-On-Board and an endurance of 3 hrs 30 minutes. The crew also requested for the hourly weather report and the control tower passed the 1700 hours weather report as "surface wind 140°/ 09 knots, visibility 10km, slight thunderstorm, cloud base scattered 300 metres, few CB N-SE 690 m broken at 9,000 m, QNH 1008 and temperature 27°C". The aircraft was also instructed to maintain the 5,000 feet level and to expect no delay for the VOR approach to runway 03. At 1809 hrs UTC, the aircraft was at 35 nautical miles to the station when the pilot requested for descent clearance and the controller gave him a clearance to 2,500 feet and to position for a straight-in approach to runway 03 and the crew acknowledged. At 1824 hrs UTC, the pilot reported having electrical problem and therefore declared emergency. Thereafter, the pilot requested for increase in the intensity of the approach lights, the controller informed him that the approach lights were, already, at their maximum intensity. The controller procedurally then requested for the aircraft's altitude but the response of the pilot was "we are coming to Calabar" and at 1830 hrs the aircraft reported 16 nautical miles to Calabar. The control tower at 1833 hrs UTC, wanted to establish the position of the aircraft by requesting repeatedly "Your position? Your position?" to which the response was "standby, standby". The verbal query continued until 1842 hrs and when there was no response from the aircraft, the controller alerted the airport fire services to be on the standby for further instructions. When the controller could no longer establish contact with the aircraft, he then contacted the relevant agencies for search and rescue operations. Meanwhile, the aircraft on descent impacted trees and crashed in a marshy area located 22 km from the airport. The aircraft was destroyed and all five occupants were killed.
Probable cause:
The probable cause of the accident was the premature departure of the aeroplane from the normal Minimum Safe Altitude of 2,500 feet without ATC clearance until it flew into the terrain. The contributory factor was the emergence of electrical problem on the aircraft on the commencement of its approach. The problem might have distracted the attention of the pilots from having undistorted focus on the instruments. Another contributory factor was the unfavourable weather conditions of low cloud base and thunderstorm, which impaired the visibility at the critical time of the descent.
Final Report: 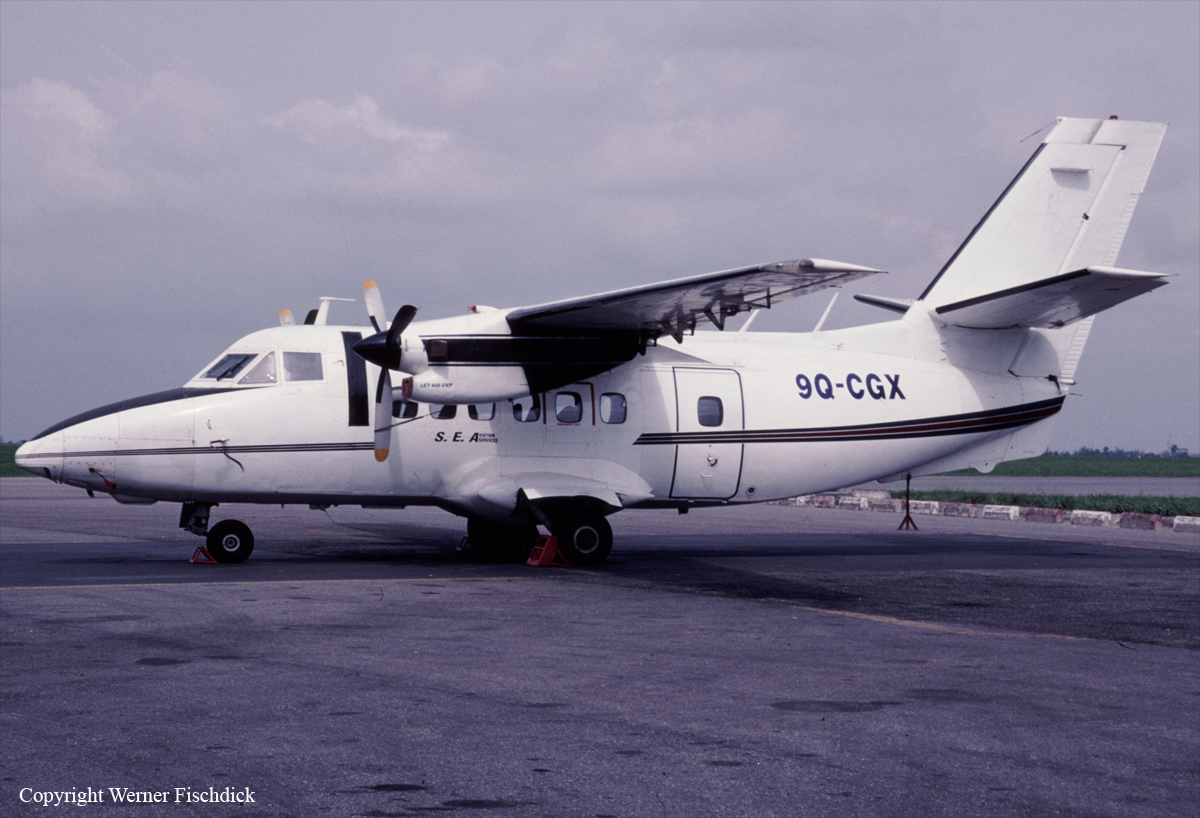 Registration:
5N-BAA
Flight Phase:
Landing (descent or approach)
Flight Type:
Scheduled Revenue Flight
Survivors:
Yes
Site:
Airport (less than 10 km from airport)
Schedule:
Lagos - Calabar
MSN:
041
YOM:
1965
Location:
Calabar
Cross River
Country:
Nigeria
Region:
Africa
Crew on board:
6
Crew fatalities:
Pax on board:
49
Pax fatalities:
Other fatalities:
Total fatalities:
1
Circumstances:
The approach to Calabar Airport runway 03 was completed in poor weather conditions with heavy rain falls, turbulences, clouds down to 240 metres and a visibility limited to 2,800 metres. On final, the aircraft was unstable and not properly aligned with the runway centerline. Upon touchdown, the left main gear landed on the grassy area to the left of the runway. The captain attempted to correct when the aircraft veered to the right back onto the runway and overran. It struck a ditch and came to rest 1,500 metres further, bursting into flames. A crew member was killed and 10 other occupants were injured.
Probable cause:
The following findings were reported:
- Poor weather conditions,
- Limited visibility and low ceiling,
- The aircraft was unstable on final approach and misaligned on runway 03,
- The aircraft landed at an excessive speed,
- The crew failed to initiate a go-around procedure,
- Poor planned approach. 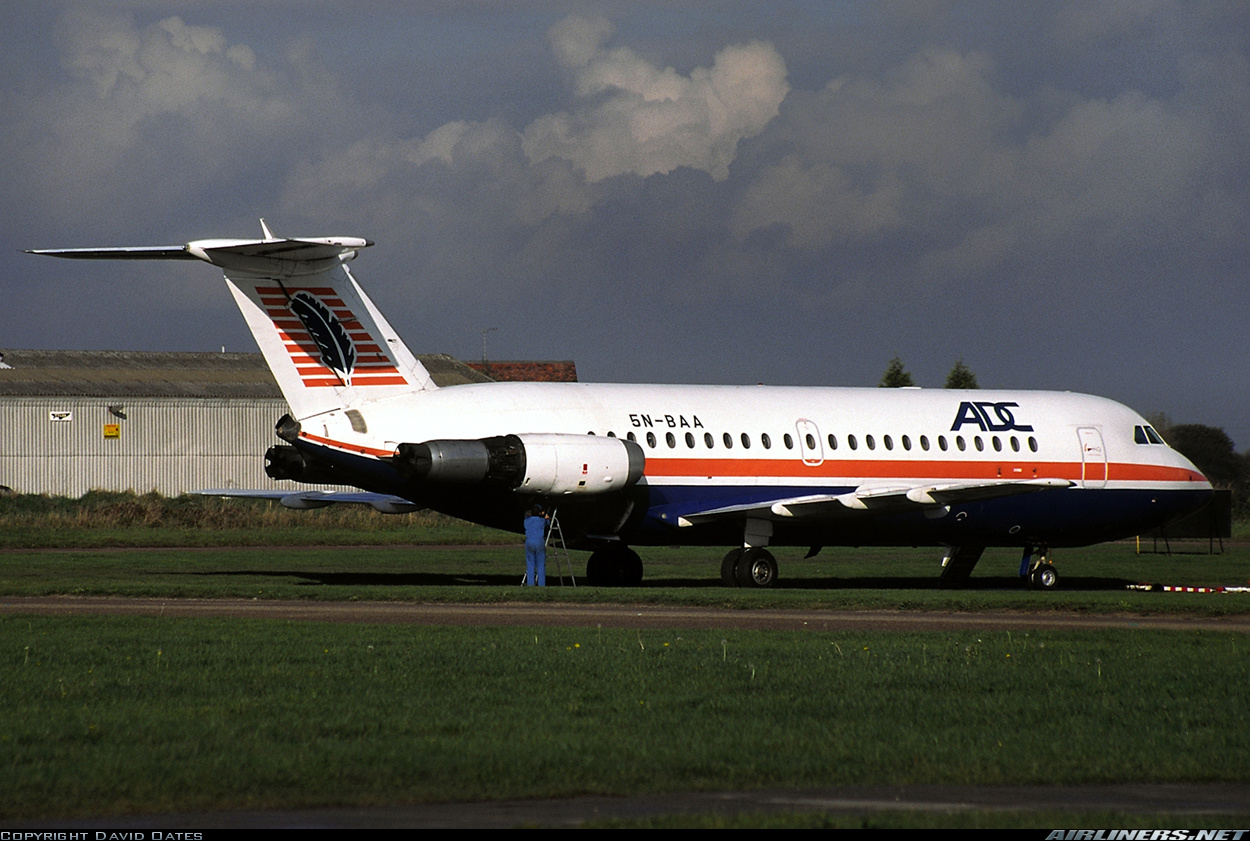 Crash of a Sud-Aviation SE-210 Caravelle III in Calabar 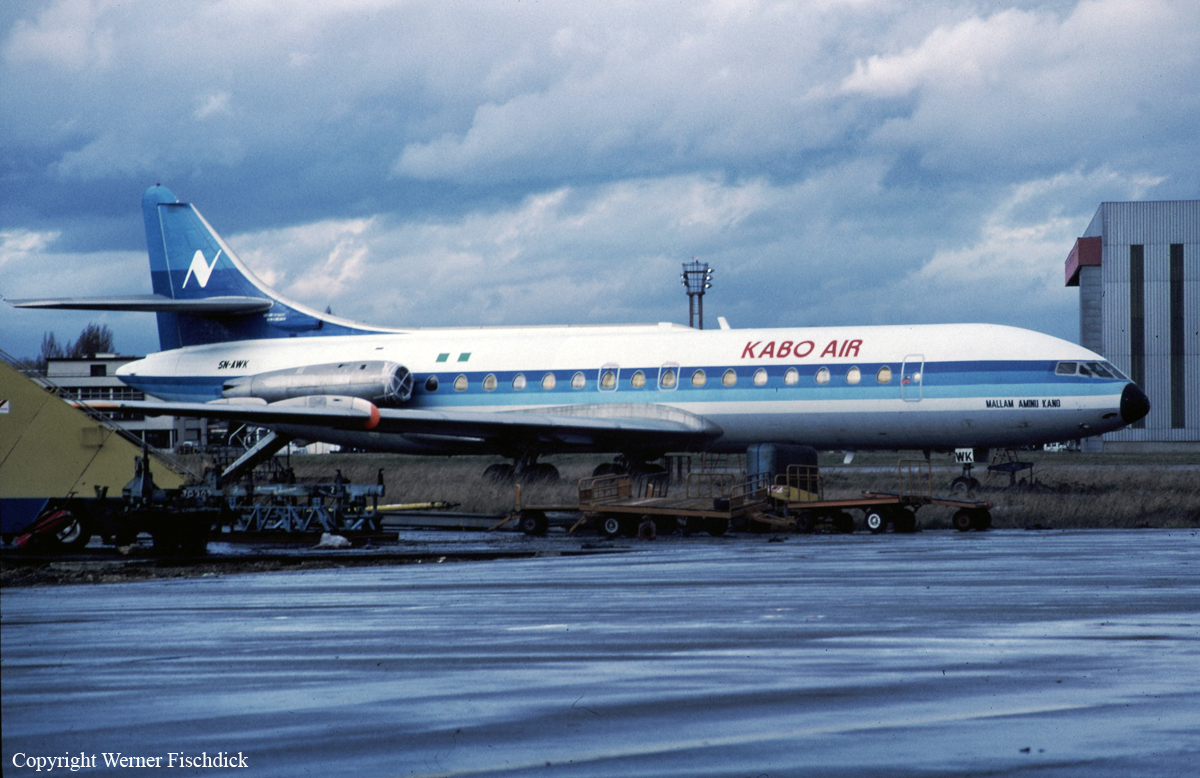 Registration:
5N-ANF
Flight Phase:
Landing (descent or approach)
Flight Type:
Scheduled Revenue Flight
Survivors:
Yes
Site:
Airport (less than 10 km from airport)
Schedule:
Calabar - Enugu
MSN:
11090
YOM:
1975
Location:
Enugu
Enugu
Country:
Nigeria
Region:
Africa
Crew on board:
6
Crew fatalities:
Pax on board:
66
Pax fatalities:
Other fatalities:
Total fatalities:
53
Aircraft flight hours:
10618
Aircraft flight cycles:
14149
Circumstances:
On final approach to Enugu Airport, the visibility was below minimums due to thick fog. The crew decided to continue the approach and descended below the MDA and below the glide until the airplane struck the ground in a relative flat attitude. Upon impact, the undercarriage were torn off and the aircraft slid on its belly for few dozen meters before coming to rest in flames about 3,3 km short of runway threshold. 53 people were killed while 19 others were seriously injured. The aircraft was destroyed.
Probable cause:
The decision of the crew to continue the approach in below-minima weather conditions until the aircraft impacted the ground. It was reported that the ILS system was unserviceable at the time of the accident. 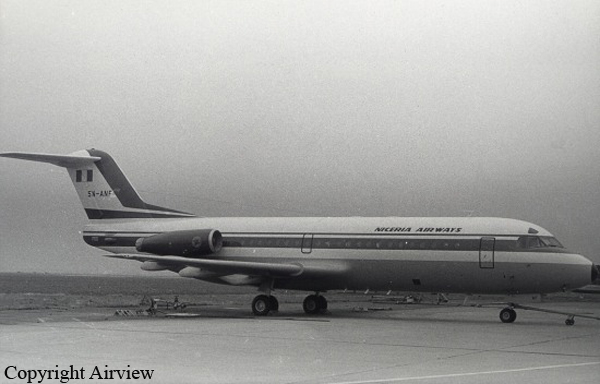 Crash of a Bristol 170 Freighter 21E near Calabar: 13 killed

Registration:
VR-NAD
Flight Phase:
Flight
Flight Type:
Scheduled Revenue Flight
Survivors:
No
Site:
Plain, Valley
Schedule:
Enugu – Calabar
MSN:
12779
YOM:
1946
Location:
Calabar
Cross River
Country:
Nigeria
Region:
Africa
Crew on board:
3
Crew fatalities:
Pax on board:
10
Pax fatalities:
Other fatalities:
Total fatalities:
13
Circumstances:
While cruising at an altitude of 4,000 feet, the airplane went out of control and crashed in a dense wooded and uninhabited area located about 84 km northwest of Calabar. The aircraft was totally destroyed and all 13 occupants were killed.
Probable cause:
Loss of control in flight following a structural failure of the left wing.

Crash of a Sikorsky S-38B in Calabar