Crash of a Gulfstream 690C Jetprop 840 off Myrtle Beach

Type of aircraft:
Rockwell Gulfstream 690C Jetprop 840
Operator:
C&C Flying
Registration:
N840JC
Flight Phase:
Landing (descent or approach)
Flight Type:
Positioning
Survivors:
Yes
Site:
Lake, Sea, Ocean, River
Schedule:
Greater Cumberland - Myrtle Beach
MSN:
690-11676
YOM:
1981
Location:
Myrtle Beach
South Carolina
Country:
United States of America
Region:
North America
Crew on board:
1
Crew fatalities:
Pax on board:
0
Pax fatalities:
Other fatalities:
Total fatalities:
0
Circumstances:
The airplane sustained substantial damage when it collided with terrain during an approach to landing at the Myrtle Beach International Airport (MYR), Myrtle Beach, South Carolina. The commercial pilot was seriously injured. The airplane was privately owned and operated under the provisions of Title 14 Code of Federal Regulations Part 91 as a personal flight. Instrument meteorological conditions prevailed, and an instrument flight rules flight plan was filed for the flight that departed Greater Cumberland Regional Airport (CBE), Cumberland, Maryland. According to the pilot, he was following radar vectors for the downwind leg of the traffic pattern to runway 36 at MYR. He turned for final approach and was inside the outer marker, when he encountered heavy turbulence. As he continued the approach, he described what he believed to be a microburst and the airplane started to descend rapidly. The pilot added full power in an attempt to climb, but the airplane continued to descend until it collided with the Atlantic Ocean 1 mile from the approach end of runway 36. A review of pictures of the wreckage provided by a Federal Aviation Administration inspector revealed the cockpit section of the airplane was broken away from the fuselage during the impact sequence. At 1456, the weather recorded at MYR, included broken clouds at 6,000 ft, few clouds at 3,500 ft and wind from 010° at 8 knots. The temperature was 14°C, and the dew point was 9°C. The altimeter setting was 30.27 inches of mercury. The airplane was retained for further examination. 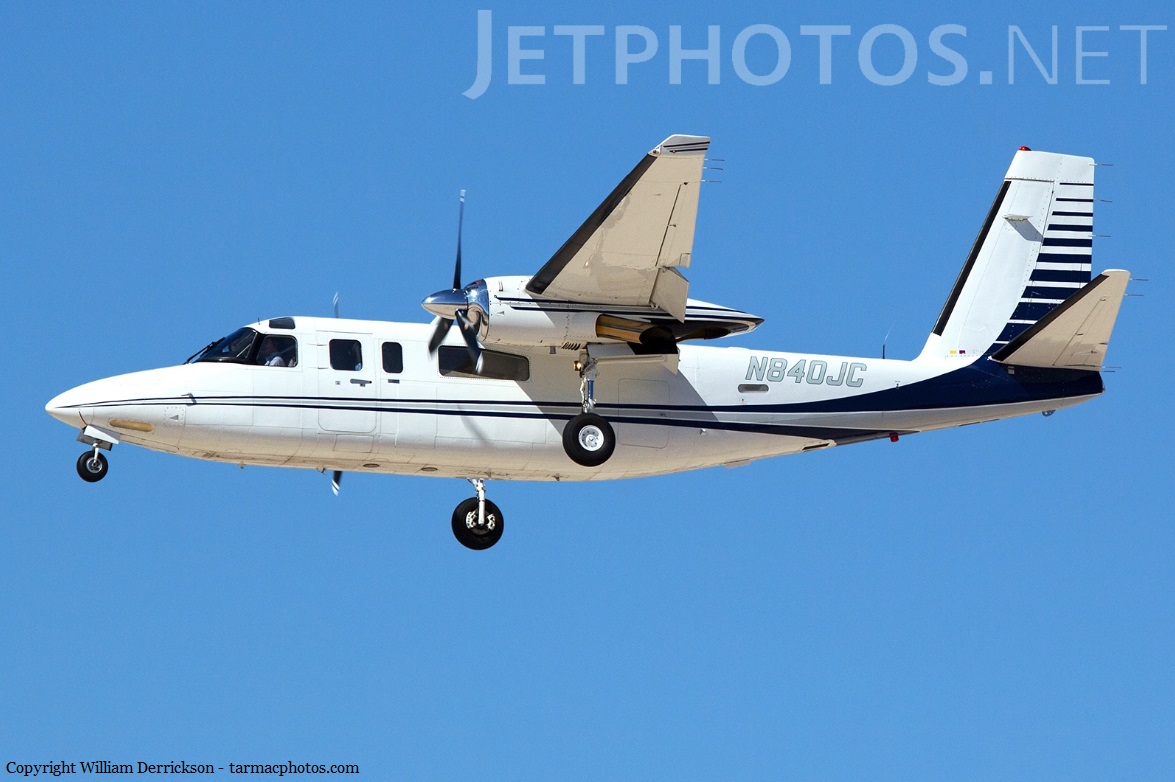 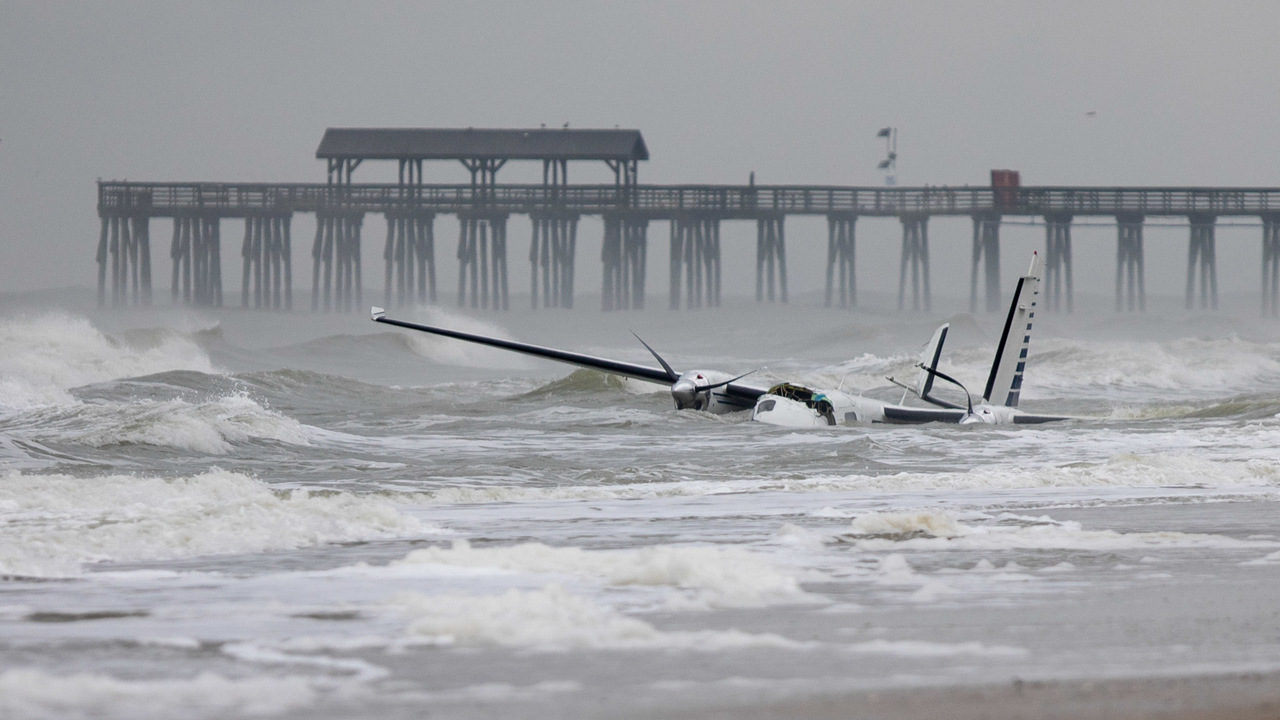 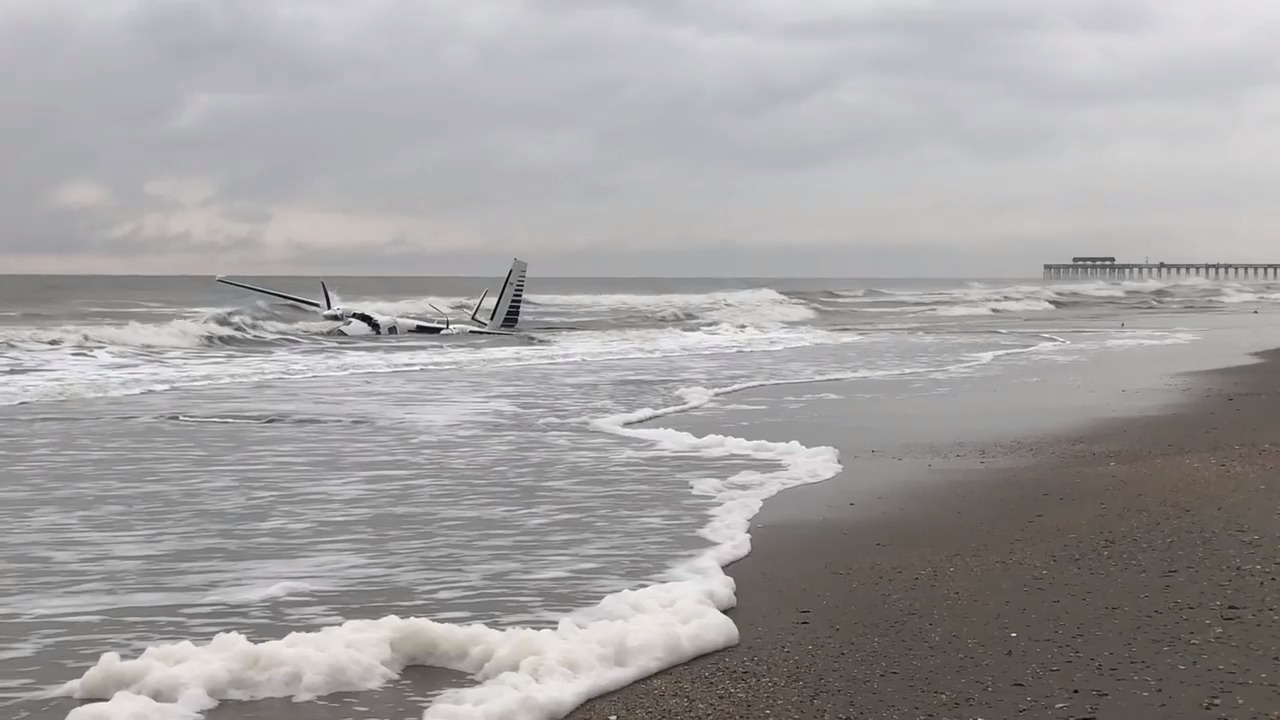 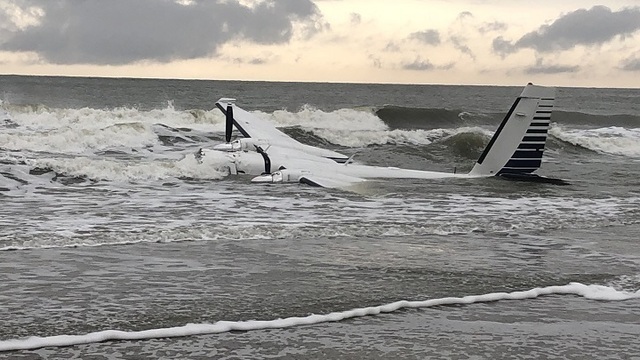 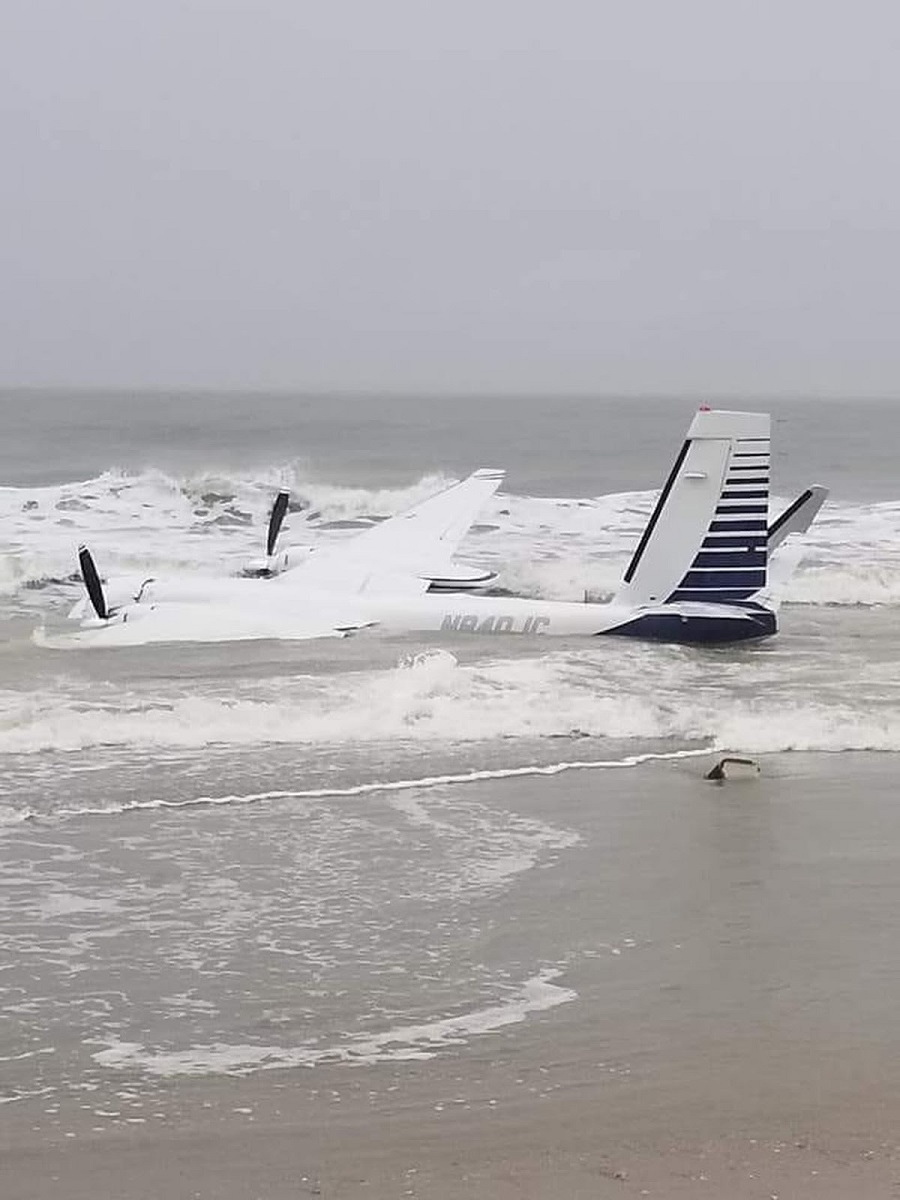 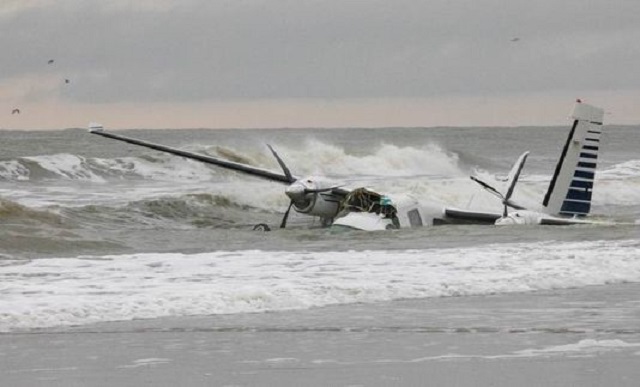 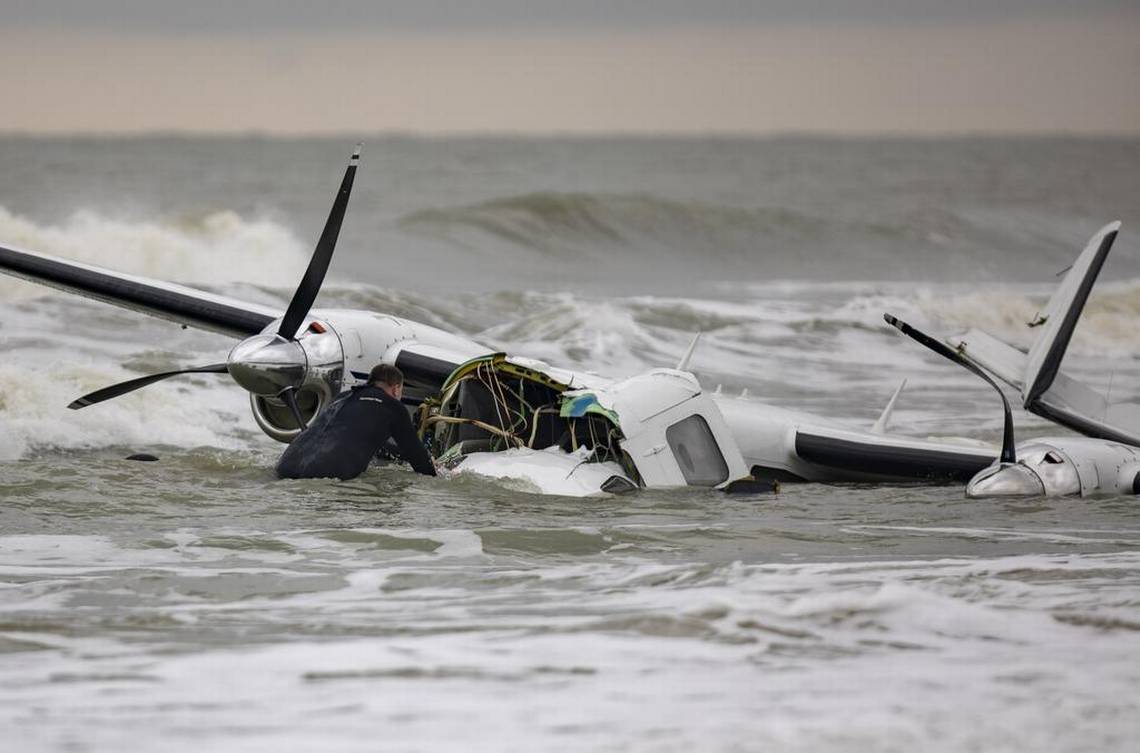 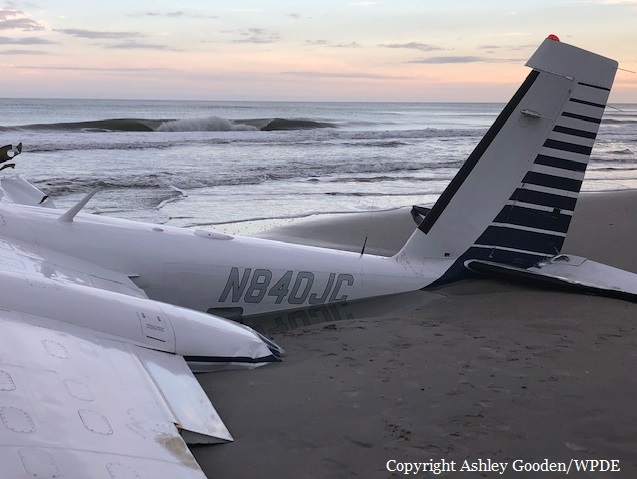 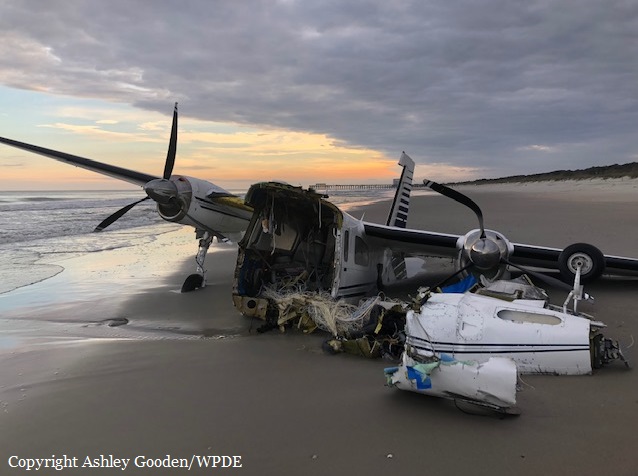 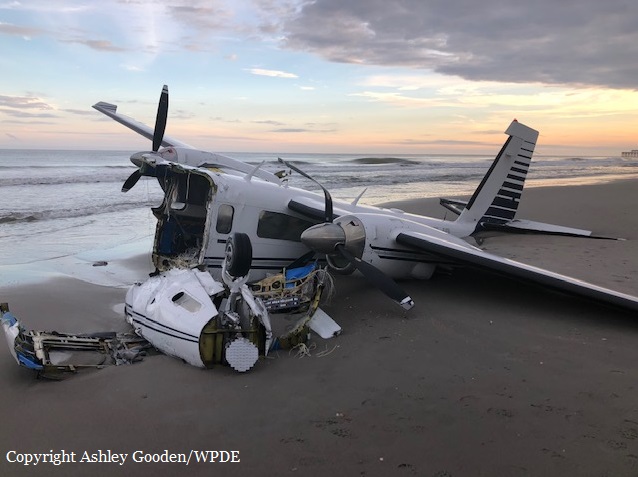 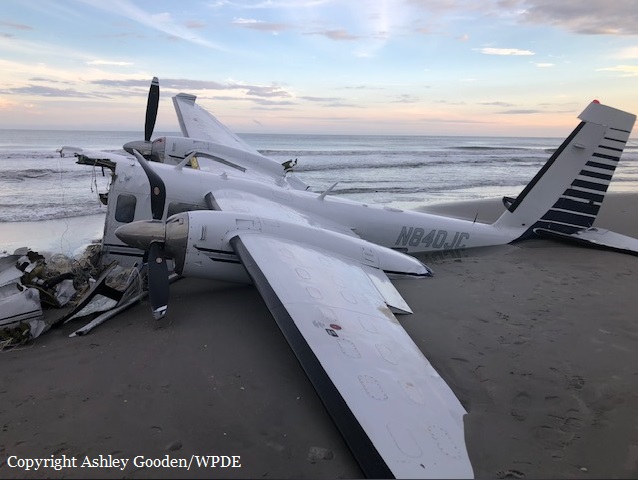 Crash of a Rockwell 690C Jetprop 840 off Los Roques 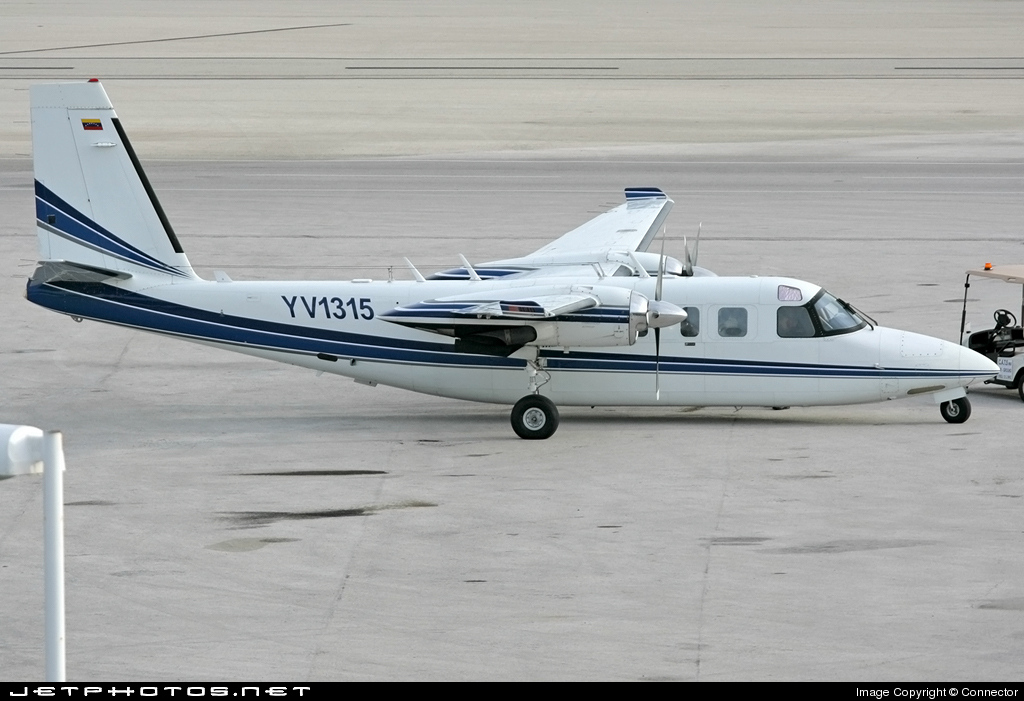 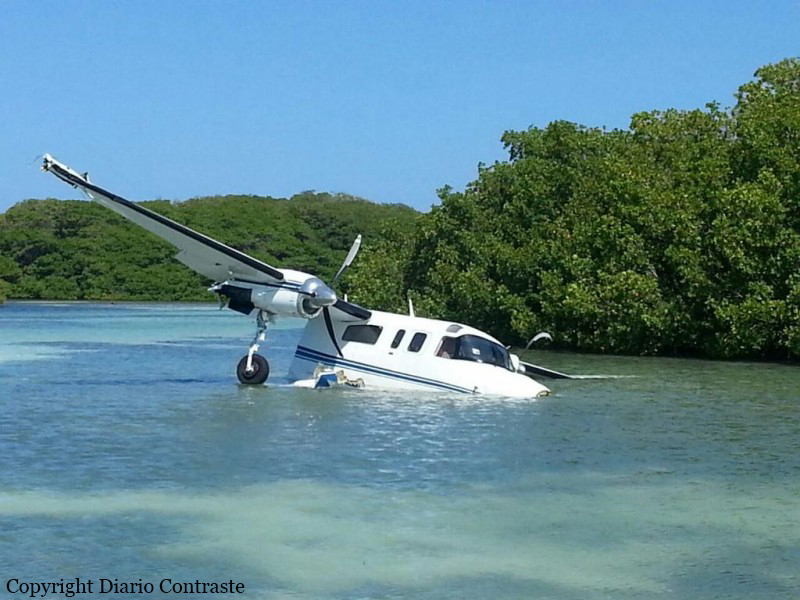 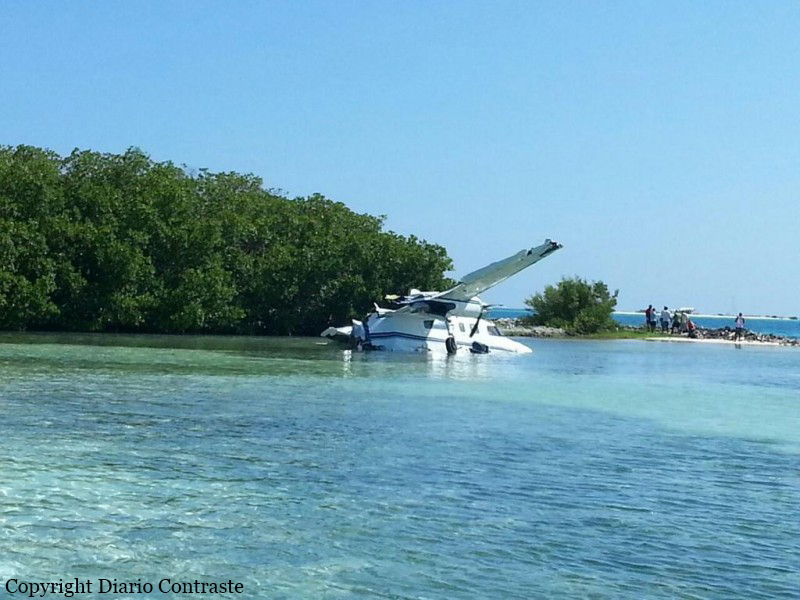 Crash of a Rockwell Gulfstream Jetprop 840 in Bellevue: 4 killed

Type of aircraft:
Rockwell Gulfstream 690C Jetprop 840
Operator:
Mid Kansas Agri Company
Registration:
N840V
Flight Phase:
Landing (descent or approach)
Flight Type:
Executive/Corporate
Survivors:
No
Site:
Plain, Valley
Schedule:
Great Bend – Nashville
MSN:
690-11727
YOM:
1982
Location:
Bellevue
Tennessee
Country:
United States of America
Region:
North America
Crew on board:
1
Crew fatalities:
Pax on board:
3
Pax fatalities:
Other fatalities:
Total fatalities:
4
Captain / Total flying hours:
3205
Captain / Total hours on type:
719.00
Aircraft flight hours:
4460
Circumstances:
The instrument-rated private pilot was conducting a personal cross-country flight in the multiengine airplane under instrument flight rules (IFR). As the flight neared its destination, the controller issued clearance for a GPS approach, and, shortly thereafter, the pilot informed the controller that he needed to review the approach procedure before continuing the approach. The controller acknowledged, and, after the pilot reported that he was ready to proceed with the approach, the controller again issued clearance for the GPS approach. Radar data showed that, during the approach, the airplane tracked a course that was offset about 0.5 miles right of the final approach course until it was about 1 mile from the runway threshold. The airplane then turned left towards the threshold and descended to an altitude of about 145 ft above ground level over the runway threshold before the pilot performed a missed approach. It is likely that the pilot performed the missed approach because he was unable to align the airplane with the runway before it crossed the threshold. The controller provided radar vectors for the airplane to return to the approach course and cleared the airplane a third time for the GPS approach to the runway. Radar data showed that the airplane was established on the final approach course as it passed the initial approach fix; however, before it reached the final approach fix, its airspeed slowed to about 111 knots, and it began a left turn with a 25 degree bank angle. About 18 seconds later, while still in the turn, the airplane slowed to 108 knots and began descending rapidly. The airplane's rate of descent exceeded 10,000 feet per minute, and it impacted the ground about 9 miles from the destination airport. Examination of the accident site showed that the airplane was severely fragmented and fire damaged with debris scattered for about 450 feet. Postaccident examination of the wreckage did not reveal evidence of any preimpact failures; however, damage to the left engine indicated that it was not producing power at the time of the accident. The severity of impact and fire damage to the airplane and engine precluded determination of the reason for the loss of left engine power. Weather conditions present at the time of the accident were conducive to super cooled liquid water droplets, and the airplane likely encountered moderate or greater icing conditions. Several pilot reports (PIREPs) for moderate, light, trace, and negative icing were reported to air traffic control but were not distributed publicly into the national airspace system, and there was no airmen's meteorological information (AIRMET) issued for icing. However, the pilot received standard and abbreviated weather briefings for the flight, and his most recent weather briefing included three PIREPs for icing conditions in the area of the accident site. Given the weather information provided, the pilot should have known icing conditions were possible. Even so, the public distribution of additional PIREPs would have likely increased the weather situational awareness by the pilot, weather forecasters, and air traffic controllers. The airplane was equipped with deicing and anti-icing systems that included wing and empennage deice boots and engine inlet heaters. Due to impact damage to the cockpit, the positions of the switches for the ice protection systems at the time of the accident could not be determined. Although the airplane's airspeed of 108 knots when the steep descent began was above its published stall speed of 77 knots, both bank angle and ice accretion would have increased the stall speed. In addition, the published minimum control airspeed was 93 knots. It is likely that, after the airplane passed the initial approach fix, the left engine lost power, the airplane's airspeed began to decay, and the asymmetric thrust resulted in a left turn. As the airspeed continued to decay, it decreased below either stall speed or minimum control airspeed, and the airplane entered an uncontrolled descent.

Probable cause:
The pilot's failure to maintain airspeed with one engine inoperative, which resulted in a loss of control while on approach. Contributing to the accident were airframe ice accumulation due to conditions conducive to icing and the loss of engine power on one engine for reasons that could not be determined due to the extent of damage to the airplane.
Final Report: 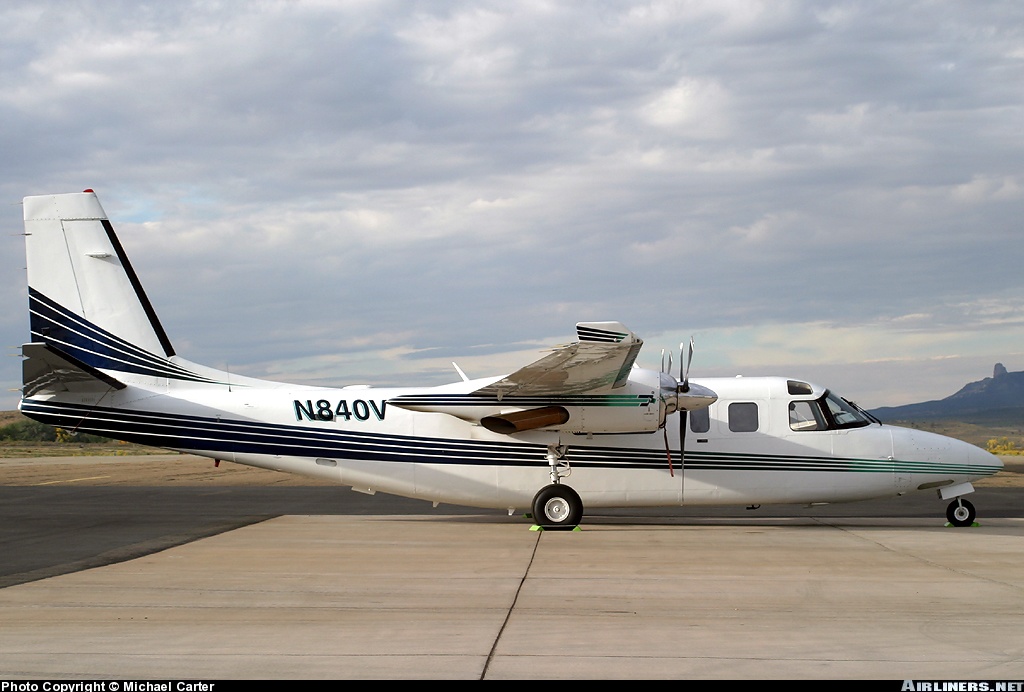 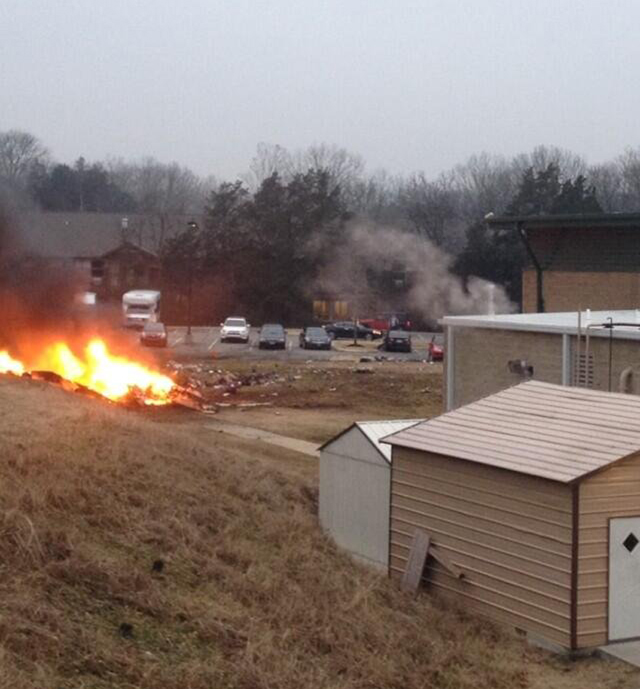 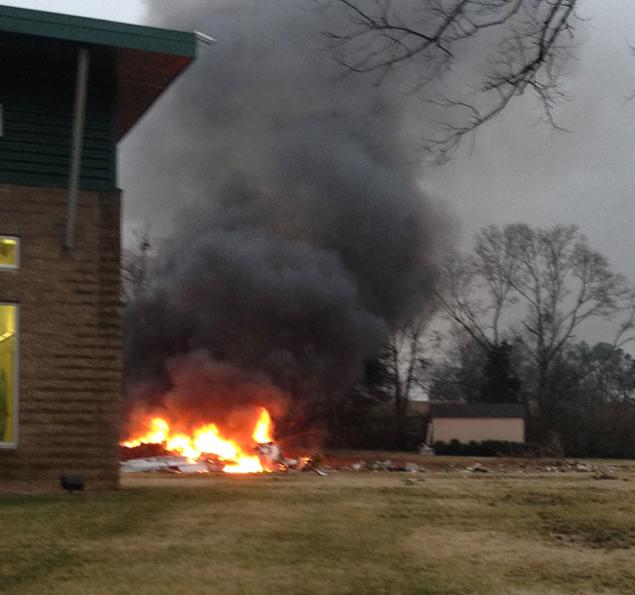 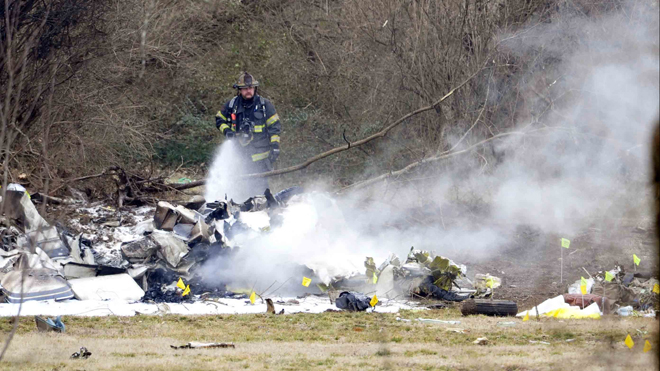 Crash of a Rockwell Gulfstream 690C Jetprop 840 in Wray: 3 killed

Registration:
N840NK
Flight Phase:
Landing (descent or approach)
Flight Type:
Executive/Corporate
Survivors:
No
Site:
Airport (less than 10 km from airport)
Schedule:
Denver - Wray
MSN:
690-11734
YOM:
1978
Location:
Wray
Colorado
Country:
United States of America
Region:
North America
Crew on board:
2
Crew fatalities:
Pax on board:
1
Pax fatalities:
Other fatalities:
Total fatalities:
3
Captain / Total flying hours:
10221
Aircraft flight hours:
7215
Circumstances:
The airplane, a Rockwell Grand Commander 690C Jetprop 840, was "cleared for the approach" and approximately eight minutes later was observed emerging from the clouds, flying from west to east. Witnesses reported that the nose of the airplane dropped and the airplane subsequently impacted terrain in a near vertical attitude. Impact forces and a post impact fire destroyed the airplane. Examination of the airplane's systems revealed no anomalies. Weather at the time of the accident was depicted as overcast with three to six miles visibility. An icing probability chart depicted the probability for icing during the airplane's descent as 76 percent. AIRMETS for moderate icing and instrument meteorological conditions had been issued for the airplane’s route of flight. Another airplane in the vicinity reported light to moderate mixed icing. It could not be confirmed what information the pilot had obtained in a weather briefing, as a briefing was not obtained through a recorded source. A weight and balance calculation revealed that the accident airplane was 1,000 pounds over gross weight at the time of departure and 560 pounds over gross weight at the time of the accident. It was estimated that the center of gravity was at or just forward of design limitations.
Probable cause:
The pilot’s failure to maintain aircraft control during the approach resulting in an aerodynamic stall and subsequent impact with terrain. Contributing to the accident was the pilot’s improper preflight planning and conditions conducive for structural icing.
Final Report: 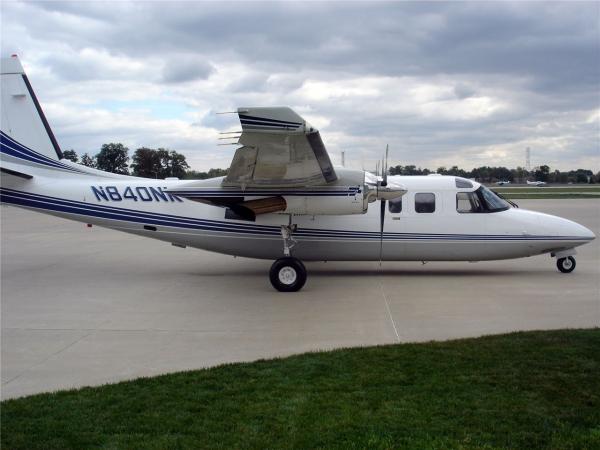 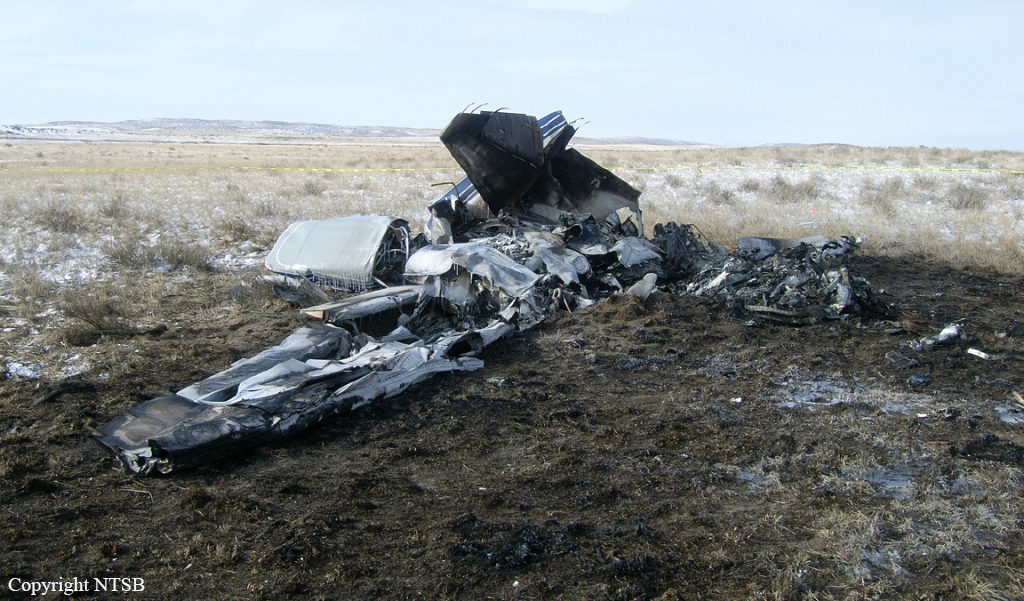 Crash of a Rockwell Gulfstream Jetprop 840 in Aguascalientes: 7 killed 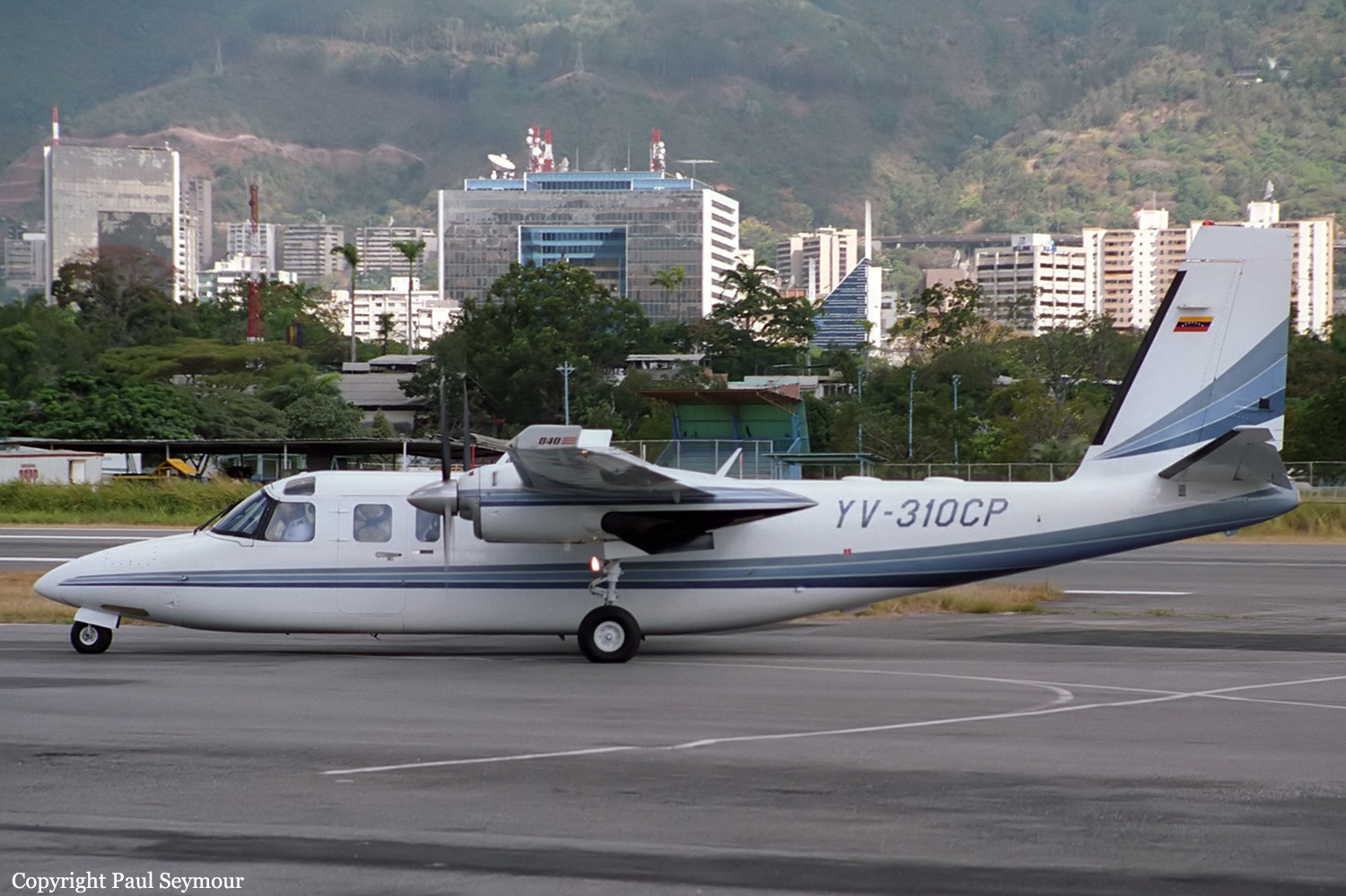