Crash of an Antonov AN-72 near Okoto: 8 killed

Registration:
A-72903
Flight Phase:
Flight
Flight Type:
Military
Survivors:
No
Site:
Plain, Valley
Schedule:
Goma - Kinshasa
MSN:
36572020385
YOM:
1987
Location:
Okoto
Kasai-Oriental
Country:
Democratic Republic of Congo
Region:
Africa
Crew on board:
4
Crew fatalities:
Pax on board:
4
Pax fatalities:
Other fatalities:
Total fatalities:
8
Circumstances:
The airplane departed Goma Airport at 1532LT on a cargo flight to Kinshasa, carrying four crew members, four passengers and various goods for the Congolese Presidency. The last contact with the flight was 59 minutes after takeoff from Goma Airport then the airplane disappeared without any distress call from the crew. The wreckage was localised on October 14 near the village of Okoto, Kole region, in the west part of the Kasai-Oriental Province. The aircraft was destroyed and all eight occupants were killed, among them two bodyguards and one of the personal driver of the Congolese President Félix Tshisekedi who returned from Goma to Kinshasa the same day in another aircraft. The Congolese Presidency confirmed that Félix Tshisekedi spent four days in Goma and that his personal Jeep was on board the AN-72. 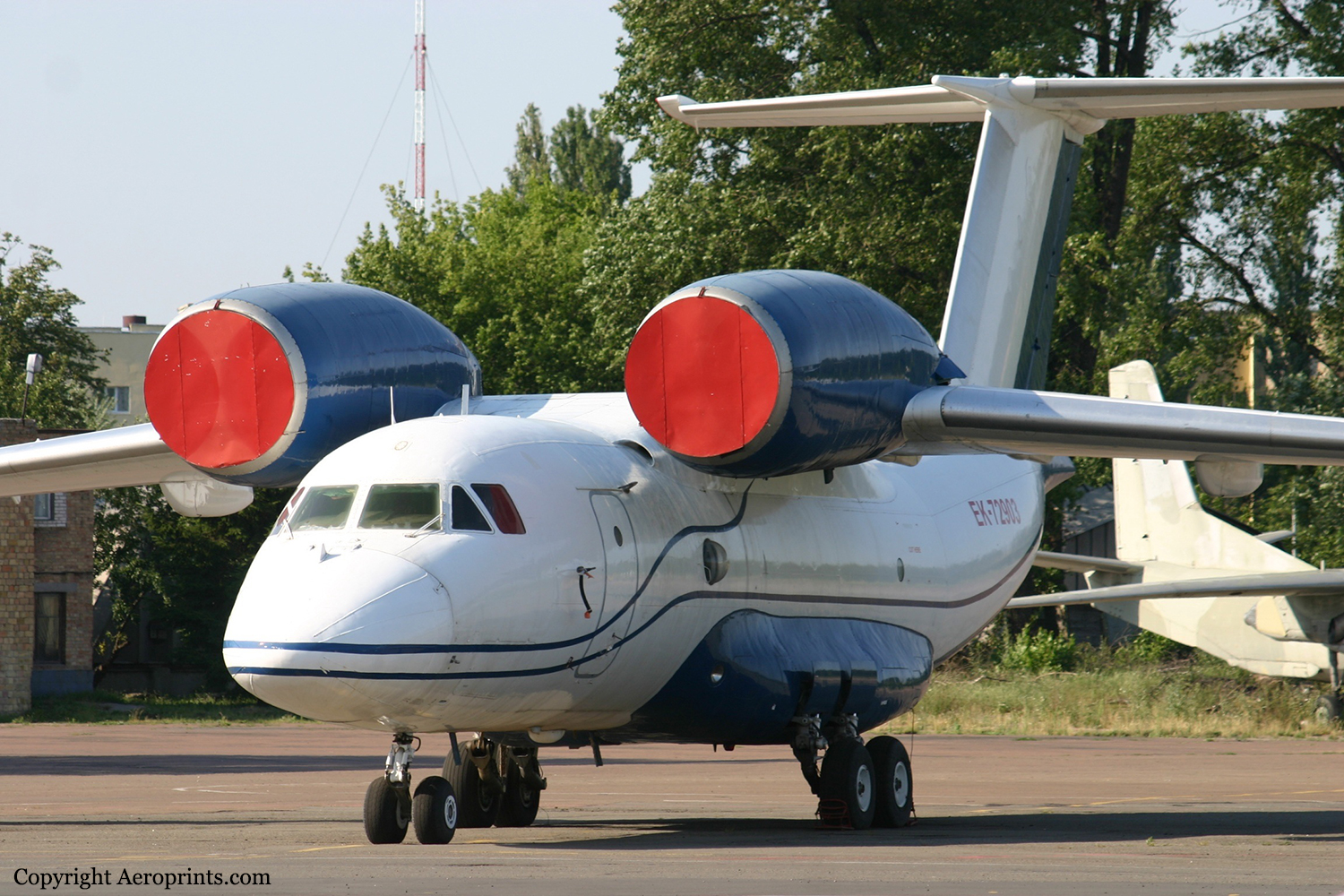 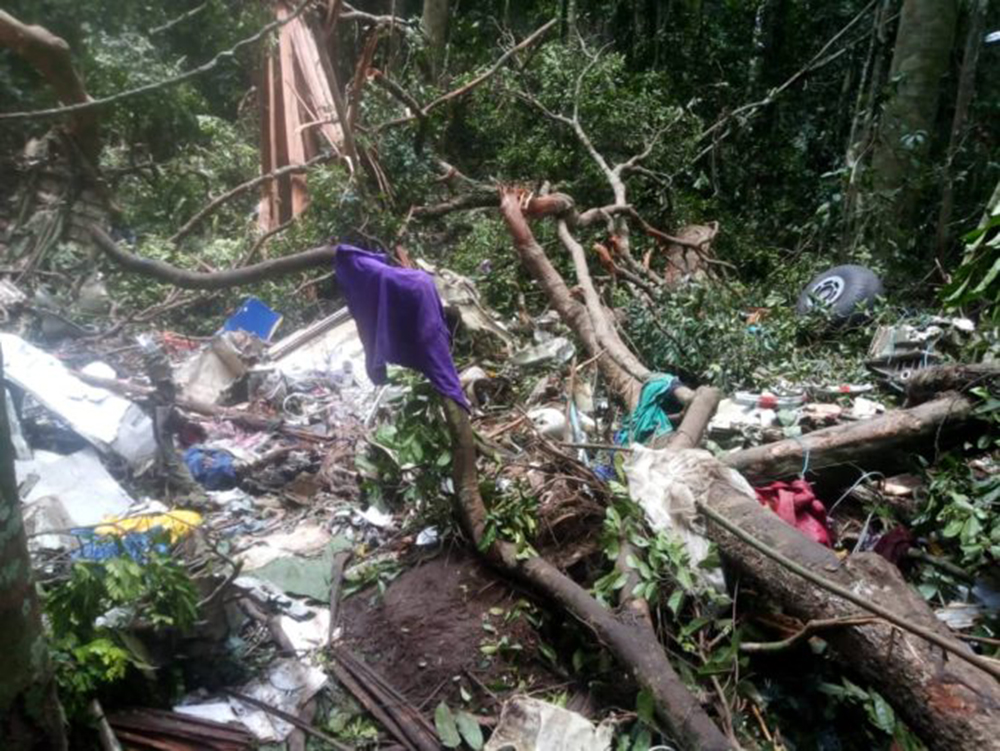 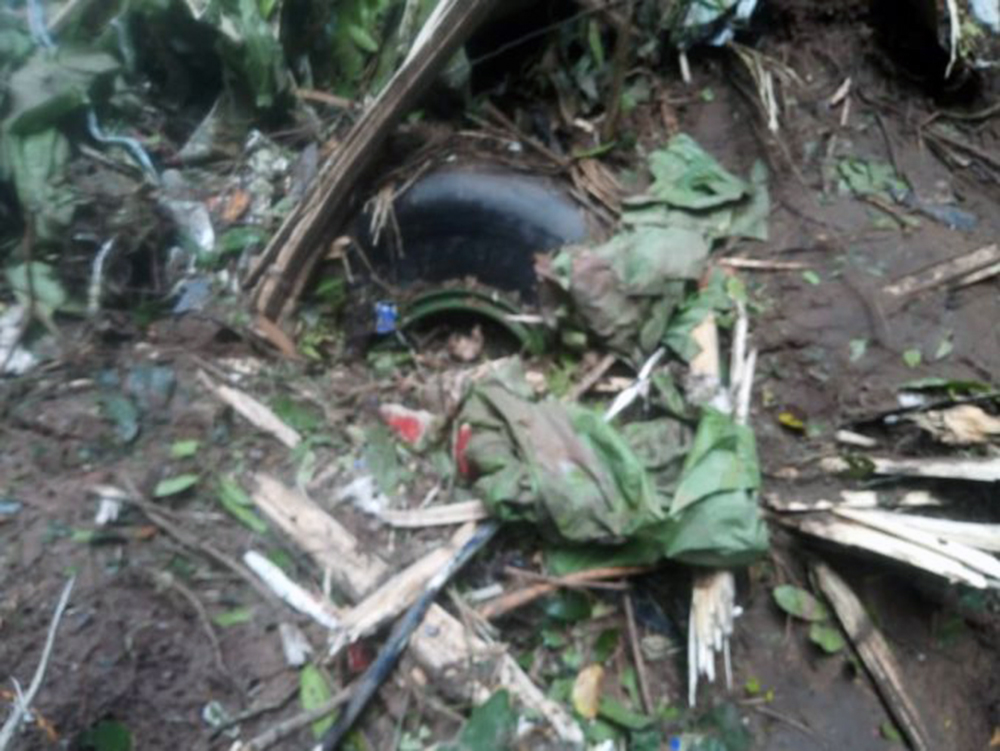 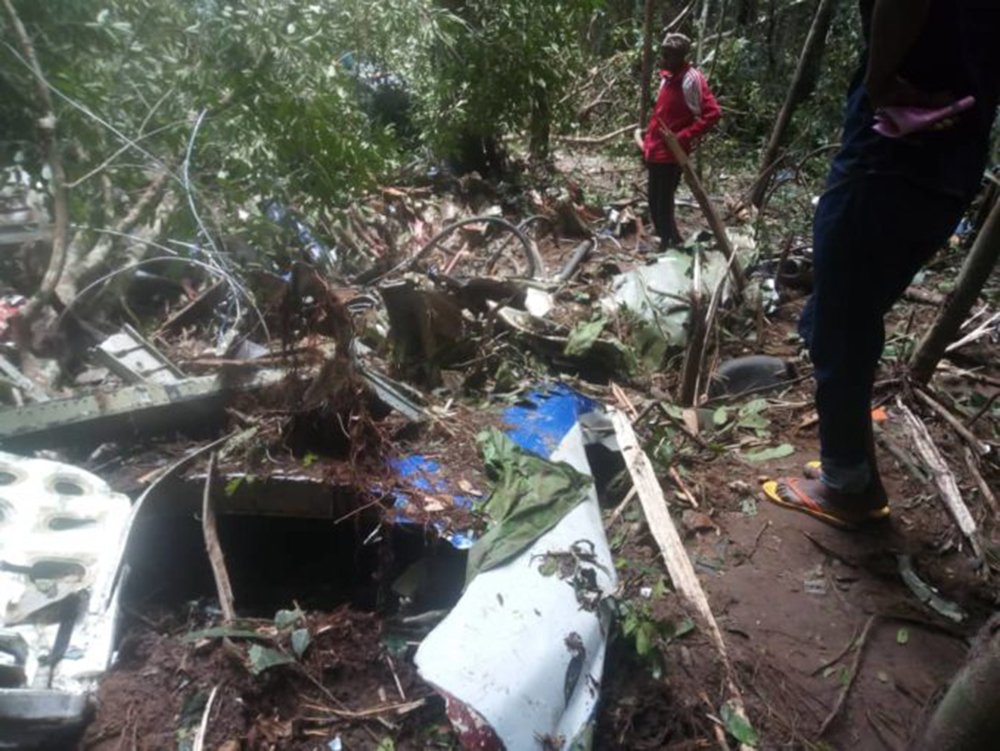 Crash of an Antonov AN-72P off Kribi 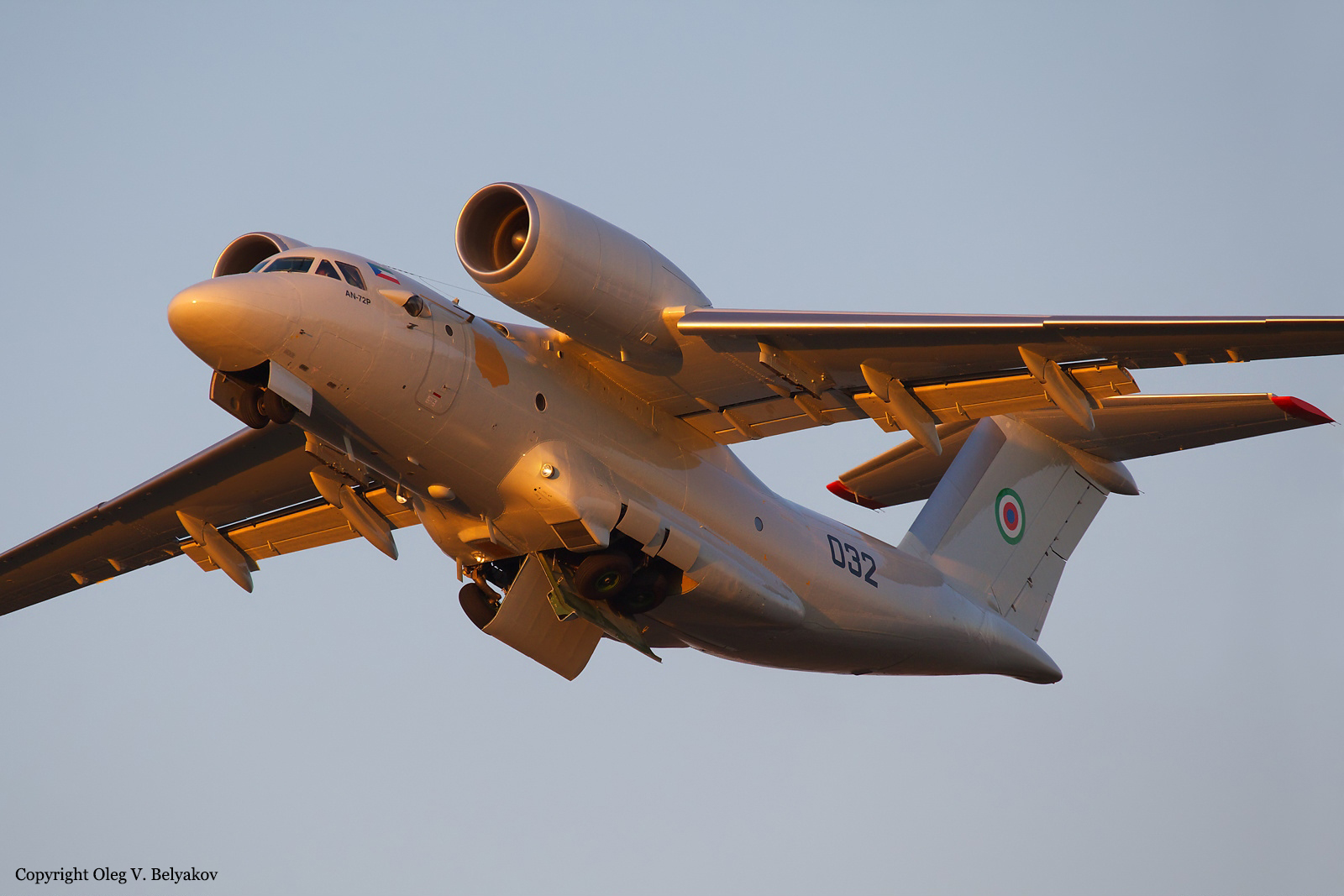 Crash of an Antonov AN-72 in Shymkent: 27 killed

Type of aircraft:
Antonov AN-72
Operator:
Kazakhstan Border Guards
Registration:
UP-72859
Flight Phase:
Flight
Flight Type:
Government
Survivors:
No
Site:
Mountains
Schedule:
Astana - Shymkent
MSN:
36576092859
YOM:
1990
Location:
Shymkent
South Kazakhstan
Country:
Kazakhstan
Region:
Asia
Crew on board:
7
Crew fatalities:
Pax on board:
20
Pax fatalities:
Other fatalities:
Total fatalities:
27
Circumstances:
The aircraft was completing a flight on behalf of the Kazakh Border Guard Corp. While approaching Shymkent in low visibility due to the night and heavy snow falls, the aircraft hit a mountain slope located 21 km from the airport and was destroyed by impact forces. All 27 occupants were killed, among them Tourganbek Stambekov, Chief of the Kazakhtan Border Guards. It appears that the automatic pilot system failed shortly after take off from Astana and the captain decided to continue the flight. Two minutes and 40 seconds later, the radio altimeter failed as well and the crew continued the flight, referring to the barometric altimeter. But these suffered a momentary failure 19 minutes later and several differences were observed with the altitude parameters. During the descent to Shymkent in poor weather conditions, the captain failed to set the correct pressure in the barometric altimeters so the setting he was taking for reference was wrong. At the time of the accident, the aircraft was 385 meters too low and as a result, the Board concluded that the accident was the consequence of a controlled flight into terrain (CFIT).
Probable cause:
Controlled flight into terrain (CFIT). 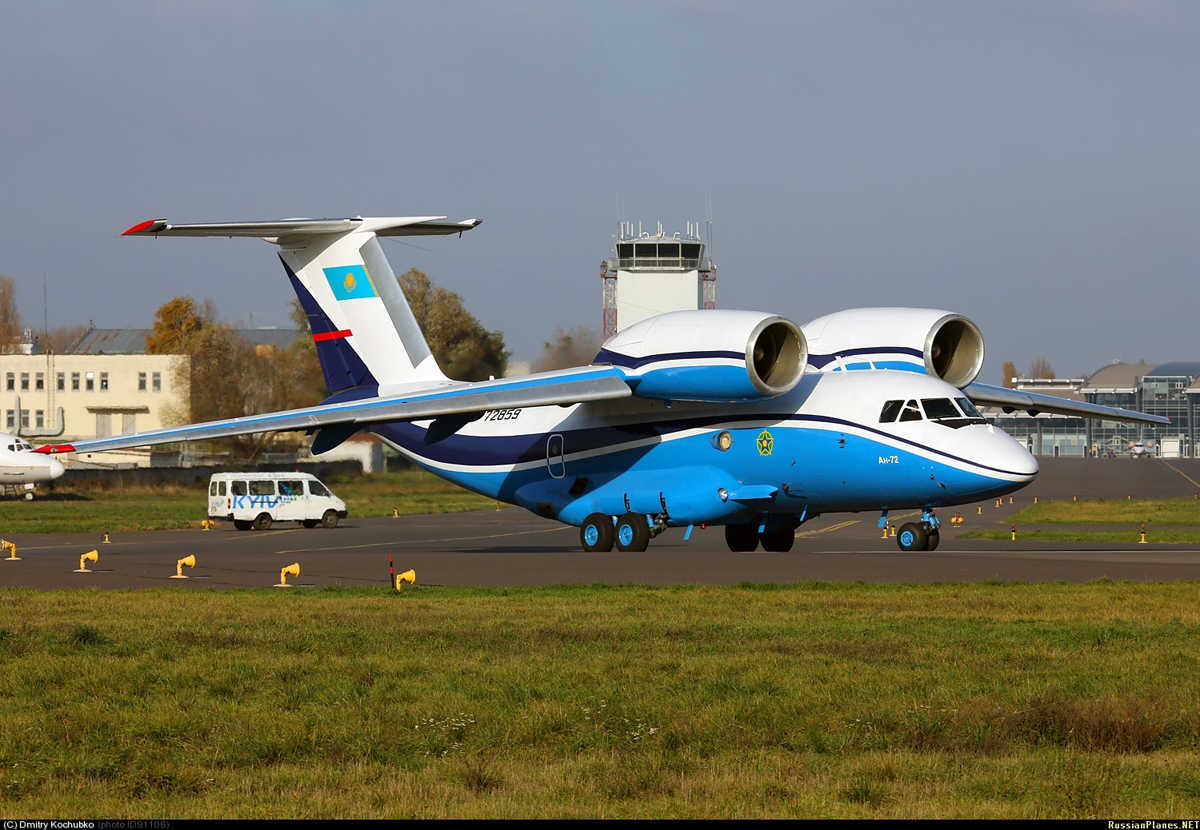 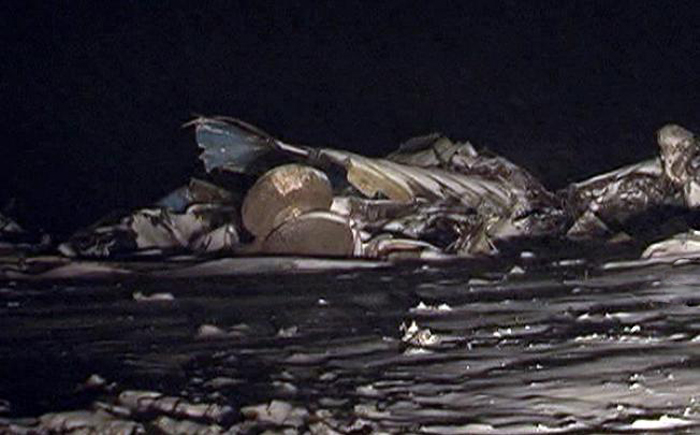 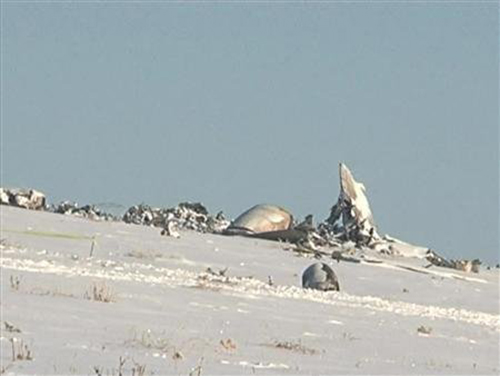 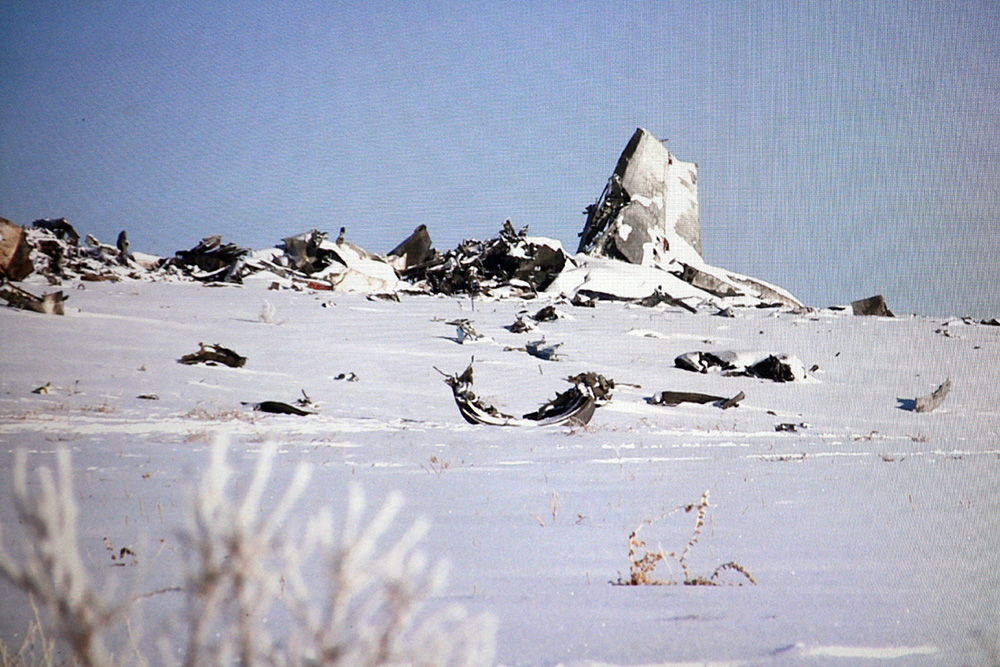 Crash of an Antonov AN-72 in Wamena 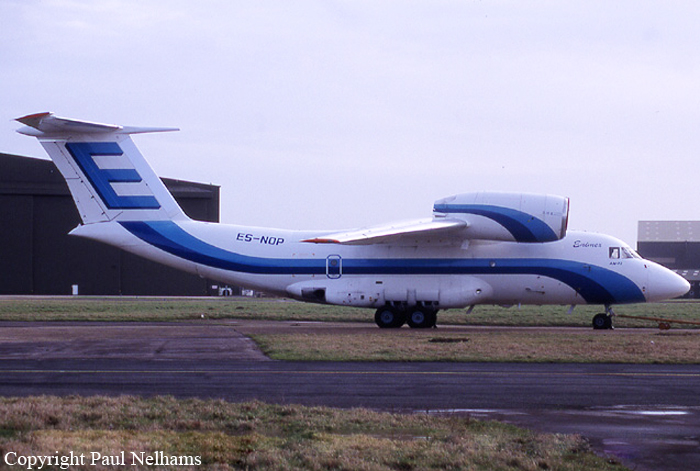 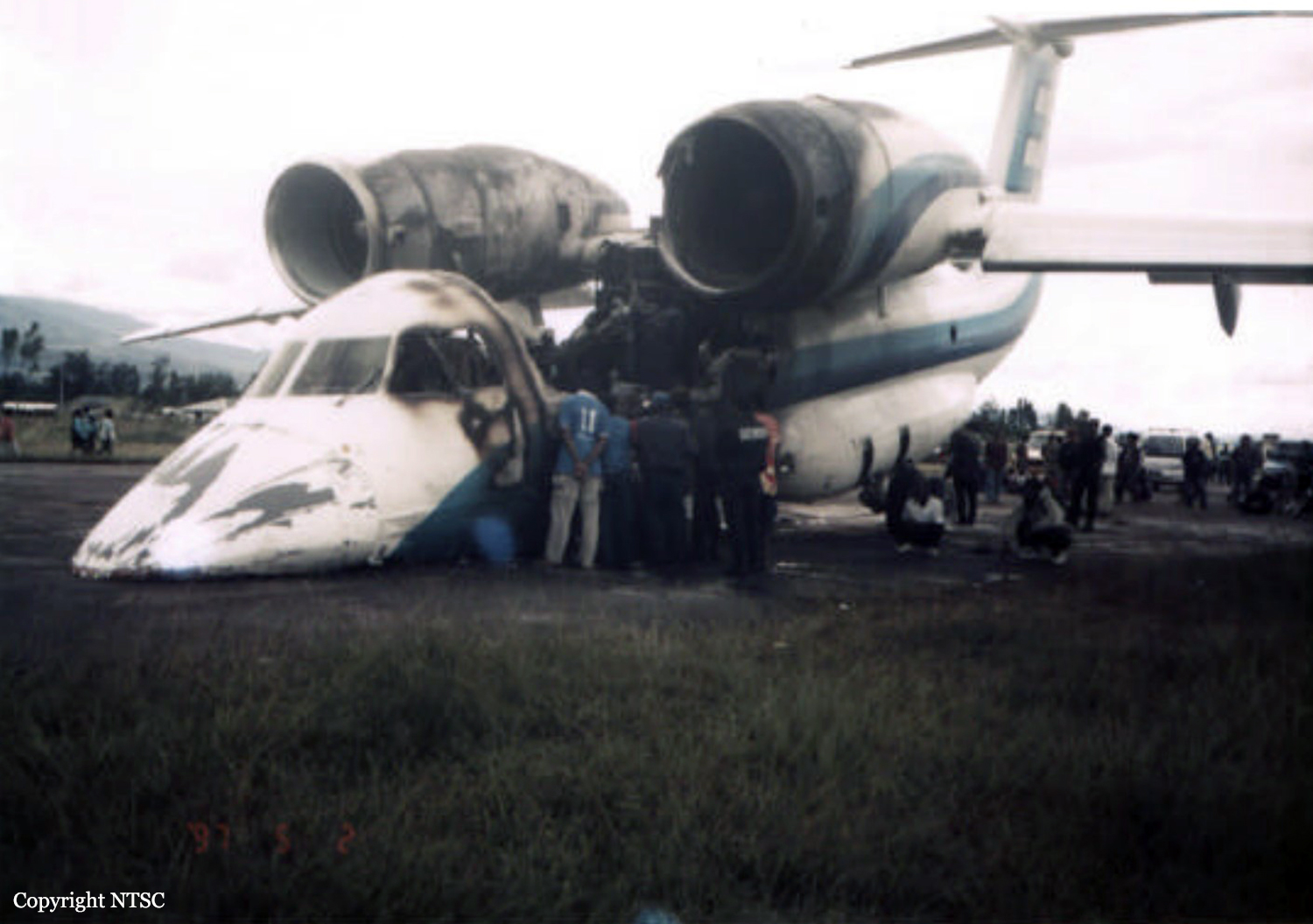 Crash of an Antonov AN-72 in Luzamba

Registration:
TL-ACW
Flight Phase:
Landing (descent or approach)
Flight Type:
Cargo
Survivors:
Yes
Site:
Airport (less than 10 km from airport)
MSN:
36572090796
YOM:
1990
Location:
Luzamba
Lunda Norte
Country:
Angola
Region:
Africa
Crew on board:
6
Crew fatalities:
Pax on board:
4
Pax fatalities:
Other fatalities:
Total fatalities:
0
Circumstances:
On final approach to Luzamba Airport, the crew encountered atmospheric turbulences. The captain increased engine power, causing the approach speed to increase as well. The aircraft, too high, landed too far down the runway. Realizing the situation after touchdown, the captain abandoned the landing manoeuvre and initiated a go-around procedure. While climbing, the crew was aware he should follow a downwind circuit at low height because of hostile actions in the area. During the second approach, the crew forgot to lower the landing gear so the aircraft landed on its belly and slid for about 350 metres before coming to rest on the runway. All 10 occupants escaped uninjured while the aircraft was damaged beyond repair.
Probable cause:
The crew failed to follow the approach checklist and forgot to lower the landing gear during the second approach. As the landing gear were not lowered, an alarm sounded in the cockpit but the crew thought this was a mistake and failed to lower the gear or to initiate a second go-around procedure.

Crash of an Antonov AN-72 off Angola: 11 killed

Registration:
ER-ACF
Flight Phase:
Flight
Flight Type:
Cargo
Survivors:
No
Site:
Lake, Sea, Ocean, River
Schedule:
Abidjan - Rundu
MSN:
36572094888
YOM:
1981
Location:
Angola
All Angola
Country:
Angola
Region:
Africa
Crew on board:
5
Crew fatalities:
Pax on board:
6
Pax fatalities:
Other fatalities:
Total fatalities:
11
Circumstances:
The aircraft departed Abidjan on a cargo flight to Rundu, Namibia. While cruising along the Angolan coast, the crew contacted ATC when he was apparently forced to divert to Angola for control purposes. It is believed that the crew refused to divert to Angola and continued his route. Eventually, the decision to shut the aircraft down was taken by the Angolan Army. The aircraft crashed in the Atlantic Ocean off the Angolan coast, killing all 11 occupants.
Probable cause:
Shot down. 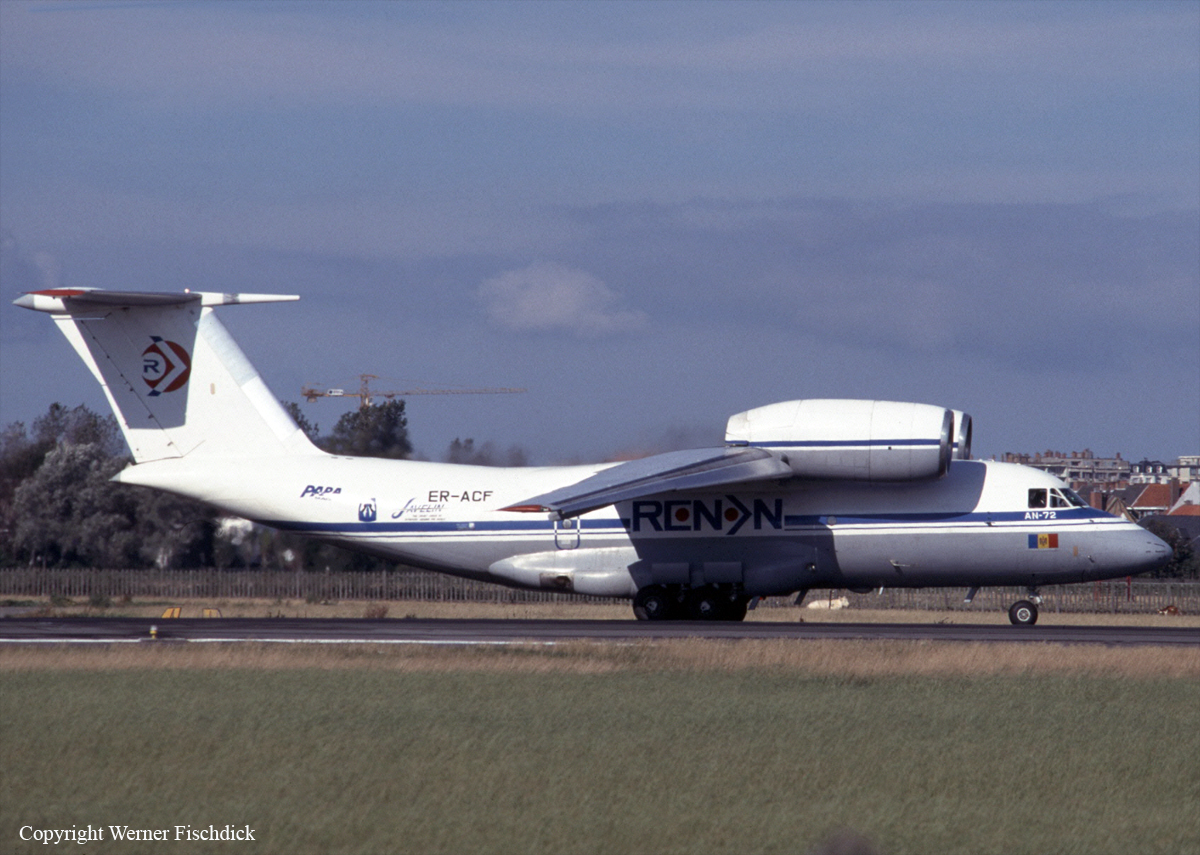 Crash of an Antonov AN-72 in Nagurskoye