Registration:
P2-PXY
Flight Phase:
Takeoff (climb)
Flight Type:
Cargo
Survivors:
Yes
Site:
Airport (less than 10 km from airport)
Schedule:
Madang – Tabubil – Kuinga
MSN:
087
YOM:
1988
Location:
Madang
Madang
Country:
Papua New Guinea
Region:
Oceania
Crew on board:
3
Crew fatalities:
Pax on board:
0
Pax fatalities:
Other fatalities:
Total fatalities:
0
Captain / Total flying hours:
7100
Captain / Total hours on type:
3433.00
Copilot / Total flying hours:
3020
Copilot / Total hours on type:
2420
Circumstances:
Aircraft was performing a flight to Kuinga with an intermediate stop at Tabubil with a cargo consisting of 400 boxes of cigarettes for a total weight of 3,710 kilos. While accelerating on runway 25, just two seconds after Vr, captain decided to abort the takeoff procedure because the aircraft did not lift off. He started an emergency brake procedure but the aircraft was unable to stop within the remaining runway. It overrun, went through a fence and down an embankment before coming to rest in flames in the Meiro Creek. All three crew escaped themselves and were uninjured, except one slightly. Aircraft was partially destroyed by impact forces and post impact fire. 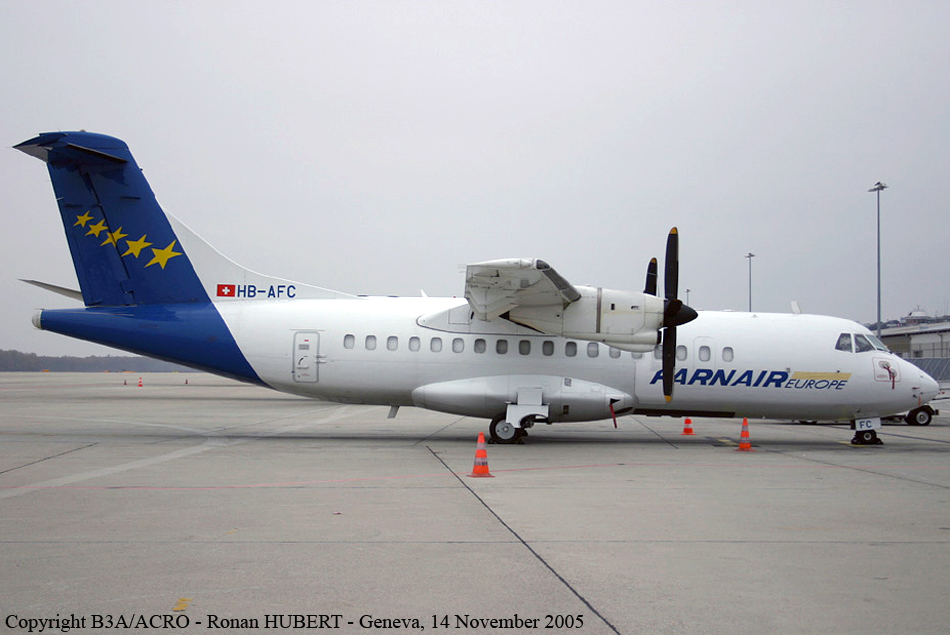 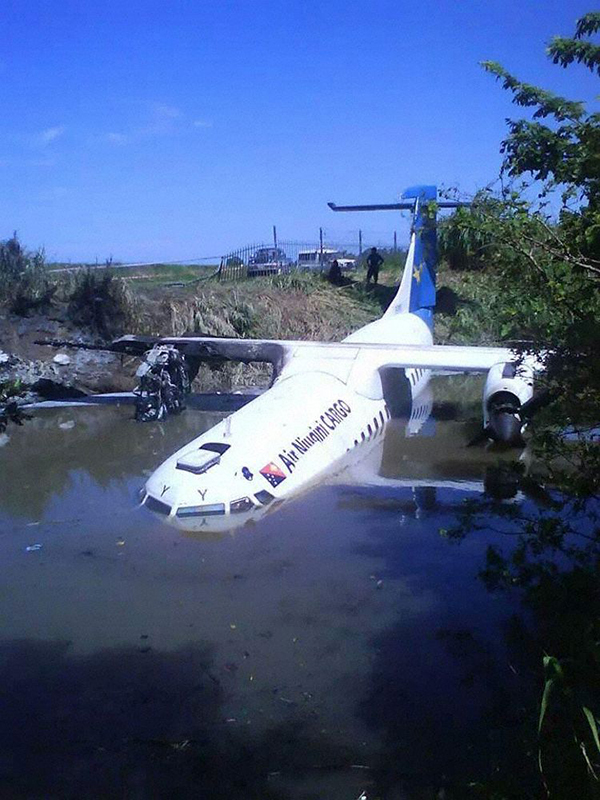 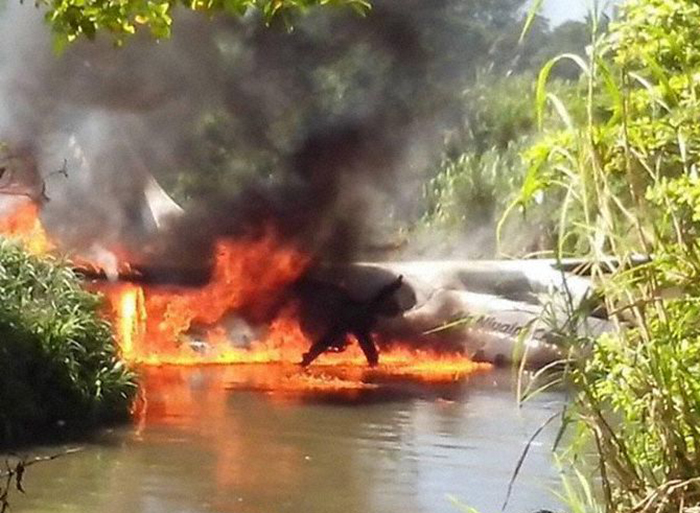 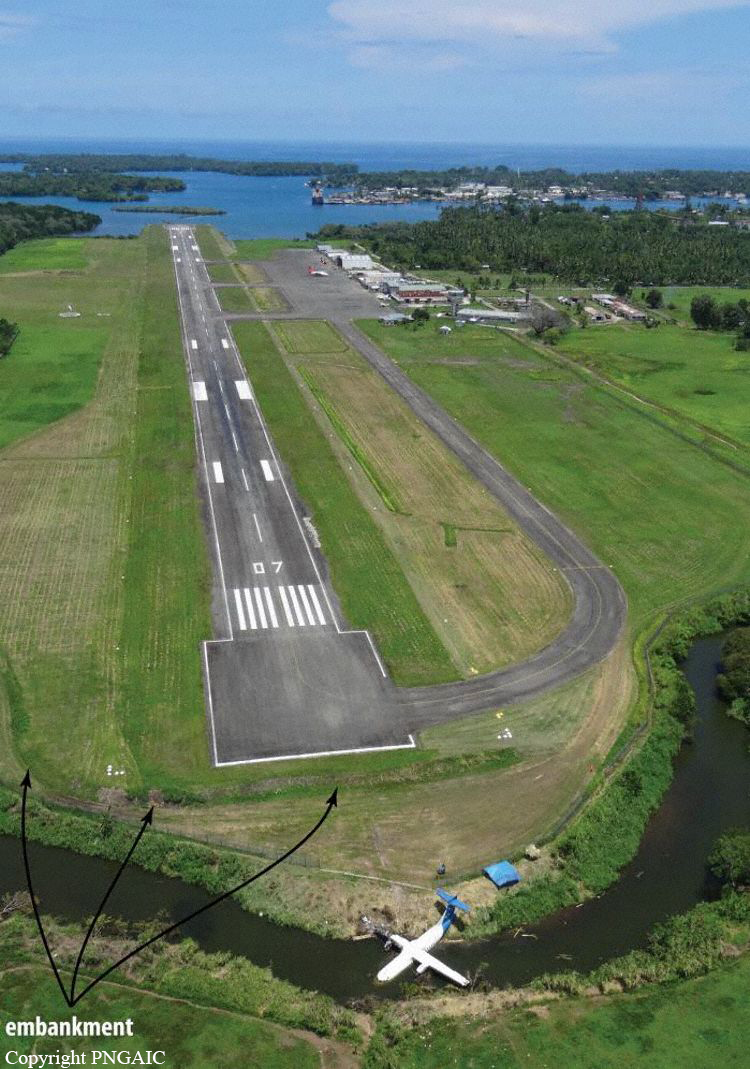 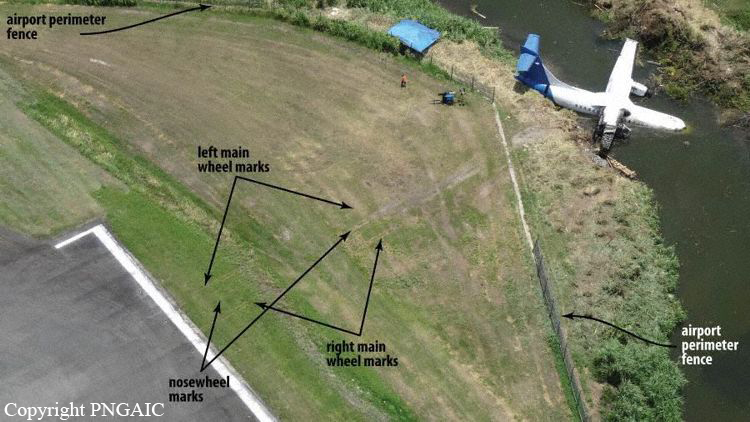 Registration:
P2-MCJ
Flight Phase:
Landing (descent or approach)
Flight Type:
Scheduled Revenue Flight
Survivors:
Yes
Site:
Plain, Valley
Schedule:
Port Moresby - Lae - Madang
MSN:
125
YOM:
1988
Flight number:
CG1600
Location:
Madang
Madang
Country:
Papua New Guinea
Region:
Oceania
Crew on board:
4
Crew fatalities:
Pax on board:
28
Pax fatalities:
Other fatalities:
Total fatalities:
28
Captain / Total flying hours:
18200
Captain / Total hours on type:
500.00
Copilot / Total flying hours:
2725
Copilot / Total hours on type:
391
Aircraft flight hours:
38421
Aircraft flight cycles:
48093
Circumstances:
While approaching Madang, aircraft crashed in a jungle 33 km southeast of Airport. SAR arrived on scene few hours later and evacuated four people seriously injured while all 28 other occupants were killed. While descending to Madang, overspeed alarm sounded in the cockpit while both propellers oversped simultaneously and exceeded their maximum RPM limit by about 60%. Crew sent a mayday message and told ATC that both engines stopped. Shortly later, aircraft hit the ground in a relative flat position and was destroyed by impact forces and post crash fire. The four survivors were the captain, the copilot, a stewardess and a passenger.
Probable cause:
From the evidence available, the following findings are made with respect to the double propeller overspeed 35 km south south east of Madang on 13 October 2011 involving a Bombardier Inc. DHC-8-103 aircraft, registered P2-MCJ. They should not be read as apportioning blame or liability to any organisation or individual.
Contributing safety factors:
 The Pilot-in-Command moved the power levers rearwards below the flight idle gate shortly after the VMO overspeed warning sounded. This means that the release triggers were lifted during the throttle movement.
 The power levers were moved further behind the flight idle gate leading to ground beta operation in flight, loss of propeller speed control, double propeller overspeed, and loss of usable forward thrust, necessitating an off-field landing.
 A significant number of DHC-8-100, -200, and -300 series aircraft worldwide did not have a means of preventing movement of the power levers below the flight idle gate in flight, or a means to prevent such movement resulting in a loss of propeller speed control.
Other safety factors:
 Prior to the VMO overspeed warning, the Pilot-in-Command allowed the rate of descent to increase to 4,200 ft per minute and the airspeed to increase to VMO.
 The beta warning horn malfunctioned and did not sound immediately when one or both of the flight idle gate release triggers were lifted. When the beta warning horn did sound, it did so intermittently and only after the double propeller overspeed had commenced. The sound of the beta warning horn was masked by the noise of the propeller overspeeds.
 There was an uncommanded feathering of the right propeller after the overspeed commenced due to a malfunction within the propeller control beta backup system during the initial stages of the propeller overspeed.
 The right propeller control unit (PCU) fitted to MCJ was last overhauled at an approved overhaul facility which had a quality escape issue involving incorrect application of beta switch reassembly procedures, after a service bulletin modification. The quality escape led to an uncommanded feather incident in an aircraft in the United States due to a beta switch which stuck closed.
 Due to the quality escape, numerous PCU‟s were recalled by the overhaul facility for rectification. The right PCU fitted to MCJ was identified as one of the units that may have been affected by the quality escape and would have been subject to recall had it still been in service.
The FDR data indicated that the right PCU fitted to MCJ had an uncommanded feather, most likely due to a beta switch stuck in the closed position, induced by the propeller overspeed. It was not possible to confirm if the overhaul facility quality escape issue contributed to the beta switch sticking closed, because the PCU was destroyed by the post-impact fire.
 The landing gear and flaps remained retracted during the off-field landing. This led to a higher landing speed than could have been achieved if the gear and flaps had been extended, and increased the impact forces on the airframe and its occupants.
 No DHC-8 emergency procedures or checklists were used by the flight crew after the emergency began.
 The left propeller was not feathered by the flight crew after the engine failed.
 The investigation identified several occurrences where a DHC-8 pilot inadvertently moved one or both power levers behind the flight idle gate in flight, leading to a loss of propeller speed control. Collectively, those events indicated a systemic design issue with the integration of the propeller control system and the aircraft.
Other key findings:
 The flaps and landing gear were available for use after the propeller overspeeds and the engine damage had occurred.
 There was no regulatory requirement to fit the beta lockout system to any DHC-8 aircraft outside the USA at the time of the accident.
 The autopilot could not be used during the accident flight.
 The operator‟s checking and training system did not require the flight crew to have demonstrated the propeller overspeed emergency procedure in the simulator.
 After the accident, the aircraft manufacturer identified a problem in the beta warning horn system that may have led to failures not being identified during regular and periodic tests of the system.
Final Report: 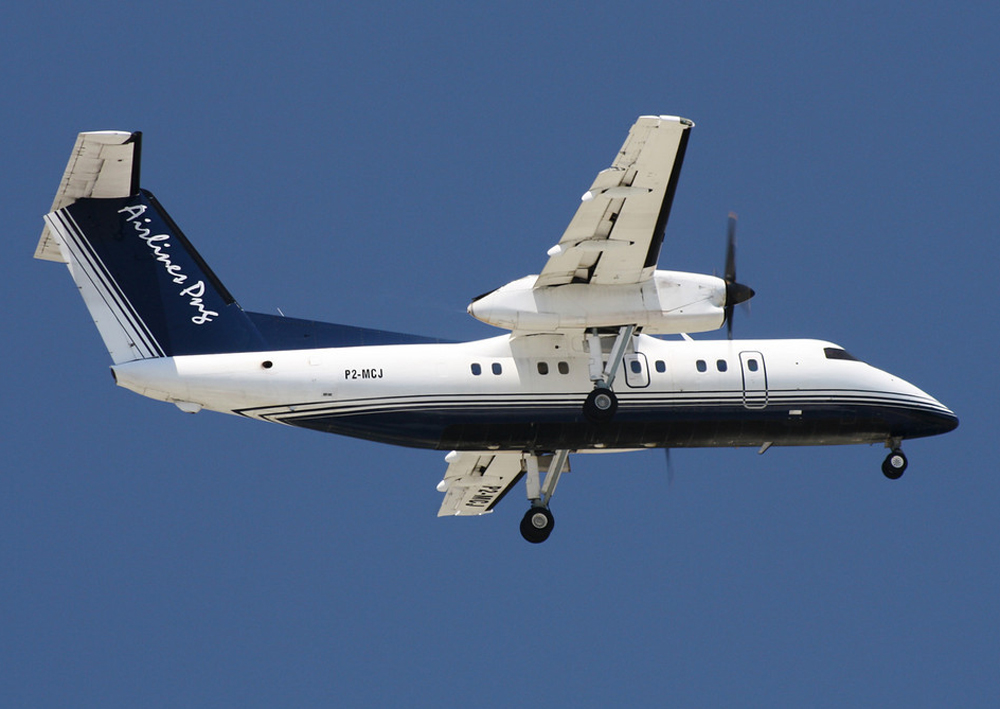 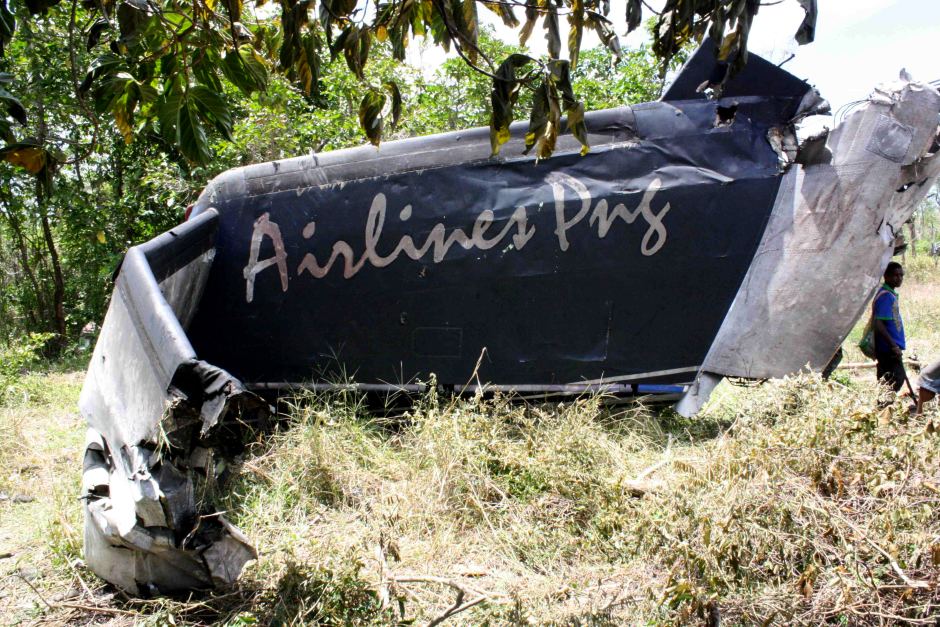 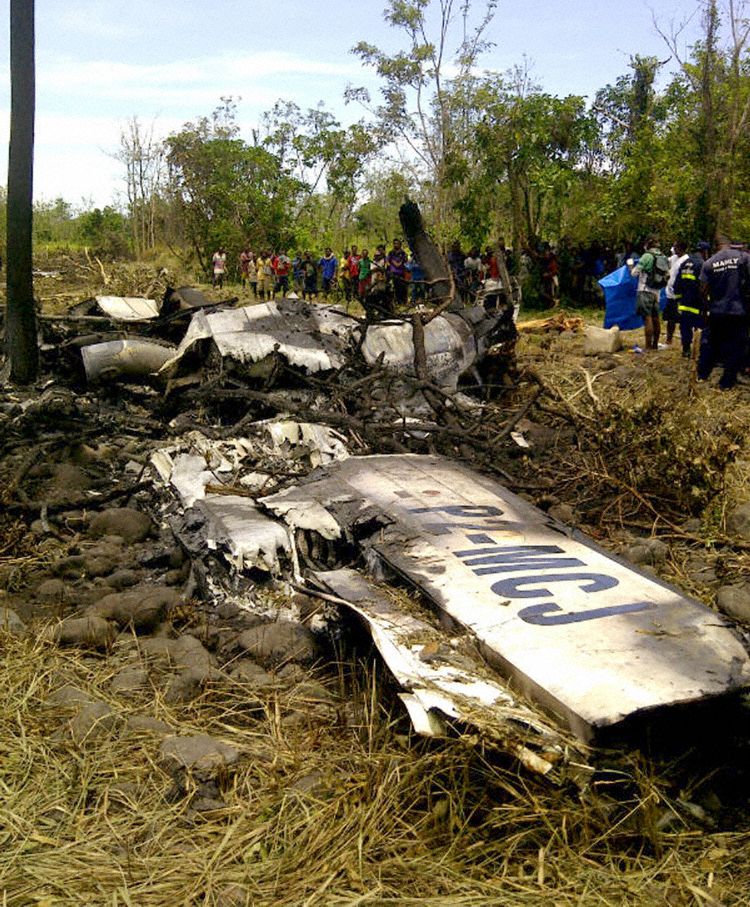 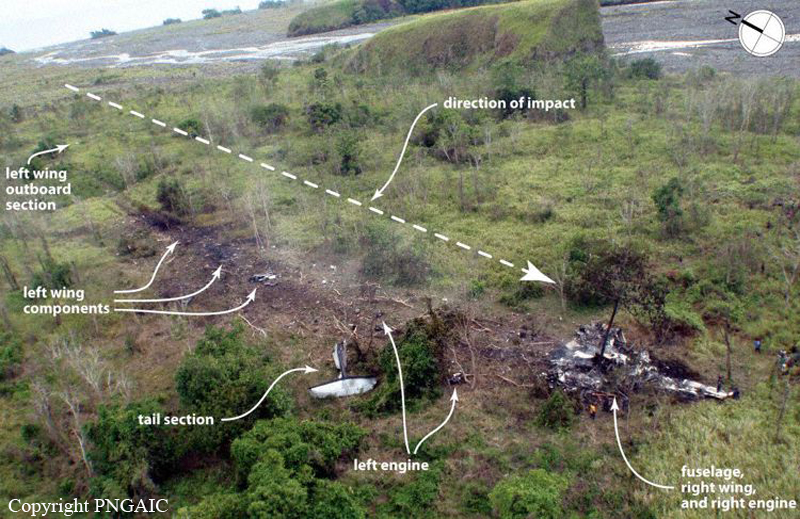 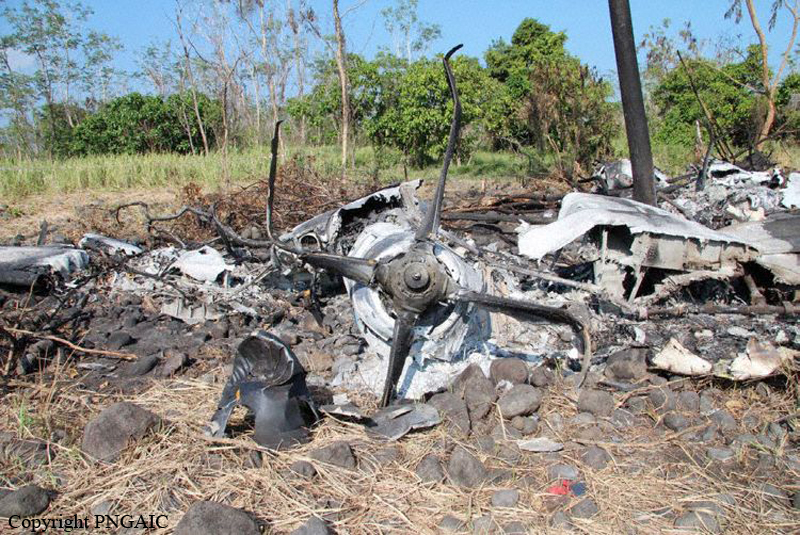 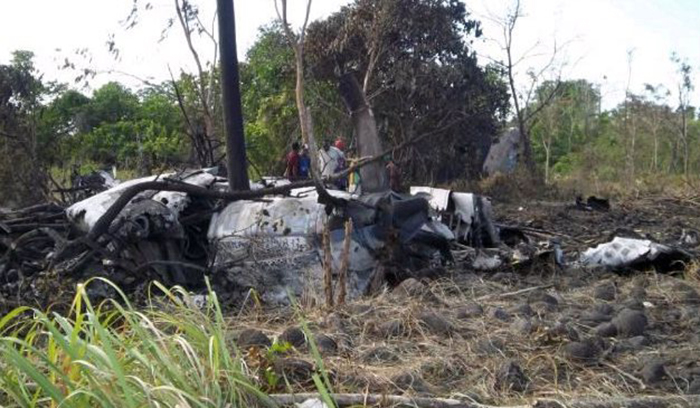 Crash of a Britten-Norman BN-2A-26 Islander in Tep Tep: 8 killed 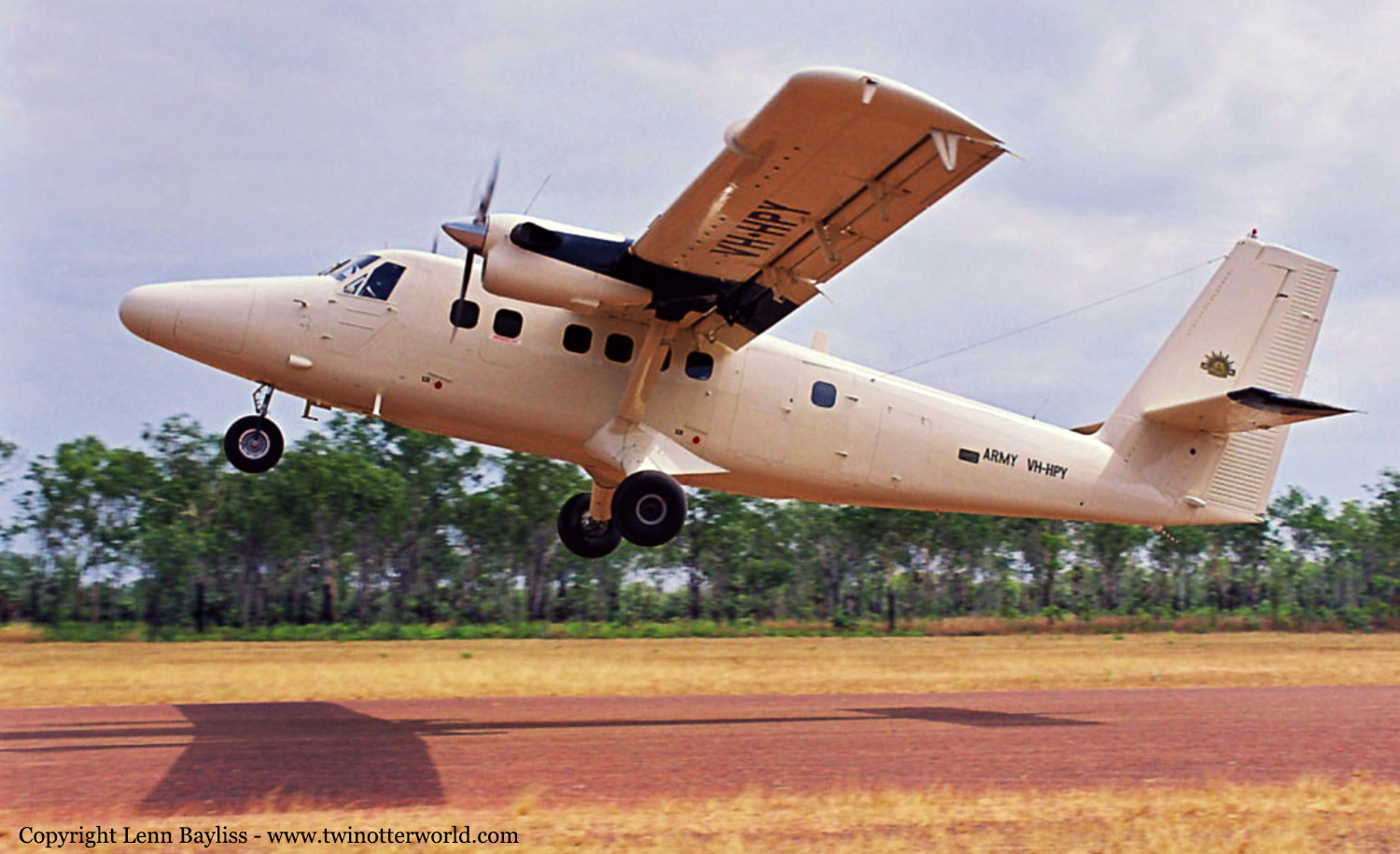 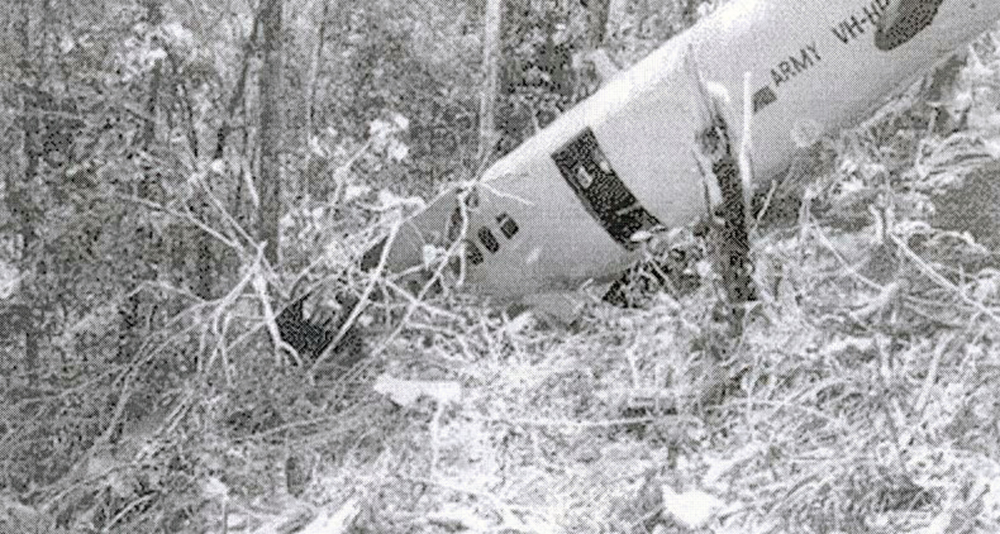 Registration:
P2-NAM
Flight Phase:
Landing (descent or approach)
Flight Type:
Scheduled Revenue Flight
Survivors:
Yes
Site:
Airport (less than 10 km from airport)
Schedule:
Madang - Bundi
MSN:
207
YOM:
1970
Location:
Begesin
Madang
Country:
Papua New Guinea
Region:
Oceania
Crew on board:
1
Crew fatalities:
Pax on board:
11
Pax fatalities:
Other fatalities:
Total fatalities:
2
Circumstances:
While approaching Bundi Airport on a flight from Madang, the pilot decided to divert to Begesin Airport for unknown reason. On final approach to Begesin Airstrip, he extended the approach and landed too far down the runway. Unable to stop within the remaining distance, the aircraft overran and crashed in a ravine. The pilot and a passenger were killed. 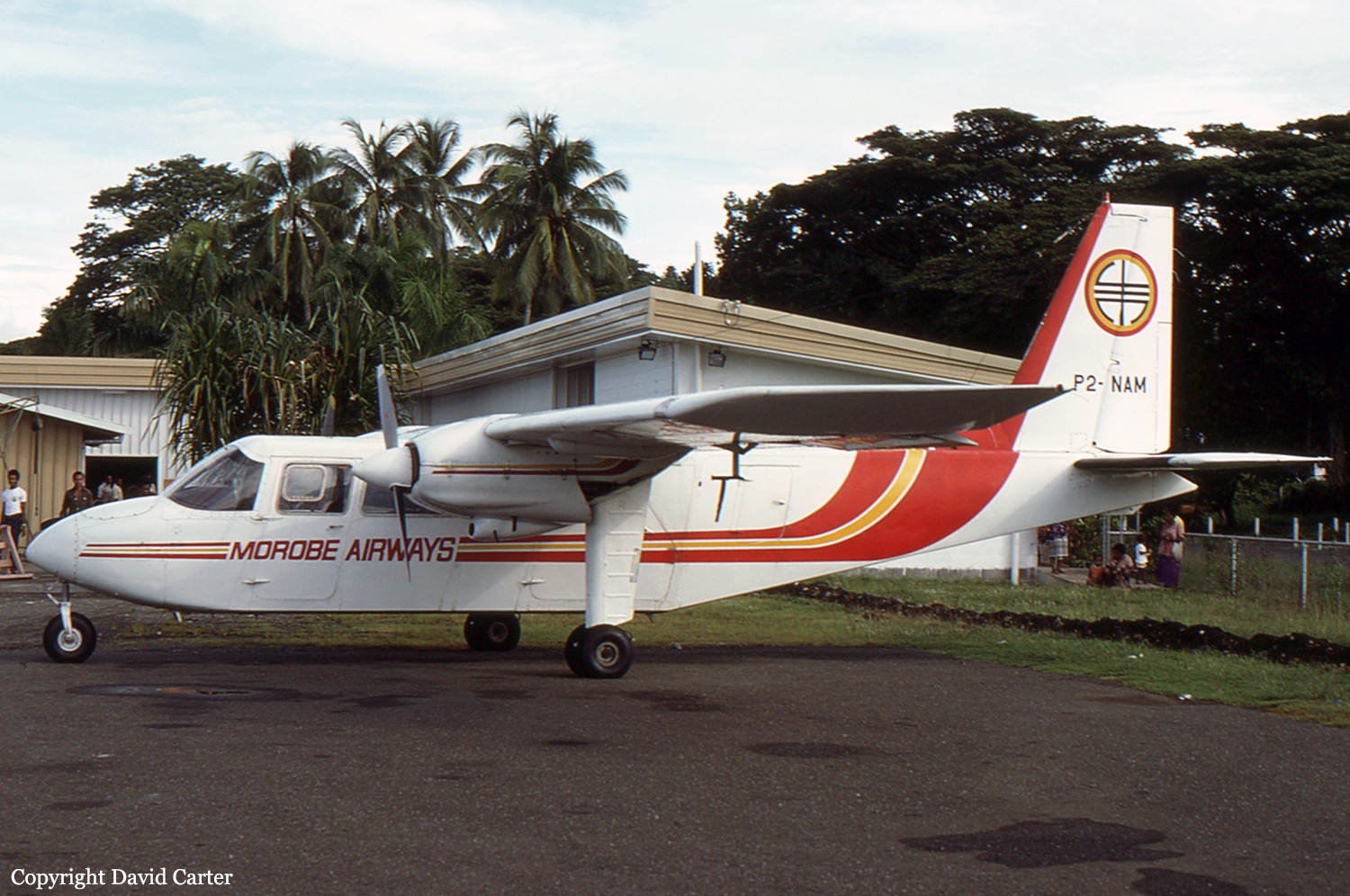 Crash of a Fokker F28 Fellowship 1000 in Madang

Registration:
P2-ANB
Flight Phase:
Landing (descent or approach)
Flight Type:
Scheduled Revenue Flight
Survivors:
Yes
Site:
Airport (less than 10 km from airport)
Schedule:
Port Moresby – Lae – Madang
MSN:
11049
YOM:
1972
Flight number:
PX128
Location:
Madang
Madang
Country:
Papua New Guinea
Region:
Oceania
Crew on board:
4
Crew fatalities:
Pax on board:
35
Pax fatalities:
Other fatalities:
Total fatalities:
0
Circumstances:
Following an uneventful flight from Lae, the crew started the approach to Madang Airport runway 25. The visibility was limited by night and poor weather conditions. In heavy rain falls, the captain realized that all conditions were not met to land and decided to initiate a go-around. Following a short holding pattern, he started the approach to runway 07. The aircraft landed 300 metres past the runway threshold. On a wet runway surface, the aircraft was unable to stop within the remaining distance, overran and came to rest in a ravine. Due to torrential rain, all 39 occupants preferred to stay in the aircraft and were evacuated few dozen minutes later only. The aircraft was damaged beyond repair.
Probable cause:
The crew adopted a wrong approach configuration, causing the aircraft to land 300 metres past the runway threshold, reducing the landing distance available. The following contributing factors were reported:
- All conditions were not met for a safe landing,
- Wet runway surface,
- Poor braking action,
- Poor weather conditions,
- Limited visibility,
- Aquaplaning,
- Poor flight and approach planning. 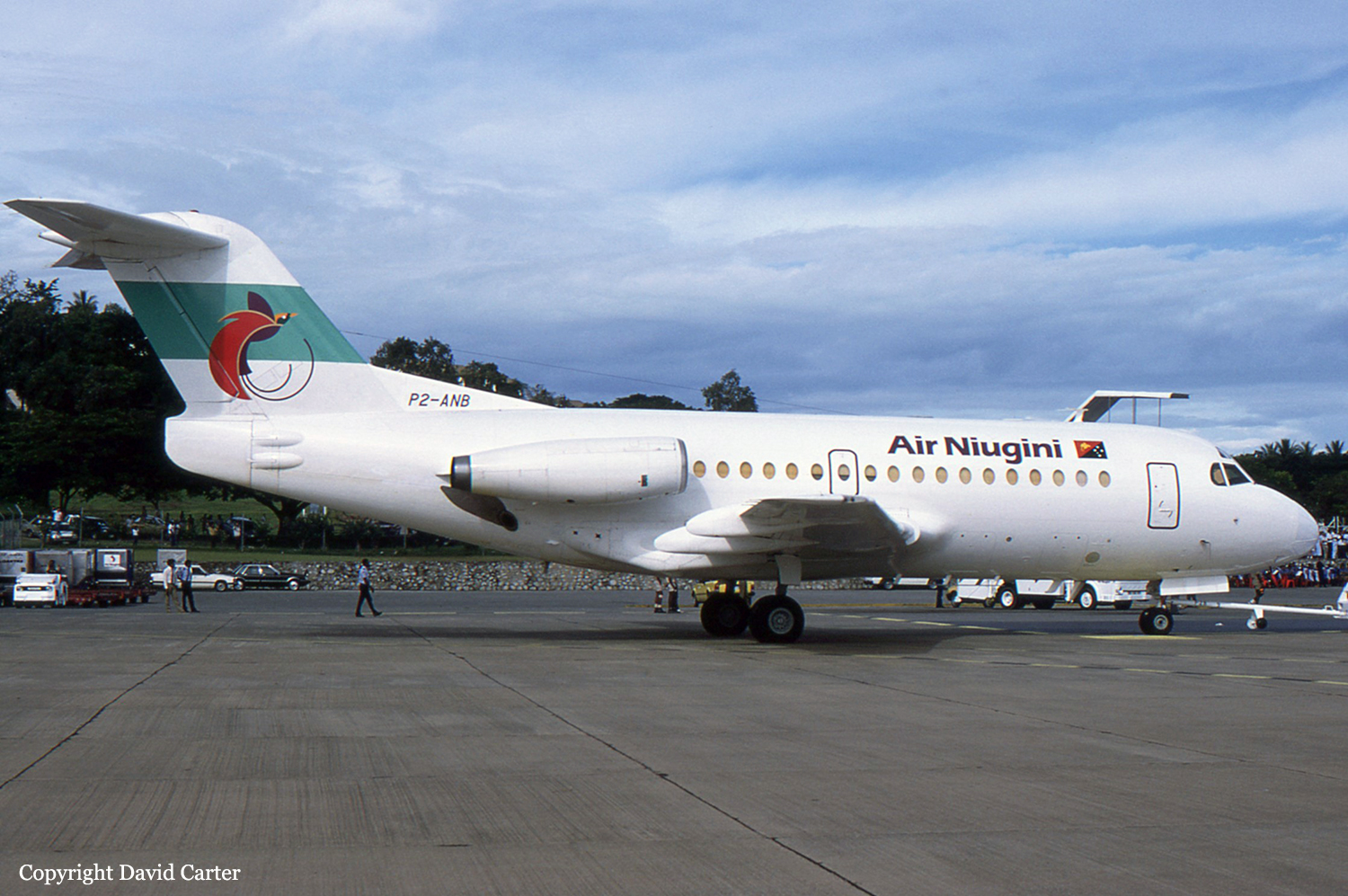 Crash of a Britten-Norman BN-2A-21 Islander in Bank: 4 killed

Registration:
P2-HBE
Flight Phase:
Takeoff (climb)
Flight Type:
Scheduled Revenue Flight
Survivors:
No
Site:
Mountains
Schedule:
Bank - Mount Hagen
MSN:
815
YOM:
1978
Location:
Bank
Madang
Country:
Papua New Guinea
Region:
Oceania
Crew on board:
2
Crew fatalities:
Pax on board:
2
Pax fatalities:
Other fatalities:
Total fatalities:
4
Circumstances:
After takeoff from Bank Airstrip, while climbing in the Simbai Valley, the twin engine aircraft struck the slope of a mountain and crashed about 5,3 km from Bank Airfield. All four occupants were killed.
Probable cause:
The aircraft did not have sufficient power to complete a steep climb as expected by the crew. Apparently, the aircraft stalled while completing a last turn due to an insufficient speed. Poor judgment on part of the crew. 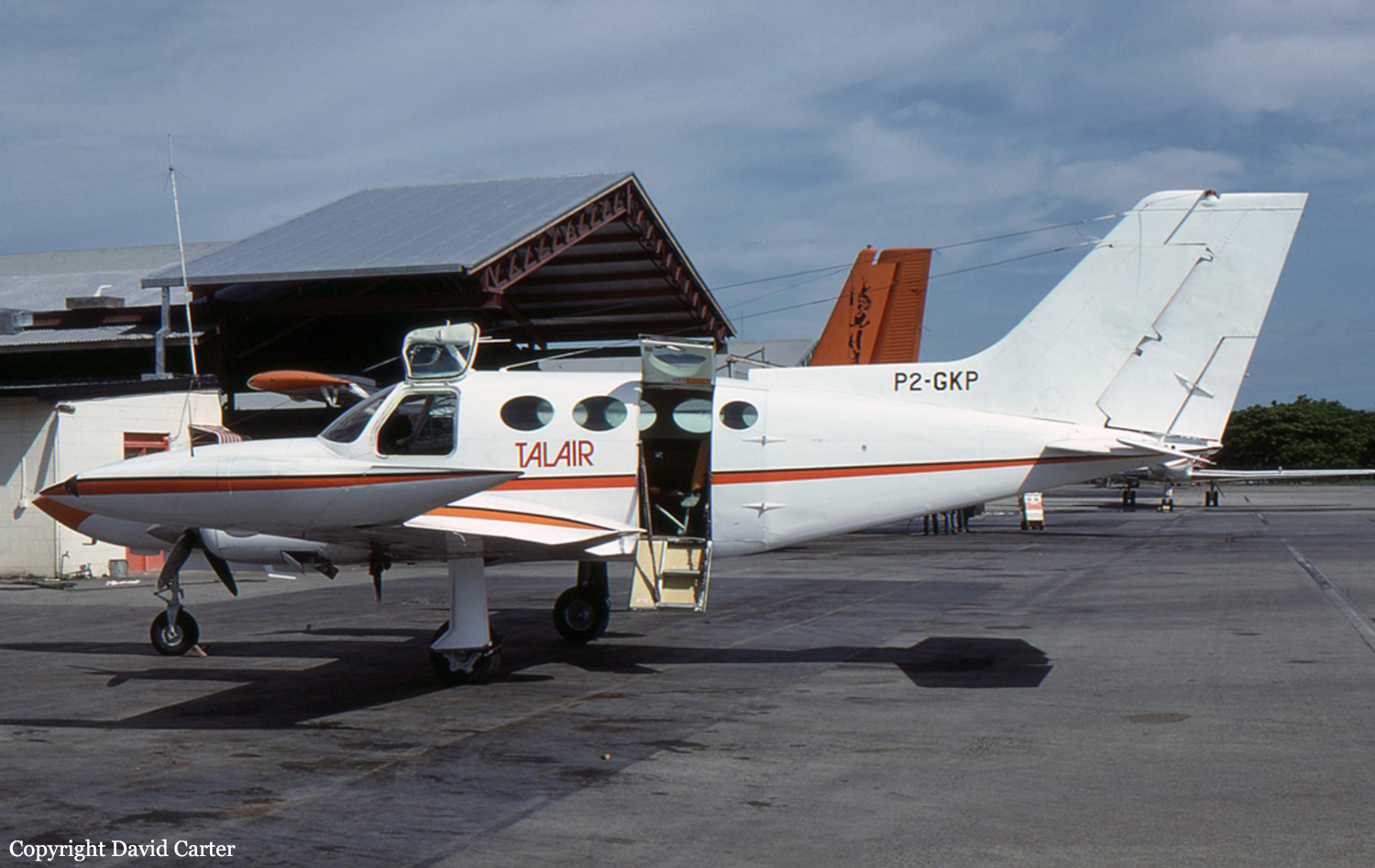 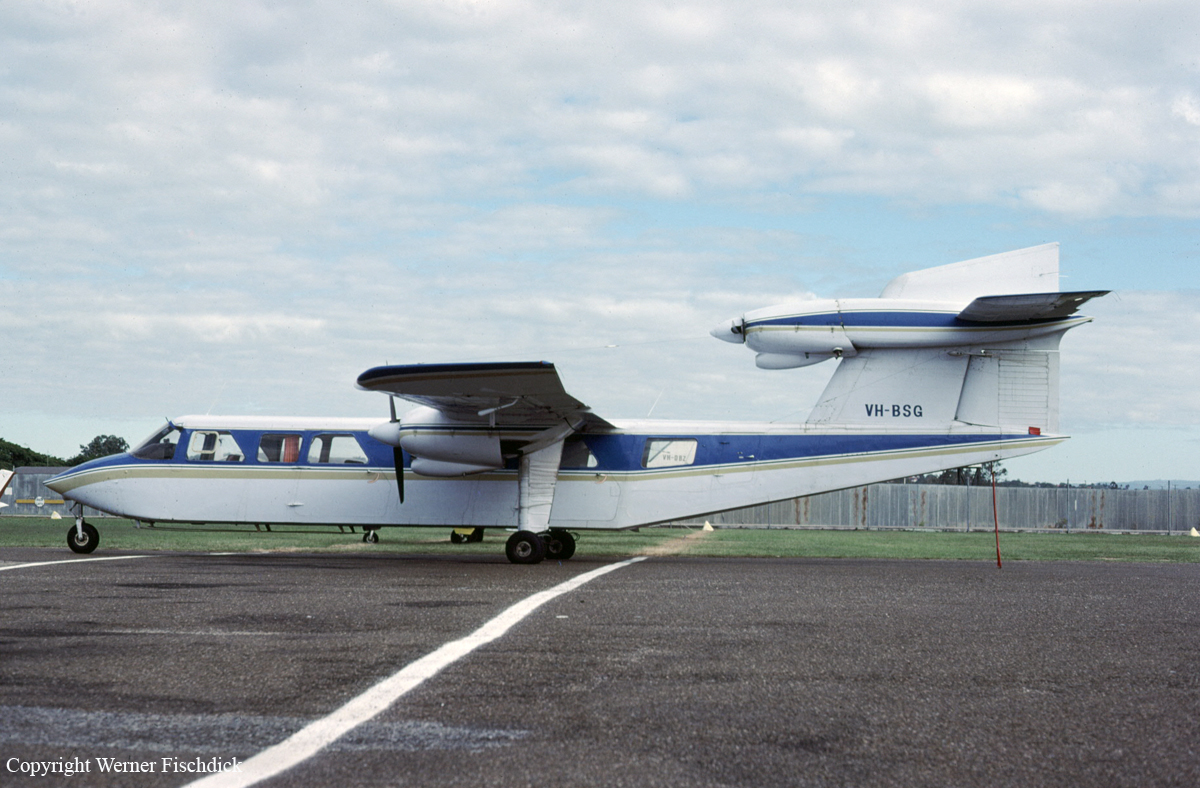 Crash of a Cessna 402A near Annanberg