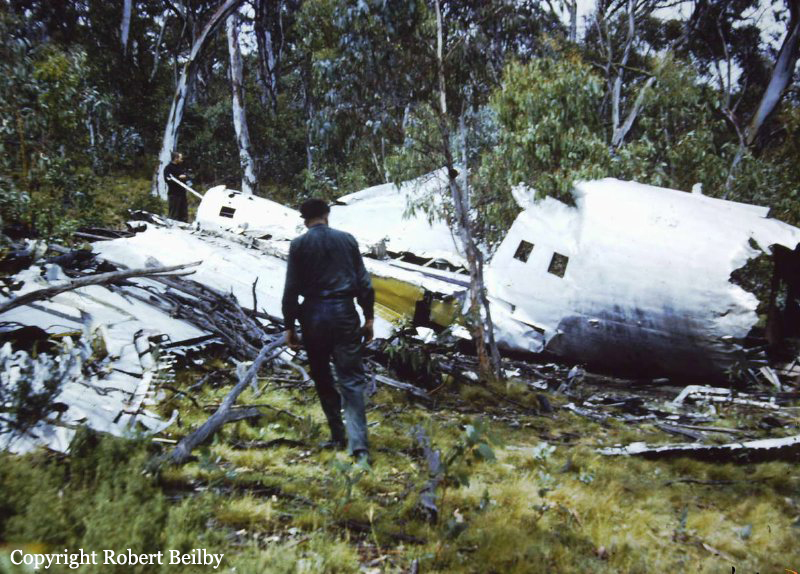 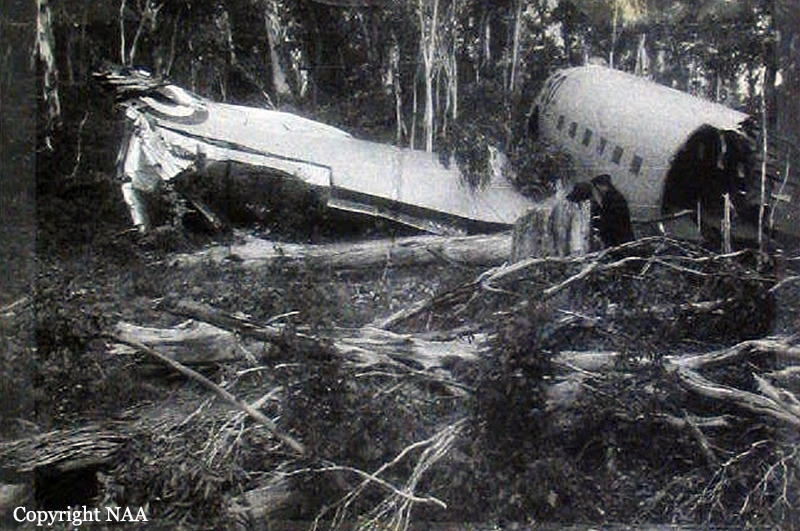 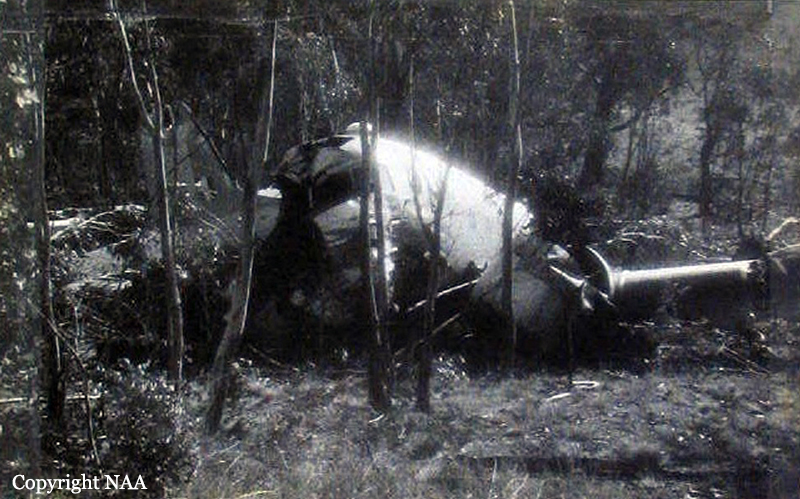 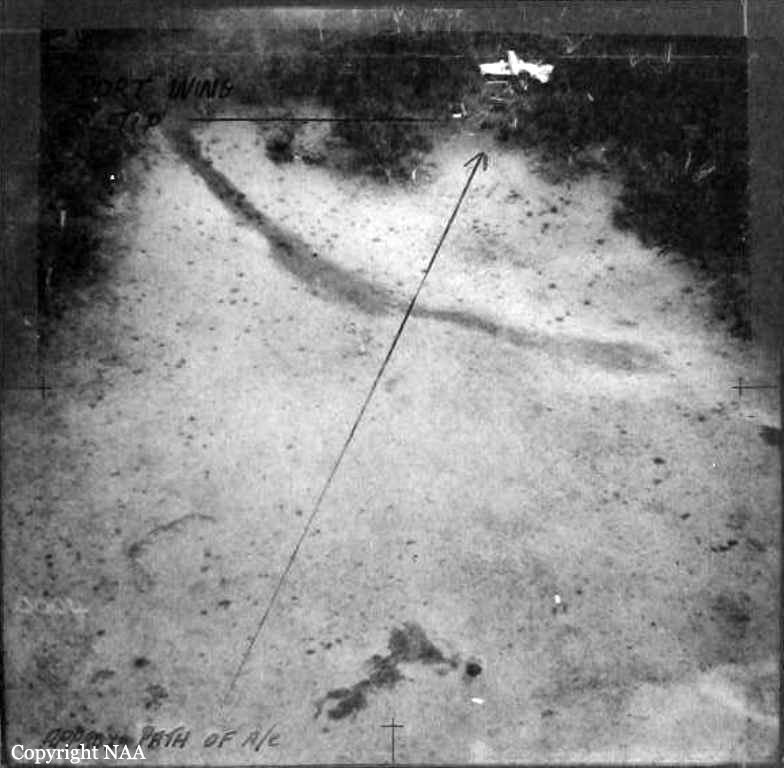 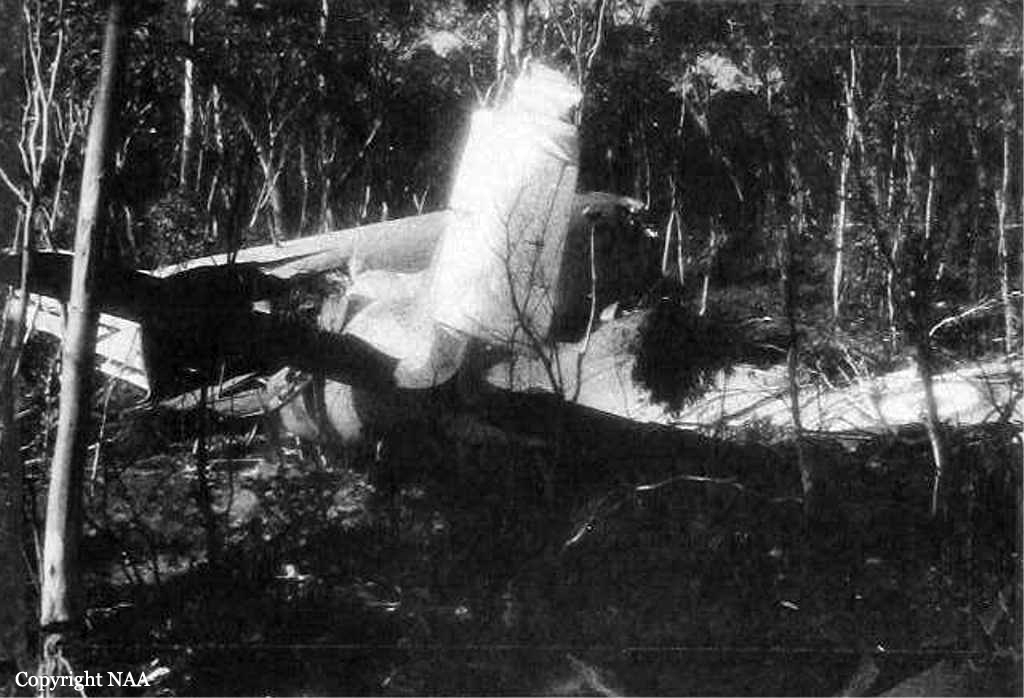 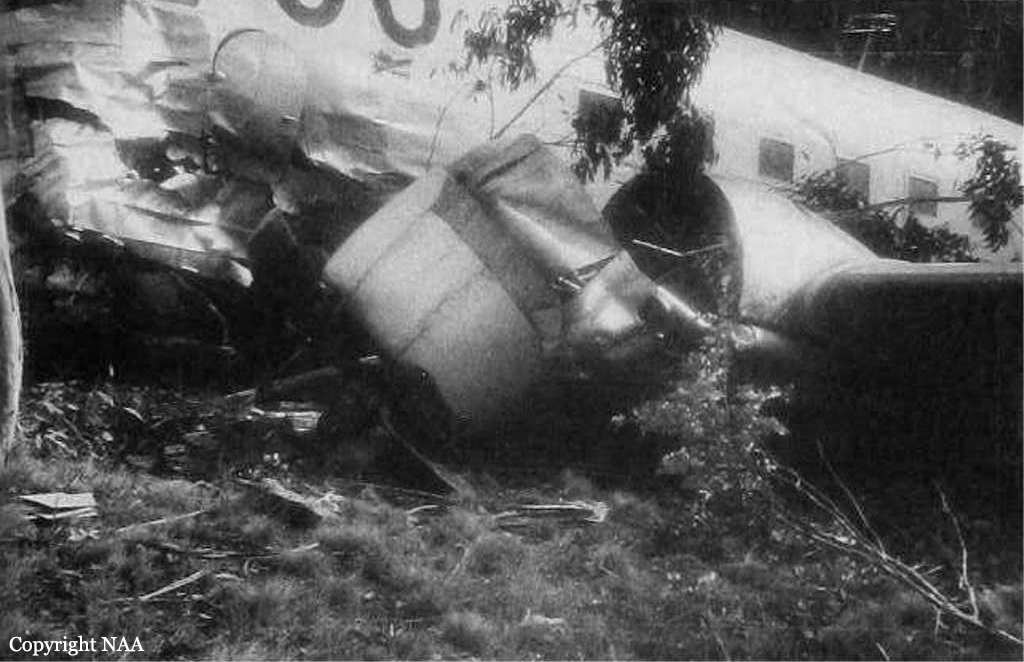 Registration:
VH-BBV
Flight Phase:
Takeoff (climb)
Flight Type:
Cargo
Survivors:
No
Site:
Lake, Sea, Ocean, River
Schedule:
Mackay – Rockhampton
MSN:
12360
YOM:
1944
Location:
Mackay
Queensland
Country:
Australia
Region:
Oceania
Crew on board:
2
Crew fatalities:
Pax on board:
0
Pax fatalities:
Other fatalities:
Total fatalities:
2
Circumstances:
One minute after its takeoff from Mackay Airport, while climbing by night, the twin engine aircraft went out of control and plunged into the sea off Mackay. The aircraft was destroyed and both crew members were killed. The crew was completing a cargo flight from Mackay to Rockhampton, carrying a load of newspapers.
Probable cause:
The assumption that the loss of control was the result of a bird strike was not ruled out. 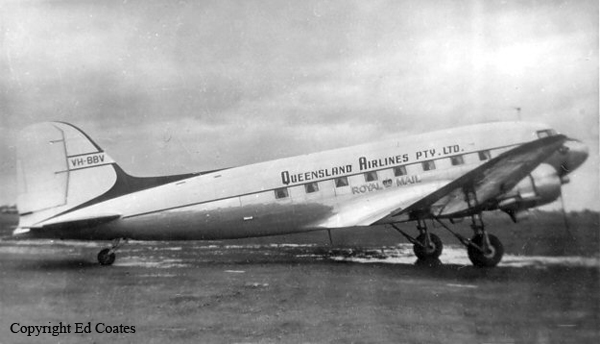 Crash of a Bristol 170 Freighter 21E in Mallala: 3 killed

Registration:
A81-2
Flight Phase:
Flight
Flight Type:
Training
Survivors:
No
Site:
Plain, Valley
MSN:
12805
YOM:
1946
Location:
Mallala
South Australia
Country:
Australia
Region:
Oceania
Crew on board:
3
Crew fatalities:
Pax on board:
0
Pax fatalities:
Other fatalities:
Total fatalities:
3
Circumstances:
While on an IFR training flight from Mallala by day in clear weather, the port mainplane parted from the fuselage. The aircraft crashed into a wheat field 2 miles from the RAAF Station. The three crew members were killed. The crash set the wheat field ablaze and the RAAF Mallala fire crews had to extinguish the the field fire to reach the crash site. The port wing was found 1.5 miles away.
Crew:
F/Lt J. D. Entwhistle,
F/O Leonard Murphy
F/O Donald Shillinglaw.
Source: http://www.goodall.com.au
Probable cause:
RAAF investigation determined that the wing was placed under severe load during a separate training flight on the morning of the accident's day. The morning exercise included recovery from unusual attitudes using only a limited instrument panel. On two occasions the training captain placed the aircraft into a steep diving turn, recovery from which pulled high G force, to the extent a second pilot seated at the Navigator position blacked out. The subsequent investigations traced the problem to fatigue failure in the wing root ends and main spar structure. Bristol produced a modification which was proven successful. Most British and European civil B170s were flown to Western Airways at Weston-super-Mare to have the extensive modification carried out at Bristol expense. Australian B170s had went to Bristol Aviation Services at Bankstown to have their wings removed and the modifications installed. 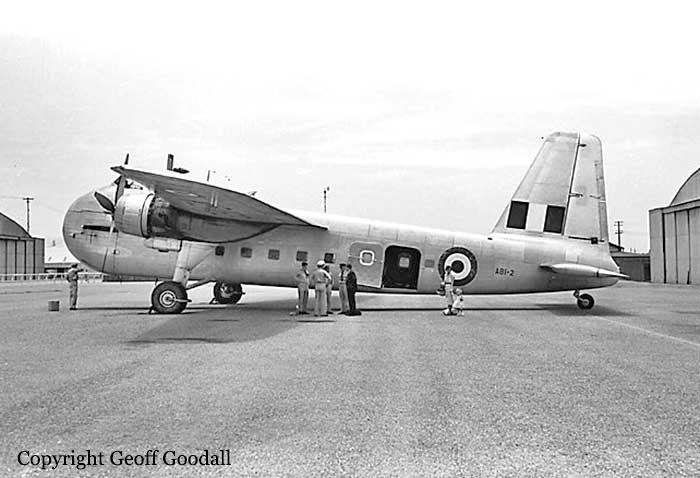 Type of aircraft:
De Havilland DH.89 Dragon Rapide
Operator:
Queensland Ambulance Transport Brigade
Registration:
VH-CFA
Flight Phase:
Flight
Flight Type:
Ambulance
Survivors:
Yes
Site:
Lake, Sea, Ocean, River
Schedule:
Iron Range – Cairns
MSN:
6713
YOM:
1944
Location:
Hinchinbrook Island
Queensland
Country:
Australia
Region:
Oceania
Crew on board:
1
Crew fatalities:
Pax on board:
2
Pax fatalities:
Other fatalities:
Total fatalities:
2
Circumstances:
The Aerial ambulance was called out to Iron Range on Cape York to collect a patient, an aboriginal stockman who had been bitten by a snake. Capt Dick Brampton was one of half a dozen ANA pilots who were rostered to fly the Ambulance plane as needed for the Cairns Ambulance Transport Brigade. On board as well was an ambulance bearer. Capt Dick Brampton took off fairly late from Iron Range, and was confronted by very low thick cloud north of Cairns. The Rapide was only VFR nor IFR and Capt Brampton could not get a fix on Cairns. He was redirected further south. He apparently ran out of fuel north of Hinchinbrook Island and landed the aircraft on the water near Brooke Island. Nearly two hours late on estimated ETA at Townsville that evening, a radio call was heard at 9.48pm “Lost, low fuel”. At 9.55pm another call saying the aircraft was being ditched. Within an hour of the last message, a RAAF Lincoln from Townsville and an ANA DC-3 from Cairns were searching an area near Hinchinbrook Island, 20 miles north of Ingham. The ambulance bearer was uninjured and got out okay, along with Capt Brampton who had some leg injuries. The stockman went down with the plane which did not float for long. Apparently Capt Dick Brampton survived for some time in the water, but was unable to stay afloat due to his injuries. He was not wearing a life jacket. The ambulance bearer was picked up six hours later by a passing coastal freighter. Neither Capt Brampton's body nor any parts of the plane were ever found.
Probable cause:
Fuel exhaustion. 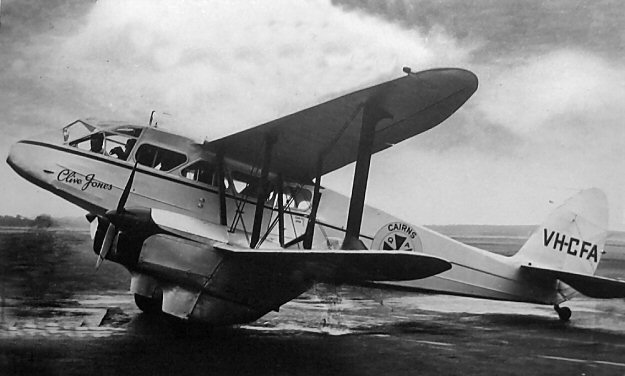 Registration:
VH-URY
Flight Phase:
Takeoff (climb)
Flight Type:
Ambulance
Survivors:
Yes
Site:
Airport (less than 10 km from airport)
Schedule:
Cheviot Hills – Charters Towers
MSN:
6082
YOM:
1934
Location:
Cheviot Hills
Queensland
Country:
Australia
Region:
Oceania
Crew on board:
1
Crew fatalities:
Pax on board:
4
Pax fatalities:
Other fatalities:
Total fatalities:
2
Circumstances:
Shortly after takeoff from Cheviot Hill Aerodrome, while climbing to a height of 50 feet, the aircraft nosed down and crashed. The pilot Captain Martin Garrett and a passegner, Mrs. Kathleen O'Leary were killed. The Doctor Mr. O'Leary was injured while two other passengers, Mrs. King Lethbridge and her child were uninjured. The aircraft was involved in an ambulance flight to Charter Towers on behalf of the Royal Flying Doctor Service.
Probable cause:
It was determined that the engine failed during initial climb. 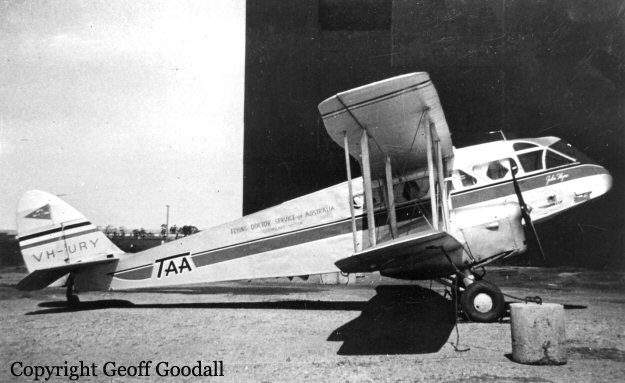 Crash of an Avro 652A Anson I in Melbourne

Registration:
VH-BNS
Flight Phase:
Takeoff (climb)
Flight Type:
Cargo
Survivors:
Yes
Site:
Airport (less than 10 km from airport)
Schedule:
Melbourne – Sydney
Location:
Melbourne-Moorabbin
Victoria
Country:
Australia
Region:
Oceania
Crew on board:
2
Crew fatalities:
Pax on board:
0
Pax fatalities:
Other fatalities:
Total fatalities:
0
Circumstances:
Shortly after takeoff from Melbourne-Moorabbin Airport, while climbing to a height of 20 feet, the right engine failed. The aircraft stalled, hit the ground past the runway end, lost its undercarriage, went through a fence and came to rest in a field. While both crew members were unhurt, the aircraft was damaged beyond repair.
Probable cause:
Failure of the right engine just after liftoff. 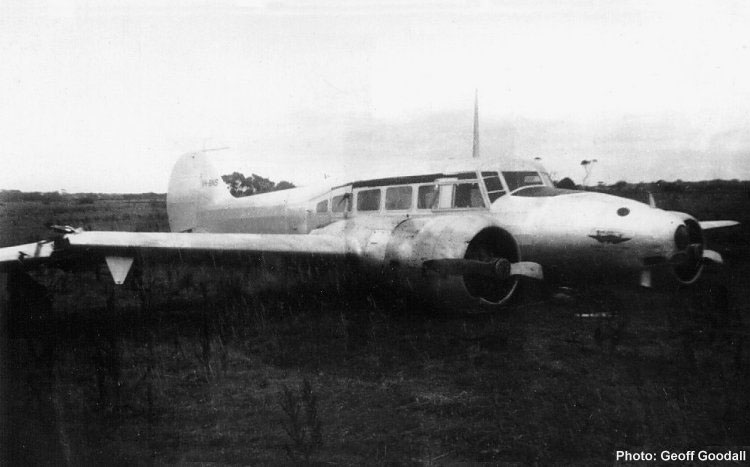 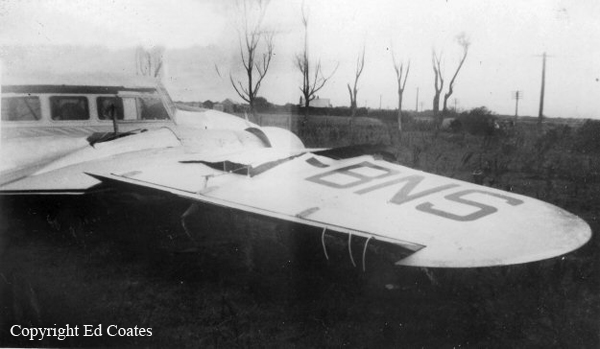 Crash of an Avro 652 Anson I in Melbourne 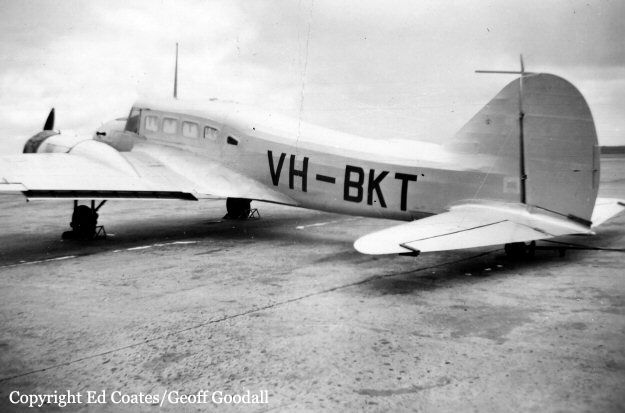 Crash of an Avro 652A Anson I in Melbourne

Registration:
VH-BKZ
Flight Phase:
Takeoff (climb)
Flight Type:
Aerial photography
Survivors:
Yes
Site:
Airport (less than 10 km from airport)
Schedule:
Melbourne - Melbourne
Location:
Melbourne-Moorabbin
Victoria
Country:
Australia
Region:
Oceania
Crew on board:
3
Crew fatalities:
Pax on board:
0
Pax fatalities:
Other fatalities:
Total fatalities:
0
Circumstances:
Shortly after takeoff, the twin engine aircraft suffered an engine failure resulting in its crossing the Centre Dandenong Road beneath the 20 feet high telephone wires which were strung along each side of the road before striking an earth embankment and two fences, tearing off the port wing. While all three crew members were slightly injured, the aircraft was damaged beyond repair.
Probable cause:
Engine failure at rotation. 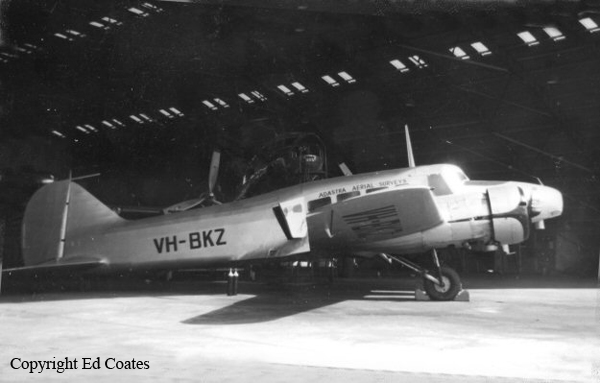 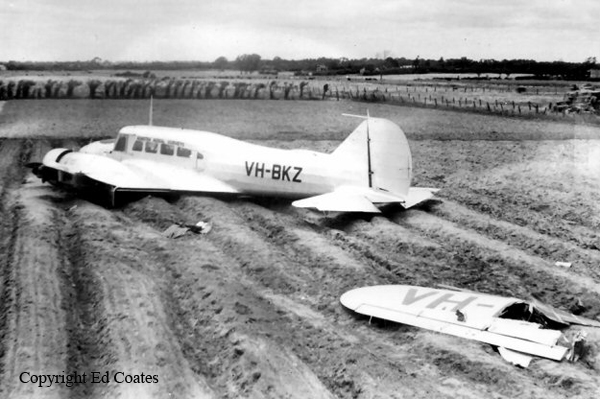 Crash of an Avro 652 Anson I in Carnamah 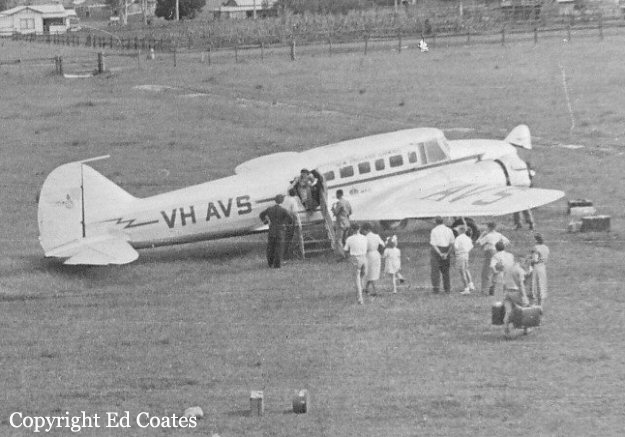