Type of aircraft:
Cessna 421C Golden Eagle III
Operator:
Bowl Aviation
Registration:
N777DX
Flight Phase:
Landing (descent or approach)
Flight Type:
Private
Survivors:
No
Site:
Mountains
Schedule:
Prince Rupert – Anchorage
MSN:
421C-0048
YOM:
1975
Location:
Sitka
Alaska
Country:
United States of America
Region:
North America
Crew on board:
1
Crew fatalities:
Pax on board:
4
Pax fatalities:
Other fatalities:
Total fatalities:
5
Captain / Total flying hours:
9200
Aircraft flight hours:
7981
Circumstances:
The pilot of the twin-engine accident airplane was on an IFR flight plan in instrument meteorological conditions when the right side nose baggage door opened. The pilot expressed concerns to air traffic control about baggage exiting the compartment and striking the right propeller. He requested a diversion to the nearest airport with an instrument approach. The flight was diverted as requested, and was cleared for a non precision instrument approach to a coastal airport adjacent to mountainous terrain. The flight was authorized to a lower altitude when established on the approach. A review of the radar track information disclosed that the pilot did not fly the published approach, but abbreviated the approach and turned the wrong direction, toward higher terrain, north of the approach course. The airplane was discovered in mountainous terrain, about 1,100 msl, and 1.5 miles north of the approach course. The crash path was initially at a shallow angle in the treetops, until the airplane struck larger trees. Post accident inspection of the airplane disclosed no evidence of any preimpact mechanical problems, other than the baggage door, which was still attached to the airplane.
Probable cause:
The pilot's failure to follow IFR procedures by not following the published approach procedures, which resulted in an in-flight collision with terrain. Factors contributing to the accident were a low ceiling, and the pressure induced by conditions/events (the open baggage door).
Final Report: 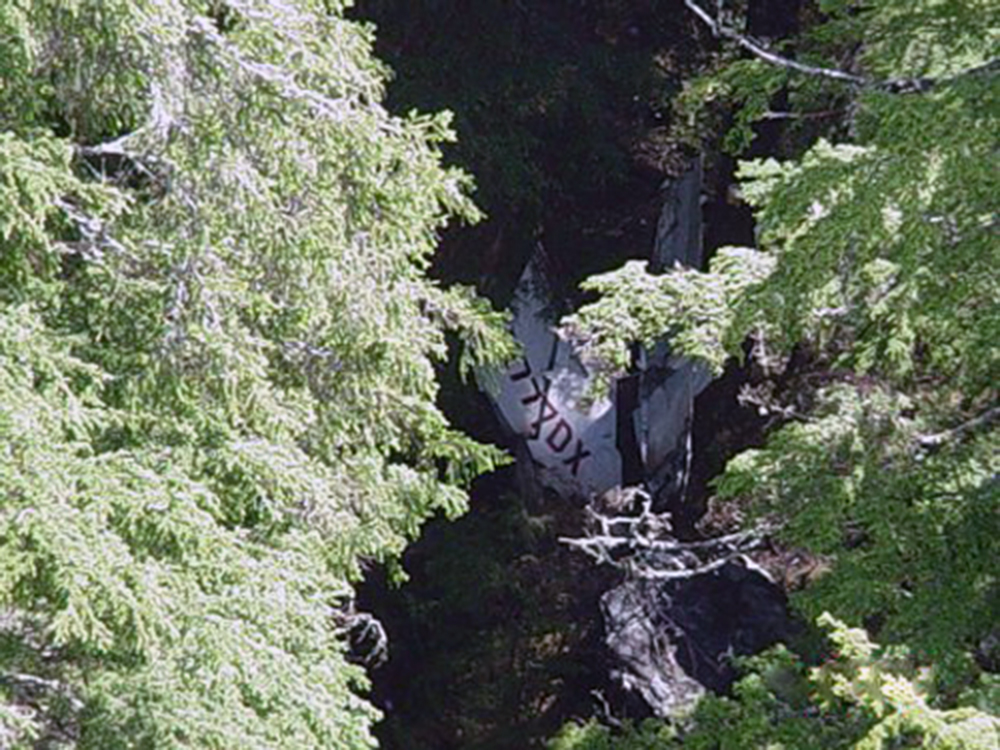 Crash of a De Havilland DHC-2 Beaver near Kincolith: 5 killed

Registration:
C-FOCJ
Flight Phase:
Landing (descent or approach)
Flight Type:
Charter/Taxi (Non Scheduled Revenue Flight)
Survivors:
No
Site:
Lake, Sea, Ocean, River
Schedule:
Prince Rupert - Kincolith
MSN:
39
YOM:
1949
Flight number:
H3709
Location:
Kincolith
British Columbia
Country:
Canada
Region:
North America
Crew on board:
1
Crew fatalities:
Pax on board:
4
Pax fatalities:
Other fatalities:
Total fatalities:
5
Captain / Total flying hours:
1700
Captain / Total hours on type:
1250.00
Aircraft flight hours:
22369
Circumstances:
The float-equipped de Havilland DHC-2 Beaver, serial number 0039, departed Prince Rupert, British Columbia, at 1719 Pacific daylight time on a visual flight rules flight to Kincolith, British Columbia, with the pilot and four passengers on board. When the aircraft arrived at Kincolith at about 1750, witnesses watched it carry out three low approaches to the water landing area, each time descending to a few feet above the water before climbing away. On the fourth approach, at about 1758, the aircraft touched down, apparently in a controlled manner, and skipped on the water surface. The floats then dug into the water followed by the right wing, which was severed from the fuselage on water impact. The aircraft quickly overturned and came to rest inverted with only the bottom of the floats visible. Several members of the village community, who had been waiting for the aircraft on the Government Dock, rushed to the sunken aircraft in small boats but were unable to rescue the pilot or passengers inside the submerged cabin. The five occupants drowned in the accident, and the aircraft was substantially damaged.
Probable cause:
On touchdown, the float(s) struck the water and caused a flying attitude that the pilot could not control before the right wing dug in and the aircraft overturned. Contributing to the accident were conflicting wind and water conditions at the time of the occurrence.
Final Report: 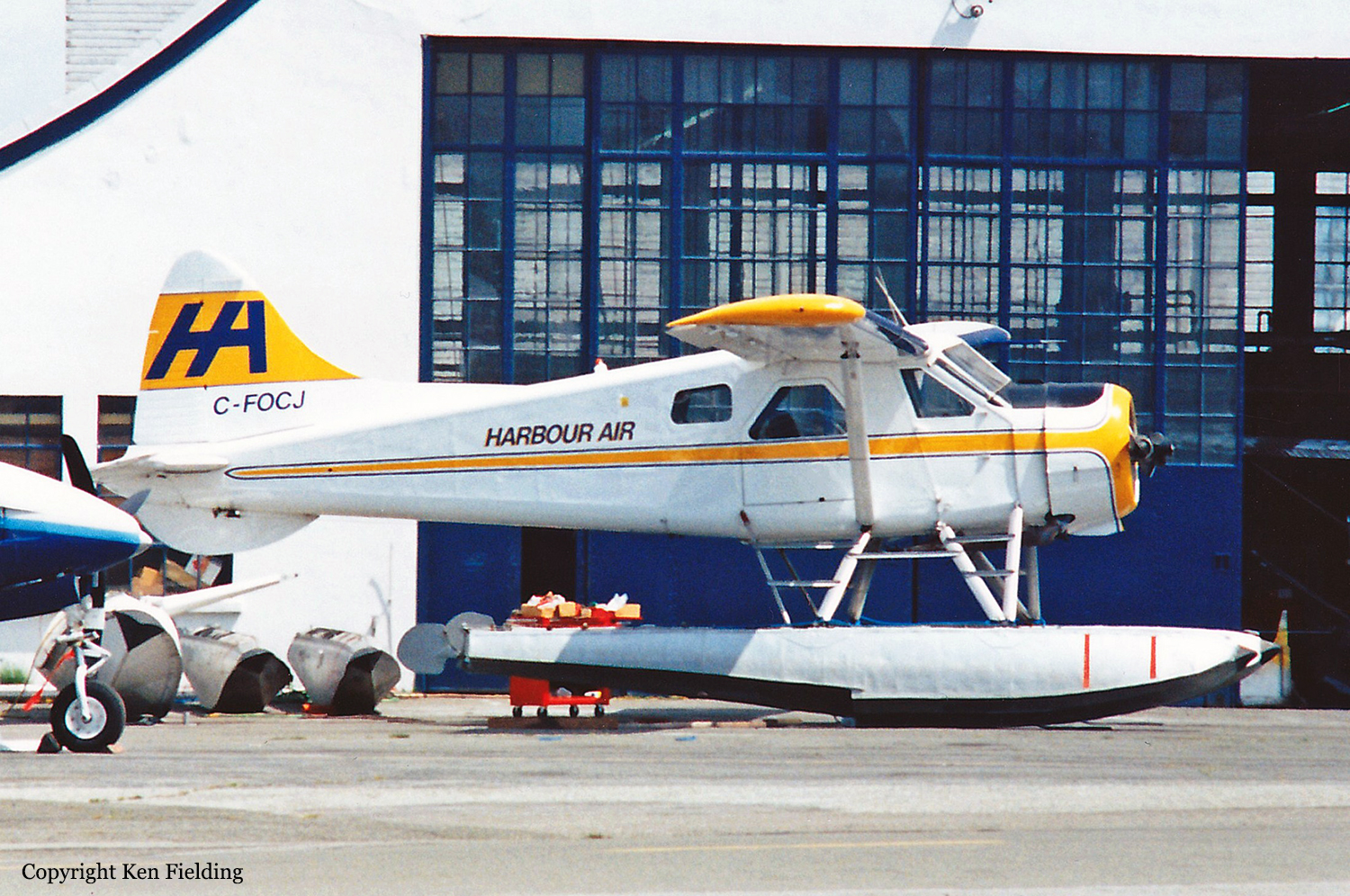 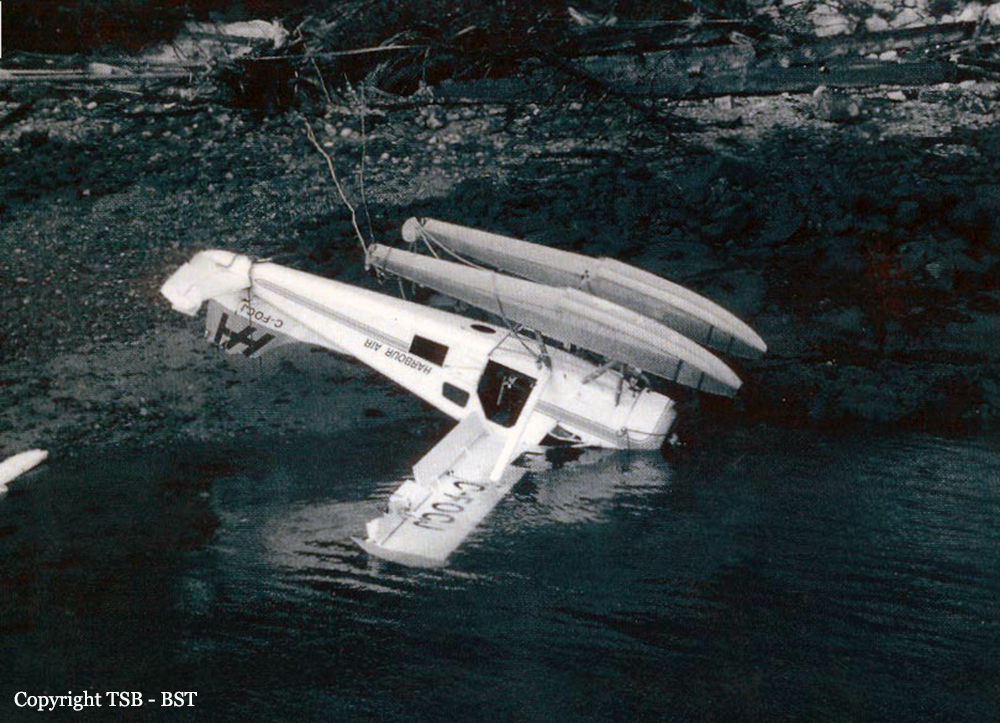 Crash of a De Havilland DHC-3 Otter near Terrace: 2 killed

Type of aircraft:
De Havilland DHC-3 Otter
Operator:
Buffalo Narrows Airways
Registration:
C-GDOB
Flight Phase:
Flight
Flight Type:
Delivery
Survivors:
No
Site:
Mountains
Schedule:
Ketchikan – Prince Rupert – Dawson Creek – Buffalo Narrows
MSN:
194
YOM:
1957
Location:
Terrace
British Columbia
Country:
Canada
Region:
North America
Crew on board:
2
Crew fatalities:
Pax on board:
0
Pax fatalities:
Other fatalities:
Total fatalities:
2
Captain / Total flying hours:
10000
Copilot / Total flying hours:
5000
Circumstances:
The single-engine, float-equipped DHC-3 Otter departed Ketchikan, Alaska, at 0905 Pacific daylight time (PDT) on 09 May 1996 with a pilot and co-pilot on board. They were on a visual flight rules (VFR) ferry flight to Dawson Creek, British Columbia, en route to Buffalo Narrows, Saskatchewan. After a refuelling stop and weather briefing at Prince Rupert, British Columbia, the aircraft departed eastbound along the published Telkwa Pass VFR route. When the aircraft did not arrive at Dawson Creek, it was reported overdue. The next day, an extensive search for the missing Otter was commenced and wreckage was located by search and rescue aircraft at 1930 PDT, 30 miles east of Terrace, in the Telkwa Pass. The aircraft had struck mountainous terrain and was destroyed. Both occupants were fatally injured.
Probable cause:
The absence of aircraft wreckage and documentation precludes an analysis of the technical aspects of this accident. This analysis, therefore, concentrates solely on the operational aspects. The high impact speed is indicative of either a loss of control followed by a rapid descent into terrain or controlled flight into unseen terrain. Given that the pilot reported encountering snow showers within 15 miles of the accident site, it is possible that the weather continued to deteriorate and may have adversely affected the pilot's ability to maintain visual contact with the terrain.
Findings:
1. The weight and centre of gravity of the aircraft at the last take-off were estimated to have been within the prescribed limits.
2. The pilot was certified, trained, and qualified for the flight in accordance with existing regulations.
3. Marginal visual weather conditions existed in the vicinity of the accident site.
4. It is possible that deteriorating weather affected the pilot's ability to maintain visual contact with the terrain.
Causes and Contributing Factors:
It was not determined why the aircraft struck terrain; however, it is likely that the contact occurred during conditions of reduced visibility.
Final Report:

Crash of a Grumman G-21A Goose in Prince Rupert: 2 killed

Registration:
C-FUMG
Flight Phase:
Takeoff (climb)
Flight Type:
Scheduled Revenue Flight
Survivors:
Yes
Site:
Airport (less than 10 km from airport)
Schedule:
Prince Rupert - Kincolith
MSN:
B145
YOM:
1945
Location:
Prince Rupert
British Columbia
Country:
Canada
Region:
North America
Crew on board:
1
Crew fatalities:
Pax on board:
4
Pax fatalities:
Other fatalities:
Total fatalities:
2
Captain / Total flying hours:
12400
Captain / Total hours on type:
1600.00
Aircraft flight hours:
22683
Circumstances:
The Grumman G21A Goose (C-FUMG) departed from the Seal Cove floatplane base at Prince Rupert, British Columbia, on a charter flight to Kincolith. The aircraft carried one pilot, four passengers, and approximately 600 pounds of baggage and freight. This was the first flight of the day for the occurrence aircraft. Prior to take-off, the pilot contacted the Prince Rupert Flight Service Station (FSS)1 by radio and obtained local traffic and weather information. The aircraft took off from the water at approximately 1141 Pacific standard time (PST)2, and proceeded southbound, following the normal departure path. During the take-off and climb, one or both of the aircraft's engines did not sound as if they were operating normally. Shortly after take-off, the pilot radioed the company dispatcher at Seal Cove and reported that he was experiencing engine problems, and that he was returning to Seal Cove and would require assistance at the ramp. After the left propeller stopped rotating, the aircraft rolled to the left and descended steeply to the ground. The aircraft crashed into trees on a hillside, at an altitude of approximately 150 feet, approximately three nautical miles (nm)3 south of Seal Cove. The pilot and one passenger were fatally injured; the three other passengers received serious injuries. A search started approximately 45 minutes after the aircraft departed. The aircraft was discovered by a Coast Guard helicopter, which was able to rescue the survivors. The accident occurred during daylight hours at about 1145 PST, at latitude 54·17'N and longitude 134·14'W.
Probable cause:
The pilot encountered engine problems during the take-off and climb, and, after the left propeller was feathered, lost directional control of the aircraft. The aircraft rolled to the left, descended rapidly, and crashed to the ground.
Final Report:

Crash of a Swearingen SA227AC Metro III in Terrace: 7 killed

Type of aircraft:
Swearingen SA227 Metro III
Operator:
Skylink Airlines
Registration:
C-GSLB
Flight Phase:
Landing (descent or approach)
Flight Type:
Scheduled Revenue Flight
Survivors:
No
Site:
Airport (less than 10 km from airport)
Schedule:
Prince Rupert - Terrace
MSN:
AC-481
YOM:
1981
Flight number:
SLK070
Location:
Terrace
British Columbia
Country:
Canada
Region:
North America
Crew on board:
2
Crew fatalities:
Pax on board:
5
Pax fatalities:
Other fatalities:
Total fatalities:
7
Aircraft flight hours:
11177
Circumstances:
A Swearingen SA227-AC Metro III passenger plane, operating as Skylink Flight 070 was destroyed in accident at Terrace Airport, BC (YXT), Canada. All five passengers and two crew members were killed. Flight 070 took off from Vancouver, BC (YVR) at 06:51 on a scheduled domestic flight to Terrace, BC. At 08:20 Flight 070 was cleared for an approach at Terrace. At 08:27, at an altitude of 1,200 feet asl and just prior to reaching the published missed approach point (MAP), the captain stated "OK, I got the button here." Fourteen seconds after this, the captain saw the button of runway 27. At approximately this same time, the aircraft was observed on what corresponded to a downwind leg for runway 15 at about 500 feet above ground level (agl), flying straight and level over the threshold of runway 27, with the landing gear down. The aircraft crossed the localizer transmitter at an altitude of 1,100 feet asl and at an airspeed of 140 knots. Approximately 30 seconds after crossing the localizer transmitter, the aircraft commenced a descent out of 1,100 feet, and the flaps were lowered to the full position. The aircraft then levelled at an altitude of approximately 900 feet. At or about this same time, the aircraft was observed on base leg for runway 15 at a low altitude, close to the east/west ridge located about 1.5 miles north of the airport. Twenty-six seconds after full flap was selected, a missed approach was initiated, and the landing gear and flaps were selected up. Within five seconds of the initiation of the missed approach, the aircraft began to accelerate and a rate of climb of approximately 1,200 feet per minute was established. This rate of climb quickly diminished to zero, followed by the start of a descent which quickly increased to 3,000 feet per minute. As the aircraft descended, the co-pilot called "descending" twice. A few seconds later, the aircraft struck trees on the west side of runway 15 just inside the airport perimeter. A second and final impact with the ground occurred just outside the airport perimeter approximately 800 feet from the initial tree strike. A fire erupted following the ground impact.
Probable cause:
The crew continued with the approach beyond the missed approach point without establishing the required visual references. The evidence indicates that, while subsequently carrying out a missed approach in IFR conditions, the aircraft was flown into the ground in a manner consistent with disorientation. Contributing to the occurrence were the inadequacy of the company's operating procedures, the reduced operating standards, and the inadequate definition of the visual references required for a circling approach.

Registration:
N5323G
Flight Phase:
Flight
Flight Type:
Delivery
Survivors:
Yes
Site:
Lake, Sea, Ocean, River
Schedule:
Phoenix – Port Hardy – Prince Rupert – Gustavus
MSN:
91
YOM:
1956
Location:
Grenville Channel
British Columbia
Country:
Canada
Region:
North America
Crew on board:
2
Crew fatalities:
Pax on board:
0
Pax fatalities:
Other fatalities:
Total fatalities:
0
Circumstances:
The aircraft was on its way from Phoenix to Gustavus, AK, to be delivered to its new operator Glacier Bay Airways. On the leg from Port Hardy to Prince Rupert, while cruising at an altitude of 4,000 feet, the engine exploded and oil spread on the windscreen. The crew ditched the aircraft in the Grenville Channel and was quickly rescued. The aircraft sank and was not recovered.
Probable cause:
Engine explosion for unknown reasons. 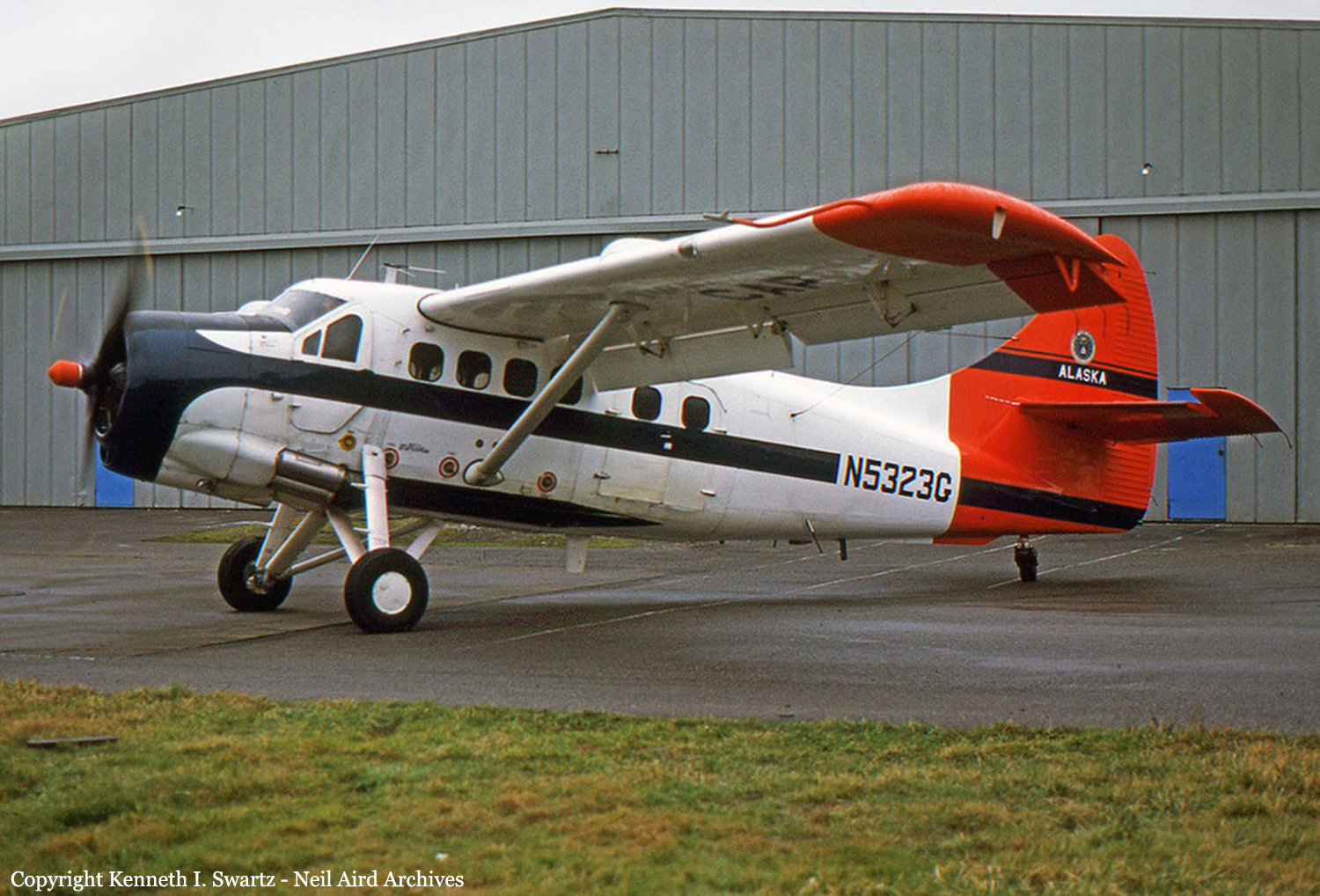 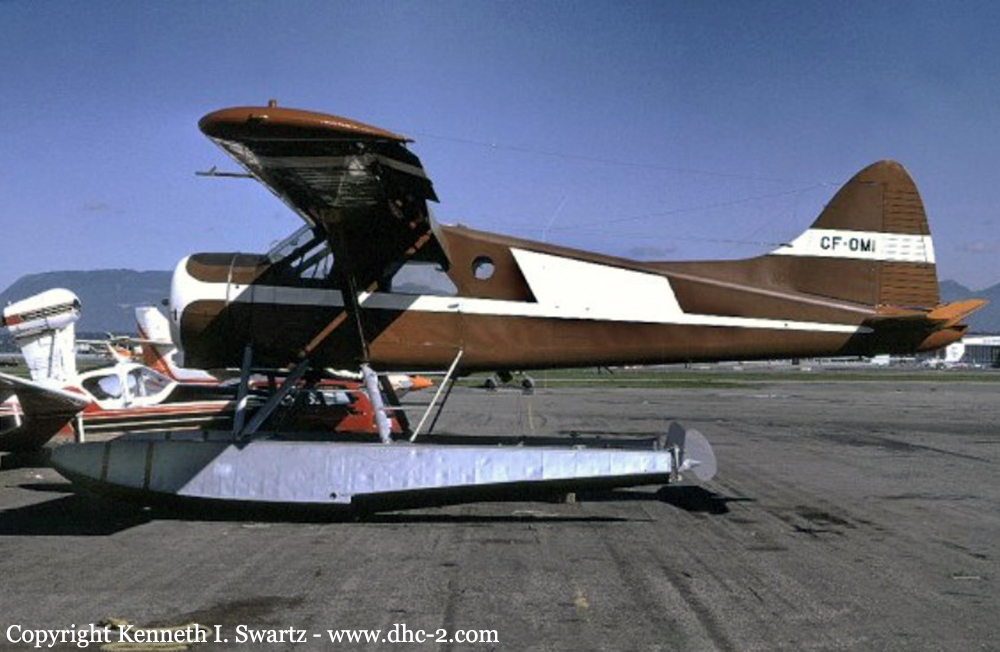 Crash of a Grumman G-21A Goose in Prince Rupert: 7 killed

Crash of a Grumman G-73 Mallard in Prince Rupert: 3 killed