Crash of a Rockwell 690B Turbo Commander in New Haven: 4 killed

Type of aircraft:
Rockwell Grand Commander 690
Operator:
Ellumax Leasing
Registration:
N13622
Flight Phase:
Landing (descent or approach)
Flight Type:
Private
Survivors:
No
Site:
City
Schedule:
Teterboro - New Haven
MSN:
11469
YOM:
1978
Location:
New Haven
Connecticut
Country:
United States of America
Region:
North America
Crew on board:
1
Crew fatalities:
Pax on board:
1
Pax fatalities:
Other fatalities:
Total fatalities:
4
Captain / Total flying hours:
2067
Aircraft flight hours:
8827
Circumstances:
The pilot was attempting a circling approach with a strong gusty tailwind. Radar data and an air traffic controller confirmed that the airplane was circling at or below the minimum descent altitude of 720 feet (708 feet above ground level [agl]) while flying in and out of an overcast ceiling that was varying between 600 feet and 1,100 feet agl. The airplane was flying at 100 knots and was close to the runway threshold on the left downwind leg of the airport traffic pattern, which would have required a 180-degree turn with a 45-degree or greater bank to align with the runway. Assuming a consistent bank of 45 degrees, and a stall speed of 88 to 94 knots, the airplane would have been near stall during that bank. If the bank was increased due to the tailwind, the stall speed would have increased above 100 knots. Additionally, witnesses saw the airplane descend out of the clouds in a nose-down attitude. Thus, it was likely the pilot encountered an aerodynamic stall as he was banking sharply, while flying in and out of clouds, trying to align the airplane with the runway. Toxicological testing revealed the presence of zolpidem, which is a sleep aid marketed under the brand name Ambien; however, the levels were well below the therapeutic range and consistent with the pilot taking the medication the evening before the accident. Therefore, the pilot was not impaired due to the zolpidem. Examination of the wreckage did not reveal any preimpact mechanical malfunctions.
Probable cause:
The pilot's failure to maintain airspeed while banking aggressively in and out of clouds for landing in gusty tailwind conditions, which resulted in an aerodynamic stall and uncontrolled descent.
Final Report: 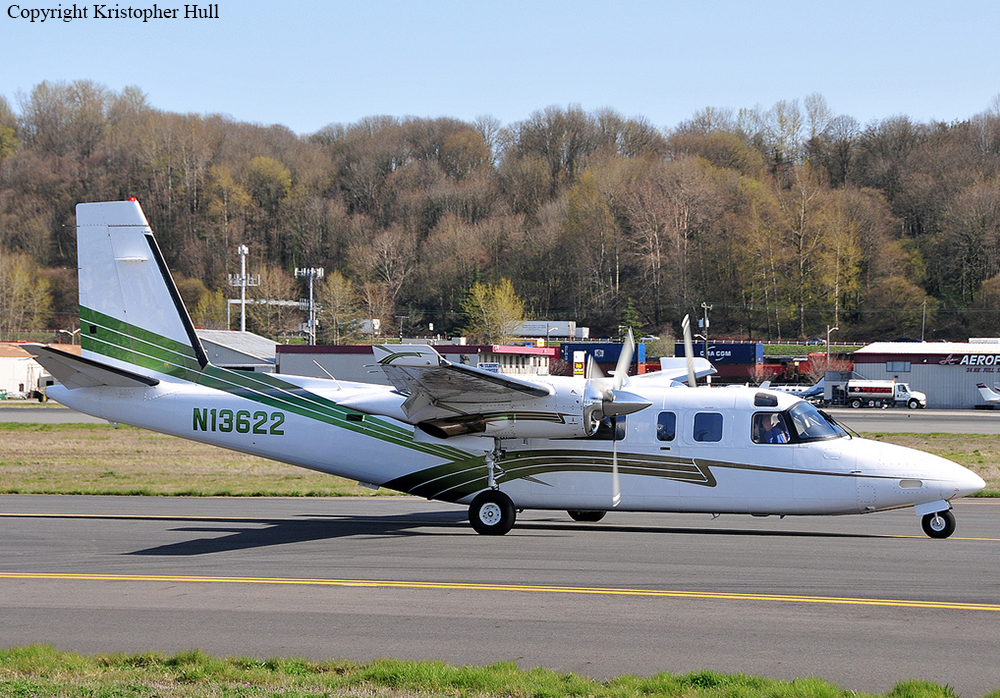 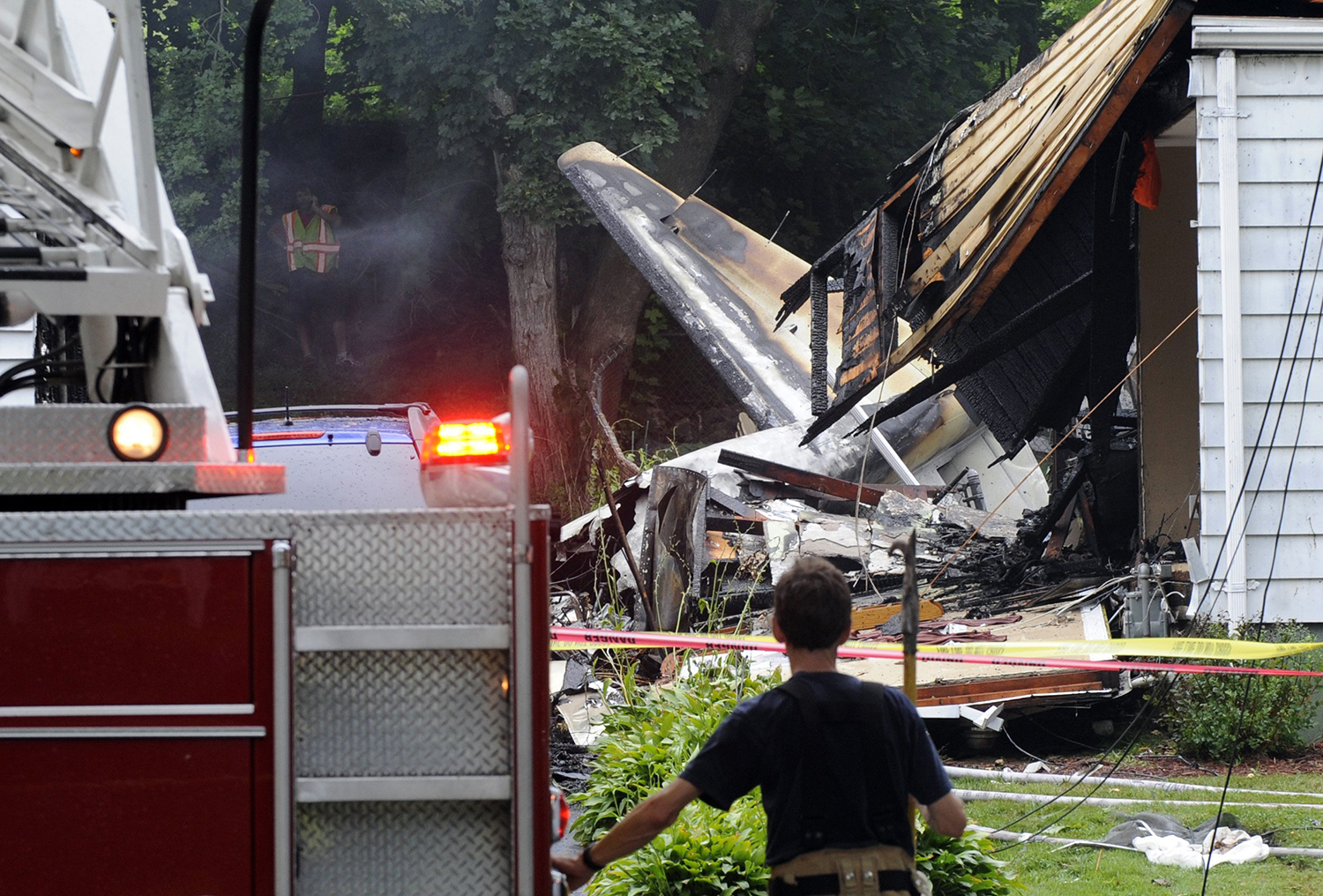 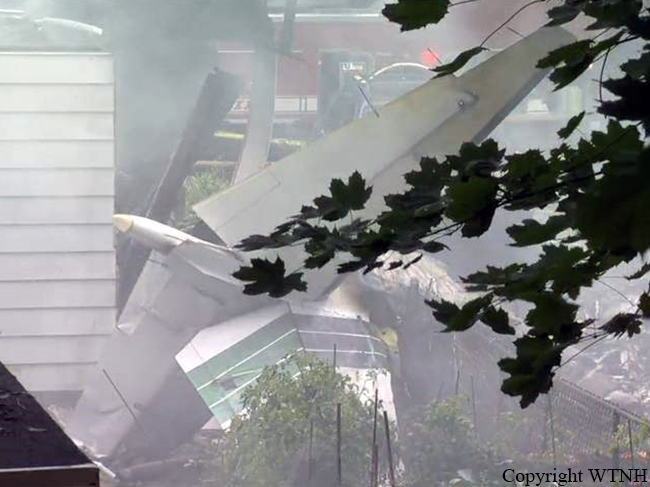 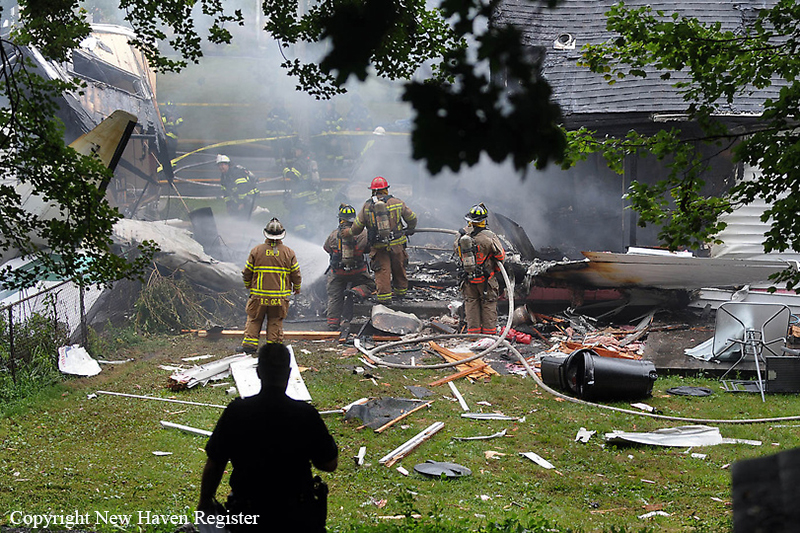 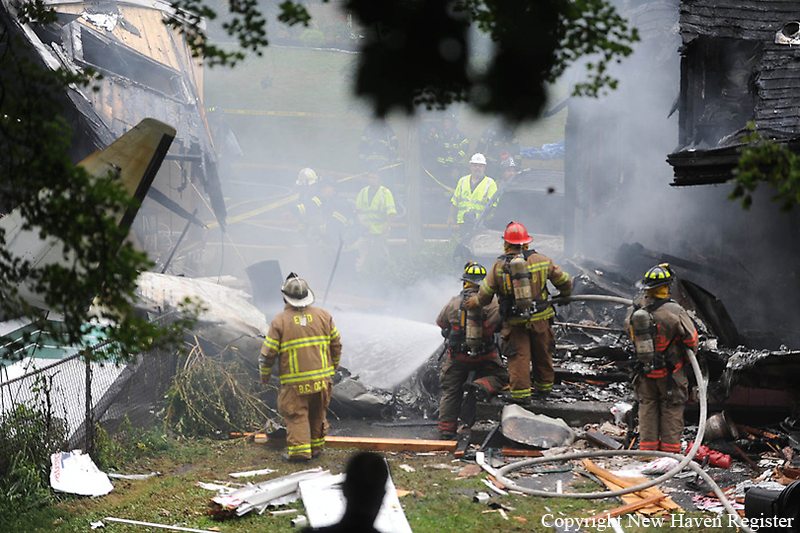 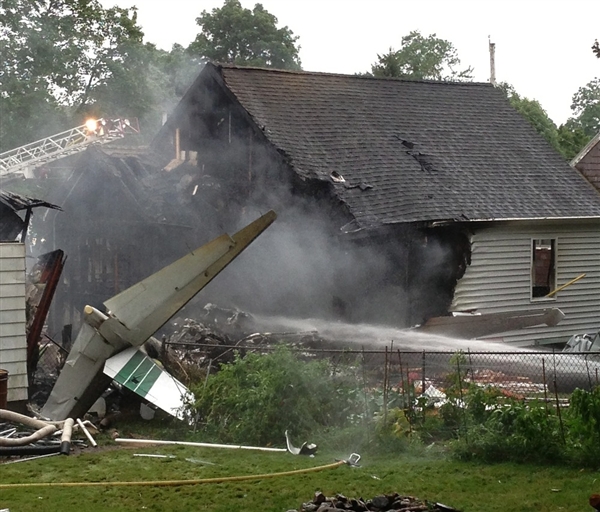 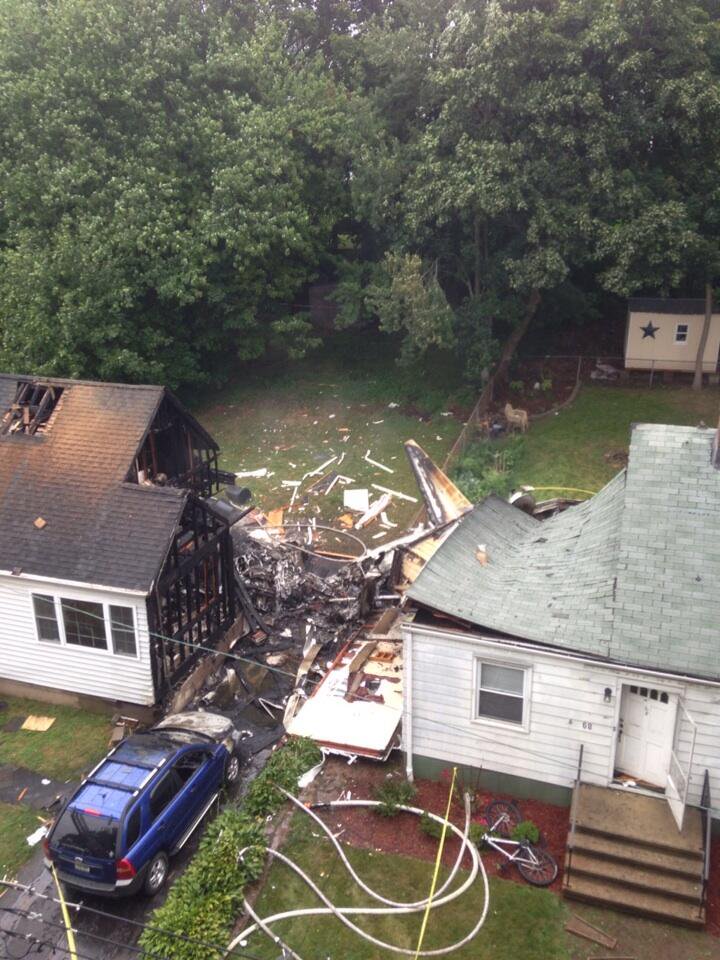 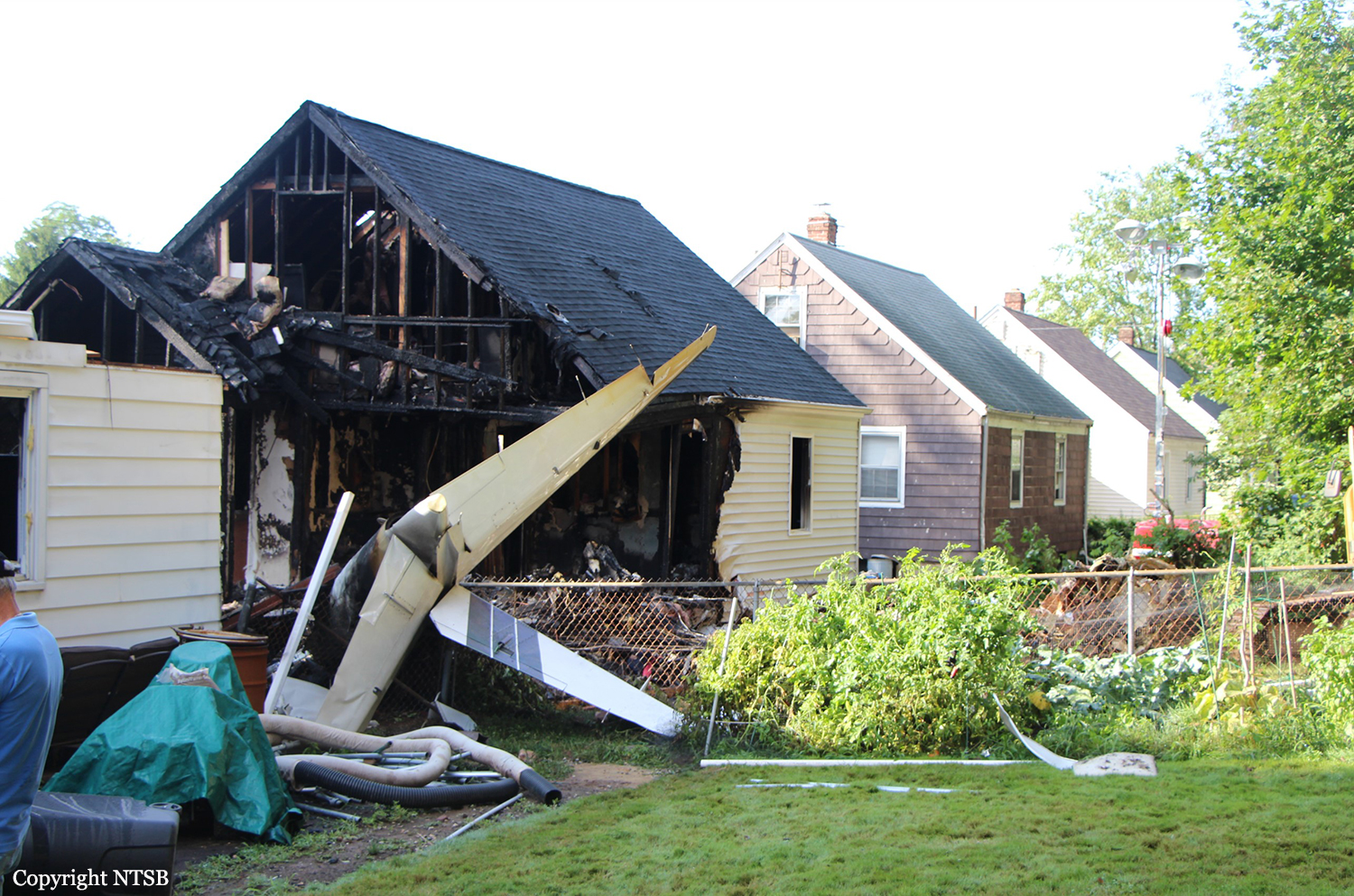 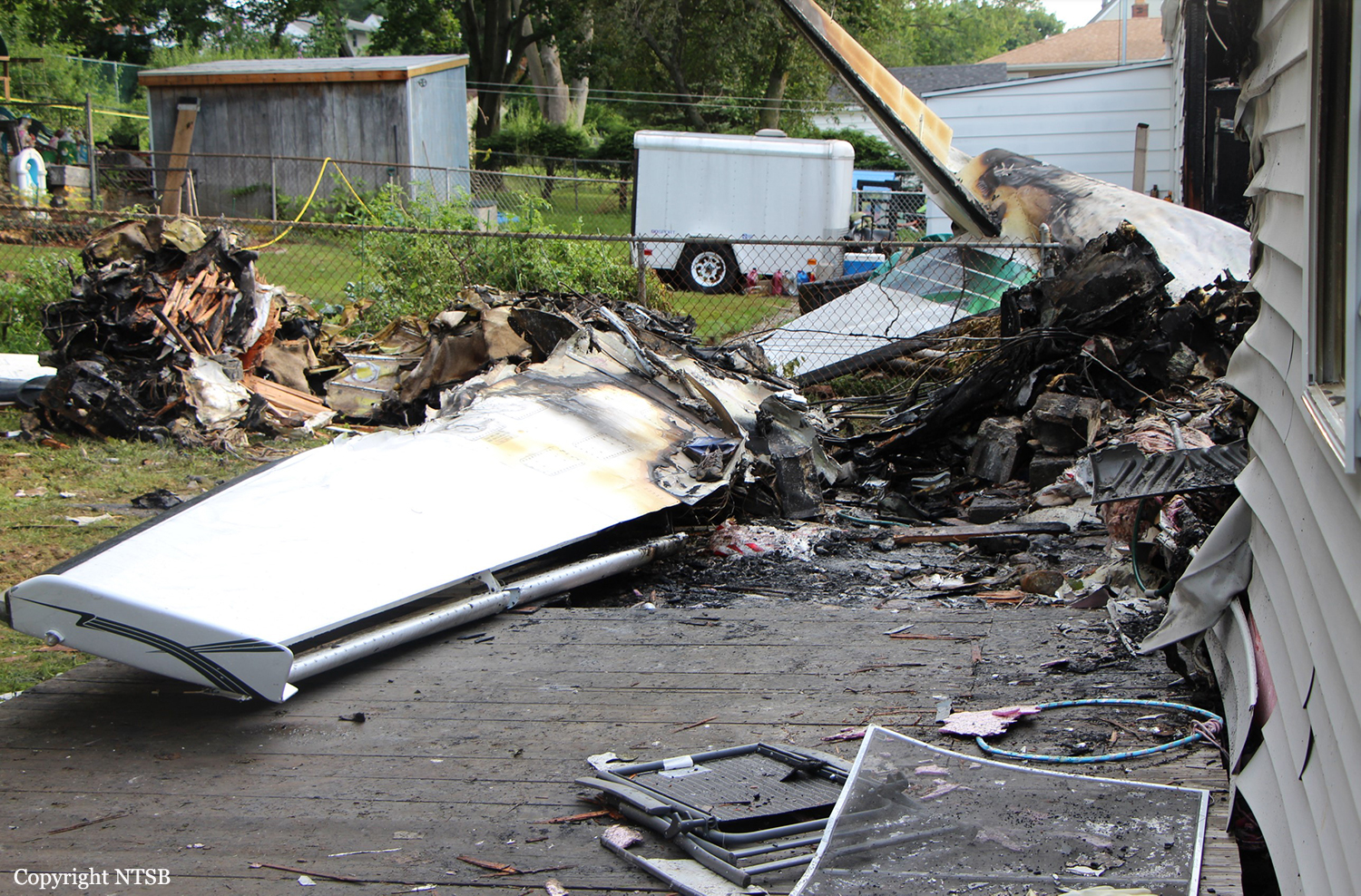 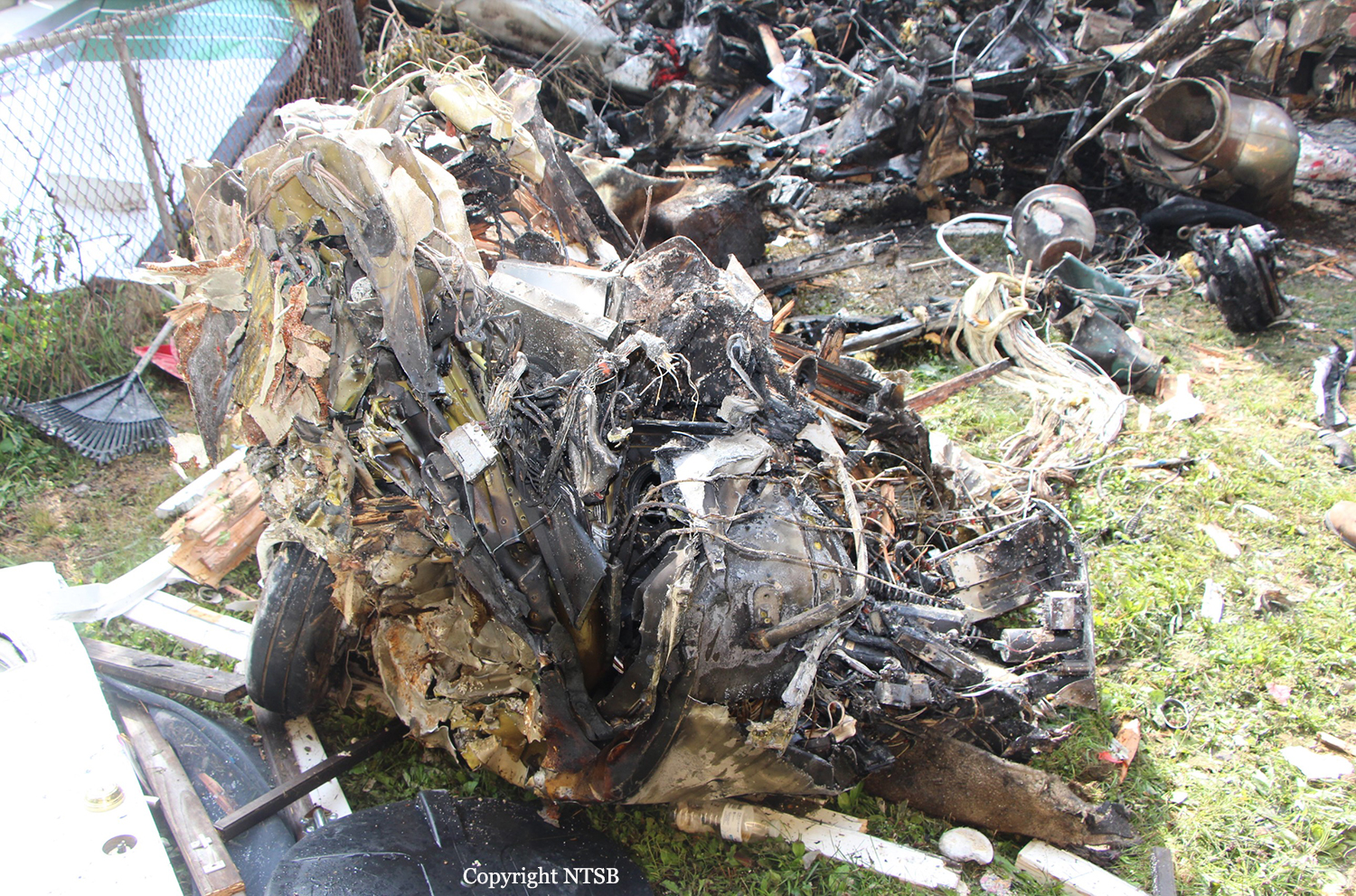 Crash of a Beechcraft 99 Airliner in Groton 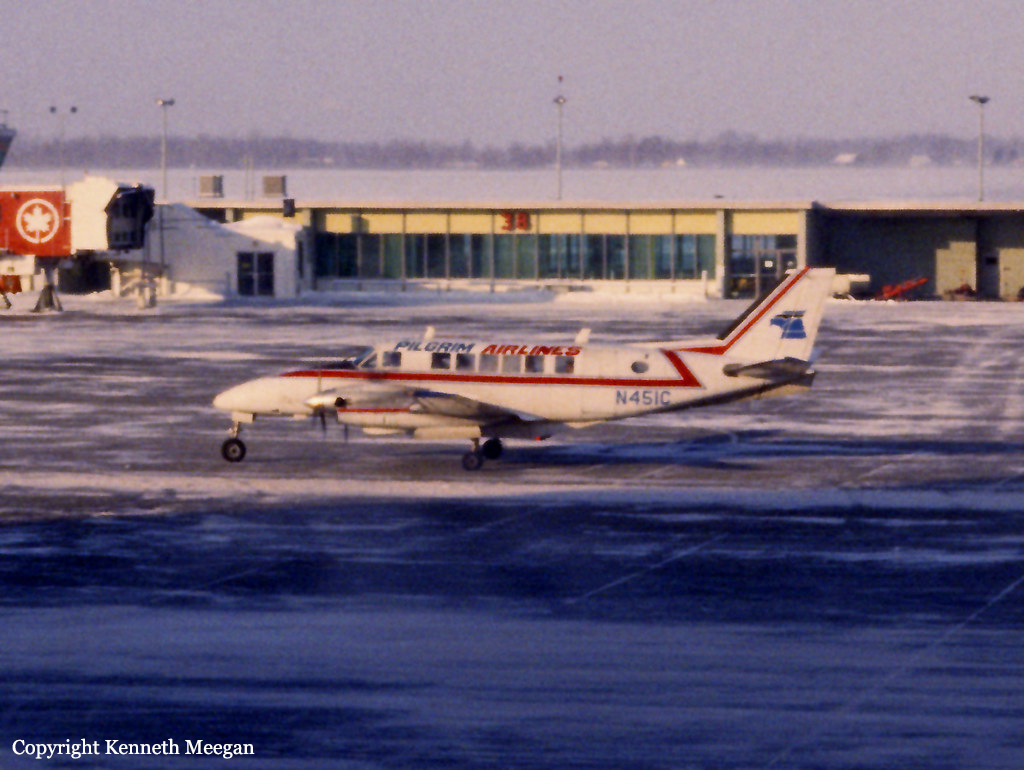 Crash of a Cessna 421B Golden Eagle II off Muskegon: 5 killed

Registration:
N5832
Flight Phase:
Landing (descent or approach)
Flight Type:
Scheduled Revenue Flight
Survivors:
Yes
Site:
Airport (less than 10 km from airport)
Schedule:
Washington DC – Groton – New London – New Haven – Philadelphie – Newport News
MSN:
384
YOM:
1967
Flight number:
AL485
Location:
New Haven
Connecticut
Country:
United States of America
Region:
North America
Crew on board:
3
Crew fatalities:
Pax on board:
28
Pax fatalities:
Other fatalities:
Total fatalities:
28
Captain / Total flying hours:
12107
Captain / Total hours on type:
3600.00
Copilot / Total flying hours:
4150
Copilot / Total hours on type:
2400
Aircraft flight hours:
33058
Circumstances:
During a non precision approach to New Haven-Tweed Airport, the crew encountered poor weather conditions with rain falls. On final, the pilot-in-command passed below the glide slope and continued the approach until the airplane struck cottages and crashed in flames 4,890 feet short of runway 02. Three occupants survived while 28 others were killed.
Probable cause:
The captain's intentional descent below the prescribed minimum descent altitude under adverse weather conditions without adequate forward visibility or the crew's sighting of the runway environment. The captain disregarded advisories from his first officer that minimum descent altitude had been reached and that the airplane was continuing to descend at a normal descent rate and airspeed. The Board was unable to determine what motivated the captain to disregard prescribed operating procedures and altitude restrictions and finds it difficult to reconcile the actions he exhibited during the conduct of this flight.
Final Report: 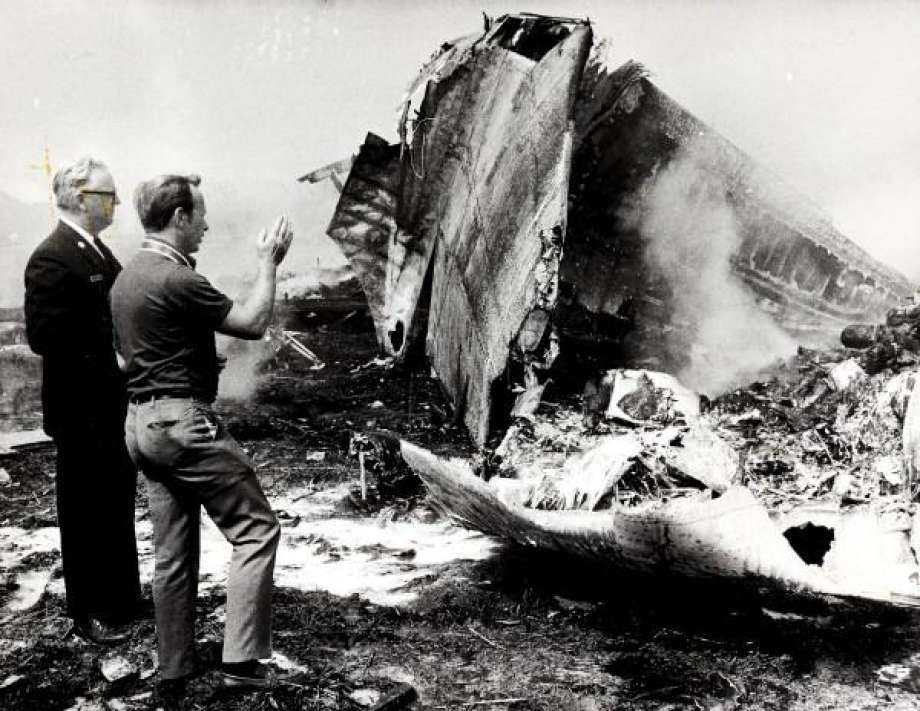 Crash of a Stinson SR-7C Reliant in New Haven: 4 killed

Registration:
N94213
Flight Phase:
Takeoff (climb)
Flight Type:
Scheduled Revenue Flight
Survivors:
Yes
Site:
Airport (less than 10 km from airport)
Schedule:
Boston – New Haven – Bridgeport – New York
MSN:
23
YOM:
1948
Flight number:
AA535
Location:
New Haven
Connecticut
Country:
United States of America
Region:
North America
Crew on board:
3
Crew fatalities:
Pax on board:
5
Pax fatalities:
Other fatalities:
Total fatalities:
0
Captain / Total flying hours:
7453
Captain / Total hours on type:
4660.00
Copilot / Total flying hours:
5300
Copilot / Total hours on type:
3205
Aircraft flight hours:
20857
Circumstances:
This was scheduled passenger flight 535 of March 1 from Boston, Massachusetts, to New York, New York, with stops planned at New Haven and Bridgeport, Connecticut. The crew, consisting of Captain Edward W. Johnson, First Officer Norman A. Paquette, and Stewardess Marian Sullivan, reported to company operations at Boston well ahead of scheduled departure time. Departure from Boston at 0927 was on time and was in accordance with an TFR clearance to cruise at 6,000 feet via airways to New Haven. The flight was routine and on schedule to New Haven. The aircraft was not refueled during the five-minute stop at New Haven, during which time both engines were stopped. The flight departed the terminal with five passengers and 1460 gallons of fuel. Gross weight of the aircraft was well under the maximum allowable and its center of gravity was located within prescribed limits. The wind was calm and runway 14 (4,116 feet), one of two macadam runways, was selected for takeoff. There is no air traffic control tower at New Haven. After completion of the takeoff checklist, the aircraft moved onto the runway and takeoff was initiated from a tan start without delay. This segment of the flight was being flown by First Officer Paquette who occupied the right seat. Captain Johnson, on the left, maintained directional control during the initial acceleration of the aircraft. Before the aircraft reached the intersection of runways 14 and 19, the landing gear was retracted. The aircraft then skidded clown runway 14 near its center and cane to rest 1,050 feet from the far end. Captain Johnson, Stewardess Sullivan, and three passengers left through the right emergency escape hatch over the wing. First Officer Paquette and the two remaining passengers left through the partially opened front entrance door. Fire, around the left engine and the left outboard wing area, caused considerable damage and was extinguished by the local fire department.
Probable cause:
The Board determines that the probable cause of this accident was the improper technique of the captain resulting in the unintentional retraction of the landing gear prior to V 1 speed, which was made possible by a malfunctioning left gear safety switch. A contributing factor was inadequate inspection by the carrier. The following findings were reported:
- The first officer made the takeoff with the captain performing the duties of copilot from his left seat,
- The aircraft operated normally up to 85 knots in the takeoff roll,
- The captain prematurely applied upward pressure on the landing gear selector handle,
- A defective landing gear safety switch allowed the landing gear selector handle to be unlocked during ground operation of the aircraft, and permitted the landing gear to retract,
- Fire did not develop in the left nacelle and fuel tank area until the aircraft skidded to a stop on the runway,
- The company’s inspection of the safety switch was inadequate.
Final Report:

Type of aircraft:
Douglas C-47 Skytrain (DC-3)
Operator:
Seattle Air Charter
Registration:
NC79025
Flight Phase:
Takeoff (climb)
Flight Type:
Charter/Taxi (Non Scheduled Revenue Flight)
Survivors:
Yes
Site:
Airport (less than 10 km from airport)
Schedule:
Seattle – New Haven
MSN:
10181
YOM:
1943
Location:
Seattle
Washington
Country:
United States of America
Region:
North America
Crew on board:
3
Crew fatalities:
Pax on board:
27
Pax fatalities:
Other fatalities:
Total fatalities:
14
Captain / Total flying hours:
6000
Captain / Total hours on type:
3000.00
Copilot / Total flying hours:
3000
Aircraft flight hours:
5419
Circumstances:
A group of Yale University students returning to school following their Christmas vacation arranged with William F. Leland, sole owner and operator of Seattle Air Charter, to transport them front Seattle to New Haven, Connecticut, January 2, 1949. Departure was delayed because a full crew was not available at 1800 as had been originally planned. At approximately 2100 a crew was organized, consisting of G. W. Chavers, pilot; K.A. Love, copilot; and W. F. Leland, third crew member. The flight taxied to Runway 13 for takeoff at 2138 and held because ground fog conditions restricted the visibility below the one mile minimum required for takeoff. The flight maintained radio contact with the control tower which advised the pilots of the existing weather conditions on the field. When the flight had taxied from the parking ramp, the tower reported, “Boeing Field weather is clear, visibility, 1/2 variable to 1/4 mile in all quadrants.” The flight asked if they could take off. The tower replied: “Roger. We will let you out as far as traffic is concerned. You are cleared into position to holds.” A few minutes later, at 2145, the flight requested their weather minimums for takeoff and were told that they were ceiling 300 feet, and visibility one mile. To this, the flight responded, “If we take off we will be in violation, won’t we?” The tower answered, “Yes.” Shortly after this conversation, the tower again reported the visibility which was at that time restricted to 1/8 mile. After a period of 10 minutes during which time the flight continued to hold at the end of the runway, the tower remarked: “It appears we are getting a little break. Cleared into position and hold. We will have a clearance for you shortly.” Immediately following, the flight’s air route traffic control clearance was transmitted. Then, at 2201, the crew stated that they could see the four green range lights at the end of the runway, and that they were going to take off. These lights are located 5,700 feet from the approach end of runway 13, which is 7,500 feet in length. At 2204 the tower stated, “Cleared for take off report on top.” At this time the weather as reported by the Weather Bureau was ceiling unlimited, thin obscurement, visibility one fourth of a mile, restricted by fog. The airplane began its take off to the south, and for approximately 1,000 feet it appeared normal to observers who could see the navigation lights of the airplane. It then began to swerve to the left, becoming airborne approximately 1,800 feet down the runway on a heading 35 degrees to the left of the runway. Shortly after leaving the runway, the left wing dropped and the tip dragged on the ground for a distance of 117 feet. The aircraft remained airborne for approximately 750 feet after leaving the runway, and then made contact with the ground in a landing attitude, tail wheel first. Upon contact with the ground, power to the engines was “cut”. The aircraft rolled or skidded the remaining distance, approximately 700 feet, into a revetment hangar, immediately after which it was enveloped in flames. Fourteen occupants, among them all three crew members, were killed while 16 others were injured. The aircraft was destroyed.

As the tower watched the airplane’s navigation lights, they realized that a crash was imminent and called the Boeing Field Fire Department which was located 1,300 feet south of the control tower, and 200 feet south of the revetment hangar into which the airplane crashed. The fire captain on duty heard the crash. He and 2 firemen, which comprised the duty crew that night, responded immediately, departing for the scene of the crash with all available equipment. This comprised a crash wagon and 2 pump trucks. The equipment arrived within a minute after the crash.
Probable cause:
The Board determines that the probable cause of this accident was the attempt to take off in an airplane which had formations of ice and frost on the surfaces of the wings.
The following factors were reported:
- At the time of takeoff ice covered the bottom surfaces of both wings, and patches of ice and frost were on the top surface of the left wing,
- The left wing tip dragged the ground for a distance of 117 feet and the aircraft remained airborne for a distance of approximately 750 feet after which it made contact with the ground in a landing attitude,
- Power to both engines was cut after the airplane touched the ground. It then crashed into a revetment hangar, and was immediately enveloped in flames,
- No indication of any mechanical or structural failure in the aircraft or any of its components was found.
Final Report:
Subscribe to New Haven