Registration:
AP-BLD
Flight Phase:
Landing (descent or approach)
Flight Type:
Scheduled Revenue Flight
Survivors:
Yes
Site:
City
Schedule:
Lahore - Karachi
MSN:
2274
YOM:
2004
Flight number:
PK8303
Location:
Karachi-Muhammad Ali Jinnah-Quaid-e-Azam
Sindh (سنڌ سندھ)
Country:
Pakistan
Region:
Asia
Crew on board:
8
Crew fatalities:
Pax on board:
91
Pax fatalities:
Other fatalities:
Total fatalities:
98
Aircraft flight hours:
47124
Aircraft flight cycles:
25866
Circumstances:
On 22 May 2020 at 13:05 hrs PST, the Pakistan International Airlines aircraft Airbus A320-214, registration number AP-BLD, took off from Lahore (Allama Iqbal International Airport – AIIAP) Pakistan to perform a regular commercial passenger flight (PK8303) to Karachi (Jinnah International Airport – JIAP) Pakistan, with 8 crew members (01 Captain, 01 First Officer, and 06 flight attendants) and 91 passengers on board. At 14:35 hrs the aircraft performed an ILS approach for runway 25L and touched down without landing gears, resting on the engines. Both engines scrubbed the runway at high speed. Flight crew initiated a go-around and informed “Karachi Approach” that they intend to make a second approach. About four minutes later, during downwind leg, at an altitude of around 2000 ft, flight crew declared an emergency and stated that both engines had failed. The aircraft started losing altitude. It crashed in a populated area, short of runway 25L by about 1340 meters. An immediate subsequent post impact fire initiated. Out of 99 souls on-board, 97 were fatally injured and 02 passengers survived. On ground 04 persons were injured however 01 out of these reportedly expired later at a hospital.

Below, the preliminary report published by the Pakistan AAIB. 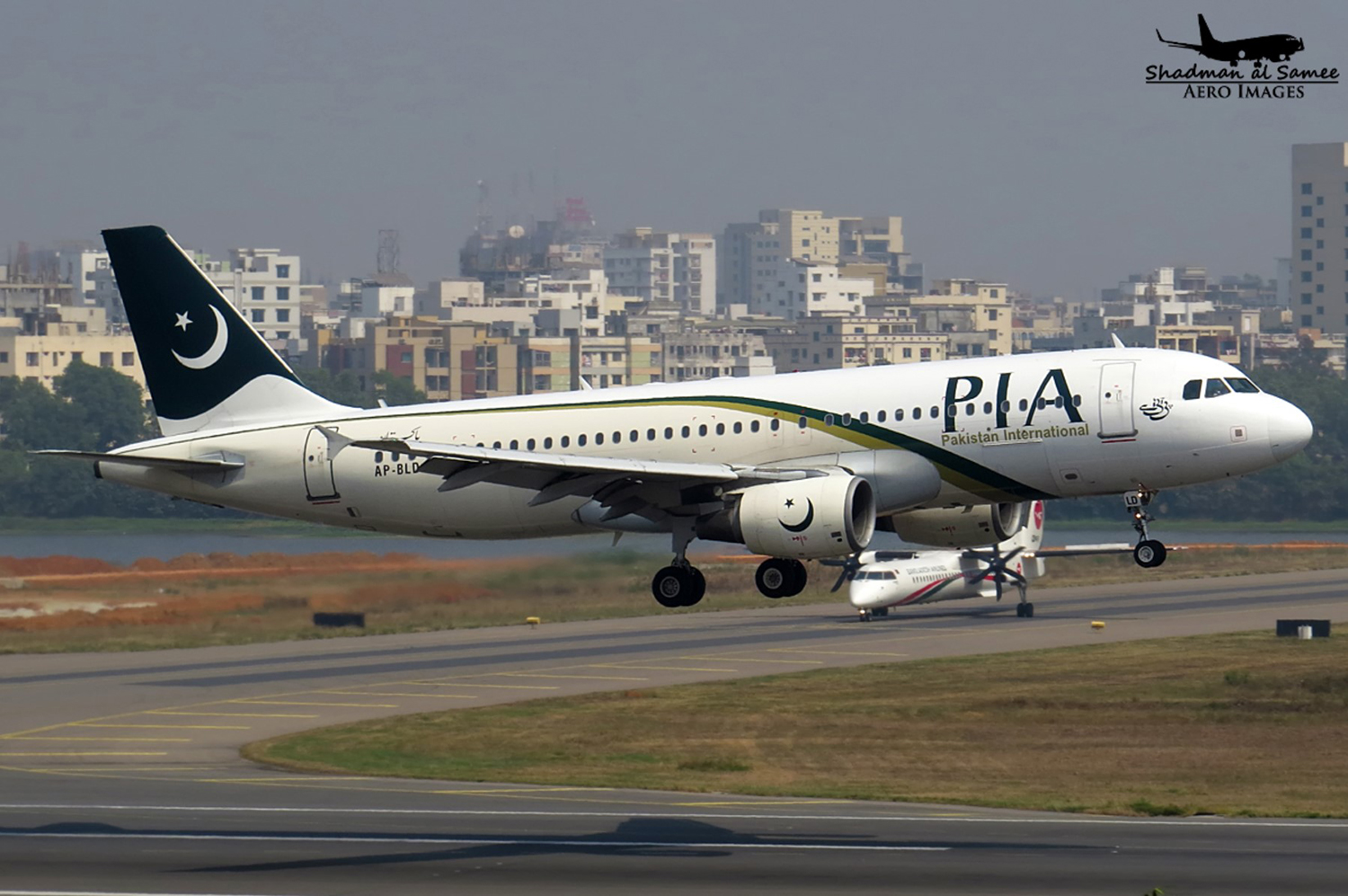 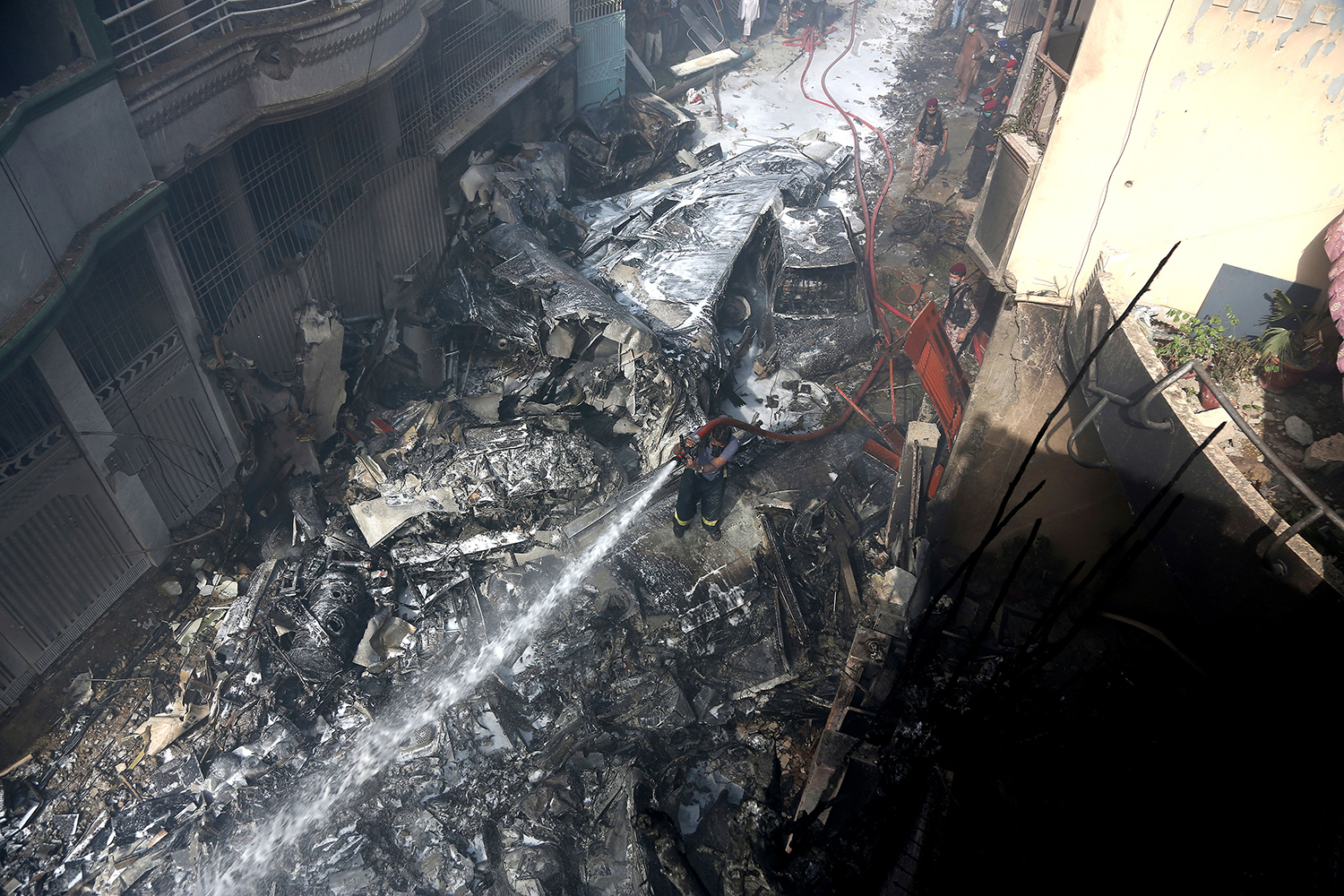 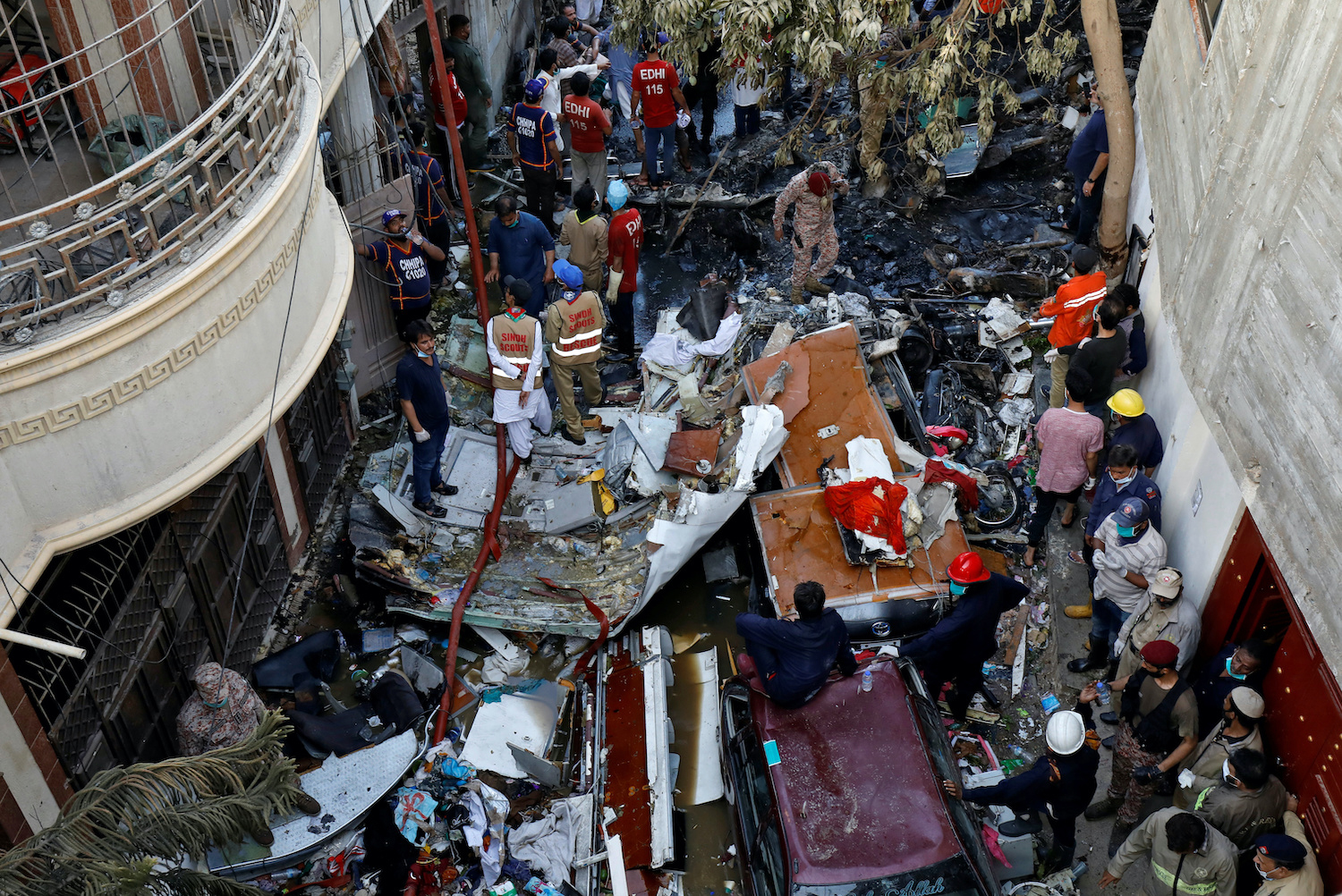 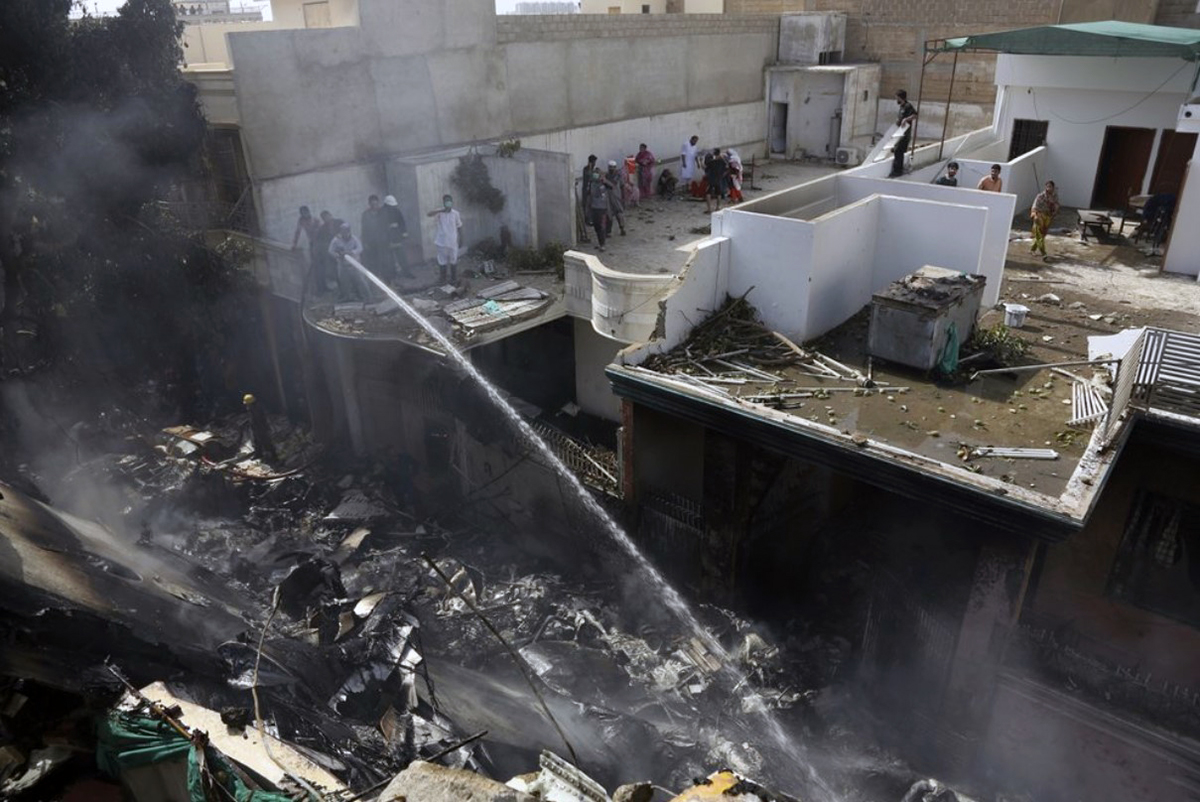 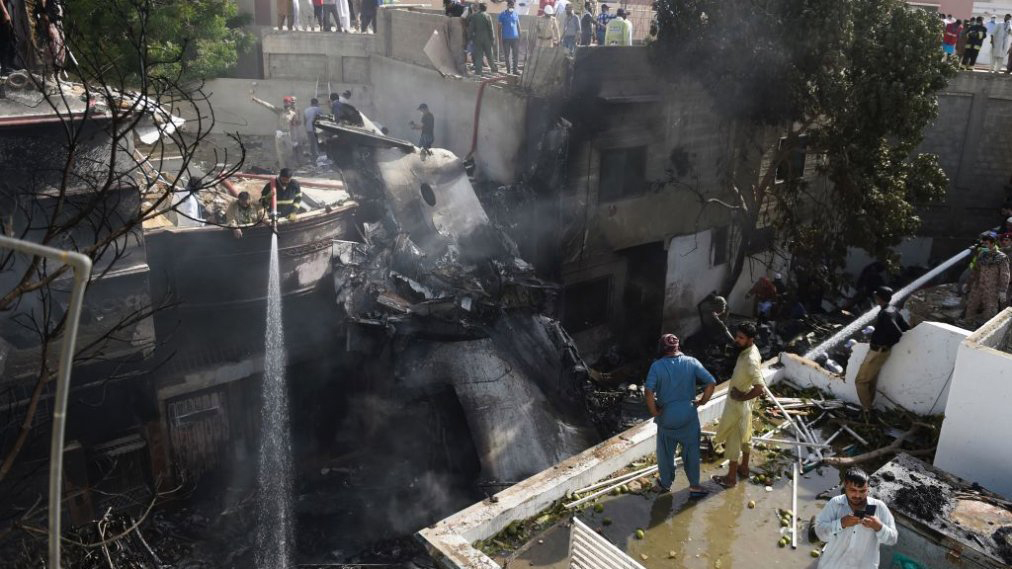 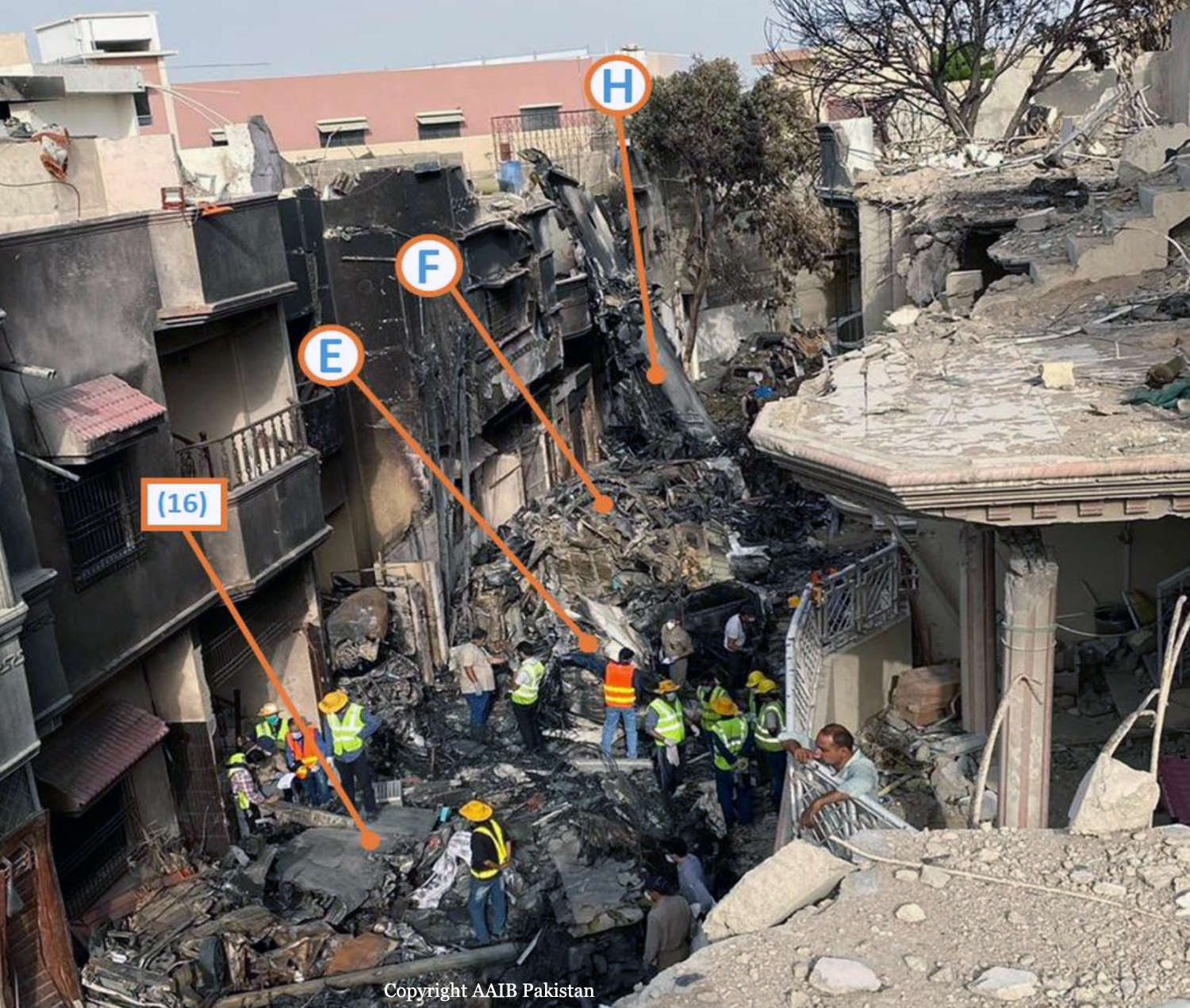 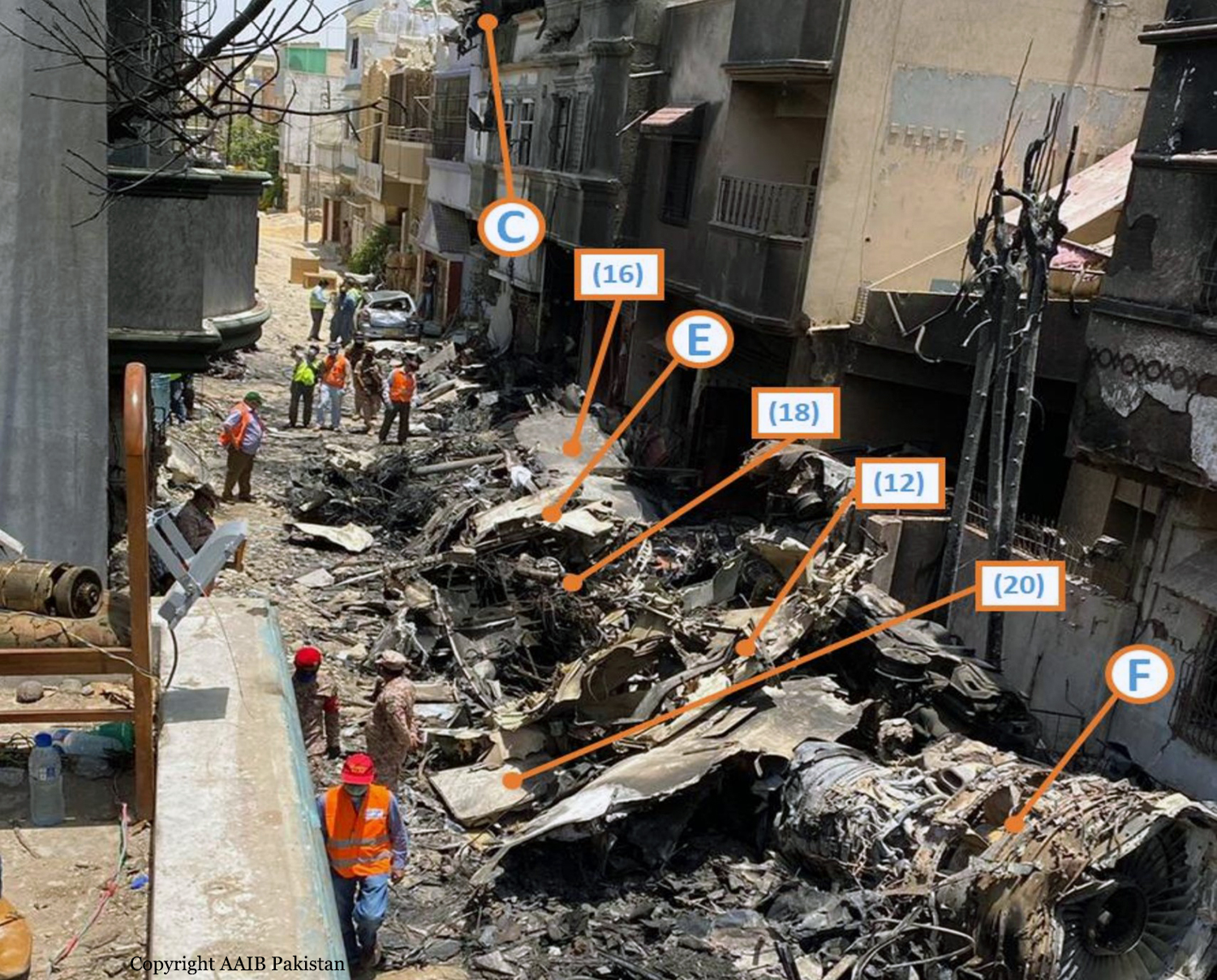 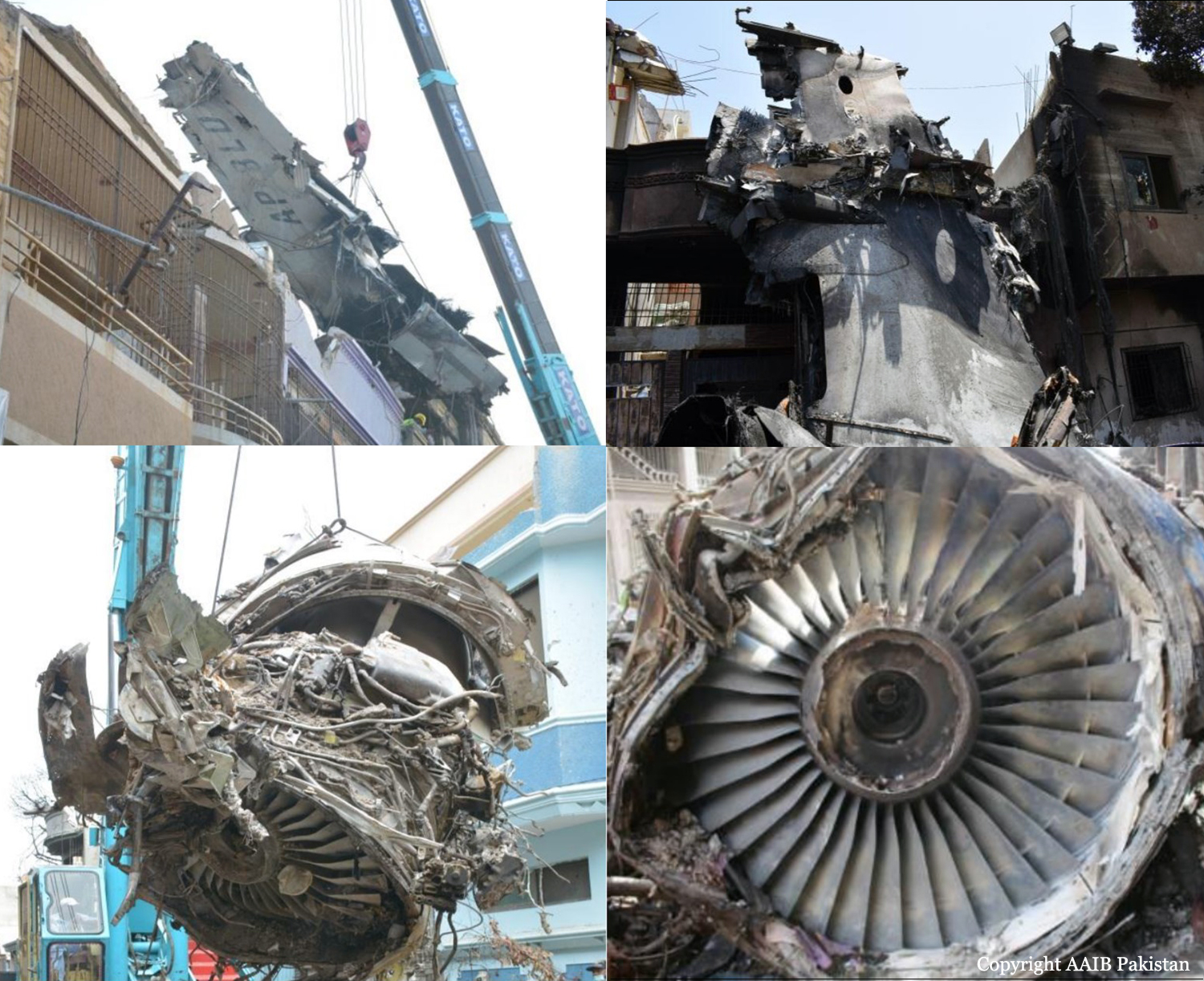 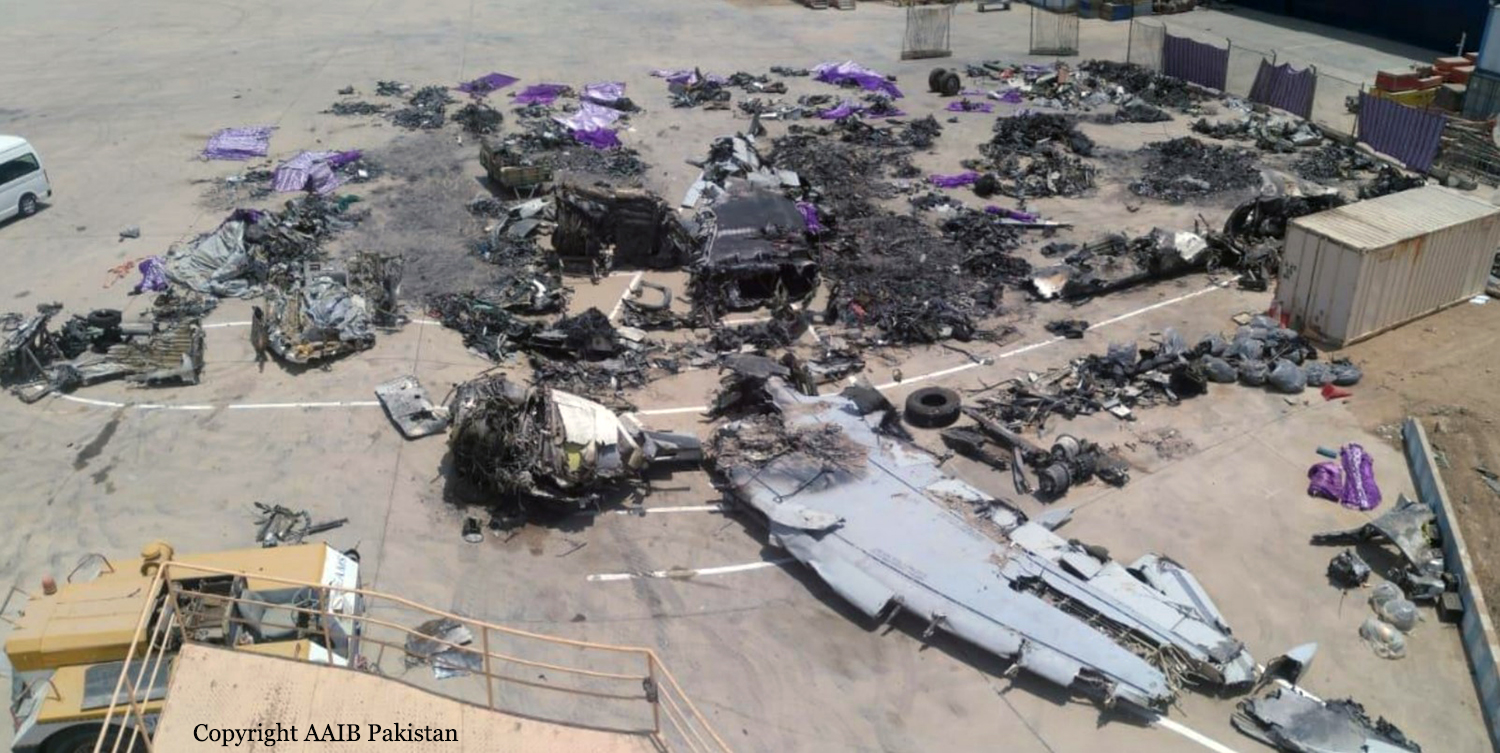 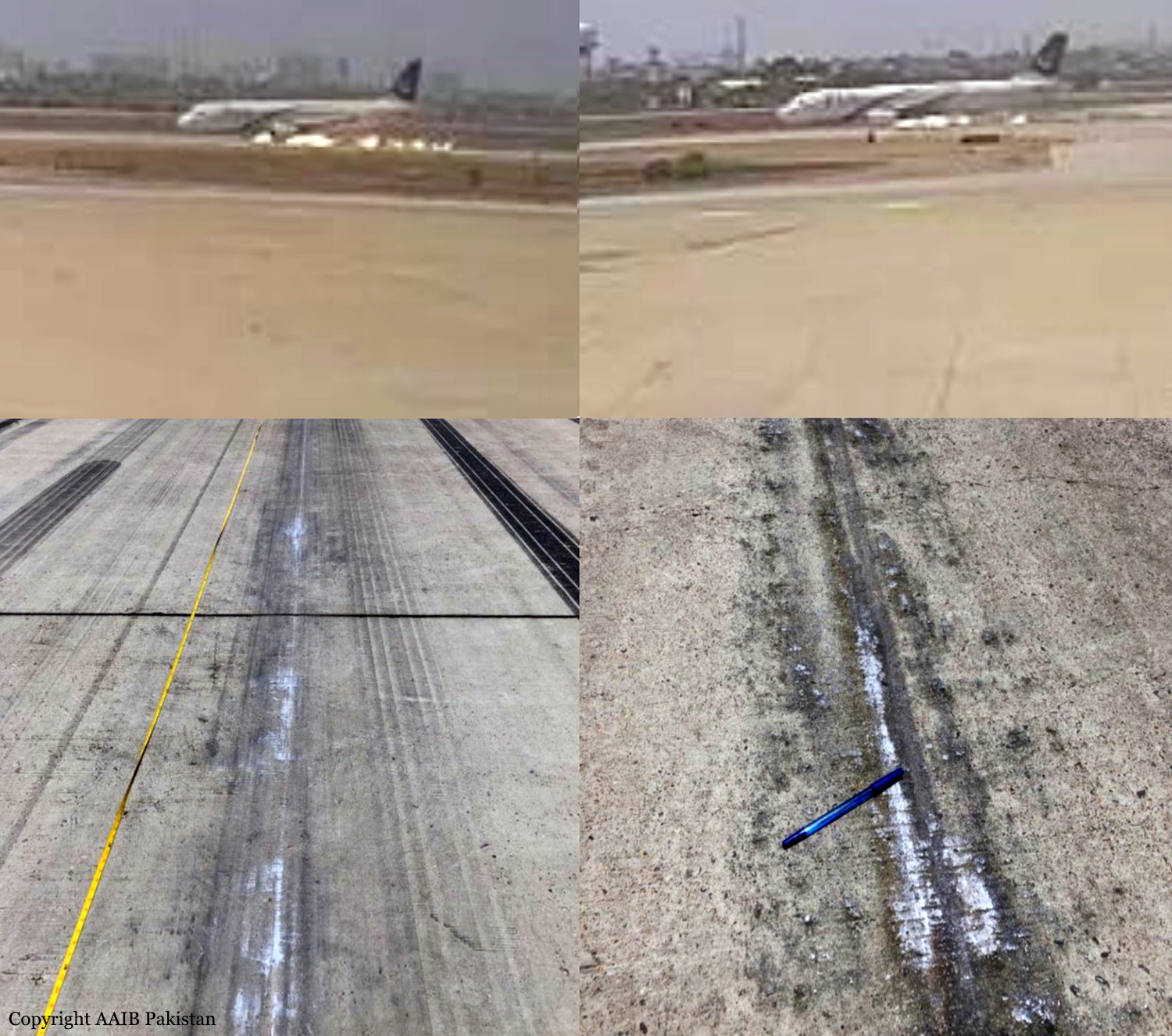 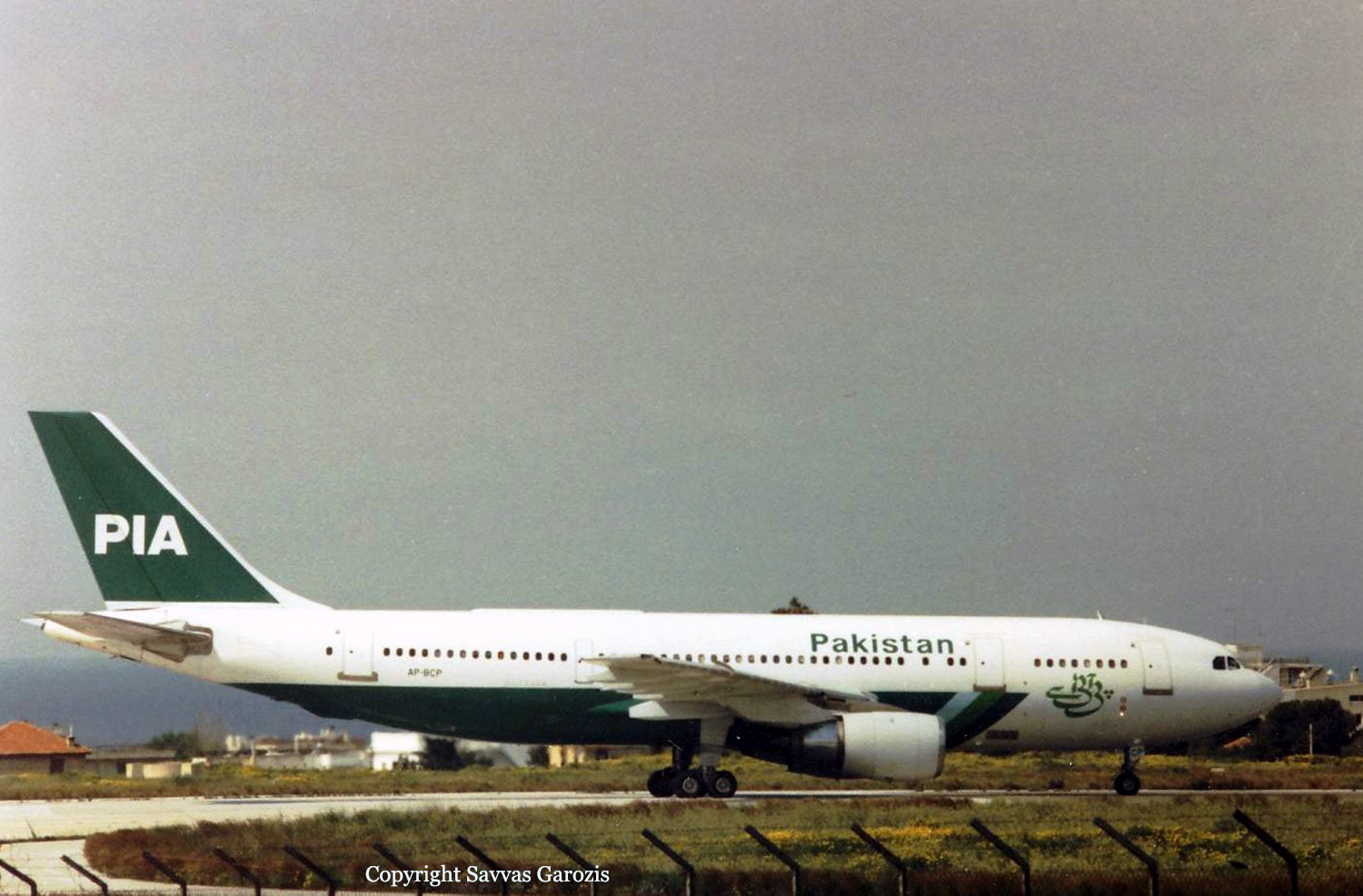 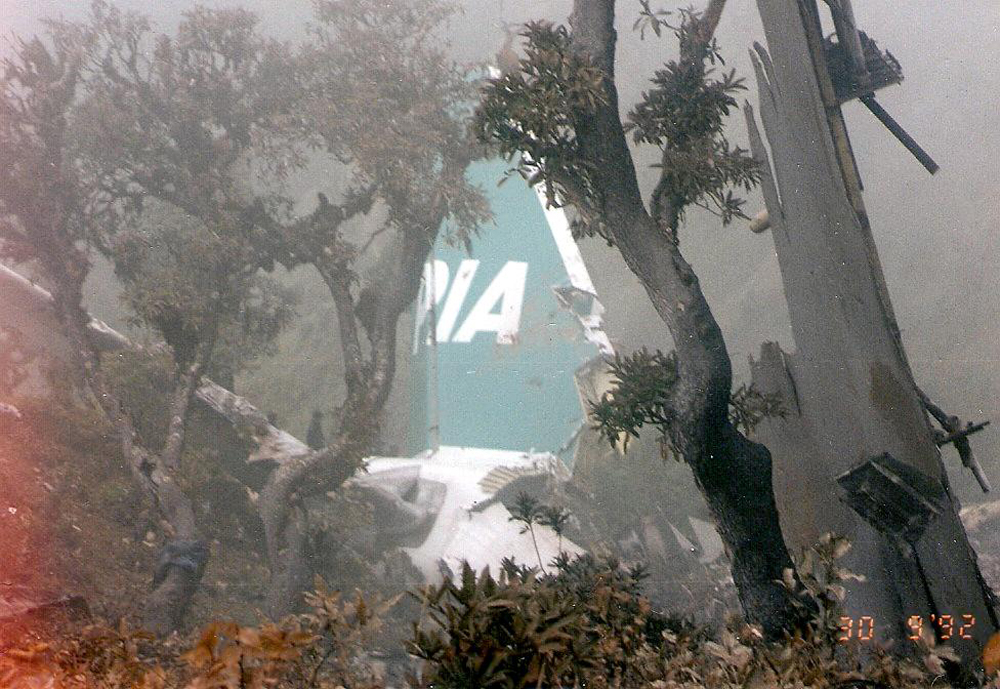 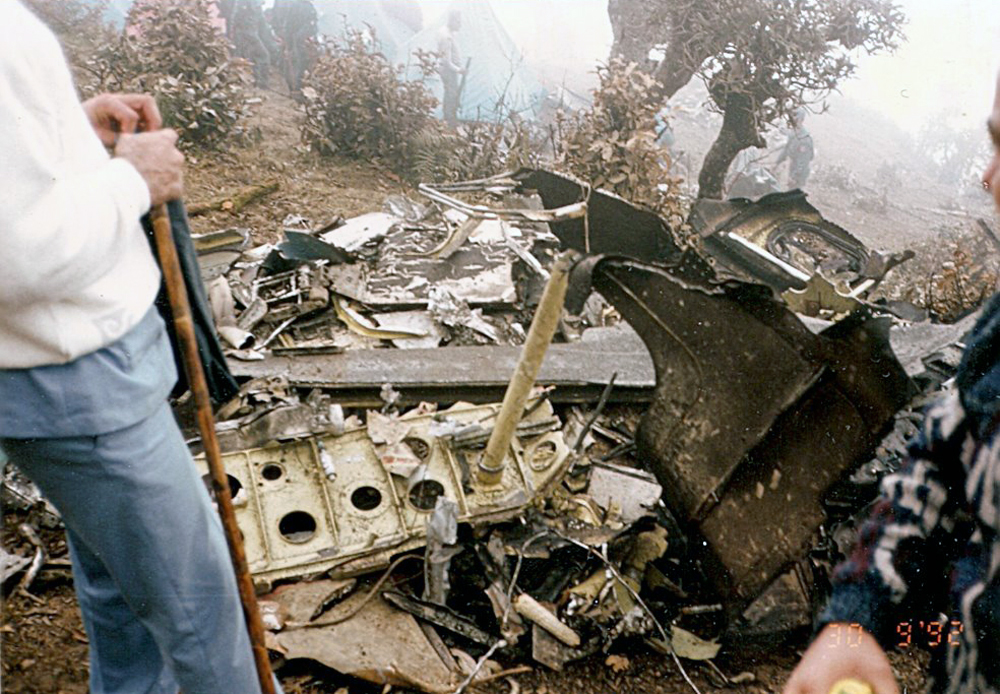 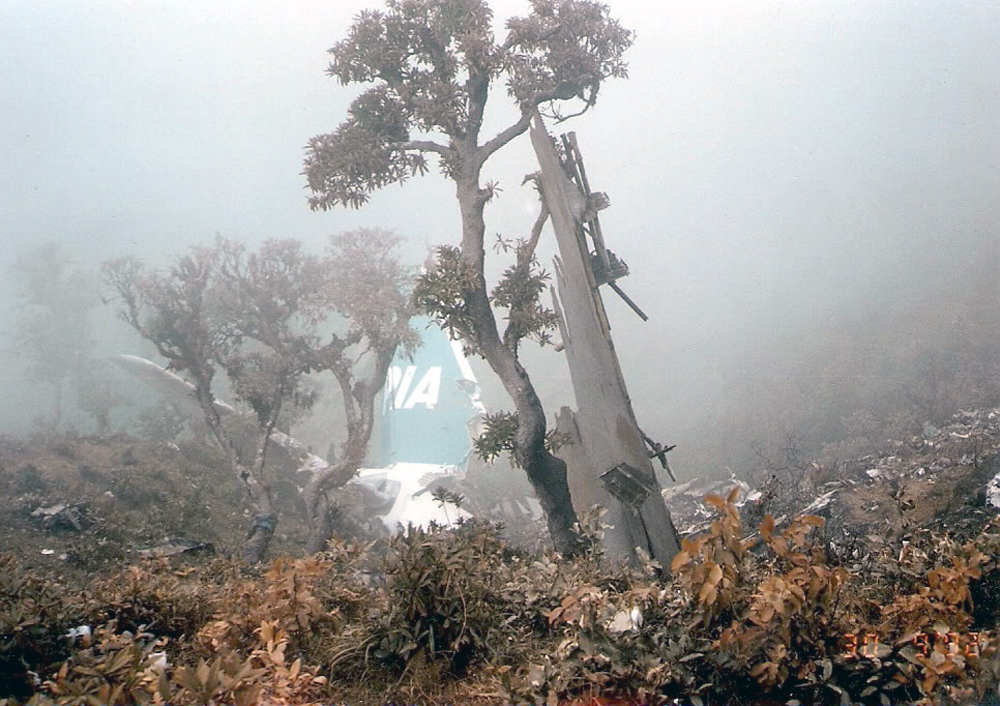 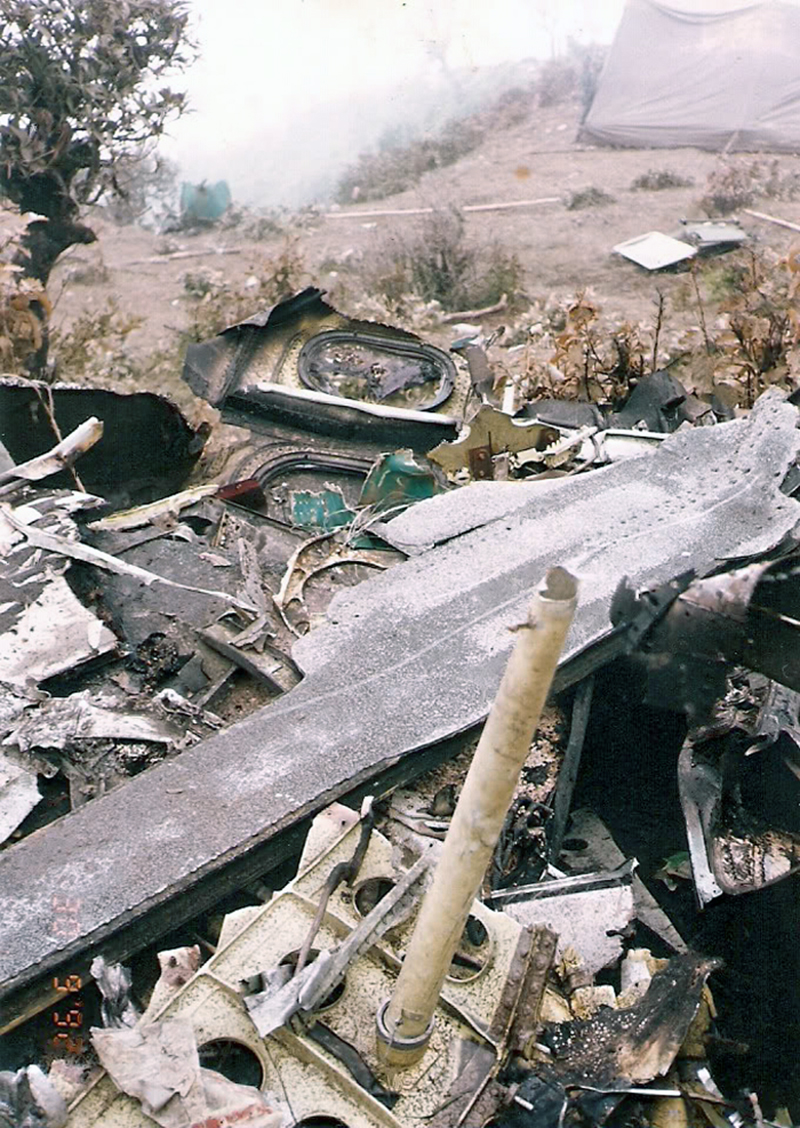 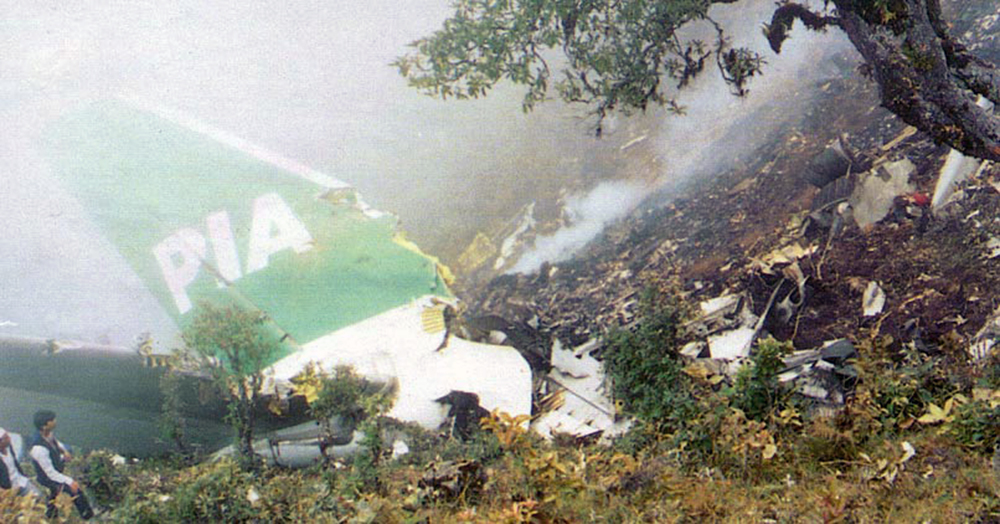 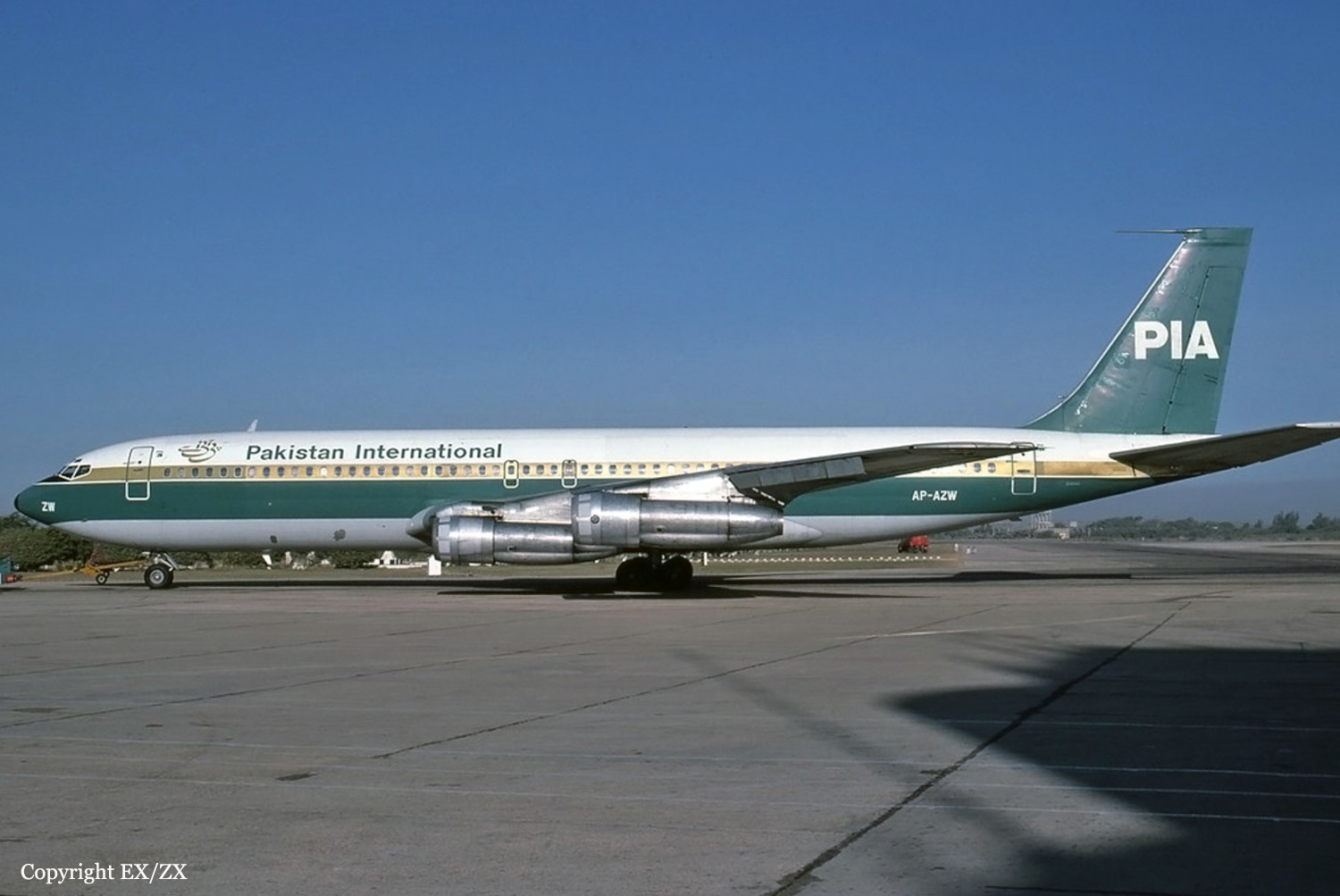 Crash of an Antonov AN-12B near Nawabshah: 24 killed

Registration:
CCCP-10232
Flight Phase:
Flight
Flight Type:
Military
Survivors:
No
Site:
Plain, Valley
Schedule:
Aden - Karachi - Tashkent
MSN:
3 3 411 07
YOM:
1963
Location:
Nawabshah
Sindh (سنڌ سندھ)
Country:
Pakistan
Region:
Asia
Crew on board:
9
Crew fatalities:
Pax on board:
15
Pax fatalities:
Other fatalities:
Total fatalities:
24
Circumstances:
The four engine aircraft was completing a military/cargo flight from Aden to Tashkent with an intermediate stop in Karachi. On the leg from Karachi to Tashkent, while cruising at an altitude of 5,500 meters, weather conditions deteriorated and the aircraft entered an area of hailstorm with severe turbulences. All four engine lost power and the crew was forced to shut down the engine n°1 and 3 while the engine n°2 and 4 were reduced to idle. The crew then initiated an emergency descent when the aircraft partially disintegrated in the air and crashed. It was determined that excessive g-loads caused several parts to detach during the emergency descent.
Probable cause:
It was determined that all four engines lost power in-flight after hail accumulated in the oil tanks.

Registration:
N738PA
Flight Phase:
Landing (descent or approach)
Flight Type:
Scheduled Revenue Flight
Survivors:
Yes
Site:
Airport (less than 10 km from airport)
Schedule:
New Delhi – Karachi – London – New York
MSN:
19645
YOM:
1970
Flight number:
PA073
Location:
Karachi-Muhammad Ali Jinnah-Quaid-e-Azam
Sindh (سنڌ سندھ)
Country:
Pakistan
Region:
Asia
Crew on board:
16
Crew fatalities:
Pax on board:
227
Pax fatalities:
Other fatalities:
Total fatalities:
0
Aircraft flight hours:
53324
Circumstances:
Flight PA073 was cleared to land on runway 25R of Karachi International Airport (KHI), Pakistan. The approach speed just prior to touchdown was 152 knots. After touchdown reverse thrust was applied on engines n°1, 2 and 3. Engine No.4 which had an unserviceable reverser was left in forward idle. Seventy knots was called and some three seconds later reverse power was decreased. At this stage EPR on n°4 engine increased rapidly. The aircraft veered to the left of the centerline at about 7400 feet from the approach end of runway 25R and departed the runway edge at 8000 feet from the approach end of runway 25R with 2,500 feet of runway remaining. Shortly before the aircraft departed the runway, the pilot flying (copilot) reported that he had no brakes and no nose wheel steering. The captain stated that he got on the brakes and tiller at this time to assist. After departing the runway surface the aircraft travelled 380 feet through soft mud before it came to rest at a point about 2100 feet from the end of runway 25R, heading about 160 degrees on the Southern side of the runway with the tail of the aircraft 120 feet from the runway edge. Shortly after the aircraft departed the runway, the nose gear struck a VASI light installation and its concrete base causing the nose gear to collapse backwards and to the left, resulting in total destruction of the VASI light installation and damage to the forward cargo hold, floor of the first class section and the stairway leading to the upper deck. Damage to the aircraft was substantial and it was not repaired. All 243 occupants evacuated safely.
Source: ASN
Probable cause:
Loss of directional control as the result of inadvertent application of forward thrust on n°4 engine at the time the pilot flying was coming out of reverse thrust on engines n°1, 2 and 3 during the landing roll, and subsequent failure of the crew to recognize the asymmetric power condition. Contributing were failure of the crew to monitor the engines, and failure to follow specified procedures during the landing. 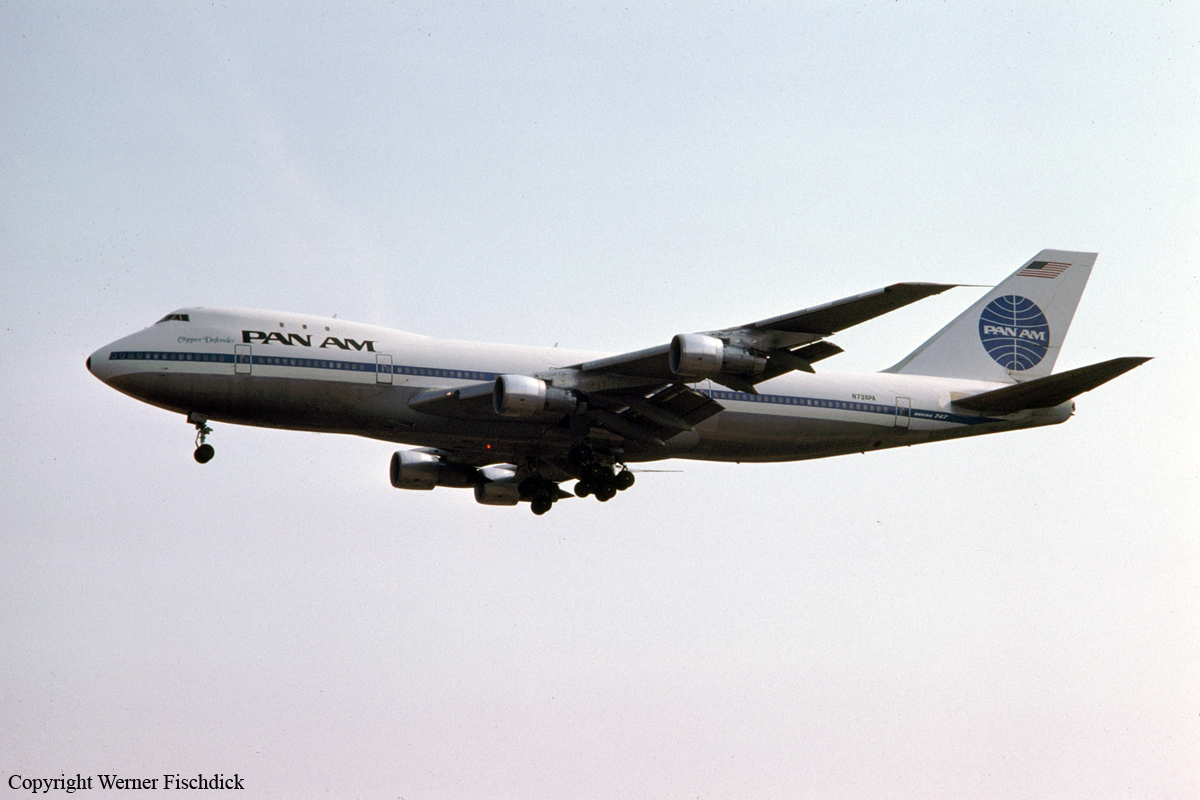 Registration:
AP-AXK
Flight Phase:
Landing (descent or approach)
Flight Type:
Scheduled Revenue Flight
Survivors:
Yes
Site:
Airport (less than 10 km from airport)
Schedule:
Karachi - Quetta
MSN:
48590/339
YOM:
1963
Flight number:
PK320
Location:
Karachi-Muhammad Ali Jinnah-Quaid-e-Azam
Sindh (سنڌ سندھ)
Country:
Pakistan
Region:
Asia
Crew on board:
7
Crew fatalities:
Pax on board:
72
Pax fatalities:
Other fatalities:
Total fatalities:
0
Circumstances:
On approach to Quetta, the crew was unable to lower the nose gear that remained stuck in its wheel well. The captain initiated a go-around and decided to return to Karachi Intl Airport. Despite several manual attempts to lower the gear, the crew eventually decided to land in a nose gear-up configuration. Upon touchdown, the airplane slid on its nose for few hundred yards before coming to rest. All 79 occupants escaped without injuries while the aircraft was damaged beyond repair.
Probable cause:
Failure of the nose gear that remained stuck in its wheel well for unknown reasons. 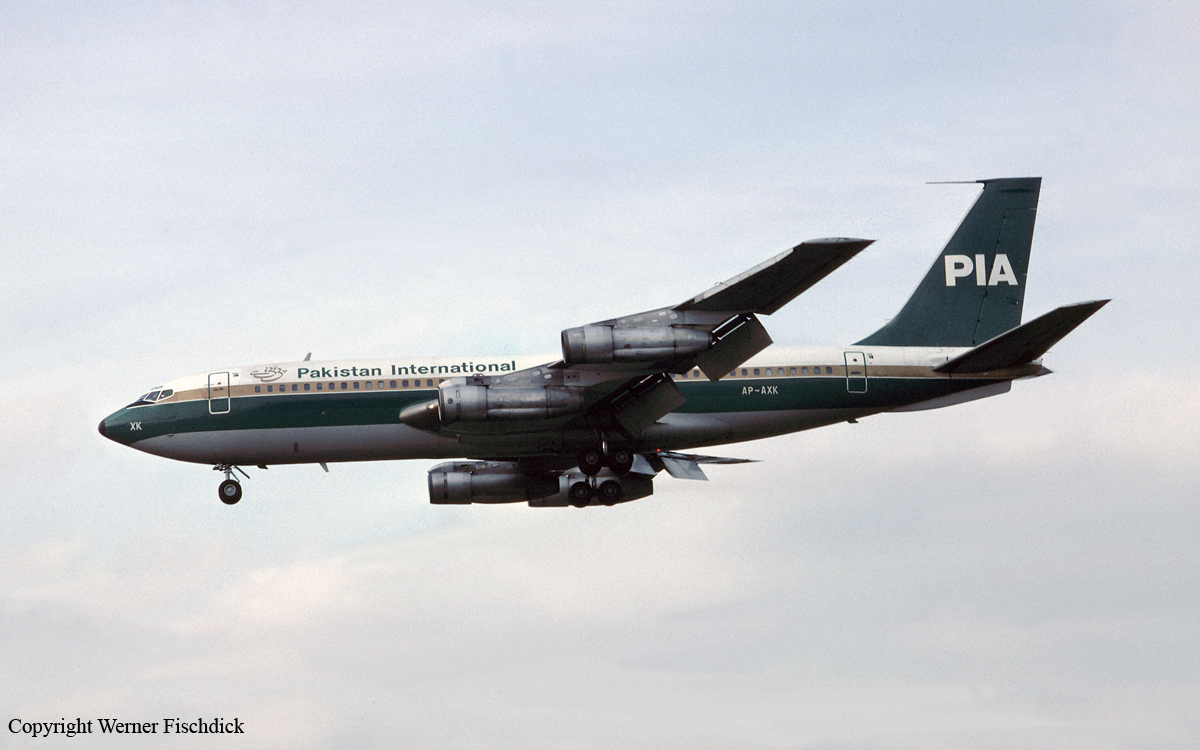 Crash of a Beechcraft 65-A80 Queen Air in Karachi 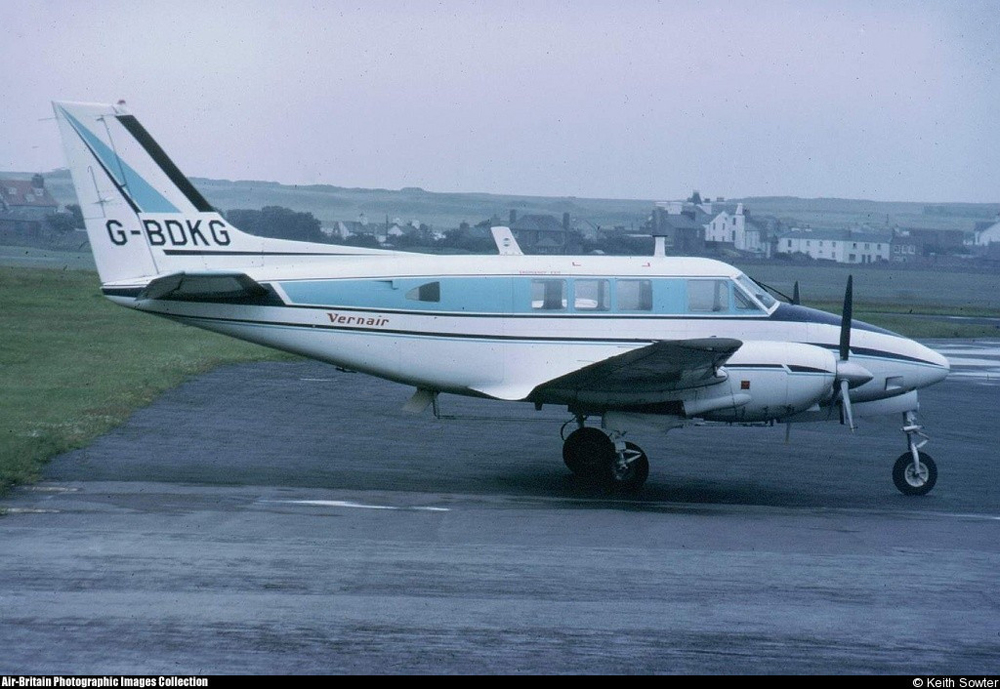 Crash of a Fokker F27 Friendship 200 in Karachi: 1 killed

Registration:
PK-GJA
Flight Phase:
Takeoff (climb)
Flight Type:
Scheduled Revenue Flight
Survivors:
No
Site:
Plain, Valley
Schedule:
Jakarta – Bombay – Karachi – Cairo – Rome – Amsterdam
MSN:
30-10-3
YOM:
1964
Location:
Mumbai
Maharashtra
Country:
India
Region:
Asia
Crew on board:
14
Crew fatalities:
Pax on board:
15
Pax fatalities:
Other fatalities:
Total fatalities:
29
Circumstances:
Less than five minutes after a night takeoff from Bombay-Santa Cruz Airport, while climbing, the aircraft entered a nose-down attitude then plunged into the earth and crashed in a huge explosion some 32 km north of the airport. The aircraft disintegrated on impact and all 29 occupants were killed as well as one person on the ground. Few houses were damaged and few other people were injured.
Probable cause:
It was determined that the loss of control was the consequence of the partial or complete failure of all four engines during the initial climb. Investigations reported that during the stop at Bombay Airport, the wrong type of fuel was transferred into the tanks of the Coronado. Instead of kerosene, ground staff fueled the aircraft with regular benzin. 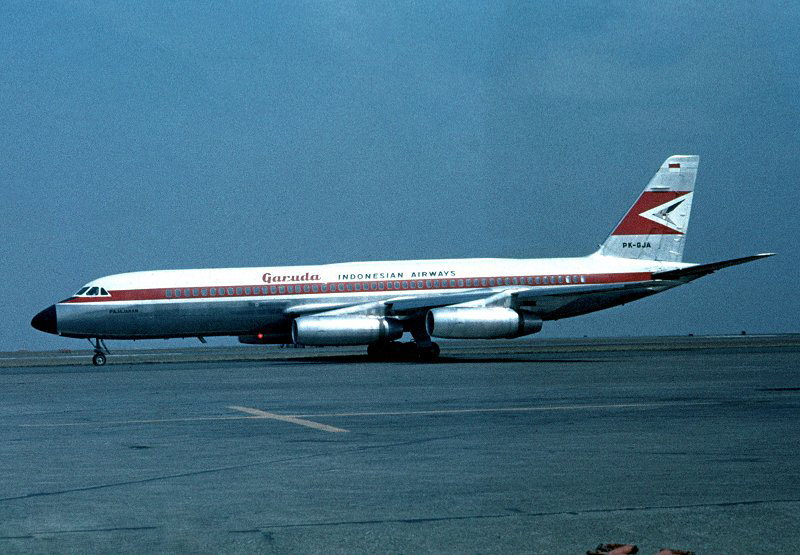 Crash of a Aviation Traders ATL-98 Carvair in Karachi: 13 killed