Crash of a Britten-Norman Islander in South Africa: 9 killed

Registration:
ZS-OSD
Flight Phase:
Flight
Flight Type:
Private
Survivors:
No
Site:
Mountains
Schedule:
Inhambane - Nelspruit - Bloemfontein
MSN:
0461
YOM:
1975
Location:
South Africa
All South Africa
Country:
South Africa
Region:
Africa
Crew on board:
1
Crew fatalities:
Pax on board:
8
Pax fatalities:
Other fatalities:
Total fatalities:
9
Captain / Total flying hours:
275
Captain / Total hours on type:
9.00
Circumstances:
Approximately 20 minutes after take-off from FAKN, a witness observed the aircraft flying at an altitude of approximately 1000 ft AGL with the wings level in a southerly direction, overhead the farm, in the direction of the mountains. The witness noted that the aircraft was flying much lower than aircraft would normally fly when they flew over the farm. Thick mist covered approximately one third (1/3) of the top of the mountain at the time. The witness then lost sight of the aircraft and approximately two minutes later he heard an explosion. The witness immediately notified the Kruger Mpumalanga Airport authorities that an aircraft may have been involved in an accident. A search and rescue operation was initiated after the appropriate authorities had been informed. The search and rescue operation that consisted of air and ground searches were hampered by adverse weather conditions in the area from where the witness had heard the explosion emanating. The wreckage was located the following day during the air search operation, approximately 170ft below the mountain top, where the aircraft had impacted with terrain. The aircraft had ploughed through a pine tree plantation, and was destroyed in the impact sequence and by the post-impact fire that had erupted. All the occupants on board the aircraft were fatally injured in the accident.
Probable cause:
The pilot encountered adverse weather (IMC) conditions en route during a VFR flight, which resulted in controlled flight into terrain (CFIT) near the top of the mountain.
Final Report: 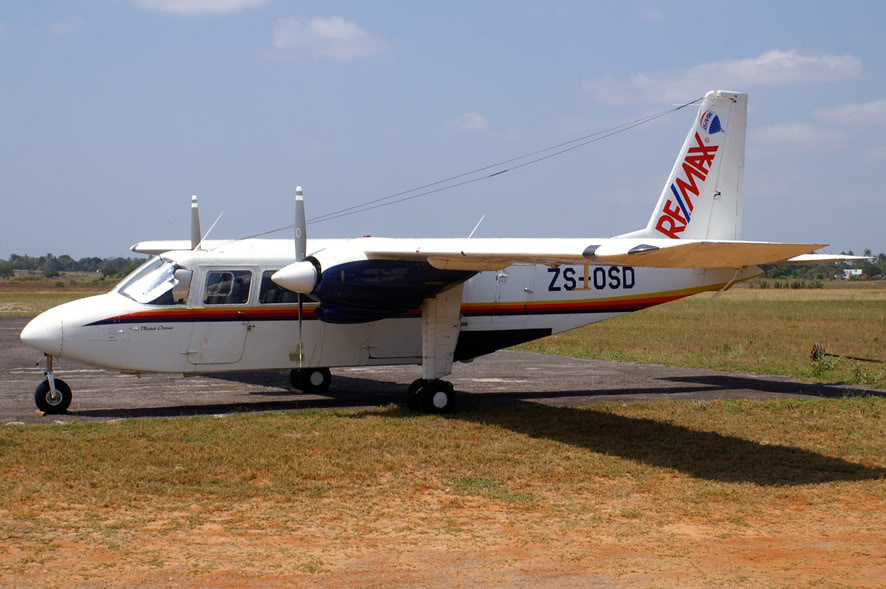 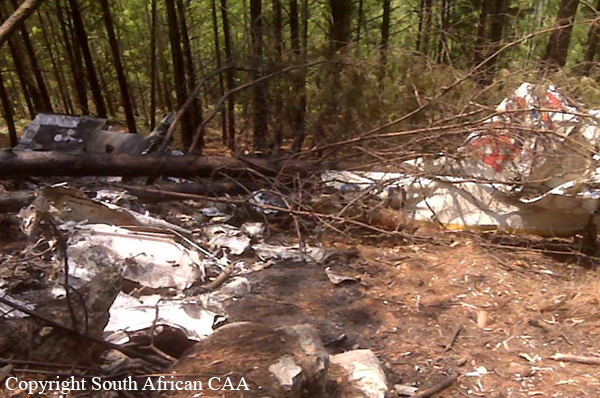 Crash of a Swearingen SA227AC Metro III in George

Type of aircraft:
Swearingen SA227 Metro III
Operator:
Ryan Blake Air Charter
Registration:
ZS-OLS
Flight Phase:
Landing (descent or approach)
Flight Type:
Cargo
Survivors:
Yes
Site:
Airport (less than 10 km from airport)
Schedule:
Bloemfontein – George
MSN:
AC-748B
YOM:
1989
Location:
George
Western Cape
Country:
South Africa
Region:
Africa
Crew on board:
2
Crew fatalities:
Pax on board:
0
Pax fatalities:
Other fatalities:
Total fatalities:
0
Captain / Total flying hours:
2465
Captain / Total hours on type:
657.00
Aircraft flight hours:
8760
Circumstances:
The aircraft was on a Domestic Charter flight (IFR) from Bloemfontein Aerodrome to George Aerodrome when the crew elected to execute an ILS approach for landing onto Runway 11. At 1,000 feet from the threshold of Runway 11 with the undercarriage selected down and at full flaps for landing at an IAS of 120kt when he advised the copilot that was the flying pilot at the time, to continue visually with the approach for Runway 11. Shortly thereafter they heard a loud impact sound and the right hand engine failed. The aircraft suddenly yawed and banked severely to the right and the flying pilot commented that they had experienced a bird strike on the right hand engine. The pilot-in-command immediately took over the controls and attempted to arrest the yaw to the right but the aircraft kept yawing to the right. He then made a blind transmission on frequency 118.9 MHz and called for a go-around. The co-pilot then selected full power on both engines retracted the undercarriage, whilst the pilot-in-command feathered the right-hand propeller. According to the pilot-in-command, the aircraft continued to yaw to the right and with the stall aural warning sounding with a loss of altitude, he pulled the left-hand engine stop and feather control and was committed to execute a forced landing on a cattle farm The pilot-in-command stated that aircraft was approximately just outside the boundary fence. Both wings collided with the gum poles of a telephone and wire fence causing extensive damage to the wings and fuselage under-surface. Both occupants sustained no injuries.
Probable cause:
The aircraft encountered a bird strike on the right-hand engine prior to landing at George Aerodrome. It appears that the cockpit crew did not apply the correct procedures for a go-around when the aircraft yawed Severely to the right. The aircraft failed to climb and a forced landing was executed on a cattle farm.
Final Report: 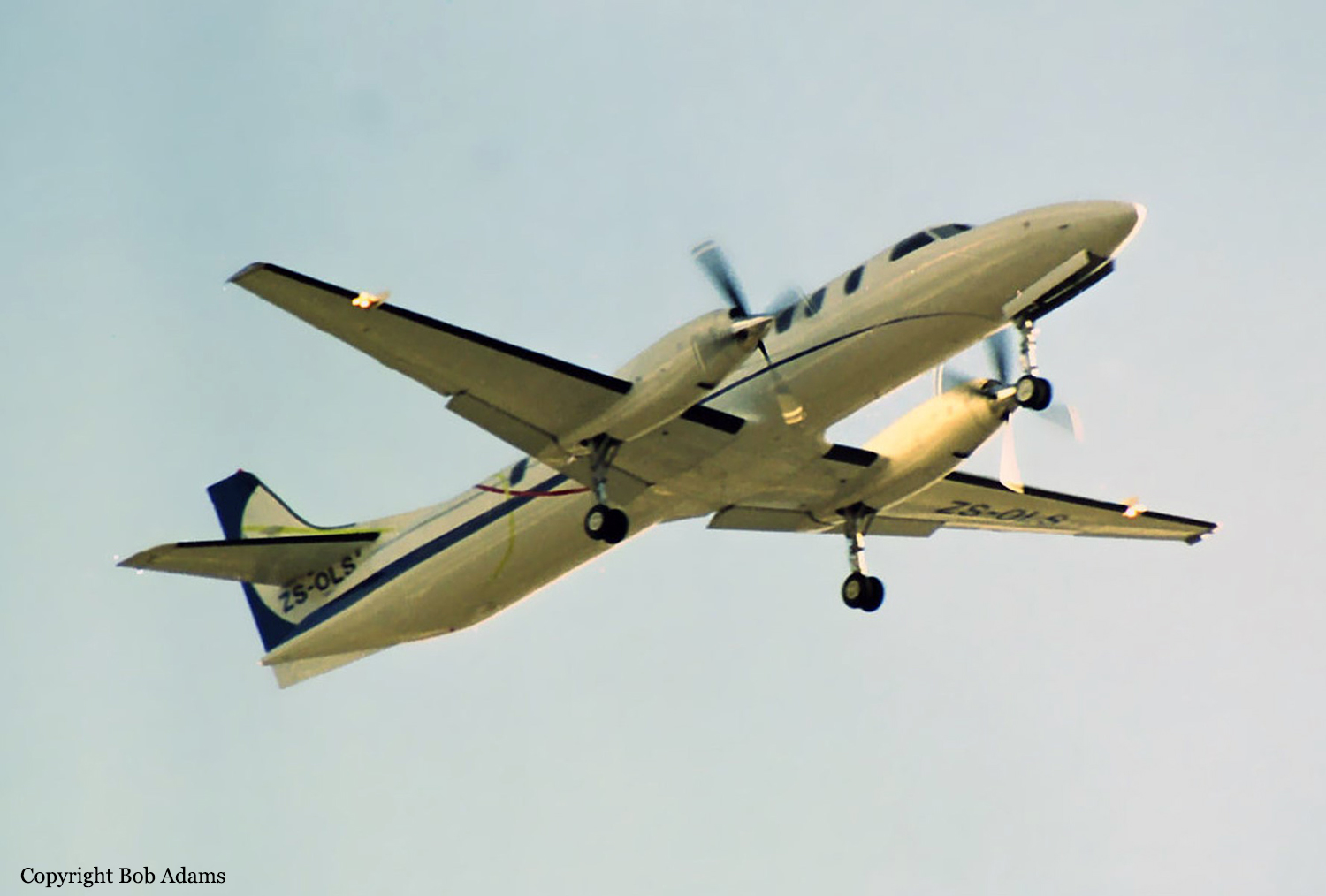 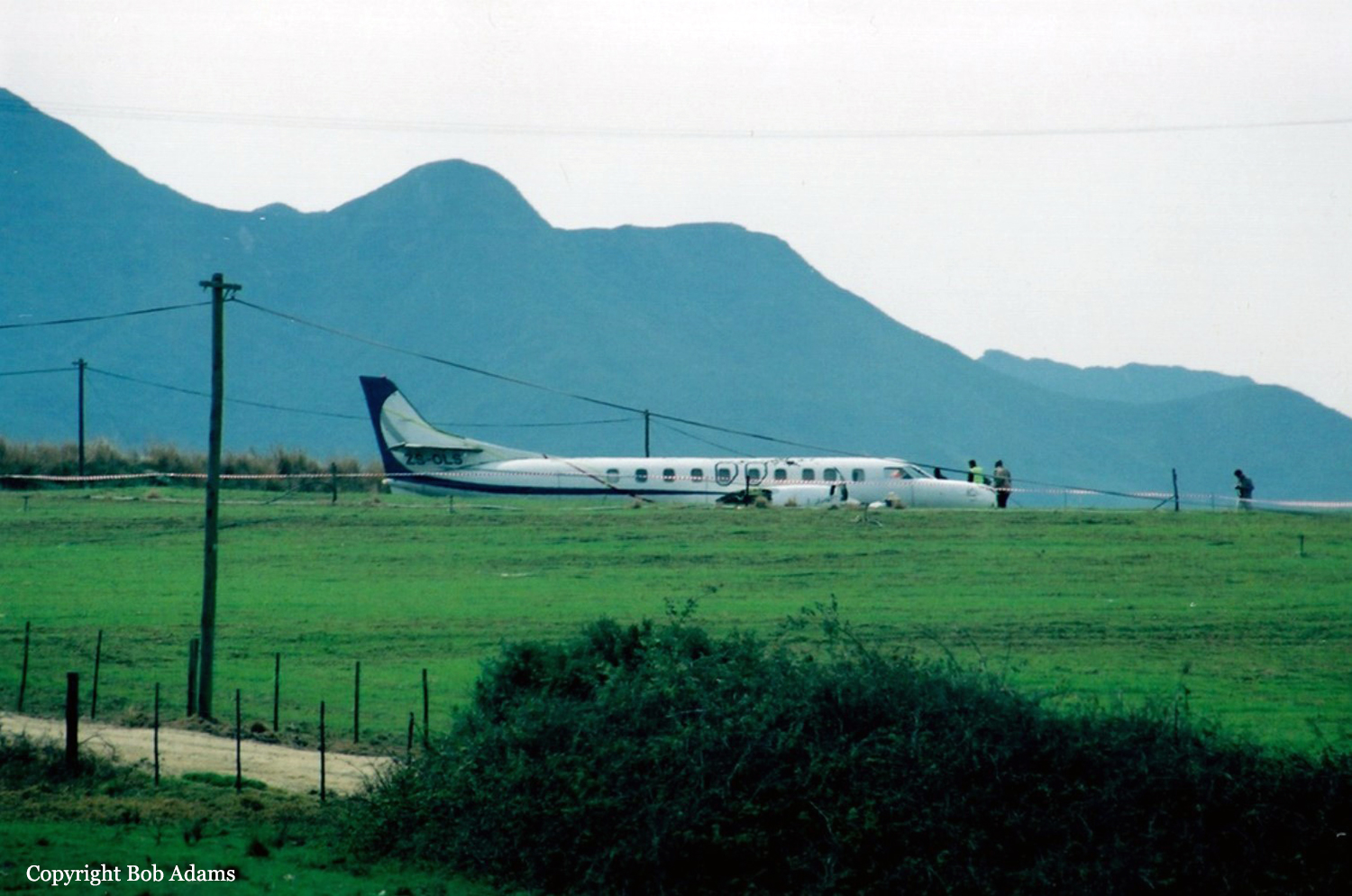 Registration:
ZS-OJU
Flight Phase:
Landing (descent or approach)
Flight Type:
Postal (mail)
Survivors:
No
Site:
Mountains
Schedule:
Bloemfontein - George
MSN:
1782
YOM:
1980
Location:
George
Western Cape
Country:
South Africa
Region:
Africa
Crew on board:
2
Crew fatalities:
Pax on board:
1
Pax fatalities:
Other fatalities:
Total fatalities:
3
Captain / Total flying hours:
20963
Captain / Total hours on type:
1819.00
Copilot / Total flying hours:
1099
Copilot / Total hours on type:
518
Aircraft flight hours:
14226
Aircraft flight cycles:
19789
Circumstances:
The aircraft was on a scheduled freight flight from Bloemfontein to George. Poor weather conditions prevailed over the George area and the pilots had to execute an instrument guided approach for the landing. The ground based Instrument Landing System (ILS) on Runway 29 at George Aerodrome was intermittently unreliable during the approach. The pilots decided to execute a missed approach. During the missed approach the pilots did not comply with the published missed approach procedure and with a combination of strong winds and possible erroneous heading indications they lost situational awareness. They flew the aircraft into a valley and crashed into the side of the mountains North-East of the George Aerodrome. The passenger was Hansie Cronje, a former South African cricket captain who had missed a South African Airlines flight.

Probable cause:
The crew deviated from the prescribed missed approach procedure during an attempted Instrument Landing System landing on Runway 29 at George in Instrument Meteorological Conditions and lost situational awareness aggravated by the presence of strong upper SouthWesterly winds. They allowed the aircraft to drift off course resulting in a controlled impact with terrain 6.7 nm North-East of the aerodrome. Contributing factors to the probable cause were the weather conditions, the intermittent unreliability of the Instrument Landing System, the serviceability of the directional gyro and the uncleared defects.
Final Report: 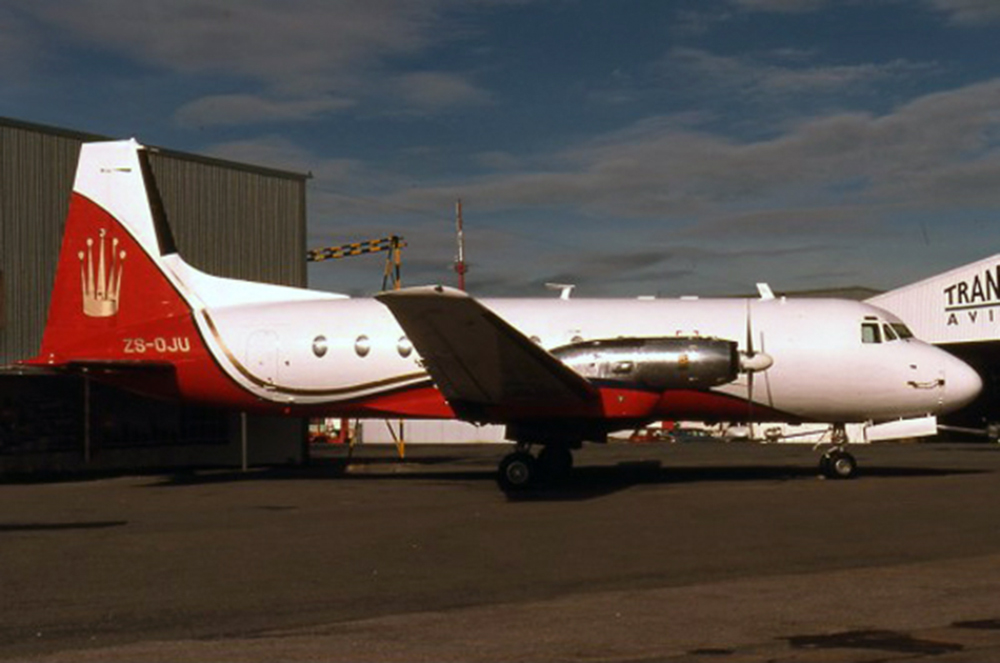 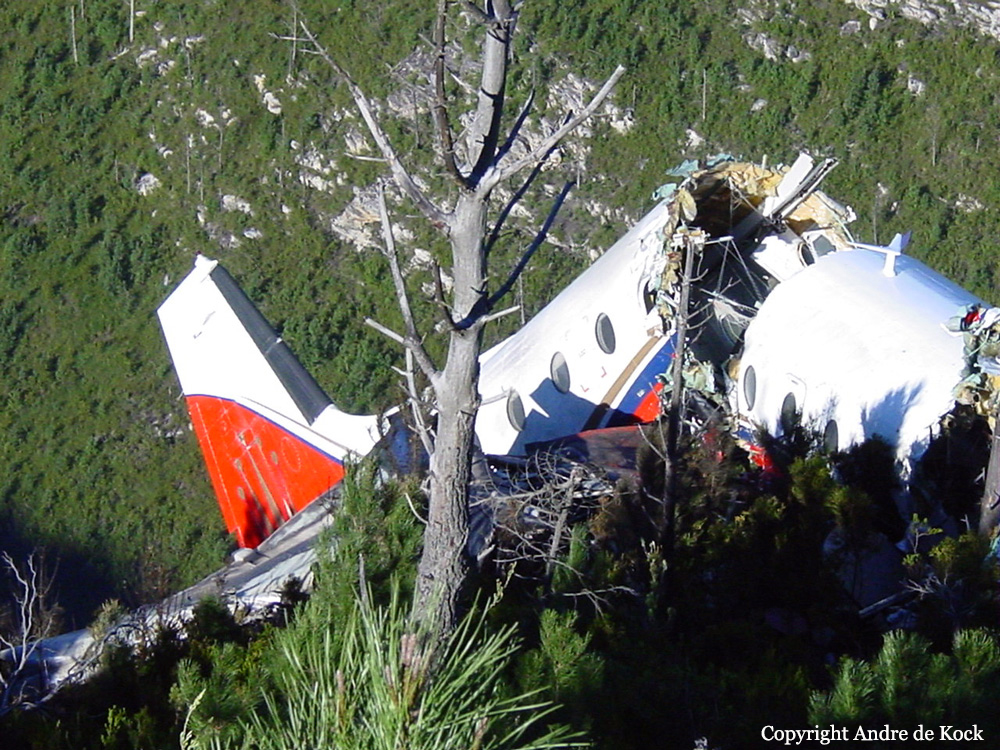 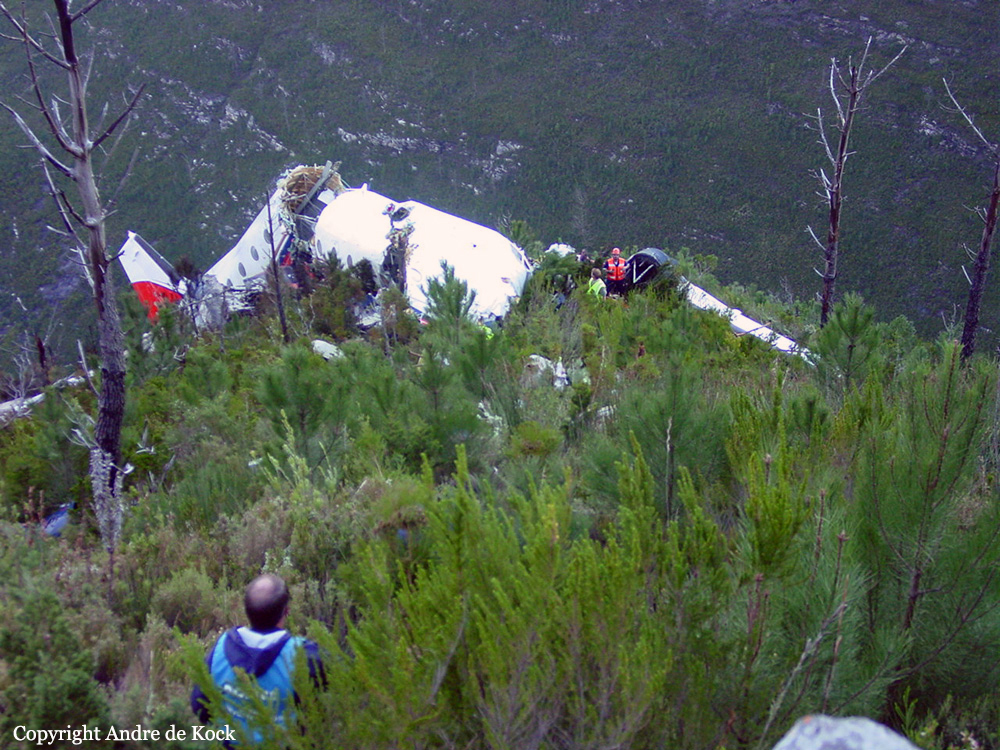 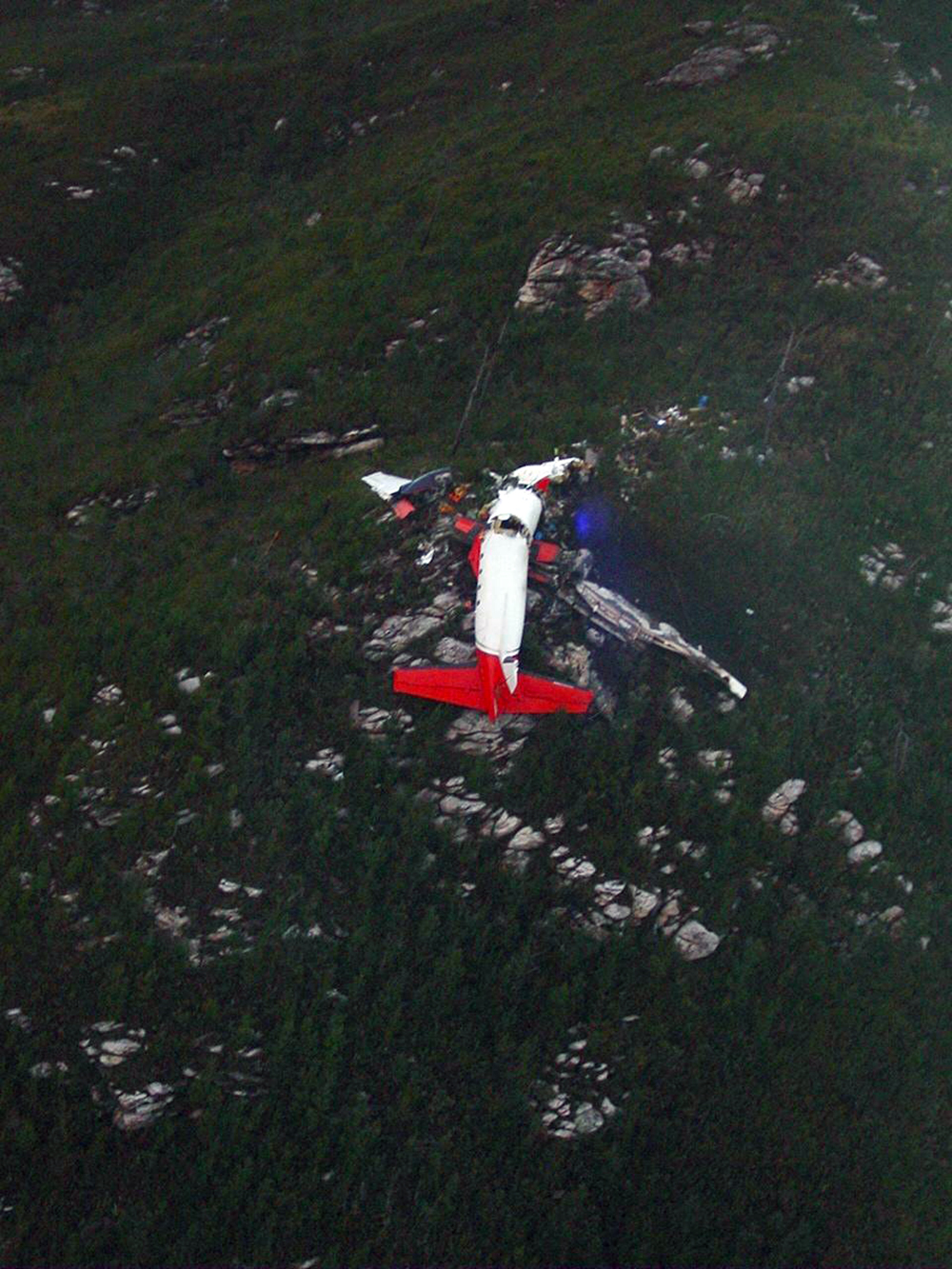 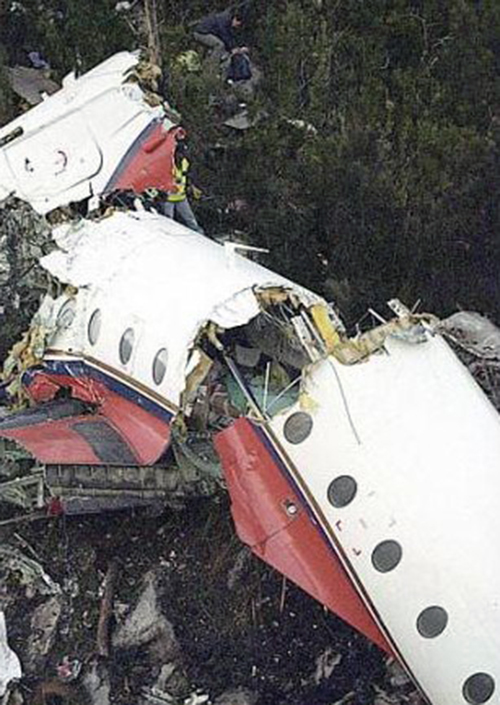 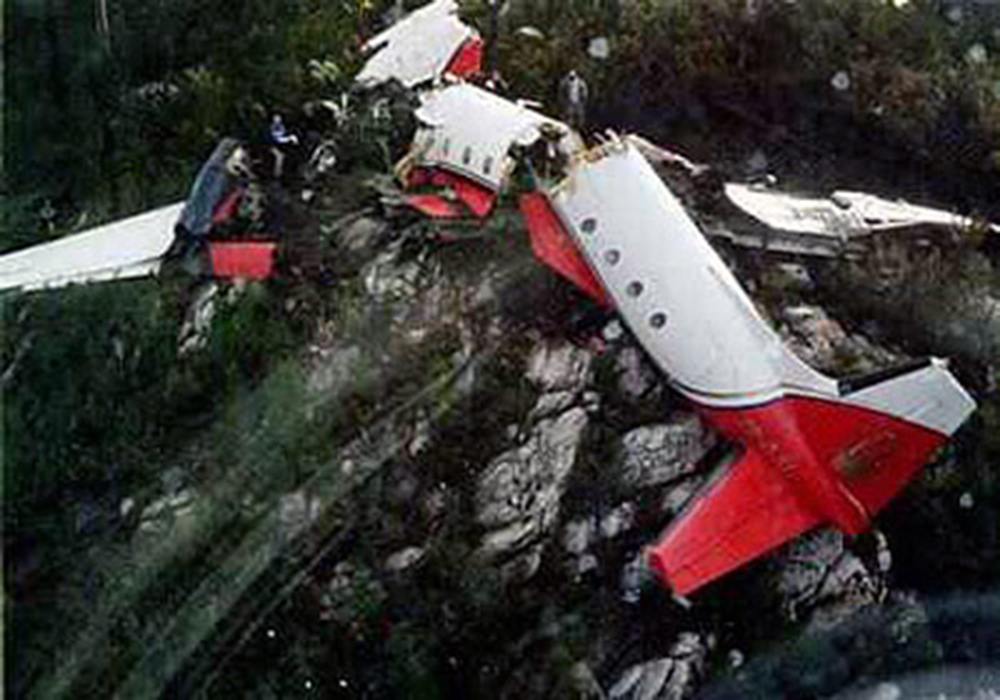 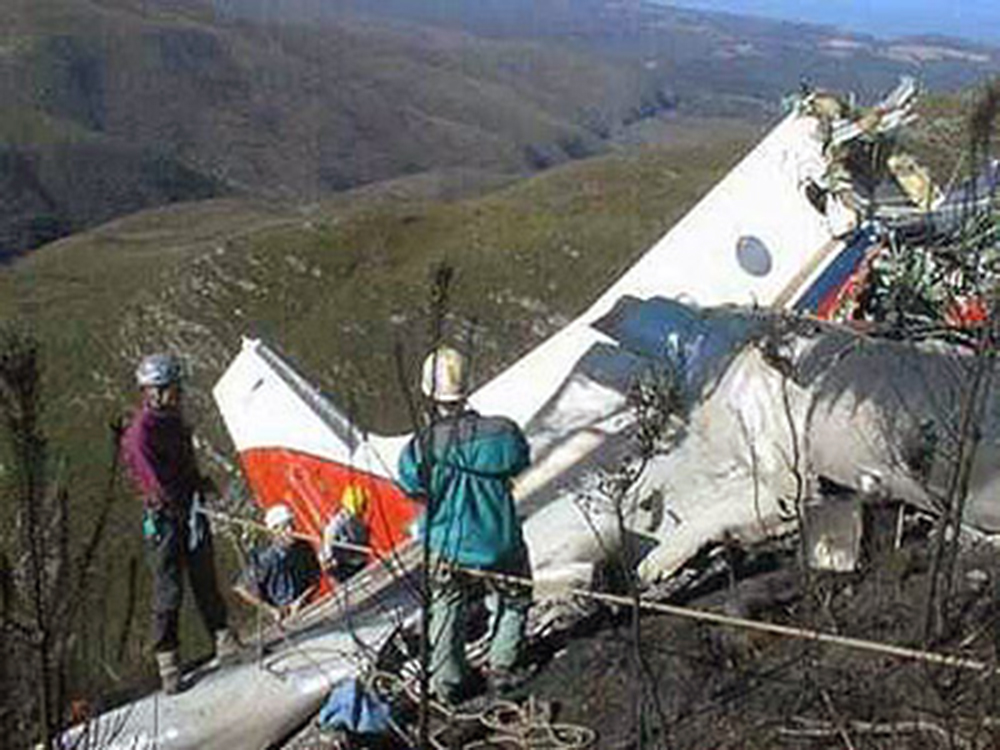 Crash of a Douglas C-47A-1-DK in Bloemfontein

Registration:
ZS-UAS
Flight Phase:
Flight
Flight Type:
Charter/Taxi (Non Scheduled Revenue Flight)
Survivors:
No
Site:
Plain, Valley
Schedule:
Bloemfontein - Johannesburg
MSN:
6154
YOM:
1942
Location:
Hennenman
Free State
Country:
South Africa
Region:
Africa
Crew on board:
3
Crew fatalities:
Pax on board:
21
Pax fatalities:
Other fatalities:
Total fatalities:
24
Circumstances:
The twin engine airplane was completing a charter flight from Bloemfontein to Johannesburg, carrying a team of jockeys and trainers. While cruising at an altitude of 9,000 feet, the captain declared an emergency due to an in-flight fire in the cabin. Cleared to return to Bloemfontein Airport, the crew started an emergency descent when the aircraft entered a dive and crashed in a 45° nose-down angle in an open field located in Hennenman, about 25 km east of Welkom. The aircraft disintegrated on impact and all 24 occupants were killed.
Crew:
Jacob Kalt, captain,
Harold Whitehead, copilot,
Jacqueline Henderson, stewardess.
Passengers:
Keith Basel,
Lawrence Riley,
Johannes “Rooies” Fourie,
Warren Baillie,
Bennie de Wet,
Greg Holme,
Douglas Roper,
Danny Lombard,
John McMurtry,
Mark Nel,
Michael Coetzee,
Simon Rahilly,
Gordon Sterley
Graham Kent,
Dave Bullock,
Henry Havergall,
Ginger Masterton,
Johannes van der Linden,
Jacobus Viljoen,
Neville Blignaut,
Hennie van Wyk.
Probable cause:
It was determined that a high intensity fire developed under the floor of the main cabin just behind the cockpit. The airplane crashed about 2 1/2 minutes after the crew declared an emergency. No error on part of the crew was noticed during investigations and it was reported that the aircraft's maintenance was in accordance with regulations. No technical issues were found on the aircraft. Control was lost after the pilot have been intoxicated by fumes inhalation. It is believed that the fire may erupted following the failure of a fuel booster pump connected to the right engine. 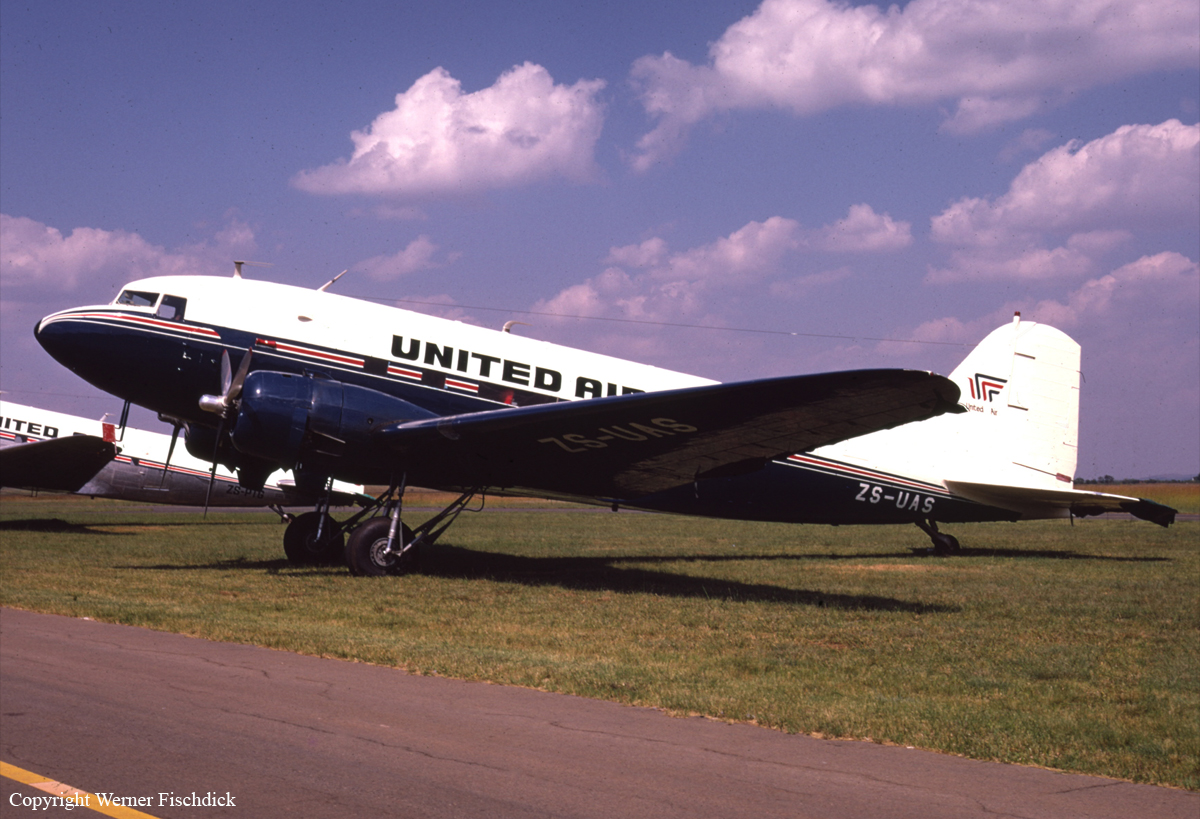 Crash of a Douglas C-47 Dakota IV near Bloemfontein

Crash of a De Havilland DH.60X Moth in Bloemfontein

Crash of a De Havilland DH.60X Moth in Bloemfontein