Crash of a Learjet 25B in Toluca 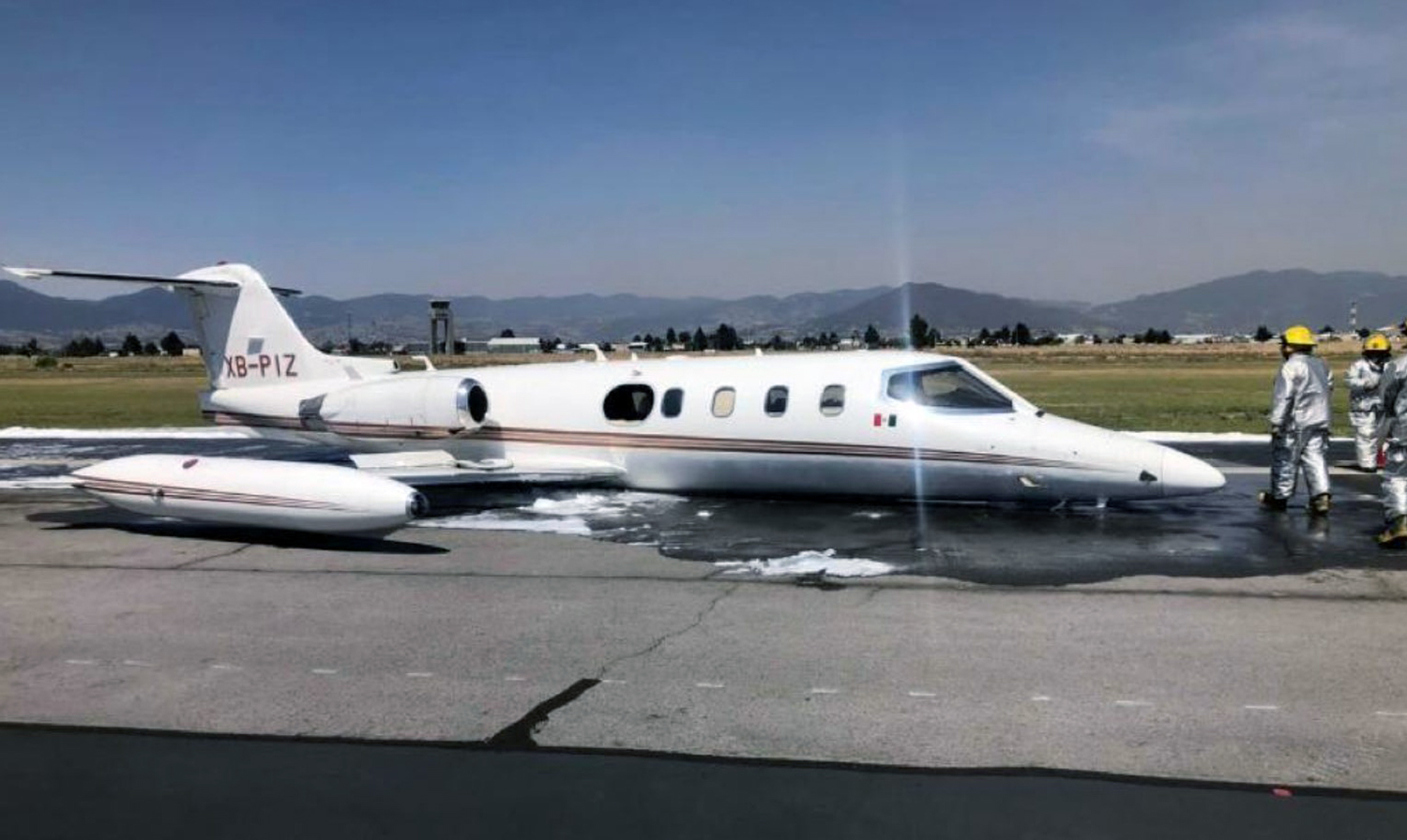 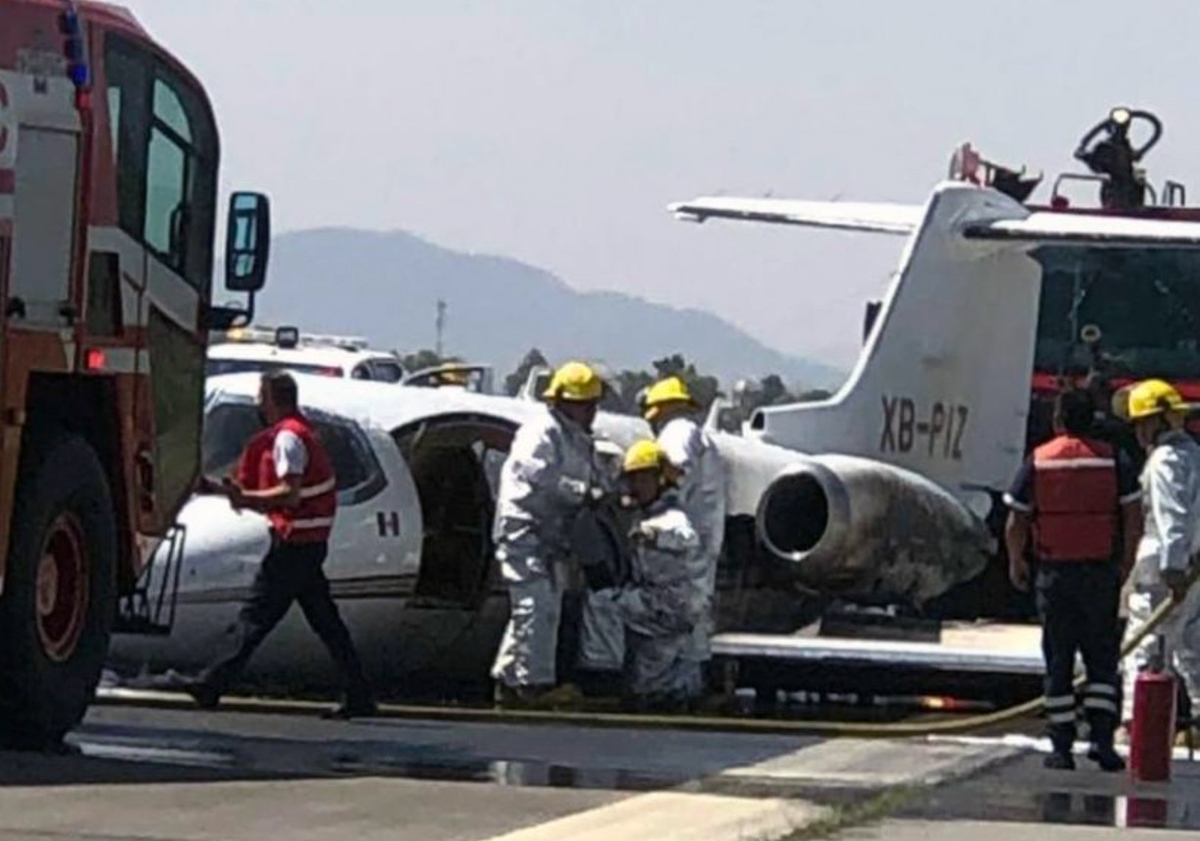 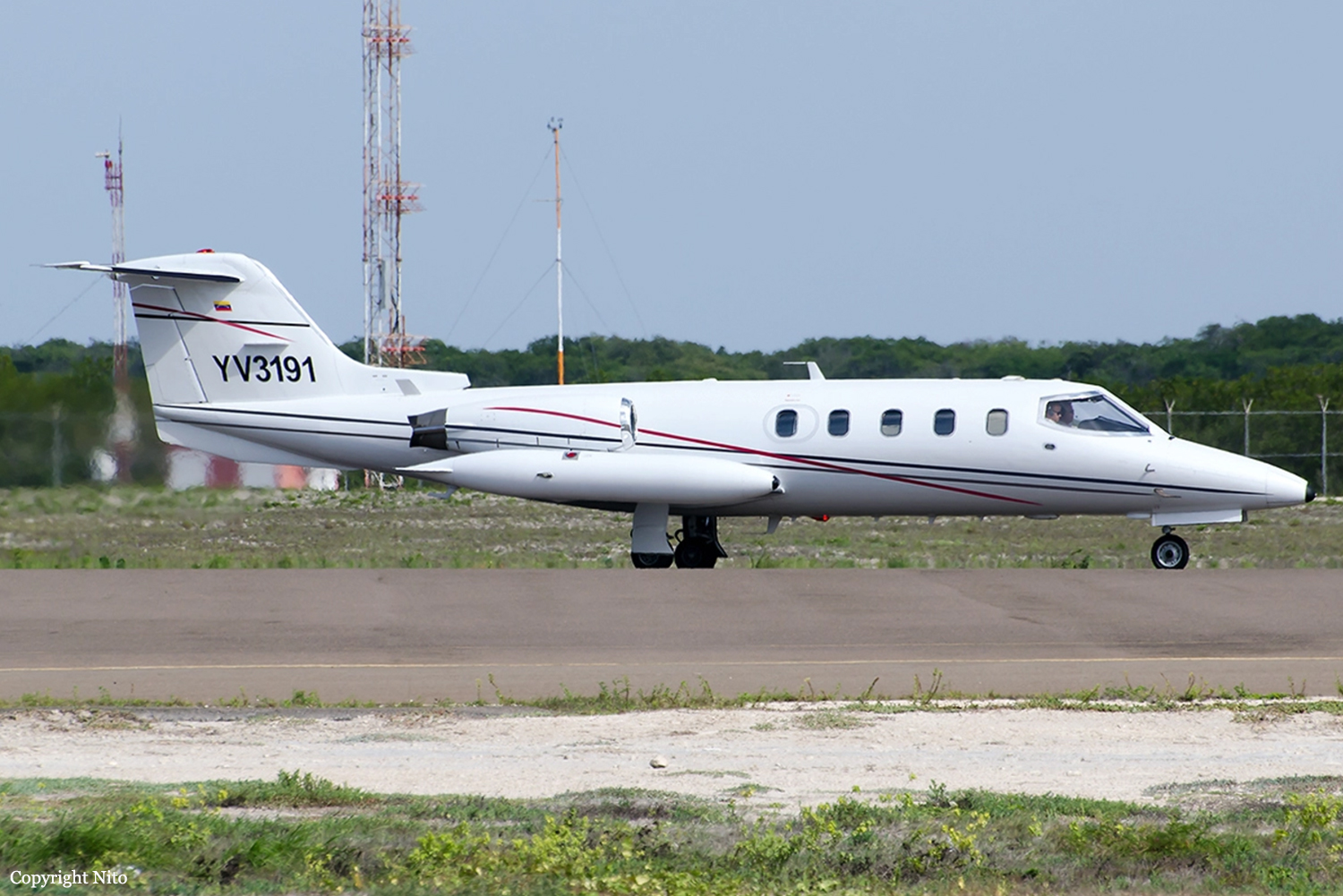 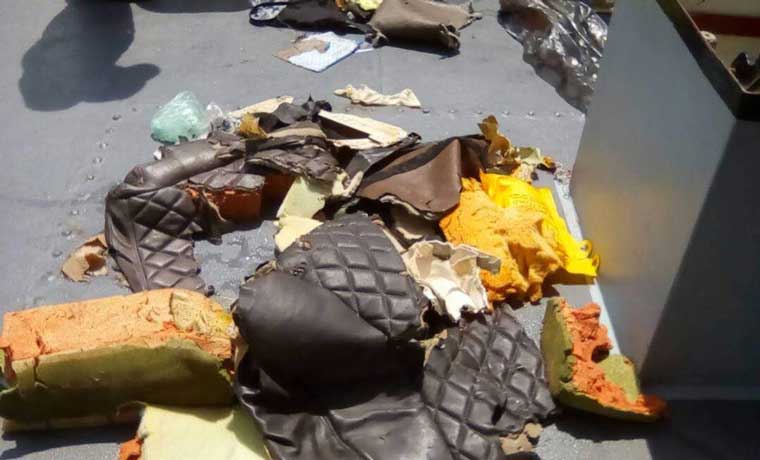 Registration:
XA-VMC
Flight Phase:
Takeoff (climb)
Flight Type:
Positioning
Survivors:
No
Site:
Airport (less than 10 km from airport)
Schedule:
Toluca - Durango
MSN:
25-114
YOM:
1973
Location:
Toluca
México
Country:
Mexico
Region:
Central America
Crew on board:
2
Crew fatalities:
Pax on board:
0
Pax fatalities:
Other fatalities:
Total fatalities:
2
Aircraft flight hours:
14654
Aircraft flight cycles:
13449
Circumstances:
During the takeoff roll on runway 15 at Toluca-Licendiado Adolfo López Mateos, after the airplane passed the V1 speed, the warning light came on in the cockpit panel, informing the crew about the deployment of the reverse on the left engine. According to published procedures, the crew continued the takeoff and shortly after rotation, during initiale climb, the aircraft rolled to the left and crashed in an open field, bursting into flames. The wreckage was found about 200 metres past the runway end. The aircraft was destroyed and both pilots were killed.
Probable cause:
Probable Cause:
Loss of control of the aircraft during the emergency procedure of indication of the deployment of the reverse of the engine number one during the takeoff roll above V1, which was consistent with the training and standard operating procedures that call to continue the takeoff, causing the collapse of the aircraft, by low speed and the operation of abrupt maneuvers and turns towards the engine side in idle position and commanded opening of the Drag Shut due to poor CRM.
Contributing factors:
- False indication of reverse display of dwelling position number one.
- Failure of pilots of previous flights not to refer failures to indicate the deployment of reverses for maintenance actions.
Final Report: 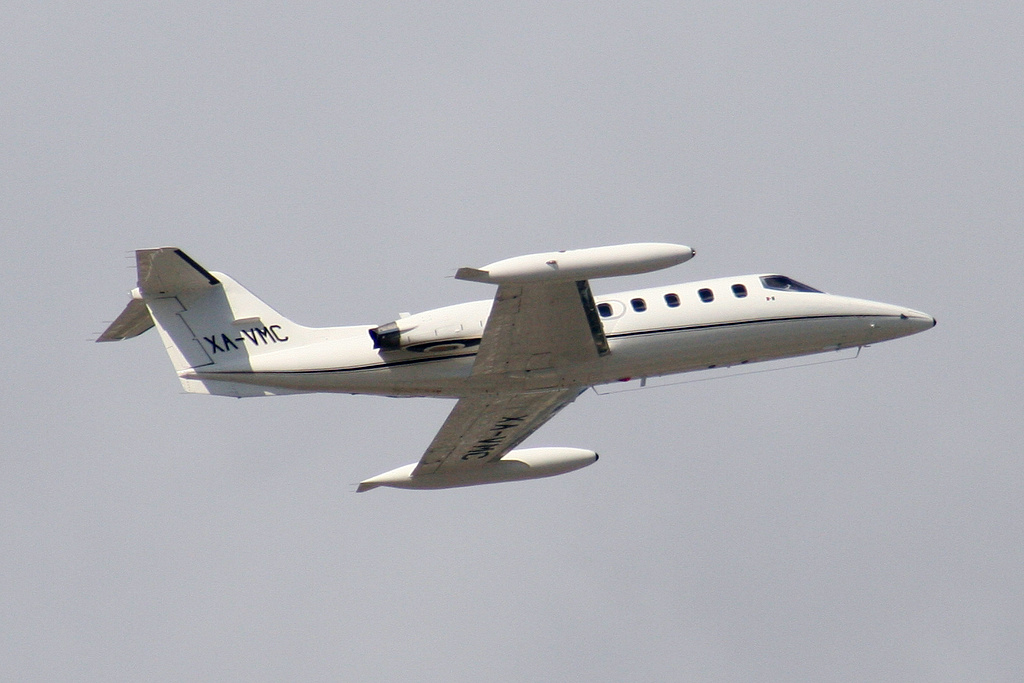 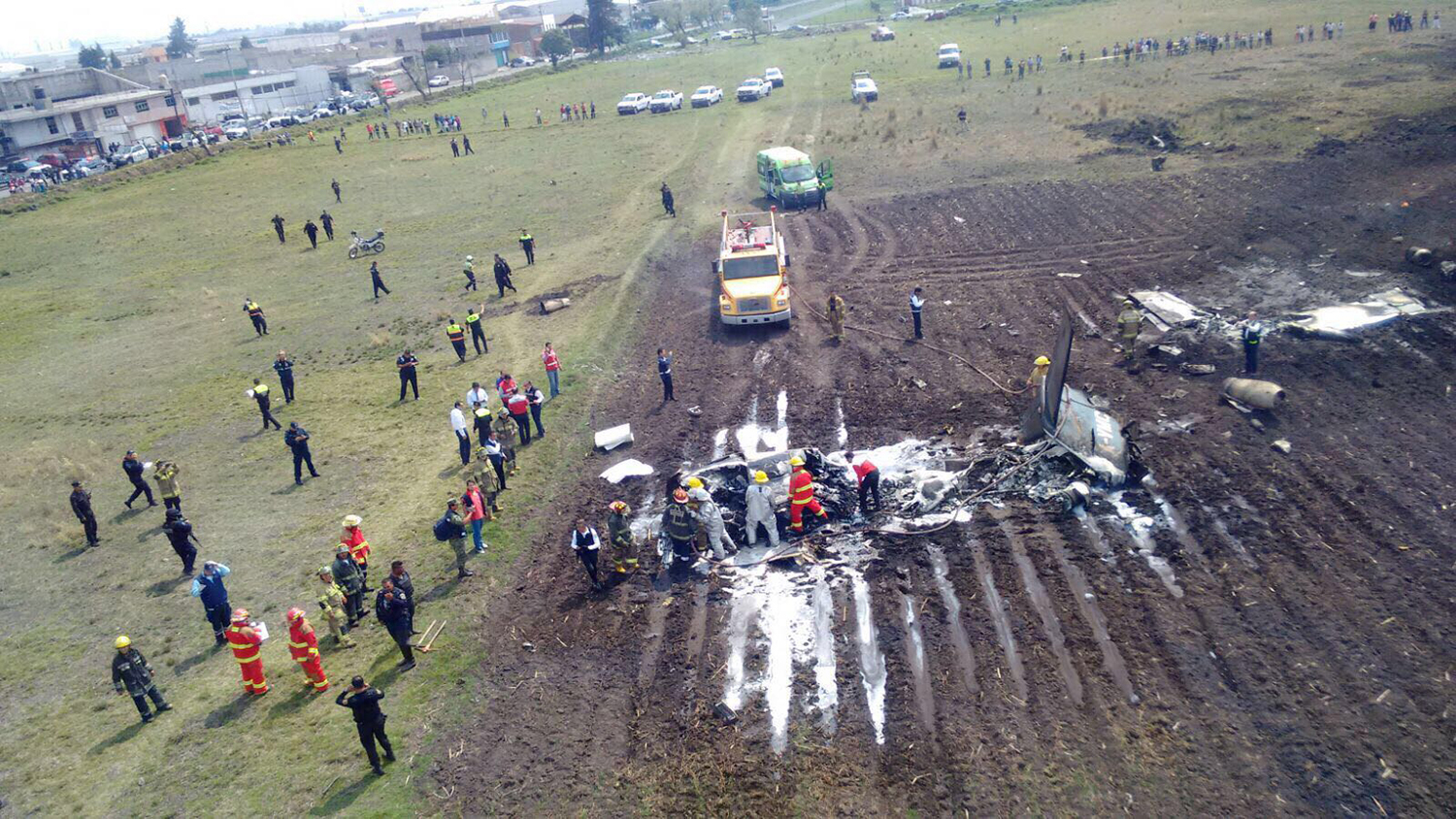 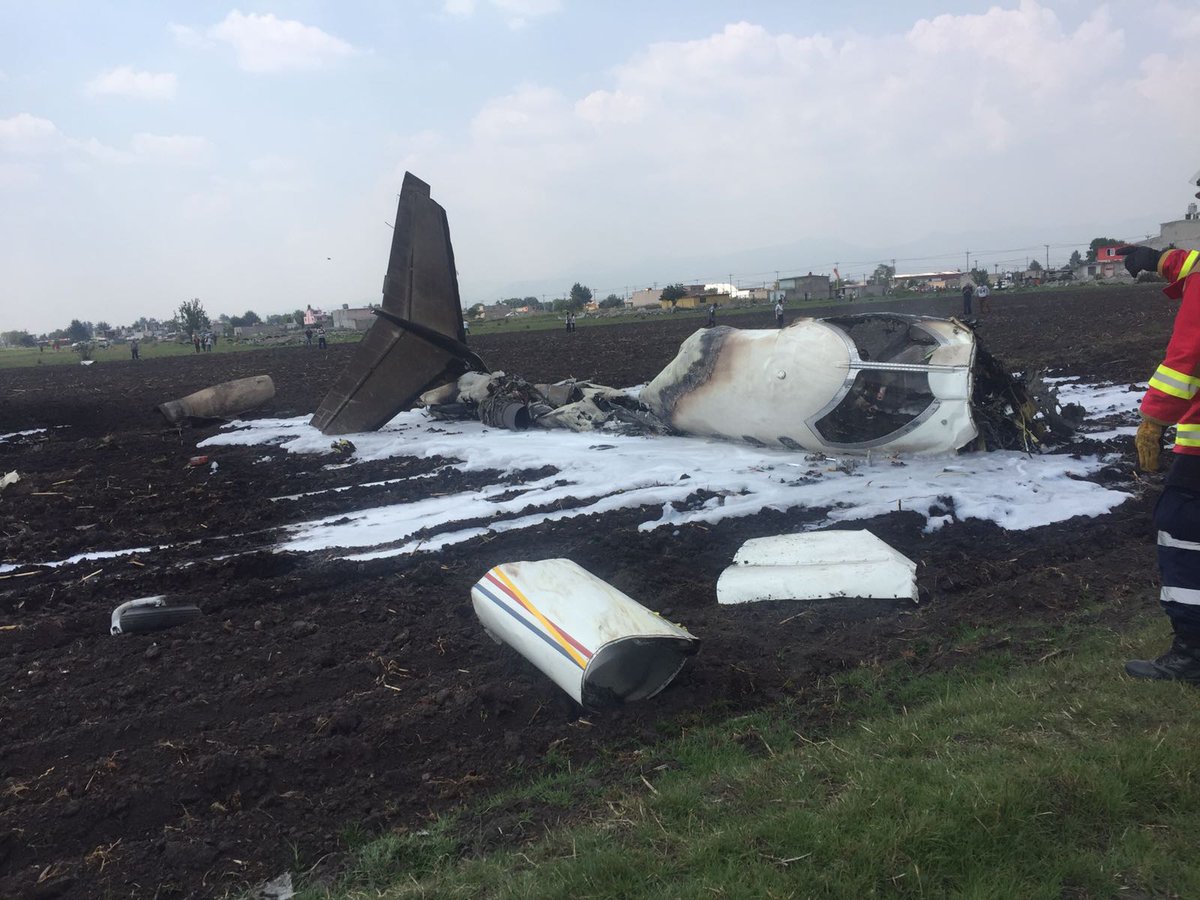 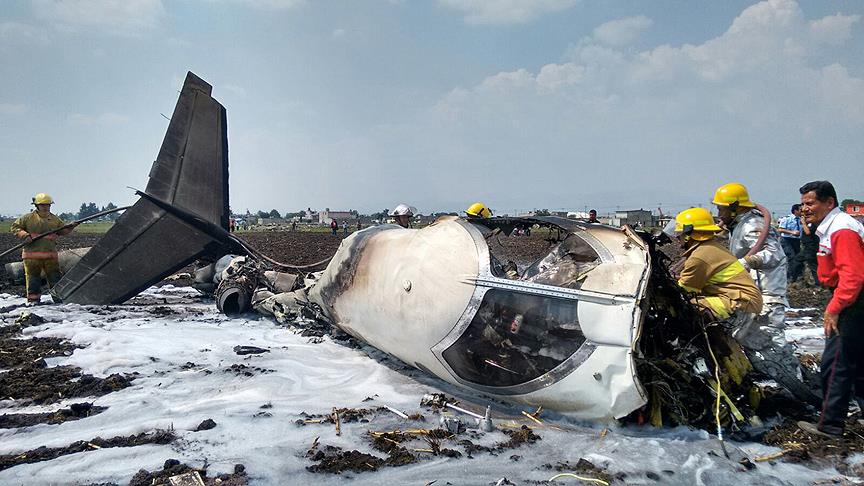 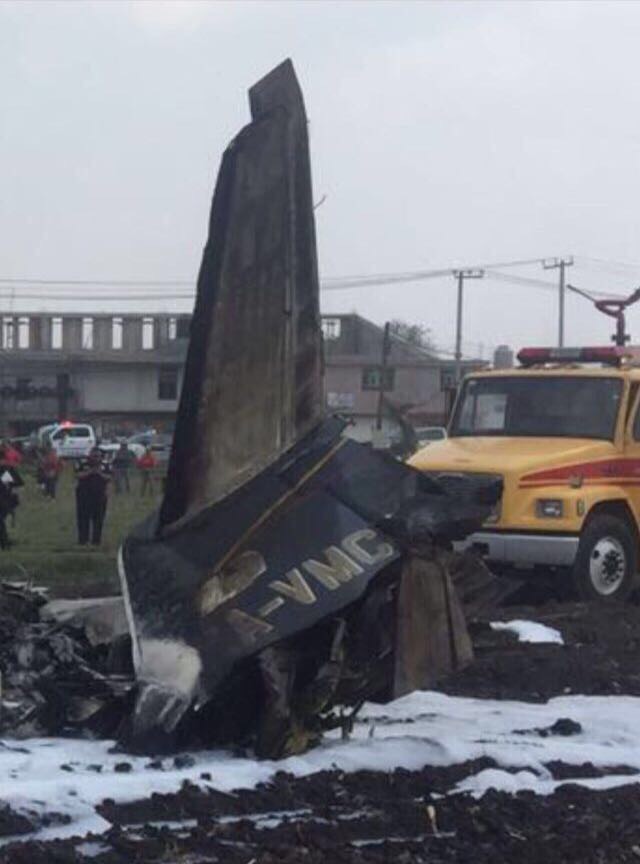 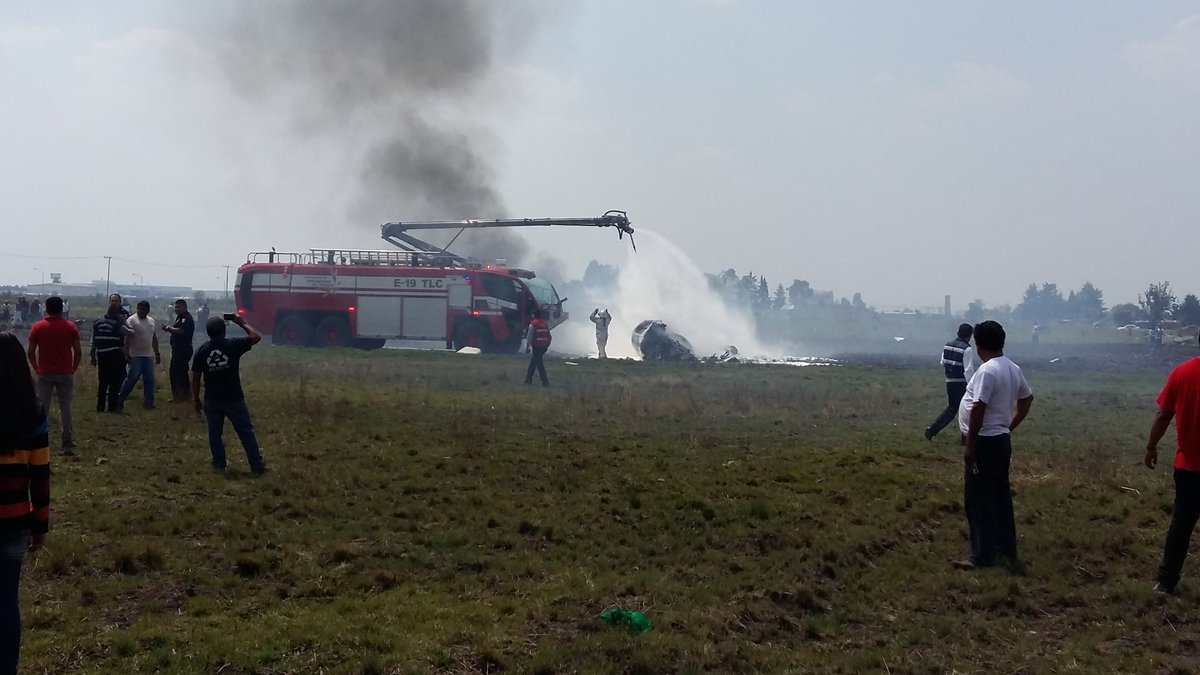 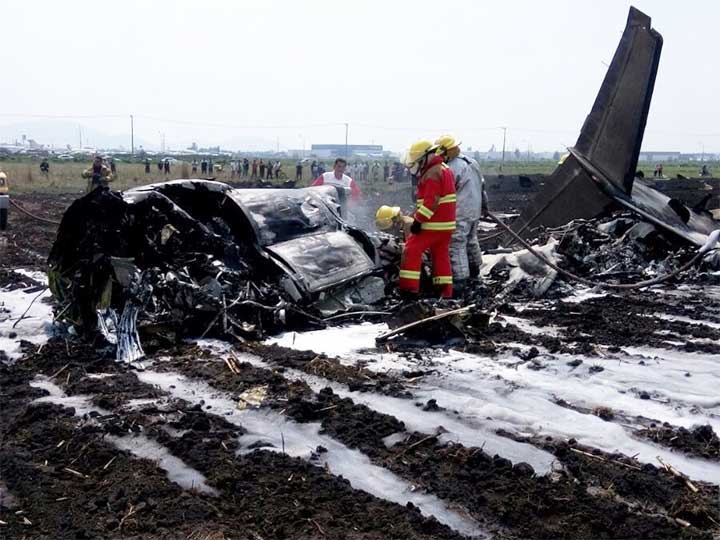 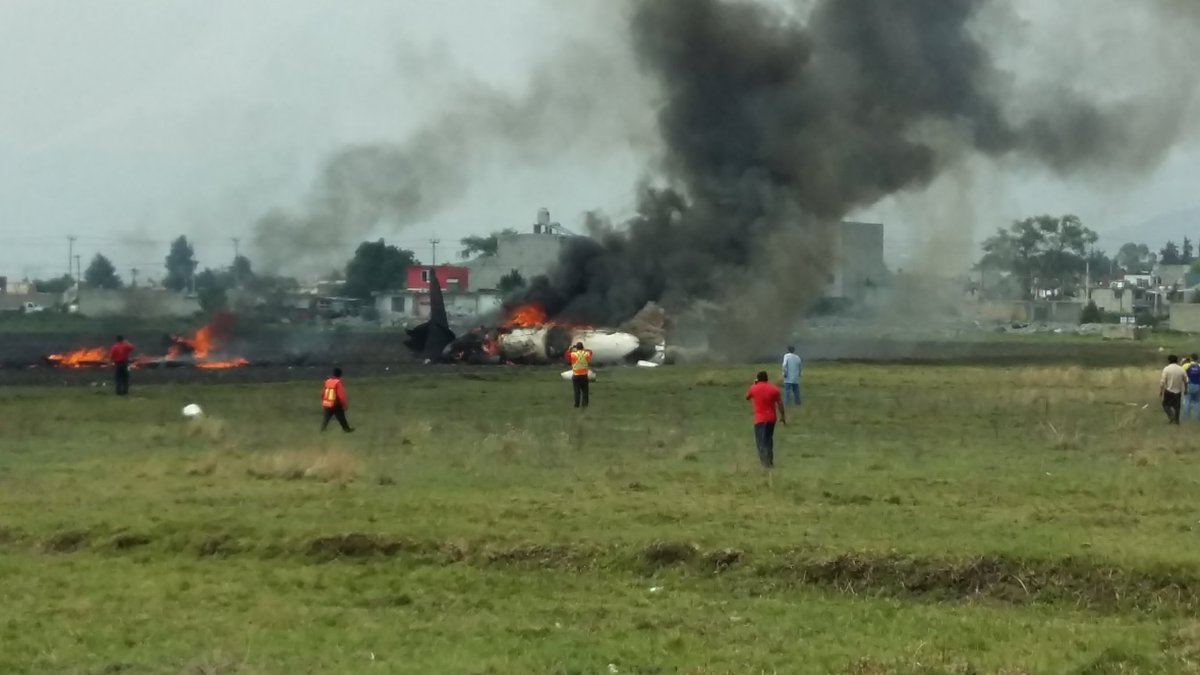 Type of aircraft:
Learjet 25
Operator:
T-Air - USA
Registration:
N265TW
Flight Phase:
Landing (descent or approach)
Flight Type:
Private
Survivors:
No
Site:
Plain, Valley
MSN:
265
YOM:
1979
Location:
Champotón
Campeche
Country:
Mexico
Region:
Central America
Crew on board:
2
Crew fatalities:
Pax on board:
0
Pax fatalities:
Other fatalities:
Total fatalities:
2
Circumstances:
The crew was performing a flight from Texas and the aircraft was carrying a load consisting of six fuel drums according to a Campeche daily newspaper. The Learjet 25D was flying at a very low altitude, maybe in an attempt to land, when it crashed and burned in an open field located in Champotón, some 40 km south of Campeche. Both crew members were killed. Illegal flight suspected. 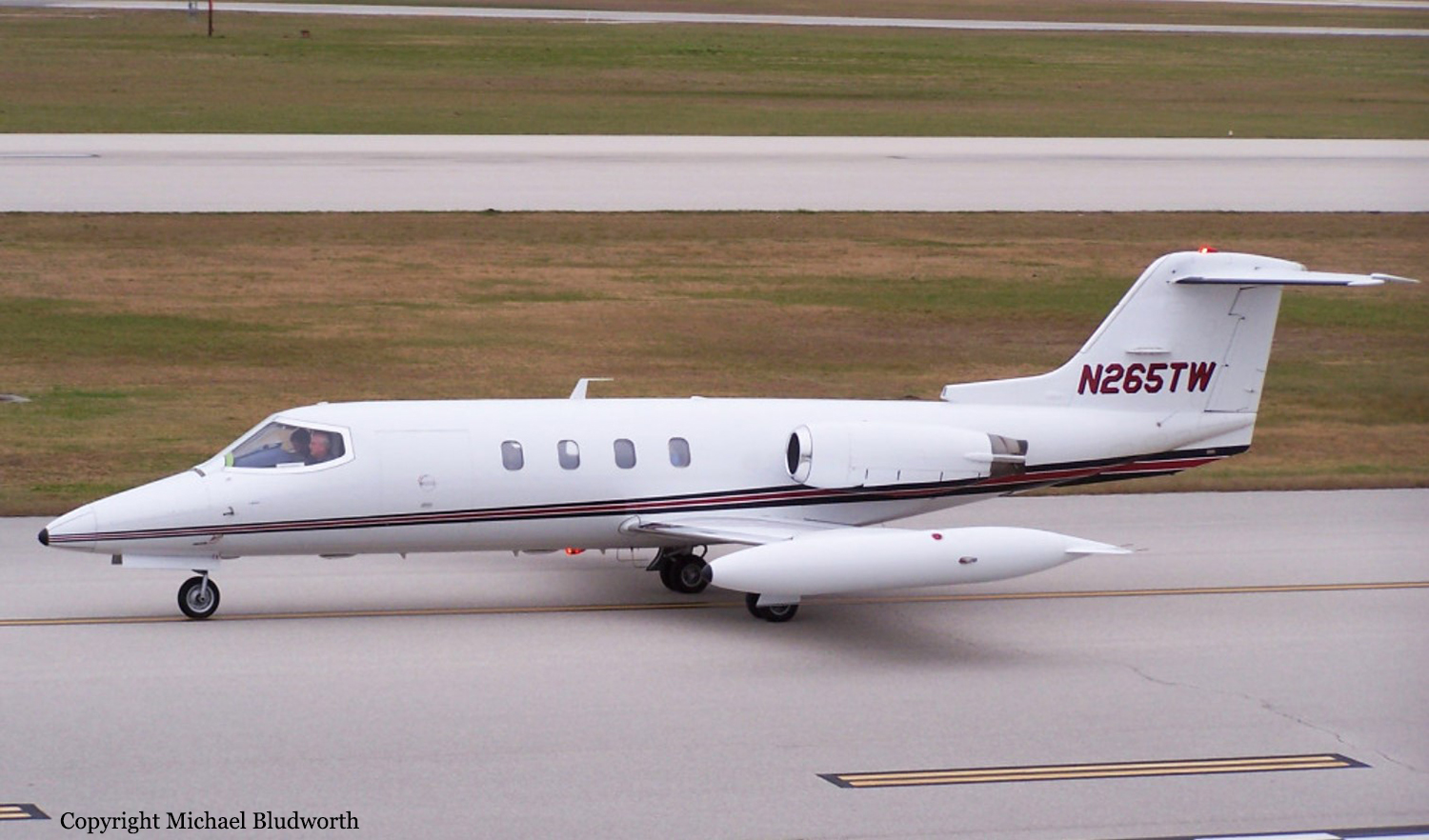 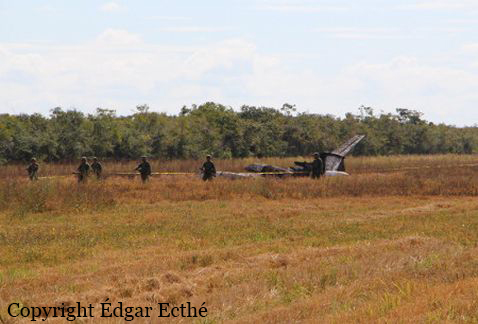 Type of aircraft:
Learjet 25
Operator:
Starwood Management
Registration:
N345MC
Flight Phase:
Flight
Flight Type:
Executive/Corporate/Business
Survivors:
No
Site:
Mountains
Schedule:
Monterrey - Toluca
MSN:
25-046
YOM:
1969
Location:
Iturbide
Nuevo León
Country:
Mexico
Region:
Central America
Crew on board:
2
Crew fatalities:
Pax on board:
5
Pax fatalities:
Other fatalities:
Total fatalities:
7
Captain / Total flying hours:
22610
Copilot / Total hours on type:
67
Circumstances:
The aircraft departed Monterrey-General Mariano Escobido Airport at 0315LT on a flight to Toluca, carrying five passengers and two pilots. Few minutes later, while cruising at 28,700 feet via radial 163, the aircraft went out of control, dove into the ground and crashed in a mountainous area located near Iturbide, in the south part of the Parque Natural Sierra de Arteaga, some 100 km south of Monterrey. Debris were found scattered on an area of approximately 300 metres and all seven occupants were killed, among them the American-Mexican singer Dolores Jenney Rivera, aged 43. She was accompanied with her impresario and members of her team. They left Monterrey after she gave a concert and they should fly to Toluca to take part to a TV show.
Probable cause:
The exact cause of the loss of control could not be determined. However, it was reported that the pilot aged 78 was not allowed to conduct commercial flight due to his age. Also, the young copilot aged 21 did not have a type rating for such aircraft.
Final Report: 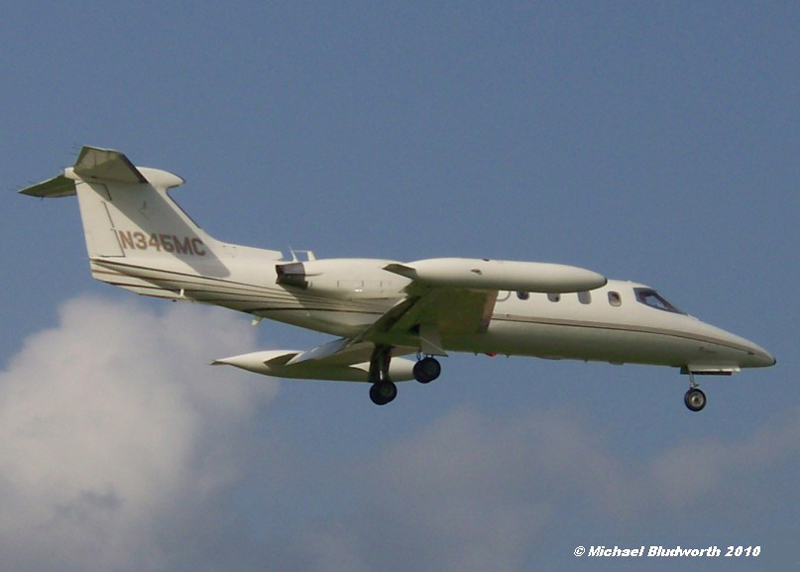 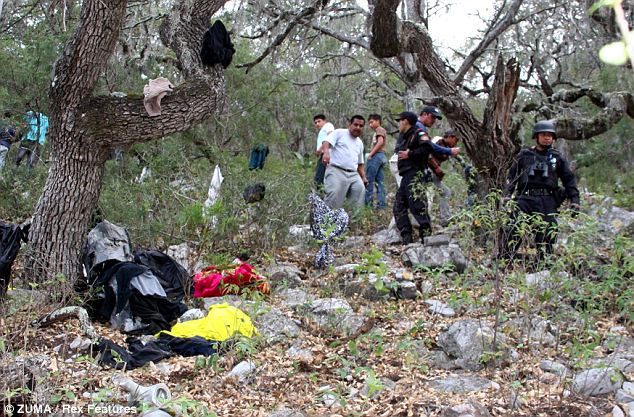 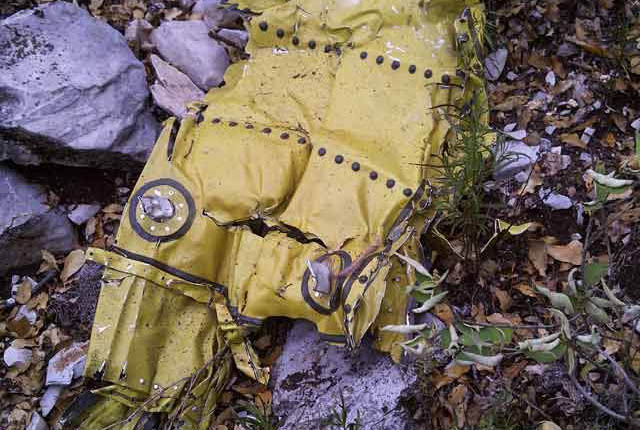 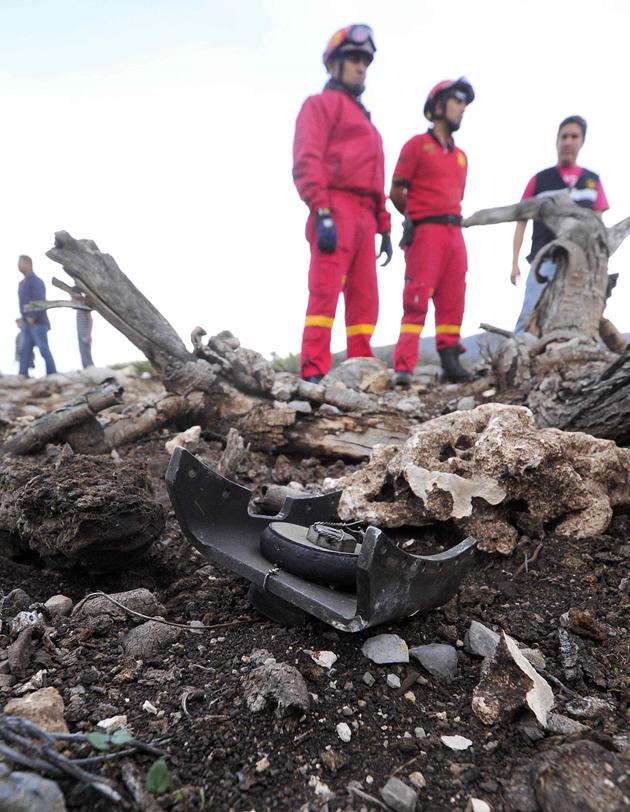 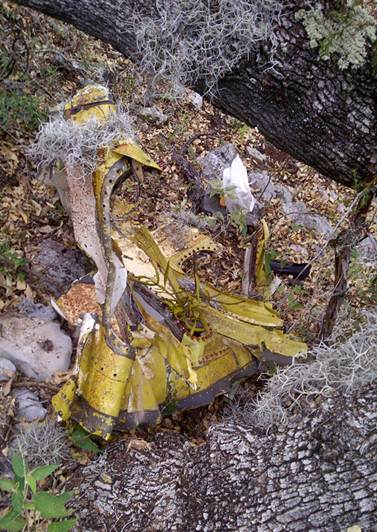 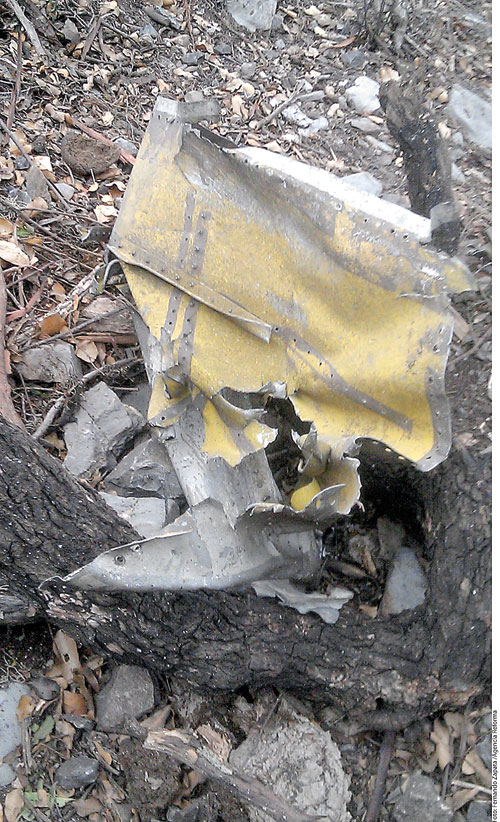 Registration:
N25PJ
Flight Phase:
Landing (descent or approach)
Flight Type:
Positioning
Survivors:
Yes
Site:
Airport (less than 10 km from airport)
Schedule:
Boise - Portland
MSN:
25-111
YOM:
1973
Location:
Portland-Hillsboro
Oregon
Country:
United States of America
Region:
North America
Crew on board:
2
Crew fatalities:
Pax on board:
0
Pax fatalities:
Other fatalities:
Total fatalities:
0
Captain / Total flying hours:
6000
Copilot / Total flying hours:
652
Copilot / Total hours on type:
10
Aircraft flight hours:
8453
Circumstances:
The airplane was flying a VOR/DME-C approach that was on an oblique course about 40 degrees to the runway 30 centerline; the wind conditions produced an 8-knot tailwind for landing on runway 30. Despite the tailwind, the captain elected to land on the 6,600-foot-long runway instead of circling to land with a headwind. Moderate to heavy rain had been falling for the past hour, and the runway was wet. The crew said that the airplane was flown at the prescribed airspeed (Vref) for its weight with the wing flaps fully extended on final approach, and that they touched down just beyond the touchdown zone. The captain said that he extended the wings' spoilers immediately after touchdown. He tested the brakes and noted normal brake pedal pressure. However, during rollout, he noted a lack of deceleration and applied more brake pressure, with no discernible deceleration. The airplane's optional thrust reversers had been previously rendered non-operational by company maintenance personnel and were therefore not functional. The captain stated that he thought about performing a go-around but believed that insufficient runway remained to ensure a safe takeoff. While trying to stop, he did not activate the emergency brakes (which would have bypassed the anti-skid system) because he thought that there was insufficient time, and he was preoccupied with maintaining control of the airplane. He asked the first officer to apply braking with him, and together the crew continued applying brake pedal pressure; however, when the airplane was about 2,000 feet from the runway's end, it was still traveling about 100 knots. As the airplane rolled off the departure end on runway 30, which was wet, both pilots estimated that the airplane was still travelling between 85 and 90 knots. The airplane traveled 618 feet through a rain-soaked grassy runway safety area before encountering a drainage swale that collapsed the nose gear. As the airplane was traversing the soft, wet field, its wheels partially sank into the ground. While decelerating, soil impacted the landing gear wheels and struts where wiring to the antiskid brake system was located. The crew said that there were no indications on any cockpit annunciator light of a system failure or malfunction; however, after the airplane came to a stop they observed that the annunciator light associated with the antiskid system for the No. 2 wheel was illuminated (indicating a system failure). The other three annunciator lights (one for each wheel) were not illuminated. During the approach, the first officer had completed the landing data card by using a company-developed quick reference card. The quick reference card’s chart, which contained some data consistent with the landing charts in the Airplane Flight Manual (AFM), did not have correction factors for tailwind conditions, whereas the charts in the AFM do contain corrective factors for tailwind conditions. The landing data prepared by the first officer indicated that 3,240 feet was required to stop the airplane on a dry runway in zero wind conditions, with a wet correction factor increasing stopping distance to 4,538 feet. The Vref speed was listed as 127 knots for their landing weight of 11,000 pounds, and the first officer’s verbal and written statements noted that they crossed the runway threshold at 125 knots. During the investigation, Bombardier Lear calculated the wet stopping distances with an 8-knot tailwind as 5,110 feet. The touchdown zone for runway 30 is 1,000 feet from the approach end. The crew’s estimate of their touchdown location on the runway is about 1,200 feet from the approach end, yielding a remaining runway of 5,400 feet. On-duty controllers in the tower watched the landing and said that the airplane touched down in front of the tower at a taxiway intersection that is 1,881 feet from the approach end, which would leave about 4,520 feet of runway to stop the airplane. The controllers observed water spraying off the airplane’s main landing gear just after touchdown. Post accident testing indicated that the brake system, including the brake wear, was within limits, with no anomalies found. No evidence of tire failure was noted. The antiskid system was removed from the airplane for functional tests. The control box and the left and right control valves tested within specifications. The four wheel speed sensors met the electrical resistance specification. For units 1, 2 and 3, the output voltages exceeded the minimum specified voltages for each of the listed frequencies. Unit 4 was frozen and could not be rotated and thus could not be tested. Sensors 1 and 2 exceeded the specified 15% maximum to minimum voltage variation limit. Sensor 3 was within the limit and 4 could not be tested. Based on all the evidence, it is likely that the airplane touched down on the water-contaminated runway beyond the touchdown zone, at a point with about 600 feet less remaining runway than the performance charts indicated that the airplane required for the wet conditions. Since a reverted rubber hydroplaning condition typically follows an encounter with dynamic hydroplaning, the reverted rubber signatures on the No. 2 tire indicate that the airplane encountered dynamic hydroplaning shortly after touchdown, and the left main gear wheel speed sensor anomalies allowed the left tires to progress to reverted rubber hydroplaning. This, along with postaccident testing, indicates that the anti-skid system was not performing optimally and, in concert with the hydroplaning conditions, significantly contributed to the lack of deceleration during the braking attempts.
Probable cause:
The failure of the flight crew to stop the airplane on the runway due to the flying pilot’s failure to attain the proper touchdown point. Contributing to the accident was an anti-skid system that was not performing optimally, which allowed the airplane to encounter reverted rubber hydroplaning, and the company-developed quick reference landing distance chart that did not provide correction factors related to tailwind conditions. 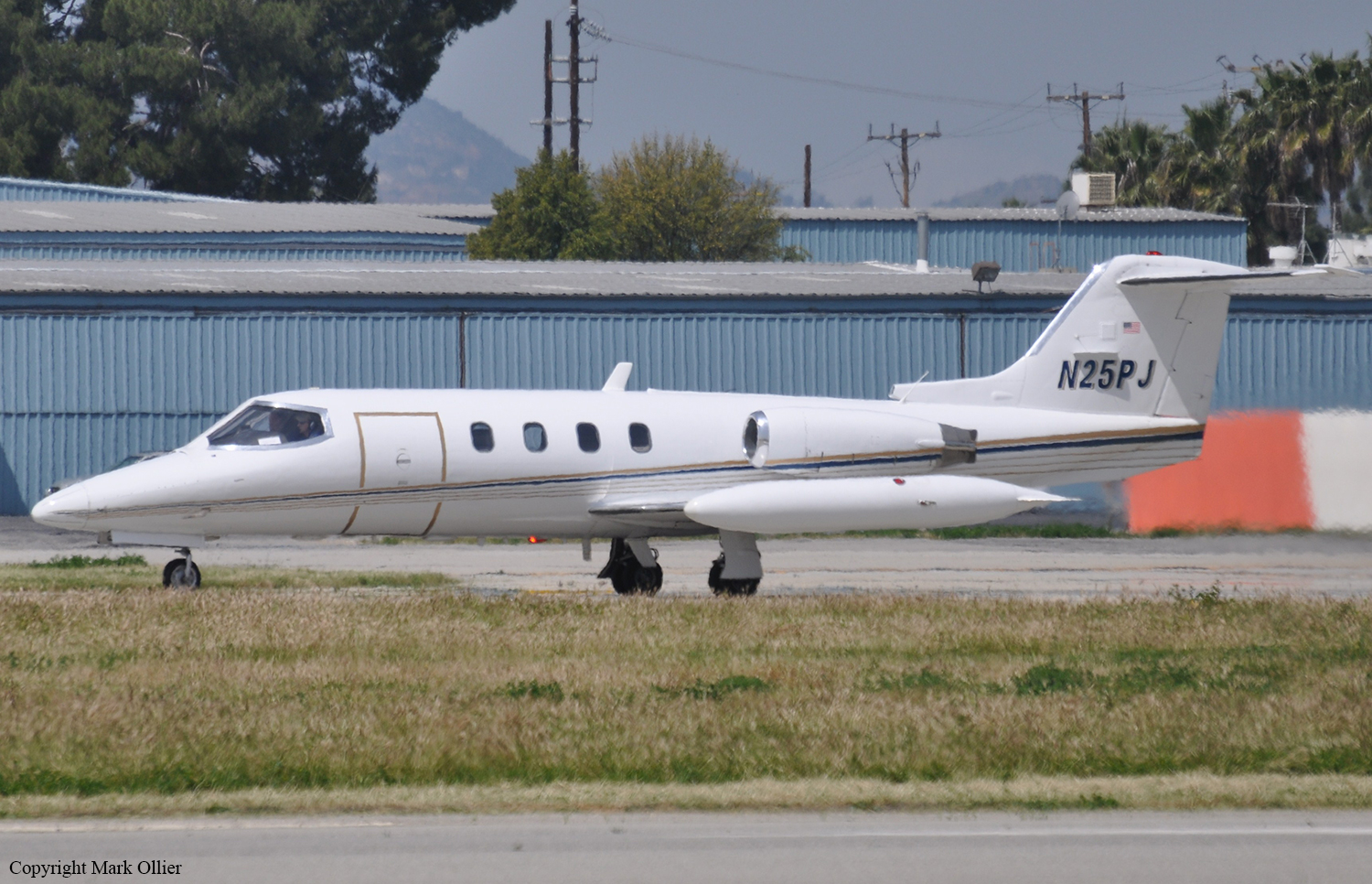 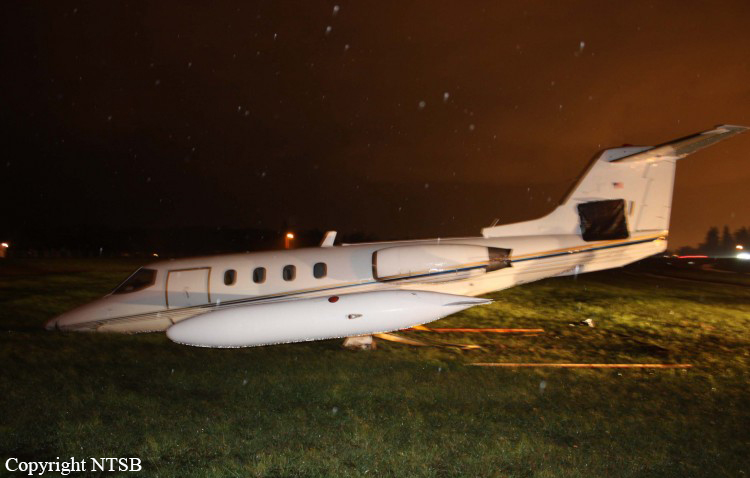 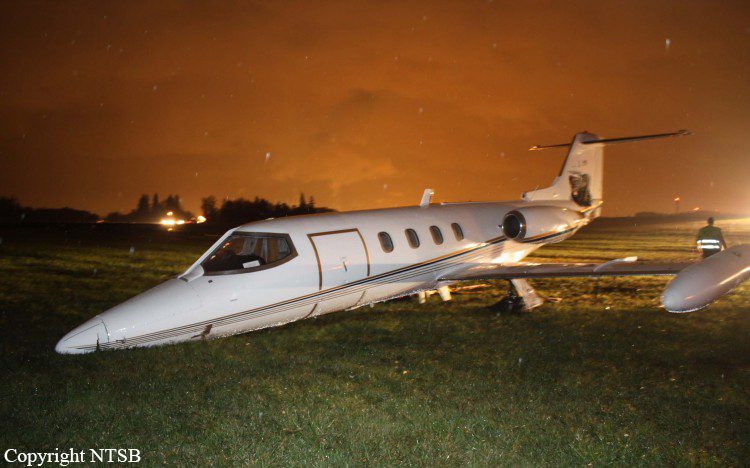 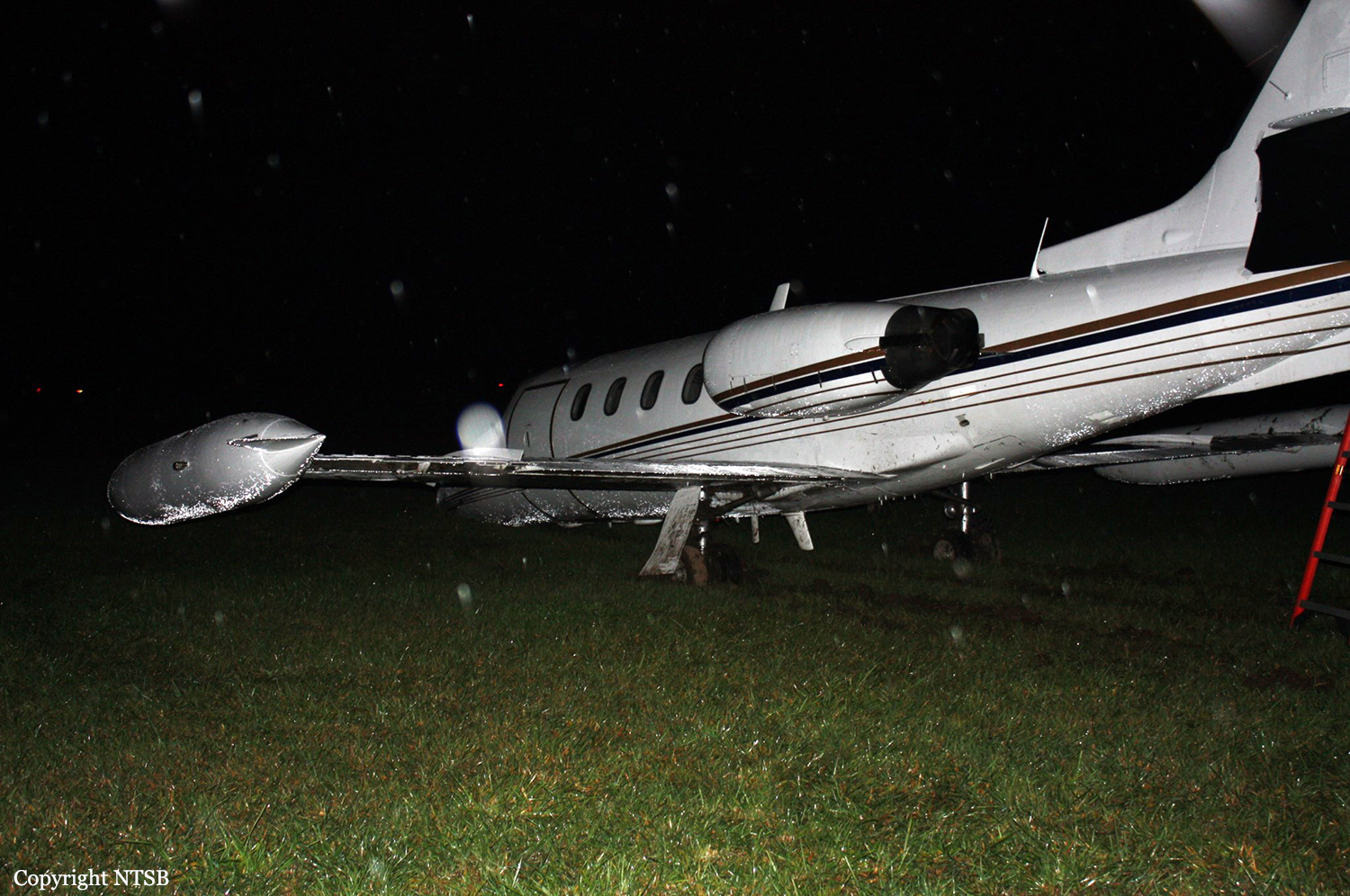