Crash of a Beechcraft B60 Duke in Oulu: 2 killed

Type of aircraft:
Beechcraft 60 Duke
Operator:
United Seafood
Registration:
N911SG
Flight Phase:
Landing (descent or approach)
Flight Type:
Private
Survivors:
Yes
Site:
Airport (less than 10 km from airport)
Schedule:
Bremerhaven – Oulu – Murmansk
MSN:
P-510
YOM:
1979
Location:
Oulu
Northern Ostrobothnia
Country:
Finland
Region:
Europe
Crew on board:
1
Crew fatalities:
Pax on board:
2
Pax fatalities:
Other fatalities:
Total fatalities:
2
Captain / Total flying hours:
2024
Captain / Total hours on type:
11.00
Aircraft flight hours:
3310
Circumstances:
The aircraft registered N911SG arrived in Oulu on a private flight from Bremerhaven, Germany (EDWB) on 20 December 1994, with the intention to continue the flight to Murmansk, Russia (ULMM). Landing time at Oulu airport was 15.03. The aircraft had one passenger in addition to the pilot-in-command and a representative of the operator company, who had been marked as a crew member. After the landing the pilot-in-command contacted air traffic control by radio and told that the aircraft needed refuelling, without mentioning the fuel type required. The ATC officer transmitted the information by telephone to the fuel company, saying that the aircraft would take JET. According to the delivery receipt, the aircraft was refuelled with 664 litres of jet fuel, JET A-1, whereas the proper fuel type for the aircraft would have been AVGAS 100LL. The aircraft was refuelled on a stand situated in front of the terminal building. The fuel was delivered by a tanker car used only for JET A-1 refuelling and equipped with labels clearly indicating the fuel type. The representative of the aircraft operator/possessor company, who had been registered as a crew member in the aircraft log book, was present during refuelling, and the tanks were filled up according to his instructions on the quantity of fuel needed. He also accepted the fuel sample presented to him and signed the delivery receipt. He paid for the fuel in cash. The fuel tanks had not been marked with the minimum fuel grade of aviation gasoline used, as provided for in the airworthiness requirements. The filling orifices were equipped with restrictors in order to prevent jet fuel nozzles from going in and thus to prevent incorrect refuelling. The tanker car replenishment nozzle had been manufactured with an expansion, which had been shaped and dimensioned to fulfil the requirements set for jet fuel nozzles in different standards. The expansion is intended to prevent jet fuel nozzles from fitting into the orifices of aviation gasoline tanks. However, after the expansion the nozzle tip had been shaped as a Camlock coupling, which was smaller in dimension than the expansion and thus fitted into the reduced filling orifices, making it possible to fill the aviation gasoline tanks with jet fuel. During refuelling, the pilot-in-command visited meteo and paid for the landing. The aircraft had an IFR flight plan drawn up by the pilot-in-command for the continued flight from Oulu to Murmansk. According to the plan, flight time was one hour and 35 minutes, alternate aerodrome Ivalo (EFIV) and endurance 5 hours. The aircraft left for this planned flight from Oulu, runway 30, at 16.19. It had been cleared to Murmansk and to climb after take-off to FL 160 with a right turn. According to the ATC officer who had monitored the take-off, the gradient of climb was rather low. Four minutes after take-off the ATC officer gave the departure time to the aircraft and asked the crew to change over to Rovaniemi Area Control Centre radio frequency. The crew acknowledged the frequency. Without contacting Rovaniemi ACC the crew called again at Oulu ATC frequency at 4 min 47 sec after take-off, stating that they wanted to return to the airport because they were having some problems. The ATC officer cleared the aircraft to call on final 12. Approximately 10 seconds after this transmission the ATC officer asked whether any emergency equipment was needed, and the answer was negative. At 16.25.25, when the ATC officer asked if the crew had the field in sight, the crew confirmed this and reported that their DME distance was 6 nm. At 16.26.11 the crew called mayday, stating that both engines were stopping. At 16.26.38 the mayday call was repeated and emergency landing reported. Rovaniemi ACC monitored the aircraft by radar, and the last reliable radar contact was established at 16.26.30. On the basis of recorded radar data, the crash site was estimated to be approximately 1 NM from Laanila NDB, in the direction of 60°. Rescue units found the aircraft in a forest at 17.06. It had struck into trees, turned upside down and been destroyed. The aircraft door was shut and the occupants were still inside. The passenger on the back seat had been thrown away from his seat and was found dead at the accident site. The pilot-in-command was on the left front seat, seriously injured and unconscious, with his seat belt fastened (he died from his injuries 10 days later on December 30). The right crew seat occupant was injured but conscious, and his seat belt was fastened as well. It came out during the investigation that he was actually a passenger.
Probable cause:
The accident was caused by incorrect refuelling. This was made possible by a series of human errors, which together with the fact that the technical defences failed, permitted the aircraft to be refuelled with Jet A-1 instead of Avgas 100LL. The incorrect fuel caused knocking, which resulted in engine damage and eventual stopping of both engines.
Final Report: 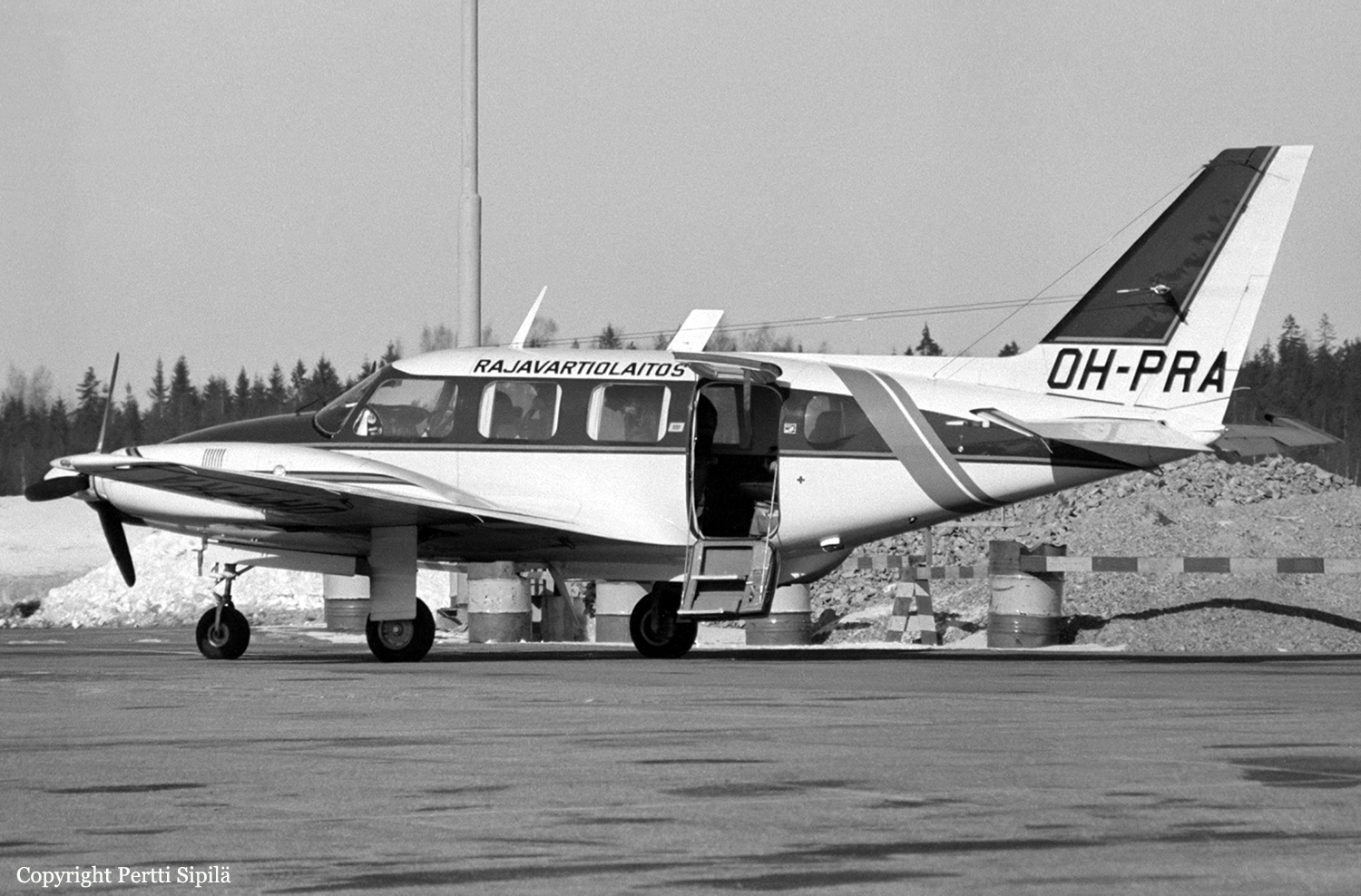 Crash of a Cessna 404 Titan II in Ylivieska 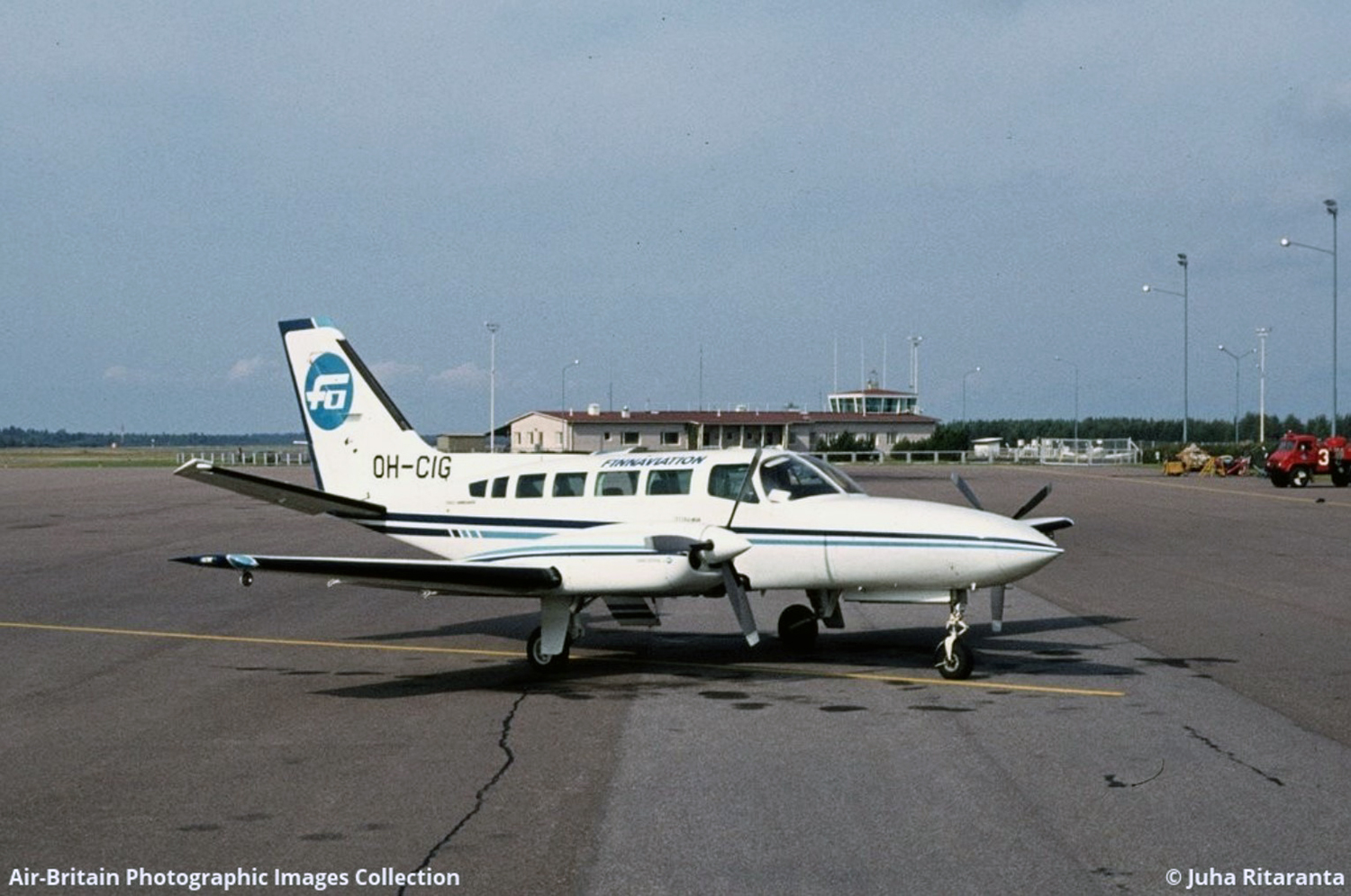 Crash of a Rockwell Aero Commander 500B in Oulu: 1 killed 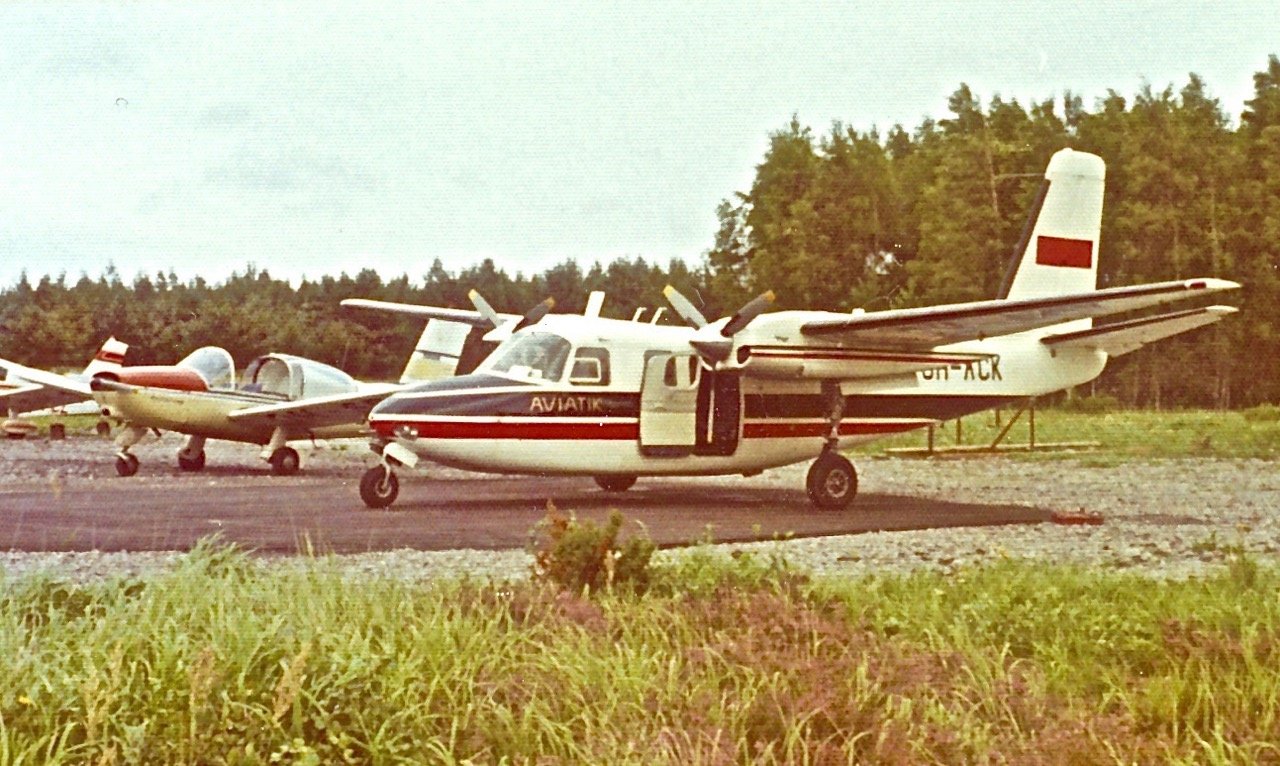 Registration:
OH-KOA
Flight Phase:
Flight
Flight Type:
Scheduled Revenue Flight
Survivors:
Yes
Site:
Plain, Valley
Schedule:
Oulu - Kuusamo
MSN:
166
YOM:
1968
Flight number:
KR482
Location:
Pudasjärvi
Northern Ostrobothnia
Country:
Finland
Region:
Europe
Crew on board:
3
Crew fatalities:
Pax on board:
15
Pax fatalities:
Other fatalities:
Total fatalities:
0
Aircraft flight hours:
3128
Circumstances:
Kar-Air flight KR482 took off from Oulu Airport, Finland on a scheduled domestic service to Kuusamo. The aircraft climbed to FL70 and initially flew above the cloud layer. Before the aircraft started descent, it had been informed on the radio of the prevailing weather at Kuusamo Airport: surface wind 160°, 6 KT occasionally 10 KT, visibility 10 km, clouds 8/8 1000 feet, temperature -7°C, QNH 989 mb. After the aircraft had left its cruising level at approximately 07:24 GMT it entered icing conditions in clouds between 6000 and 5000 feet. When approaching 3000 feet, the right engine of the aircraft suddenly lost its power. The crew immediately feathered the right-hand propeller, changed to single-engine flight and turned back in the direction of Oulu while informing Kuusamo Airport ATC about the incident. Kuusamo ATC cleared the aircraft to FL 60 for the return flight to Oulu. The crew reported that the flight back to Oulu would last one hour and at the same time stated that the climbing performance of the aircraft did not permit a climb to the planned FL 60. The crew asked for FL 30 as its flight altitude and was cleared to that level by the ATC. After the engine failure the pilot-in-command had intended to climb to FL 60, where flight in clear air and without the danger of icing had been possible. Because of the icing of the aircraft, its climbing performance when flying on one engine had, however, not been sufficient for a climb to FL 60. The aircraft had been able to climb about 700 feet to reach an altitude of appr. 3700 feet but was incapable of increasing the altitude above that level. The aircraft had continued its flight in the direction of Oulu but began to continually lose altitude because of increased icing in spite of the engine power being used in the left engine exceeding the maximum continuous thrust values. The aircraft had at the end of the flight been given an estimation of the altitude of the prevailing cloudbase in the region, which was reported to be 300-500 feet. As the loss of height continued, the crew had hoped that they would get below the cloudbase and the ice formed on the aircraft would fall off or that they would be able to make a landing in the terrain choosing a suitable place for emergency landing. However, the weather in the region had been such that there was practically no clearance between the clouds and the terrain. The aircraft had lost so much height by the time it had arrived at the area of Naamanka village in Pudasjarvi parish that the first landmark the co-pilot had seen had been a trigonometric tower which the aircraft passed over by only a few metres. About three kilometres after the passing of the tower, while the pilot-in-command was trying to pick out a landing place and having difficulties to control the aircraft, it had at 08:04 GMT struck the trees and hit the ground in a swampy, sparsely wooded area 5 km north of Linattijarvi. As a result of the impact three persons were quite badly injured while the others received only minor injuries, contusions, and bruises, and the aircraft was destroyed beyond repair.
Source: ASN
Probable cause:
The main reason for the aircraft accident has been the sudden breakdown of the turbine of the right engine so that the engine has lost its power and flight on one engine in icing conditions has become inevitable. The icing on the wet surfaces of the aircraft which lacked de-icing and anti-icing equipment and the consequent deterioration in the performance of the aircraft was decisively contributory to the accident. The performance of the aircraft when flying on one engine has been insufficient after the icing had taken place considering the weight of the aircraft at the time of the accident. 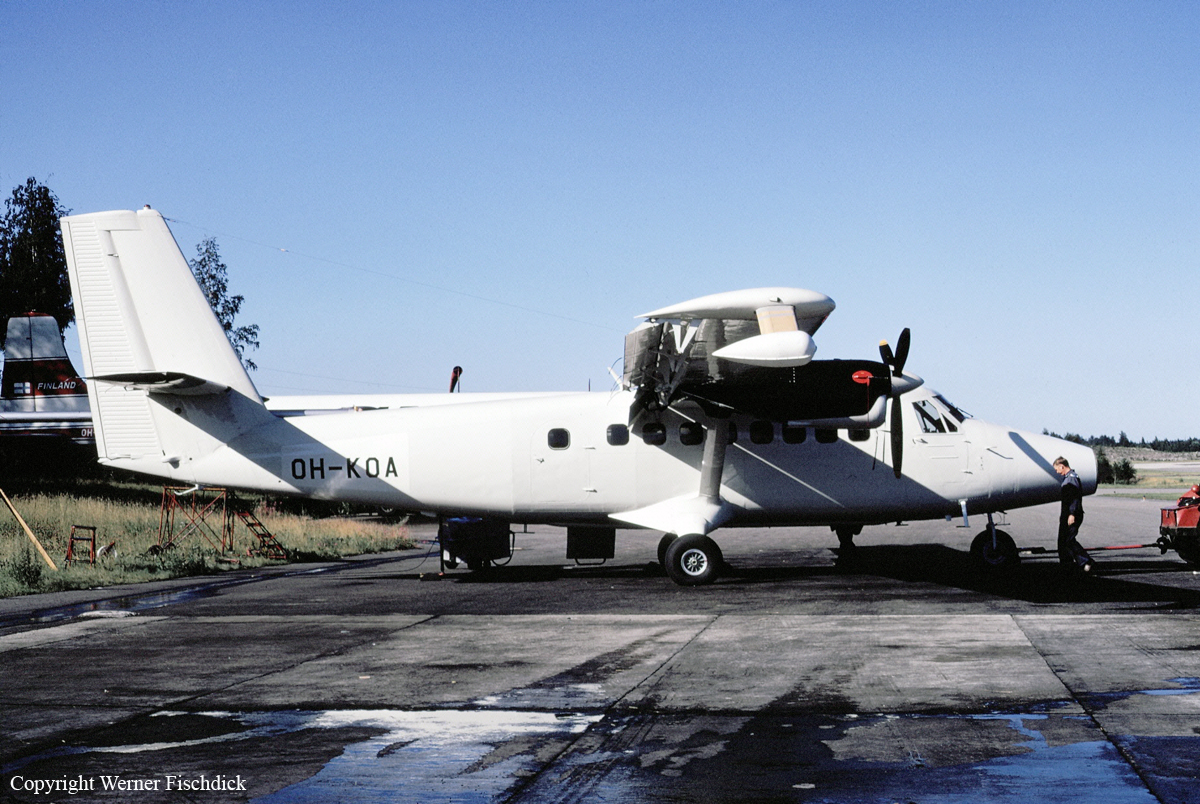 Crash of an Airspeed AS.10 Oxford I in Oulainen 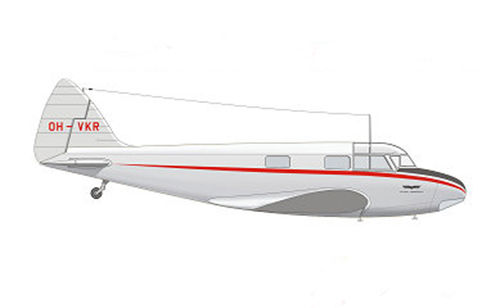