Registration:
SX-SKY
Flight Phase:
Landing (descent or approach)
Flight Type:
Scheduled Revenue Flight
Survivors:
Yes
Site:
Airport (less than 10 km from airport)
Schedule:
Rhodes – Heraklion
MSN:
829
YOM:
1988
Flight number:
SEH103
Location:
Heraklion
Crete / Κρήτη
Country:
Greece
Region:
Europe
Crew on board:
3
Crew fatalities:
Pax on board:
15
Pax fatalities:
Other fatalities:
Total fatalities:
0
Captain / Total flying hours:
24000
Captain / Total hours on type:
570.00
Copilot / Total flying hours:
1800
Copilot / Total hours on type:
250
Aircraft flight hours:
13222
Aircraft flight cycles:
15349
Circumstances:
Flight SEH102/103 of 12 February 2009 was a scheduled passenger carrying flight performing the route Heraklion – Rhodes – Heraklion. The crew that was going to perform the flight reported for duty at 16:00 h. The aircraft had earlier on the same day performed, with a different flight crew, four routes (Heraklion – Rhodes – Heraklion and Heraklion – Samos – Heraklion), without any problems being reported. Nothing had been observed during the pre-flight check. The aircraft departed Heraklion at 16:55 h and landed at Rhodes at 17:35 h without incident. At 18:30 h the aircraft departed Rhodes for Heraklion, carrying three crew members and 15 passengers. The pilot flying (PF) this particular sector was the Pilot in Command (PIC). At a distance of 30 nm from Heraklion and at a altitude of 7700 ft on its descent to 3000 ft, the crew informed the Air Traffic Control that it had the runway in sight and requested and was granted clearance to perform a visual approach. The aircraft, fully configured for landing from a distance of 7nm, approached the airport for landing at runway 27. The wind information provided by the Air Traffic Control was 18 kt – 25 kt, from 210°. While approaching the runway, the PF asked the First Officer (FO) to check the angle of descent based on the APAPIs’ of the runway. The FO confirmed the correct angle of descent, saying “one white, one red”. The aircraft crossed the threshold with a speed of 112 kt and after flaring the PF reduced speed to Flight Idle and touched down with a speed of 86 kt. As the speed was being gradually reduced, the PF had difficulty with controlling the aircraft along its longitudinal axis and noticing that the aircraft was leaning somewhat to the right, reported to the FO that “the gear has broken”. Immediately afterwards, the blades of the right propeller of the aircraft struck the runway. As the aircraft continued to move with the left main landing gear wheel operating normally and the collapsed right main landing gear, folded backwards under the wing, being dragged along the runway, the crew stopped the engines, reported to the Airport Control Tower that the right landing gear had broken and requested evacuation. The aircraft stopped in the runway with its nose wheel at 4.6 m to the right of the center line, at a distance of 930 m from the point of the propeller’s first contact with the runway. Immediately afterwards the PF ordered the cabin crew to open the cabin door and evacuated the aircraft, and the FO, who observed some fuel leaking from the right engine, switched off the electrical systems and requested through the Airport Control Tower that the fire trucks, which were on their way, to throw foam on the right wing to prevent any fire being started. The passengers disembarked from the left aft door without any problems with the assistance of the cabin crew, while the fire trucks covered the right wing with foam as a preventive measure. The airport, applying the standing procedures, removed the aircraft and released the runway for operation at 22:30 h. During the period of time that runway 09/27 remained out of operation, two flights approaching the airport for landing were diverted to Chania Airport, and the departures of another three flights were delayed.
Probable cause:
CONCLUSIONS
Findings:
- The flight crew met all the requirements for the performance of the flight.
- The aircraft was airworthy.
- The aircraft’s landing gears have a life of 50,000 cycles (landings) and the interval between two overhauls is six years or 10,000 cycles, whichever comes sooner.
- The fractured landing gear had completed 23,940 cycles since new and had been subjected to an overhaul on 17.09.08. Since then and as of the date of the accident it had completed 148 cycles.
- The aircraft manufacturer had issued an SB, and the UK Civil Aviation Authority an AD, asking for tests and inspection applicable to Region “A” of the main landing gear cylinders.
- Said AD had been carried out without findings in the course of the landing gear overhaul of 17.09.08 by an EASA-Part 145 approved maintenance organization.
- On 02.01.09 a visual inspection of Region “A” of the main landing gear cylinders was carried out by the aircraft operator’s maintenance organization, in accordance with Part B of the SB, again without findings.
- On 07.02.09 and in the morning of 12.02.09 the aircraft made ‘heavy’ landings considering that vertical acceleration values of 2.8 g and 2.5 g, respectively, had been recorded. None of these landings had been recorded in the aircraft’s log in order to trigger the inspection prescribed in the aircraft’s maintenance manual after a ‘heavy’ landing.
- According to the technical examination of the fractured parts, the first crack developed in Region “A” (fracture surface “A2-B2”) increasing the loading upon the cylinder material surrounding the threaded fasteners, sites of stress concentration. The second and third cracks then initiated at the site of stress concentration and propagated within the cylinder to form fracture surfaces “A1” - “B1” in the region surrounding the threaded fasteners. The cracks and the fracture resulted from the ductile overload of the undercarriage cylinder which is likely to have resulted from a ‘heavy’ landing made by the aircraft.
Probable Causes:
Landing gear cylinder failure because of ductile overload resulting from a ‘heavy’ landing made by the aircraft.
Final Report: 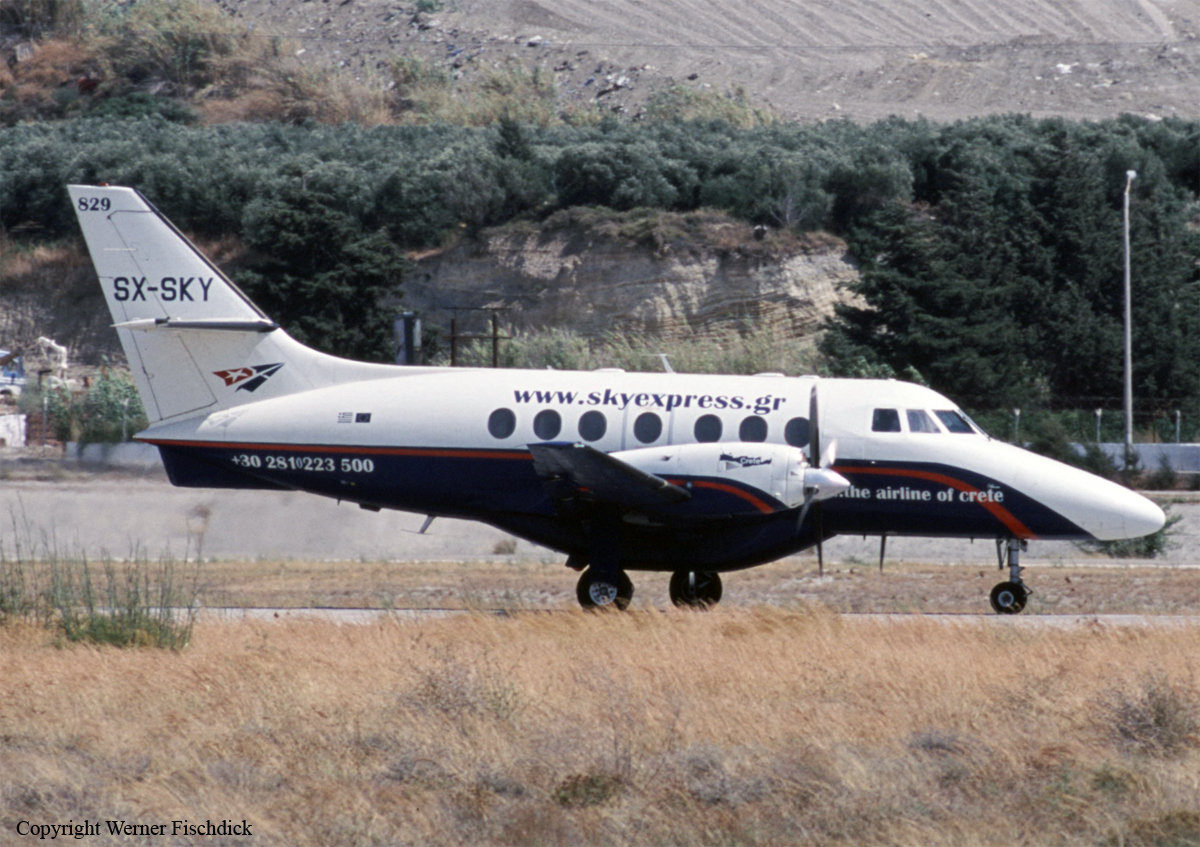 Crash of a Lockheed EP-3E Orion in Chania 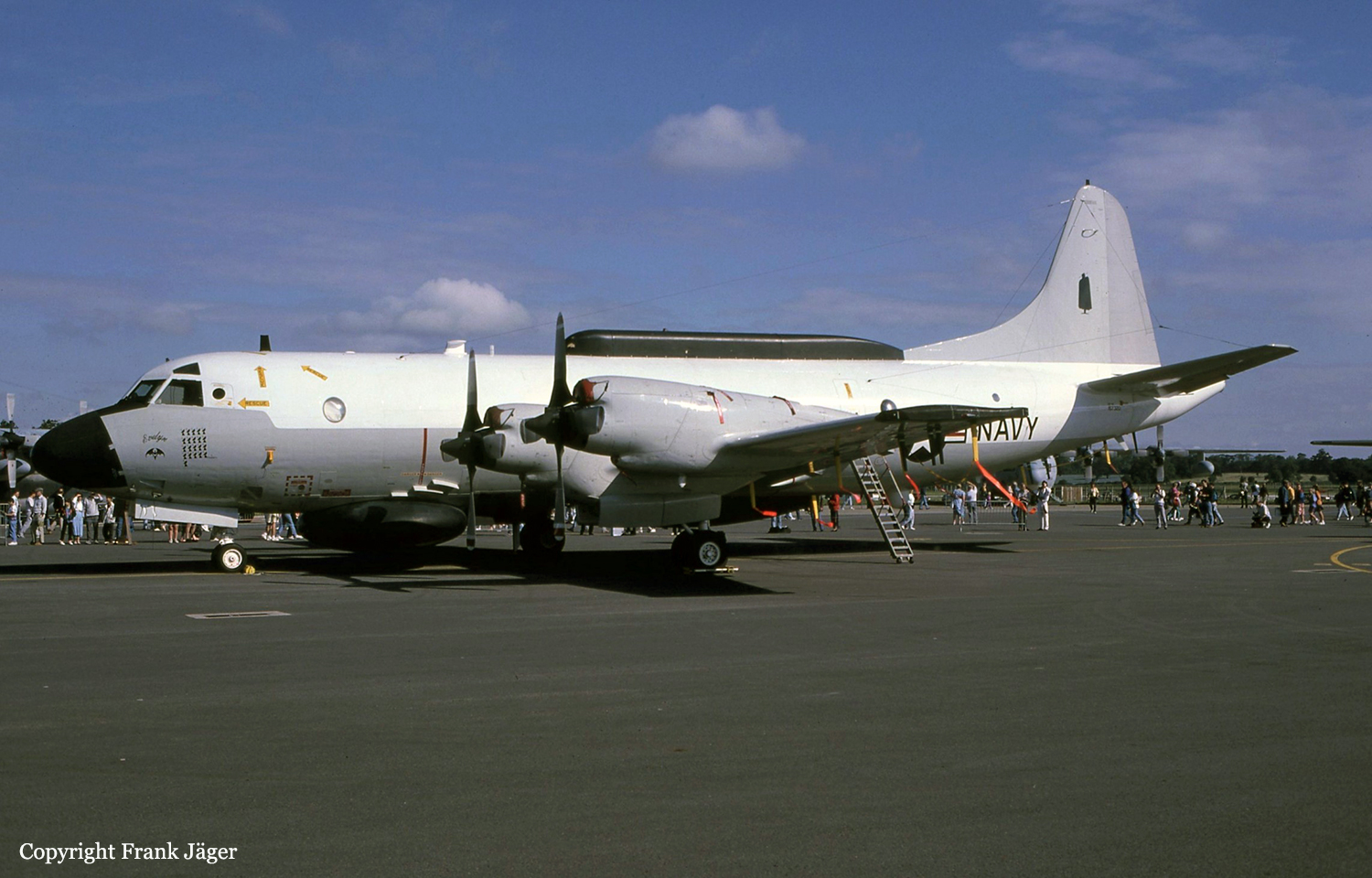 Crash of a Grumman C-1A Trader in Hania: 11 killed 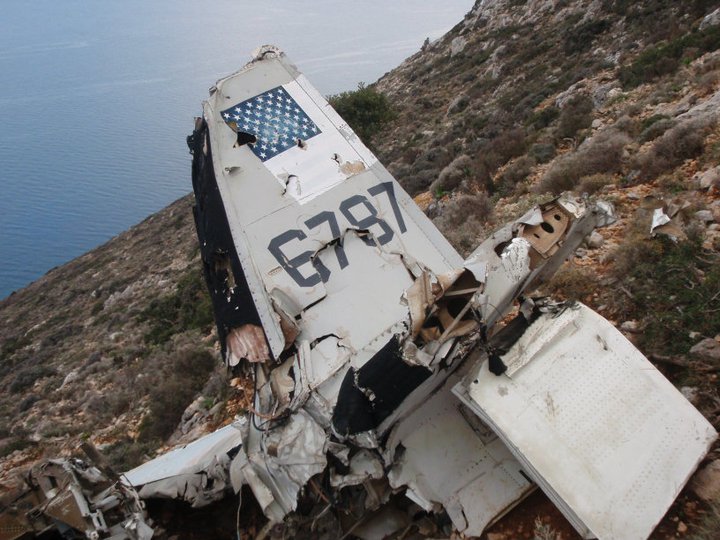 Registration:
50+63
Flight Phase:
Landing (descent or approach)
Flight Type:
Military
Survivors:
No
Site:
Mountains
Schedule:
Hohn - Chania
MSN:
D085
YOM:
1970
Location:
Chania
Crete / Κρήτη
Country:
Greece
Region:
Europe
Crew on board:
5
Crew fatalities:
Pax on board:
37
Pax fatalities:
Other fatalities:
Total fatalities:
42
Circumstances:
The airplane departed Hohn Air Base in Schleswig-Holstein on a flight to Chania-Souda Airport, Greece, carrying 37 German soldiers and a crew of five who were to join a NATO contingency in Crete. The approach to Chania Airport was initiated in poor weather conditions with fog and snow falls. While descending to an altitude of 5,000 feet, the airplane struck the slope of Mt Kukules located about 24 km from the airport. The aircraft disintegrated on impact and all 42 occupants were killed.

Crash of a Grumman C-2A Greyhound off Chania: 7 killed

Registration:
152787
Flight Phase:
Takeoff (climb)
Flight Type:
Military
Survivors:
Yes
Site:
Lake, Sea, Ocean, River
MSN:
4
Location:
Chania
Crete / Κρήτη
Country:
Greece
Region:
Europe
Crew on board:
10
Crew fatalities:
Pax on board:
0
Pax fatalities:
Other fatalities:
Total fatalities:
7
Circumstances:
Shortly after takeoff from Chania-Souda Airport, en route to a US Navy ship cruising in the Mediterranean Sea, the airplane suffered a double engine failure and crashed into the sea about 8 km offshore. Three crew members were rescued while seven others were killed.
Probable cause:
The exact cause of the double engine failure could not be determined. However, the assumption of a fuel contaminated by water was not ruled out.

Crash of a Grumman C-1A Trader near Chania: 3 killed

Registration:
136764
Flight Phase:
Flight
Flight Type:
Military
Survivors:
No
Site:
Mountains
Schedule:
Chania - USS Wasp
MSN:
17
YOM:
1957
Location:
Chania
Crete / Κρήτη
Country:
Greece
Region:
Europe
Crew on board:
3
Crew fatalities:
Pax on board:
0
Pax fatalities:
Other fatalities:
Total fatalities:
3
Circumstances:
The crew was engaged in a short flight from Chania to the USS Wasp that was cruising offshore. Shortly after takeoff from the Souda Bay, while climbing, the airplane struck the slope of a mountain located south of the city. The wreckage was found at an altitude of 2,048 meters and all three crew members were killed.

Crash of a Lockheed P2V-6M Neptune in Heraklion: 10 killed

Crash of a Vickers 634 Viking 1B off Heraklion: 3 killed

Registration:
G-AMNK
Flight Phase:
Takeoff (climb)
Flight Type:
Cargo
Survivors:
No
Site:
Lake, Sea, Ocean, River
Schedule:
Birmingham – Nice – Brindisi – Heraklion – Cairo – Jedda – Aden
MSN:
210
YOM:
1947
Location:
Heraklion
Crete / Κρήτη
Country:
Greece
Region:
Europe
Crew on board:
3
Crew fatalities:
Pax on board:
0
Pax fatalities:
Other fatalities:
Total fatalities:
3
Circumstances:
The crew was performing a cargo flight from Birmingham to Aden with intermediate stops at Nice, Brindisi, Heraklion, Cairo and Jedda. The departure from Heraklion Airport was completed by night from runway 27. Following a takeoff roll of 1,800 meters, the twin engine aircraft lifted off and continued the initial climb to a height of 100 feet when the crew encountered technical problems with the engines. The airplane bank left and crashed into the sea, killing all three crew members.
Probable cause:
The cause of the engine failure was not established but the most likely reason appears to be a defective fuel or ignition system. The reason why it was not possible for the aircraft to maintain safe flight after the failure of the engine remains unknown. 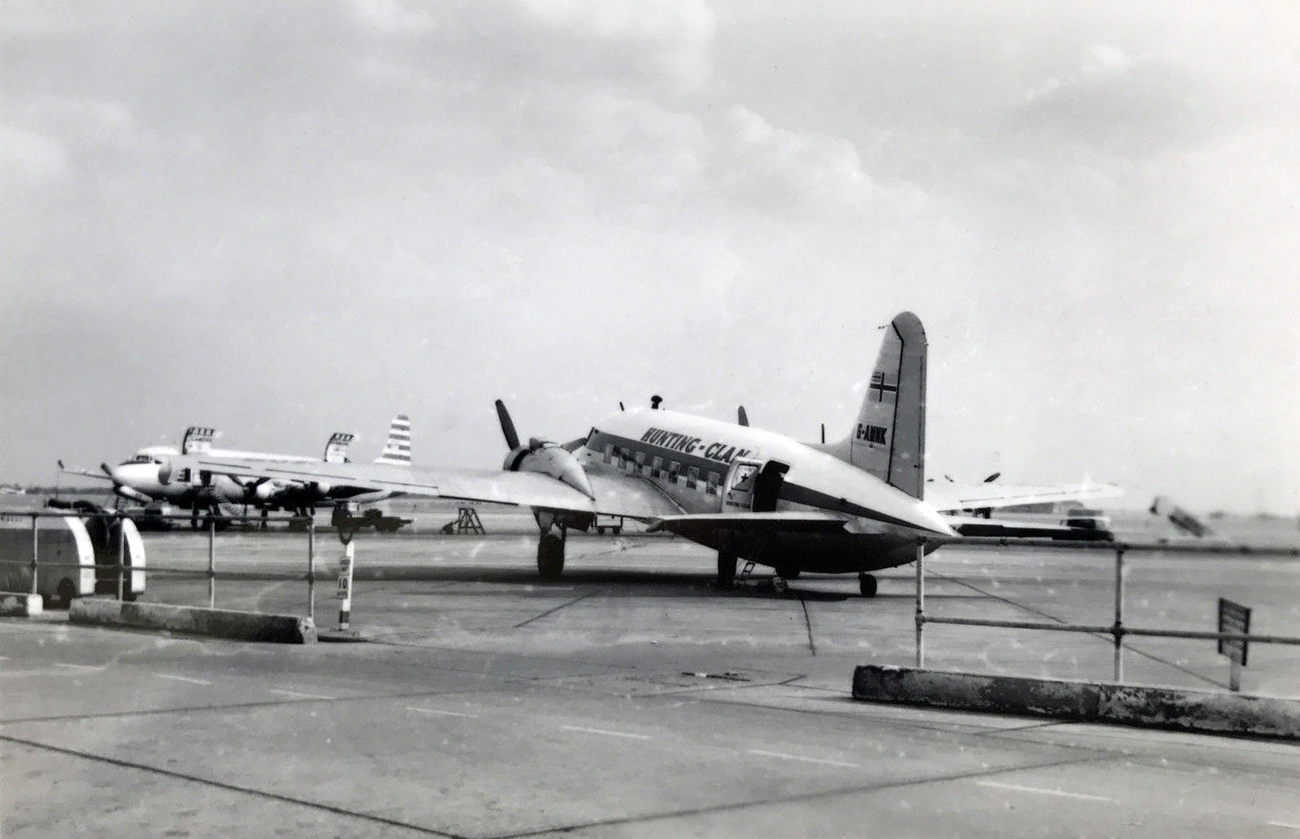 Crash of an Avro 652 Anson XI in Heraklion

Registration:
PH753
Flight Phase:
Landing (descent or approach)
Flight Type:
Military
Survivors:
Yes
Site:
Airport (less than 10 km from airport)
Location:
Heraklion
Crete / Κρήτη
Country:
Greece
Region:
Europe
Crew on board:
2
Crew fatalities:
Pax on board:
0
Pax fatalities:
Other fatalities:
Total fatalities:
0
Circumstances:
The approach was completed in strong cross winds. After touchdown, the aircraft went out of control, veered off runway and hit a ditch. On impact, the undercarriage were sheared off and the aircraft came to rest on its belly. Both occupants were unhurt while the aircraft was damaged beyond repair.