Crash of a Beechcraft C90GT King Air in Morgantown: 1 killed

Type of aircraft:
Beechcraft 90 King Air
Operator:
OZ Gas Aviation
Registration:
N508GT
Flight Phase:
Landing (descent or approach)
Flight Type:
Ferry
Survivors:
No
Site:
Plain, Valley
Schedule:
Tidioute - Farmington - Morgantown
MSN:
LJ-1775
YOM:
2008
Location:
Morgantown
West Virginia
Country:
United States of America
Region:
North America
Crew on board:
1
Crew fatalities:
Pax on board:
0
Pax fatalities:
Other fatalities:
Total fatalities:
1
Captain / Total flying hours:
22000
Aircraft flight hours:
1439
Circumstances:
The airplane, operated by Oz Gas Aviation LLC, was substantially damaged when it struck a communications tower near Morgantown, West Virginia. The certificated airline transport pilot was fatally injured. No flight plan had been filed for the positioning flight from Nemacolin Airport (PA88), Farmington, Pennsylvania, to Morgantown Municipal Airport (MGW), Morgantown, West Virginia conducted under Title14 Code of Federal Regulations (CFR) Part 91. At 0924 on the morning of the accident, the airplane departed from Rigrtona Airport (13PA), Tidioute, Pennsylvania for PA88 with the pilot and three passengers onboard. The airplane landed on runway 23 at PA88 at 0944. The pilot then parked the airplane; shutdown both engines, and deplaned the three passengers. He advised them that he would be back on the following day to pick them up. After the passengers got on a shuttle bus for the Nemacolin Woodlands Resort, the pilot started the engines. He idled for approximately 2 minutes, and then back taxied on runway 23 for takeoff. At 0957, he departed from runway 23 for the approximately 19 nautical mile positioning flight to MGW, where he was going to refuel and spend the night. After departure from PA88, the airplane climbed to 3,100 feet above mean sea level (msl) on an approximately direct heading for MGW. The pilot then contacted Clarksburg Approach Control and was given a discrete code of 0130. When the airplane was approximately nine miles east of the Morgantown airport, the air traffic controller advised the pilot that he had "radar contact" with him. The airplane then descended to 3,000 feet, and approximately one minute later struck the communications tower on an approximate magnetic heading of 240 degrees. According to a witness who was cutting timber across the road from where the accident occurred; the weather was cloudy with lighting and thunder, and it had just started "sprinkling". He then heard a loud "bang", turned, and observed the airplane descending upside down, and then impact. About 20 minutes later it stopped "sprinkling". He advised that he could still see the top of the tower when it was "sprinkling".
Probable cause:
The pilot's inadequate preflight route planning and in-flight route and altitude selection, which resulted in an in-flight collision with a communications tower in possible instrument
meteorological conditions. Contributing to the accident were the pilot's improper use of the enhanced ground proximity warning system's terrain inhibit switch and the air traffic controller's failure to issue a safety alert regarding the proximity of the tower. 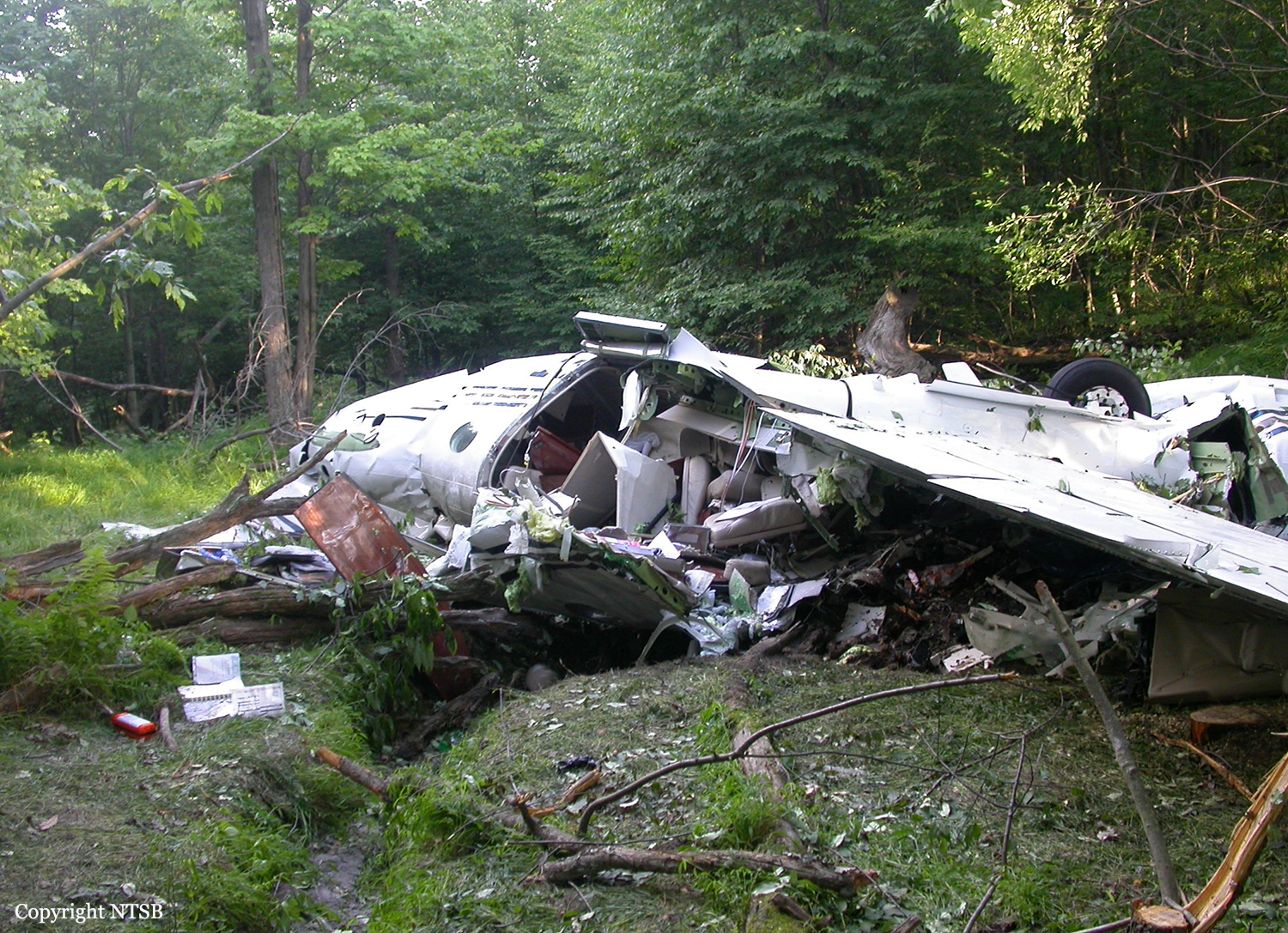 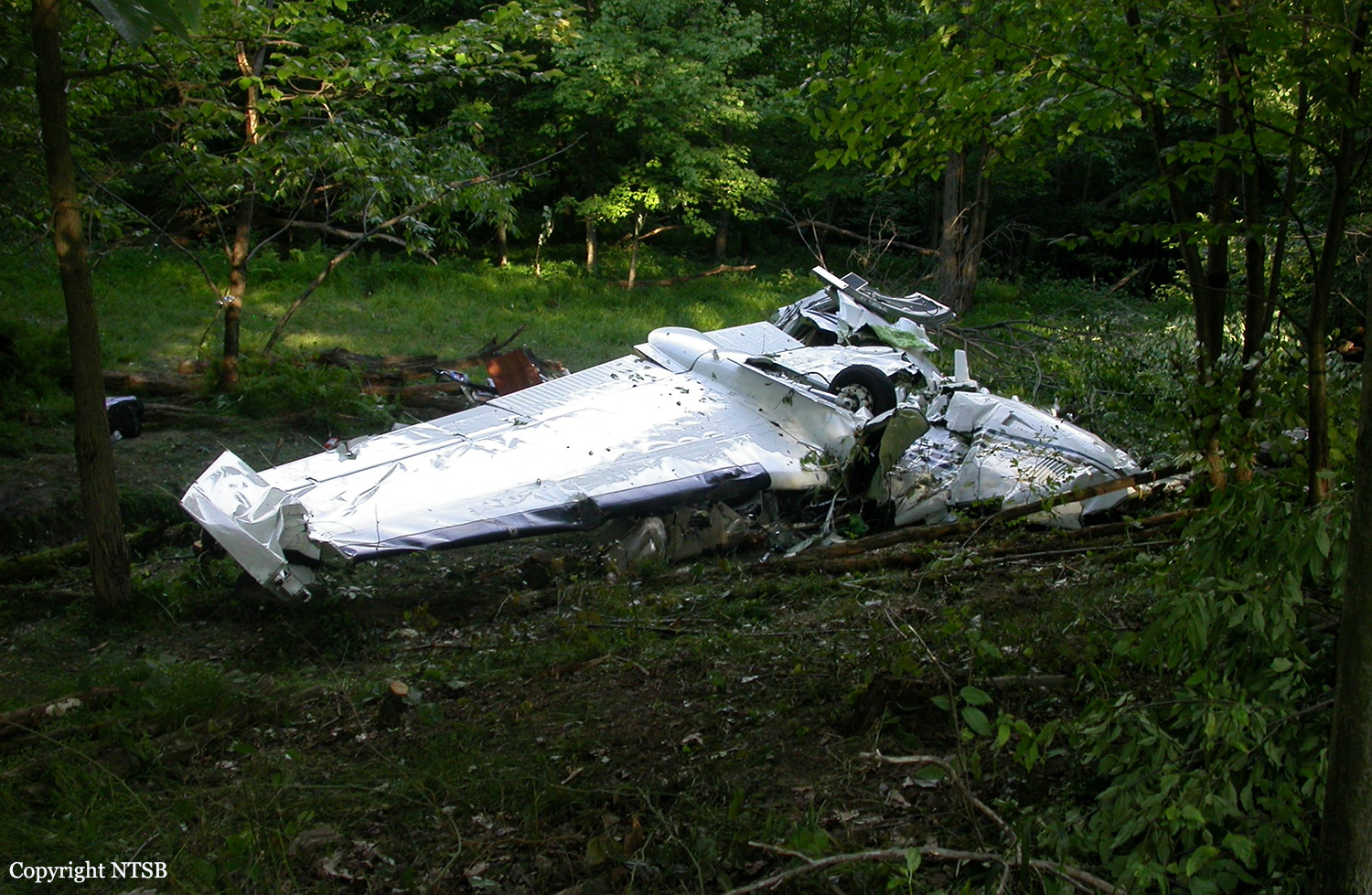 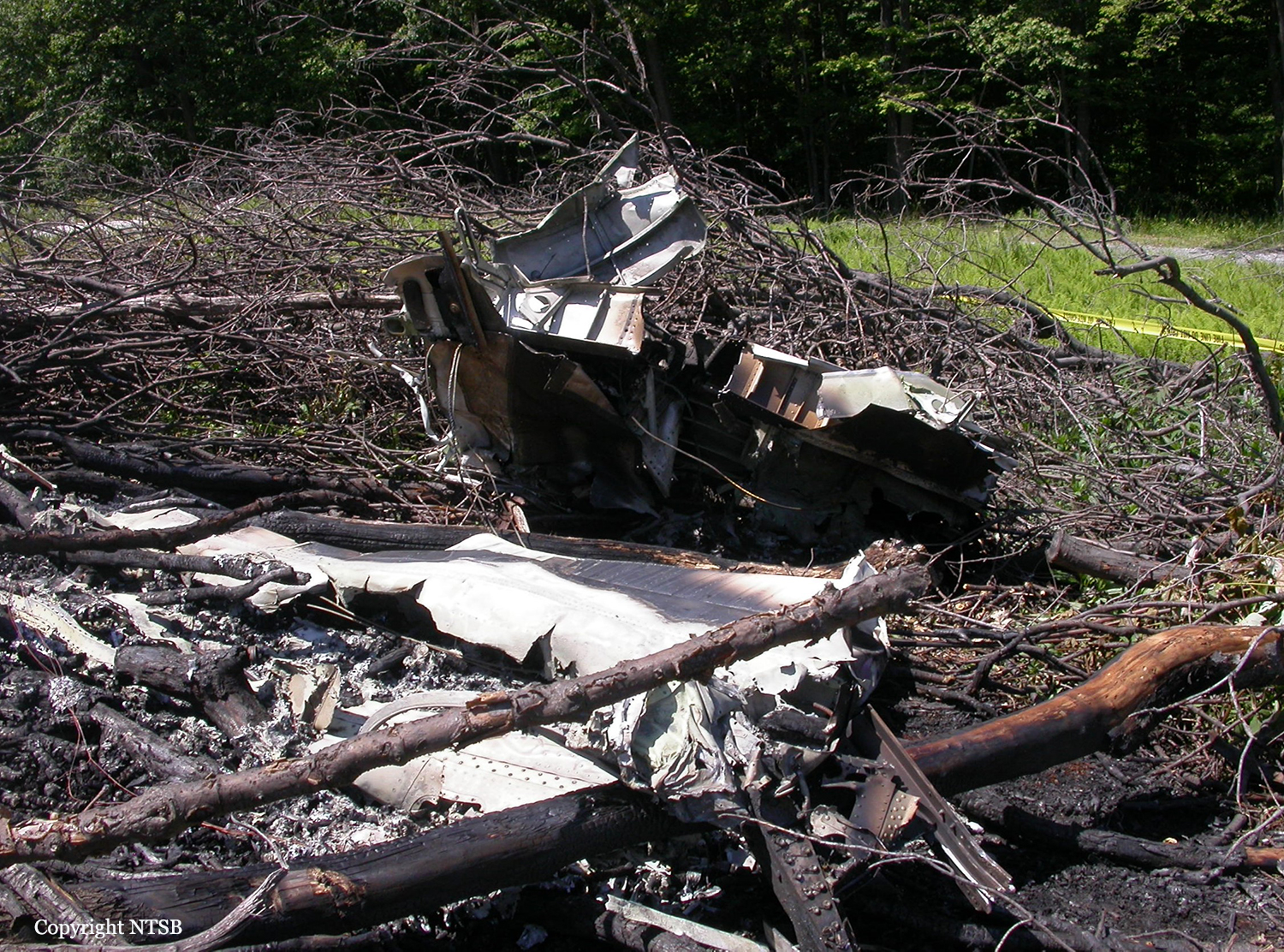 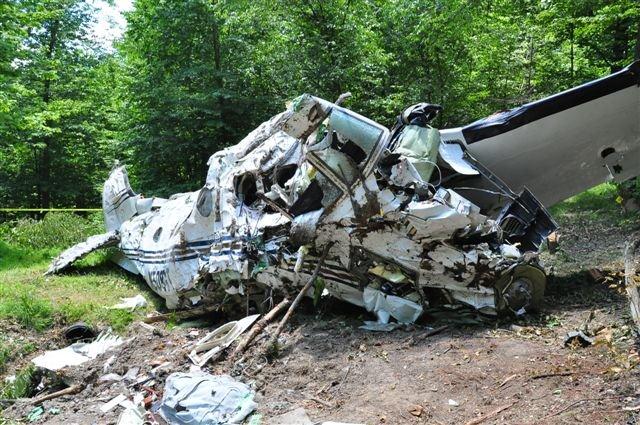 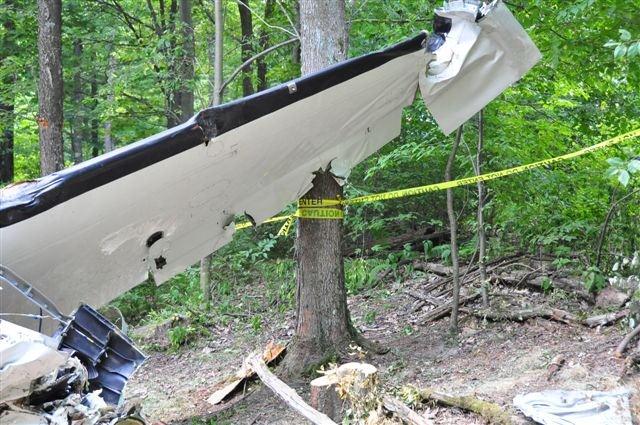 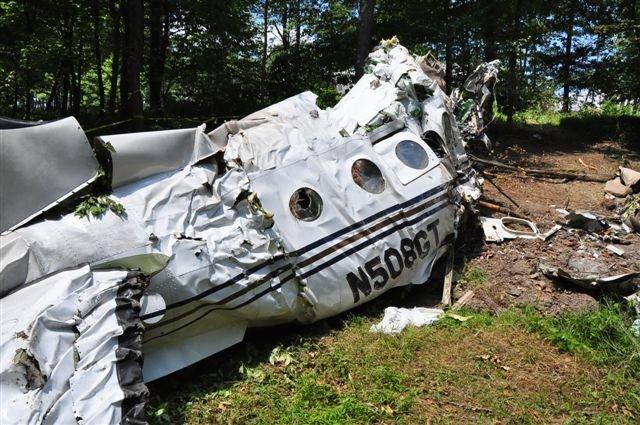 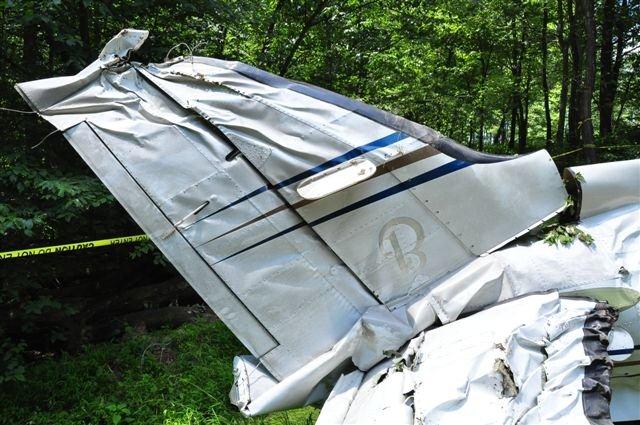 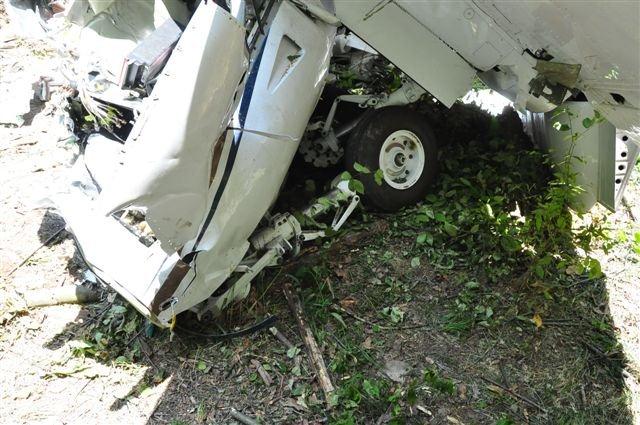 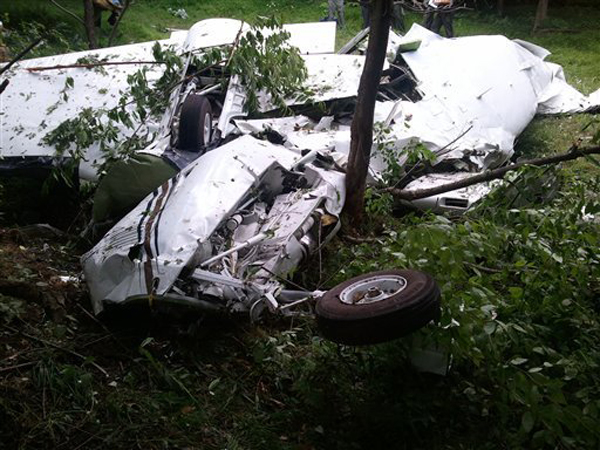 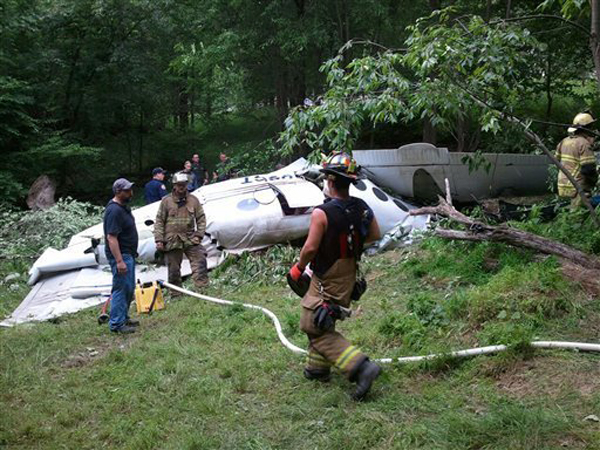 Crash of a Cessna 414 Chancellor in Johnstown: 2 killed

Type of aircraft:
Cessna 414 Chancellor
Operator:
Flight Source
Registration:
N400CS
Flight Phase:
Landing (descent or approach)
Flight Type:
Private
Survivors:
No
Site:
Airport (less than 10 km from airport)
Schedule:
Morgantown - Teterboro
MSN:
414-0613
Location:
Johnstown
Pennsylvania
Country:
United States of America
Region:
North America
Crew on board:
2
Crew fatalities:
Pax on board:
0
Pax fatalities:
Other fatalities:
Total fatalities:
2
Captain / Total flying hours:
3547
Aircraft flight hours:
5904
Circumstances:
The airplane encountered in-flight icing, and the pilot diverted to an airport to attempt to knock the ice off at a lower altitude. During the instrument approach, the pilot advised the tower controller of the ice, and that it depended on whether or not the ice came off the airplane if she would land. As the airplane broke out of the clouds, it appeared to tower personnel to be executing a missed approach; however, it suddenly "dove" for the runway. The tower supervisor noticed that the landing gear were not down, and at 75 to 100 feet above the runway, advised the pilot to go around. The airplane continued to descend, and by the time it impacted the runway, the landing gear were only partially extended, and the propellers and airframe impacted the pavement. The pilot then attempted to abort the landing. The damaged airplane became airborne, climbed to the right, stalled, and nosed straight down into the ground.
Probable cause:
The pilot's improper decision to abort the landing with a damaged airplane. Contributing to the accident were the damage from the airplane's impact with the runway, the pilot's failure to lower the landing gear prior to the landing attempt, and the in-flight icing conditions.
Final Report: 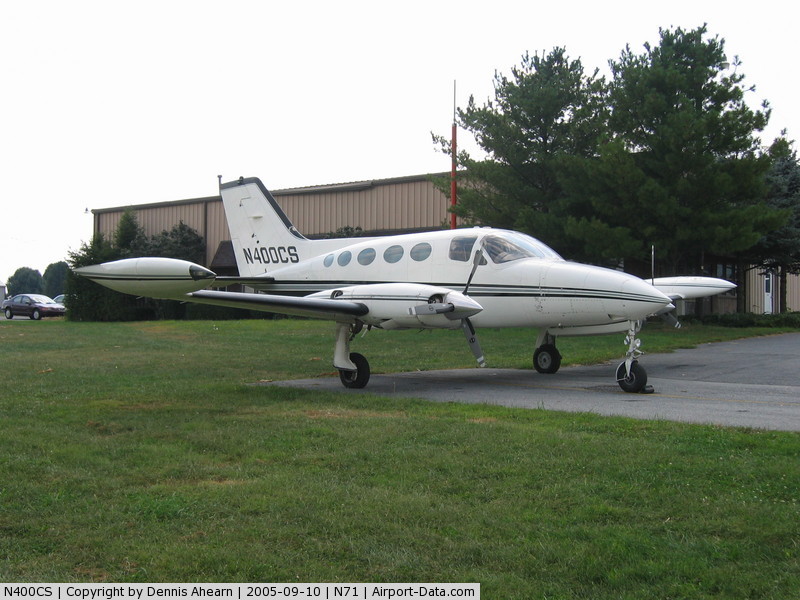 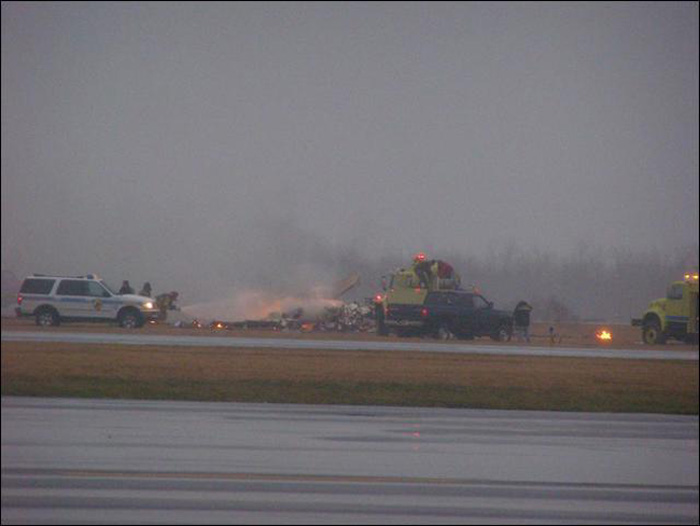 Crash of a Beechcraft C90 King Air in Newton: 2 killed

Registration:
N5WU
Flight Phase:
Flight
Flight Type:
Positioning
Survivors:
No
Site:
Mountains
Schedule:
Morgantown - Charleston
MSN:
LJ-635
YOM:
1974
Location:
Newton
West Virginia
Country:
United States of America
Region:
North America
Crew on board:
2
Crew fatalities:
Pax on board:
0
Pax fatalities:
Other fatalities:
Total fatalities:
2
Captain / Total flying hours:
12700
Captain / Total hours on type:
6155.00
Aircraft flight hours:
7523
Circumstances:
The airplane was flown from Morgantown to Charleston to drop off passengers. Once there, the pilot called the mechanic who was scheduled to replace the right transfer pump, and told him the right boost pump was also inoperative. The mechanic told the pilot, he would replace both pumps the next morning in Charleston. Adding that de-fueling the airplane would take longer than changing the pumps. The mechanic recalled that the pilot was concerned about the amount of time necessary for the repair. The airplane was then repositioned back to Morgantown for another flight the next day to Charleston. The morning of the accident, the airplane departed Morgantown, and was being vectored for the ILS approach to Charleston when the copilot declared an emergency. He then announced that they had 'a dual engine failure, two souls onboard and zero fuel.' Examination of the wreckage and both engines revealed no pre-impact failures or malfunctions. With the right transfer pump inoperative. 28 gallons of fuel in the right wing would be unusable. In addition, the flight manual states that 'both boost pumps must be operable prior to take-off.'
Probable cause:
The pilot inadequate management of the fuel system which resulted in fuel starvation to both engines. Factors in the accident were the pilot's concern about maintenance being completed prior to executing a scheduled flight later in the day, and operating the airplane with known deficiencies.
Final Report:

Registration:
N386T
Flight Phase:
Landing (descent or approach)
Flight Type:
Delivery
Survivors:
Yes
Site:
Airport (less than 10 km from airport)
Schedule:
Lafayette – Morgantown
MSN:
20411
YOM:
1944
Location:
Morgantown
West Virginia
Country:
United States of America
Region:
North America
Crew on board:
3
Crew fatalities:
Pax on board:
0
Pax fatalities:
Other fatalities:
Total fatalities:
1
Captain / Total flying hours:
23553
Captain / Total hours on type:
3899.00
Copilot / Total flying hours:
966
Copilot / Total hours on type:
207
Aircraft flight hours:
12241
Circumstances:
A Purdue Aeronautics Corporation, Douglas DC-3, N386T crashed while making an instrument approach to the Morgantown Municipal Airport, Morgantown, West Virginia. The accident occurred 2.5 nautical miles from the Morgantown VOR on the 340 degrees radial at 1110 c.s.t. 1 November 29, 1963. The stewardess was fatally injured in the accident but the captain and first officer escaped with minor injuries. There were no other persons aboard the aircraft. The aircraft was damaged beyond repair by the impact and post impact fire. N386T was being ferried to Morgantown in preparation for a charter flight.
Probable cause:
The Board determines that the probable cause of this accident was the pilot's execution of an instrument approach in an aircraft not equipped with navigational instrumentation appropriate to the ground facilities being used.
Final Report: 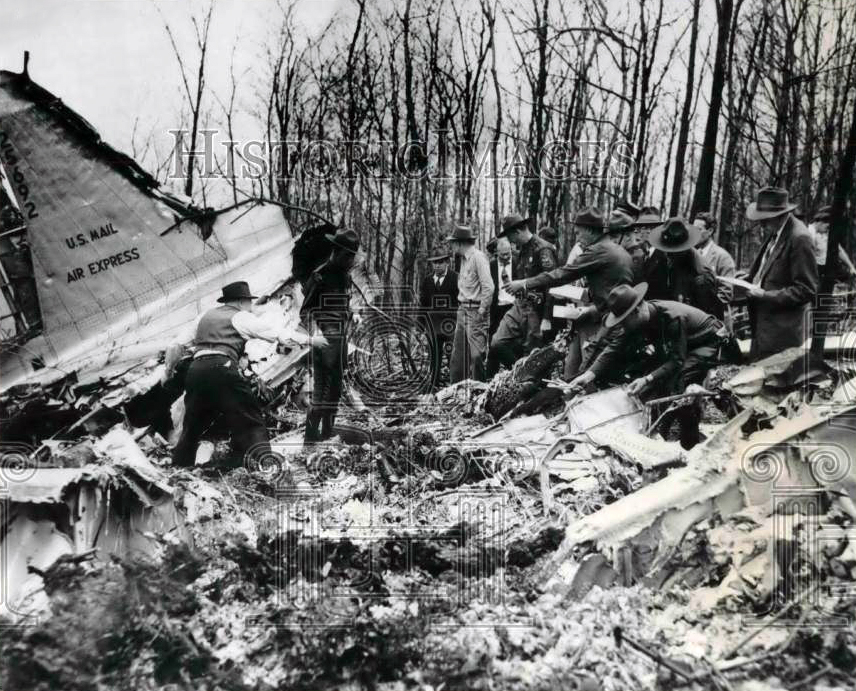 Crash of a Travel Air 4000 in Morgantown: 1 killed