Crash of a Hawker 800XP in Farmingdale

Registration:
N412JA
Flight Phase:
Landing (descent or approach)
Flight Type:
Ferry
Survivors:
Yes
Site:
Airport (less than 10 km from airport)
Schedule:
Miami - Farmingdale
MSN:
258516
YOM:
2001
Location:
Farmingdale-Republic
New York
Country:
United States of America
Region:
North America
Crew on board:
2
Crew fatalities:
Pax on board:
0
Pax fatalities:
Other fatalities:
Total fatalities:
0
Circumstances:
On December 20, 2020, about 2035 eastern standard time, a Beechcraft Hawker 800XP, N412JA, was substantially damaged when it was involved in an accident at Republic Airport (FRG), Farmingdale, New York. The captain sustained minor injuries and the first officer was seriously injured. The airplane was operated as a Title 14 Code of Federal Regulations (CFR) Part 91 business flight. The flight was operating on an instrument flight rules flight plan from Miami-Opa Locka Executive Airport (OPF), Opa Locka, Florida, to FRG. The captain was the pilot monitoring, and the first officer was the pilot flying. Both pilots stated that the flight to FRG was normal. As they approached FRG, air traffic control (ATC) vectored them onto the ILS RWY 14 approach. The weather included a ceiling of 200 ft overcast and 3/4-mile visibility, which was the weather minimum for the approach. The pilots briefed the approach, and the airplane was fully configured to land by the time they reached the final approach fix (FAF). Both pilots said that after passing the FAF, the FRG tower-controller reported that the visibility had deteriorated to 1/4-mile. The captain asked the first officer if he was “comfortable” continuing with the approach, and he said he was. The first officer said he was using the autopilot on the approach, the airplane was stabilized “on glideslope and on speed,” and he felt they could safely descend to minimums. The first officer reported that the captain made the standard altitude callouts, and when they reached 200 ft, the captain announced “minimums, lights.” The first officer then looked outside, saw the “lead-in” lights, announced “continuing,” and returned to flying the airplane via instruments. As the airplane descended to 100 ft, the captain said the runway was to the left. The first officer said he looked out and saw runway end identifier lights, the red terminating lights, and only the end of the runway. The weather was worse than he expected, and it was as if a “black cloud” was sitting at the end of the runway. The first officer said the conditions were not “good enough for him” and hit the takeoff/go-around (TOGA) switch. He did not verbally announce that he was going-around, but the captain said, “Go-Around.” The first officer responded by saying “Go Around” twice, called for flaps 15°, and added full power. The first officer said the airplane never established a positive rate of climb and impacted the ground. The captain said that as the airplane descended to 100 ft, it began drifting to the right. He told the first officer that he needed to make a correction; however, the correction was not sufficient to get the airplane realigned with the runway centerline and he called for a go-around. The captain said the airplane pitched up in response to the TOGA switch, and he heard both engines spool up as he retracted the flaps, but the airplane did not climb. The airplane then impacted the ground, veered right, and spun before coming to a stop. According to a Federal Aviation Administration (FAA) inspector, the airplane departed the runway environment about 2,000 ft down the runway, then traveled approximately 1,500 ft before coming to rest. The nose wheel and both main landing gear departed the aircraft and were found on the runway. There was no postimpact fire. 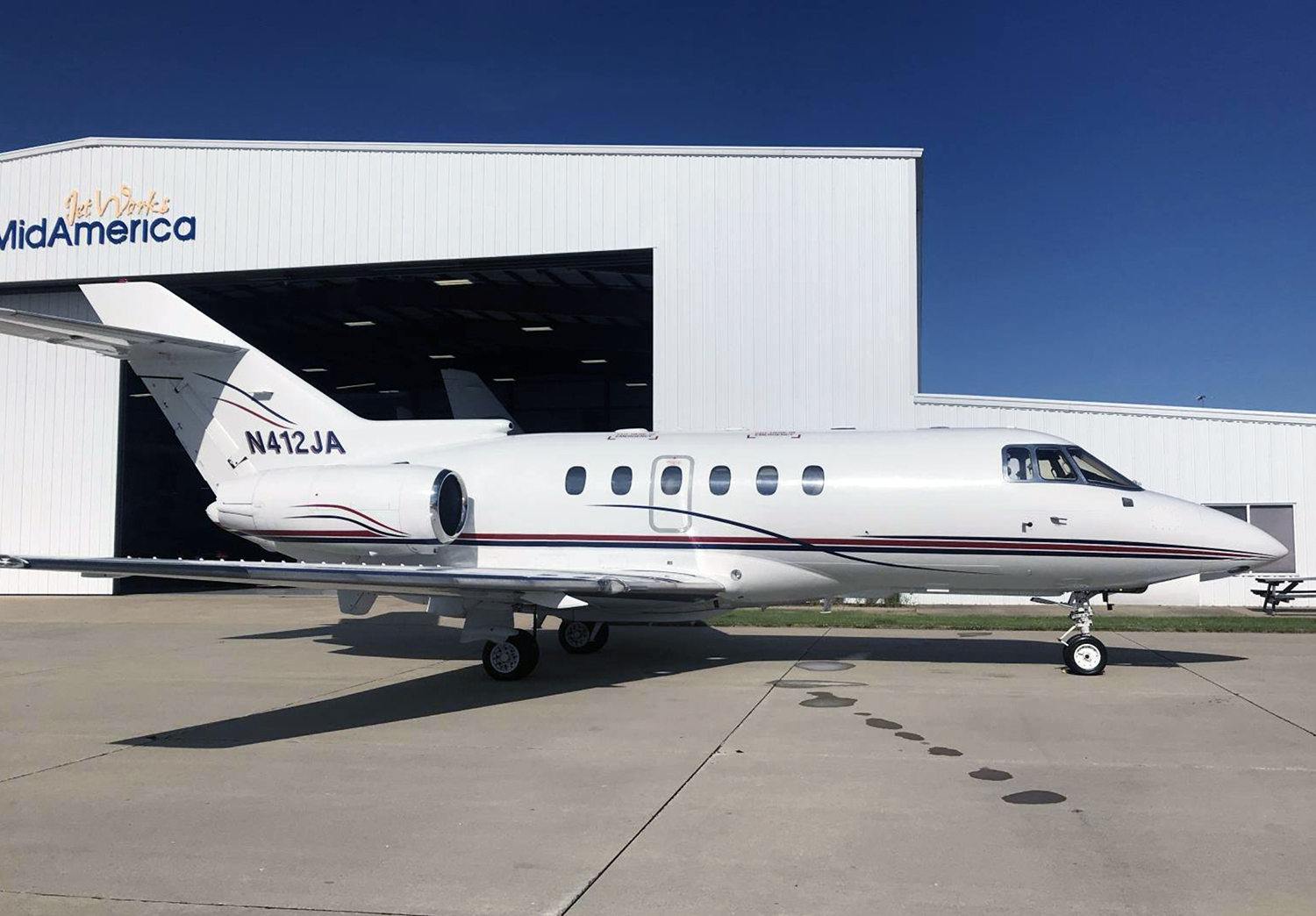 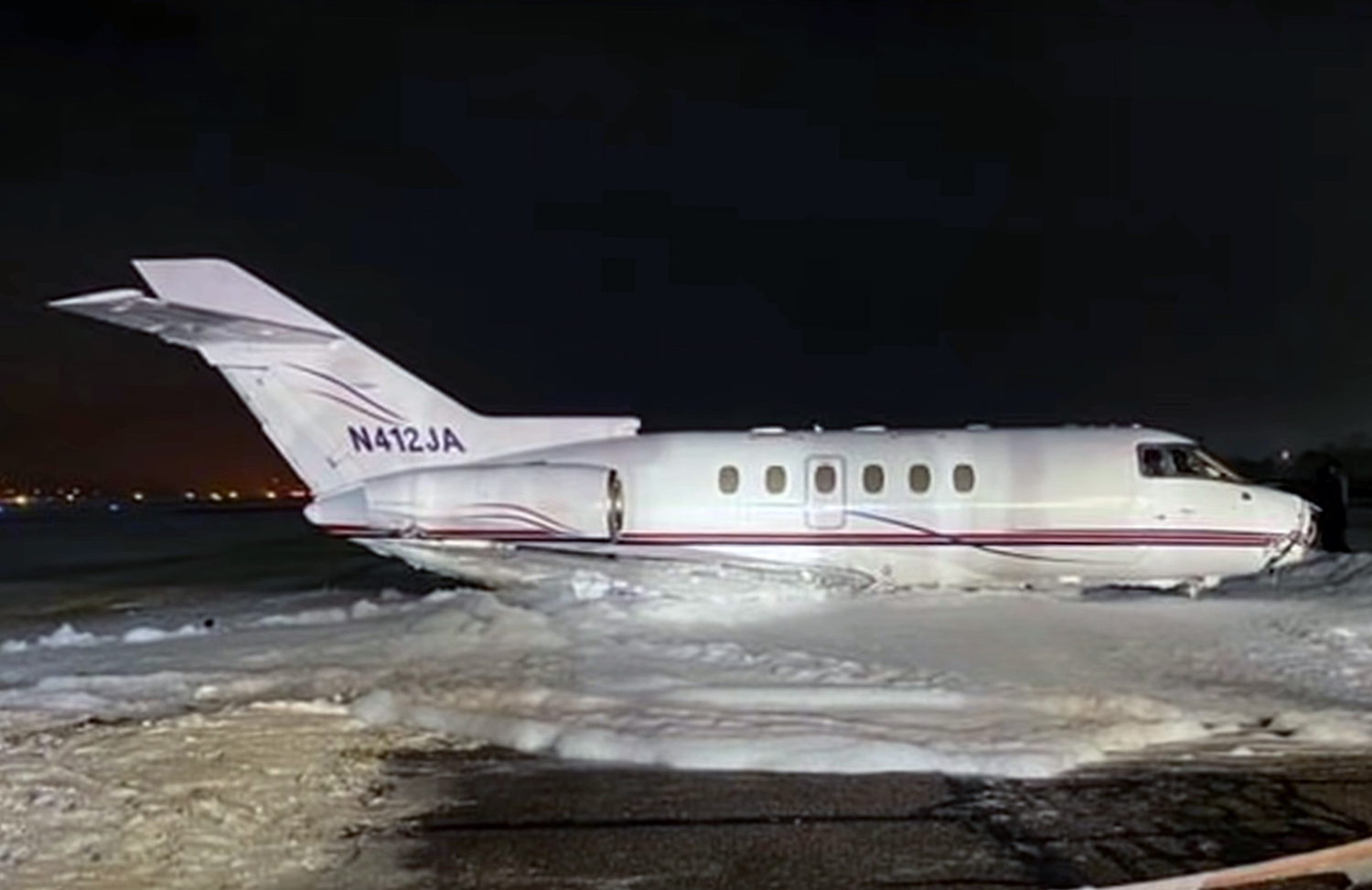 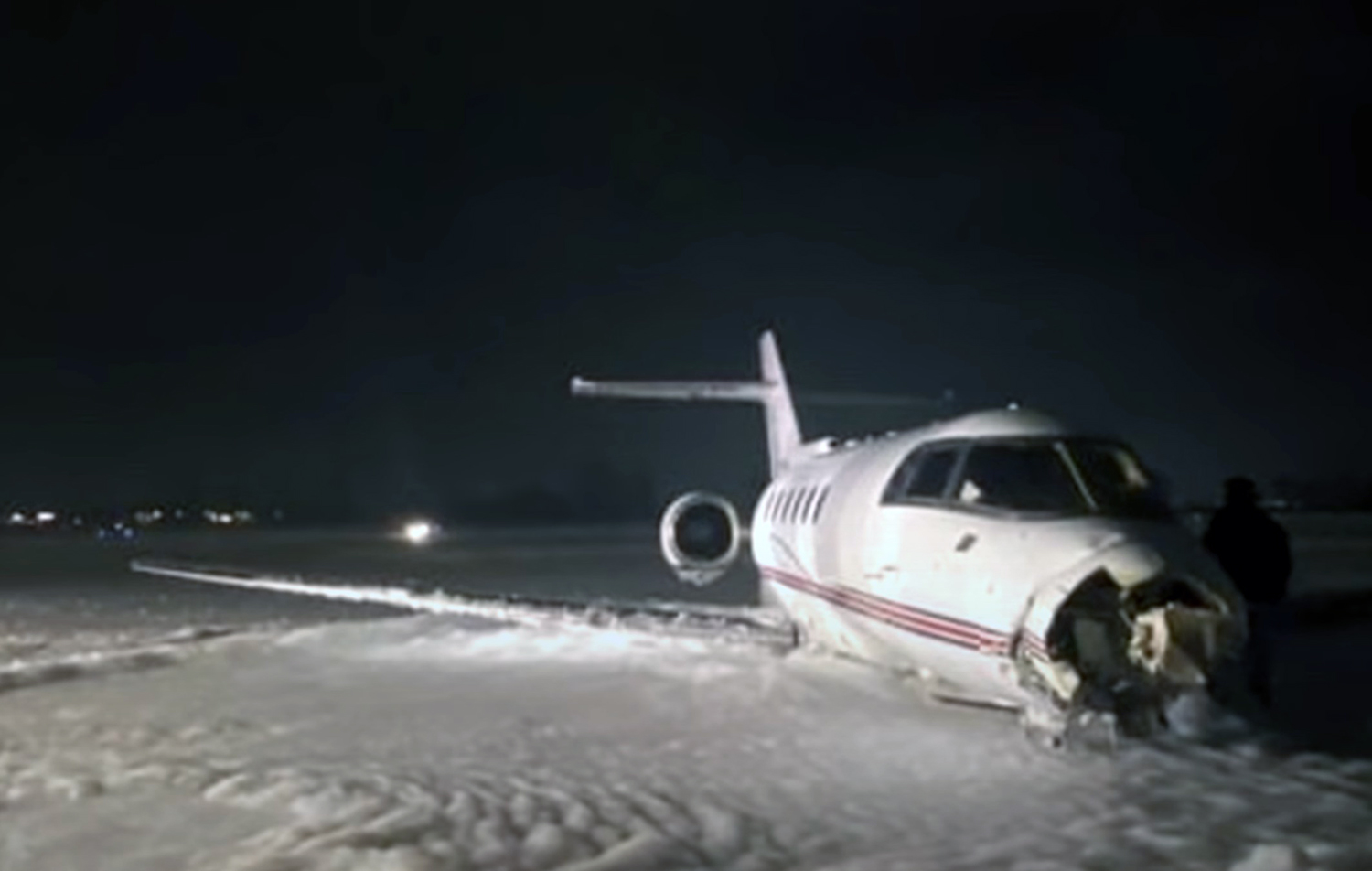 Crash of a Hawker 800XP in Scottsdale

Registration:
N100AG
Flight Phase:
Landing (descent or approach)
Flight Type:
Private
Survivors:
Yes
Site:
Airport (less than 10 km from airport)
Schedule:
Rogers – Scottsdale
MSN:
258747
YOM:
2005
Location:
Scottsdale
Arizona
Country:
United States of America
Region:
North America
Crew on board:
2
Crew fatalities:
Pax on board:
0
Pax fatalities:
Other fatalities:
Total fatalities:
0
Aircraft flight hours:
4823
Circumstances:
On March 14, 2020, about 1600 mountain standard time, a Raytheon Aircraft Company Hawker 800XP, N100AG, was substantially damaged after veering off the runway and impacting a sign at the Scottsdale Airport, Scottsdale, Arizona. The pilot and co-pilot were not injured. The airplane was being operated under the provisions of Title 14 Code of Federal Regulations Part 91 as a personal flight. The pilot stated that the flight departed from Roger, Arkansas about 1315 with the planned destination of Scottsdale. After an uneventful flight, the pilot made a stabilized approach to runway 21. Upon landing, the airplane touched down on the runway centerline in light and variable winds. The pilot recalled that the touchdown felt normal. During the landing roll, the airplane began to veer to the right and the pilot added left rudder in an effort to correct. Despite his attempts of full left rudder deflection, the airplane continued to veer off the runway. The airplane continued off the runway surface and encountered large rocks located between the runway and taxiway. The airplane collided with runway lights and a sign puncturing the left wing and resulted in substantial damage; the engines both sustained foreign object damage from the rocks. The pilot opined that the loss of control was a result of the nosewheel steering wheel not being aligned correctly. 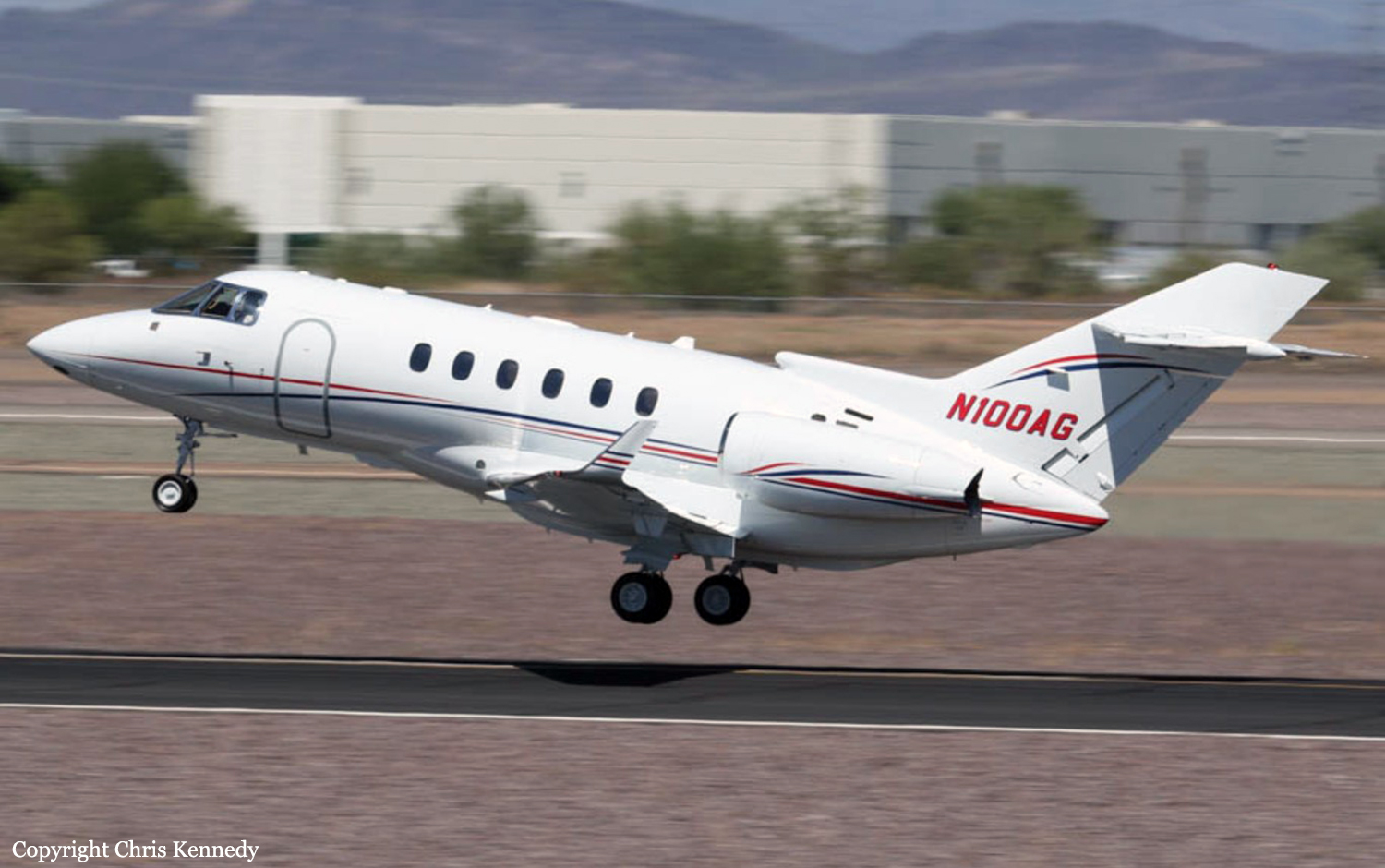