Registration:
6V-AIM
Flight Phase:
Flight
Flight Type:
Ambulance
Survivors:
No
Site:
Lake, Sea, Ocean, River
Schedule:
Ouagadougou - Dakar
MSN:
257062
YOM:
1979
Location:
Atlantic Ocean
All World
Country:
World
Region:
World
Crew on board:
3
Crew fatalities:
Pax on board:
4
Pax fatalities:
Other fatalities:
Total fatalities:
7
Circumstances:
The twin engine aircraft left Ouagadougou Airport at the end of the afternoon on an ambulance flight to Dakar-Léopold Sédar Senghor Airport with one patient, one doctor, two nurses and three crew members. For unknown reason, the aircraft continued its route over the Atlantic Ocean and eventually crashed into the sea some 111 km west of Dakar at 1812LT. One week after the accident, the wreckage was not localized and no trace of the aircraft nor the seven occupants was found. There were on board three Senegalese, two Congolese, one Algerian and one French citizen, the patient. About one week after the accident, the National Agency for Civil Aviation and Meteorology (ANACIM) of Senegal mentioned that the accident may have been caused by a collision near the VOR of Tambacounda with a Ceiba Intercontinental Boeing 737-800 registered 3C-LLY. En route from Dakar to Cotonou, the 737 was cruising at FL350 when the collision occurred. For unknown reason, the crew of the 737 changed his route and continued to Malabo instead of landing on the nearest airport according to Senegalese Authorities. As Tambacounda is located more than 600 km east of the presumed crash site, the question is asked about the exact circumstances of a possible inflight collision. On September 18, following investigation from the French BEA, it was confirmed in a written report transmitted by the Ceiba Captain that the collision occurred at FL340 and that he did not sea the HS125 prior to the accident and after the collision. He decided to divert to Malabo where a ground control of the B737 was performed. It is believed that the damages were very limited. Development will follow. 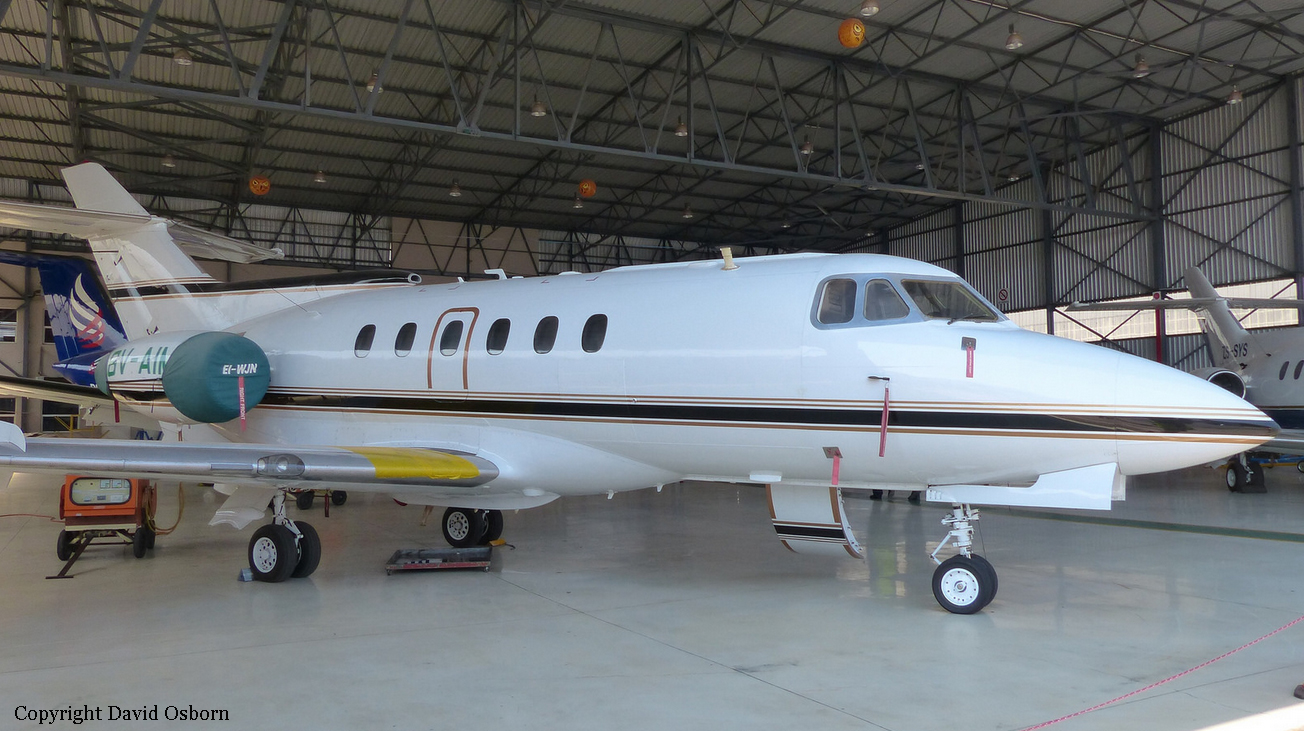 Crash of an Antonov AN-12 in Agadir: 8 killed 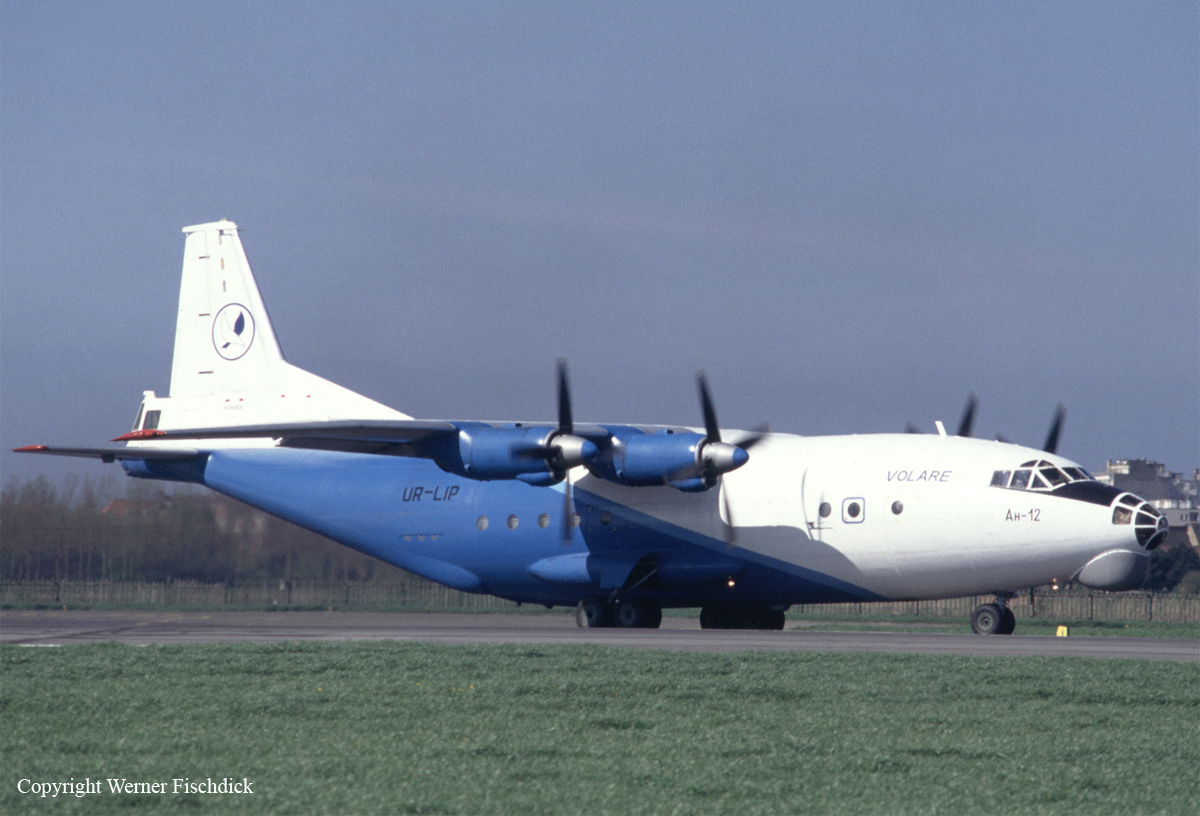 Crash of an Airbus A300 in Dakar 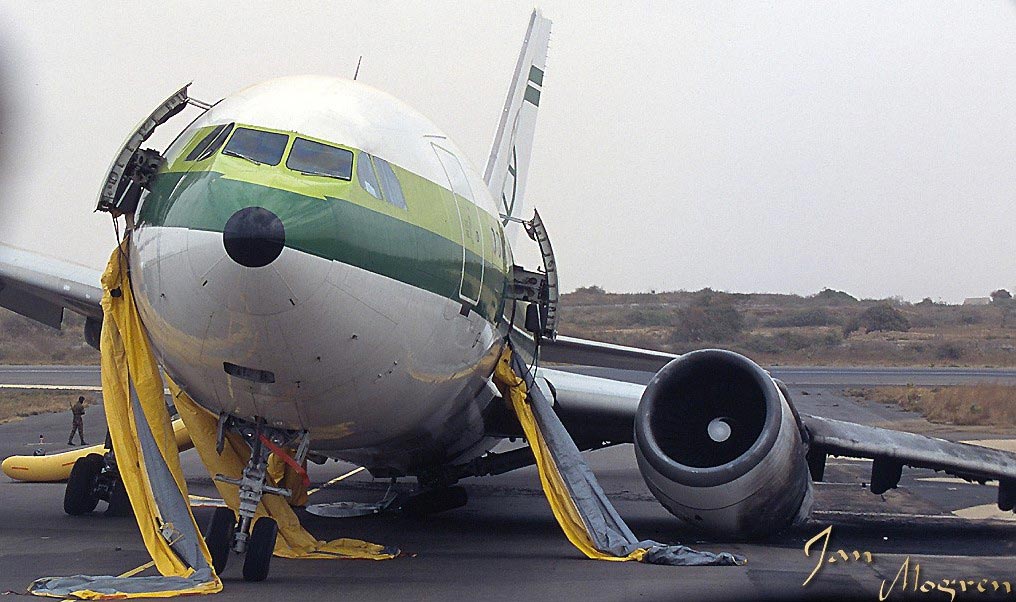 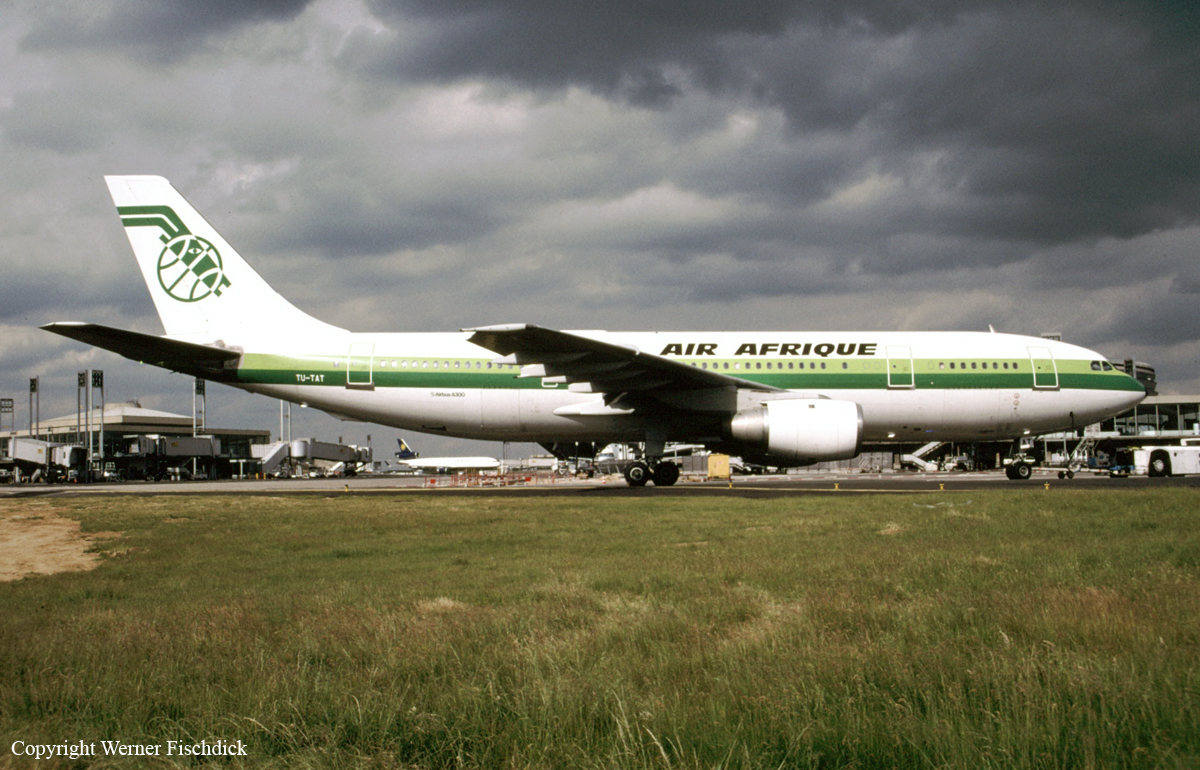 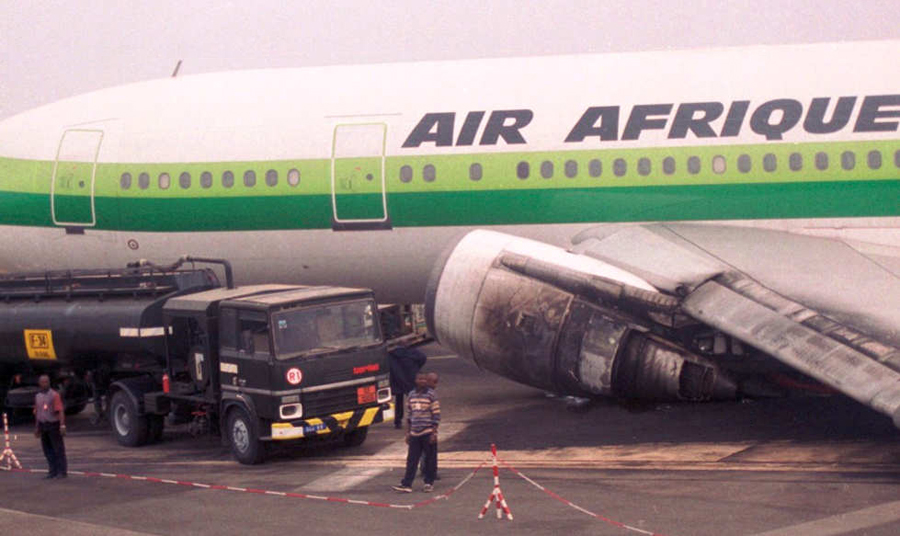 Registration:
6V-AEO
Flight Phase:
Takeoff (climb)
Flight Type:
Charter/Taxi (Non Scheduled Revenue Flight)
Survivors:
Yes
Site:
Airport (less than 10 km from airport)
Schedule:
Tambacounda - Dakar
MSN:
1769
YOM:
1979
Location:
Tambacounda
Tambacounda Region
Country:
Senegal
Region:
Africa
Crew on board:
3
Crew fatalities:
Pax on board:
49
Pax fatalities:
Other fatalities:
Total fatalities:
23
Circumstances:
The departure was delayed due to overbooking. Passengers and crew were nervous and few passengers should disembark. Following a normal takeoff roll, the pilot-in-command started the rotation. About 30 seconds later, while climbing to a height of about 100 feet, the left engine failed. The aircraft stalled and crashed less than 100 metres past the runway end, bursting into flames. The aircraft broke in two and most of the survivors were found in the rear part of the cabin while the front one disintegrated on impact. Twenty-nine people survived while 23 others, including all three crew members, were killed.
Probable cause:
The exact cause of the accident could not be determined and the official accident report was not published by the Senegal Government. Nevertheless, The determination of the causes of the accident is therefore based on the expert reports ordered by the French investigating magistrate and the position of the locking pin of the left supply valve observed after the accident. Experts conclude that the left engine has stopped due to the closing of the fuel supply valve. The poor quality of the fuel was also blamed, which, before the accident, led Air Senegal to ask a chemical engineer from Shell-Senegal to test the fuel and the refueling operations. The engineer, while noting the poor quality of the fuel, came to the same conclusions as the experts. In France, operational tests were carried out on a similar aircraft and, moreover, fuel analyzes were carried out by the Accident Investigation Bureau. To these different expertises were added those of the government of the United Kingdom, the country of the manufacturer of the aircraft, and the results of a test carried out by British Aerospace with the same aircraft. The various analyzes carried out on the drums used for refueling showed that water was not present in the drums but in the pump used for refueling. It appears that the pump had been disassembled and the filters removed before filling the aircraft's tanks. As a result, the tiny amount of water that could have been found in the tanks would not have allowed the fuel to be considered contaminated and therefore unfit for consumption. The court, considering itself sufficiently informed by all these expertises, refused to grant the civil parties a further investigation 12 years after the facts. For the magistrates, there is no doubt that the determining cause of the accident was the closure of the left fuel isolation valve. The various investigations finally made it possible to determine that a ground mechanic had carried out a technical intervention under the left wing before the departure, at the level of the engine, but the exact nature of this intervention could not be established with precision. In its judgment, the court recognized that various indirect causes may have played a role in the occurrence of this air disaster: anomalies in the storage and distribution of fuel, nervousness and intense stress generated around the aircraft due to overbooking, irritability of the captain who, impatient to take off, did not consider certain checks useful. However, the magistrates have ruled, the determining cause perfectly defined by the various experts is the closing of the isolation valve of the left engine of the aircraft. On May 14, 2009, more than 12 years after the incident, Senegalese mechanic Moustapha Diagne was sentenced to 30 months' imprisonment with a 15-month suspended sentence. The length of the firm prison sentence is the length of the pre-trial detention that the defendant, after being extradited, had already served. 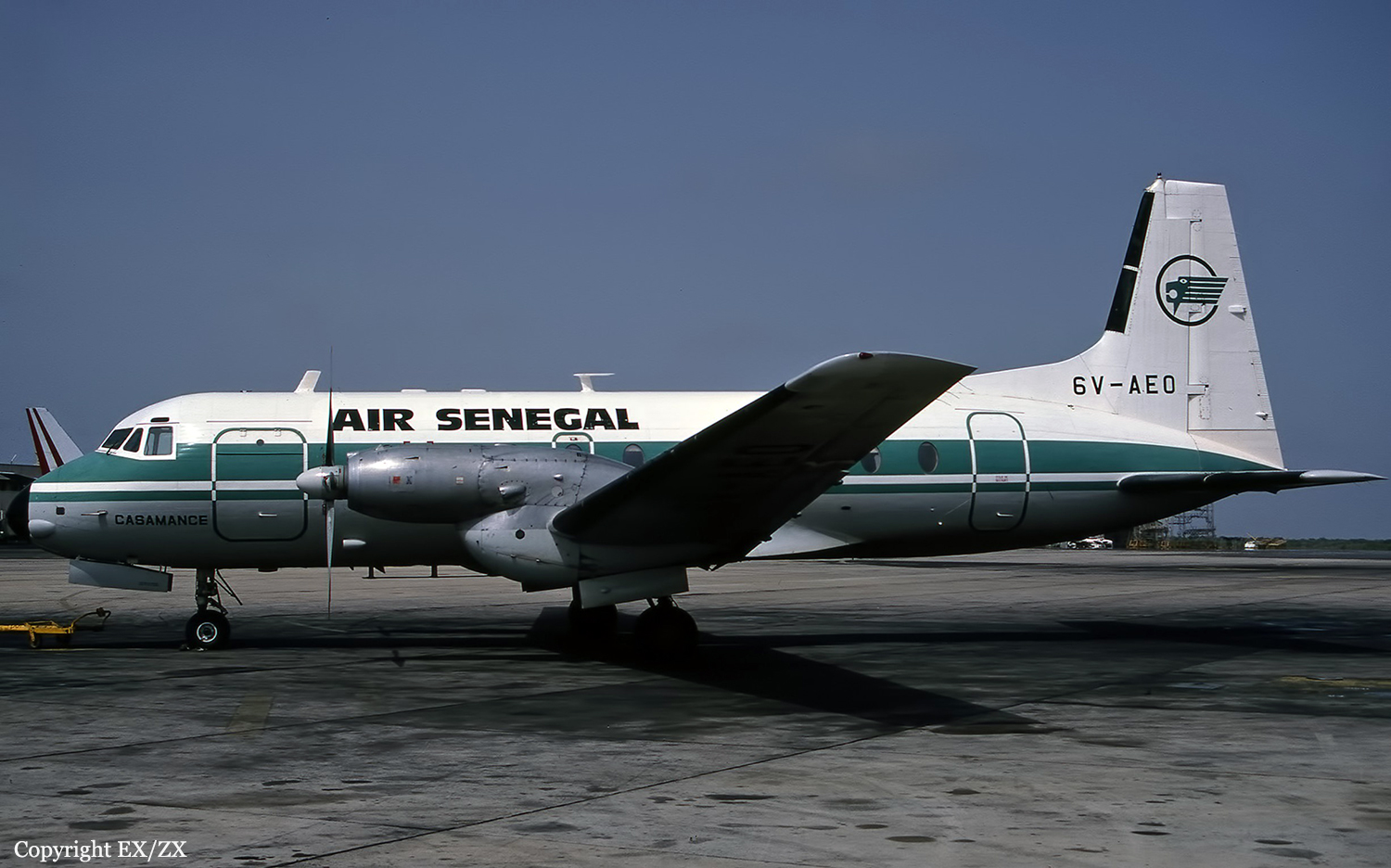 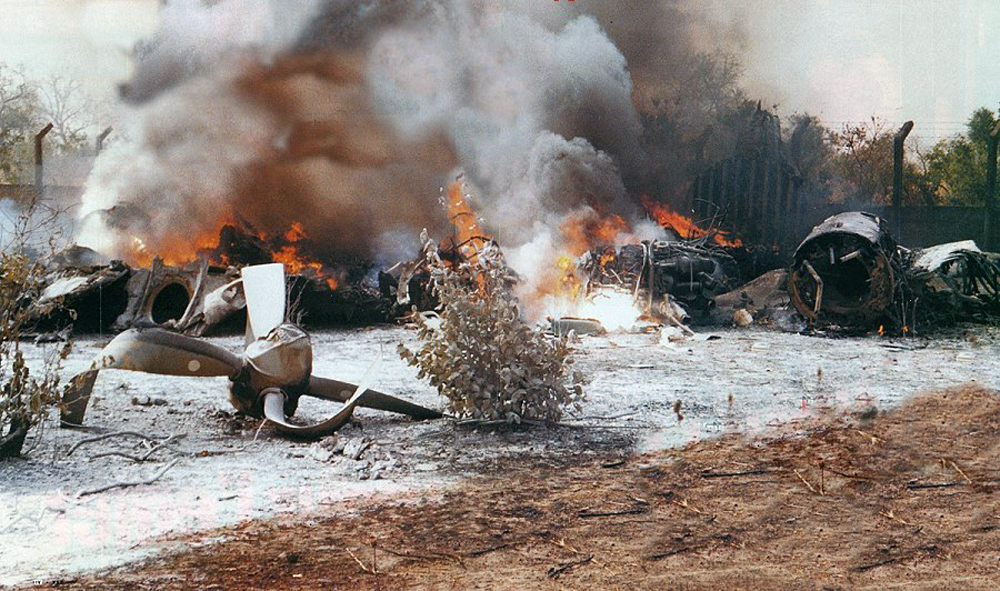 Registration:
YR-ABM
Flight Phase:
Landing (descent or approach)
Flight Type:
Cargo
Survivors:
Yes
Site:
Airport (less than 10 km from airport)
Schedule:
Dakar - Abidjan
MSN:
19272
YOM:
1967
Flight number:
RK153
Location:
Abidjan
Lagunes
Country:
Ivory Coast
Region:
Africa
Crew on board:
6
Crew fatalities:
Pax on board:
0
Pax fatalities:
Other fatalities:
Total fatalities:
0
Circumstances:
The approach to Abidjan-Félix Houphouët Boigny Airport was completed by night with a reduced visibility to 1,250 metres due to low isolated clouds. On short final, the aircraft struck the ground 30 metres short of runway 21 threshold. Upon impact, the undercarriage were torn off and the aircraft slid on its belly for few dozen metres before coming to rest. All six crew members evacuated safely while the aircraft was damaged beyond repair. 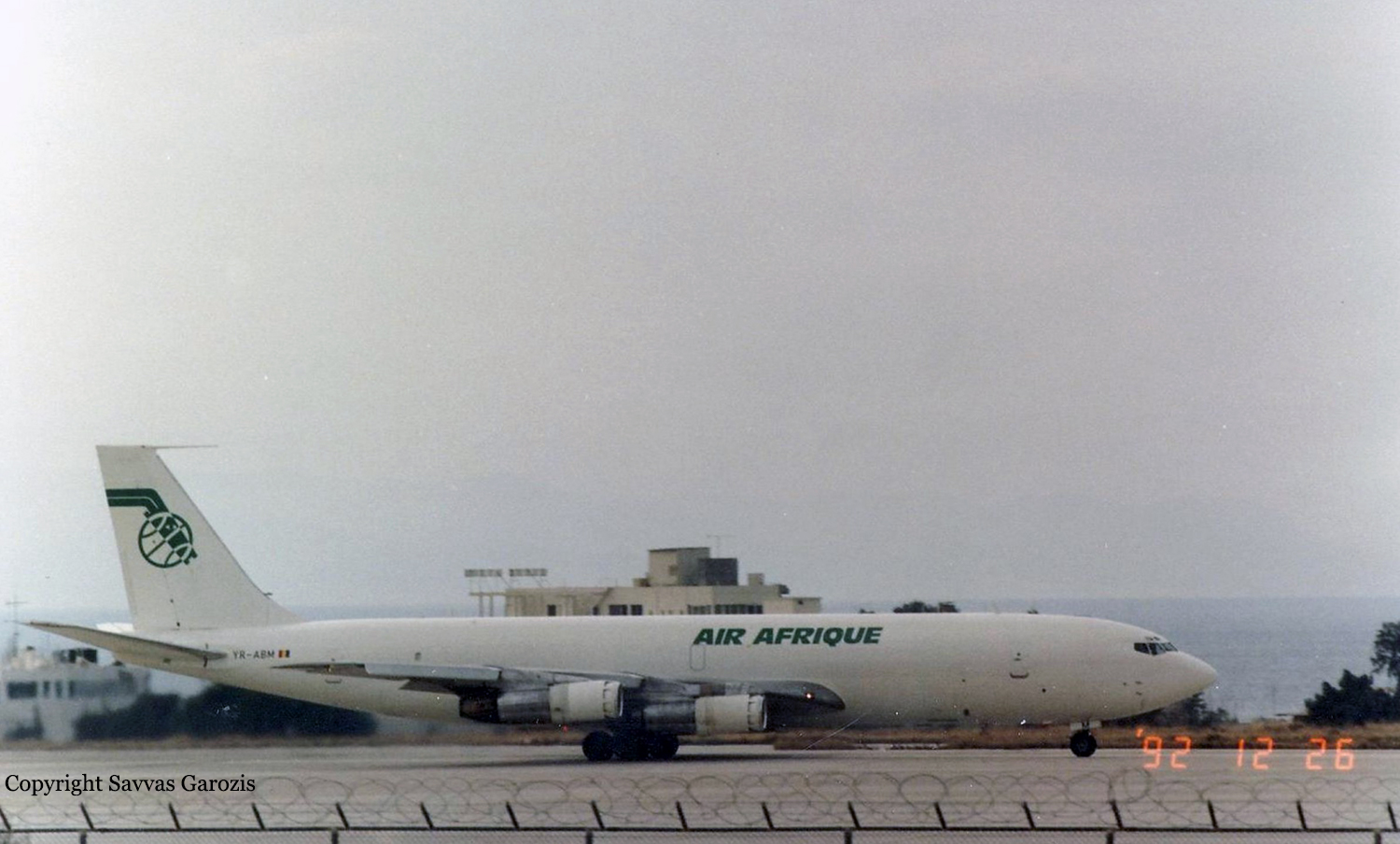 Crash of a Convair CV-640 in Kafountine: 31 killed

Type of aircraft:
Convair CV-640
Operator:
Gambcrest
Registration:
N862FW
Flight Phase:
Landing (descent or approach)
Flight Type:
Charter/Taxi (Non Scheduled Revenue Flight)
Survivors:
Yes
Site:
Plain, Valley
Schedule:
Dakar - Cap Skirring
MSN:
9
YOM:
1966
Location:
Kafountine
Ziguinchor Region
Country:
Senegal
Region:
Africa
Crew on board:
6
Crew fatalities:
Pax on board:
53
Pax fatalities:
Other fatalities:
Total fatalities:
31
Circumstances:
The aircraft was completing a charter flight from Dakar to Cap Skirring on behalf of the Club Mediterranée, carrying 53 tourists from France, Belgium and Switzerland and six crew members. By night, the crew started the descent prematurely when the aircraft struck trees and crashed in a swampy area located south of Kafountine, about 52 km north of Cap Skirring Airport runway 14. The aircraft was destroyed and 31 occupants were killed, among them all six crew members. At the time of the accident, weather conditions were good. Built in 1952, the aircraft was owned by a Gambian company near bankrupt and insurance bills have not been paid. Among the crew were one Russian stewardess, an American captain aged 67 and a Norwegian copilot aged 31. The were not familiar with the region and the aircraft was not maintain according to published procedures as at least 16 instruments were out of order at the time of the accident, among them one altimeter. The aircraft was operated illegally under the registration of its ex operator as the Gambian owner company failed to proceed to the official deregistration / re-registration of the aircraft. Thus the aircraft was not compliant with regulations in force.
Probable cause:
By night, the crew mistook the blue lights of an hotel for the approach lights of Cap Skirring Airport and initiated the approach and landing when the aircraft crashed 52 km north of the intended destination. The following contributing factors were reported:
- Poor flight planning,
- Poor planned approach,
- Poor crew coordination,
- The crew was not familiar with the area,
- Poor general state of the aircraft. 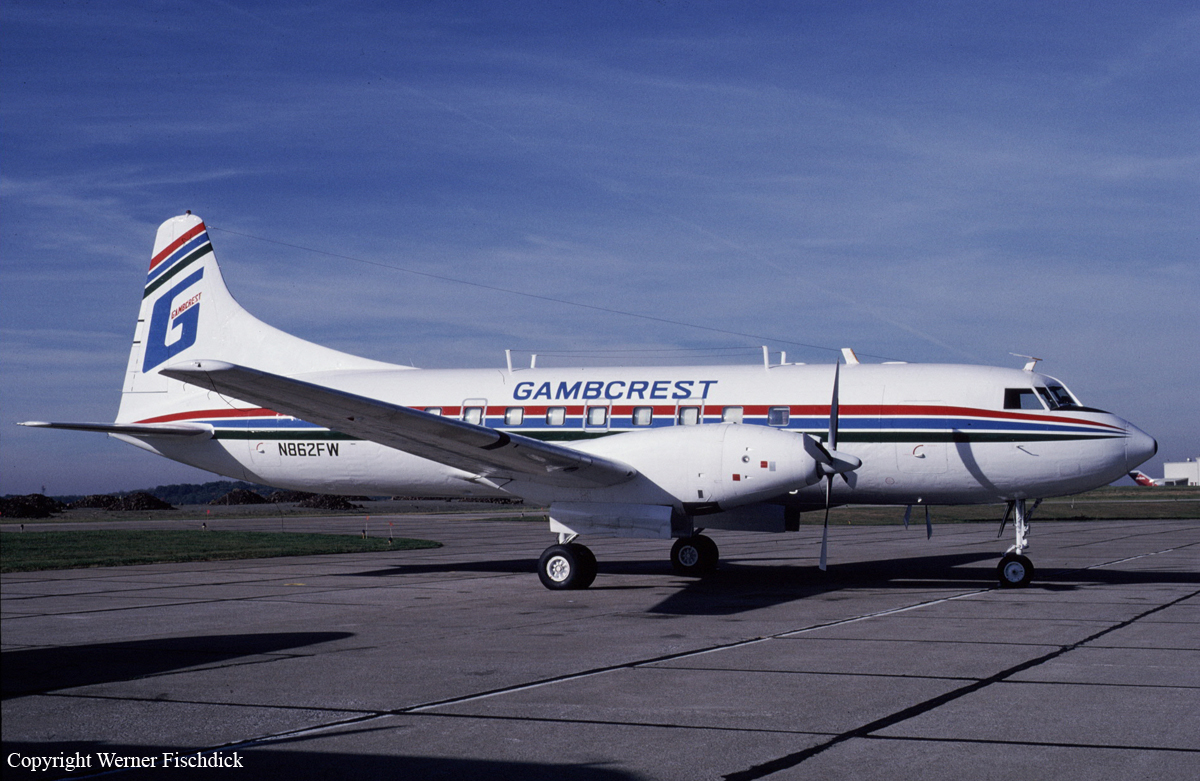 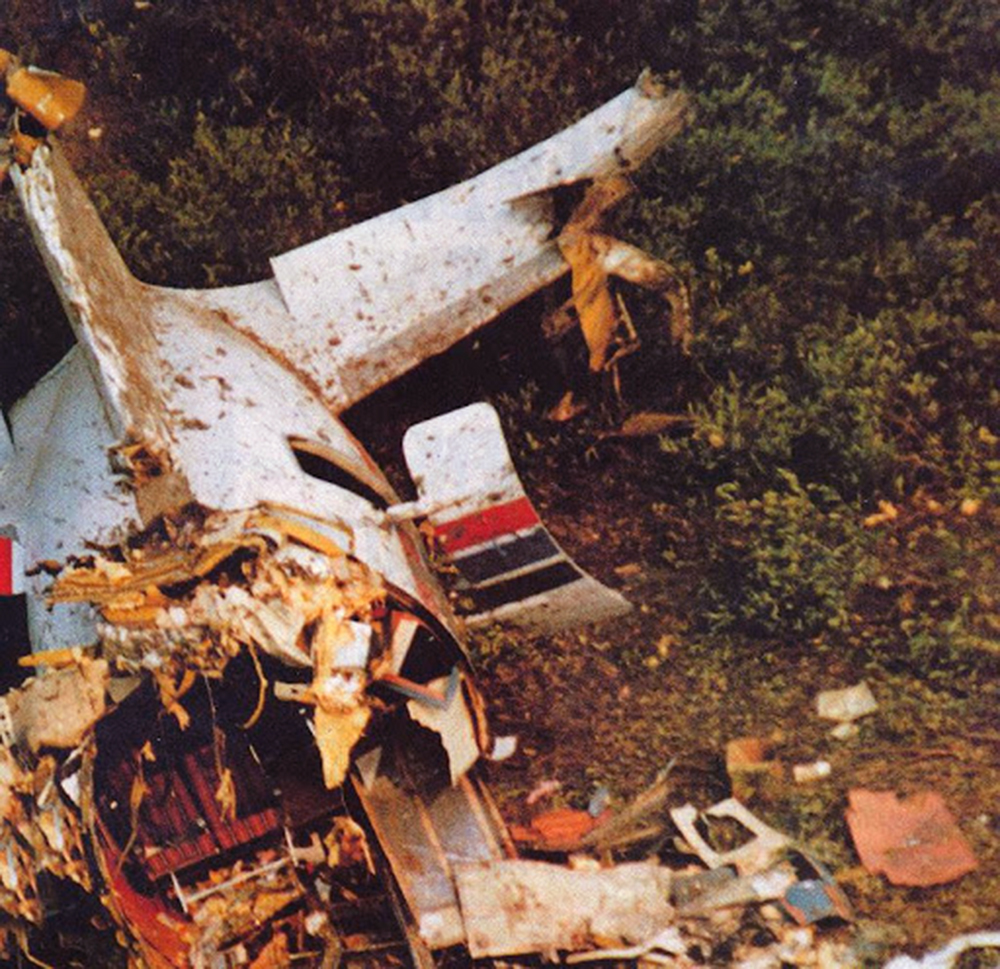 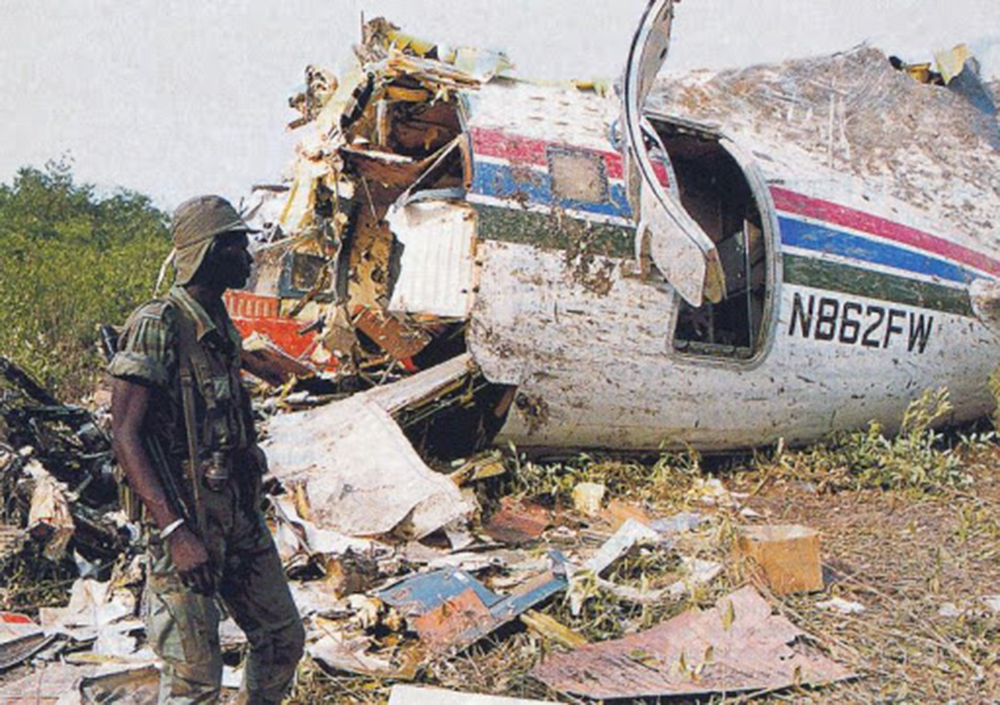 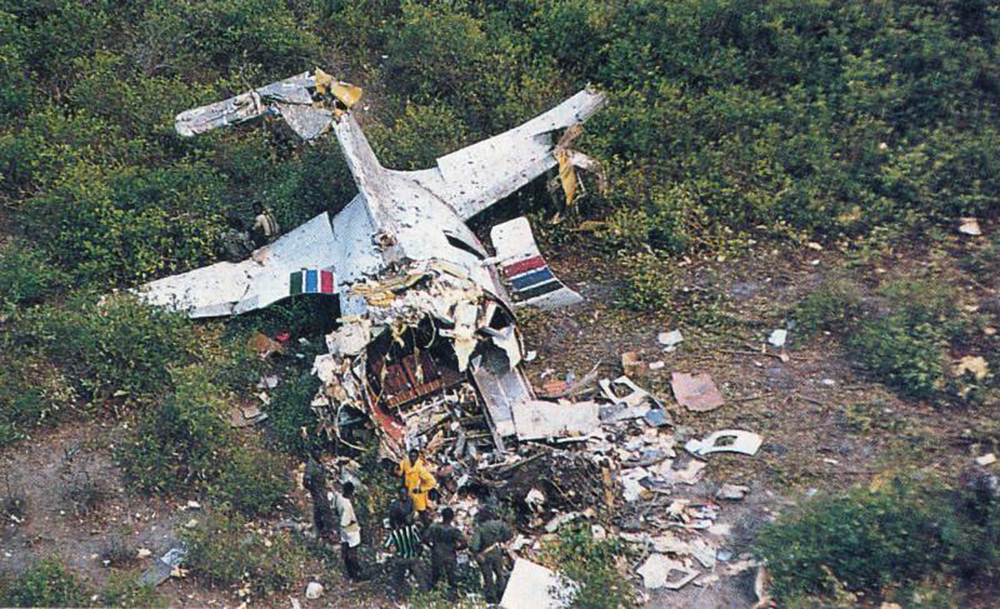 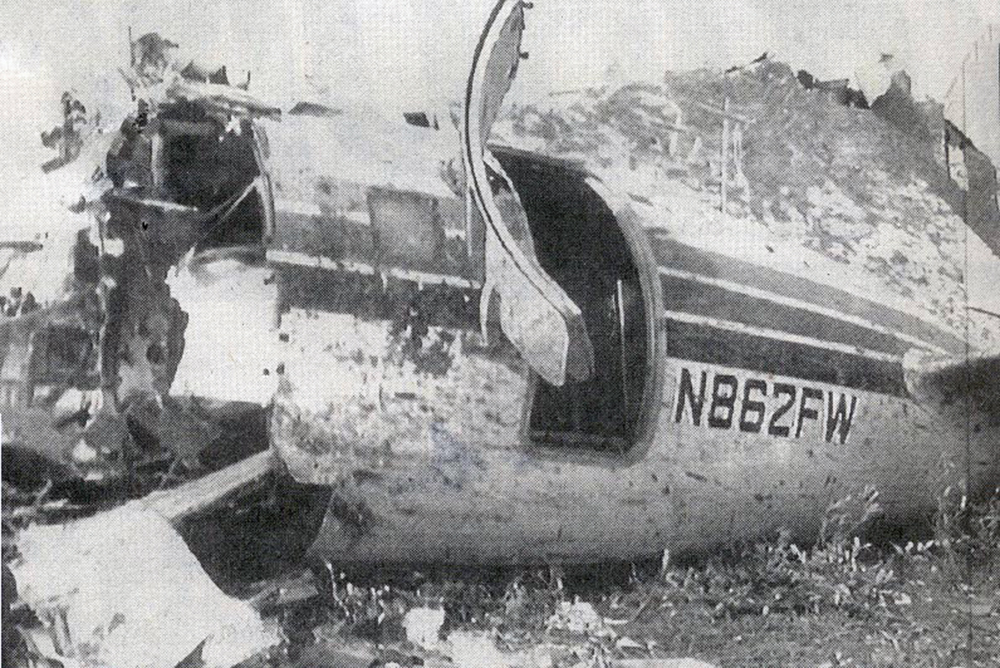 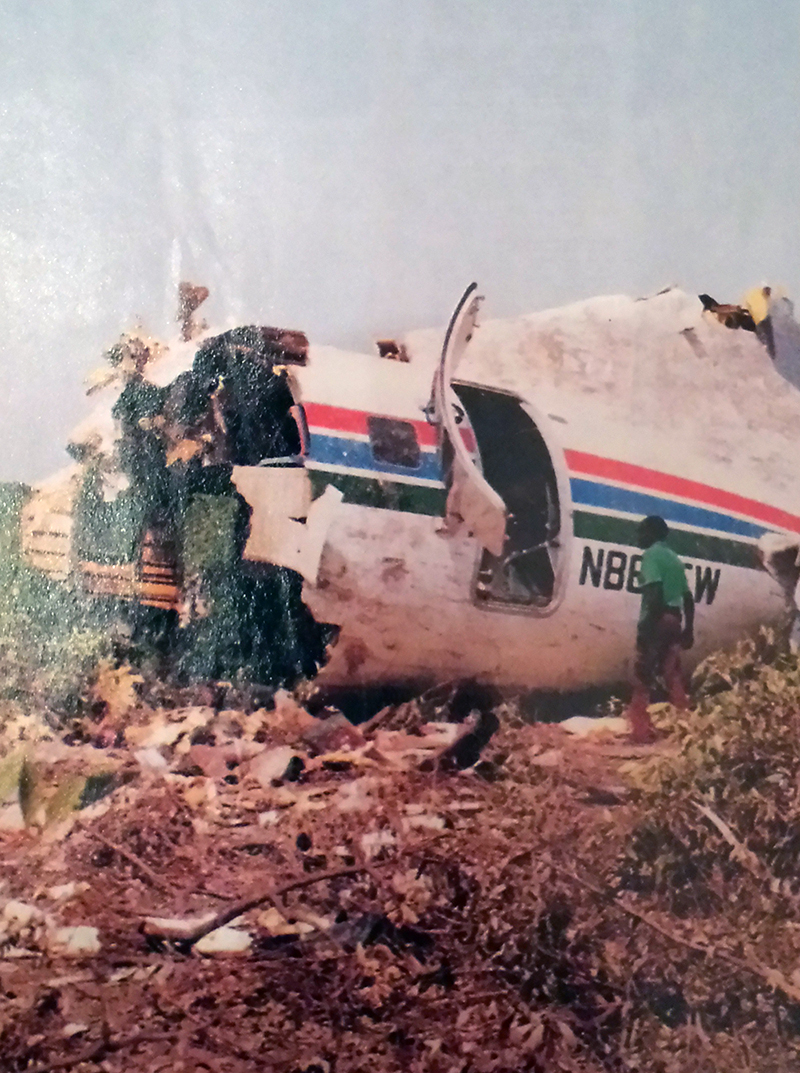 Registration:
N284
Flight Phase:
Flight
Flight Type:
Positioning
Survivors:
No
Site:
Desert
Schedule:
Dakar - Agadir
MSN:
45203
YOM:
1957
Location:
Bir Moghreïn
Tiris Zemmour
Country:
Mauritania
Region:
Africa
Crew on board:
5
Crew fatalities:
Pax on board:
0
Pax fatalities:
Other fatalities:
Total fatalities:
5
Circumstances:
En route from Dakar to Agadir, while cruising at the altitude of 11,000 feet, the aircraft was hit by a SAM-7 surface-to-air missile. An engine detached and out of control, the aircraft entered a dive and crashed in a desert area near Bir Moghreïn. All five occupants were killed. They were on their way to Agadir on behalf of the United States Agency for International Development.
Probable cause:
Shot down by a SAM-7 surface-to-air missile fired by soldiers of the Front Polisario. 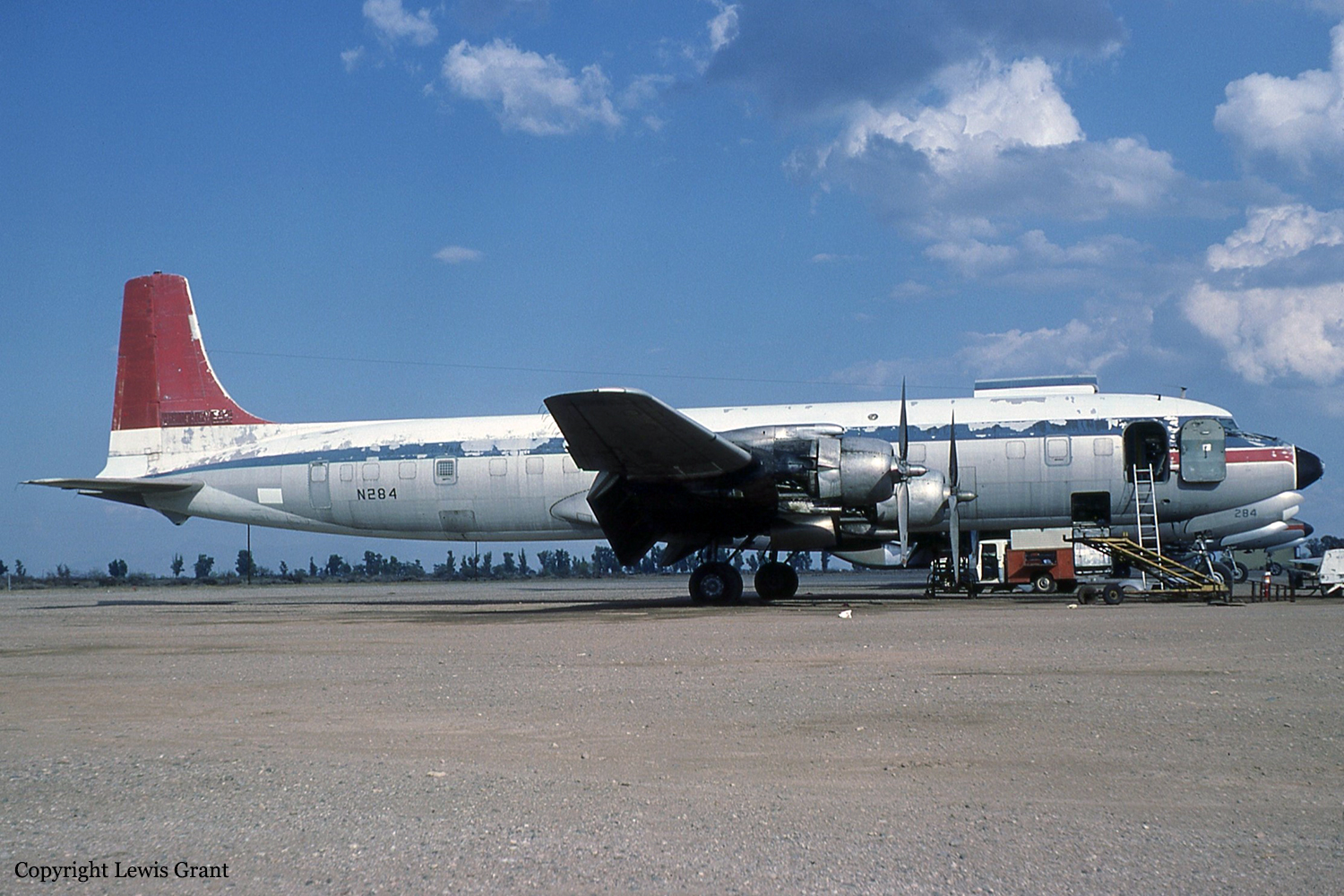 Type of aircraft:
Dornier DO228
Operator:

Registration:
D-IGVN
Flight Phase:
Flight
Flight Type:
Ferry
Survivors:
No
Site:
Desert
Schedule:
Dakar - Lanzarote
MSN:
7039
YOM:
1984
Flight number:
Polar 3
Location:
Dakhla
Oued Ed-Dahab-Lagouira
Country:
Western Sahara
Region:
Africa
Crew on board:
3
Crew fatalities:
Pax on board:
0
Pax fatalities:
Other fatalities:
Total fatalities:
3
Circumstances:
The crew was returning to Germany following an expedition in the South Pole (Antarctica). The aircraft departed Dakar on a leg to Lanzarote, and was following another Dornier DO228 from the same Alfred Wegener Institute christened Polar 2 that was flying higher than Polar 3. En route, the aircraft was shot down by a surface-to-air missile and crashed in a desert area located south of Dakhla. All three crew members were killed.
Probable cause:
Shot down by a surface-to-air missile from the Front Polisario.

Crash of a Nord 2501 Noratlas in the Niokolo Koba National Park: 9 killed

Crash of a Douglas C-47-DL in Nouakchott 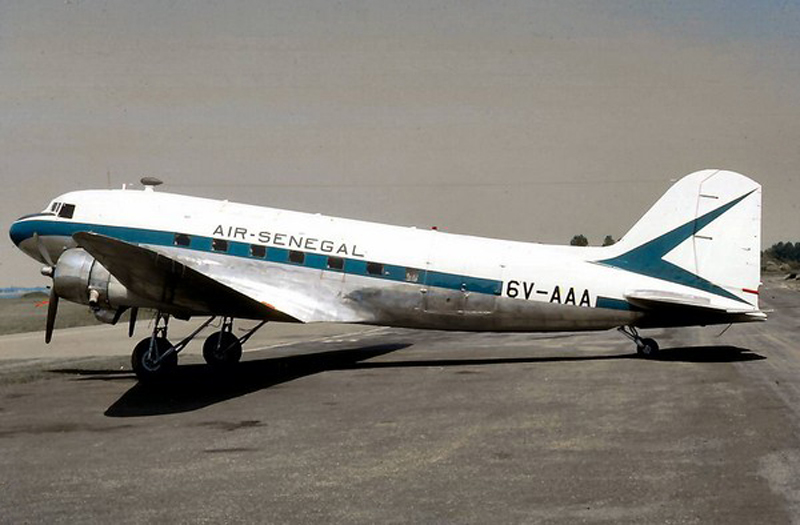