Crash of a Cessna S550 Citation S/II near George: 3 killed

Registration:
ZS-CAR
Flight Phase:
Flight
Flight Type:
Calibration
Survivors:
No
Site:
Mountains
Schedule:
George - George
MSN:
S550-0078
YOM:
1985
Location:
George
Western Cape
Country:
South Africa
Region:
Africa
Crew on board:
3
Crew fatalities:
Pax on board:
0
Pax fatalities:
Other fatalities:
Total fatalities:
3
Circumstances:
A Cessna S550 Citation S/II of the South African Civil Aviation Authority crashed into the Outeniqua mountains, near the town of Friemersheim. The three occupants were killed and the aircraft was destroyed. The Citation departed Port Elizabeth Airport (FAPE) on a positioning flight to George Airport (FAGG). On approach to FAGG, the flying crew requested to carry out a calibration flight for the very high frequency omnidirectional range (VOR) beacon at FAGG. Due to inclement weather conditions at the time, they were not cleared to conduct VOR calibration. As a result, they decided to land and refuel the aircraft before commencing with the calibration of the Instrument Landing System (ILS) on runway 11 at FAGG. The flying crew requested take-off from runway 11 and an early right turn to intercept radial 250°, 17 nautical miles (nm) DME arc to radial 330° at 3000 feet (ft) climbing to 4,000 feet. The air traffic control (ATC) granted their request. Radar data indicated that at 10:42, the aircraft took off from runway 11 and, once airborne, made a right-hand turn to intercept radial 250° using the George VOR (GRV VOR). The aircraft climbed to 3000ft. Once the aircraft reached 17 nm on the DME from the GRV VOR (DME is co-located with the VOR), it commenced with a right-hand turn to intercept radial 330° while maintaining 17nm DME arc. At 10:46, the ATC at FAGG advised the flying crew that they were now exiting controlled airspace and were advised to broadcast on the special rules frequency. The crew acknowledged the advisory to change frequency and there was no further communication. The aircraft was still being monitored by ATC using secondary surveillance radar. At 10:50, radar data showed the aircraft crossing radial 310° and entered a climb from 3000ft, reaching 3,900 feet. As the aircraft levelled off at 3,900 feet, a rapid descent occurred, and the aircraft lost 1500ft in approximately 9 seconds. Three seconds prior to impact, the aircraft nose pitched up before impacting a ridge at 2,192 feet. 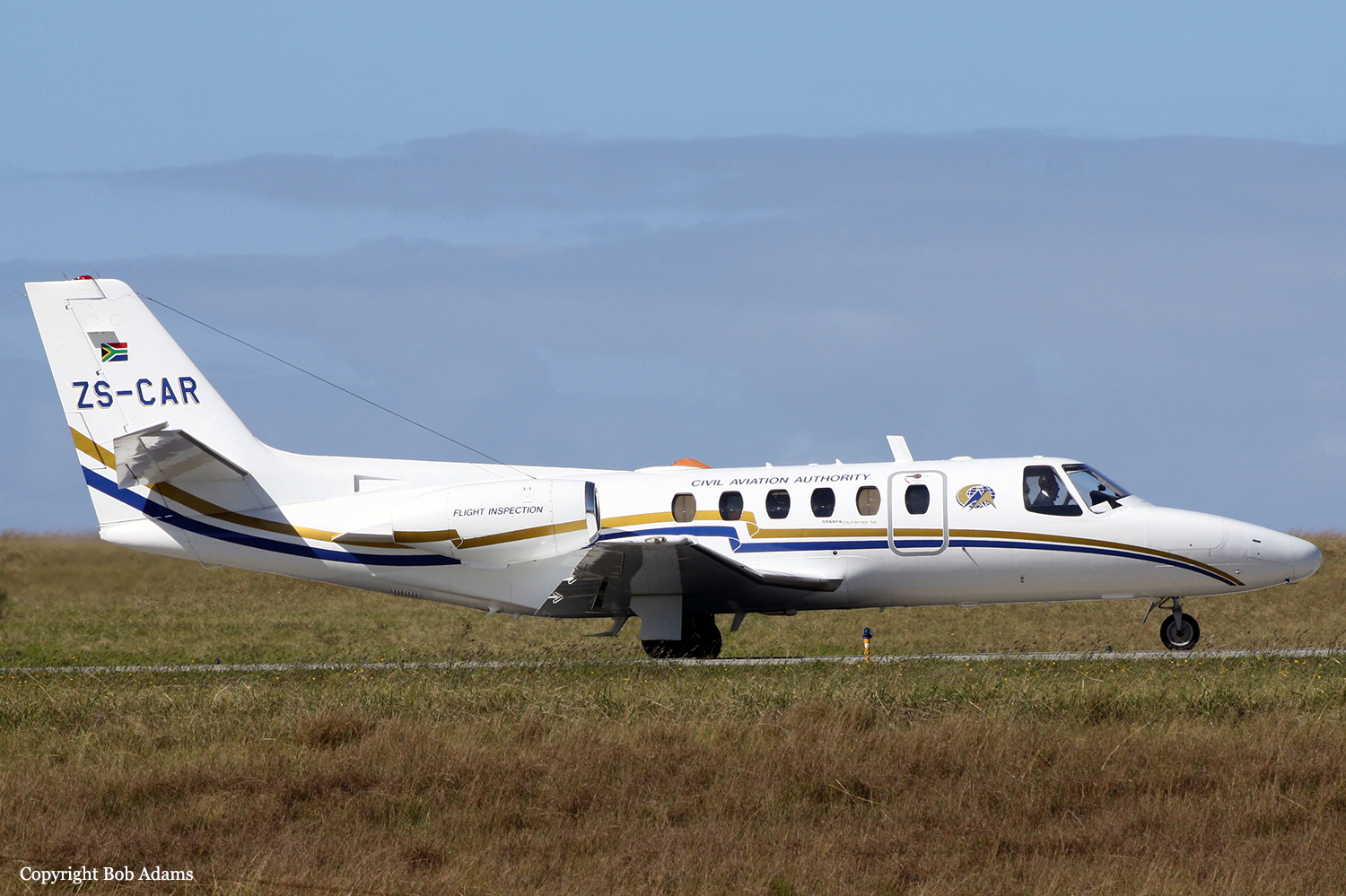 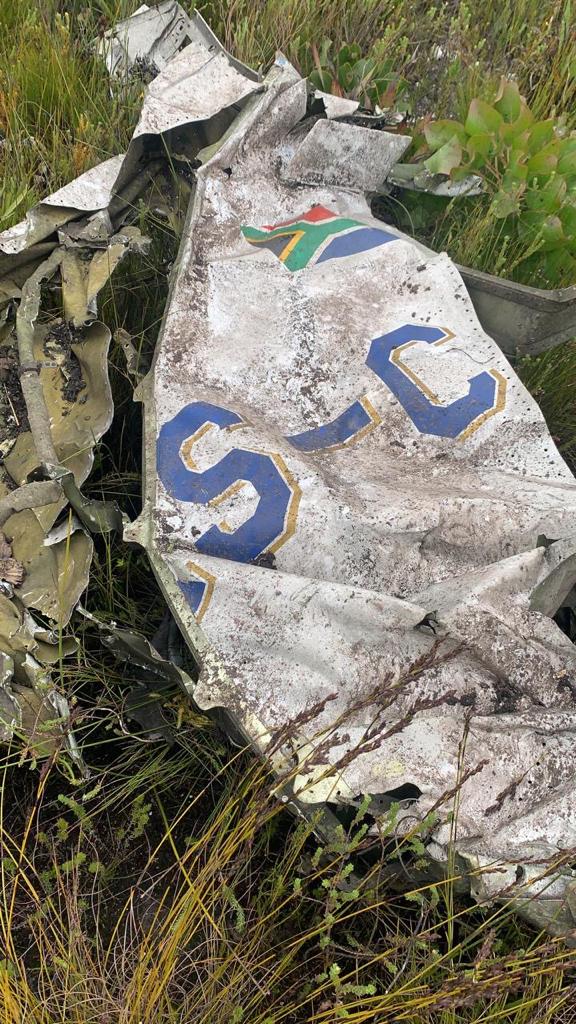 Crash of a Cessna 550 Citation II in Maraú: 5 killed

Type of aircraft:
Cessna 550 Citation II
Operator:
José João Abdalla Filho
Registration:
PT-LTJ
Flight Phase:
Landing (descent or approach)
Flight Type:
Private
Survivors:
Yes
Site:
Airport (less than 10 km from airport)
Schedule:
Jundiaí – Maraú
MSN:
550-0225
YOM:
1981
Location:
Maraú-Barra Grande
Bahia
Country:
Brazil
Region:
South America
Crew on board:
2
Crew fatalities:
Pax on board:
8
Pax fatalities:
Other fatalities:
Total fatalities:
5
Captain / Total flying hours:
8000
Captain / Total hours on type:
2500.00
Copilot / Total flying hours:
350
Copilot / Total hours on type:
25
Aircraft flight hours:
6978
Aircraft flight cycles:
6769
Circumstances:
The aircraft took off from the Comandante Rolim Adolfo Amaro Aerodrome (SBJD), Jundiaí - SP, to the Barra Grande Aerodrome (SIRI), Maraú - BA, at about 1458 (UTC), in order to carry out a private flight, with two pilots and eight passengers on board. Upon arriving at the destination Aerodrome, at 1717 (UTC), the aircraft made an undershoot landing on runway 11, causing the main and auxiliary landing gear to burst. The airplane moved along the runway, dragging the lower fuselage and the lower wing, leaving the runway by its left side, and stopping with the heading lagged, approximately, 210º in relation to the landing trajectory. Afterwards, there was a fire that consumed most of the aircraft. The aircraft was destroyed. One crewmember and four passengers suffered fatal injuries and the other crewmember and four passengers suffered serious injuries.

Probable cause:
Contributing factors.
- Control skills – a contributor
The inadequate performance of the controls led the aircraft to make a ramp that was lower than the ideal. This condition had the consequence of touching the ground before the runway’s threshold.
- Attention – undetermined
During the approach for landing, the commander divided his attention between the supervision of the copilot's activities and the performance of the aircraft's controls. Such circumstances may have impaired the flight management and limited the reaction time to correct the approach ramp.
- Attitude – undetermined
The report that the commander took two photographs of the runway and of the Aerodrome with his cell phone, during the wind leg, reflected an inadequate and complacent posture in relation to his primary tasks at that stage of the flight, which may have contributed to this occurrence.
- Communication – undetermined
As reported by the commander, the low tone and intensity of voice used by the copilot during the conduct of callouts, associated with the lack of use of the head phones, limited his ability to receive information, which may have affected his performance in management of the flight.
- Crew Resource Management – a contributor
The lack of proper use of CRM techniques, through the management of tasks on board, compromised the use of human resources available for the operation of the aircraft, to the point of preventing the adoption of an attitude (go-around procedure) that would avoid the accident, from the moment when the recommended parameters for a stabilized VFR approach are no longer present.
- Illusions – undetermined
It is possible that the width of the runway, narrower than the normal for the pilots involved in the accident, caused the illusion that the aircraft was higher than expected, for that distance from the thrashold 11 of SIRI, to the point of influence the judgment of the approach ramp. In addition, the fact that the pilot was surprised by the geography of the terrain (existence of dunes) and the coloring of the runway (asphalt and concrete), may have led to a false visual interpretation, which reflected in the evaluation of the parameters related to the approach ramp.
- Piloting judgment – a contributor
The commander's inadequate assessment of the aircraft's position in relation to the final approach ramp and landing runway contributed to the aircraft touching the ground before the thrashold.
- Perception – undetermined
It is possible that a decrease in the crew's situational awareness level resulted in a delayed perception that the approach to landing was destabilized and made it impossible to correct the flight parameters in a timely manner to avoid touching the ground before the runway.
- Flight planning – undetermined
It is possible that, during the preparation work for the flight, the pilots did not take into account the impossibility of using the perception and alarm system of proximity to the ground that equipped the aircraft, and the inexistence of a visual indicator system of approach ramp at the Aerodrome.
- Other / Physical sensory limitations – undetermined
The impairment of the hearing ability of the aircraft commander, coupled with the lack of the use of head phones, may have interfered with the internal communication of the flight cabin, in the critical phase of the flight.
Final Report: 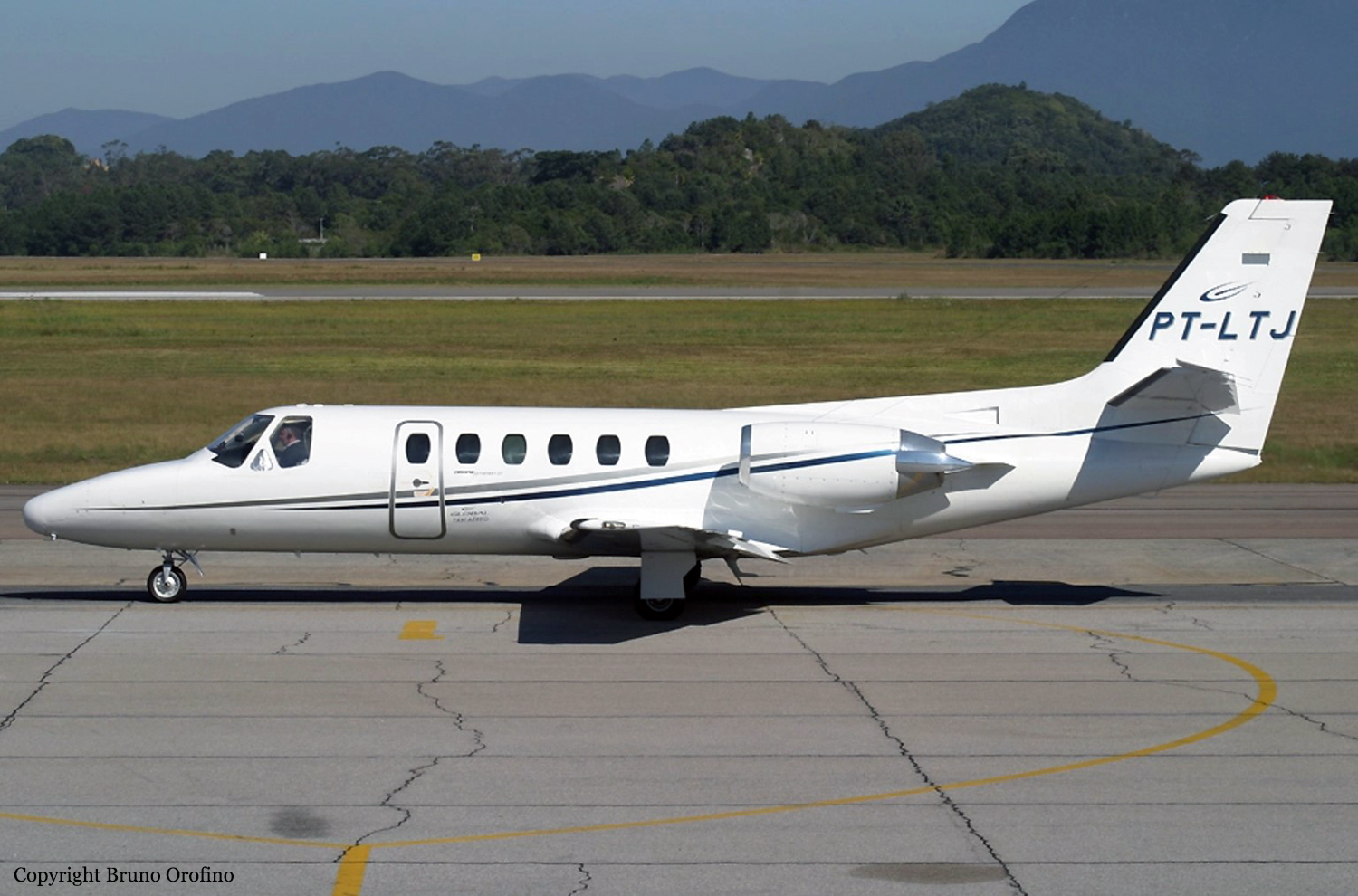 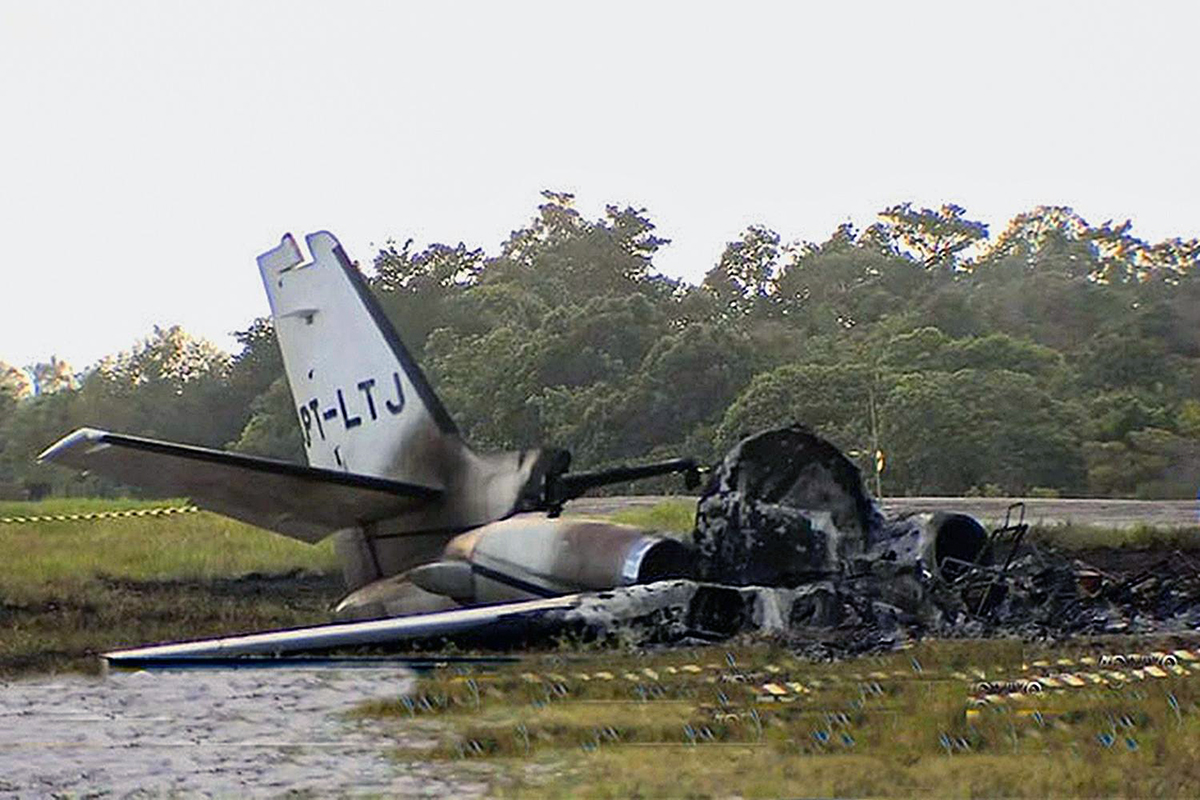 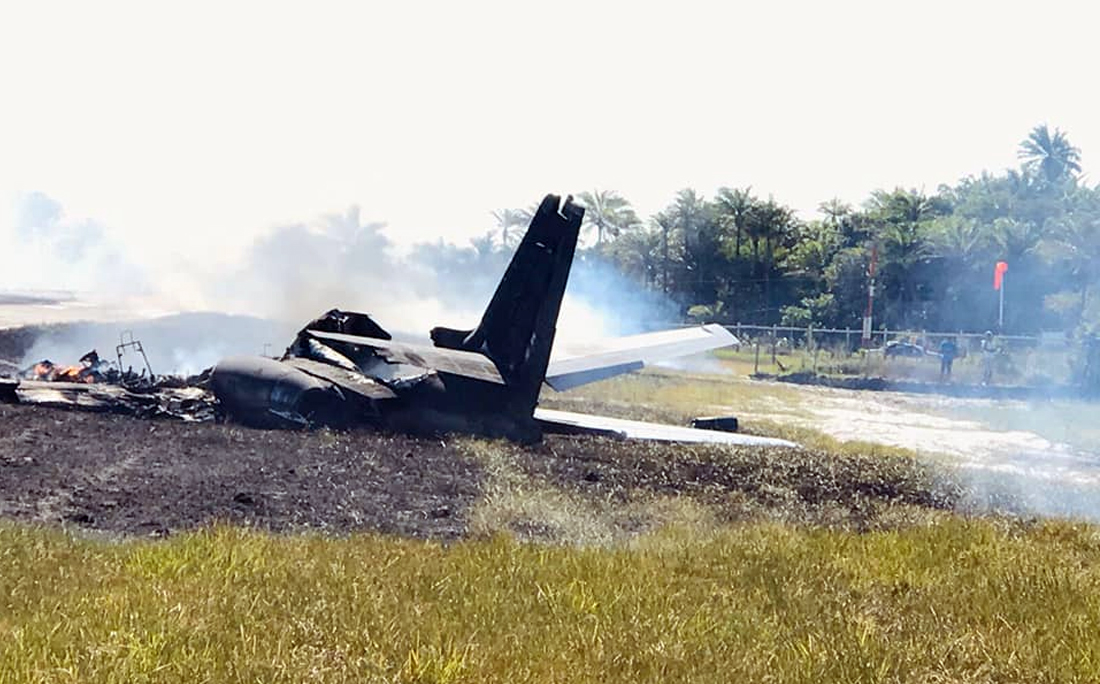 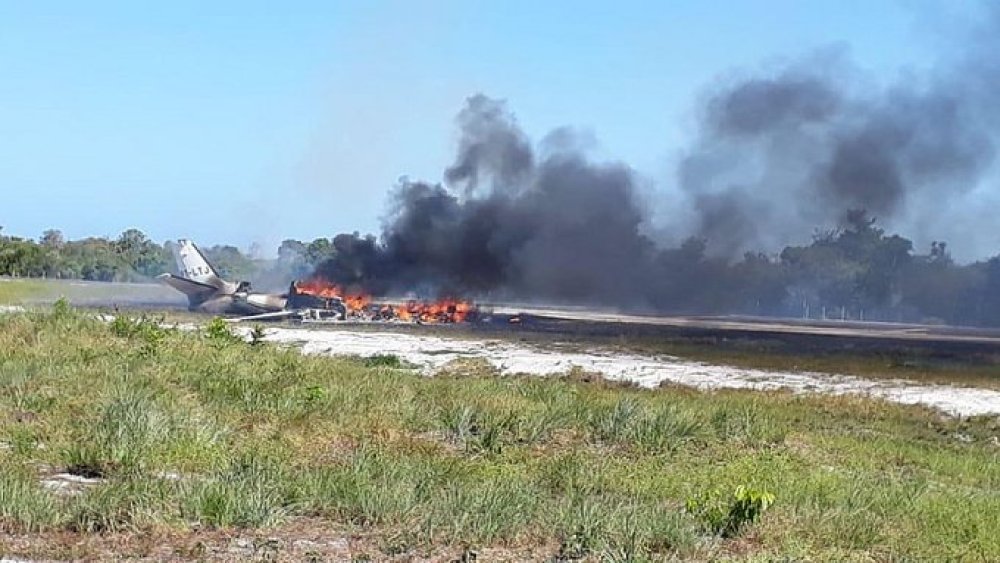 Crash of a Cessna 550 Citation II in Mesquite

Type of aircraft:
Cessna 550 Citation II
Operator:
Avia Jet
Registration:
N320JT
Flight Phase:
Landing (descent or approach)
Flight Type:
Private
Survivors:
Yes
Site:
Airport (less than 10 km from airport)
Schedule:
Pasco - Las Vegas
MSN:
550-0271
YOM:
1981
Location:
Mesquite
Nevada
Country:
United States of America
Region:
North America
Crew on board:
1
Crew fatalities:
Pax on board:
0
Pax fatalities:
Other fatalities:
Total fatalities:
0
Circumstances:
On July 19, 2019, about 1844 Pacific daylight time, a Cessna 550 airplane, N320JT, sustained substantial damage while landing at Mesquite Airport (67L), Mesquite, Nevada. The airline transport pilot, the sole occupant, had minor injuries. The airplane was registered to Avia Jet LLC, and operated by the pilot under the provisions of Title 14 Code of Federal Regulations Part 91 as a ferry flight. Visual meteorological conditions prevailed and an instrument flight rules (IFR) flight plan was filed for the cross-country flight. The flight departed Tri-Cities Airport (PSC), Pasco, Washington about 1625 and was destined for Henderson Executive Airport (HND), Las Vegas, Nevada. A surveillance video at 67L captured the airplane as it was sliding across the runway shortly after landing. The main landing gear had collapsed prior to entering the video frame and a large fire and dark smoke followed the airplane as it continued down the runway. The airplane disappeared from view as it exited the runway near the departure end of the runway. Shortly after the accident, the pilot was placed under arrest for operating an aircraft while under the influence of an intoxicating liquor. 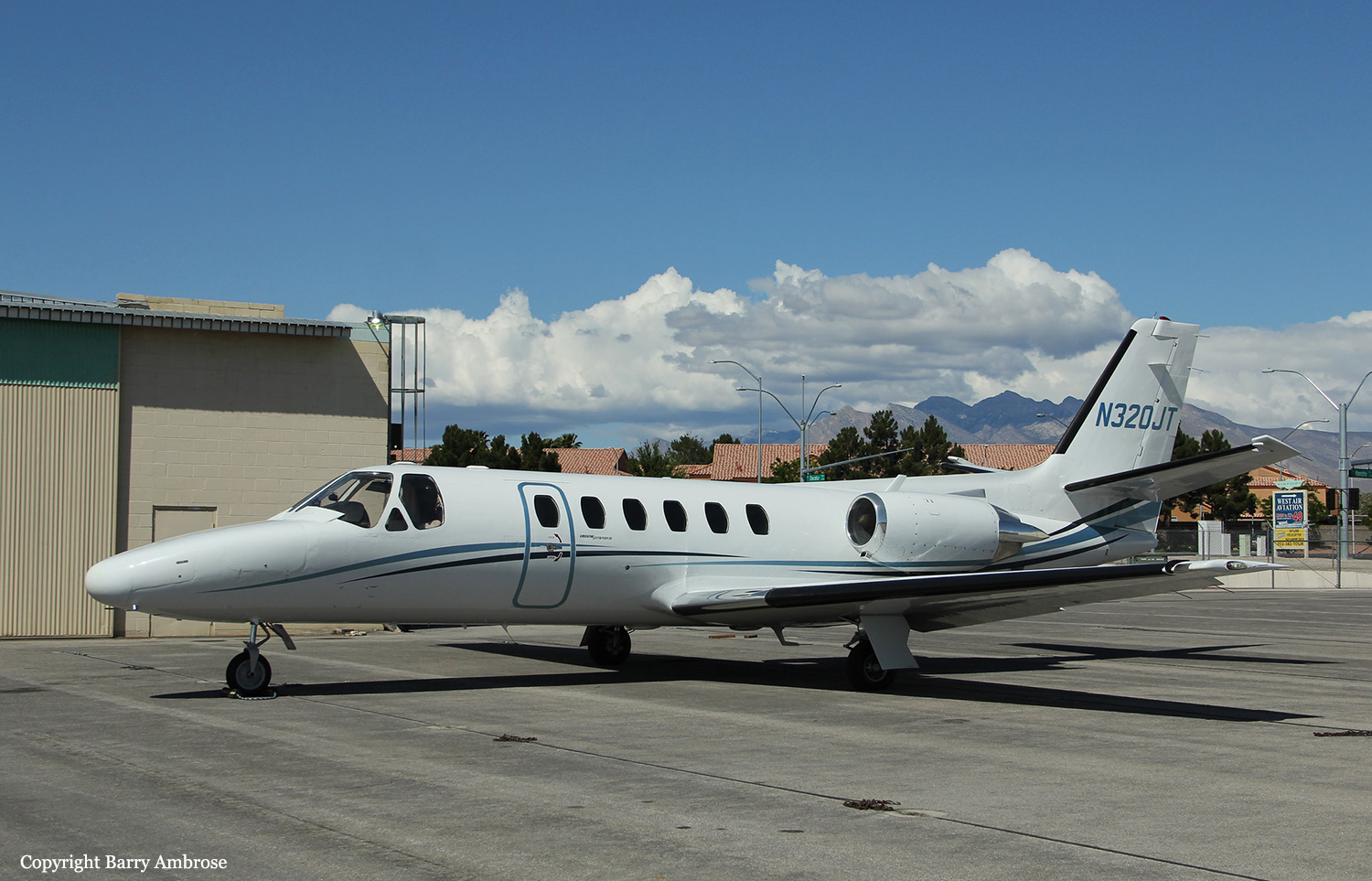 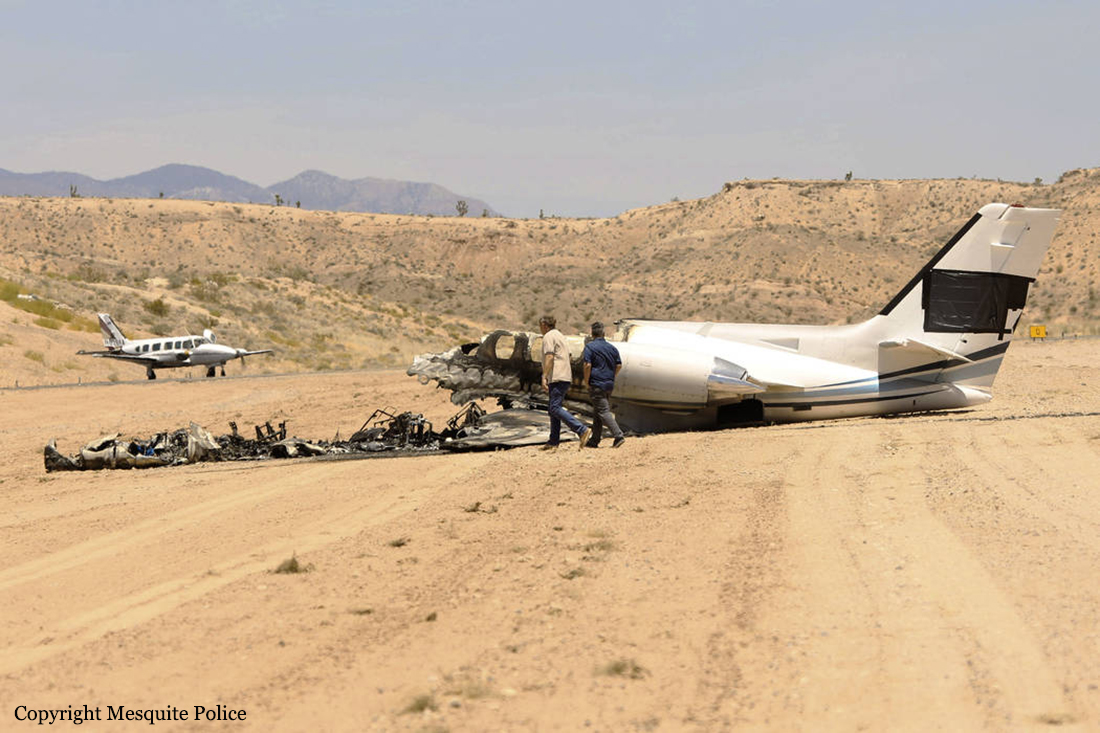 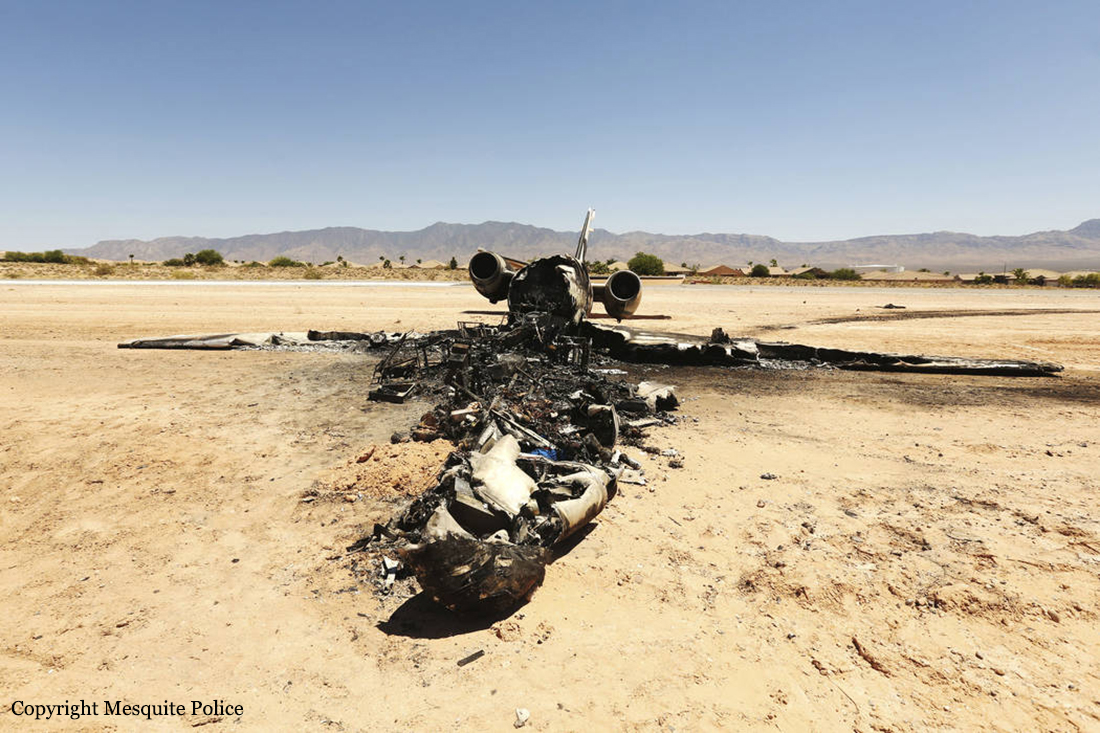 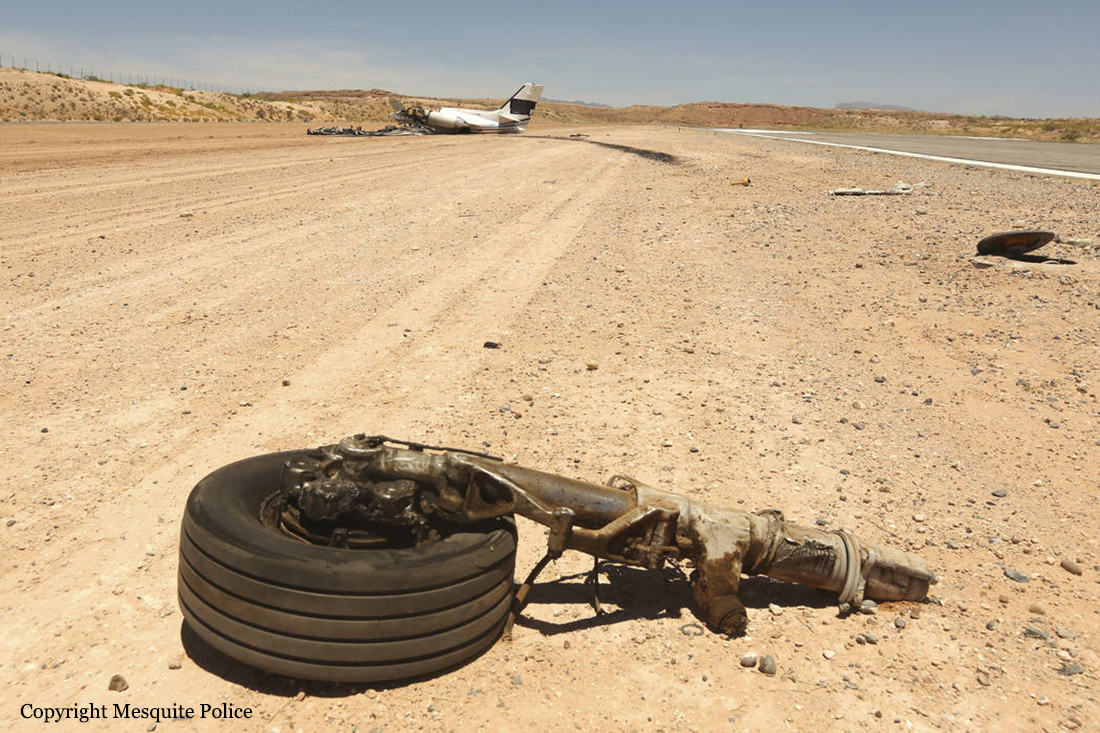 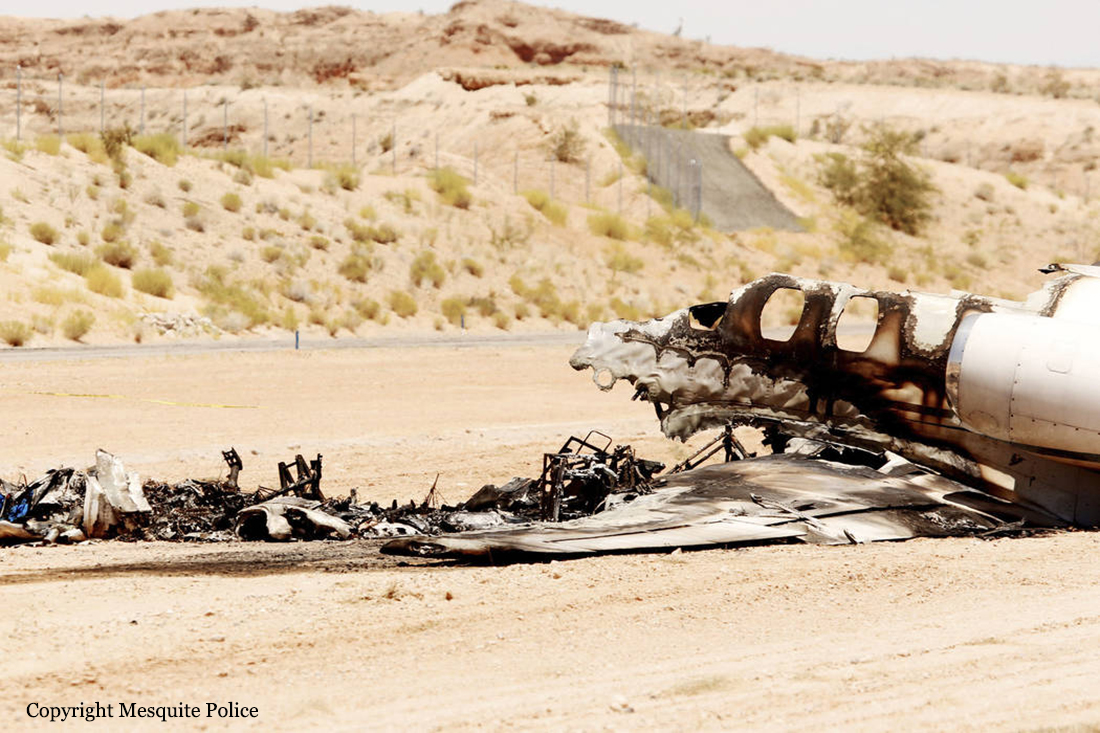 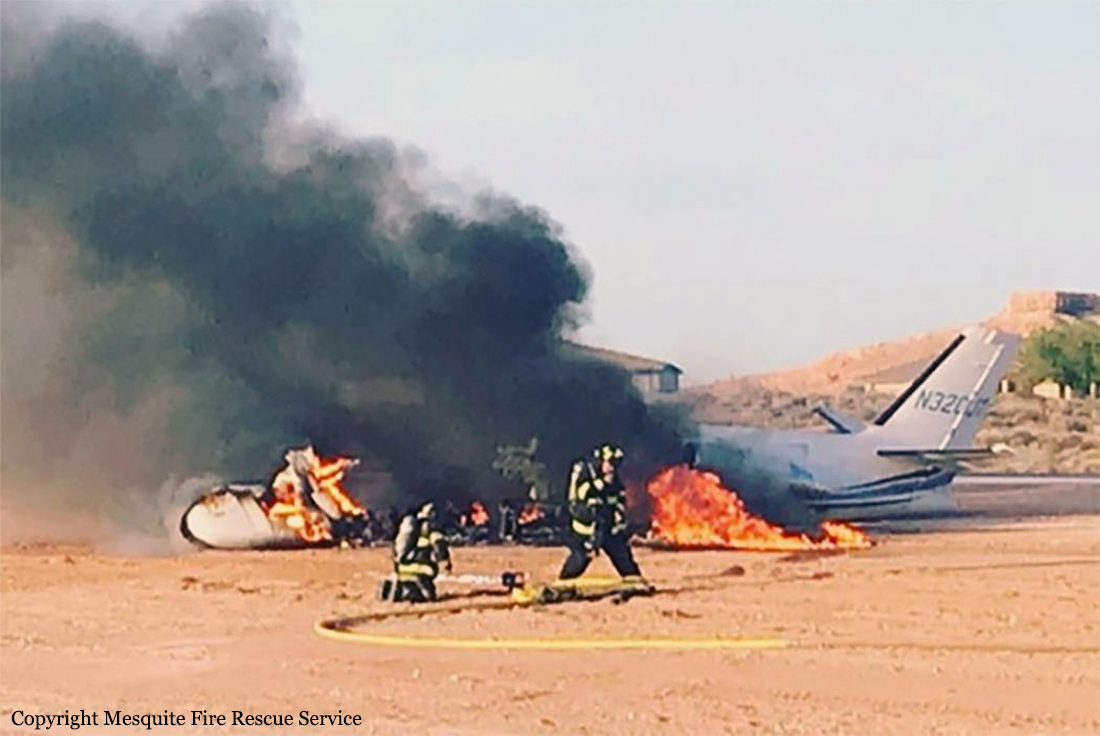