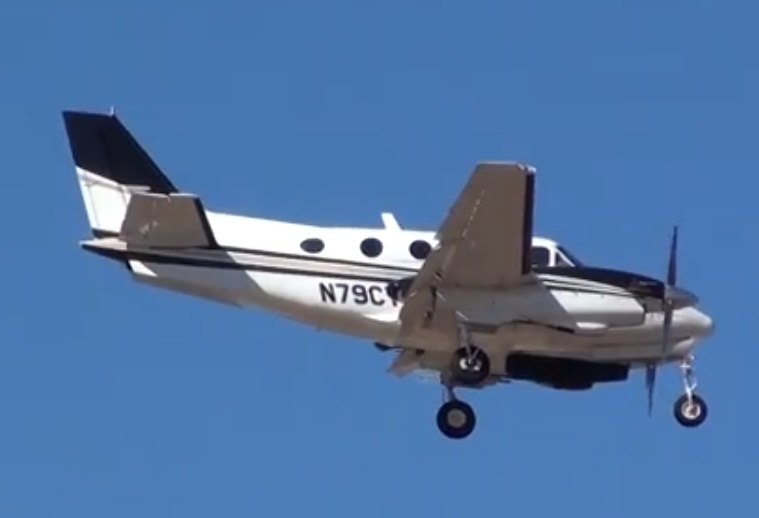 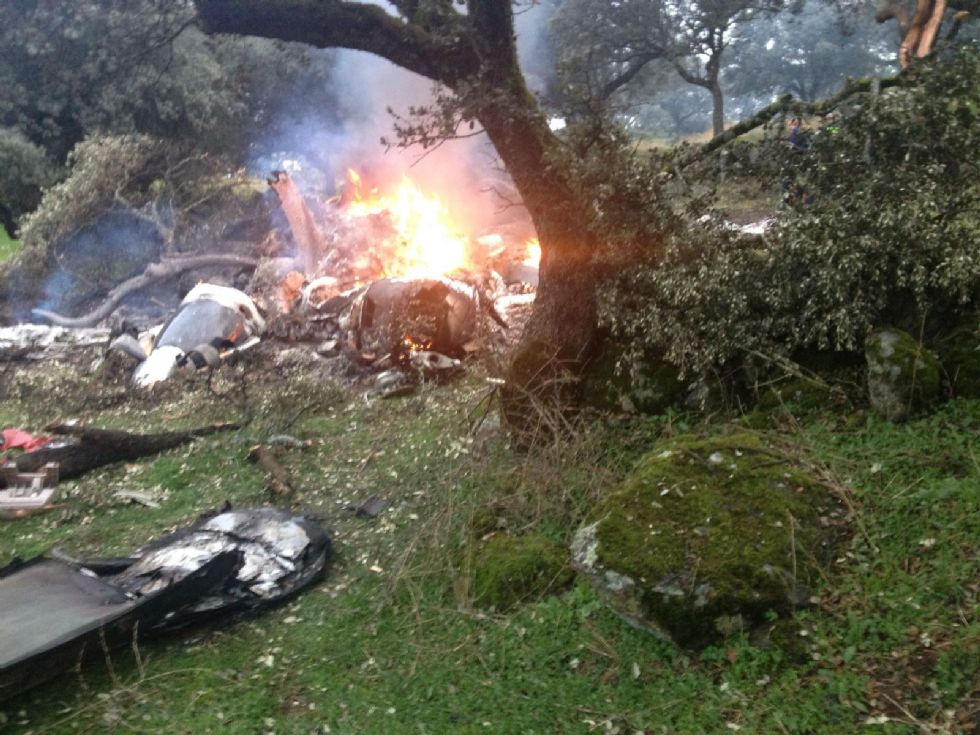 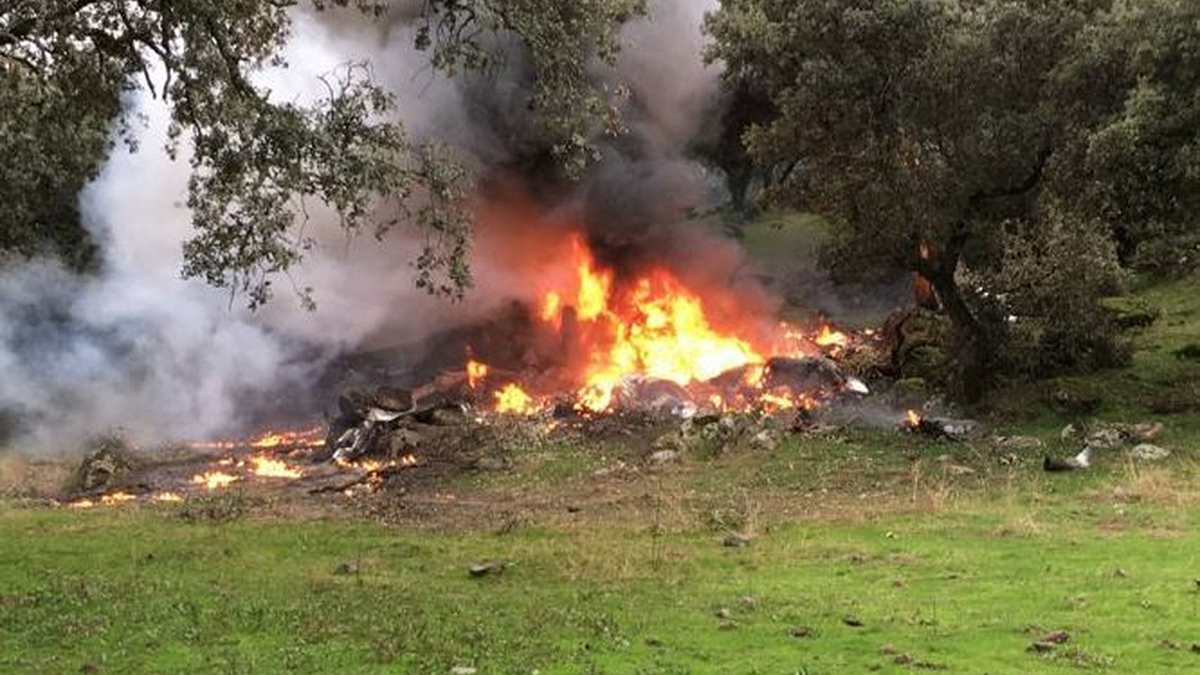 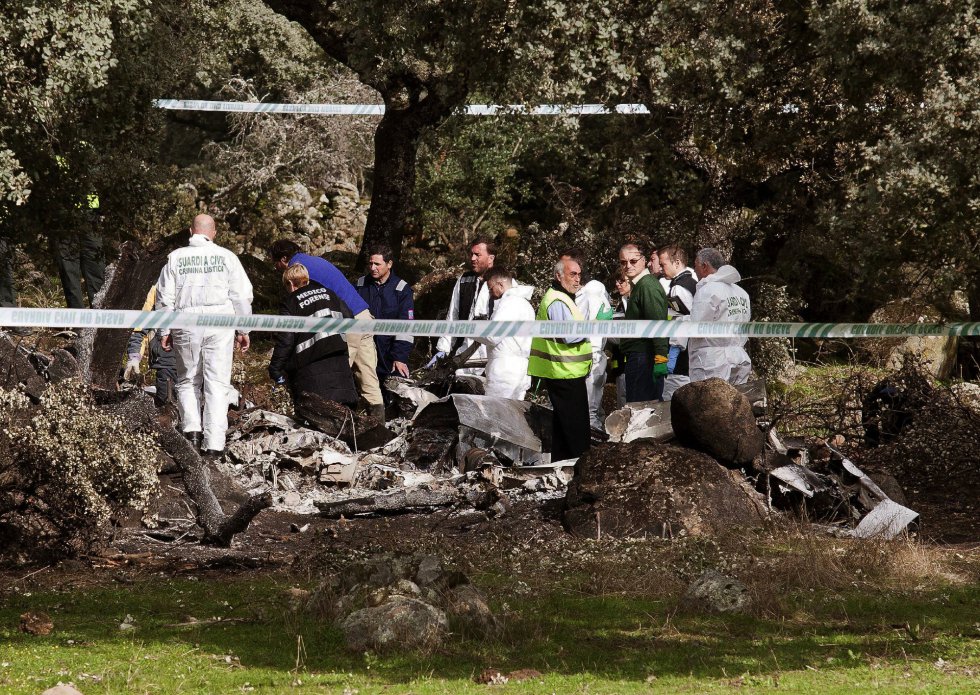 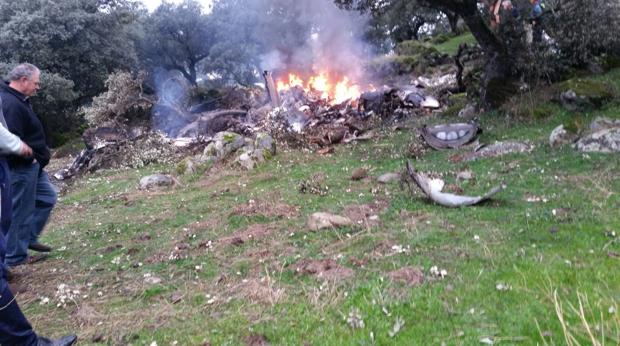 Crash of a Pilatus PC-6 Turbo Porter in Lillo: 2 killed

The single engine aircraft left Lillo y Villatobas aerodrome located in the Toledo Province in the afternoon for a training flight with 10 skydivers and one pilot on board. Few minutes later, the aircraft lost a wing. 9 skydivers could jump outside but were injured while falling down. The pilot and one skydiver could not jump out and were killed when the aircraft crashed in a vegetable patch located 3 km from Lillo's airport. 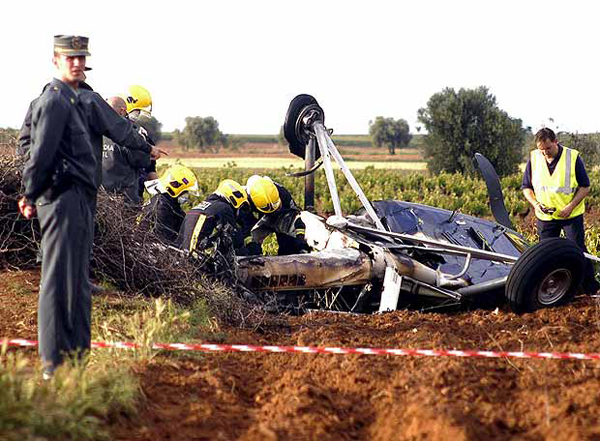 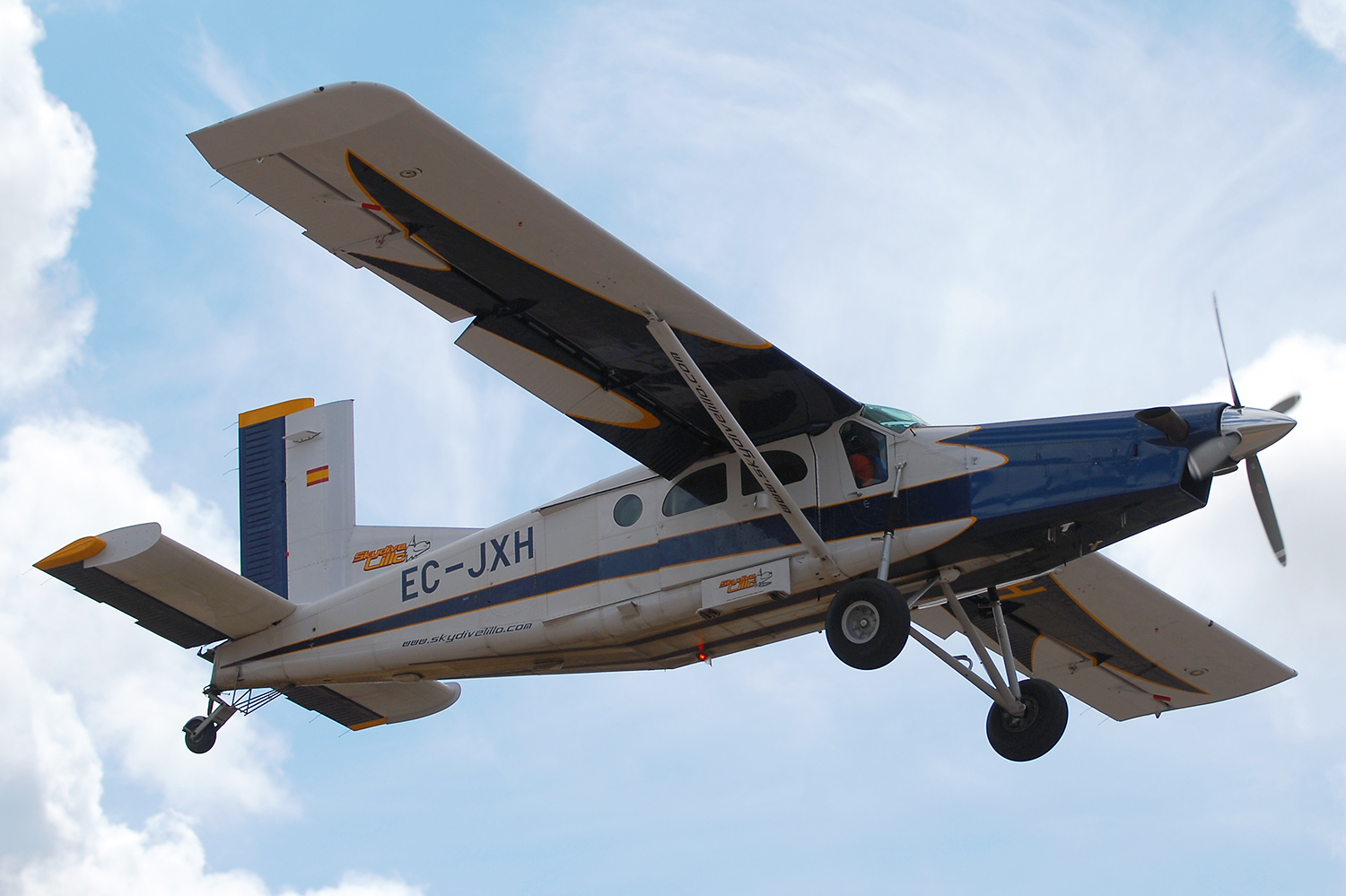 The pilot and the passenger were performing a reconnaissance flight for a paradropping mission. On landing, at a speed of 70 knots, the aircraft hit the ground, veered off runway and came to rest. Both occupants were uninjured while the aircraft was damaged beyond repair. Exact cause unknow.

Crash of a Beechcraft 65-A80 Queen Air in Valdepeñas

Registration:
EC-EZN
Flight Phase:
Takeoff (climb)
Flight Type:
Private
Survivors:
Yes
Site:
Airport (less than 10 km from airport)
Schedule:
Valdepeñas – Alicante
MSN:
LD-205
YOM:
1965
Location:
Valdepeñas
Castile-La Mancha
Country:
Spain
Region:
Europe
Crew on board:
1
Crew fatalities:
Pax on board:
1
Pax fatalities:
Other fatalities:
Total fatalities:
0
Captain / Total flying hours:
100
Circumstances:
Shortly after takeoff from Valdepeñas Airport runway 08, while in initial climb, both engines lost power. The pilot elected to make an emergency landing when the aircraft crashed in an open field located 3 km from the airfield. Both occupants escaped uninjured while the aircraft was damaged beyond repair.
Probable cause:
It was determined that both engines stopped simultaneously due to a fuel exhaustion. Investigations revealed that the aircraft remained parked at Valdepeñas Airport for five days without surveillance and it is believed that the fuel was stolen from the tanks. The pilot failed to prepare the flight according to published procedures and failed to realize the tanks were empty before departure. Nevertheless, he reported to the investigators that the fuel gauges were intermittently failing. 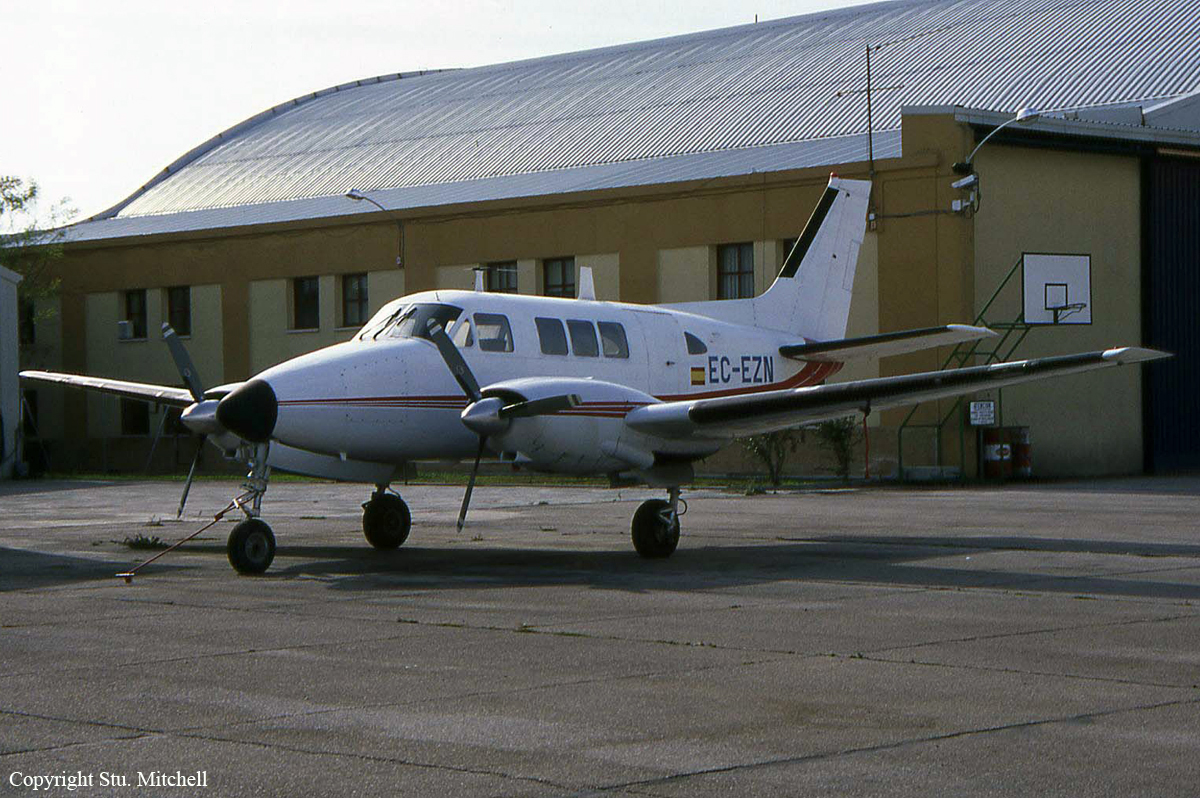 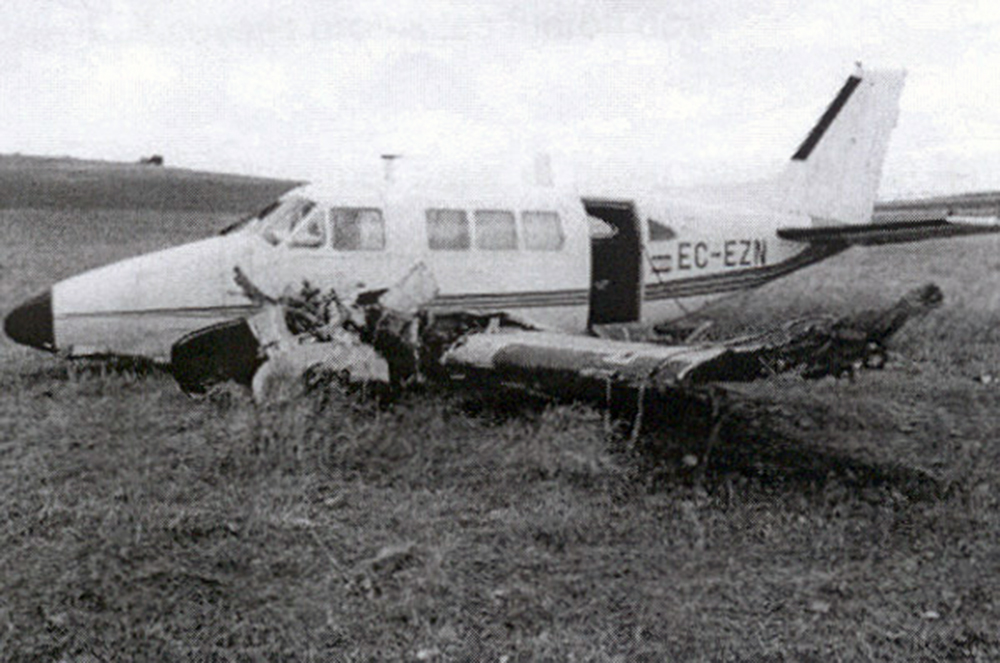 Registration:
5-283
Flight Phase:
Flight
Flight Type:
Military
Survivors:
No
Site:
Plain, Valley
Schedule:
Tehran - Madrid - McGuire
MSN:
19677/73
YOM:
1970
Flight number:
ULF48
Location:
Huete
Castile-La Mancha
Country:
Spain
Region:
Europe
Crew on board:
10
Crew fatalities:
Pax on board:
7
Pax fatalities:
Other fatalities:
Total fatalities:
17
Circumstances:
The airplane was completing a military logistic flight from Tehran to McGuire AFB via Madrid, carrying Iranian and US officers. The flight took off from Tehran at 08:20 GMT and climbed to a cruising altitude of FL330. After establishing contact with Madrid control, clearance was received to CPL VOR via Castejon. At 14:25 the flight was cleared to FL100. At 14:30 the crew advised Madrid that they were diverting to the left because of thunderstorm activity, and at 14:32 Madrid cleared ULF48 to 5,000 feet and directed him to contact Madrid approach control. At 14:33 the crew contacted approach control and advised them that there was too much weather activity ahead and requested to be vectored around it. Last radio contact was when ULF48 acknowledged the 260° heading instructions and informed Madrid that they were descending to 5,000 feet. The aircraft was later found to have crashed in farmland at 3,000 feet msl following left wing separation. The aircraft was totally destroyed and all 17 occupants have been killed.
Probable cause:
After analyzing all of the available evidence, it is concluded that the most probable sequence of events which culminated with multiple structural failures and separation of the wing began with an ignition of the fuel vapors in the n°1 fuel tank. The damage to the structure in the area of the tank provided positive indications of an explosion. The possibility that the explosion was a secondary result of structural failure caused by excessive aerodynamics forces developed during high velocity gusts and turbulence cannot be completely dismissed; however, the evidence and the probabilities of an aircraft's encountering these unique environmental conditions make this hypothesis less supportable.
Final Report:

Registration:
60-0368
Flight Phase:
Landing (descent or approach)
Flight Type:
Military
Survivors:
No
Site:
Mountains
Schedule:
Mildenhall - Madrid
MSN:
18143/482
YOM:
1961
Location:
Cabanillas del Campo
Castile-La Mancha
Country:
Spain
Region:
Europe
Crew on board:
8
Crew fatalities:
Pax on board:
0
Pax fatalities:
Other fatalities:
Total fatalities:
8
Aircraft flight hours:
5481
Circumstances:
While descending to Torrejón Airbase by night and limited visibility, the crew failed to realize his altitude was too low when the airplane struck the slope of a mountain located in Cabanillas del Campo, about 22 km northeast of the airport. The aircraft was destroyed and all eight crew members were killed.
Probable cause:
Controlled flight into terrain.

Registration:
63-8077
Flight Phase:
Landing (descent or approach)
Flight Type:
Military
Survivors:
Yes
Site:
Mountains
Schedule:
Athens - Madrid - McGuire
MSN:
6008
YOM:
1963
Location:
Hueva
Castile-La Mancha
Country:
Spain
Region:
Europe
Crew on board:
8
Crew fatalities:
Pax on board:
17
Pax fatalities:
Other fatalities:
Total fatalities:
24
Aircraft flight hours:
14372
Circumstances:
The C-141 departed Athens for a night-time flight to Madrid, the first leg of a flight back to McGuire AFB. The crew were cleared for an ILS approach to Torrejon's runway 23. Weather was reported as 20,000 foot overcast, with 10 NM visibility. During the descent the crew forgot to use the Descent Checklist. Thus, the crew had failed to set their altimeters from 29.92" to the local altimeter setting of 30.17". Additionally, they did not turn on the radar altimeter. While at FL60 the crew was given a clearance to a lower altitude. Because of heavy radio traffic, the clearance was garbled. They were not sure if the controller had cleared them down to 5000 or 3000 feet. They agreed that it must have been 3000 feet. They read back "three thousand feet", but the controller failed to notice the error. When reporting "passing 5000 for 3000" to another controller, the error again was not noticed. Nearing 3000 feet, the navigator noticed a hill ahead and above their altitude, but the pilot reassured him that "everything looks clear ahead", with the lights of the air base visible in the valley below. At an altitude of 3050 feet, at a speed of 250 kts, the airplane impacted terrain near the edge of a plateau, 40 km east of the Torrejón Air Force Base. It became airborne again, rolled over and disintegrated in a field. The navigator survived while 24 other occupants were killed.
Crew:
Cpt Clinton Clifford Corbin, pilot, †
Cpt Thomas R. Dietz, pilot, †
1st Lt William A. Kuhn, copilot, †
T/Sgt Edward Peter Babcock, flight engineer, †
T/Sgt Donald R. Wells, flight engineer, †
Maj Friedrich Hugo Lamers, navigator, †
1st Lt William Haskel Ray, navigator
T/Sgt Sidney Nathaniel Hillsman, load master. †
Passengers:
Cpl Edward Anthony Fanelli,
Lt Col Austin Frederick Balkman
Teresa Ann Wilcox
T2c Donald Lee Rhodes
Charles 'Chuck' Edward Hyatt
William Moore O'Connor
Cpl Sandra Rae Canton
Sgt Barry Gale Canton
Georgia Lord
Charles Edward Lord
Monteal Massey
Frank Bullard Massey
Janice Lynn Barron
Clifford Elbert Barron
Michael L. Merricks
Robert L. Holloway
Lt Chris Louis Katsetos.
Probable cause:
No technical anomalies were found in the airplane and its components, equipment and instruments. The flying crew failed to follow approach procedures and descended to an unsafe altitude following a misinterpretation of the ATC clearance. A lack of crew coordination, a wrong planned approach and crew fatigue (eight hours of rest during last 60 hours) were considered as contributing factors. 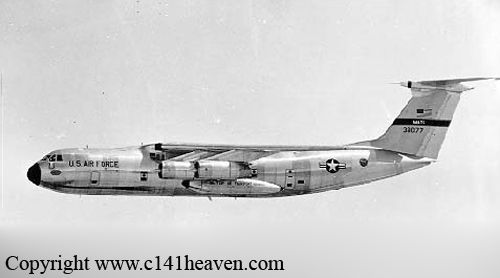 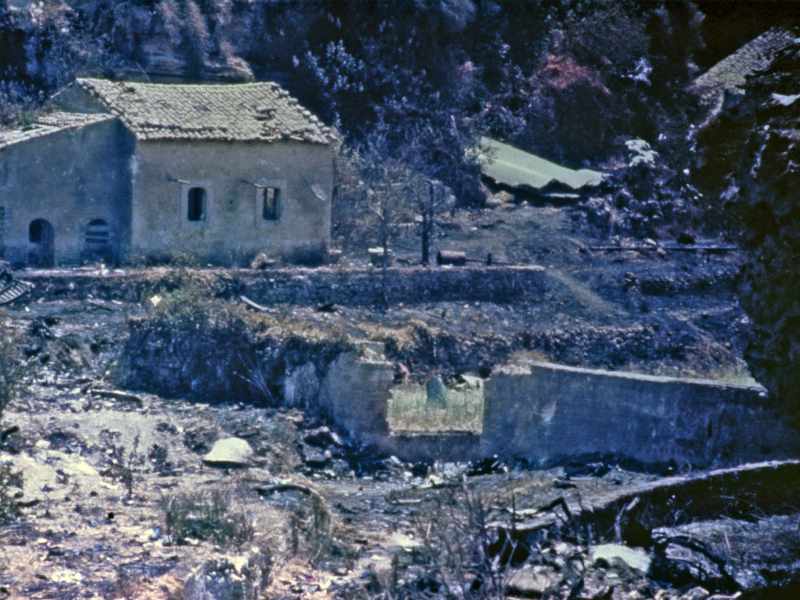 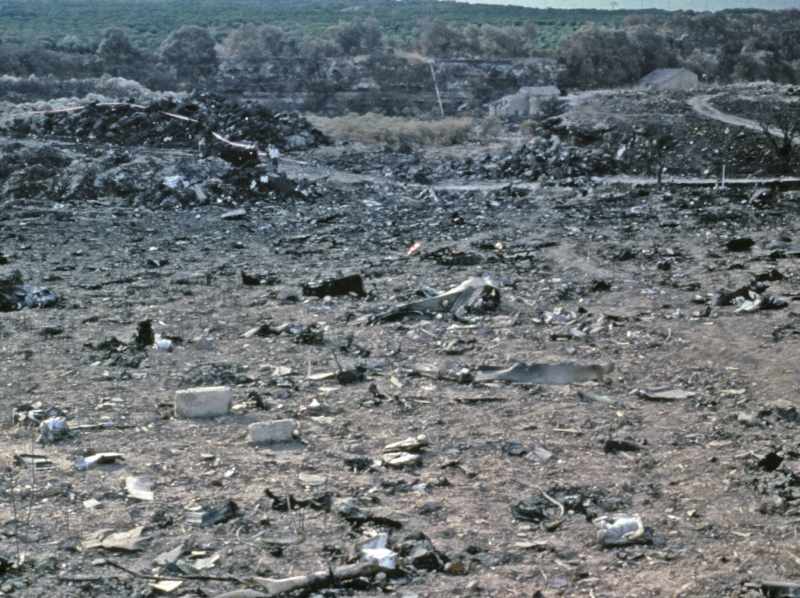 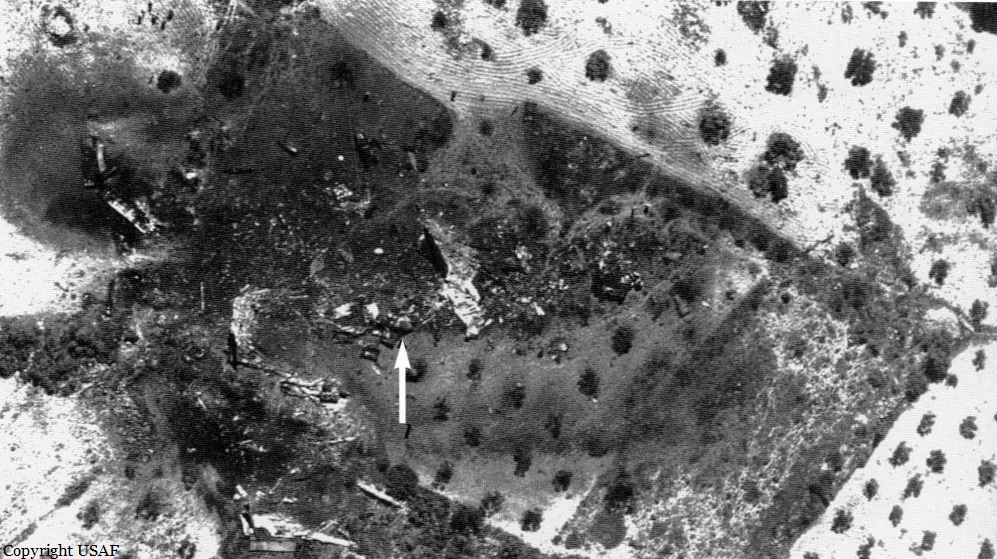 Crash of a Boeing KC-135Q Stratotanker in Centenera: 6 killed

Registration:
58-0039
Flight Phase:
Landing (descent or approach)
Flight Type:
Refuelling
Survivors:
No
Site:
Plain, Valley
Schedule:
Madrid - Madrid
MSN:
17784/254
YOM:
1959
Location:
Centenera
Castile-La Mancha
Country:
Spain
Region:
Europe
Crew on board:
6
Crew fatalities:
Pax on board:
0
Pax fatalities:
Other fatalities:
Total fatalities:
6
Aircraft flight hours:
5406
Circumstances:
The crew was returning to Madrid-Torrejón AFB following a refuelling mission over the Mediterranean Sea. While descending to Torrejón Airbase, the crew reported his altitude at 17,000 feet on descent when the airplane disappeared from radar screens. The main wreckage and all debris were found in Centenera, about 35 km northeast of the Torrejón Airbase. The aircraft was totally destroyed and all six crew members were killed.
Probable cause:
The exact cause of the accident could not be determined with certainty. However, it was reported that an in-flight explosion occurred in the n°1 fuel tank, maybe due to a chafing of boost pump wires in conduits.
Subscribe to Castile-La Mancha