Crash of an Epic LT in Egelsbach: 3 killed

Registration:
RA-2151G
Flight Phase:
Landing (descent or approach)
Flight Type:
Executive/Corporate/Business
Survivors:
No
Site:
Airport (less than 10 km from airport)
Schedule:
Cannes - Egelsbach
MSN:
019
YOM:
2008
Location:
Egelsbach
Hesse
Country:
Germany
Region:
Europe
Crew on board:
1
Crew fatalities:
Pax on board:
2
Pax fatalities:
Other fatalities:
Total fatalities:
3
Captain / Total flying hours:
11425
Captain / Total hours on type:
676.00
Aircraft flight hours:
2221
Circumstances:
At 1357 hrs the airplane had taken off from Cannes-Mandelieu Airport, France, to a private flight to Egelsbach Airfield, Germany. On board were the pilot and two passengers. According to the flight plan cruise flight was planned for Flight Level (FL)260. At 1519:03 hrs the pilot established contact with Frankfurt Radar, and informed the controller that the airplane was in descent to FL60 towards reporting point UBENO. The radar recordings show that the airplane was flying towards 335° and transmitted the transponder code 4065. The radar controller issued the descent clearance to 4,000 ft AMSL and conveyed a QNH of 1,020 hPa. At 1519:25 hrs the controller addressed the pilot: “[…] proceed direct DELTA, runway zero eight in use.” The pilot acknowledged the clearance. At 1520:20 hrs the controller instructed the pilot to descend to 3,500 ft AMSL. After the pilot had acknowledged the controller’s question, the change of flight rules from IFR to VFR was conducted at 1521 hrs about 16 NM south of Egelsbach Airfield. At the time, the airplane was at about 5,000 ft AMSL with a ground speed of approximately 240 kt. At 1522:34 hrs, the airplane was at 3,500 ft AMSL and about 14 NM from the airfield, the pilot established radio contact with Egelsbach Information with the words: “[…] inbound DELTA, descending VFR.” The Flugleiter (A person required by German regulation at uncontrolled aerodromes to provide aerodrome information service to pilots) answered: “Hello […] runway zero eight, QNH one zero two zero, squawk four four four one.” The pilot acknowledged the landing direction and the QNH. The communicated transponder code was not acknowledged, and did not change during the remainder of the flight, according to the radar recording. At 1524:34 hrs the Flugleiter gave the pilot the hint: “[…] the maximum altitude in this area is one thousand five hundred feet.” The pilot answered: “Roger, continue descent […].” At this time, altitude was still about 2,000 ft AMSL. According to the radar recording, at 1524:45 hrs the airplane turned right in northern direction toward the DELTA approach path to runway 08 of Egelsbach Airfield. Altitude was about 1,900 ft AMSL, and ground speed 170 kt. At 1526:30 hrs, at about the Tank- und Rastanlage Gräfenhausen (resting facility) at the Bundesautobahn A5 (motorway), it began to turn right up to north-eastern direction. At 1526:44 hrs the Flugleiter addressed the pilot: “[…] do you have the field in sight?” The pilot responded: “Ah, not yet […].” At the time, the airplane was about 1,000 m south-west of threshold 08 at the western outskirts of Erzhausen flying a northeastern heading. The Flugleiter added: “I suggest to reduce, you are now in right base.” After the pilot had answered with “Roger”, the Flugleiter added: “You are number one to land. The wind is zero four zero, one zero knots.” At 1527:04 hrs, the airplane was about 300 m south of threshold 08 flying a northeastern heading, the radio message“[…] approach” of the pilot was recorded. From then on the airplane began to turn left. At 1527:11 hrs, the airplane crossed runway 08 with a ground speed of about 100 kt at very low altitude with northern heading. At 1527:24 hrs the pilot said: “[…] may I the […] make an orbit?” The Flugleiter answered: “Yes, do it to your left-hand side and do not overfly the highway westbound.” At 1527:31 hrs, the last radar target was recorded at approximately 600 m north-west of threshold 08 indicating an altitude of about 425 ft AMSL. About 100 m south-west of it the airplane crashed to the ground and caught fire. All three occupants suffered fatal injuries. At the time of the accident, three persons were in the Tower of the airfield. The Flugleiter, as tower controller, his replacement, and the apron controller. They observed that the airplane flew directly towards the tower coming from the DELTA approach in descent with north-eastern heading, i.e. diagonal to the landing direction. In this phase the landing gear extended. Two witnesses, who were at the airport close to the tower, stated that they had seen the airplane during the left-hand turn. They estimated the bank angle during the turn with 30-45°. The two occupants of a Piper PA-28, which had been on approach to runway 08, stated that they had become aware of the other airplane, before changing from downwind leg to final approach. They also stated that during the turn the airplane went into a dive and impacted the ground after about a half turn. Approximately 330 m north-east of the accident site, persons had been walking in a forest. One of them recorded a video. This recording was made available for investigation purposes. The video shows the shadow of the airplane moving west immediately prior to the accident. Consistent engine sounds and, 8 seconds after the shadow passed, the crash of the airplane can be heard. The aircraft was totally destroyed by a post crash fire and all three occupants were killed, among them Natalia Fileva, co-owner of the Russian Operator S7 Airlines.
Probable cause:
The accident was caused by the pilot steering the airplane during a turn in low altitude in an uncontrolled flight attitude, the airplane then banked over the wing and impacted the ground in a spinning motion.
Contributing factors:
- The decision of the pilot to conduct a non-standard approach to runway 08 without visual contact with the runway and contrary to the SOP and to continue the unstabilized approach,
- The complex airspace structure surrounding Frankfurt-Egelsbach Airfield,
- The late recognition of the airport and the pilot’s decision for an inappropriate manoeuvre close to the ground,
- The insufficient attention distribution of the pilot in combination with the missing stall warning of the airplane.
Final Report: 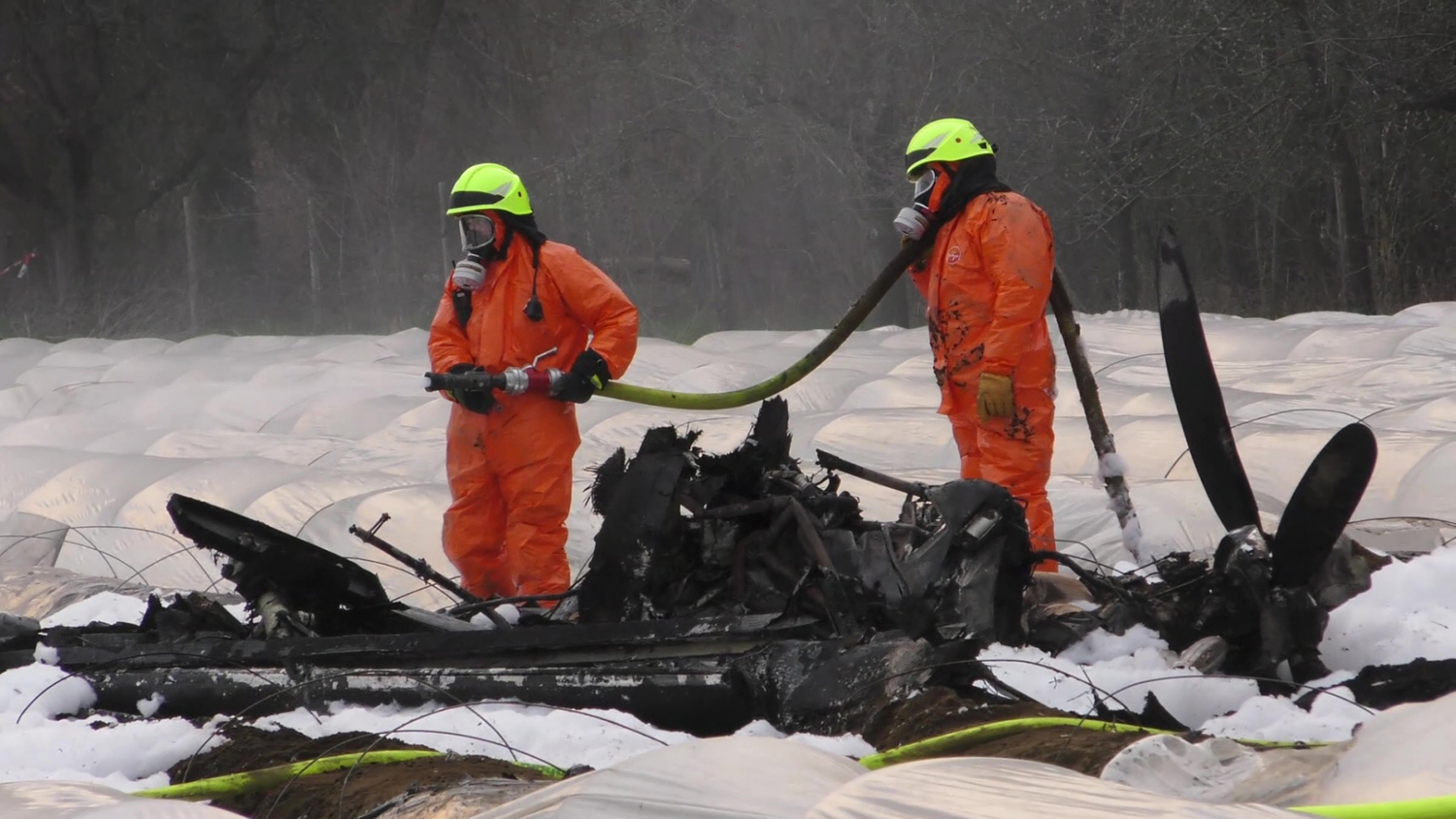 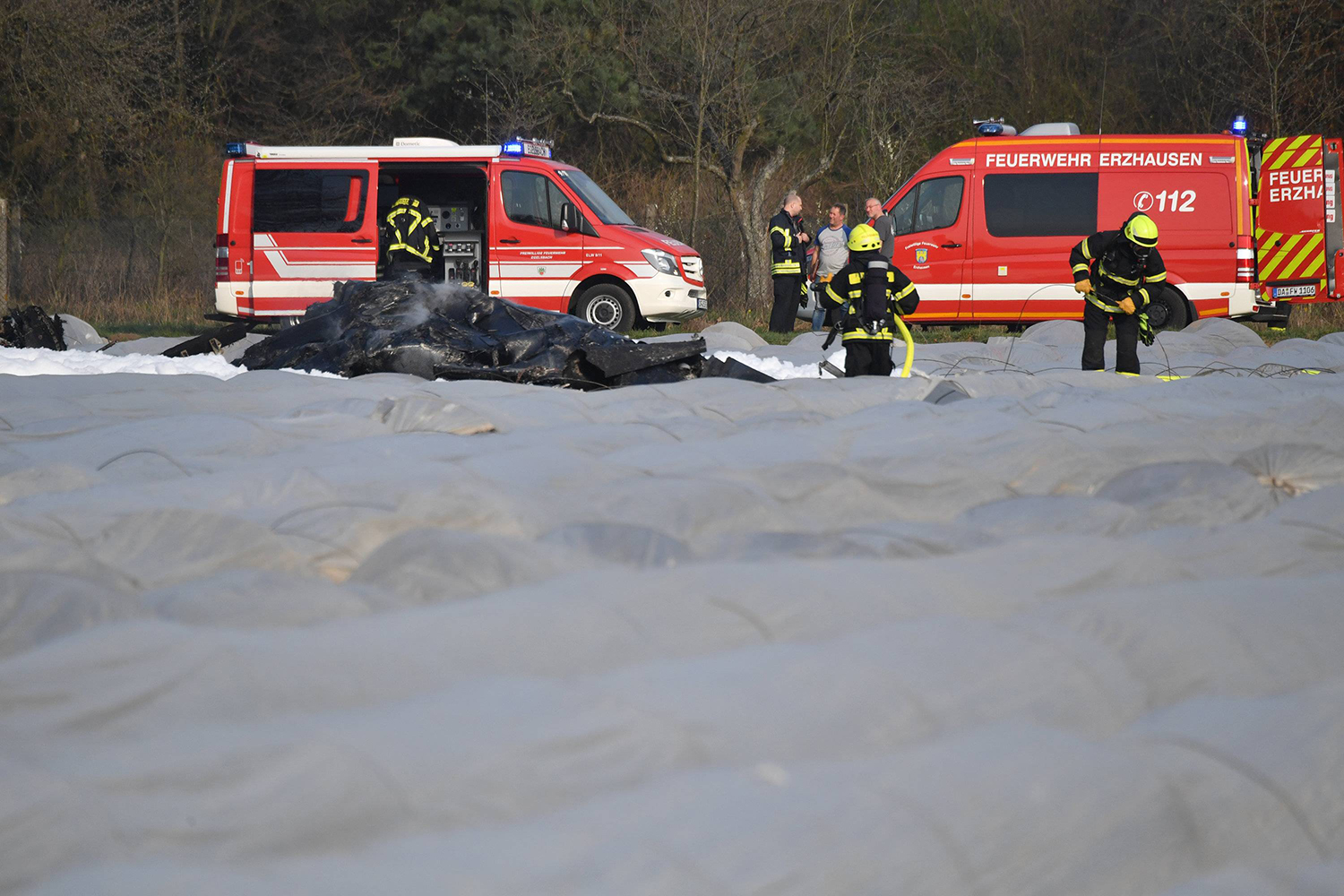 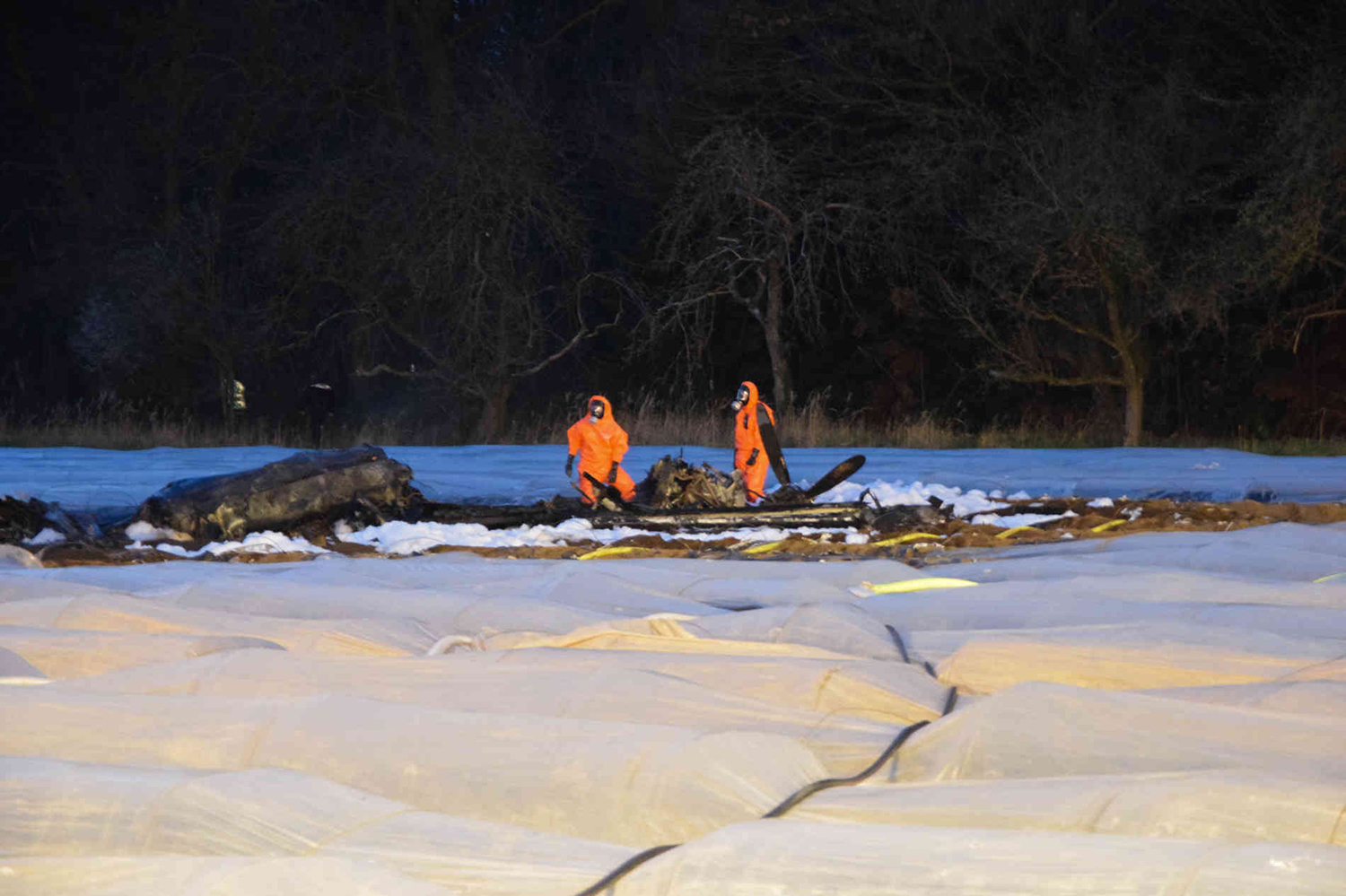 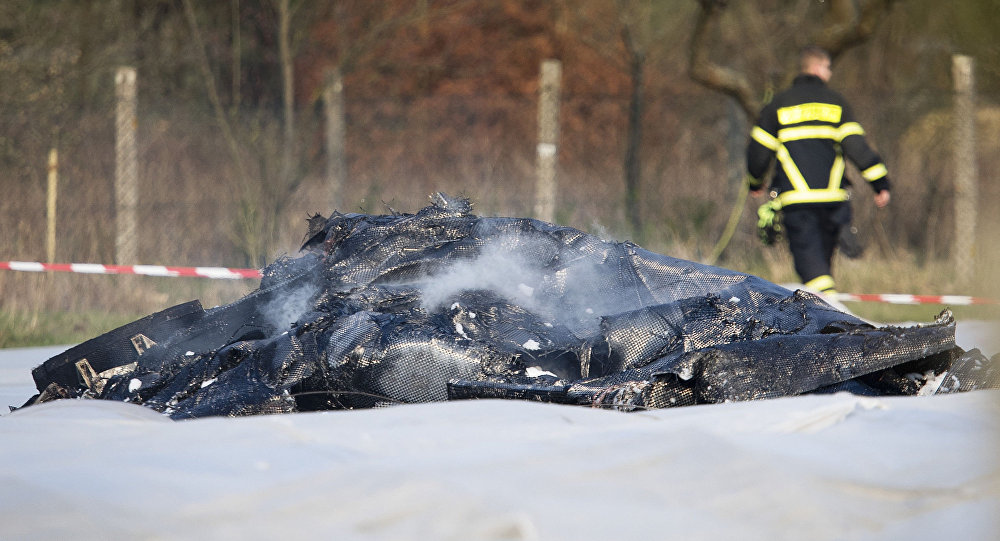 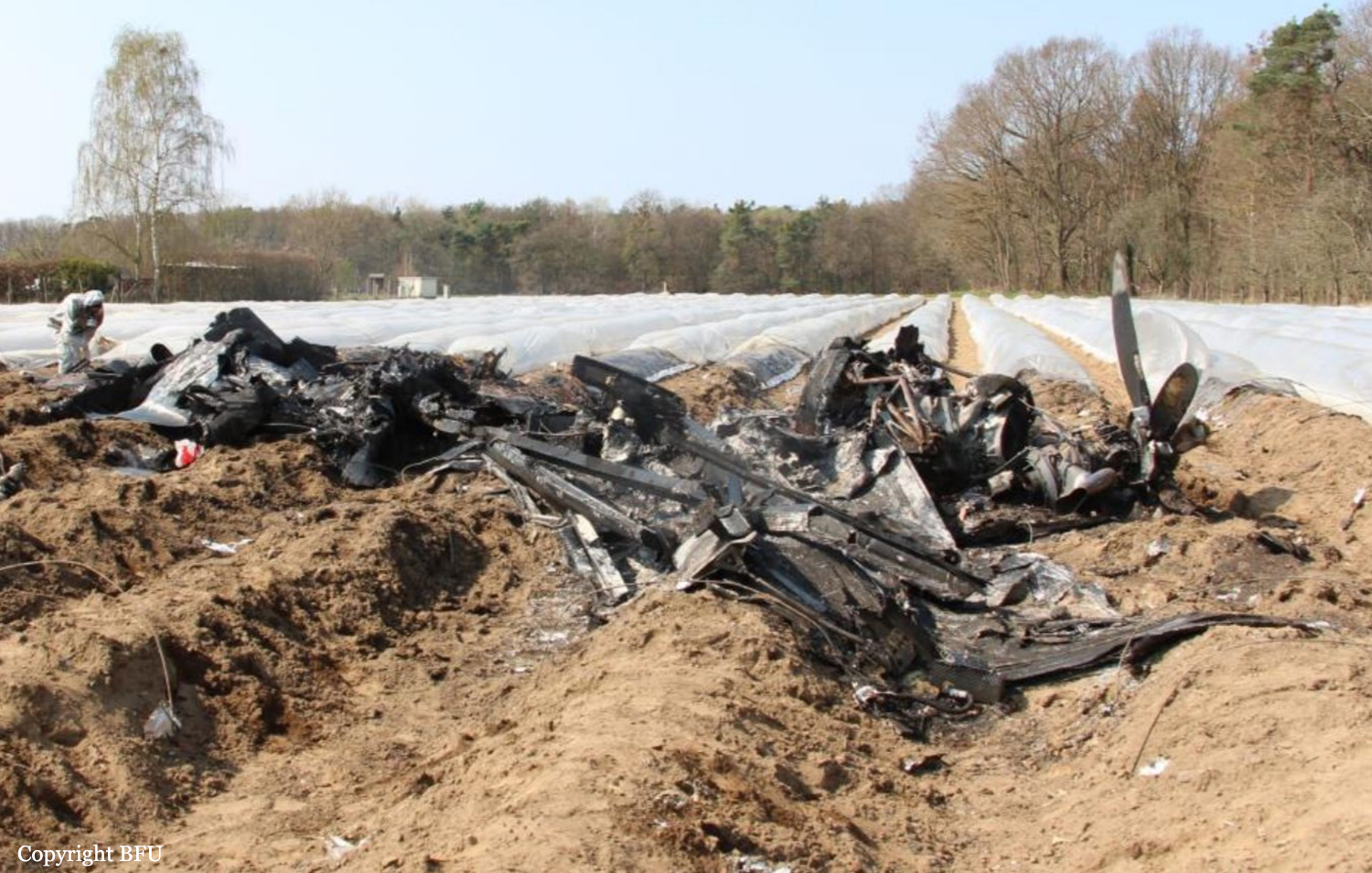 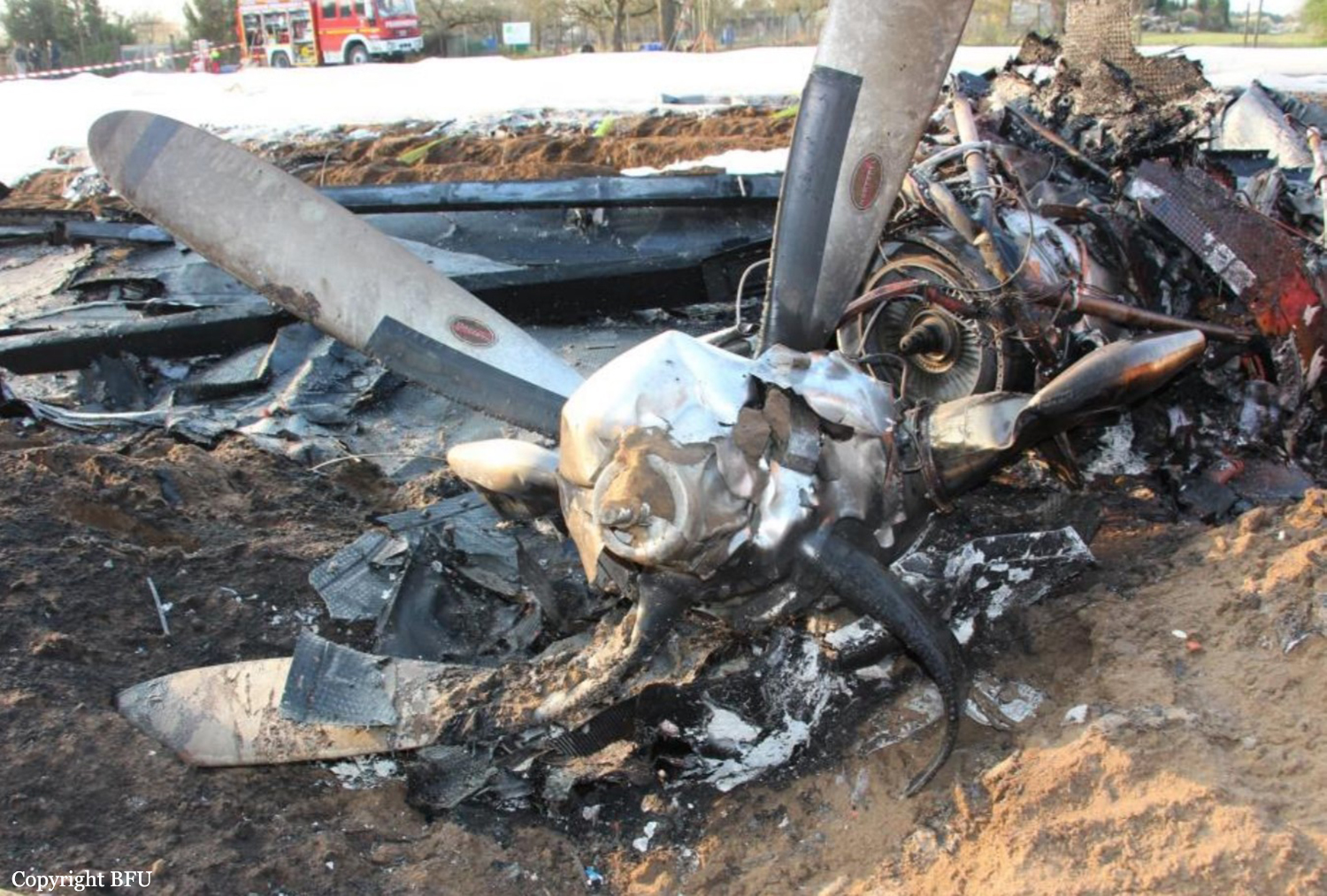 Crash of an Epic LT in Port Orange: 2 killed

Type of aircraft:
Epic LT
Operator:
Independent Technologies
Registration:
N669WR
Flight Phase:
Landing (descent or approach)
Flight Type:
Private
Survivors:
No
Site:
City
Schedule:
Millington – Port Orange
MSN:
029
YOM:
2009
Location:
Port Orange-Spruce Creek
Florida
Country:
United States of America
Region:
North America
Crew on board:
1
Crew fatalities:
Pax on board:
1
Pax fatalities:
Other fatalities:
Total fatalities:
2
Captain / Total flying hours:
4246
Captain / Total hours on type:
956.00
Aircraft flight hours:
822
Circumstances:
The private pilot obtained a full weather briefing before departing on a long cross-country flight. The destination airport was forecast to be under visual meteorological conditions, but there was an AIRMET and Center Weather Advisory (CWA) issued for low instrument flight rules (IFR) conditions later that day. The briefer told the pilot to check the weather again en route to see if the AIRMET and CWA had been updated. At the time the pilot stopped for fuel, another CWA was issued for low IFR conditions at his destination airport; however, there were no records to indicate that the pilot obtained this information during the fuel stop or after departing on the last leg of the flight. A review of air traffic control communications revealed that, about 10 minutes before arriving at the airport, the pilot reported that he had obtained the current weather conditions at his destination airport. The most recent observation, about 1 hour before the accident indicated good visibility; however, the weather reporting equipment did not provide ceiling heights. It is unknown if the pilot obtained weather information from nearby airports, which were reporting low instrument meteorological conditions (visibility between 1/4 and 1/2 mile and ceilings 200-300 ft above ground level [agl]). Additionally, three pilot reports (PIREPs) describing the poor weather conditions were filed within the hour before the accident. The controller did not relay the PIREPs or the CWA information to the pilot, so the pilot was likely unaware of the deteriorating conditions. Based on radar information and statements from witnesses, the pilot's approach to the airport was unstabilized. He descended below the minimum descent altitude of 440 ft, and, after breaking through the fog about 100 ft agl, the airplane reentered the fog and completed a 360° right turn near the approach end of the runway, during which its altitude varied from 100 ft to 300 ft. The airplane then climbed to an altitude about 800 ft before radar contact was lost near the accident site. The airplane came to rest inverted, consistent with one witness's statement that it descended through the clouds in a spin before impact; post accident examination revealed no preimpact anomalies with the airplane or engine that would have precluded normal operation. Although the pilot was instrument rated, his recent instrument experience could not be established. The circumstances of the accident, including the restricted visibility conditions and the pilot's maneuvering of the airplane before the impact, are consistent with a spatial disorientation event. It is likely that the pilot experienced a loss of control due to spatial disorientation, which resulted in an aerodynamic stall and spin.
Probable cause:
The pilot's loss of airplane control due to spatial disorientation, which resulted in the exceedance of the airplane's critical angle of attack and an aerodynamic stall/spin. Contributing to the accident was the pilot's failure to fly a stabilized approach consistent with the published instrument approach procedure.
Final Report: 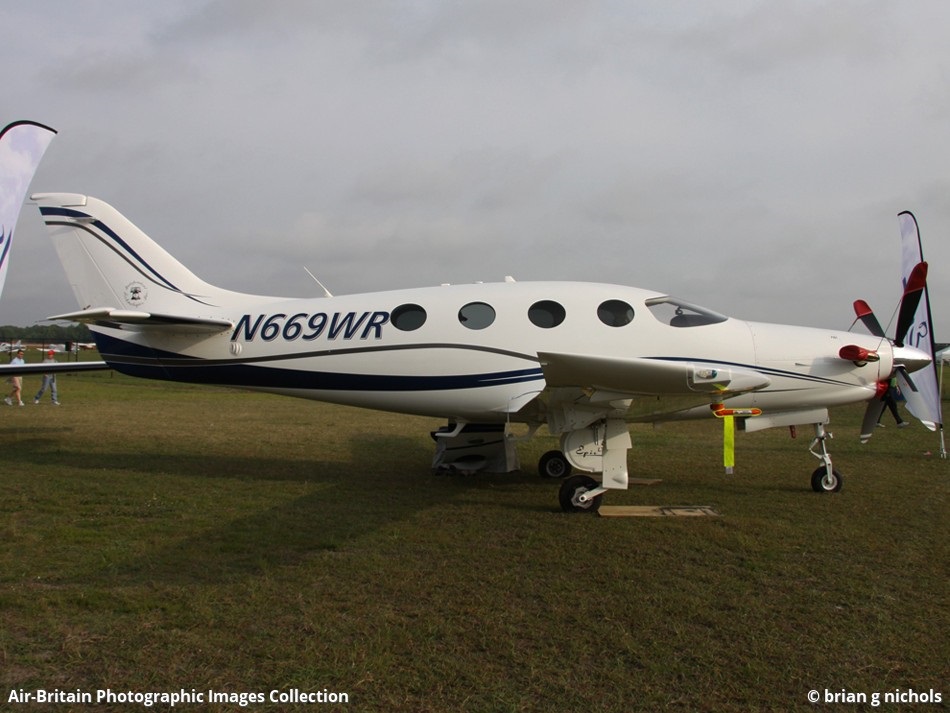 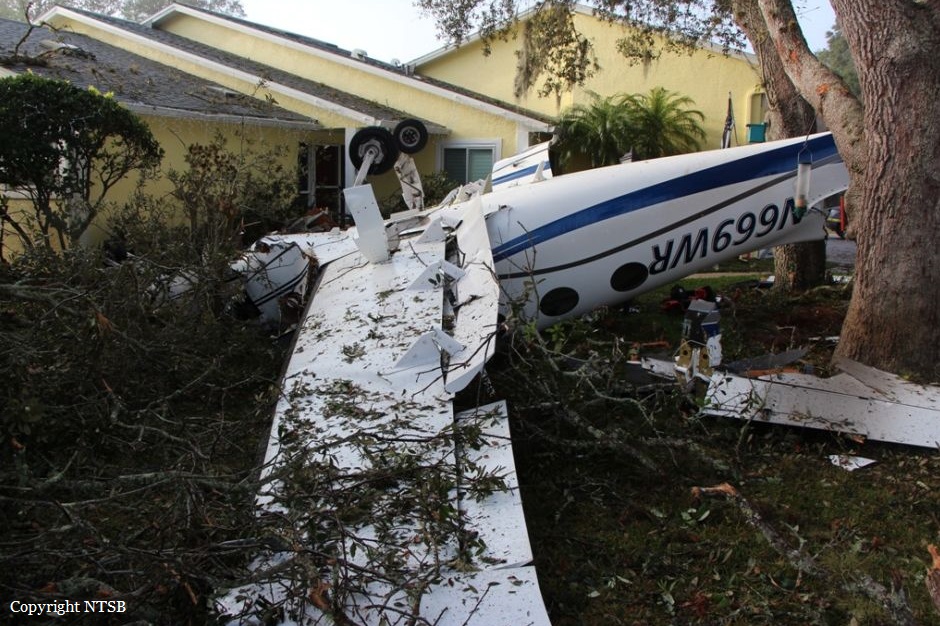 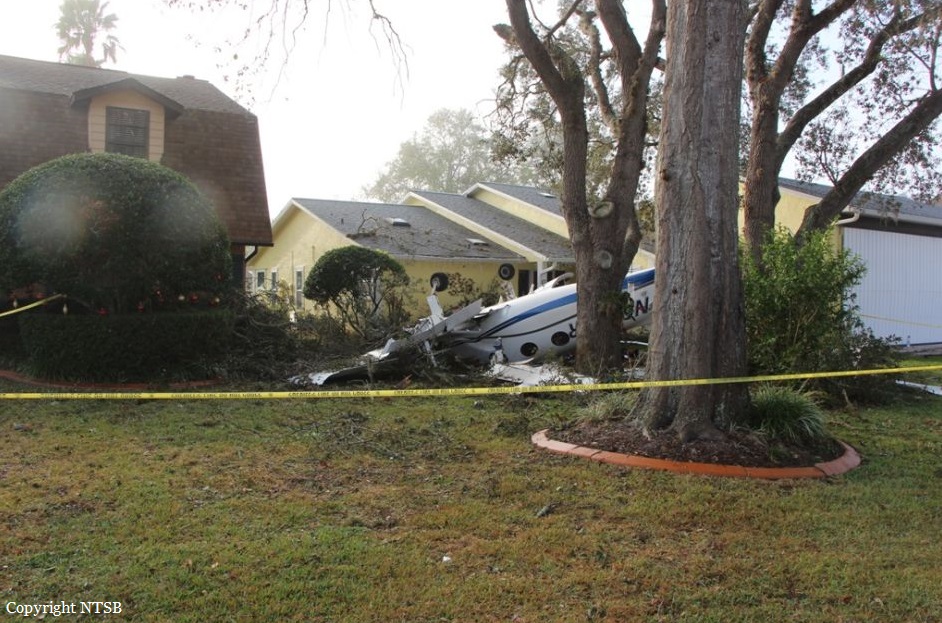 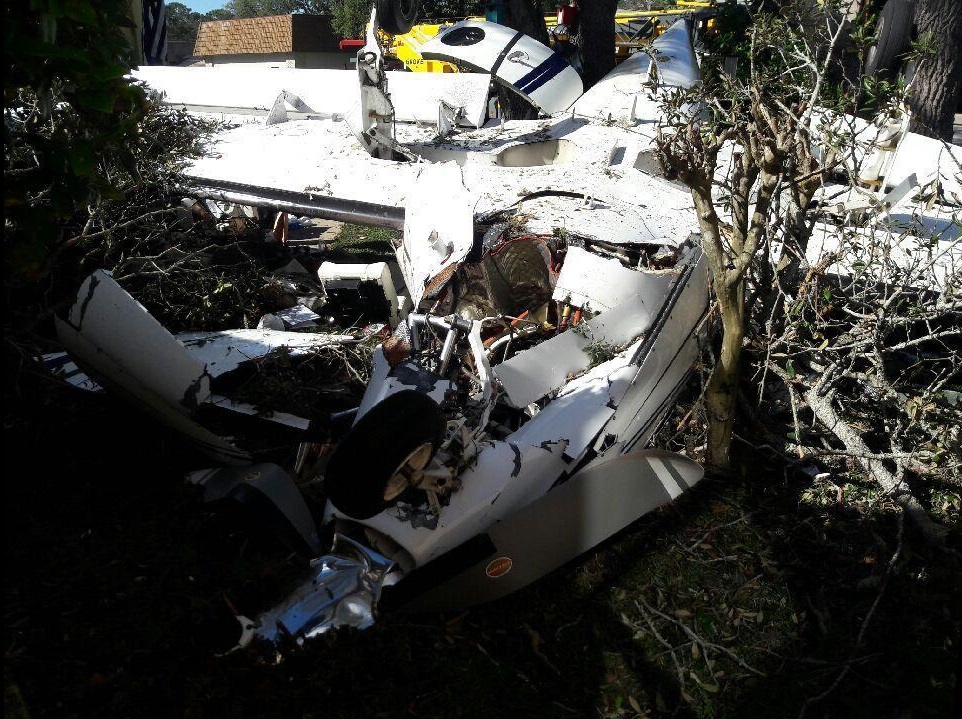 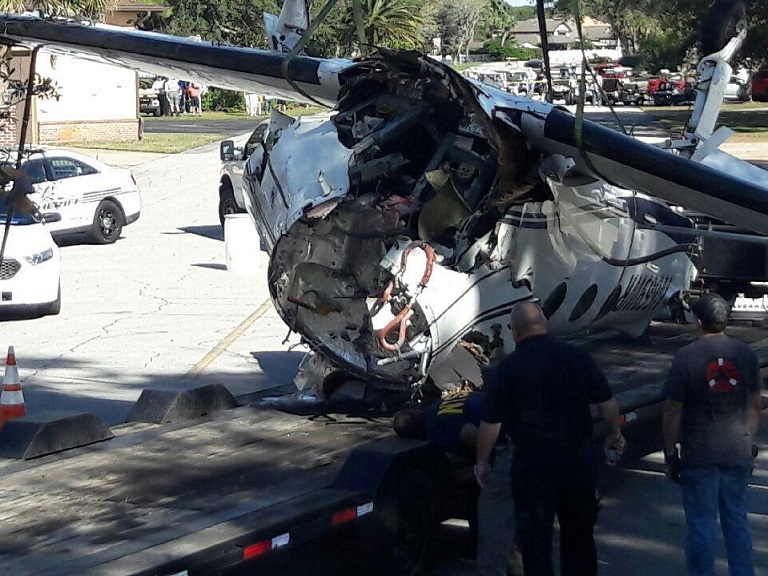 Crash of an Epic LT off Astoria

Type of aircraft:
Epic LT
Operator:
Ellumax Leasing
Registration:
N653SB
Flight Phase:
Takeoff (climb)
Flight Type:
Private
Survivors:
Yes
Site:
Lake, Sea, Ocean, River
Schedule:
Astoria – Seattle
MSN:
025
YOM:
2008
Location:
Astoria
Oregon
Country:
United States of America
Region:
North America
Crew on board:
1
Crew fatalities:
Pax on board:
1
Pax fatalities:
Other fatalities:
Total fatalities:
0
Captain / Total flying hours:
1550
Captain / Total hours on type:
75.00
Aircraft flight hours:
72
Circumstances:
The single engine aircraft departed Astoria Airport at 1637LT on a private flight to Seattle-Boeing Field, carrying one passenger (a female passenger aged 84) and one pilot. During a climb to en route cruise, the airplane's engine lost almost all power, and the pilot elected to ditch the airplane into the Columbia River off Astoria. The airplane crash landed eight minutes later, nosed down in water and came to rest partially submerged. Both occupants were quickly rescued and were uninjured. The aircraft was damaged beyond repair.
Probable cause:
The partial loss of engine power during climb to cruise due to the failure of the engine's fuel control unit. Contributing to the accident was the incorrect machining of an internal component of the fuel control unit, and the failure of the assembling technician to correctly inspect the unit's assembly.
Final Report: 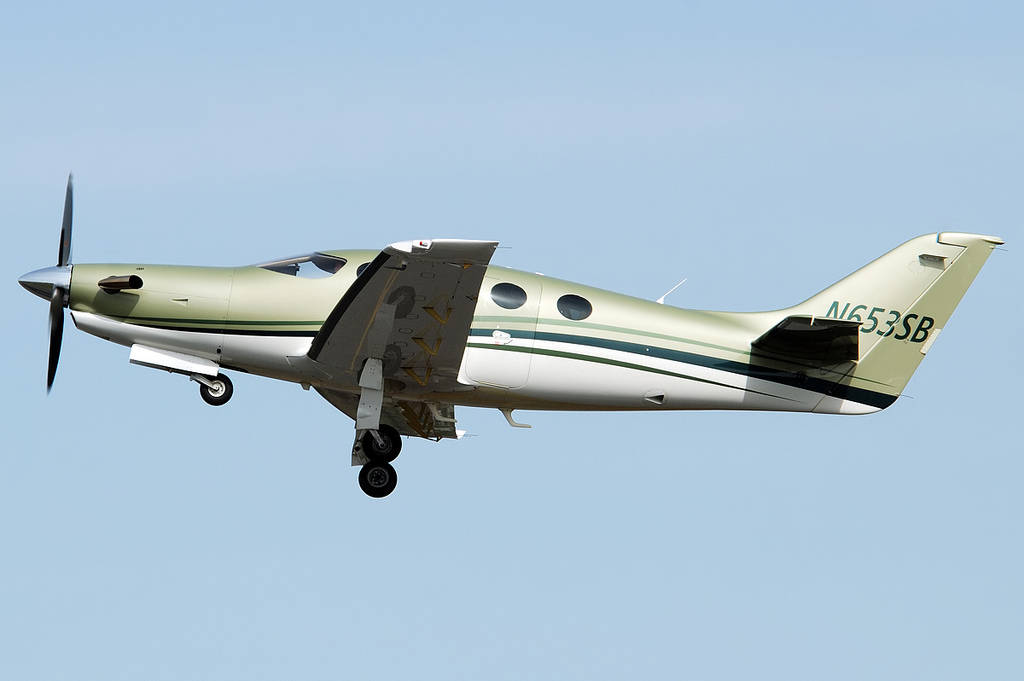 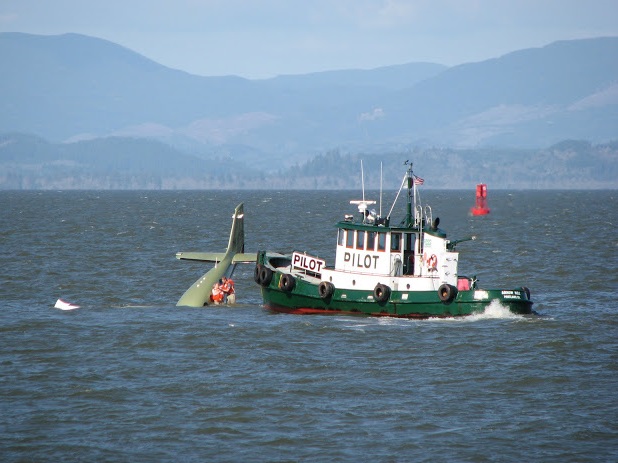 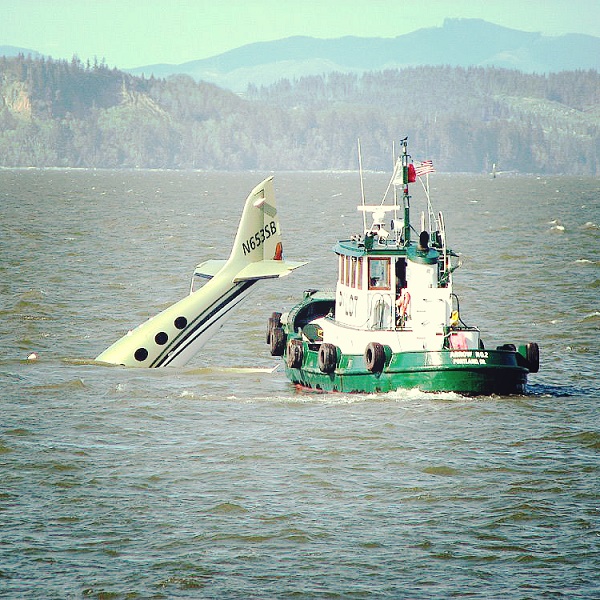