Crash of a Cessna 425 Conquest I in Helena 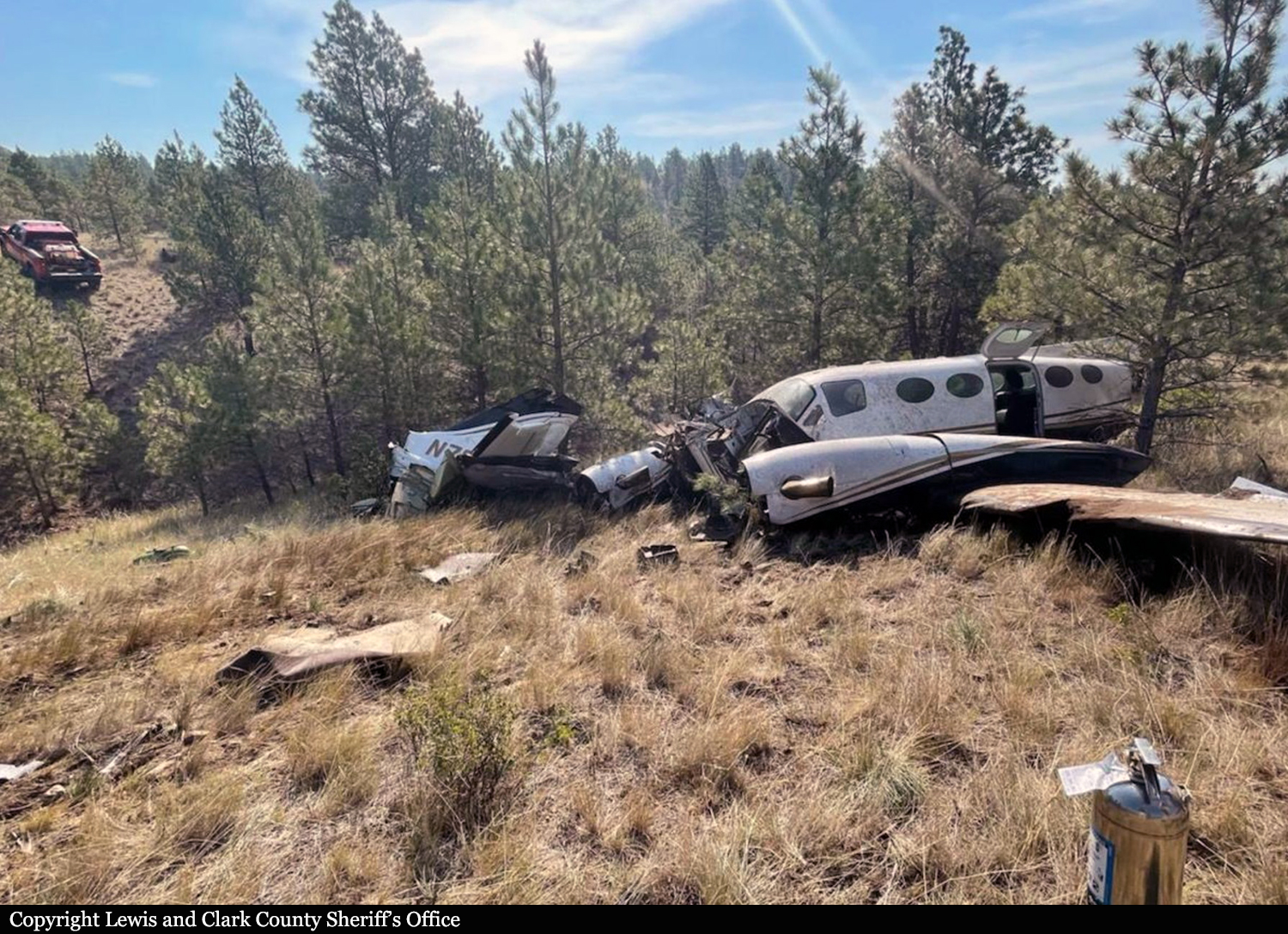 Crash of a Cessna 425 Conquest I in Butler: 1 killed

Type of aircraft:
Cessna 425 Conquest
Operator:
Santa Fe Investments
Registration:
N622MM
Flight Phase:
Landing (descent or approach)
Flight Type:
Private
Survivors:
No
Site:
Airport (less than 10 km from airport)
Schedule:
Vero Beach - Olathe
MSN:
425-0187
YOM:
1983
Location:
Butler
Missouri
Country:
United States of America
Region:
North America
Crew on board:
1
Crew fatalities:
Pax on board:
0
Pax fatalities:
Other fatalities:
Total fatalities:
1
Circumstances:
En route from Vero Beach to Olathe, while cruising at an altitude of 26,000 feet, the pilot contacted ATC and reported technical problems. He was cleared to reduce his altitude and elected to divert to Butler Airport. On final, the twin engine airplane struck a grain bin and crashed on the ground. The pilot, sole on board, was killed. 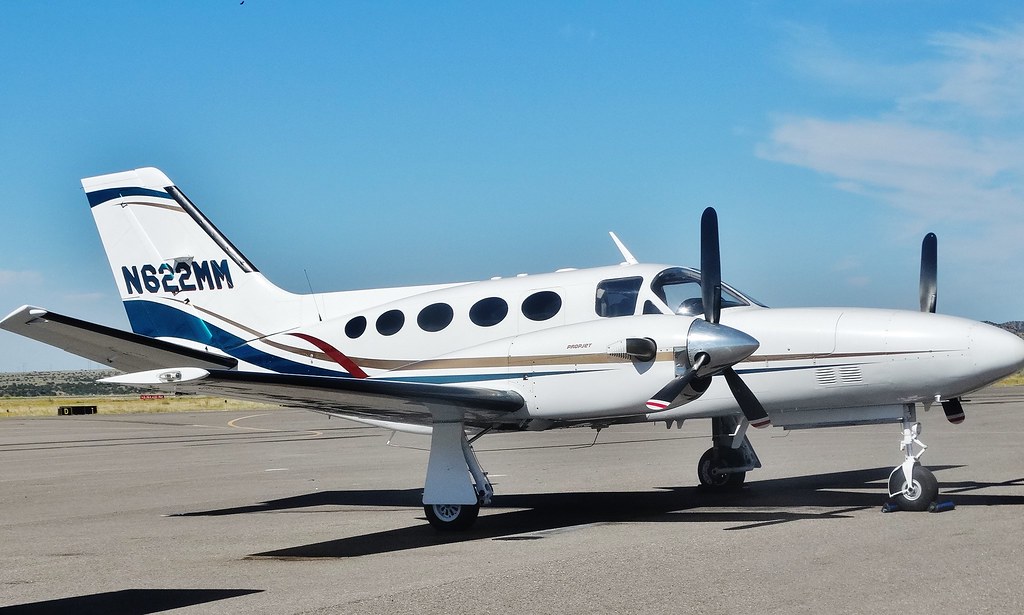 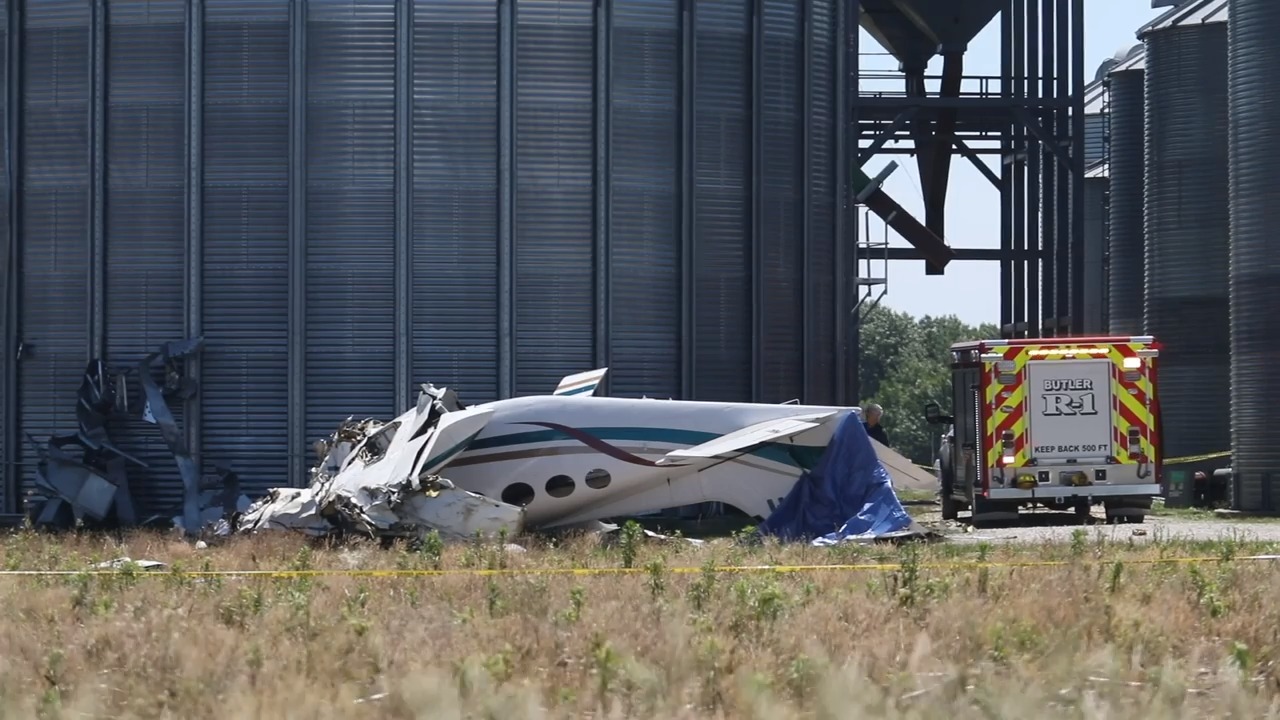 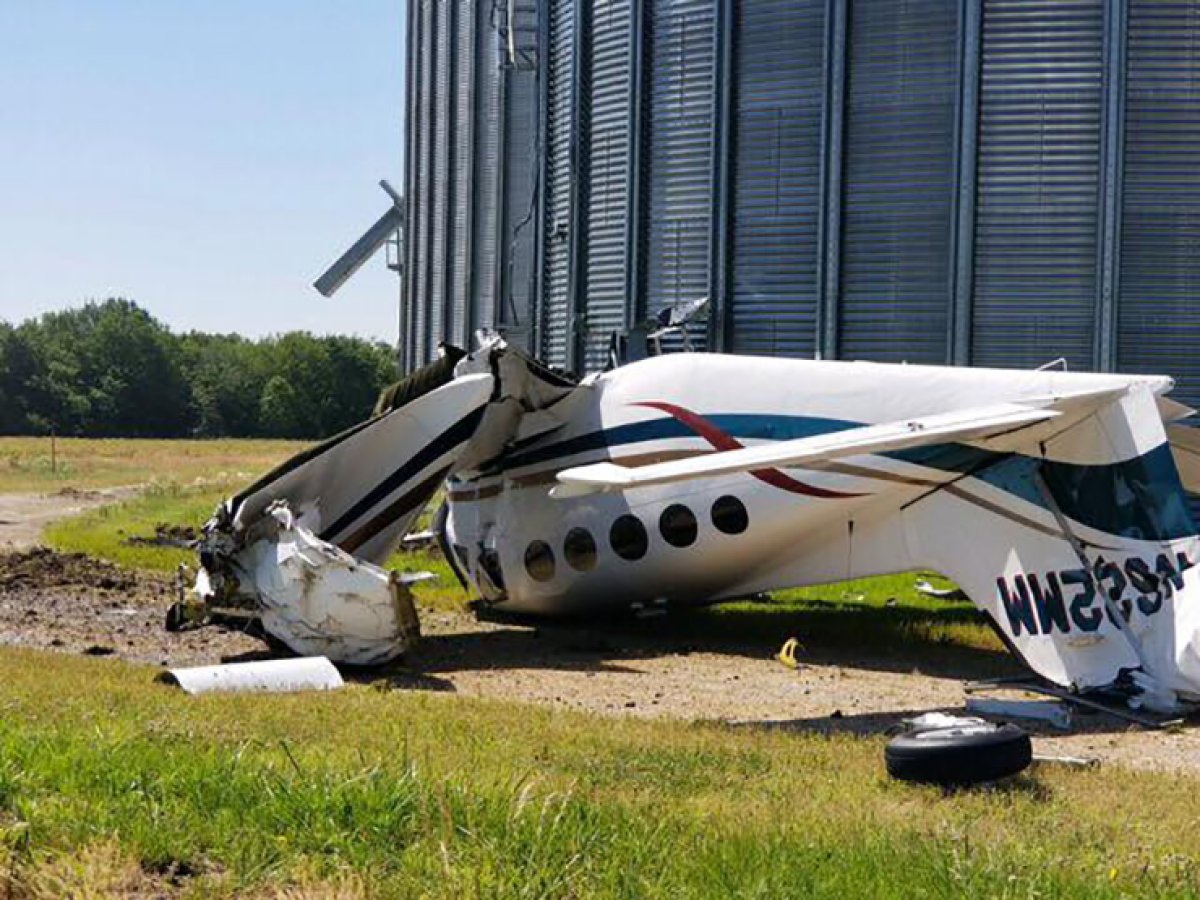 Crash of a Cessna 425 Conquest in Windhoek: 3 killed

Registration:
V5-MJW
Flight Phase:
Landing (descent or approach)
Flight Type:
Training
Survivors:
No
Site:
Airport (less than 10 km from airport)
Schedule:
Windhoek - Windhoek
MSN:
425-0077
YOM:
1981
Location:
Windhoek-Hosea Kutako
Khomas Region
Country:
Namibia
Region:
Africa
Crew on board:
3
Crew fatalities:
Pax on board:
0
Pax fatalities:
Other fatalities:
Total fatalities:
3
Captain / Total flying hours:
11686
Copilot / Total flying hours:
3765
Copilot / Total hours on type:
256
Aircraft flight hours:
10108
Circumstances:
On 29 January 2016, at 08:10 a Cessna 425 Conquest, which was privately operated, crashed approx. 300 meters NNE of threshold Runway 26. 1.1.2 According to the flight plan filled on the 28th January 2016, the flight was scheduled for a renewal of CPL and IR ratings for the two pilots by a Designated Examiner (DE). Departure time was scheduled at 07:45 at a cruising altitude of FL100 for Hosea Kutako Airport. The pilots requested a procedure for an Instrument Landing System (ILS) approach. The Air Traffic Controller (ATC) cleared them for the procedure for runway 26 ILS approach with QNH 1024. They were also asked to report when at nine miles-inbound. At around nine miles they reported their location and were instructed to continue the approach along the glide slope. The DE requested a VOR approach for their next approach and an early right hand turnout that was approved by ATC who also required them to report when going around. The ATC stated that he saw them at around 4nm on final approach. He then stated that he looked away for a moment after which he heard a slight bang, then saw a ball of flames at about 300 meters north of threshold runway 26. He called out to the aircraft three times whilst looking out for it when he finally concluded that it could have been V5-MJW that had crashed. The ATC pressed a crash alarm after a moment when it did not go off, the controller then called the fire station and alerted them of the occurrence. The Airport’s Fire and Rescue team after receiving the initial notification from the ATC took around 10 minutes to reach the site, by that time fire had engulfed the plane and its occupants. The team took 3-4 minutes to extinguish the fire. The weather was reported as fine with winds about 140° at 08 kts with scattered clouds at 4000ft and unrestricted visibility.
Probable cause:
The aircraft stalled at low altitude and consequently impacted the ground.
Contributory Factors:
- Loss of control of the aircraft,
- Non-adherence of go-around procedures as set on the AIP,
- Normalization of deviation -where non-standard go-around procedures are executed.
Final Report: 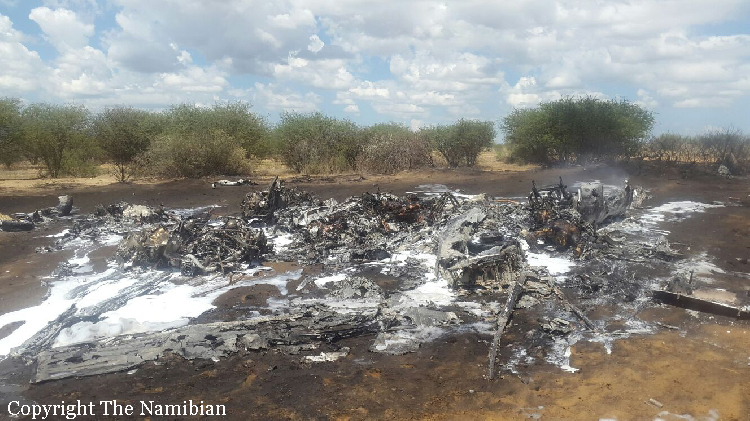 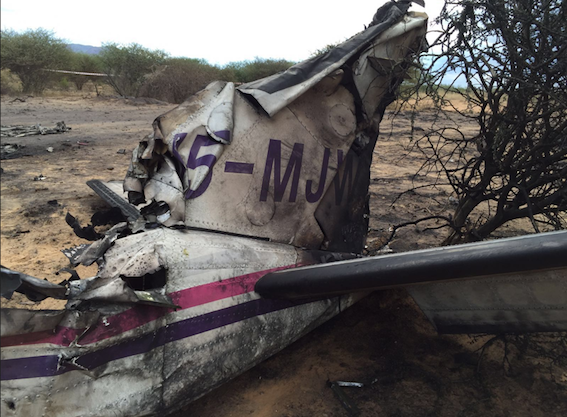 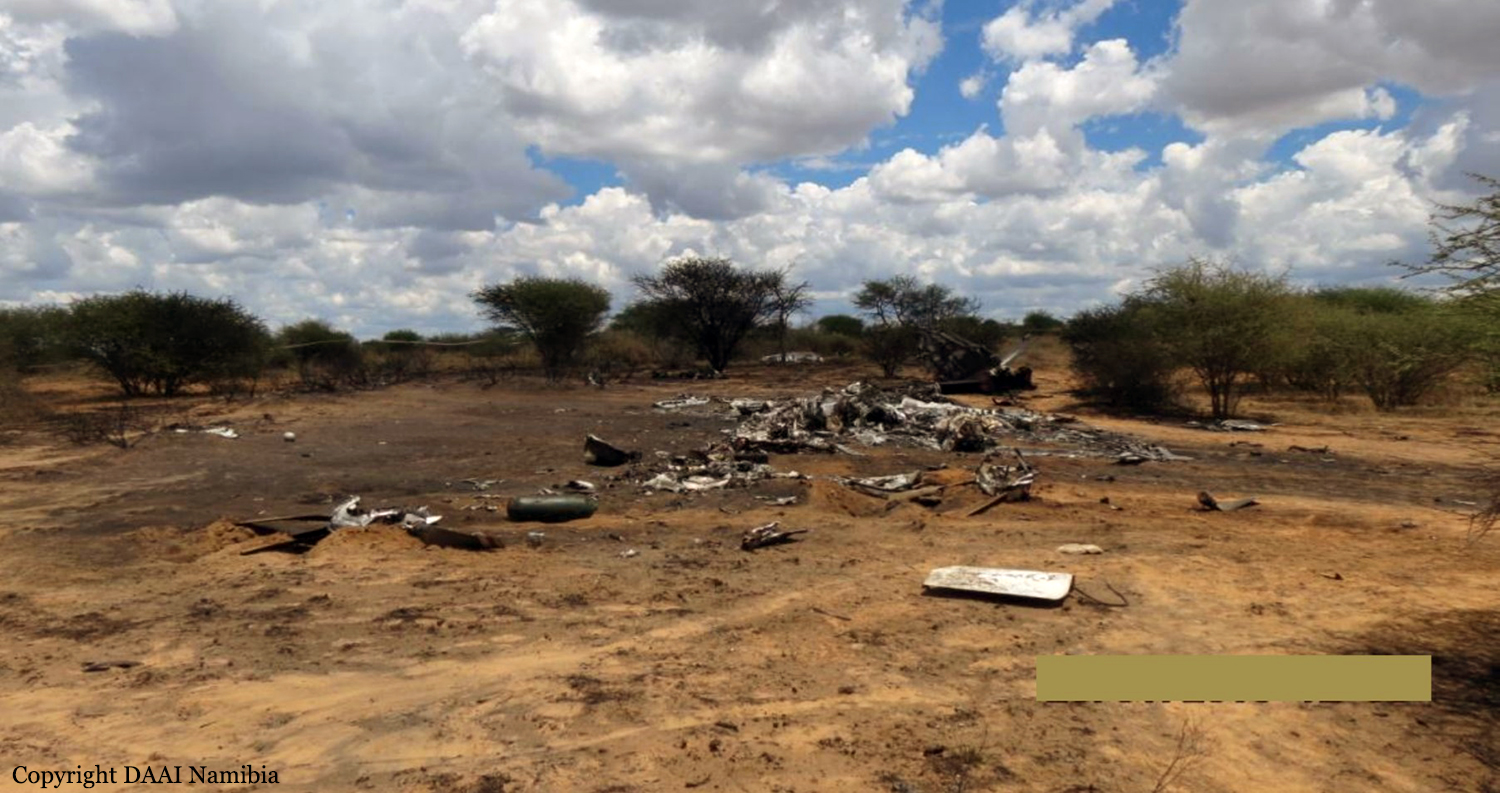 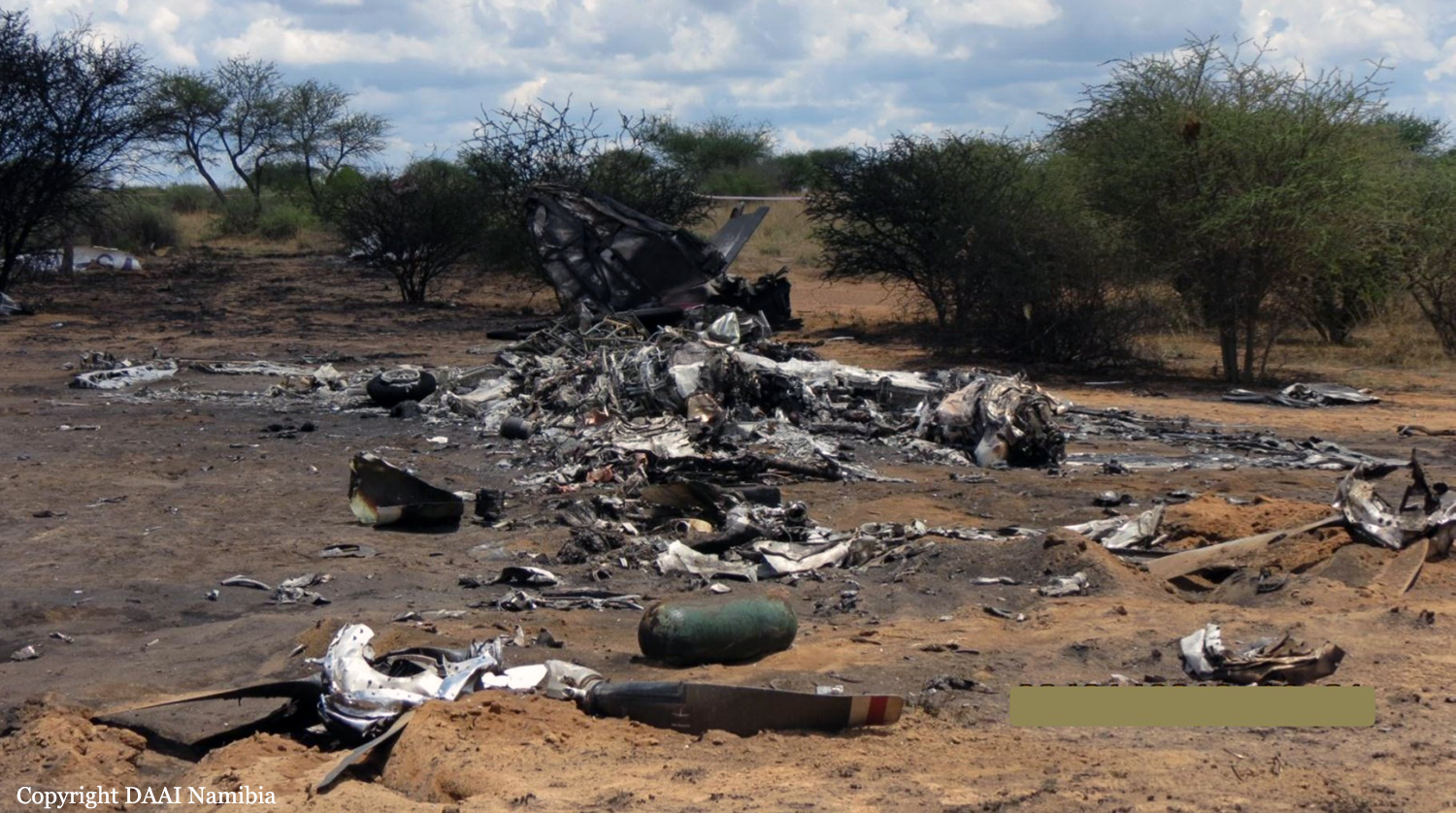 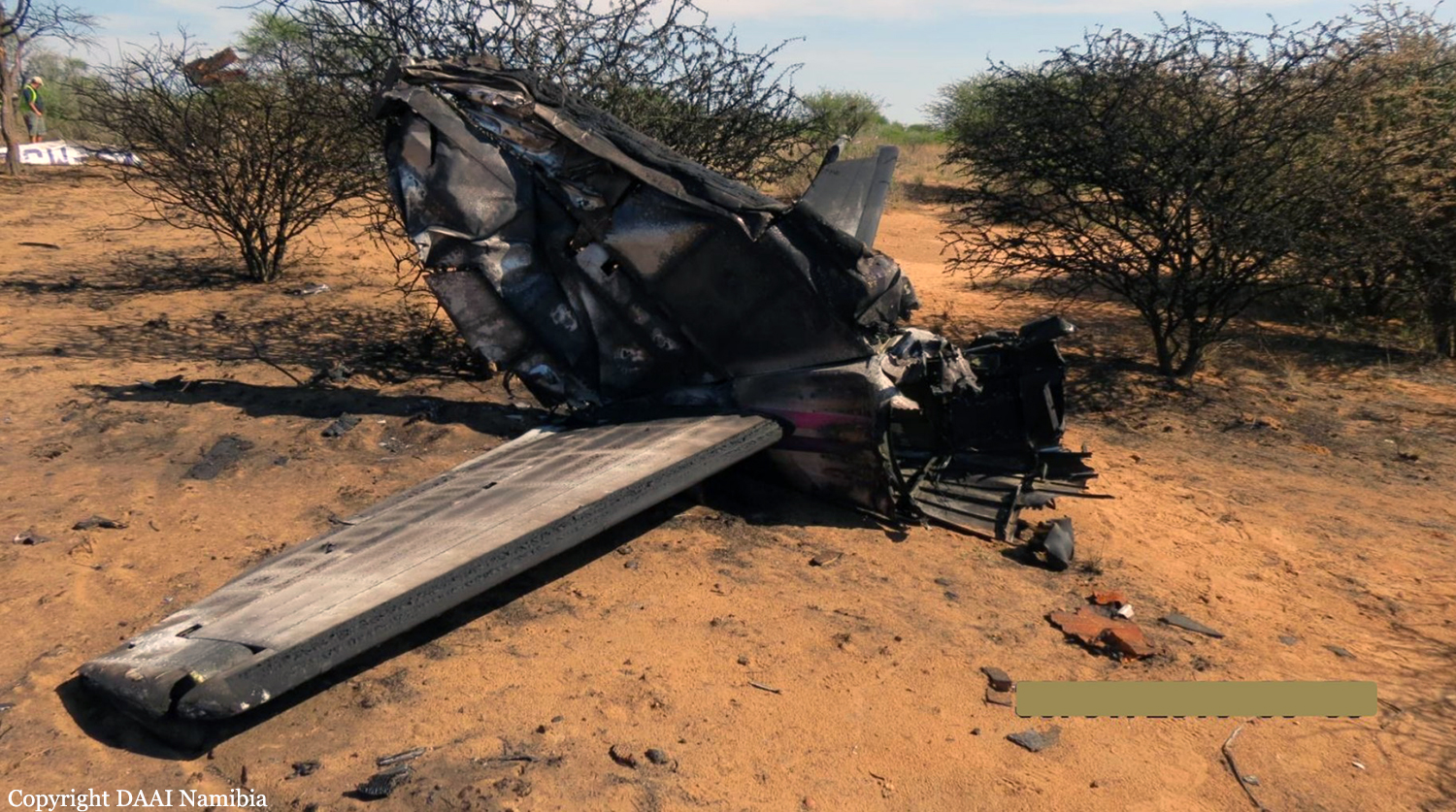 Crash of a Cessna 425 Conquest I in Canadian

Registration:
N410VE
Flight Phase:
Landing (descent or approach)
Flight Type:
Private
Survivors:
Yes
Site:
Airport (less than 10 km from airport)
Schedule:
Grand Junction - Canadian
MSN:
425-0097
YOM:
1981
Location:
Canadian
Texas
Country:
United States of America
Region:
North America
Crew on board:
1
Crew fatalities:
Pax on board:
6
Pax fatalities:
Other fatalities:
Total fatalities:
0
Captain / Total flying hours:
22500
Captain / Total hours on type:
1000.00
Aircraft flight hours:
7412
Circumstances:
While on a straight-in global-positioning-system approach, the airplane broke out of the clouds directly over the end of the runway. The pilot then remained clear of the clouds and executed a no-flap circling approach to the opposite direction runway. The pilot said that his airspeed was high when he touched down. The landing was hard, and the right main landing gear tire blew out, the airplane departed the runway to the left, and the left main landing gear collapsed. No preaccident mechanical malfunctions or failures were found that would have precluded normal operation.

Probable cause:
The pilot’s continuation of the approach with excessive airspeed, which resulted in a hard landing and a loss of directional control.
Final Report: 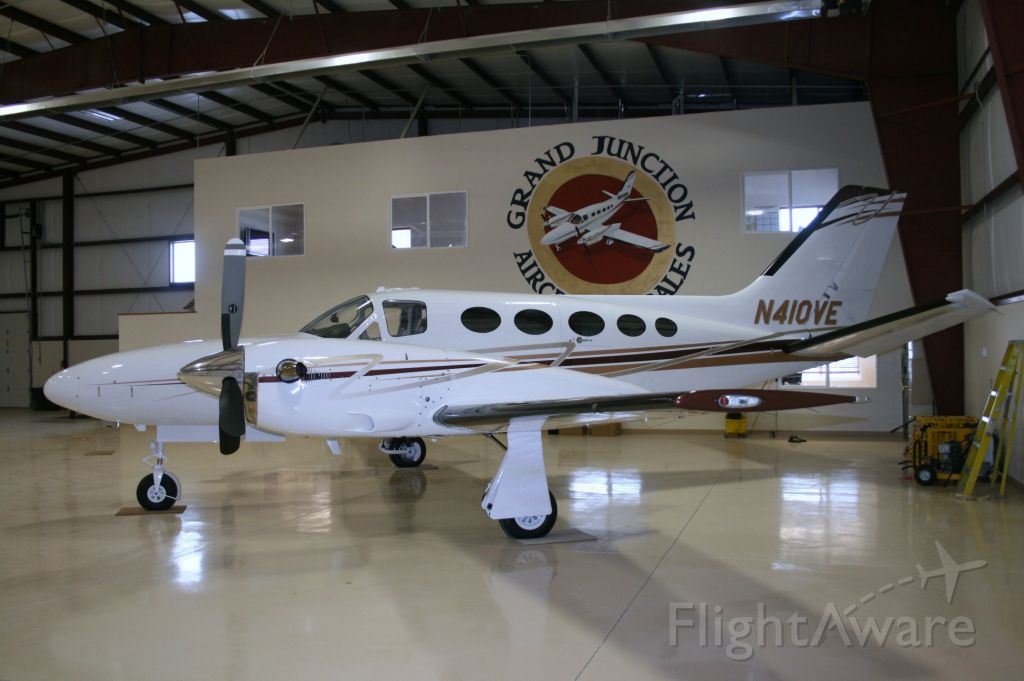 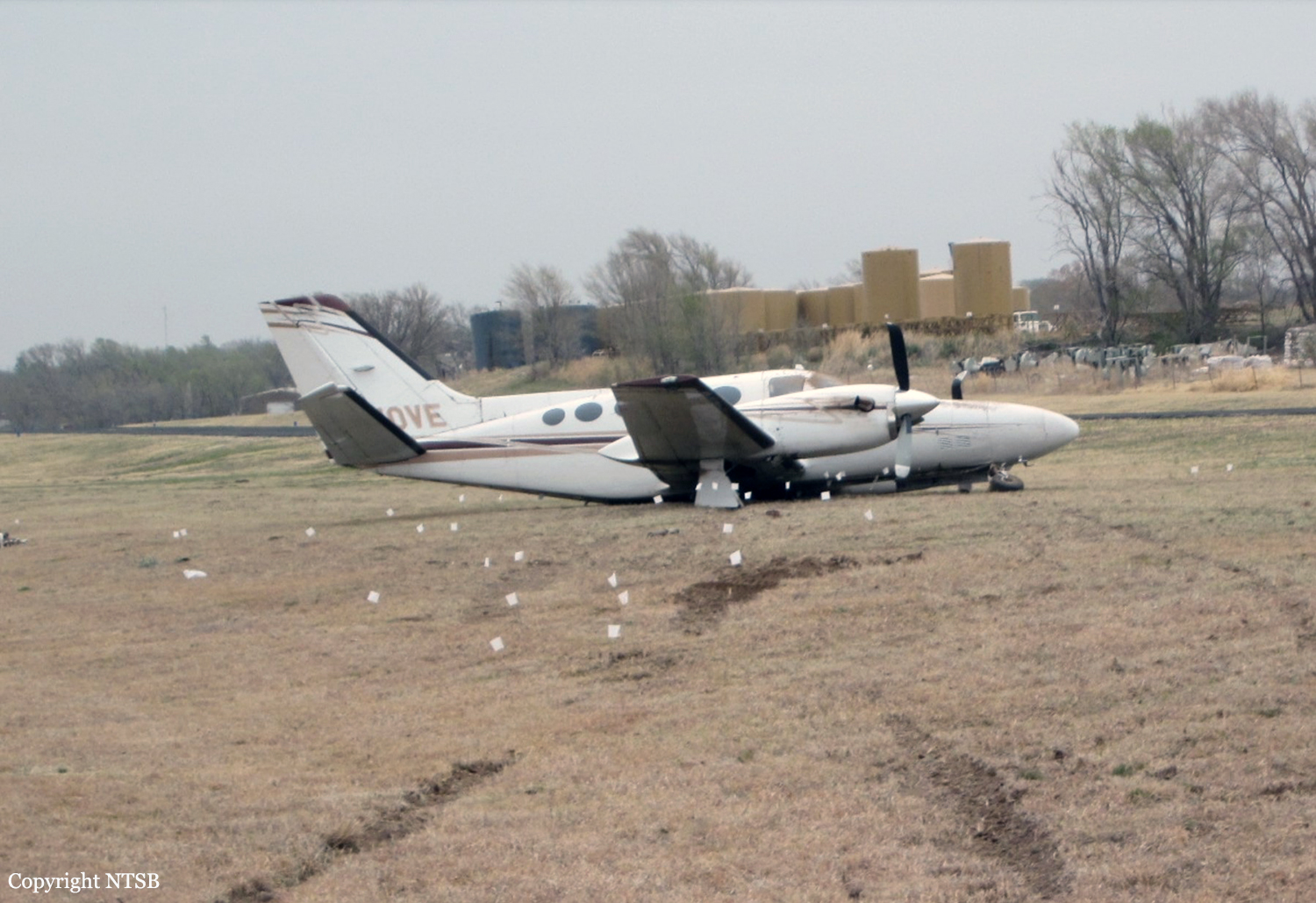 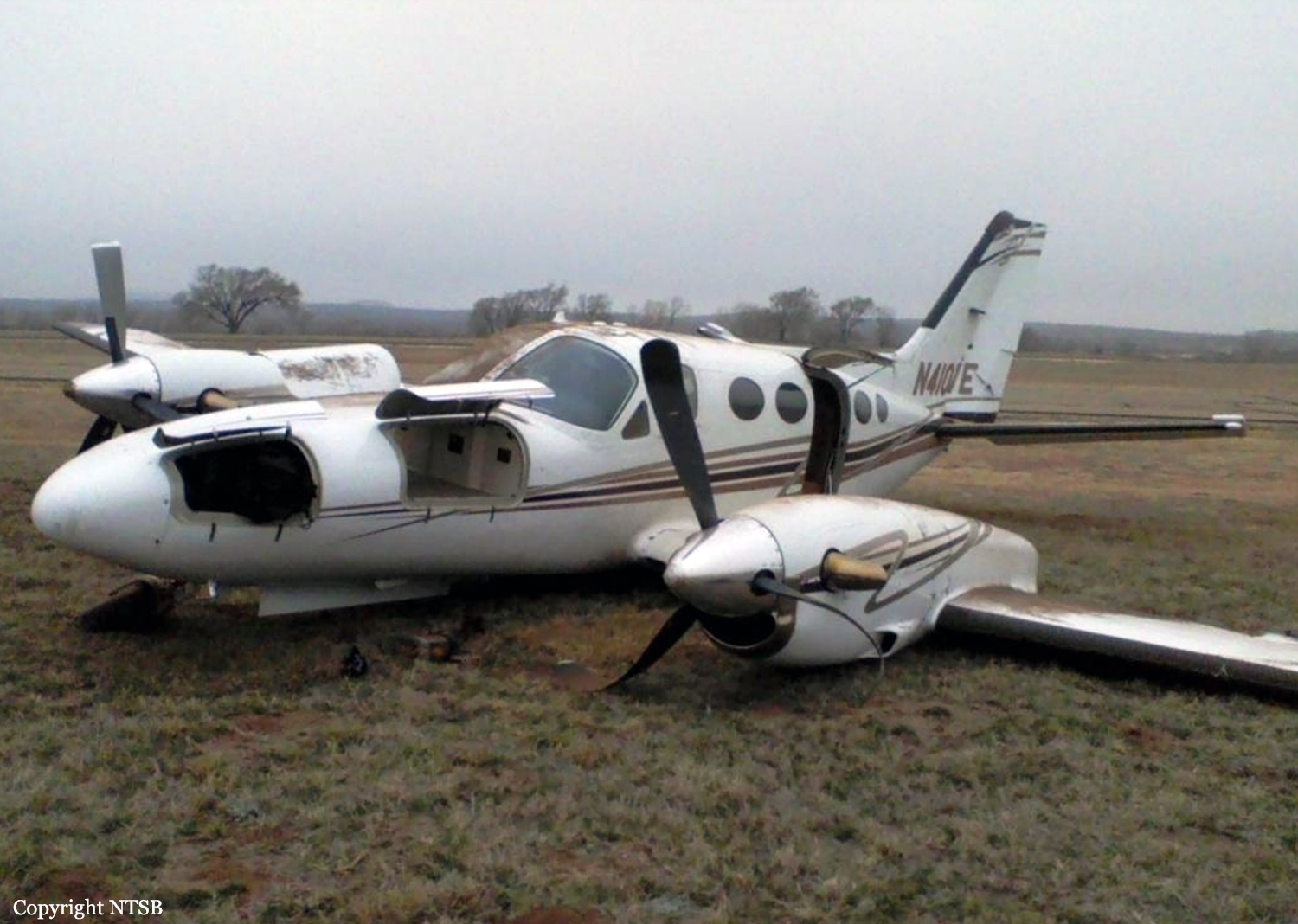 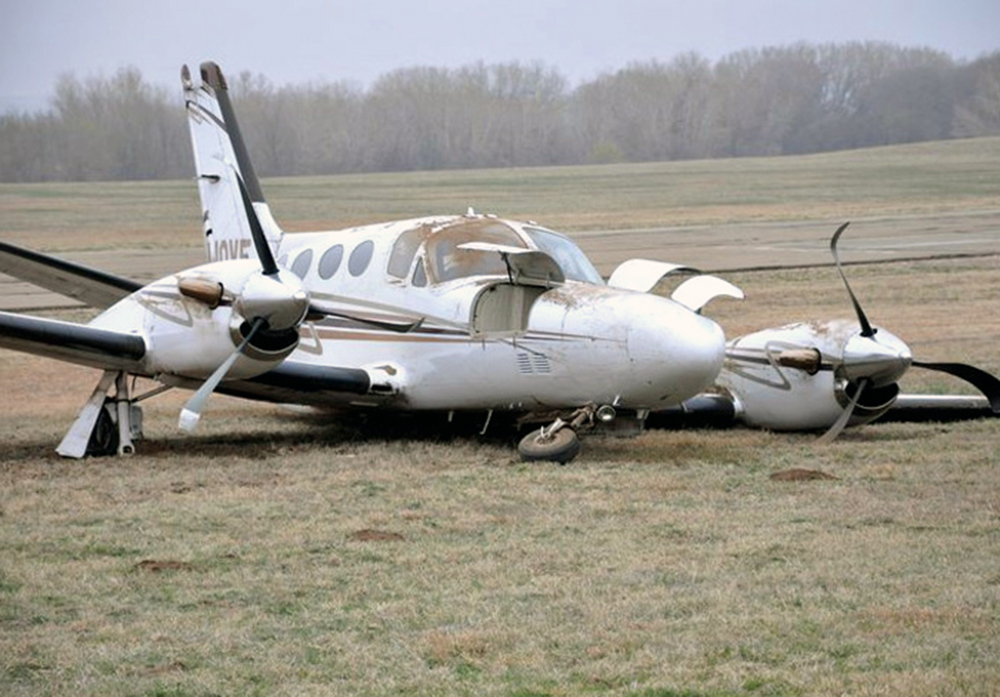 Crash of a Cessna 425 Conquest I in Munich 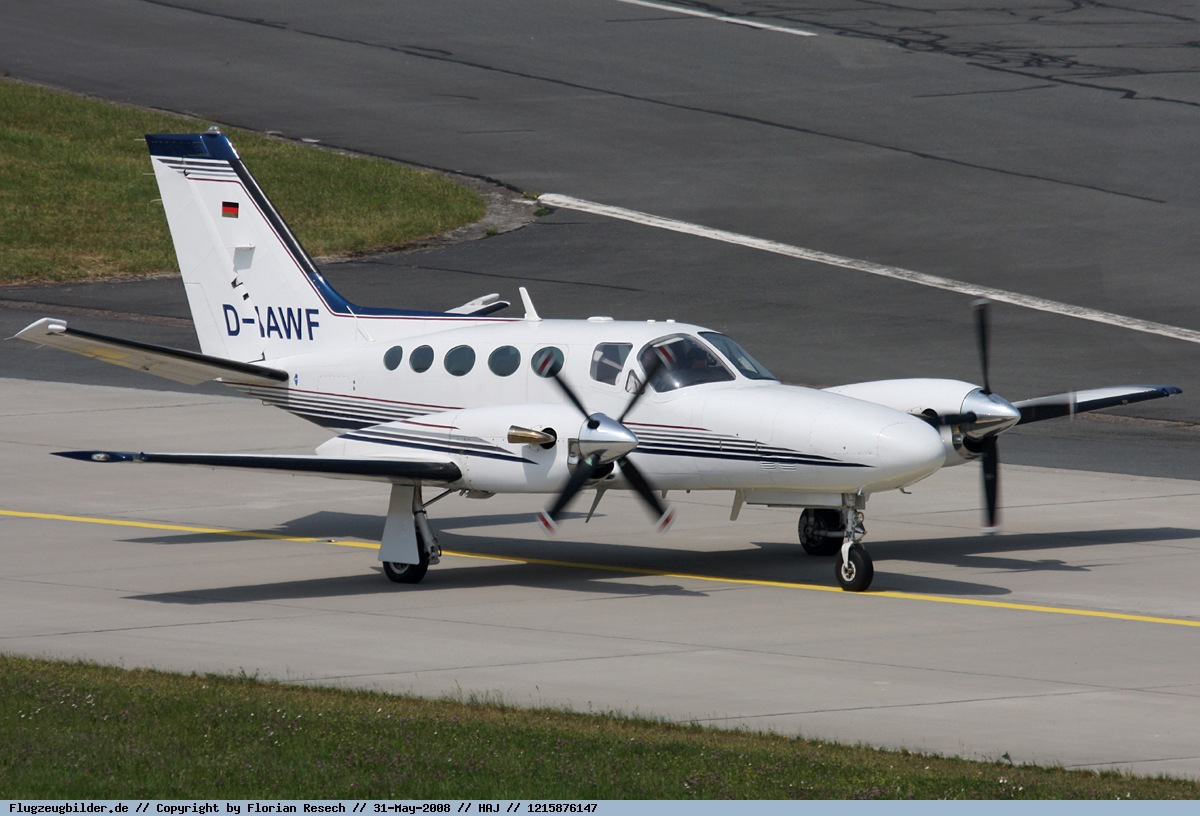 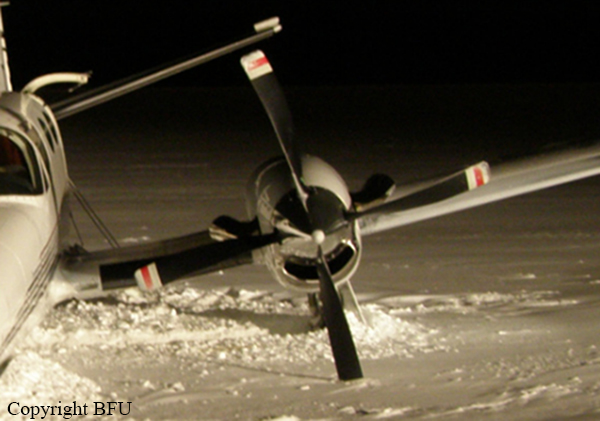 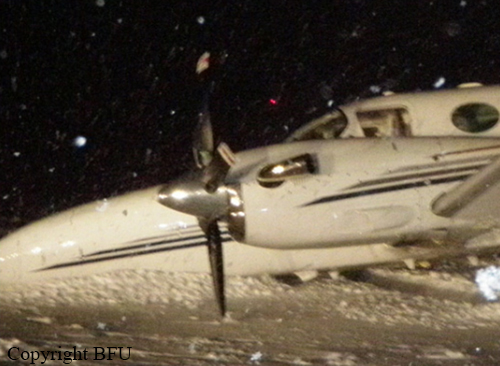 Crash of a Cessna 425 Conquest I in Harbor Springs

Type of aircraft:
Cessna 425 Conquest
Operator:
Lyden Air Company
Registration:
N425TN
Flight Phase:
Landing (descent or approach)
Flight Type:
Private
Survivors:
Yes
Site:
Airport (less than 10 km from airport)
Schedule:
Toledo - Harbor Springs
MSN:
425-0196
YOM:
1984
Location:
Harbor Springs
Michigan
Country:
United States of America
Region:
North America
Crew on board:
1
Crew fatalities:
Pax on board:
2
Pax fatalities:
Other fatalities:
Total fatalities:
0
Captain / Total flying hours:
1991
Captain / Total hours on type:
60.00
Aircraft flight hours:
2345
Circumstances:
The pilot reported that during cruise descent the airplane accumulated about 1/2-to 3/4-inch of rime ice between 8,000 and 6,000 feet. During the approach, the pilot noted that a majority of the ice had dissipated off the leading edge of both wings, although there was still trace ice on the aft-portion of the wing deice boots. The pilot maintained an additional 20 knots during final approach due to gusting winds from the north-northwest. He anticipated there would be turbulence caused by the surrounding topography and the buildings on the north side of the airport. While on short final for runway 28, the pilot maintained approximately 121 knots indicated airspeed (KIAS) and selected flaps 30-degrees. He used differential engine power to assist staying on the extended centerline until the airplane crossed the runway threshold. After crossing the threshold, the pilot began a landing flare and the airspeed slowed toward red line (92 KIAS). Shortly before touchdown, the airplane "abruptly pitched up and was pushed over to the left" and flight control inputs were "only marginally effective" in keeping the wings level. The airplane drifted off the left side of the runway and began a "violent shuddering." According to the pilot, flight control inputs "produced no change in aircraft heading, or altitude." The pilot advanced the engine throttles for a go-around as the left wing impacted the terrain. The airplane cartwheeled and subsequently caught fire. No pre-impact anomalies were noted with the airplane's flight control systems and deice control valves during a postaccident examination. No ice shapes were located on the ground leading up to the main wreckage. The reported surface wind was approximately 4 knots from the north-northwest.
Probable cause:
The pilot's failure to maintain aircraft control and adequate airspeed during landing flare. Contributing to the accident was the aerodynamic stall/mush encountered at a low altitude.
Final Report: 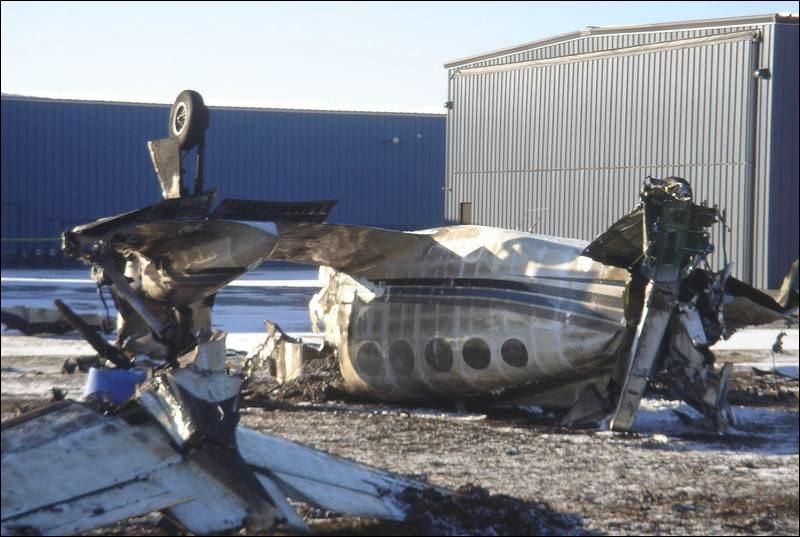