Registration:
N93012
Flight Phase:
Landing (descent or approach)
Flight Type:
Private
Survivors:
Yes
Site:
Airport (less than 10 km from airport)
Schedule:
Windsor Locks - Windsor Locks
MSN:
7023
YOM:
1942
Location:
Windsor Locks-Bradley
Connecticut
Country:
United States of America
Region:
North America
Crew on board:
3
Crew fatalities:
Pax on board:
10
Pax fatalities:
Other fatalities:
Total fatalities:
7
Captain / Total flying hours:
14500
Captain / Total hours on type:
7300.00
Copilot / Total flying hours:
22000
Copilot / Total hours on type:
23
Aircraft flight hours:
11388
Circumstances:
The vintage, former US military bomber airplane was on a tour that allowed members of the public to purchase an excursion aboard the airplane for an LHFE flight. The accident flight was the airplane’s first flight of the day. During the initial climb, one of the pilots retracted the landing gear, and the crew chief/flight engineer (referred to as the loadmaster) left the cockpit to inform the passengers that they could leave their seats and walk around the airplane. One of the pilots reported to air traffic control that the airplane needed to return to the airport because of a rough magneto. At that time, the airplane was at an altitude of about 600 ft above ground level (agl) on the right crosswind leg of the airport traffic pattern for runway 6. The approach controller asked the pilot if he needed any assistance, to which the pilot replied, “negative.” When the loadmaster returned to the cockpit, he realized that the airplane was no longer climbing, and the pilot, realizing the same, instructed the copilot to extend the landing gear, which he did. The loadmaster left the cockpit to instruct the passengers to return to their seats and fasten their seat belts. When the loadmaster returned again to the cockpit, the pilot stated that the No. 4 engine was losing power; the pilot then shut down that engine and feathered the propeller without any further coordination or discussion. When the airplane was at an altitude of about 400 ft agl, it was on a midfield right downwind leg for runway 6. Witness video showed that the landing gear had already been extended by that time, even though the airplane still had about 2.7 nautical miles to fly in the traffic pattern before reaching the runway 6 threshold. During final approach, the airplane struck the runway 6 approach lights in a right-wing-down attitude about 1,000 ft before the runway and then contacted the ground about 500 ft before the runway. After landing short of the runway, the airplane traveled onto the right edge of the runway threshold and continued to veer to the right. The airplane collided with vehicles and a deicing fluid tank before coming to rest upright about 940 ft to the right of the runway. A postcrash fire ensued. Both pilots and five passengers were killed and all six other occupants as well as one people on the ground were injured, five seriously.
Probable cause:
The pilot’s failure to properly manage the airplane’s configuration and airspeed after he shut down the No. 4 engine following its partial loss of power during the initial climb. Contributing to the accident was the pilot/maintenance director’s inadequate maintenance while the airplane was on tour, which resulted in the partial loss of power to the Nos. 3 and 4 engines; the Collings Foundation’s ineffective safety management system (SMS), which failed to identify and mitigate safety risks; and the Federal Aviation Administration’s inadequate oversight of the Collings Foundation’s SMS.
Final Report: 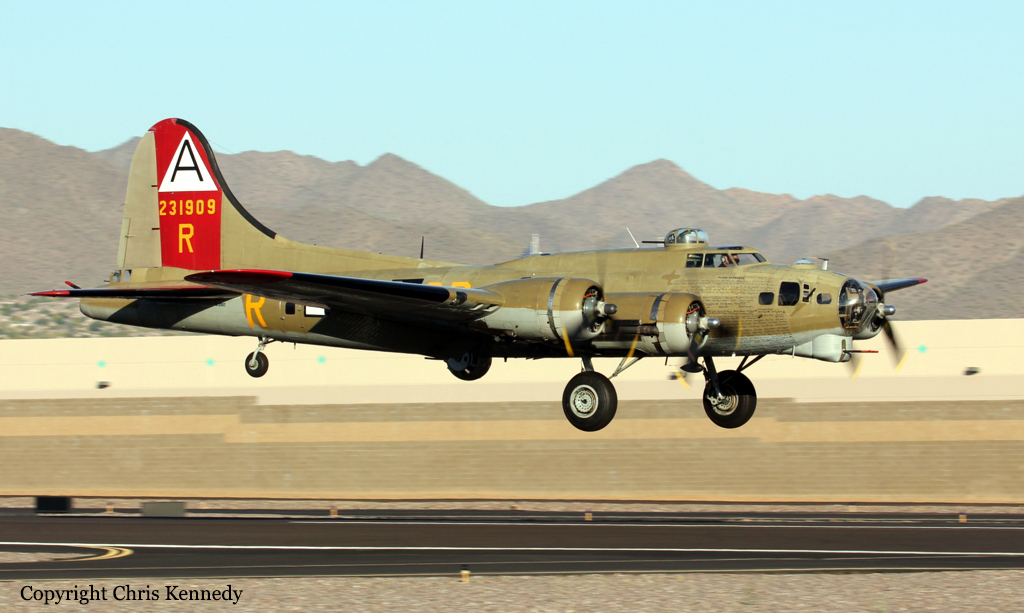 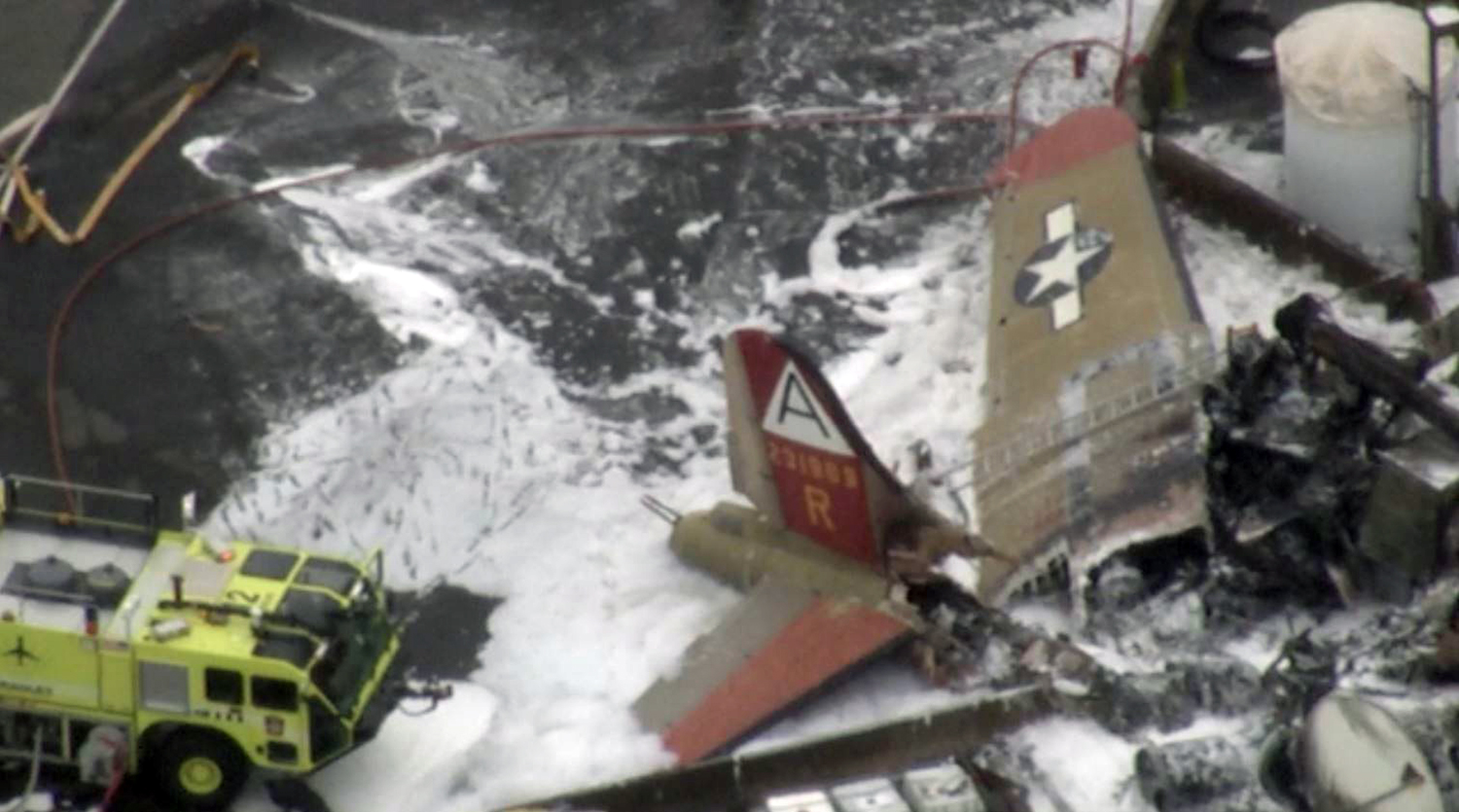 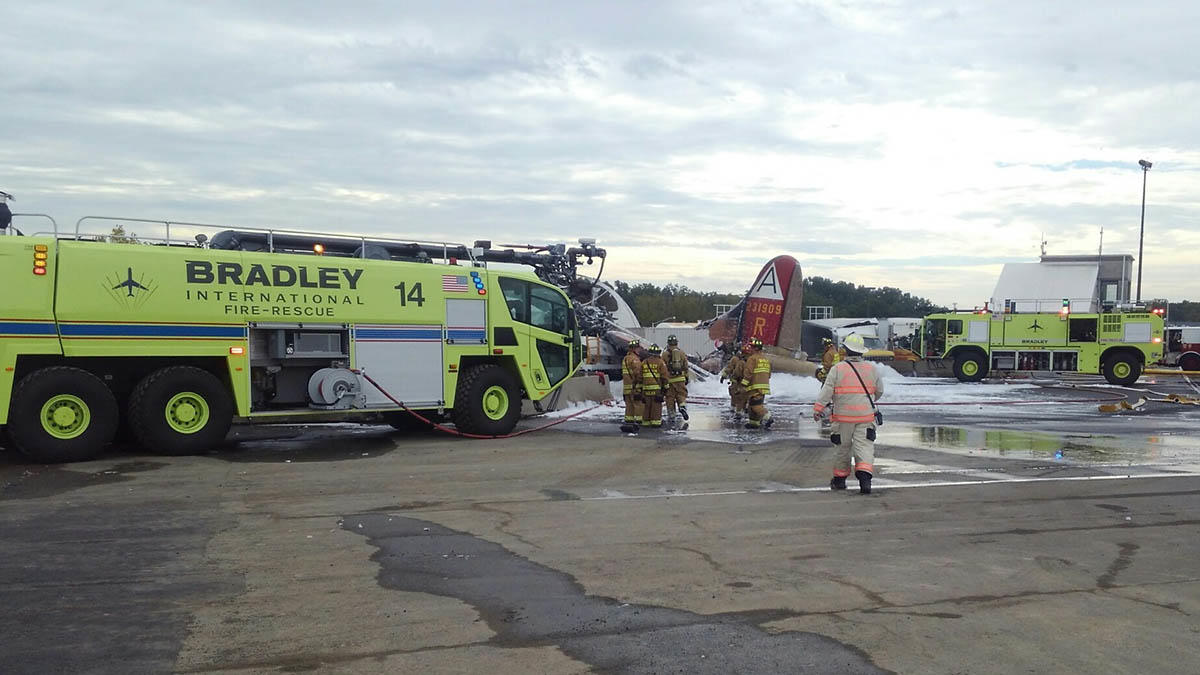 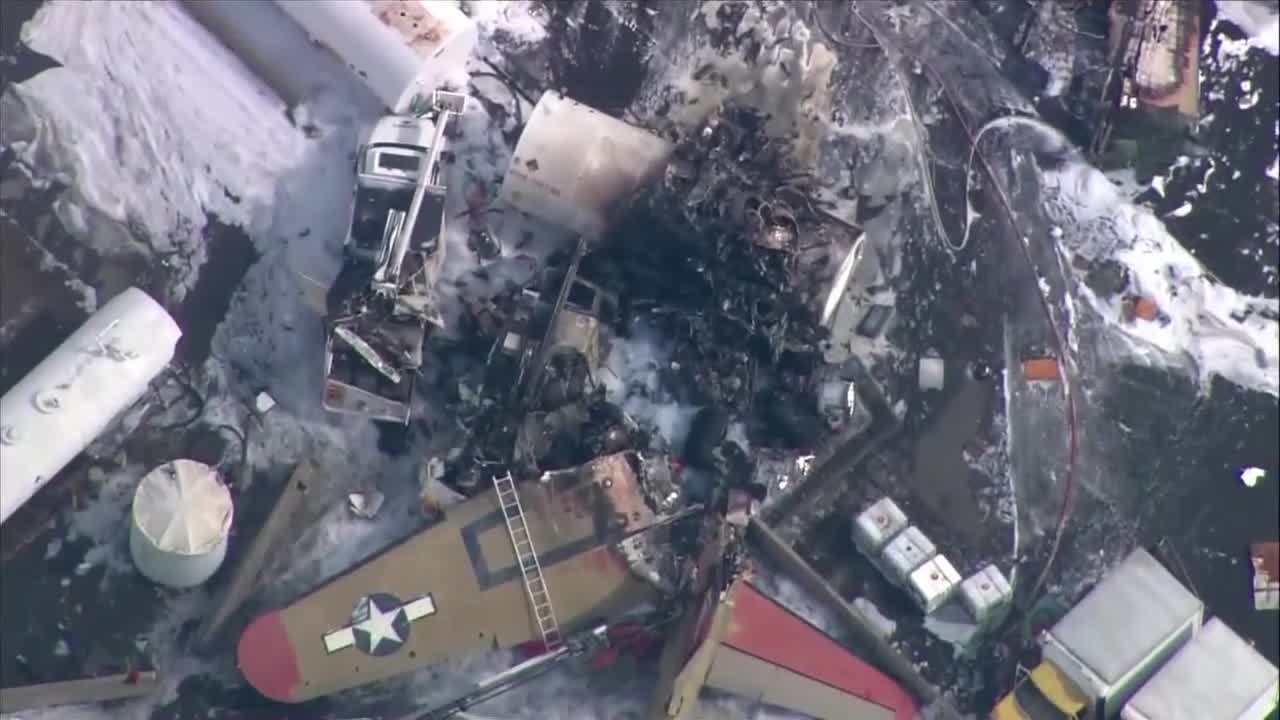 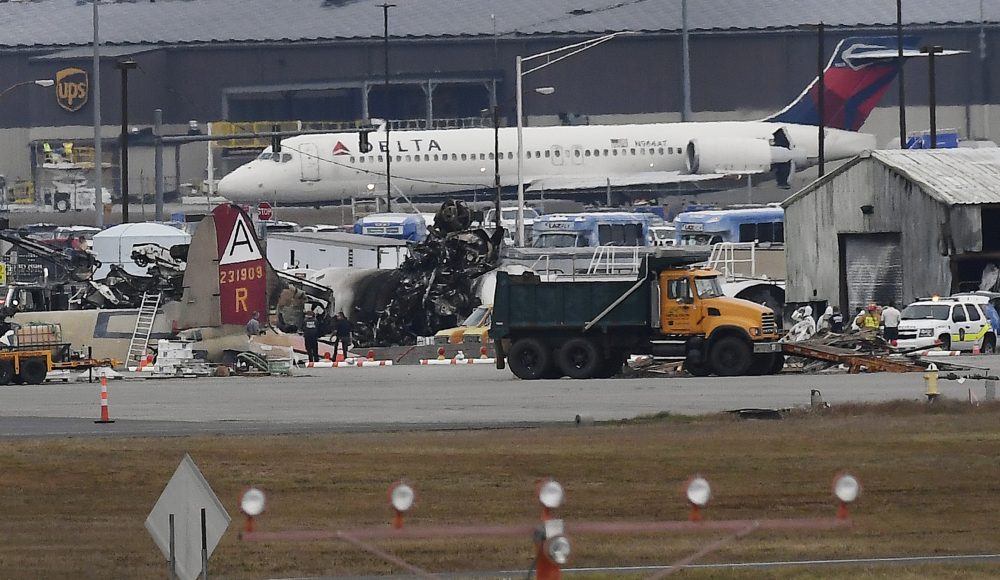 Registration:
N425EX
Flight Phase:
Takeoff (climb)
Flight Type:
Cargo
Survivors:
Yes
Site:
Airport (less than 10 km from airport)
Schedule:
Windsor Locks - Boston
MSN:
19095
YOM:
1966
Location:
Windsor Locks-Bradley
Connecticut
Country:
United States of America
Region:
North America
Crew on board:
3
Crew fatalities:
Pax on board:
0
Pax fatalities:
Other fatalities:
Total fatalities:
0
Captain / Total flying hours:
8500
Captain / Total hours on type:
3600.00
Aircraft flight hours:
46981
Circumstances:
N425EX was on the takeoff roll when the flightcrew experienced a 'thump' that resounded through the airplane. They also observed erratic engine indications from the n°3 engine. The captain aborted the takeoff and stopped the airplane on the runway. The fire warning system activated on the n°3 engine after the airplane came to rest. The crew attempted to extinguish the fire with the airplane's fire extinguishing system; however, they were unsuccessful. The post accident examination of the n°3 engine revealed the high pressure compressor disk had failed due to a fatigue crack that originated from a corrosion pit. The shrapnel from the disk penetrated the engine nacelle and severed the main fuel line for the engine. The fuel ignited and burned into the fuselage, igniting the 12,600 lbs of cargo (US Mail).
Probable cause:
A catastrophic and uncontained failure of the n°3 engine which resulted in a fuel fed fire.
Final Report:

Crash of a Learjet 23A in Windsor Locks: 3 killed

Type of aircraft:
Learjet 23
Operator:
Air Continental
Registration:
N101PP
Flight Phase:
Landing (descent or approach)
Flight Type:
Cargo
Survivors:
No
Site:
Airport (less than 10 km from airport)
Schedule:
Cleveland – Syracuse – Windsor Locks
MSN:
23-085
YOM:
1966
Flight number:
Night Air 4
Location:
Windsor Locks-Bradley
Connecticut
Country:
United States of America
Region:
North America
Crew on board:
2
Crew fatalities:
Pax on board:
1
Pax fatalities:
Other fatalities:
Total fatalities:
3
Captain / Total flying hours:
11039
Captain / Total hours on type:
1130.00
Copilot / Total flying hours:
5263
Copilot / Total hours on type:
189
Aircraft flight hours:
8393
Circumstances:
On June 4, 1984, an unmodified Gates Learjet 23A, N101PP, was being operated by Air Continental, Inc., Elyria, Ohio, on a regularly scheduled cargo flight transporting cancelled bank checks under 14 CFR 135. The flight departed Cleveland-Hopkins International Airport, Ohio, as Night Air 4 at 2200 eastern daylight time. After an uneventful flight, Night Air 4 arrived at Syracuse-Hancock International Airport, New York, at 2245. There was routine ground cargo handling at Syracuse; the airplane was not refueled. Night Air 4 departed Syracuse at 2311, was cleared to climb to 17,000 feet, and was handed off to Boston Air Route Traffic Control Center (Boston Center) at 2314. Boston Center cleared Night Air 4 to its requested altitude of FL290 and the en route portion of the flight was uneventful. At 2332, Night Air 4 was handed off at 16,000 feet during its descent to Bradley International Airport, Windsor Locks, Connecticut Approach Control. Approach control identified the airplane, cleared it for a visual approach to runway 33, and at 2336 gave Night Air 4 a turn to position the airplane on final approach at 10 miles from the airport. At 2338:22, Night Air 4 reported that the airplane was on final approach for runway 33, and at 2338:25 the air traffic control tower operator cleared the flight to land. At 2341:18, the control tower operator reported to approach control that there had been an accident at the airport. Fifteen witnesses, who either heard and/or saw the accident, were interviewed, and with the exception of a few minor points, all of the witnesses described basically the same accident sequence. The airplane was on a normal approach to runway 33 with no apparent abnormalities. When the airplane was about 200 feet over the approach lights, an increase in engine thrust was heard and the airplane halted its rate of descent in what two pilot witnesses thought was an apparent attempt to go-around. Immediately afterward, Night Air 4 began what appeared to be a level turn to the right. As the airplane went through about 90° of turn, the wings of the aircraft were nearly vertical to the ground. The airplane's nose dropped below the horizon and the airplane descended into the ground in a nose low attitude. The witnesses stated that they saw an explosion which was followed by intense ground fire. None of the witnesses reported any significant lateral or vertical changes while the aircraft was on short final or during the 90' right turn prior to its descent into the ground. Many witnesses stated that they saw some lights illuminated on the aircraft but none reported seeing the landing lights, located on the landing gear, or the landing gear in the extended position. Witnesses reported no inflight fire, smoke, or airframe separation before the crash. All three occupants were killed.
Probable cause:
An uncommanded roll to the right which caused the airplane to roll about 90°and descend into the ground. The cause of the uncommanded roll was an asymmetric retraction of the flight spoilers wherein the left spoiler retracted and the right spoiler did not. The Safety Board could not determine the reason for the right spoiler malfunction.
Final Report:
Subscribe to Windsor Locks-Bradley