Crash of a Cessna 510 Citation Mustang in Daytona Beach

Type of aircraft:
Cessna 510 Citation Mustang
Operator:
Ejets
Registration:
N163TC
Flight Phase:
Landing (descent or approach)
Flight Type:
Training
Survivors:
Yes
Site:
Airport (less than 10 km from airport)
Schedule:
Daytona Beach - Daytona Beach
MSN:
510-0039
YOM:
2007
Location:
Daytona Beach-Intl
Florida
Country:
United States of America
Region:
North America
Crew on board:
2
Crew fatalities:
Pax on board:
0
Pax fatalities:
Other fatalities:
Total fatalities:
0
Captain / Total flying hours:
2533
Captain / Total hours on type:
90.00
Copilot / Total flying hours:
7500
Aircraft flight hours:
2380
Circumstances:
The pilot was receiving a checkride from a designated pilot examiner for his single-pilot type rating in a turbine airplane. After a series of maneuvers, emergencies, and landings, the examiner asked the pilot to complete a no-flap landing. The pilot reported that he performed the Before Landing checklist with no flaps and believed that he had put the gear down. During touchdown, the pilot felt a "thump" and thought a tire had blown; however, he saw that the landing gear handle was in the "up" position, and he noted that the landing gear warning horn did not sound because he had performed a no-flaps landing. The examiner confirmed that the landing gear handle was in the "up" position. The pilot reported that there were no preaccident mechanical malfunctions or failures with the airplane that would have precluded normal operation. A Federal Aviation Administration inspector who examined the airplane reported that the landing gear handle was in the "up" position and that the fuselage had sustained substantial damage. The landing gear was lowered and locked into place without issue after the airplane was lifted from the runway.
Probable cause:
The pilot's failure to lower the landing gear before landing. Contributing to the accident was the examiner's failure to check that the landing gear was extended.
Final Report: 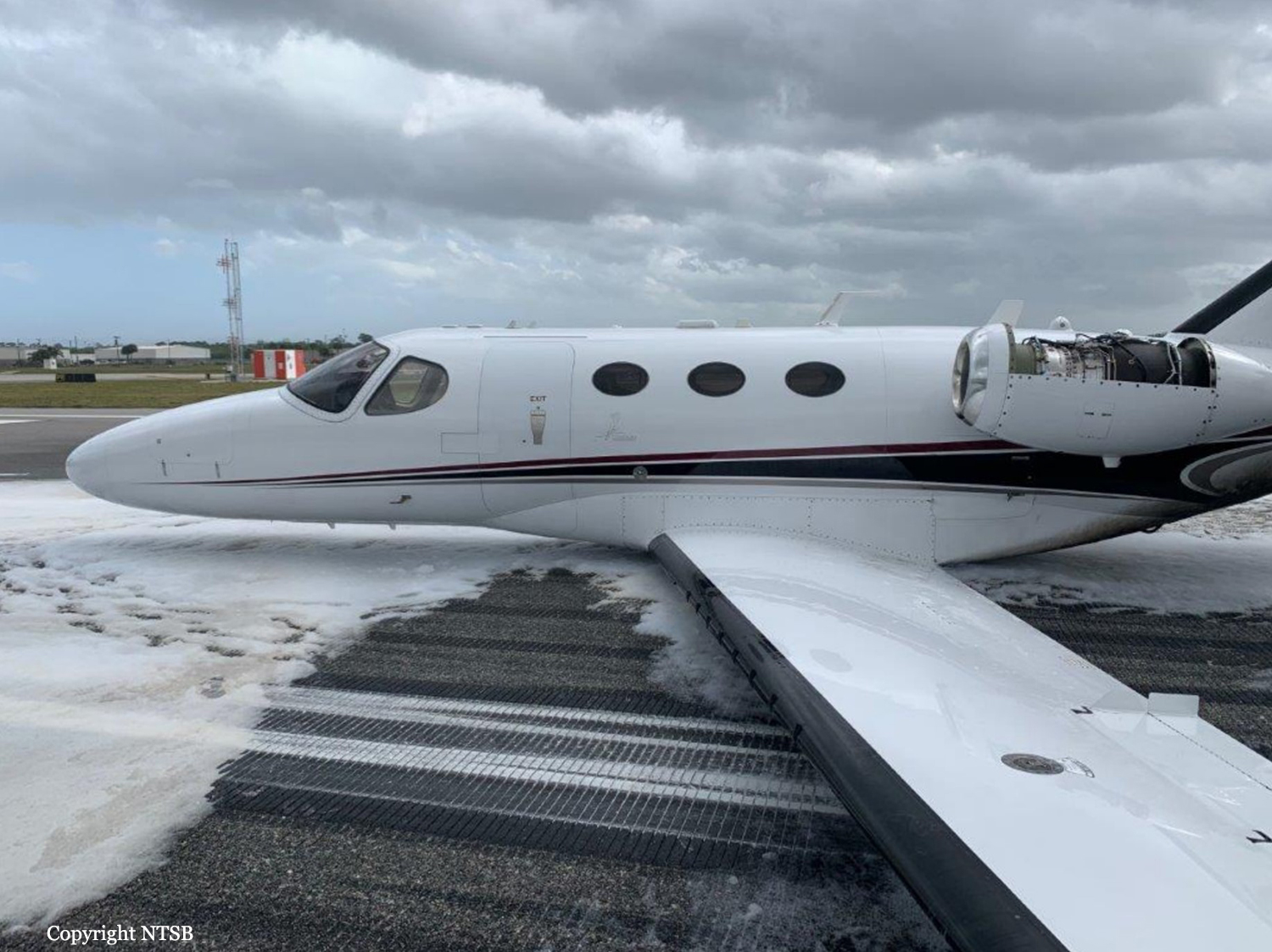 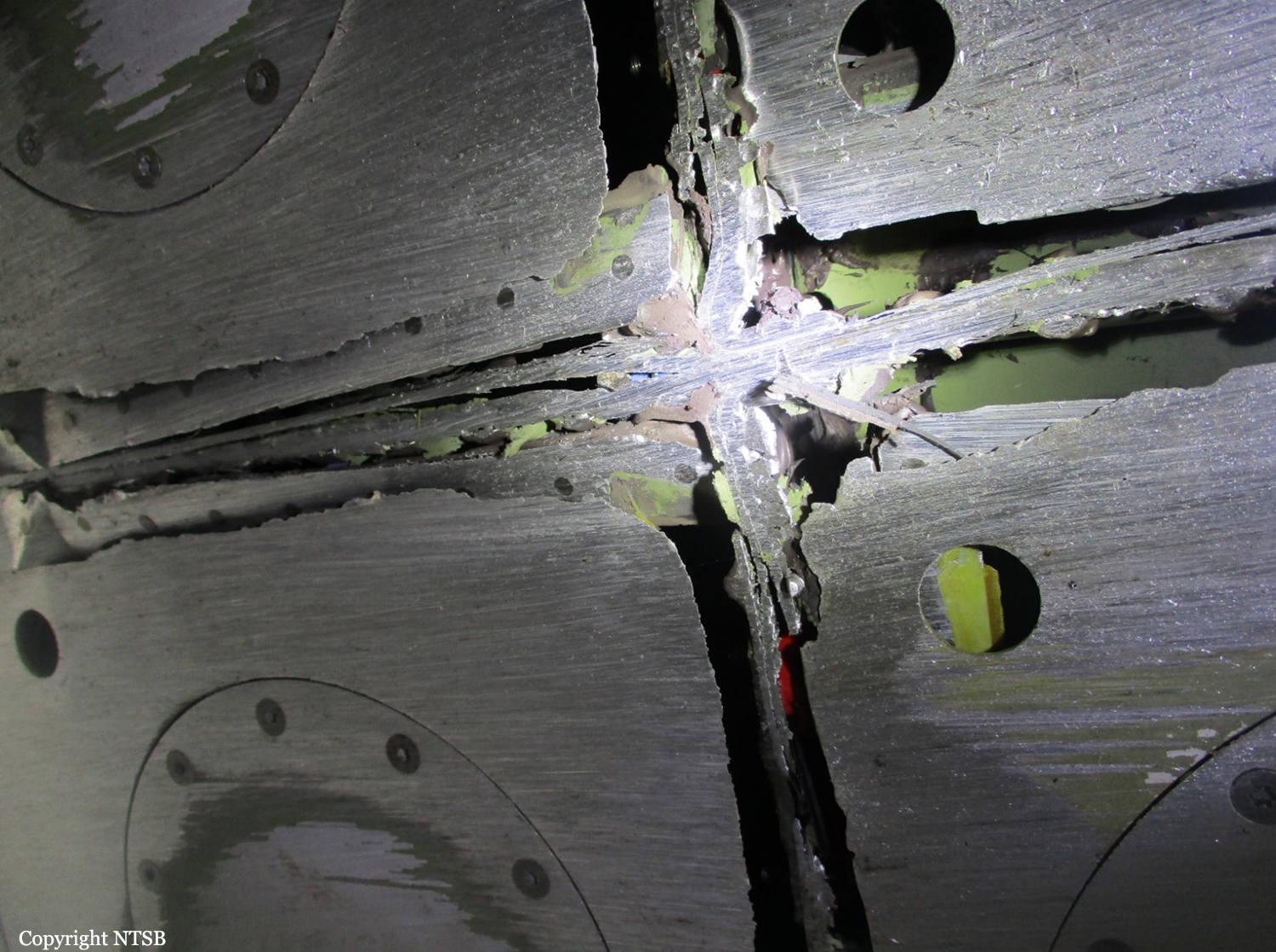 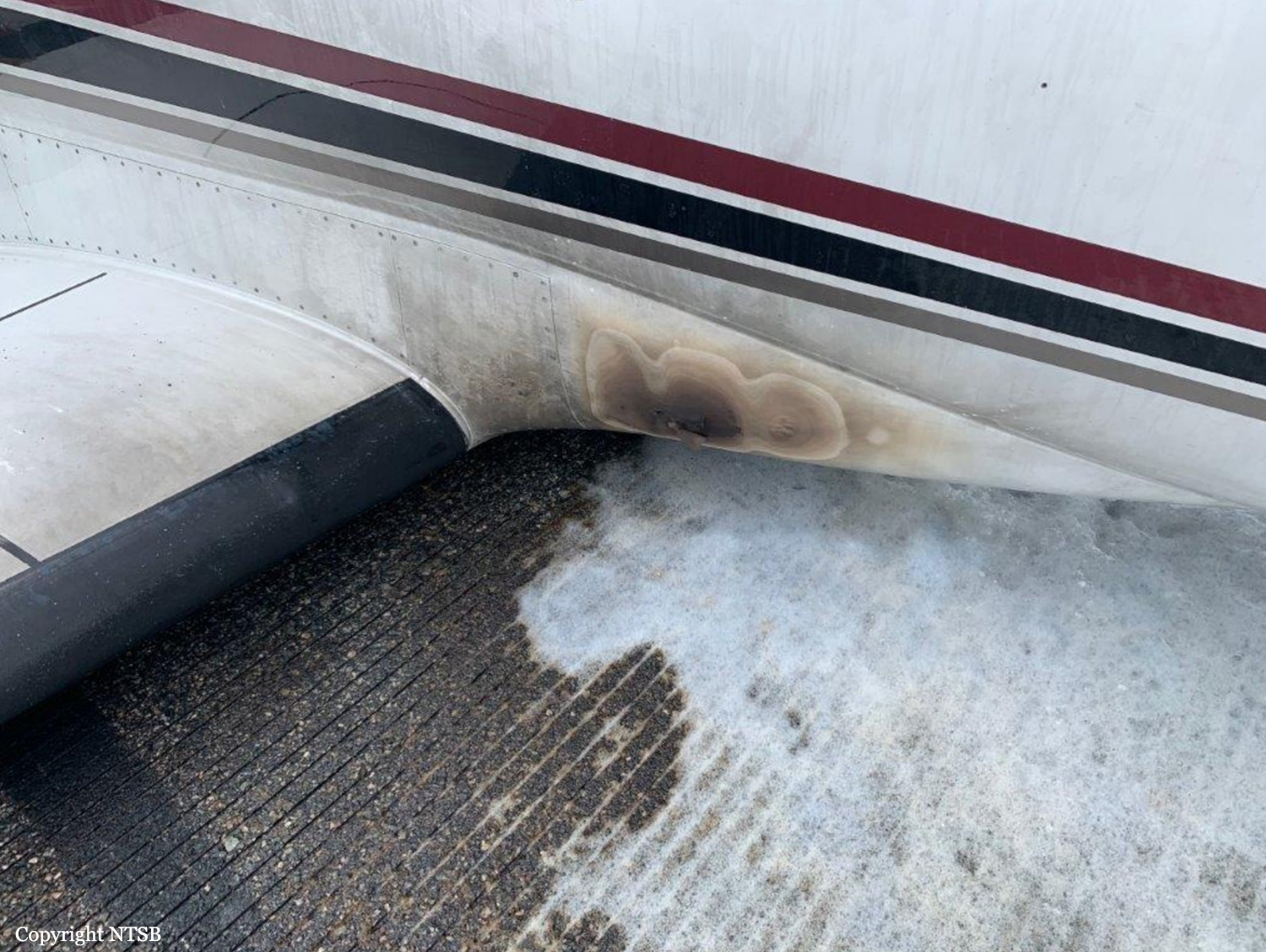 Type of aircraft:
Rockwell Shrike Commander 500
Operator:
Commonwealth Aviation
Registration:
N73U
Flight Phase:
Landing (descent or approach)
Flight Type:
Private
Survivors:
Yes
Site:
Airport (less than 10 km from airport)
Schedule:
Daytona Beach - New Smyrna Beach
MSN:
500-3162
YOM:
1963
Location:
Daytona Beach
Florida
Country:
United States of America
Region:
North America
Crew on board:
1
Crew fatalities:
Pax on board:
1
Pax fatalities:
Other fatalities:
Total fatalities:
1
Captain / Total flying hours:
1470
Captain / Total hours on type:
574.00
Aircraft flight hours:
3360
Circumstances:
The pilot departed in the twin-engine airplane with an unknown quantity of fuel and a fuel quantity indicating system that was known to be inaccurate. Immediately after takeoff, approximately 1/2 mile beyond the departure end of the runway, witnesses reported the engine noise from the accident airplane as "surging" as the airplane passed overhead, and one witness described a "radical" turn back to the airport. Two witnesses stated that only one engine was running, and added that it was "revving," and would then stop before revving up again. During the descent to the airport, radar data showed the airplane at 93 knots 700 feet and 1 mile from the runway, and at 90 knots at 500 feet and 1/2 mile from the runway, but the airplane crashed prior to the approach end of the runway. Post accident examination of the wreckage revealed no evidence of a pre accident mechanical malfunction. The fuel system had a capacity of 226 gallons, was serviced through a single port on top of the left wing, and the tanks were interconnected to a center fuel sump that fed both engines. The fuel cells were opened through access panels and each was intact and contained only trace amounts of fuel. The airplane was leveled, the drain petcock was opened at the center fuel cell sump, and 1 quart of fuel was drained.
Probable cause:
A total loss of engine power due to fuel exhaustion as a result of the pilot’s inadequate preflight inspection.
Final Report: 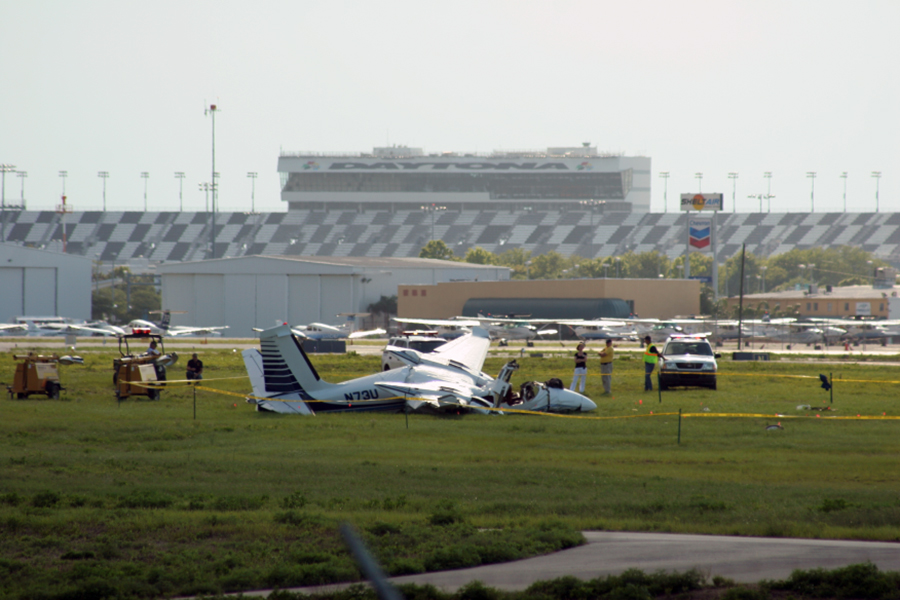 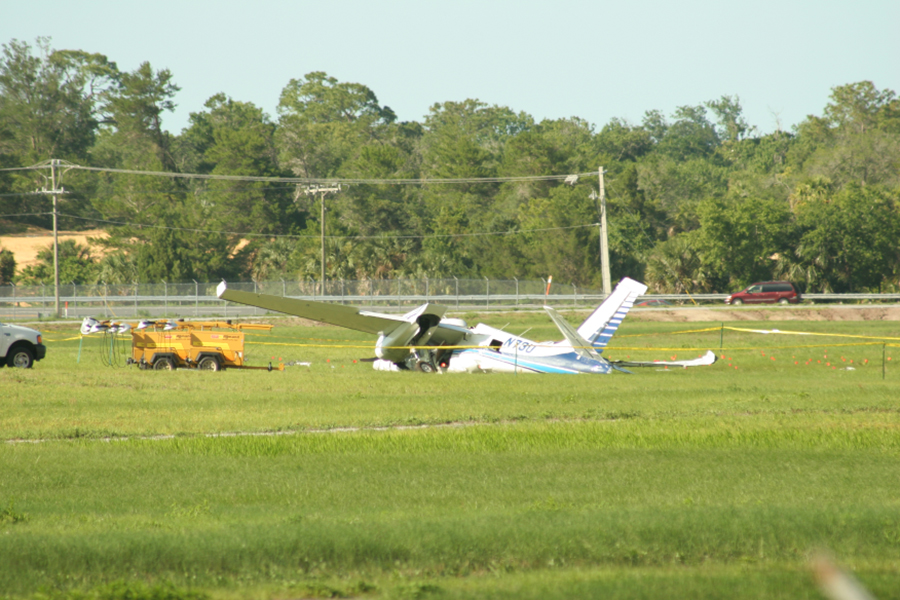 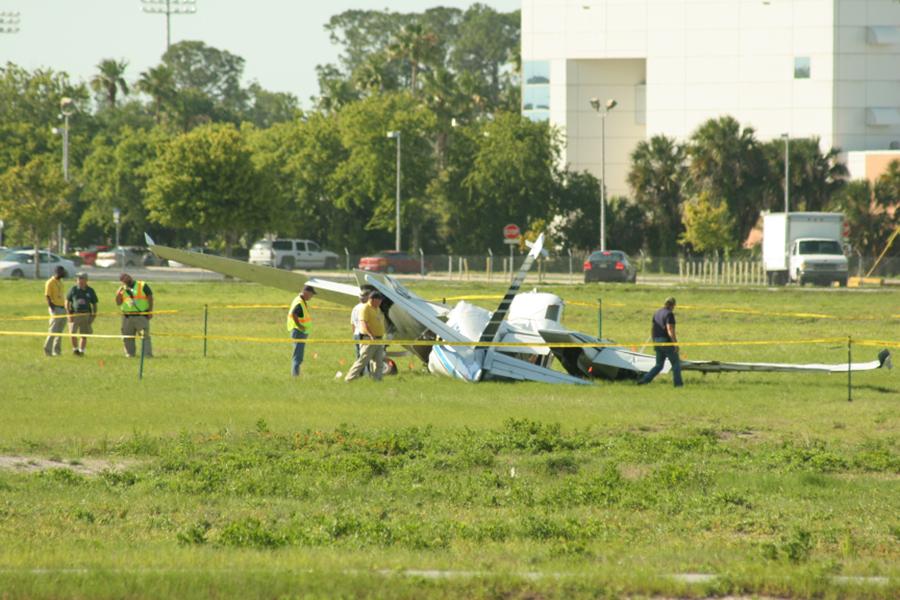 Crash of a Beechcraft 300 Super King Air in Port Orange

Type of aircraft:
Beechcraft 300 Super King Air
Operator:
Mass Bay Kustom Leasing
Registration:
N301KS
Flight Phase:
Landing (descent or approach)
Flight Type:
Private
Survivors:
Yes
Site:
Airport (less than 10 km from airport)
Schedule:
Stuart – Daytona Beach
MSN:
FA-61
YOM:
1985
Location:
Port Orange-Spruce Creek
Florida
Country:
United States of America
Region:
North America
Crew on board:
1
Crew fatalities:
Pax on board:
1
Pax fatalities:
Other fatalities:
Total fatalities:
0
Captain / Total flying hours:
3495
Captain / Total hours on type:
147.00
Circumstances:
The pilot stated that he initiated a fuel transfer due to a fuel imbalance. To affect the fuel transfer, he said he "began crossfeed right to left." When the airplane was about 5 to 10 miles away from Spruce Creek Airport, the pilot said he began his descent from 12,500, and also executed a left turn to begin setting up to land, when suddenly, both engines ceased operating. When he leveled the wings both engines restarted due to auto-ignition. He said the fuel gages showed 300 to 350 lbs of fuel for the right tank, and 100 to 150 pounds on the left, so he decided to continue his approach to Spruce Creek Airport. As he approached Spruce Creek Airport, he again entered a left bank to prepare for a left base to runway 23, and while established in the left turn, both engines ceased operating a second time. He said he did not think he could reach the runway, and decided to make an landing on a taxiway. When the wings became level after the turn, he said both engines again restarted while in the vicinity of the beginning of the taxiway. As he was about to land, he said a car pulled out onto the taxiway, and stopped on the centerline, so he applied power to avoid the car. He said he climbed straight out, and when he made a climbing left turn, he said the engines ceased operating a third time, and the airplane descended towards a cluster of condos. With no runway or clear area in sight, the pilot said he guided the airplane to a retention pond. Follow-on/detailed examinations of the aircraft, engines, and propellers were conducted by an FAA Inspector, as well as technical representatives from Raytheon Aircraft Company, Pratt & Whitney Canada, and Hartzell Propeller Company, and no pre accident anomalies were noted with the airframe, flight controls, engines/accessories, or propellers. According to the FAA Inspector, and the technical representative from the airplane manufacturer, Raytheon Aircraft Company, the pilot was transferring fuel from the left fuel tank to the right fuel tank, and with the reduced amount of fuel in the left tank, as he performed left turns, the engine ceased operating. The Raytheon Aircraft Company representative stated that the Pilot Operating Handbook specifies the use of crossfeed for those times when the airplane is operating on a single engine.
Probable cause:
The pilot's inadequate management of the airplane's fuel system, which resulted in fuel starvation, a loss of engine power, a forced landing, and damage to the airplane during the landing.