Very hard landing of a Boeing 737-4Q8 in Exeter

Registration:
G-JMCY
Flight Phase:
Landing (descent or approach)
Flight Type:
Cargo
Survivors:
Yes
Site:
Airport (less than 10 km from airport)
Schedule:
East Midlands – Exeter
MSN:
25114/2666
YOM:
1994
Flight number:
NPT05L
Location:
Exeter
Devon
Country:
United Kingdom
Region:
Europe
Crew on board:
2
Crew fatalities:
Pax on board:
0
Pax fatalities:
Other fatalities:
Total fatalities:
0
Circumstances:
The crew departed East Midlands Airport on a night cargo flight to Exeter on behalf of the Royal Mail. For unknown reasons, the aircraft landed hard at Exeter Airport runway 29. The crew was able to vacate the runway and park the aircraft on apron where major damages to the fuselage were noted. Due to the extent of damages, the cargo could not be unloaded. The aircraft seems to be damaged beyond repair. 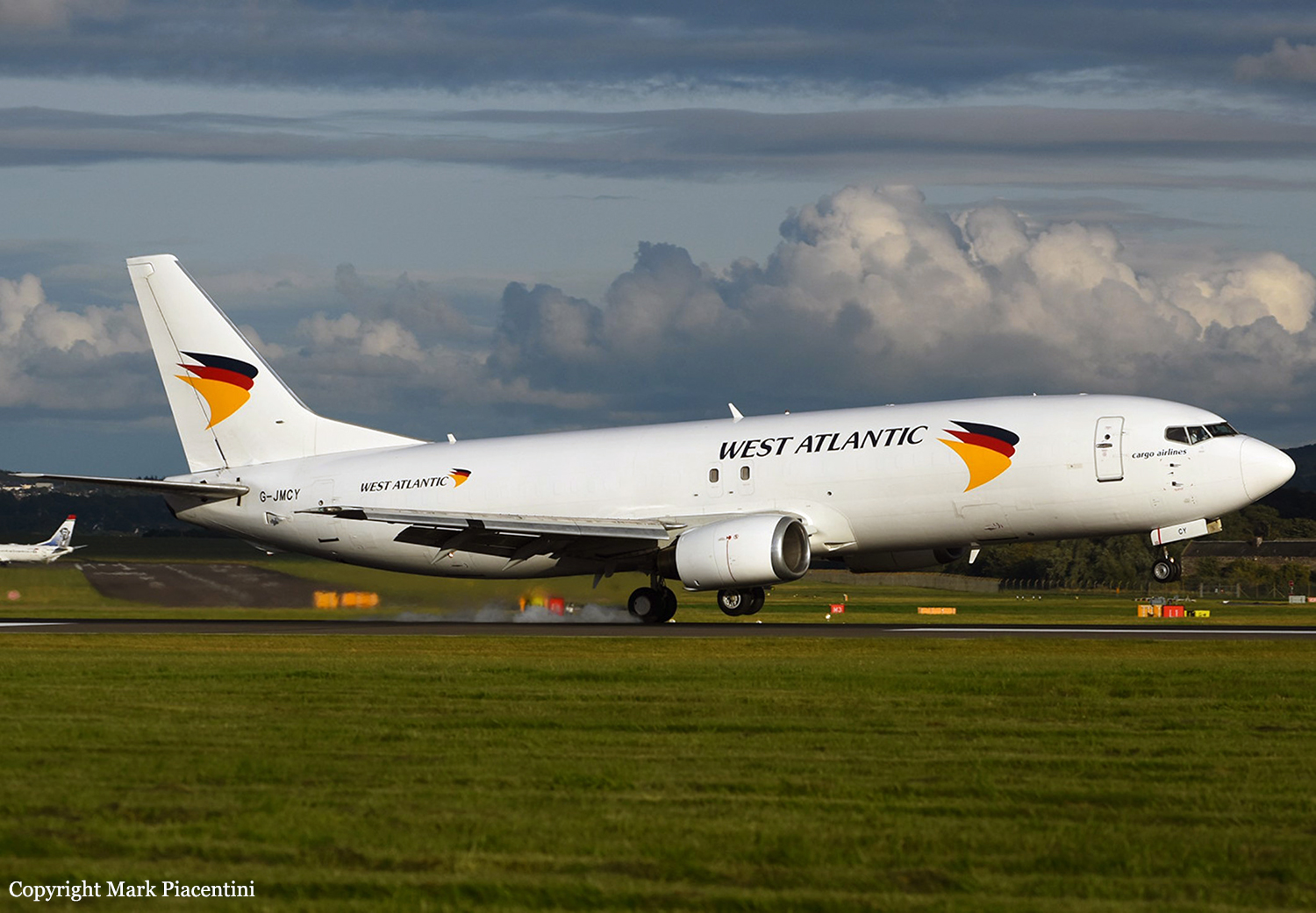 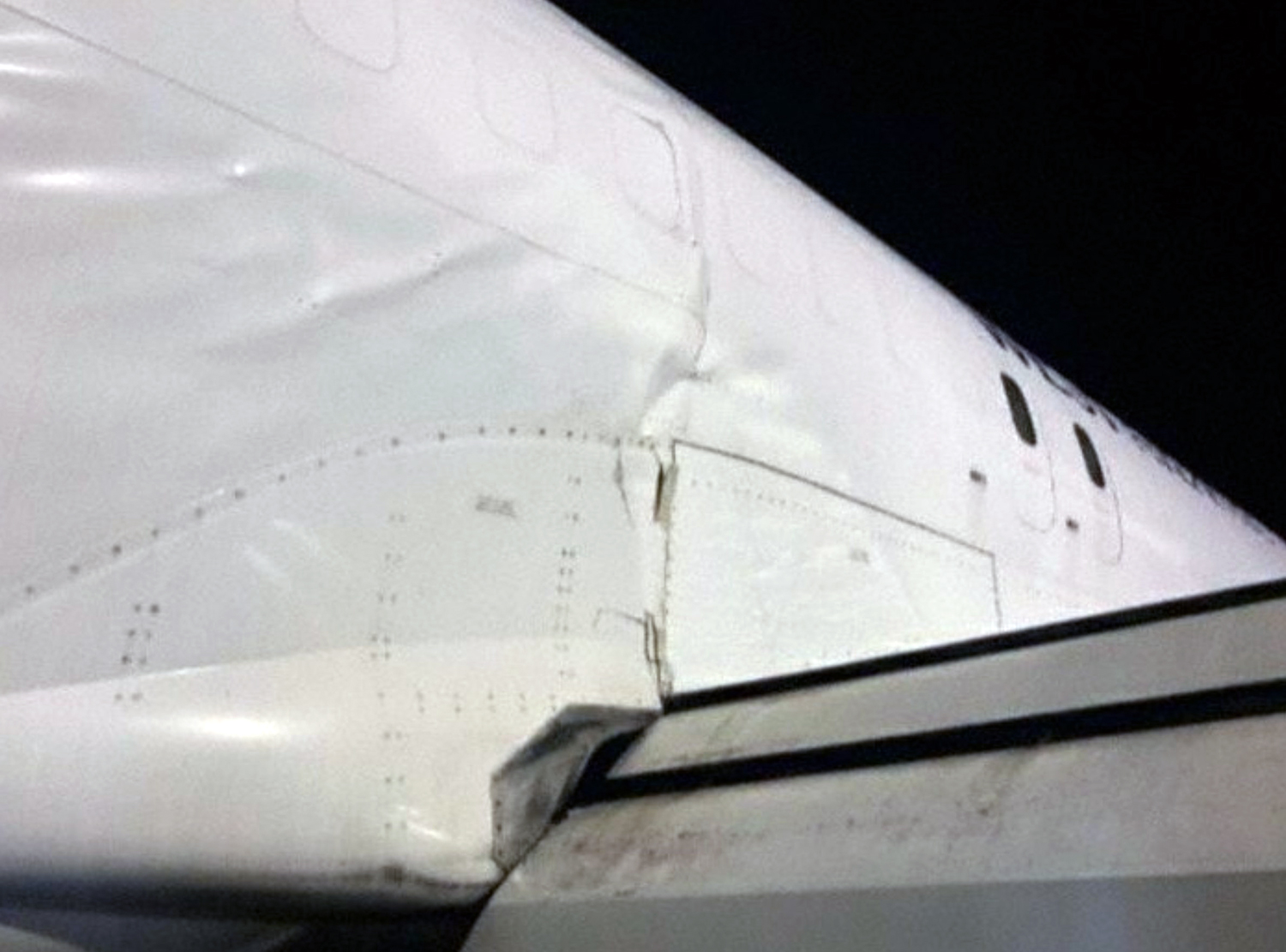 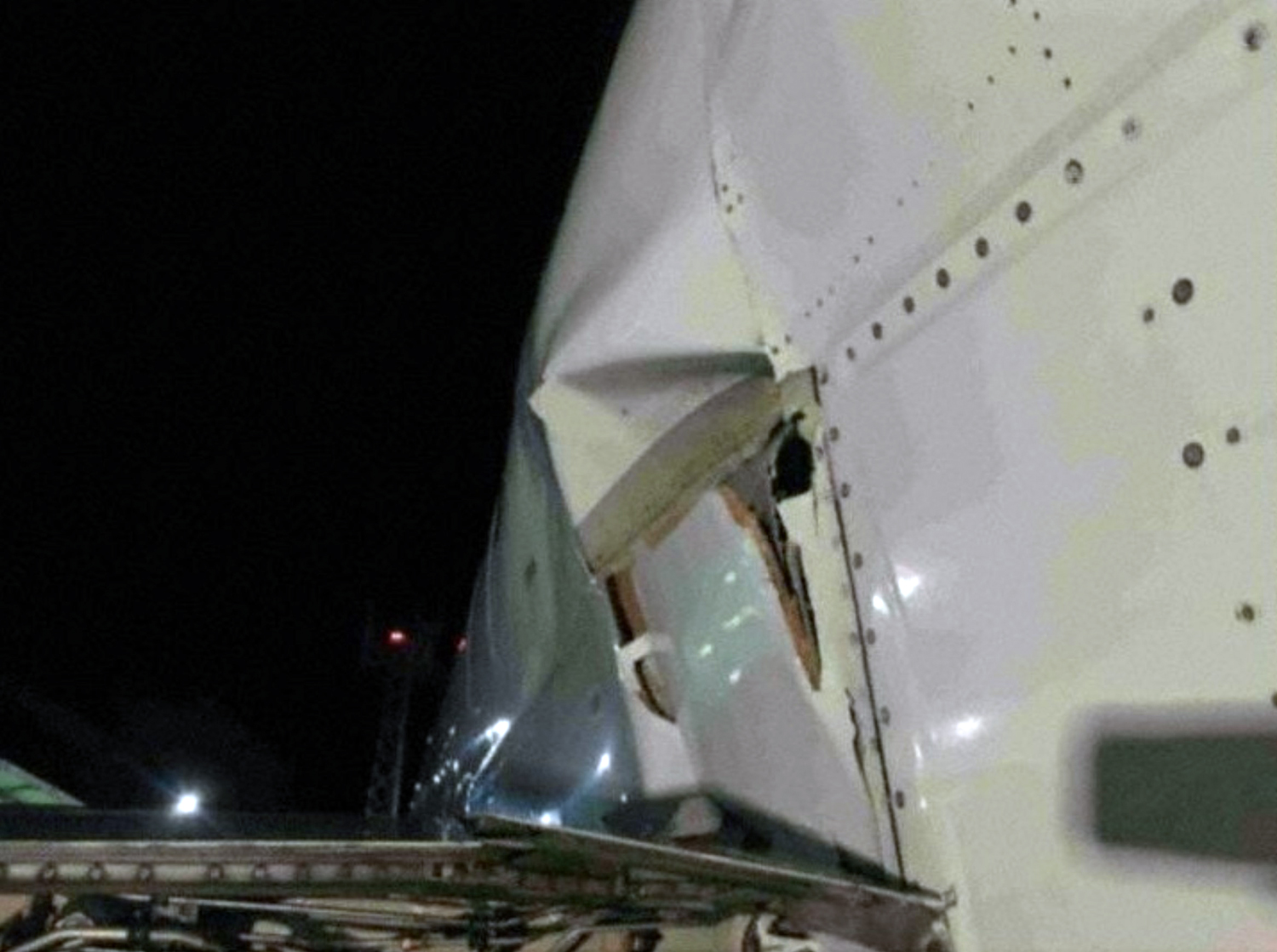 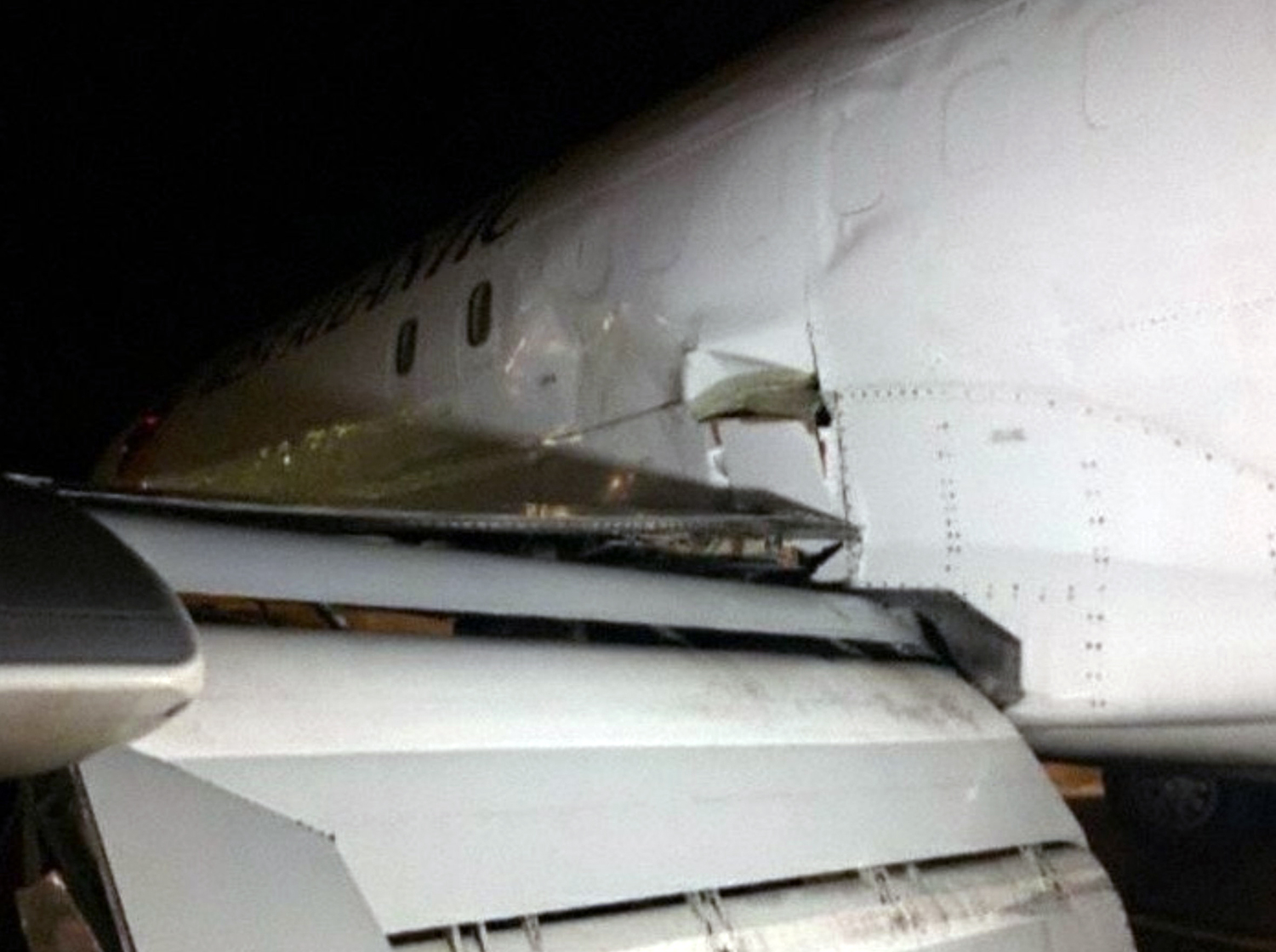 Type of aircraft:
Piper PA-46 (Malibu/Meridian/Mirage/Matrix/M-Class)
Operator:
Blackbrook Aviation
Registration:
N961JM
Flight Phase:
Landing (descent or approach)
Flight Type:
Charter/Taxi (Non Scheduled Revenue Flight)
Survivors:
Yes
Site:
Airport (less than 10 km from airport)
Schedule:
Chambéry – Dunkeswell
MSN:
46-97122
YOM:
2002
Location:
Dunkeswell
Devon
Country:
United Kingdom
Region:
Europe
Crew on board:
1
Crew fatalities:
Pax on board:
1
Pax fatalities:
Other fatalities:
Total fatalities:
0
Captain / Total flying hours:
8899
Captain / Total hours on type:
2095.00
Circumstances:
The pilot was carrying out an IFR flight from Chambery in France to Dunkeswell Aerodrome using Exeter Airport as his diversion. Before departure from Chambery he had checked the weather conditions at Exeter and other airfields in its vicinity from the available TAFs and METARs covering the period of the flight and he was satisfied that conditions were suitable. He had also contacted a friend who was also a commercial pilot at about 1530 hrs. This friend lived near Dunkeswell Aerodrome and had estimated the cloud base to be approximately 1,500 feet. The aircraft departed Chambery at 1605 hrs and, apart from some airframe icing on departure, it had an uneventful transit at FL270. Approaching the south coast of England, the aircraft was descended to FL60 and it left controlled airspace at Southampton in good VMC with the lights along the south coast clearly visible. The weather at Exeter at 1720 hrs was: surface wind 130°/08 kt, varying between 110° and 170°; visibility 6,000 metres; cloud SCT 005, BKN 012; temperature +9° C; dew point +8° C and QNH 1011 mb. With approximately 50 miles to run to his destination, the pilot attempted to contact Dunkeswell Radio but received no reply so he assumed the airfield had closed for the night. The lights of Dunkeswell village and the industrial site at the north-eastern edge of the aerodrome were visible but they had a milky appearance as if shining through scattered mist pockets. The aircraft was descended to 2,600 feet on the Exeter QNH and the main altimeter was set to the Dunkeswell QFE by subtracting 31 mb from the Exeter QNH to allow for the Dunkeswell elevation of 850 feet. The pilot was utilising two GPS navigation systems programmed to provide him with centreline information for Runway 23 on a CDI (Course Deviation Indicator) scale of 0.3 nm for full deflection. Whilst there was no runway lighting at Dunkeswell, the pilot had placed white reflective panels on the right edge of Runway 23. When illuminated by the aircraft landing light, these panels would show the right hand edge of the runway and also indicate the touchdown zone of the runway. The panels measured 18 cm by 9.5 cm and were mounted vertically on low, black plastic supports. The threshold for Runway 23 is displaced 290 metres from the road which runs along the northern aerodrome boundary and the first reflector was 220 metres beyond the displaced threshold. The reflectors had been positioned over a distance of 460 metres with the distances between them varying between 15 and 49 metres. The white centreline markings would also have been visible in the landing light once the aircraft was low enough. The end of the 46 metre wide runway was 280 metres from the last reflector. The pilot had carried out night approaches and landings to Runway 23 at Dunkeswell using similar visual references on many previous occasions. The pilot identified the lights of the industrial site earlier than he expected at six miles whilst maintaining 2,600 feet on the Exeter QNH. He cancelled his radar service from Exeter, which had also provided him with ranges and bearings from Dunkeswell, and made blind transmissions regarding his position and intentions on the Dunkeswell Radio frequency. Having commenced his final approach, the pilot noticed there was scattered cloud in the vicinity of the approach path. At about 2.5 nm from the runway threshold and approximately 800 feet agl, the pilot noticed a mist pocket ahead of the aircraft and so he decided to initiate a go-around and divert to Exeter. At that point the aircraft was configured with the second stage of flap lowered, the landing gear down and the airspeed reducing through 135 kt with all three aircraft landing lights selected ON. The pilot increased power and commenced a climb but he became visual with the runway once more and so he reduced power and resumed the approach. A high rate of descent developed and the radio altimeters automatic 50 feet audio warning sounded. The pilot started to increase engine power but he was too late to prevent the severe impact with terrain that followed almost immediately. The aircrafts wings were torn off as it passed between two trees and the fuselage continued across a grass field, remaining upright until it came to a stop. The passenger vacated the aircraft immediately through the normal exit in the passenger cabin and then returned to assist the pilot. Having turned off the aircraft's electrical and fuel systems the pilot also left the aircraft through the normal exit. There was a leak from the oxygen system, which had been disrupted in the accident and the pilot was unable to remove the fire extinguisher from its stowage due to the deformation of the airframe. He contacted Exeter ATC using his mobile telephone to inform them of the accident and they initiated the response of the emergency services.
Probable cause:
The investigation concluded that the accident had occurred due to an attempt to land at night in fog, at an airfield with no runway lighting and only limited cultural lighting to provide visual
orientation; these visual references were lost when the fog was entered. The aircraft impacted the treeline at the top of the valley 1,600 metres short of the displaced threshold and 200 metres to the right of the centreline.
Final Report: 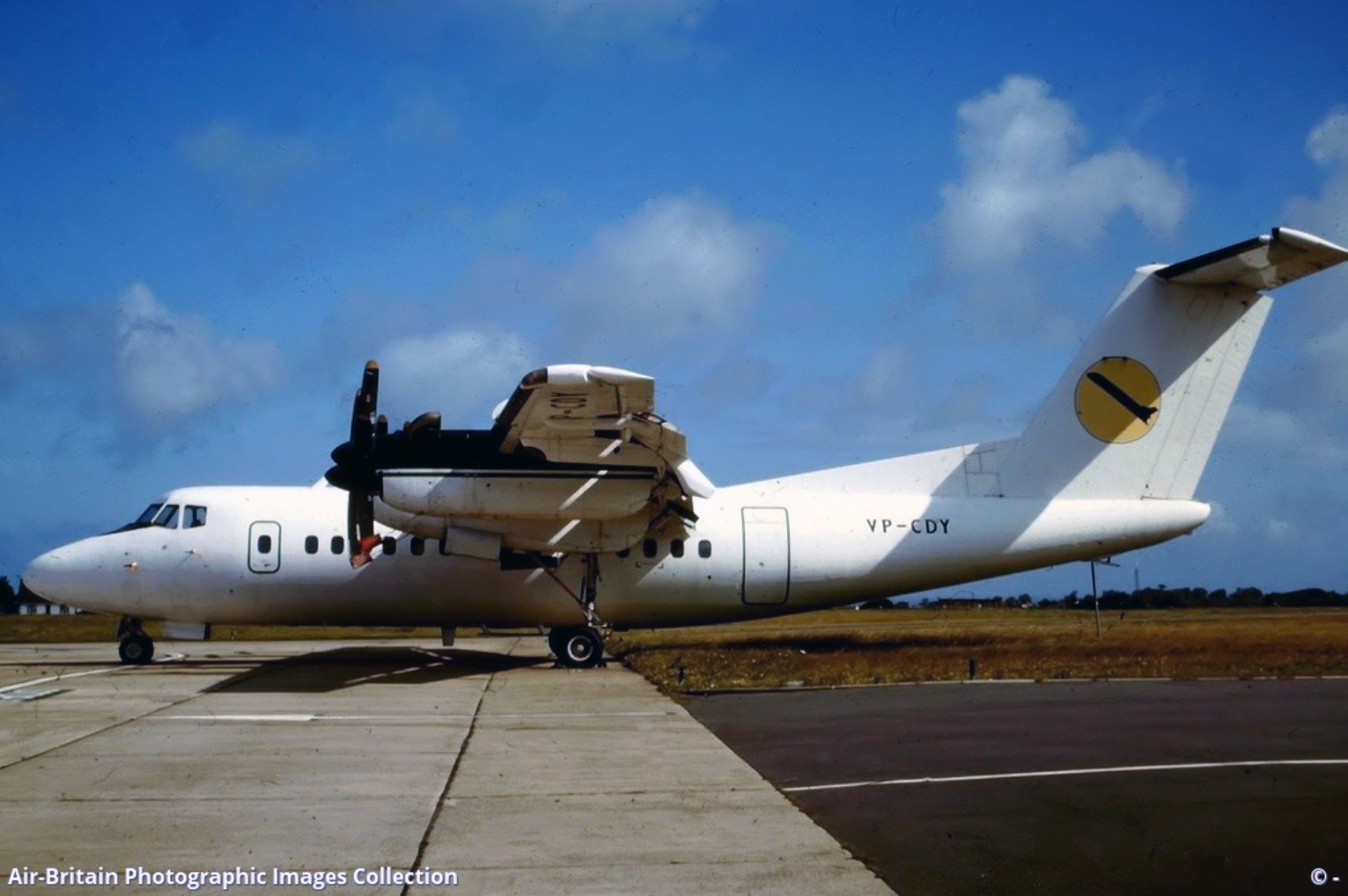 Crash of a Consolidated PBY-5A Catalina off Plymouth

Type of aircraft:
Consolidated PBY-5A Catalina
Operator:
Jonathan Seagull Holdings
Registration:
C-FOWE
Flight Phase:
Landing (descent or approach)
Flight Type:
Demonstration
Survivors:
Yes
Site:
Lake, Sea, Ocean, River
MSN:
11074
YOM:
1941
Location:
Plymouth
Devon
Country:
United Kingdom
Region:
Europe
Crew on board:
4
Crew fatalities:
Pax on board:
3
Pax fatalities:
Other fatalities:
Total fatalities:
0
Circumstances:
The Catalina was one of two that arrived that morning in celebration of the first transatlantic flight by a Curtis NC-4 aircraft in 1917. The first landed without incident but the 2nd veered off course on landing and hit a temporary buoy before crashing into a heavy permanent navigational buoy that ripped off part of a wing and one of her floats. This caused the aircraft to cartwheel around out of control performing a spectacular 'surface loop'. Luckily she stayed afloat and the people on board were rescued by the occupants of some of the welcoming party's boats. One member of crew was taken to hospital with a gashed leg. The sinking aircraft was kept afloat and towed to the nearby former RAF flying boat base at Mount Batten where she remained in one of the old 'Sunderland' hangars under repair for several months. She eventually flew out of Plymouth Hoe on the return leg of the transatlantic flight towards the end of the year. 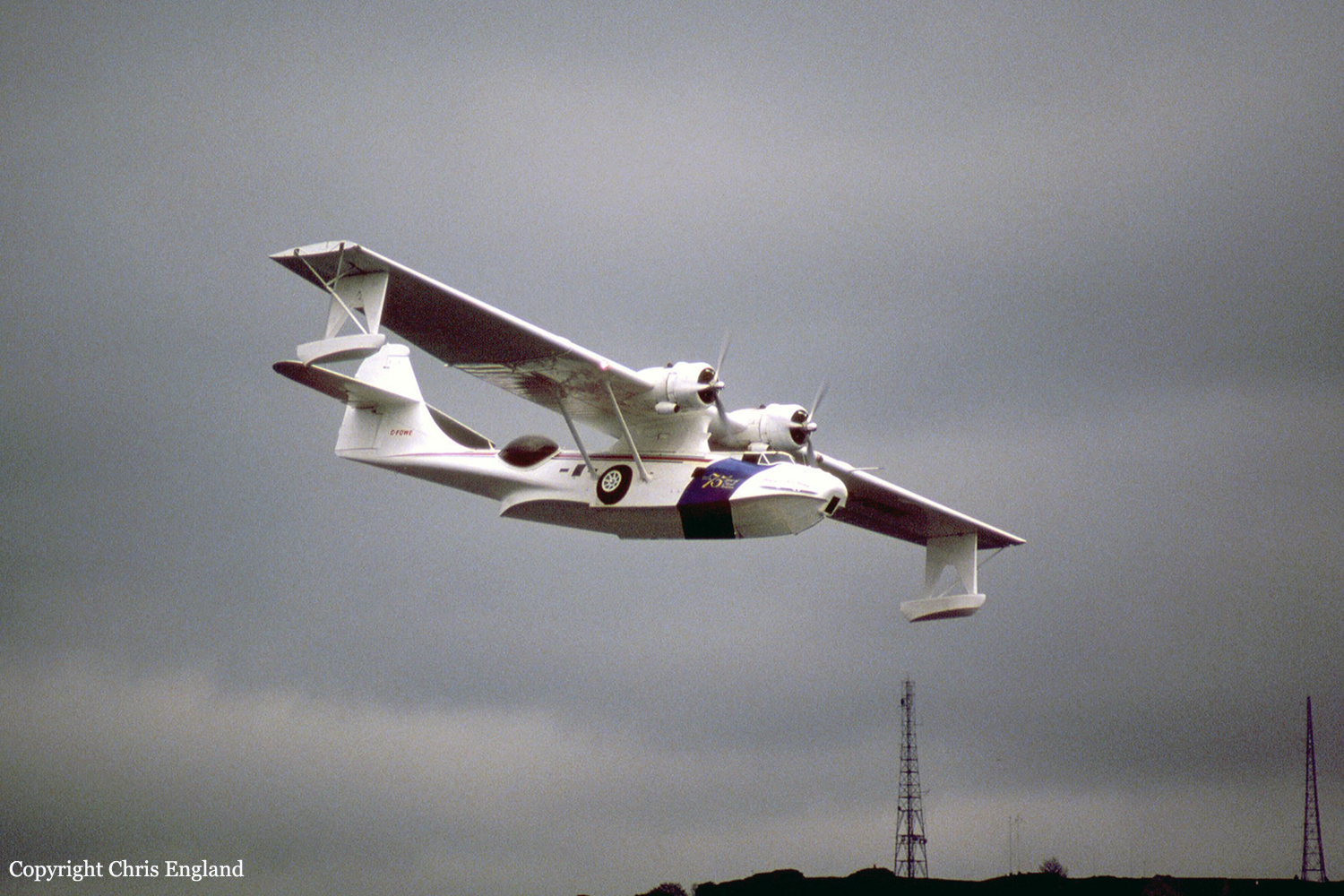 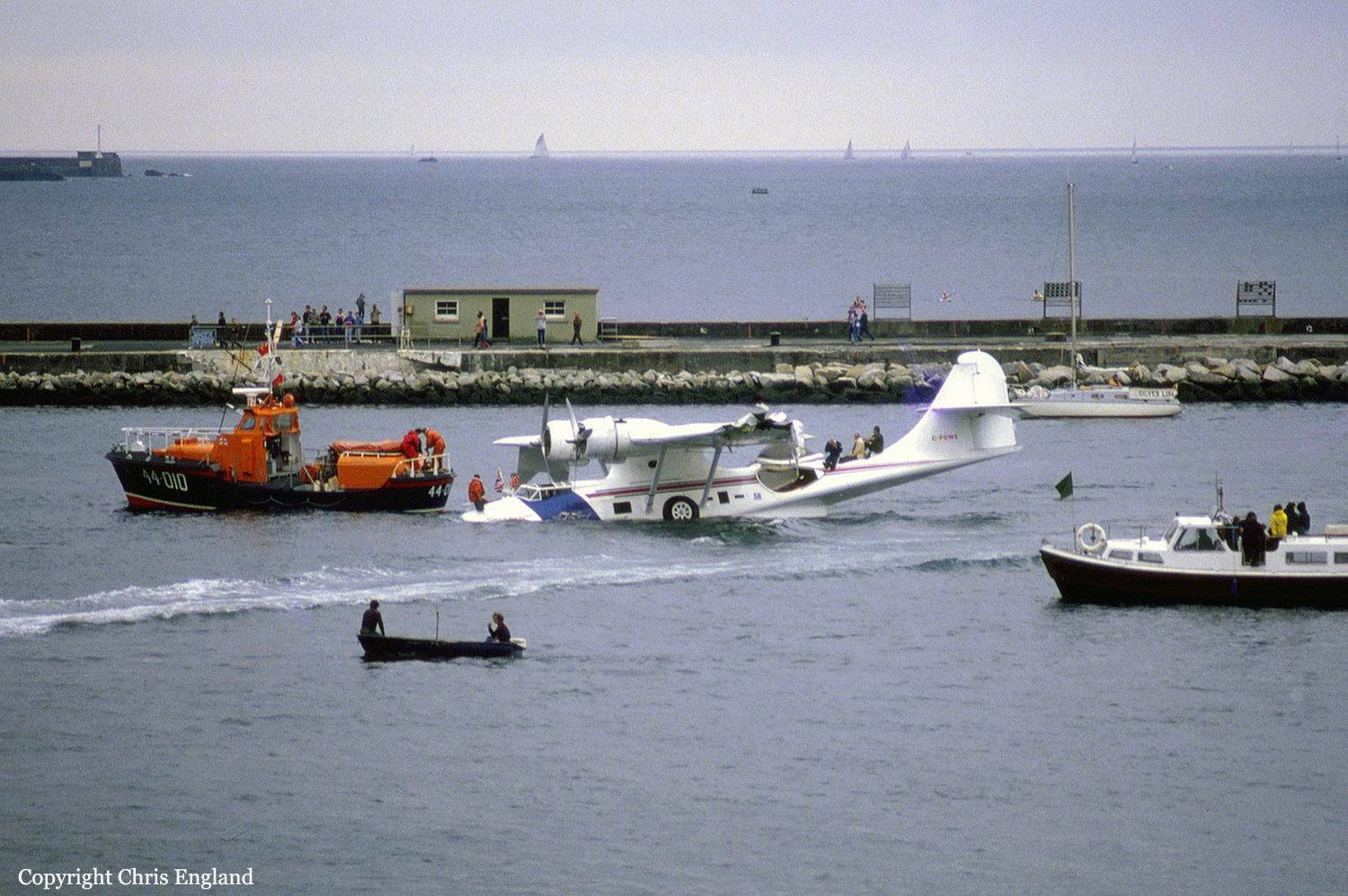 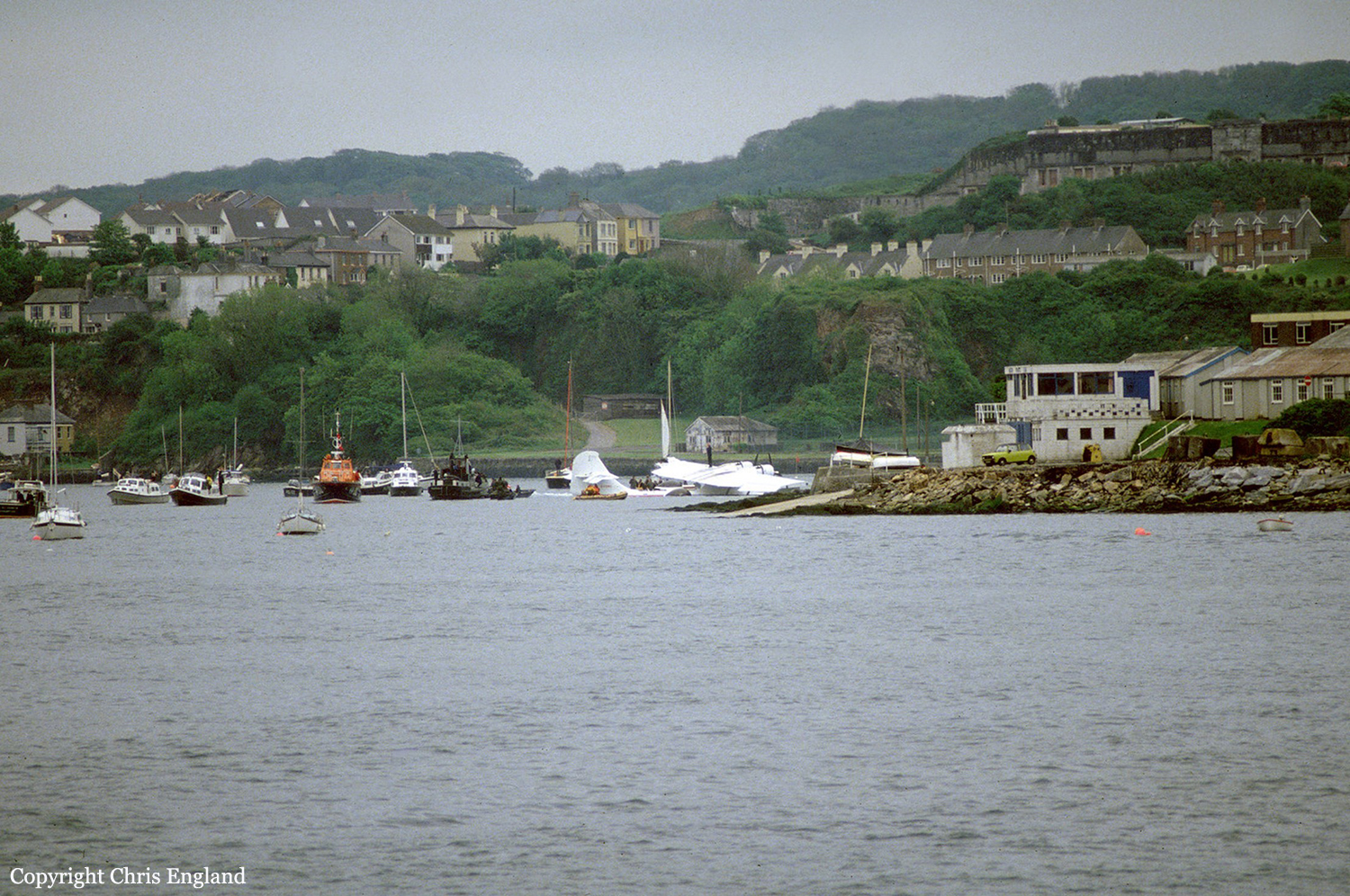 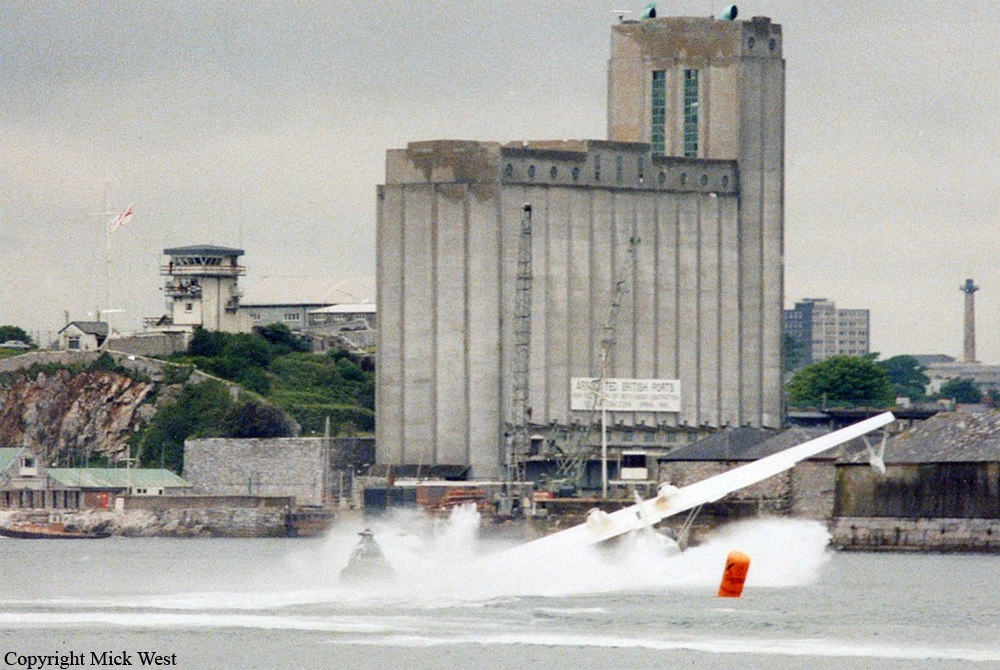 Crash of a Vickers Viscount in Exeter 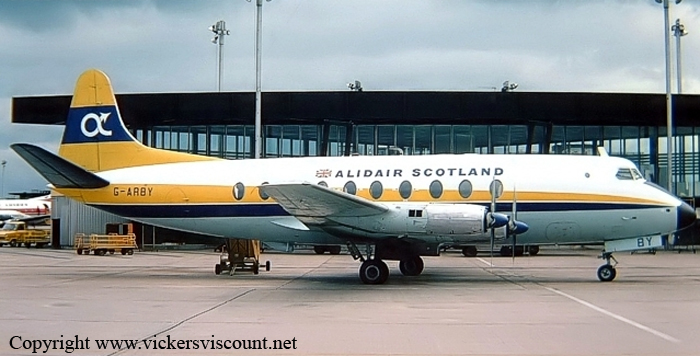 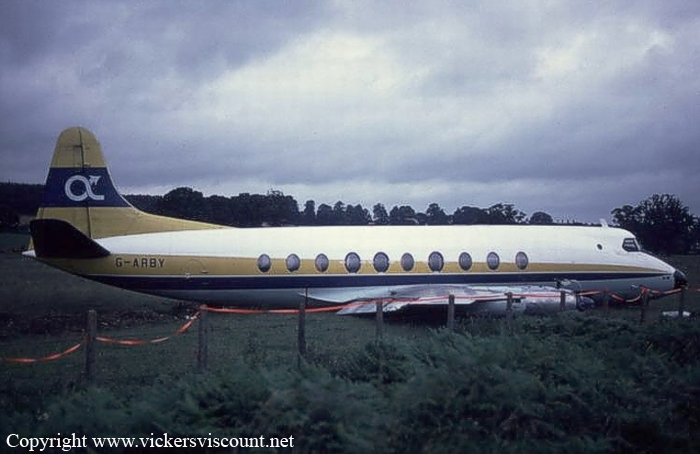 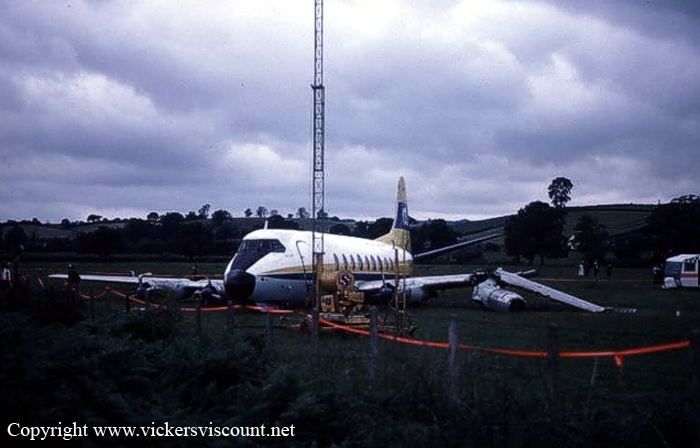 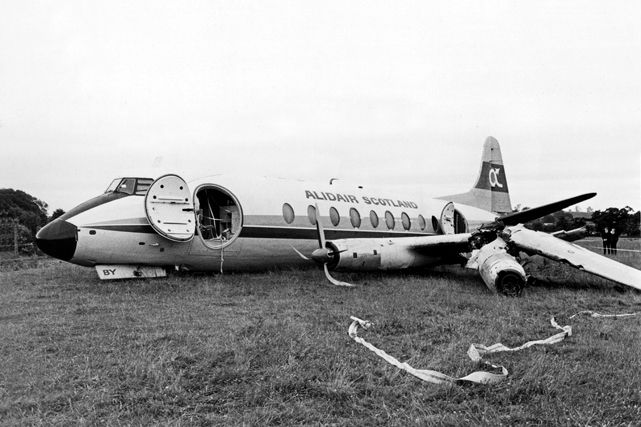 Registration:
VM308
Flight Phase:
Landing (descent or approach)
Flight Type:
Training
Survivors:
Yes
Site:
Airport (less than 10 km from airport)
Location:
Roborough AFB
Devon
Country:
United Kingdom
Region:
Europe
Crew on board:
2
Crew fatalities:
Pax on board:
0
Pax fatalities:
Other fatalities:
Total fatalities:
0
Circumstances:
The crew was completing a training mission from RAF Debden. On approach to RAF Roborough in marginal weather conditions, the pilot made a mistake with the heading settings (error of 20°). On short final, he realized he was not properly aligned with the runway and elected to make a last-second correction to avoid an ambulance parking when the airplane crashed and came to rest in a boundary fence. Both pilots were slightly injured and the aircraft was damaged beyond repair.
Probable cause:
Wrong approach configuration on part of the flying crew. It was also reported that RAF Roborough is difficult to access, poorly equipped and its runway is considered as too short.

Ground accident of an Avro 652 Anson T.22 at RAF Chivenor

Registration:
VV362
Flight Phase:
Parking
Flight Type:
Ambulance
Survivors:
Yes
Site:
Airport (less than 10 km from airport)
Location:
Chivenor AFB
Devon
Country:
United Kingdom
Region:
Europe
Crew on board:
2
Crew fatalities:
Pax on board:
2
Pax fatalities:
Other fatalities:
Total fatalities:
0
Circumstances:
After taxiing in at RAF Chivenor, Devon, an ambulance was reversed in front of it to transfer a patient from the Anson. The pilot increased rpm to prevent oiling the plugs but the aircraft moved forward and struck the ambulance. The fuselage was twisted and the tail damaged. There were no injuries.

Crash of an Airspeed AS.10 Oxford I in Exeter

Registration:
PH318
Flight Phase:
Landing (descent or approach)
Flight Type:
Training
Survivors:
Yes
Site:
Airport (less than 10 km from airport)
Schedule:
Exeter - Exeter
MSN:
4148
Location:
Exeter
Devon
Country:
United Kingdom
Region:
Europe
Crew on board:
2
Crew fatalities:
Pax on board:
0
Pax fatalities:
Other fatalities:
Total fatalities:
0
Circumstances:
The crew was engaged in a local training sortie at Exeter Airport. After landing, the twin engine aircraft encountered difficulties to stop, overran, lost its undercarriage and came to a halt in a field. Both pilots were unhurt while the aircraft was damaged beyond repair.
Probable cause:
Wrong approach configuration on part of the flying crew who completed the landing at an excessive speed in full flap configuration and in strong cross winds conditions. 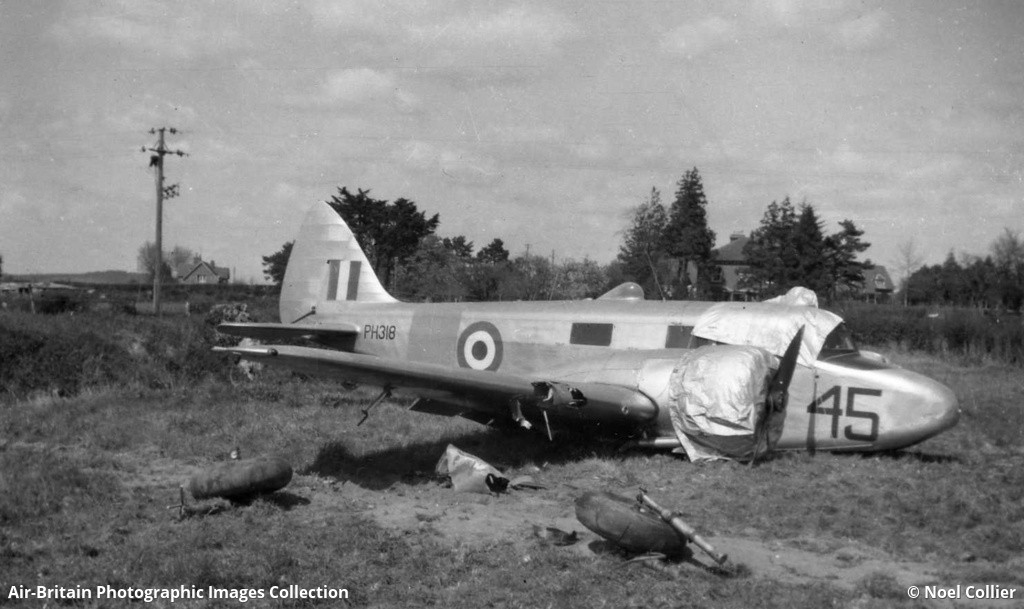 Crash of a Vickers 668 Varsity T.1 in Colyton 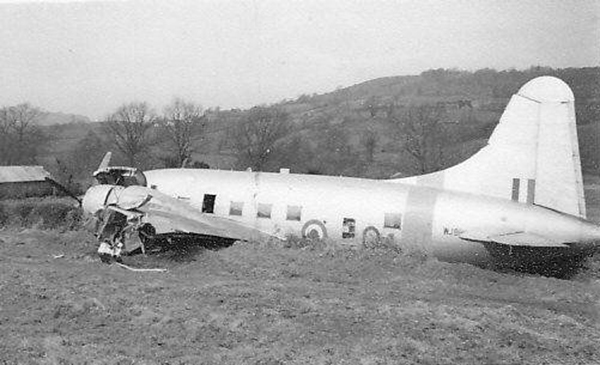 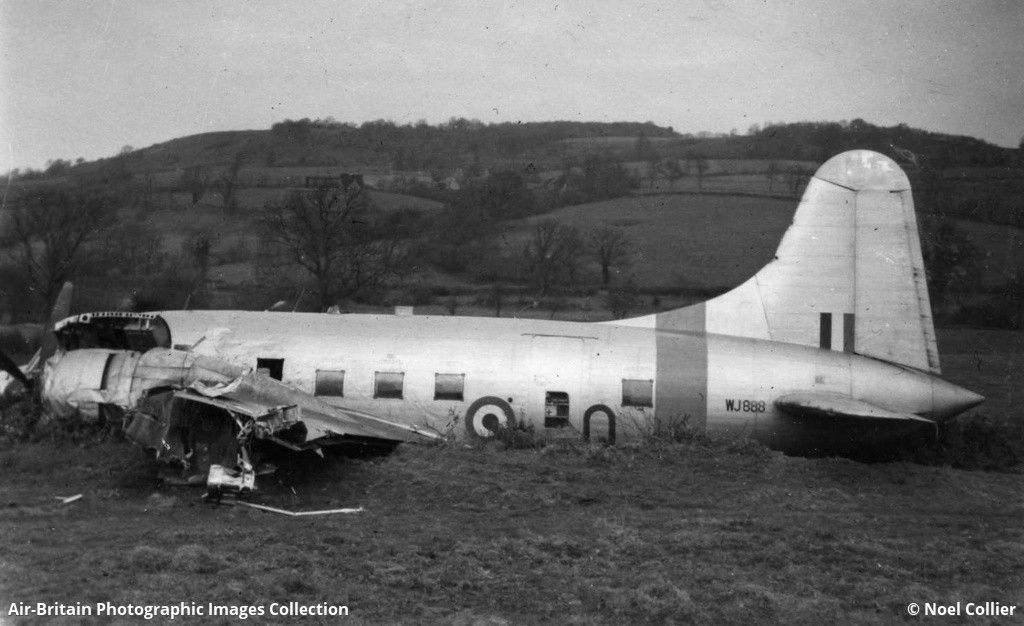 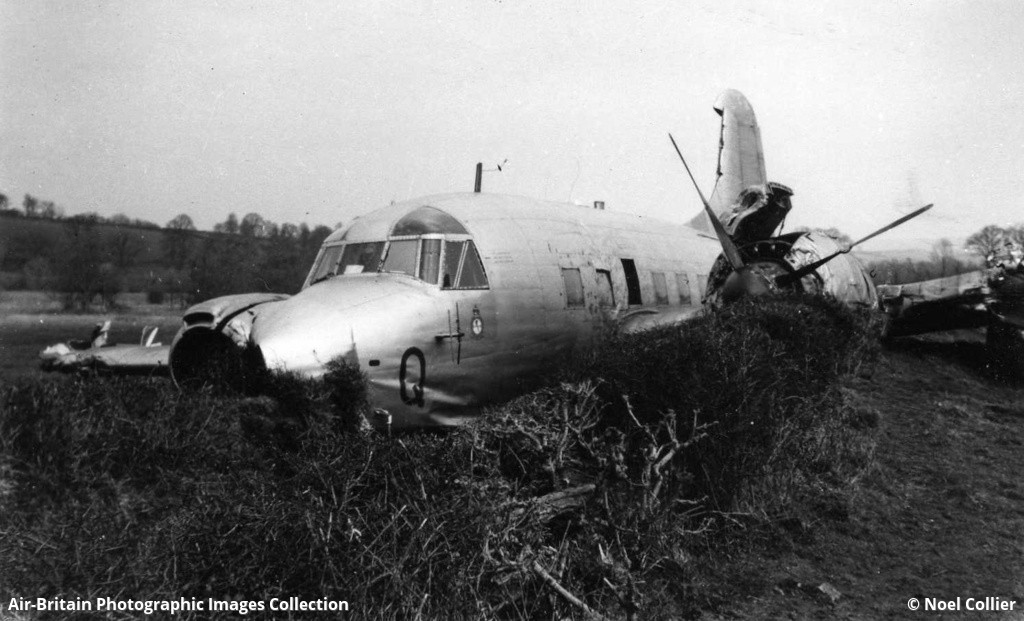