Crash of a De Havilland DHC-2 Beaver I on Mt Kahiltna: 5 killed 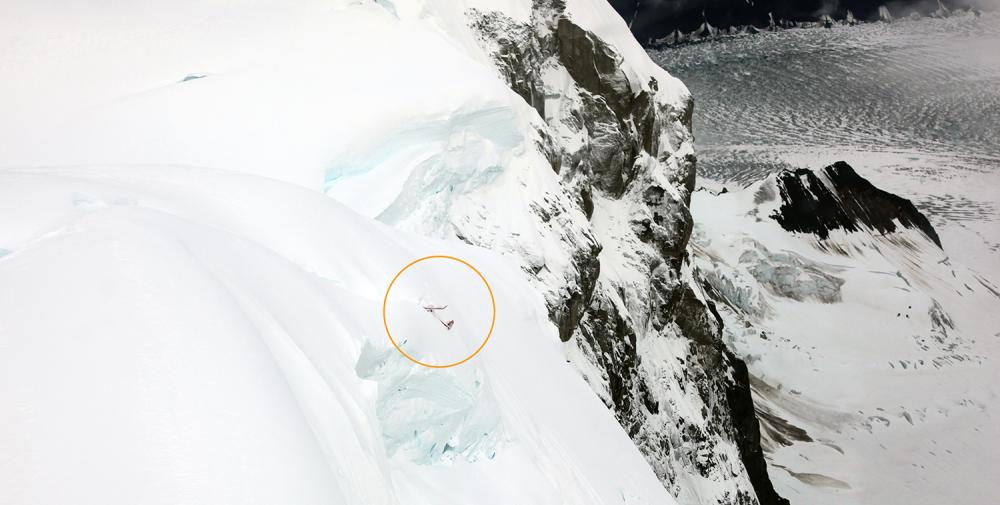 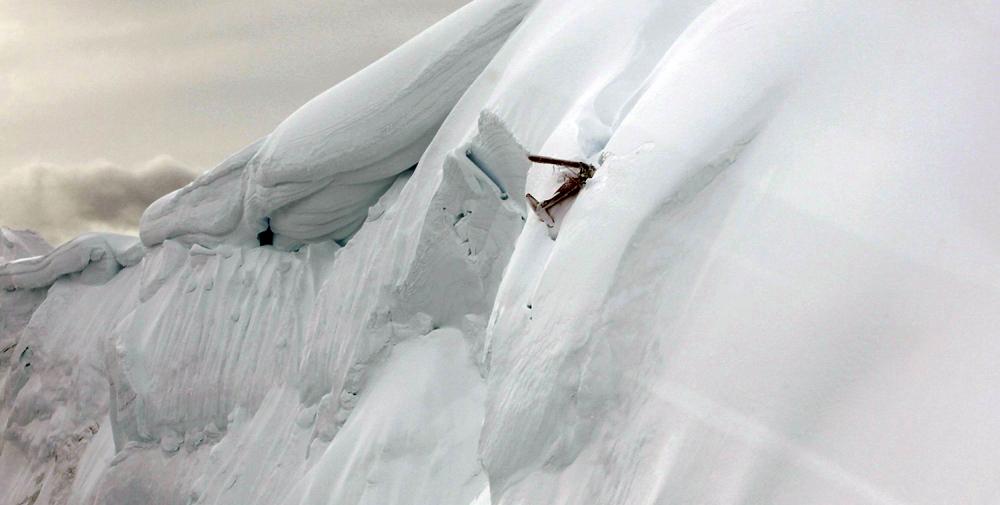 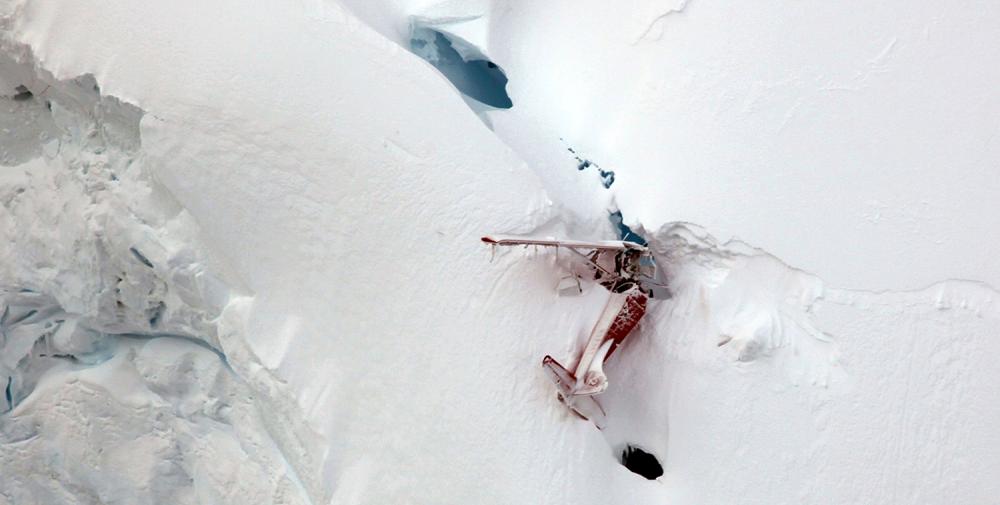 Registration:
N323KT
Flight Phase:
Flight
Flight Type:
Charter/Taxi (Non Scheduled Revenue Flight)
Survivors:
No
Site:
Mountains
Schedule:
Talkeetna - Talkeetna
MSN:
1022
YOM:
1957
Location:
Mt Kahiltna
Alaska
Country:
United States of America
Region:
North America
Crew on board:
1
Crew fatalities:
1
Pax on board:
4
Pax fatalities:
4
Other fatalities:
0
Total fatalities:
5
Circumstances:
On August 4, 2018, about 1753 Alaska daylight time, a single-engine, DHC-2 Beaver airplane, N323KT, sustained substantial damage during an impact with steep, high altitude, snow-covered terrain about 50 miles northwest of Talkeetna, Alaska, in Denali National Park and Preserve. The airplane was registered to Rust Properties, LLC and operated by Rust's Flying Service Inc, doing business as K2 Aviation as a visual flight rules on-demand commercial air tour flight, under the provisions of Title 14 Code of Federal Regulations Part 135 when the accident occurred. The commercial pilot and four passengers sustained fatal injuries. Visual meteorological conditions prevailed, and company flight following procedures were in effect. The flight originated at the Talkeetna Airport (TKA) about 17:05. According to K2 Aviation, the purpose of the flight was to provide the four passengers a one-hour tour flight. This tour was to consist of an aerial tour of multiple glaciers, which included a flyover of the Denali Base Camp located on the Kahiltna Glacier, at 7,200 feet mean sea level (msl), and then return to Talkeetna. According to archived global positioning system (GPS) track data from K2 Aviation's in-flight tracking system, at 1746, as the flight passed over the Denali Base Camp, the airplane initially turns south, and travels down the Kahiltna Glacier. As the flight progressed southbound, it then turns to the left, and towards Talkeetna on a southeasterly heading. As the airplane continues on the southeasterly heading, the track terminates near a knife-edge ridge above the Kahiltna Glacier on Thunder Mountain. At 1753, the Alaska Rescue Coordination Center (RCC) received the first alert from the accident airplane's 406 MHz emergency locator transmitter (ELT). At 1756, K2 Aviation was alerted that the accident airplane's satellite tracking had stopped moving, and lost aircraft procedures were immediately initiated. About 1800, a satellite phone call from the accident pilot was received by personnel at K2 Aviation. The pilot stated that they had impacted a mountain and needed rescue. The call only lasted a couple minutes before the connection was lost. After several attempts, contact was once again made with the accident pilot, and he stated that he was trapped in the wreckage and there were possibly two fatalities. No further information was received before the connection was once again lost. At 2008, the National Park Service (NPS) high altitude rescue helicopter based in Talkeetna, was dispatched to the coordinates transmitted from the accident airplane's 406 MHz ELT. However, due to continuous poor weather conditions in the area, the helicopter crew was not able to reach the accident site. Search and rescue assets from the National Park Service (NPS), the RCC, the Alaska Air National Guard, the Alaska Army National Guard and the U.S. Army joined in the search and rescue mission. On August 6, about 0717, the crew of the NPS's high altitude rescue helicopter located the airplane wreckage in an ice crevasse, at an altitude of about 10,920 ft msl, on a hanging glacier on Thunder Mountain, which is located about 14 miles southwest of the Denali Summit. The airplane was highly fragmented, and the right wing had separated and fallen several hundred feet below the main wreckage. Subsequently, an NPS mountain rescue ranger was able to access the accident site utilizing a technique known as a short-haul, which allows transport of rescue personnel to otherwise inaccessible sites while suspended beneath a helicopter using a long-line. Once on scene, and while still connected to the helicopter, the ranger was able to locate the deceased pilot and three of the passengers in the forward portion of the fuselage, but the fifth occupant was missing. The fuselage was fractured aft of the trailing edge of the wings, and the fuselage was splayed open with blown, packed snow inside. Rapidly deteriorating weather conditions limited the initial on-scene time to about five minutes. On August 10, NPS launched another short-haul site assessment mission. During this mission, the fifth occupant was located in the aft section of the fuselage and was confirmed deceased. According to NPS management personnel, given the unique challenges posed by the steepness of terrain, ice crevasses, avalanche danger, and the instability of the aircraft wreckage, it was determined that recovery of the occupants remains, and retrieval of the aircraft wreckage, exceed an acceptable level of risk and therefore a recovery will not be attempted.
Probable cause:
Loss of control for unknown reasons. 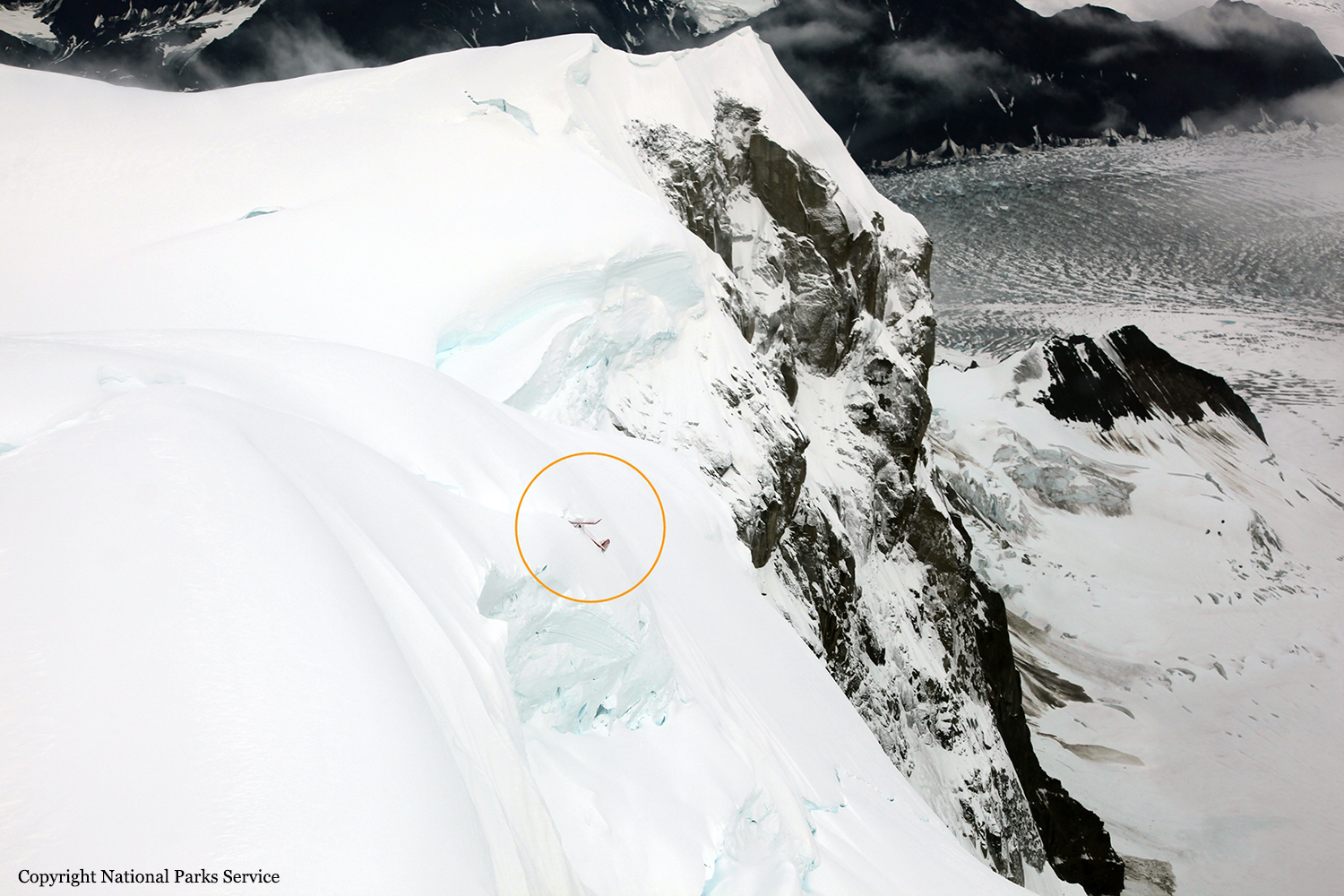 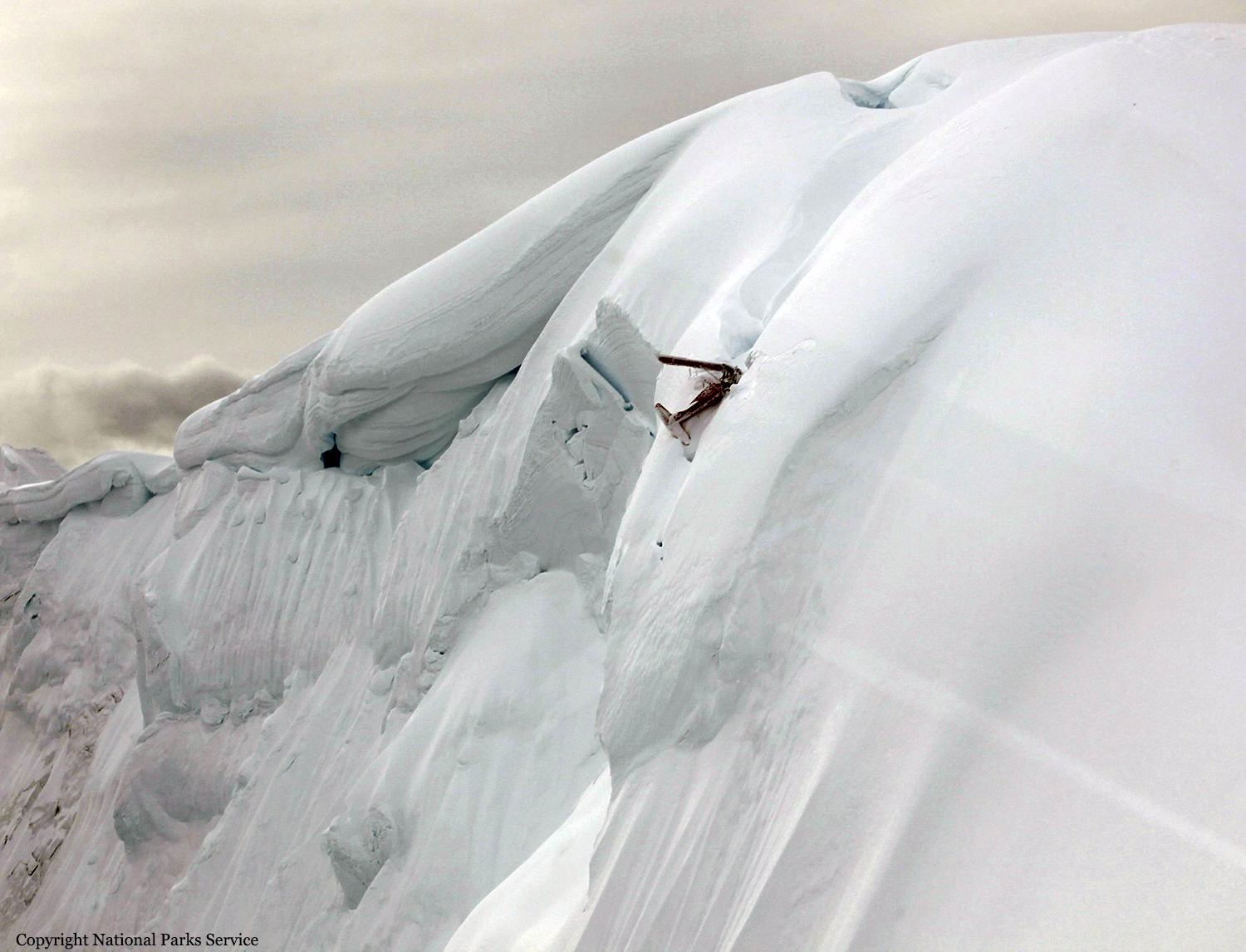 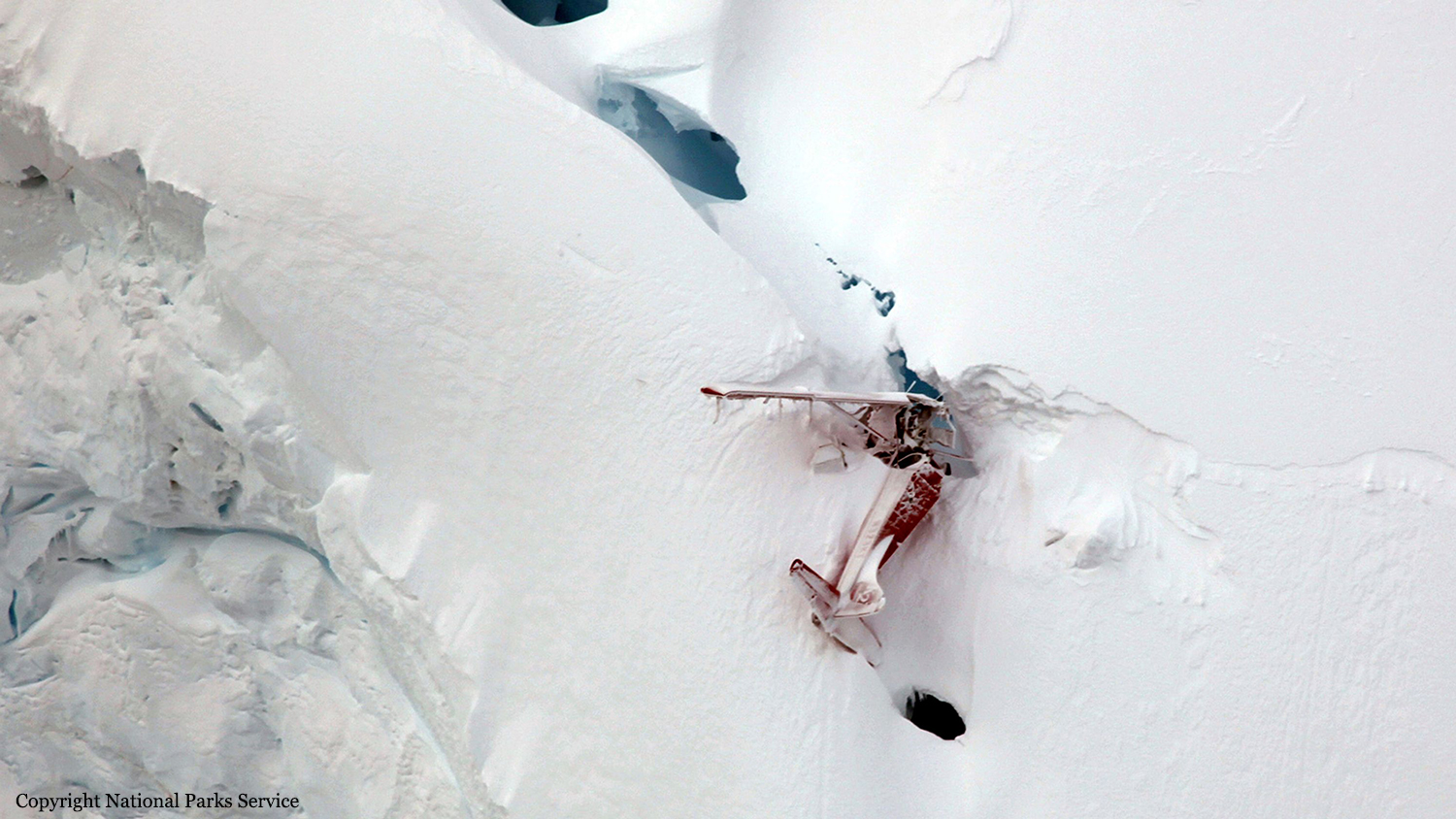