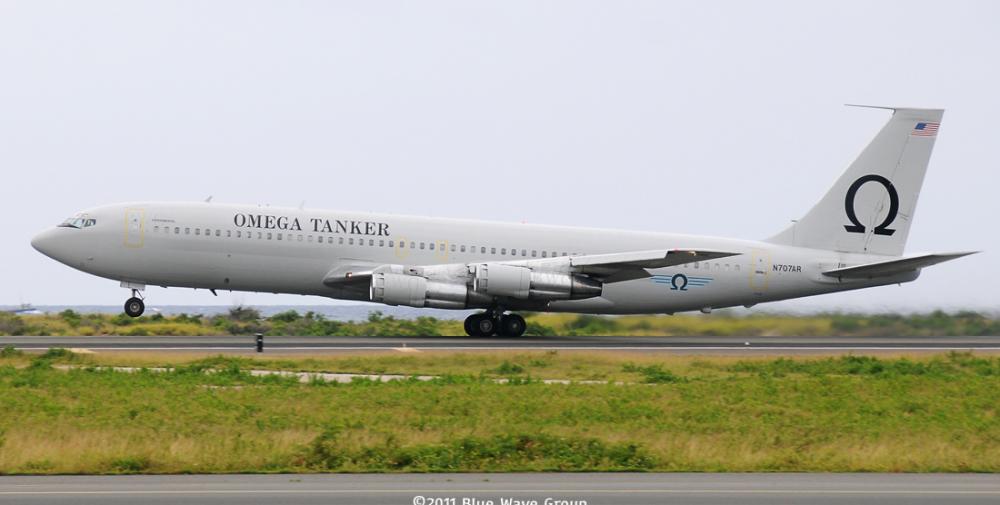 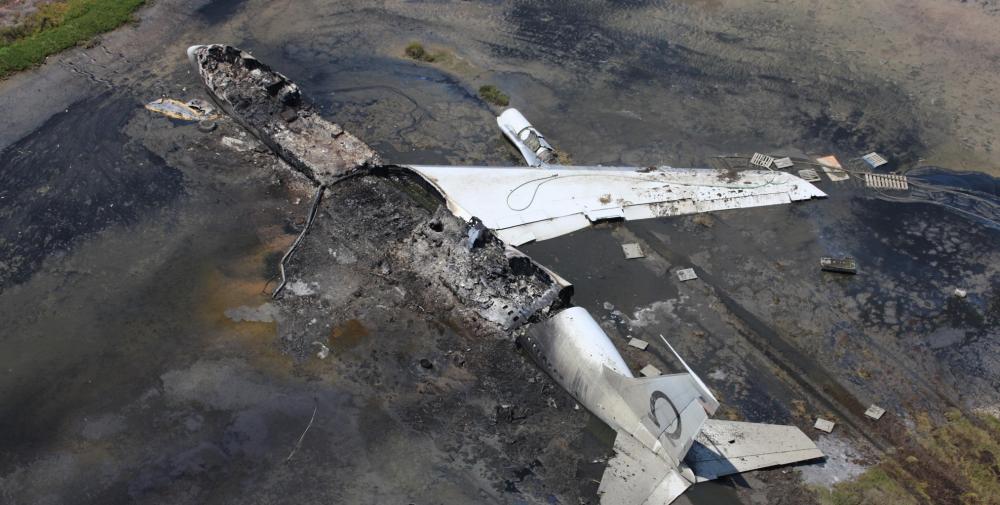 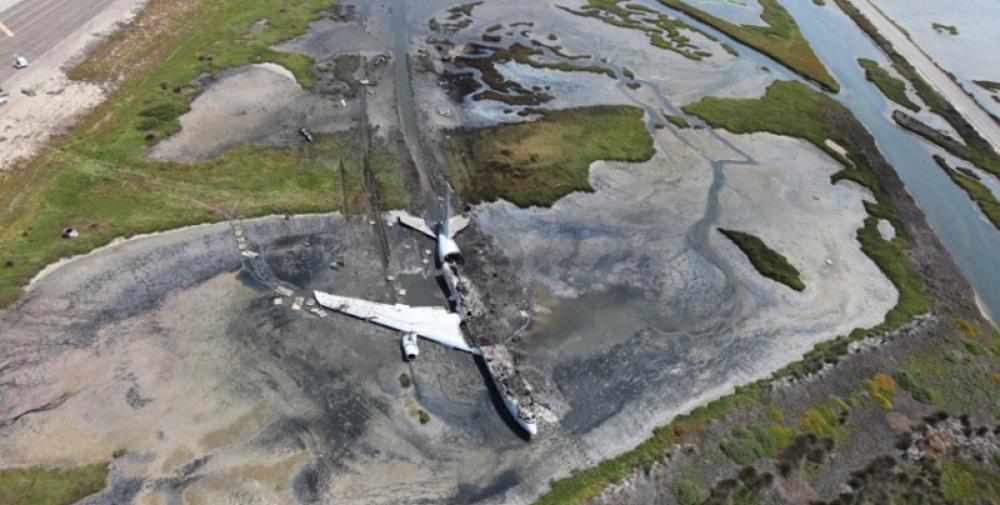 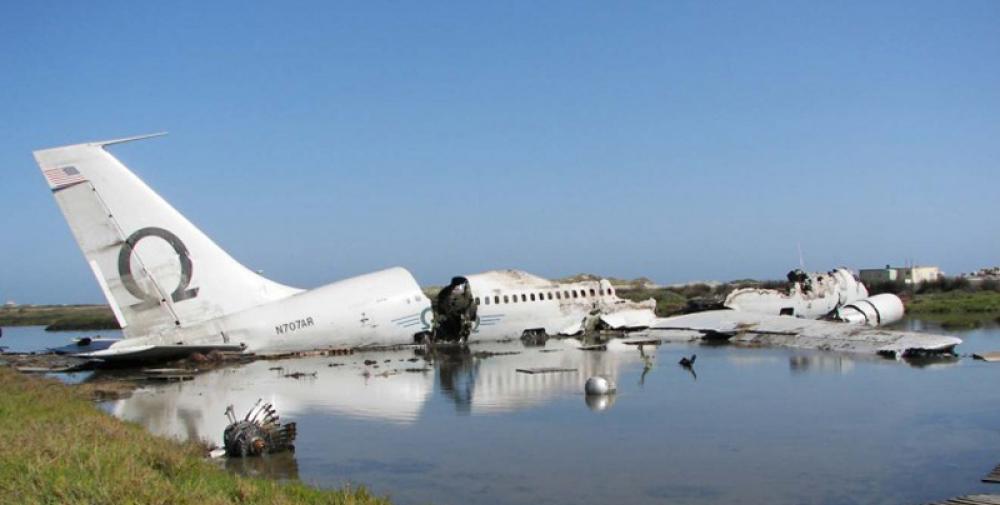 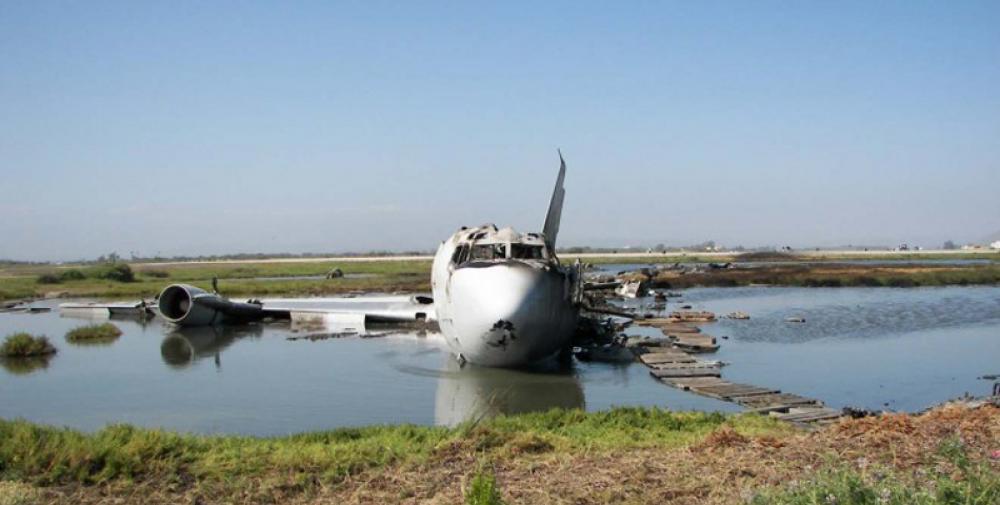 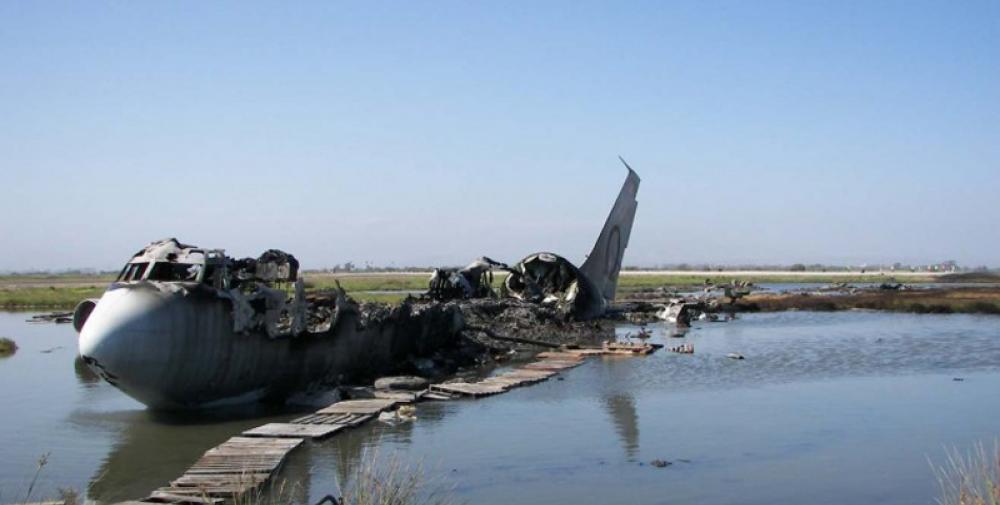 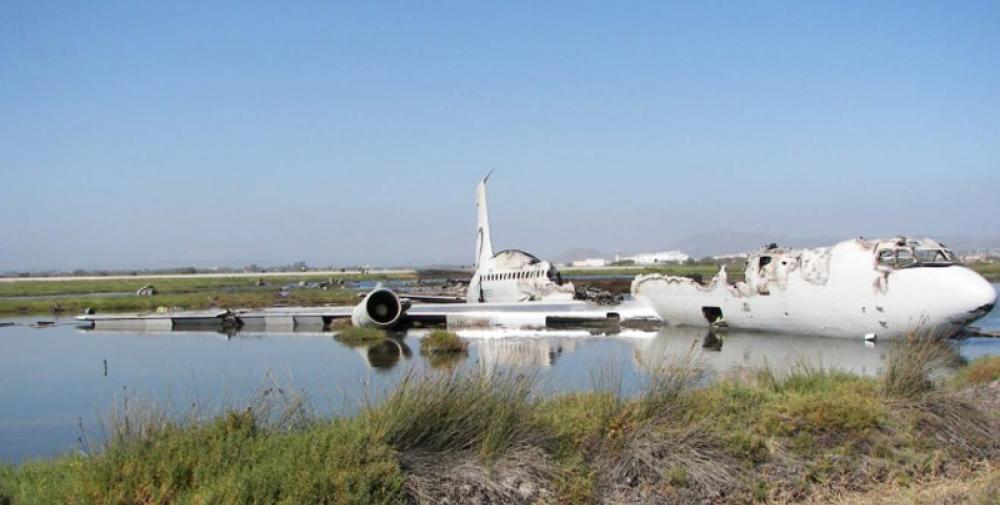 Registration:
N707AR
Flight Phase:
Takeoff (climb)
Flight Type:
Refuelling
Survivors:
Yes
Site:
Airport (less than 10 km from airport)
Schedule:
Point Mugu NAS - Point Mugu NAS
MSN:
20029/790
YOM:
1969
Flight number:
OME70
Location:
Point Mugu NAS
California
Country:
United States of America
Region:
North America
Crew on board:
3
Crew fatalities:
0
Pax on board:
0
Pax fatalities:
0
Other fatalities:
0
Total fatalities:
0
Captain / Total flying hours:
5117
Captain / Total hours on type:
2730
Copilot / Total flying hours:
4052
Copilot / Total hours on type:
2900
Aircraft flight hours:
47856
Aircraft flight cycles:
15186
Circumstances:
On May 18, 2011, about 1727 Pacific daylight time, a modified Boeing 707, registration N707AR, operating as Omega Aerial Refueling Services (Omega) flight 70 crashed on takeoff from runway 21 at Point Mugu Naval Air Station, California (KNTD). The airplane collided with a marsh area to the left side beyond the departure end of the runway and was substantially damaged by postimpact fire. The three flight crewmembers sustained minor injuries. The flight was conducted under the provisions of a contract between Omega and the US Naval Air Systems Command (NAVAIR) to provide aerial refueling of Navy F/A-18s in offshore warning area airspace. According to the Federal Aviation Administration (FAA), Omega, and the US Navy, the airplane was operating as a nonmilitary public aircraft under the provisions of 49 United States Code Sections 40102 and 40125. The accident flight crew consisted of a captain, first officer, and flight engineer who had flown with each other many times previously. The crewmembers reported conducting a normal preflight inspection. As the airplane taxied toward the runway, the reported wind was from 280º magnetic at 24 knots, gusting to 34 knots; the flight crew reported that the windsock showed very little change in the wind direction and a slight amount of gust. The crew had calculated a takeoff decision speed (V1) of 141 knots and a rotation speed (Vr) of 147 knots. The crew elected to add 5 knots to the rotation speed to compensate for the wind gusts and briefed a maximum power takeoff. The first officer, who was the pilot monitoring, stated that he advised the captain, who was the pilot flying, about advancing the power relatively smoothly to avoid a compressor stall with the crosswind, and the captain agreed. About 1723, air traffic control cleared the flight for takeoff from runway 21 and instructed the crew to turn left to a heading of 160º after departure. The captain applied takeoff thrust, and the first officer told investigators that, as the pilot in the right seat, he applied forward pressure on the yoke and right aileron input to compensate for the right crosswind. According to the crew, the takeoff roll was normal. At rotation speed, the captain rotated the airplane to an initial target pitch attitude of 11º airplane nose up. Shortly after liftoff, when the airplane was about 20 feet above the runway and about 7,000 feet down the runway, all three crewmembers heard a loud noise and observed the thrust lever for the No. 2 (left inboard) engine rapidly retard to the aft limit of the throttle quadrant. The captain stated that he applied full right rudder and near full right aileron to maintain directional control and level the wings, but the airplane continued to drift to the left. The captain reported that he perceived the airplane would not continue to climb and decided to “put it back on the ground.” Witnesses and a cell phone video from another Omega 707 crewmember observing the takeoff indicated that the No. 2 (left inboard) engine separated and traveled up above the left wing as the airplane was passing abeam taxiway A2. The inlet cowling for the No. 1 (left outboard) engine separated immediately thereafter, consistent with being struck by the No. 2 engine nacelle. The airplane began to descend with the remaining three engine power levers at maximum power, and the left wing dipped slightly (Pratt & Whitney indicated that loss of the inlet cowling on the No. 1 engine would increase drag, effectively resulting in less than zero thrust output). The captain said he lowered the nose and leveled the wings just as the airplane touched down on the runway between taxiway A2 and A1. The airplane made multiple contacts with the runway before drifting left and departing the runway surface before the airplane reached taxiway A1. The airplane crossed taxiway A and came to rest in the marsh area. According to the flight crewmembers, they observed flames in the cabin area and did not have time to perform an engine shutdown or evacuation checklist. The crew reported difficulty exiting the cockpit due to mud and debris blocking the cockpit door. All three crewmembers successfully evacuated through the left forward entrance via the escape slide.
Probable cause:
The NTSB determines that the probable cause of this accident was the failure of a midspar fitting, which was susceptible to fatigue cracking and should have been replaced with a newer, more fatigue-resistant version of the fitting as required by an airworthiness directive. Also causal was an erroneous maintenance entry made by a previous aircraft owner, which incorrectly reflected that the newer fitting had been installed.
Final Report:
N707AR.pdf734.1 KB 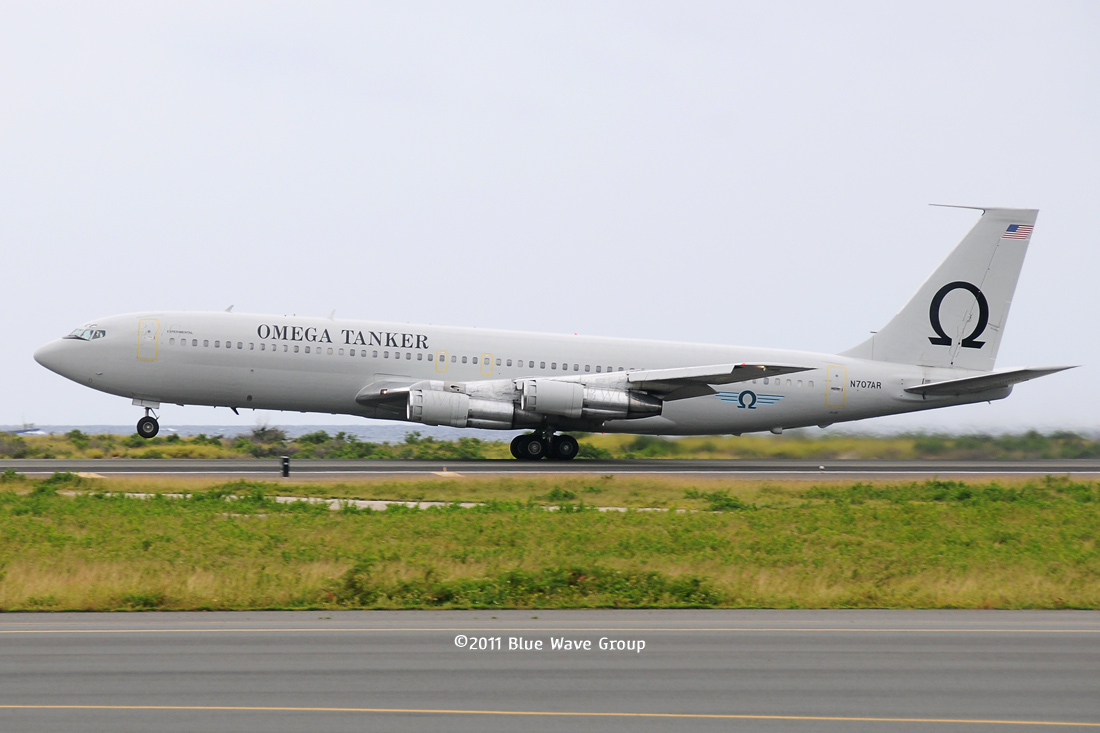 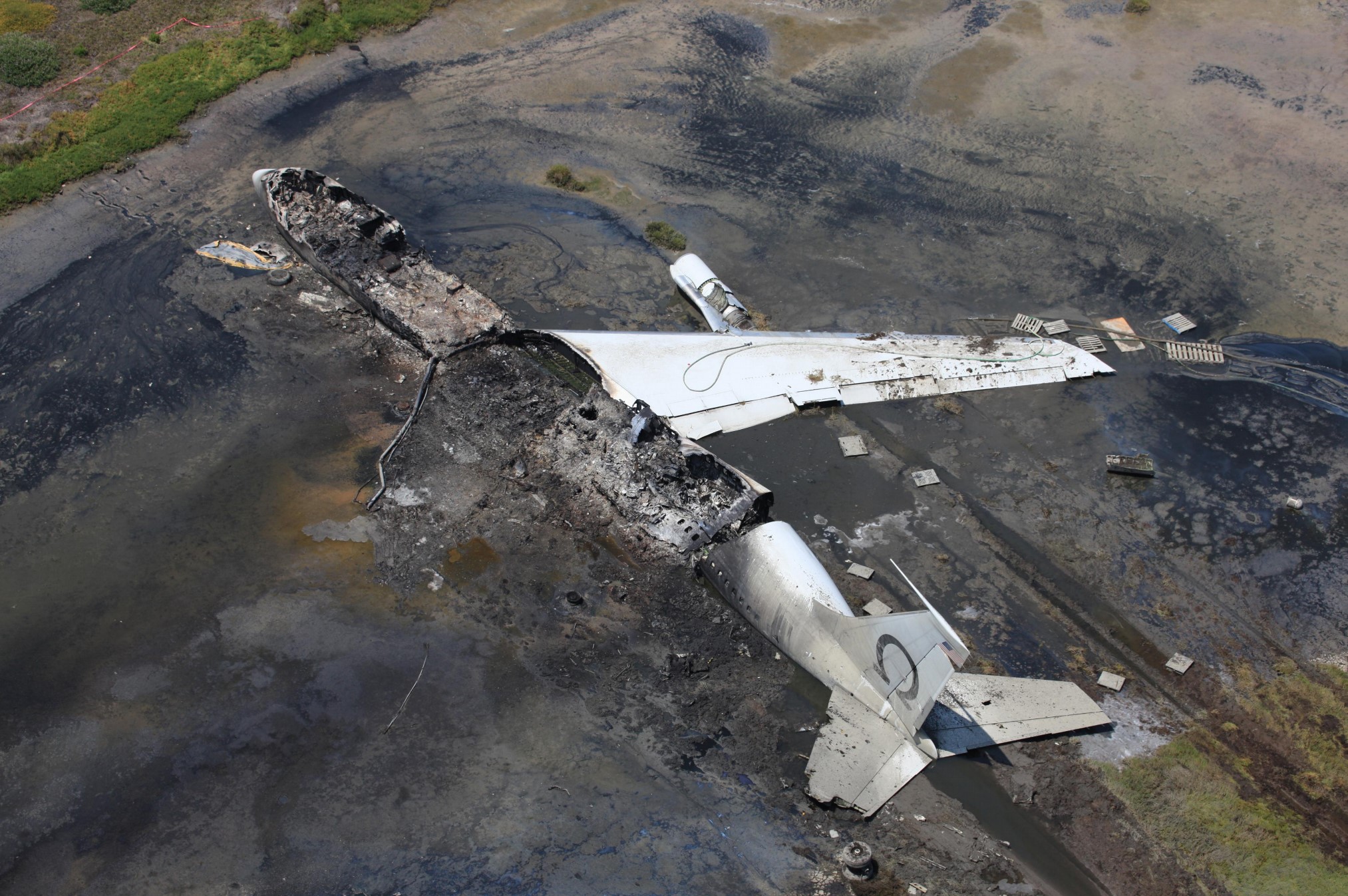 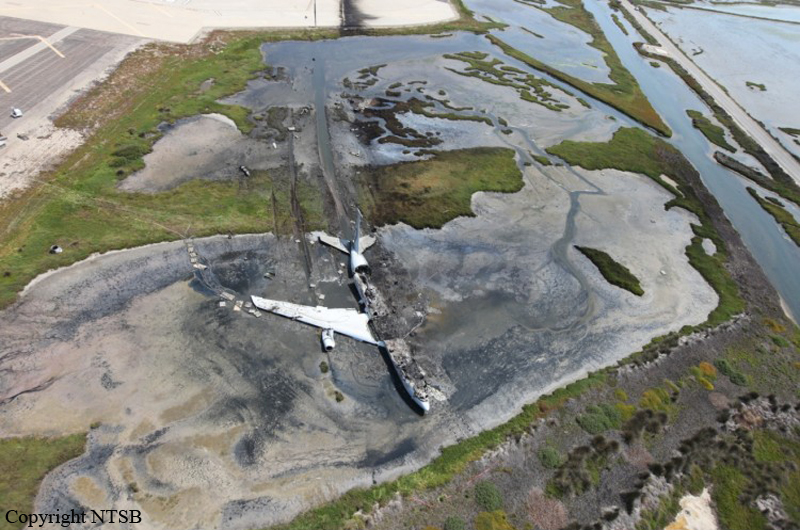 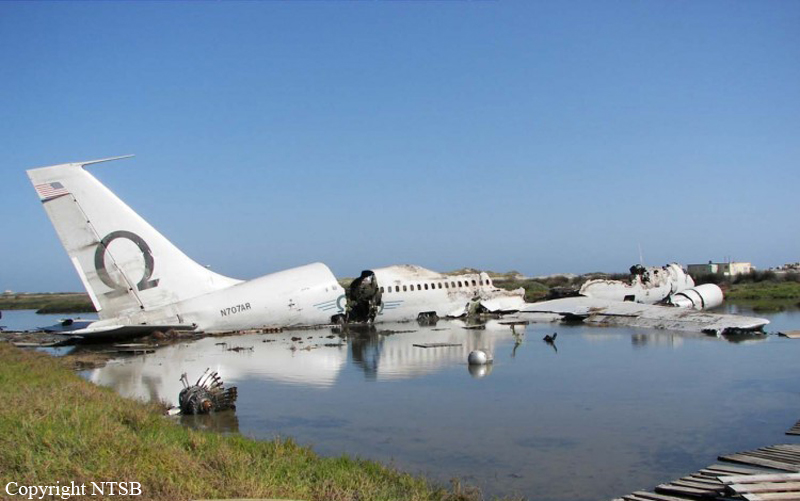 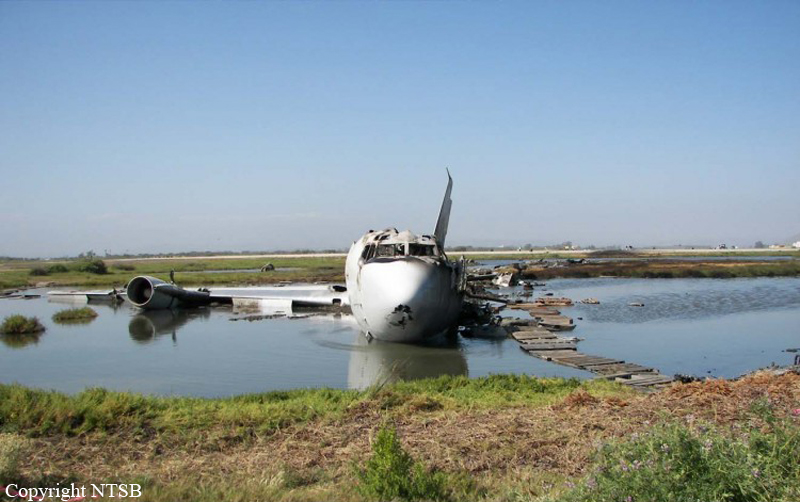 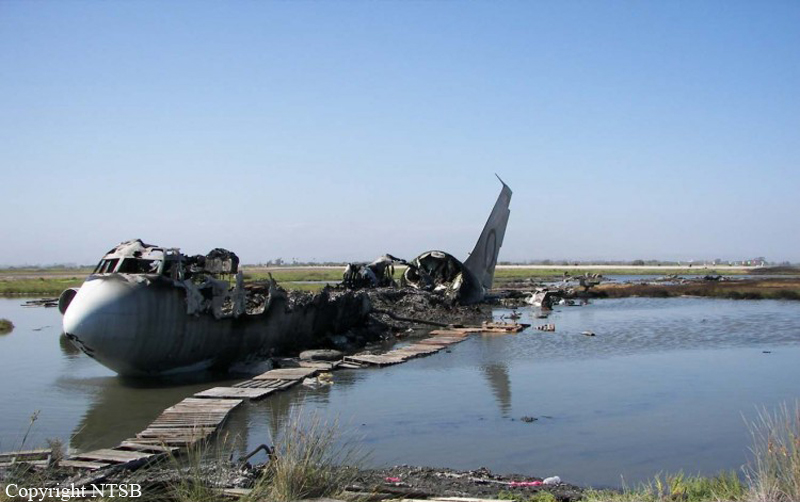 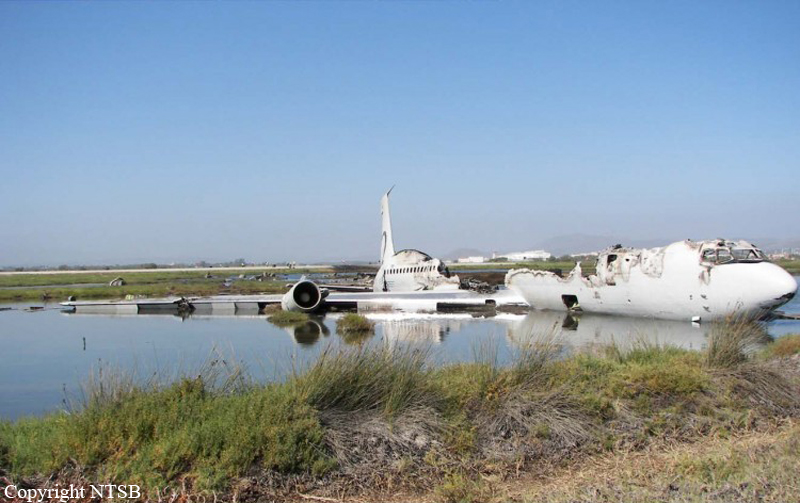