Crash of a Cessna 680A Citation Latitude in Elizabethton

Registration:
N8JR
Flight Phase:
Landing (descent or approach)
Flight Type:
Private
Survivors:
Yes
Site:
Airport (less than 10 km from airport)
Schedule:
Statesville - Elizabethton
MSN:
680A-0010
YOM:
2015
Location:
Elizabethton
Tennessee
Country:
United States of America
Region:
North America
Crew on board:
2
Crew fatalities:
Pax on board:
3
Pax fatalities:
Other fatalities:
Total fatalities:
0
Aircraft flight hours:
1165
Circumstances:
On August 15, 2019, about 1537 eastern daylight time, a Textron Aviation Inc. 680A, N8JR, was destroyed during a runway excursion after landing at Elizabethton Municipal Airport (0A9), Elizabethton, Tennessee. The airline transport-rated pilot and copilot were not injured. The three passengers sustained minor injuries. The airplane was registered to JRM Air LLC and operated under the provisions of Title 14 Code of Federal Regulations Part 91 as a business flight. Day, visual meteorological conditions prevailed, and no flight plan was filed for the flight. The flight originated at Statesville Regional Airport (SVH), Statesville, North Carolina at 1519 and was destined for 0A9. According to the flight crew, the flight departed SVH under visual flight rules and climbed to 12,500 ft. No air traffic control services were requested. The preflight, departure, and en route portions of the flight were routine. Approaching 0A9, the crew announced their intentions to
land on runway 24 via the airport's common traffic advisory frequency Airport surveillance video captured the initial touchdown, which occurred near the runway touchdown zone, and portions of the accident sequence. The airplane bounced twice, then continued airborne down runway 24 until it touched down a third time with about 1,000 ft of paved surface remaining. The video revealed that the right main landing gear collapsed and the outboard section of the right wing contacted the runway shortly after the third touchdown. The airplane departed the paved surface beyond the runway 24 departure end threshold, through an open area of grass, down an embankment, through a chain-link fence, and up an embankment, coming to rest on the edge of Tennessee Highway 91. The pilots' account of the landing was generally consistent with the video. The pilots also reported that, following the second bounce, a go-around was attempted; however, the airplane did not respond as expected, so they landed straight-ahead on the runway and could not stop the airplane prior to the excursion. After the airplane came to a stop, the flight crew secured the engines and assisted the passengers with the evacuation. The main entry door was utilized to exit the airplane. A postaccident fire was in progress during the evacuation. The airplane came to rest upright, on a true heading of 285º. The fuselage aft of the main entry door, the right wing, and the empennage were consumed by the postaccident fire. The left main and nose landing gear were separated from the airframe during the impact sequence. The right main landing gear remained under the right wing and was heavily fire damaged. The airplane, also known as the Citation Latitude, was a low wing, cruciform tail design with twin, fuselage-mounted Pratt and Whitney Canada 360D turbofan engines. It was equipped with two cockpit seats and nine passenger seats. The airplane was built in 2015 and the owner purchased the airplane new. The total time of the airframe was about 1,165 hours. The maximum takeoff weight was 31,025 lbs. The cockpit, which was undamaged by fire, was equipped with a Garmin G5000 advanced integrated flight deck (flat screen displays and touch screen controls) that recorded numerous flight and systems parameters. The data was successfully downloaded following the accident. The airplane was also equipped with a cockpit voice recorder (CVR). The CVR was damaged by the postaccident fire and was sent to the NTSB Vehicle Recorders Laboratory, Washington, DC for examination and download. The pilot, seated in the left cockpit seat and acting as the flying pilot and pilot-in-command,
held an airline transport pilot certificate and a type rating in the accident airplane. He reported 5,800 hours total flight experience, including 765 hours in the accident airplane. His latest recurrent training occurred in October 2018. The copilot, seated in the right cockpit seat, held an airline transport pilot certificate and a type rating in the accident airplane. He reported 11,000 hours total flight experience, including 1,165 hours in the accident airplane. His latest recurrent training occurred in October 2018. The reported weather at 0A9 at 1535 included calm wind, 10 miles visibility, scattered clouds at 4,700 and 5,500 ft, broken clouds at 7,000 ft, and altimeter setting 29.97 inches of mercury. The wreckage was retained for further examination. All five occupants were able to evacuate the cabin before the aircraft would be completely destroyed by fire. Runway 24 is 4,500 feet long with a displaced threshold (LDA is 4,100 feet). Passengers were the US Nascar racer Dale Earnhardt, his wife and daughter. 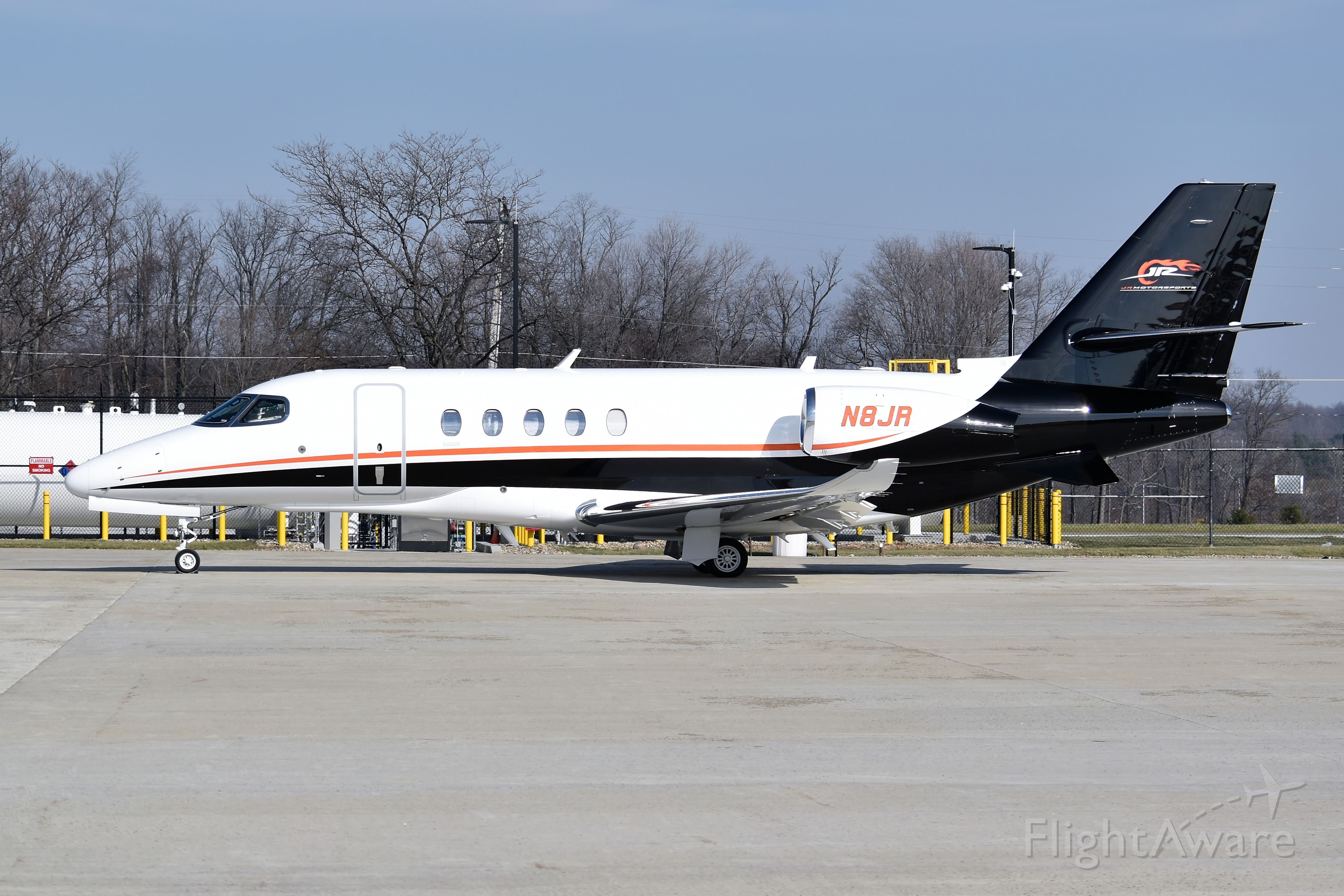 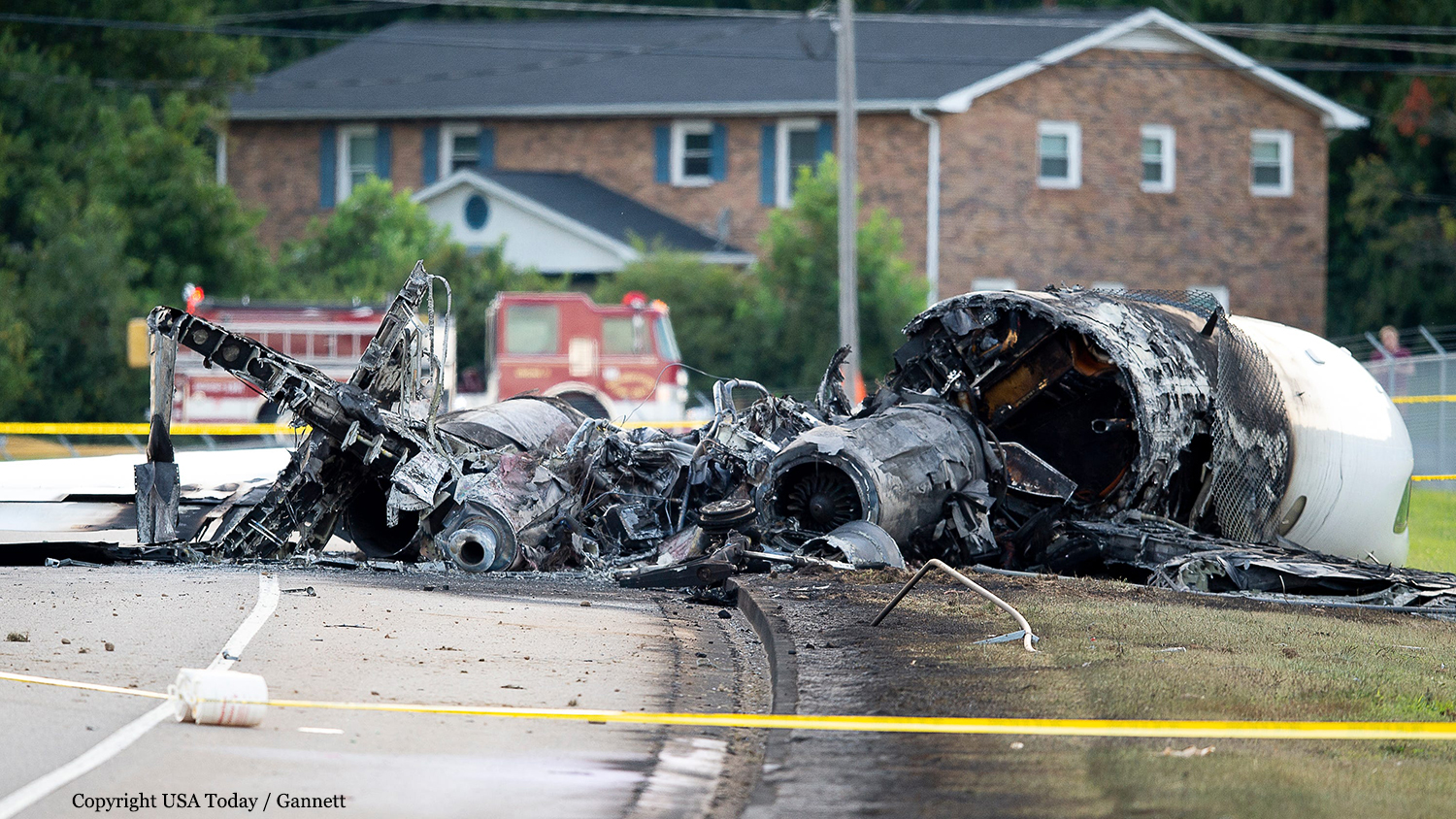 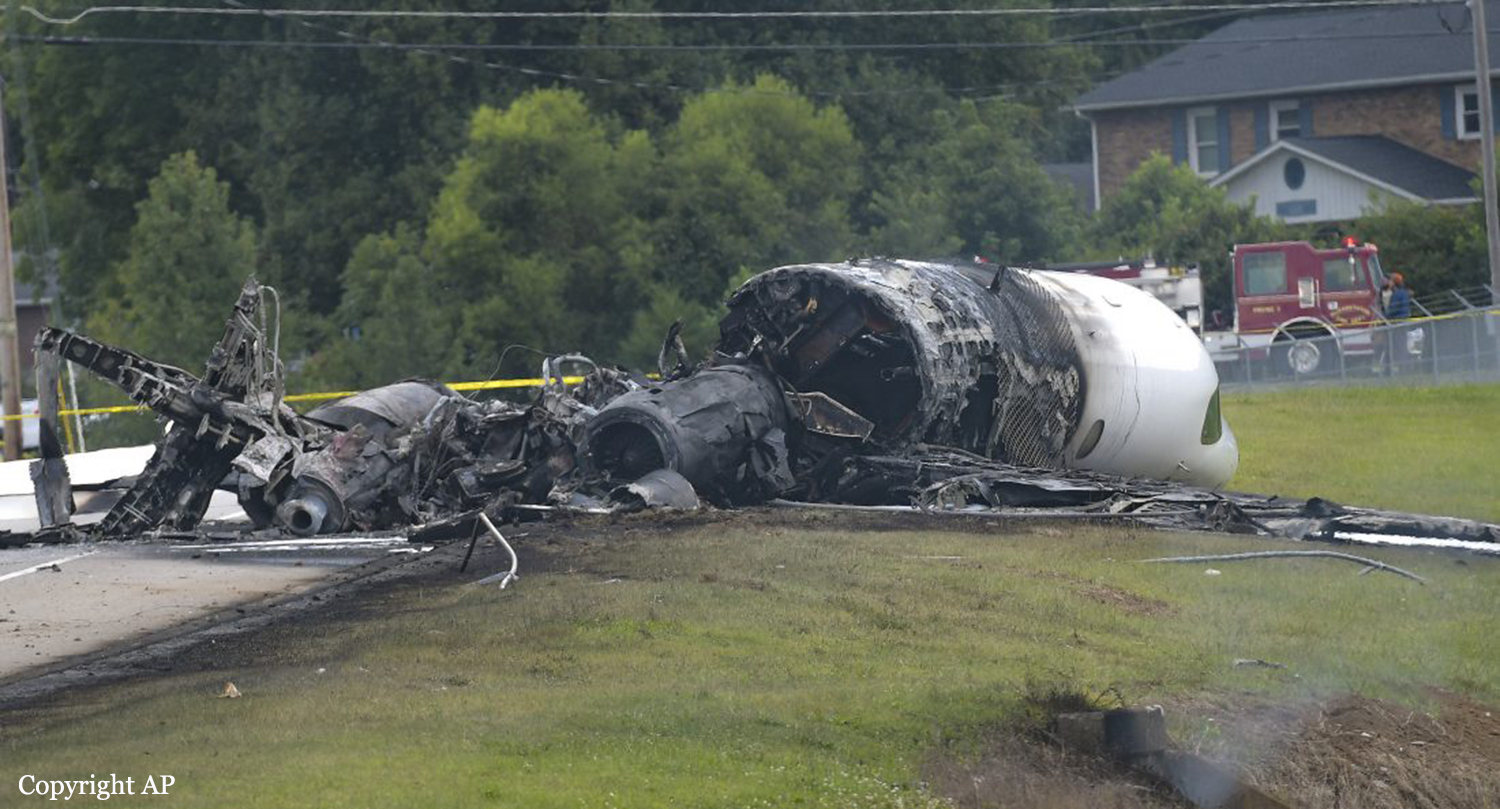 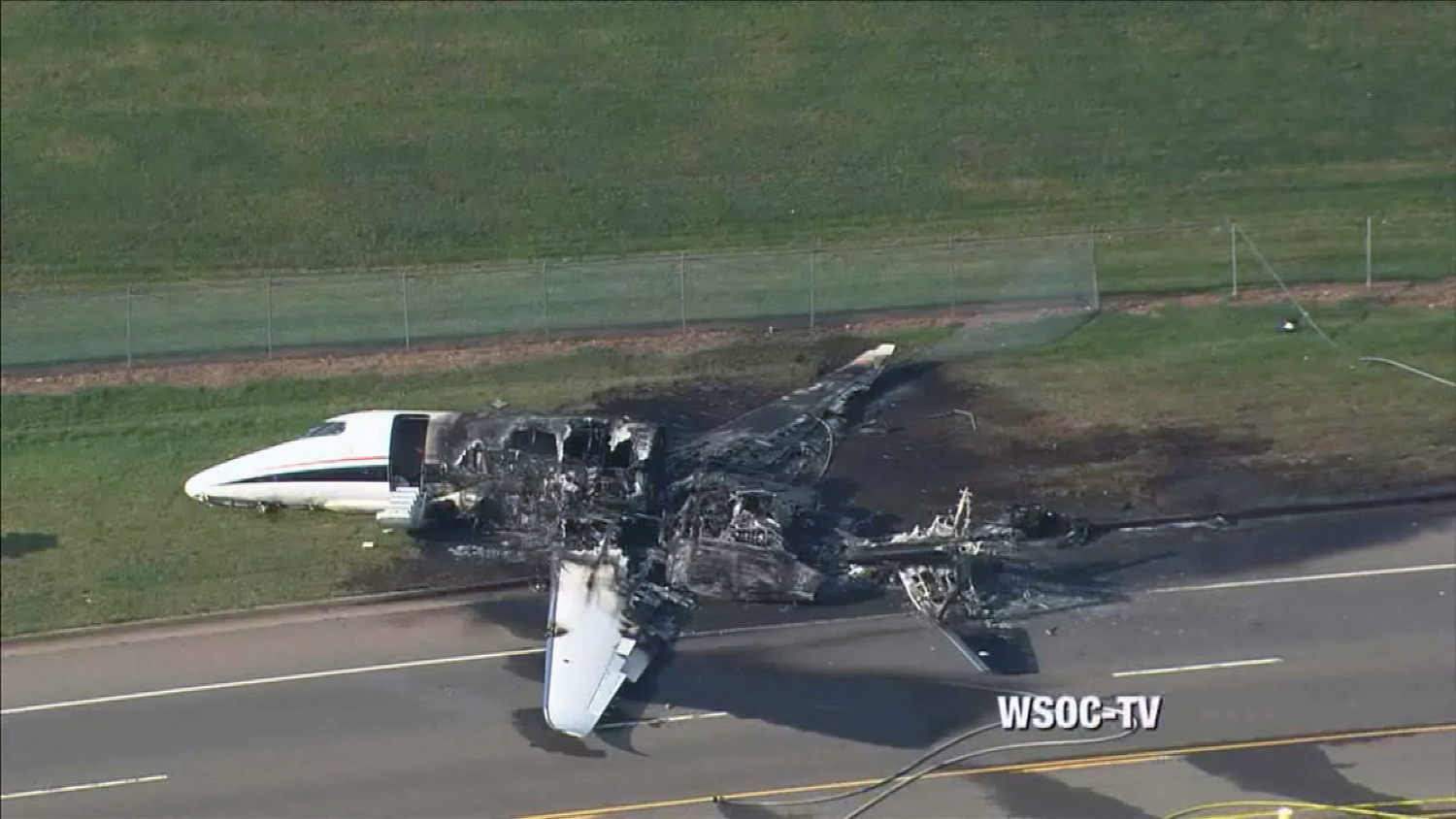 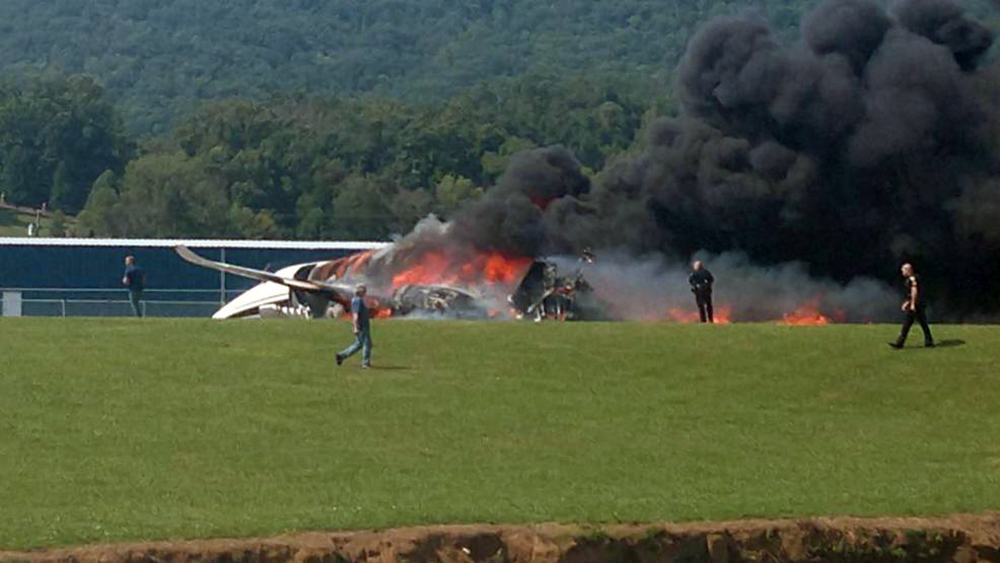